Hi there! You are currently browsing as a guest. Why not create an account? Then you get less ads, can thank creators, post feedback, keep a list of your favourites, and more!
Quick Reply Print version
Search this Thread
Replies: 8005 (Who?), Viewed: 907294 times.
Page 42 of 321
VampireSim

He is a little puppie. He should think of food and toys. 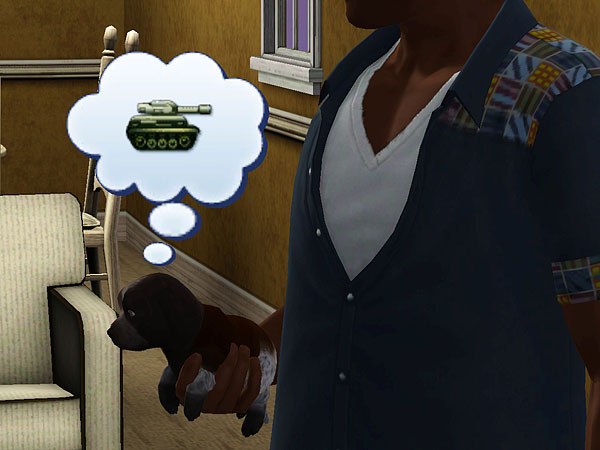 It's never too late to learn new tricks. 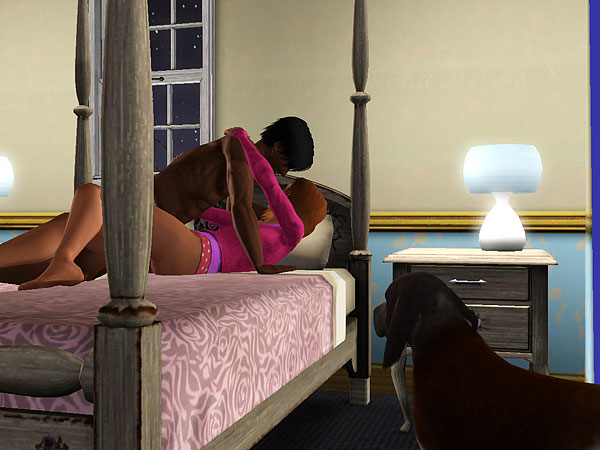 Theese dogs are random. Really, EA?! Do you really think they look cool?! One could say she was knocking them dead.....

A few of my sims have done that actually. Not just laptops, but cars, lamps, coffee makers. I recently bought the MultiTab6000 from the store and the other night my sim newlyweds who are both in the education career came home and had one each in their inventory. I KNOW I didn't buy them one each of that... heck, I didn't even buy them one!!!
Life is short, insecurity is a waste of time. ~Diane Von Furstenburg
You don't get out of life alive. ~Jimmy the Hand
♥ Receptacle Refugee ♥
piggypeach

When I tell my sim to change her outfit, she will just stand there for more than a sim hour until she finally changes. UGH.
♫ She's got sunset on her breath, I inhaled just a little bit now I got no fear of death ♫
girlinfour

When my Sim is literally starving to death, her hunger is now in the red, and she decides that it would be a good time to play the piano
When one must, one can.
Yiddish Proverb
ChronoJohn
Top Secret Researcher
#1032

I have a friend who really did do this as baby, her mom even took a picture (which she showed me).

Today the same Sims sculpted a potty chair out of ice.

Her husband, who doesn't wear glasses with any of his outfits, wears glasses to practice/do martial arts.
ChronoJohn
Top Secret Researcher
#1034

I had a woman announce her pregnancy to the father. This happened:

"First day of work, I'm going to take a shower and make sure the horse has food and water. Hm, I still have a few hours before work, I'll make me some breakfast. Let's see, pancakes or waffles? How about pancakes. Okay, I'm making my pancakes, but now I really want to go ride my horse. I'm sure these pancakes will be fine sitting here on the stove."
eskie227

Your friend, as a toddler, crawled into a cemetery at night and went to sleep, and all her mother did was take a picture of it??? Isn't that like illegal in many US states?
kewpie

I just had a frustrating moment. New house - forgot to put in a dining table and there was only one bathroom. The sister had to pee and the brother was almost starving. The ONLY place the brother would eat was sitting on the bathtub. The sister would shoo him out and then she'd forget to go. He'd come back in with a second plate and she'd shoo him out, but not go. She wet her pants. He almost starved to death because he couldn't sit on the side of the tub while she shooed him out so she could shower. The bathroom floor was also filled with plates of cereal.

IDIOTS! BOTH OF THEM!
Genosythe
Test Subject
#1038

My sims do a lot of stuff that annoys me, and one thing that happens far too often to me is whenever my parent sims are going to read with the toddler... The nursery is upstairs, and so the parent fetches the book from the baby's bookshelf, and then just leaves the room and walks down the stairs. The poor, bewildered toddler if left alone at the top of the stairs while the parent just herpaderps at the bottom for a second, before putting the book in their inventory and forgetting all about reading it to their kid.

Another thing that happens way to often is when they have to pee really bad, but decide to use the bathroom that is at the far end of the house from where they are...

I also hate it when my sims get up in the morning and are really hungry, but instead of grabbing some leftover pancakes that are in their nice, expensive fridge, they decide to make some crappy waffles, and then their carpool arrives just as they finish cooking.

And don't even get me started on those imaginary friends that follow the kids around. The worst part is when I make the kid shower/bathe. The stupid thing derps along with the kid into the bathroom, just after the kid manages to fill the bathtub, then he empties the tub to shoo his imaginary friend out of the room, and then forgets why he was in there in the first place.
KiaraRawks

LOL yea the reading to toddler thing is annoying. It also happens when trying to teach them to talk, walk, and potty train. It's as if the parents are saying, "Oh, you can't walk down the stairs? Hmm guess we won't be *insert toddler/parent action*"
Onyx Sims is now open!
vhanster

One of my Sim killed his enemy, but still got this negative "Death of a Loved One" moodlet, and kept crying every now and then. Since when is an enemy a "loved one?"

... Meanwhile, her husband, who witnessed the death had no reaction and went straight to the spa after a few minutes of mourning (I did give him the stone hearted reward, though)
BitterSweetNoodles

At least the guests still think its a cool party....
MissCallOfDuty
Test Subject
#1042

My Sims continually feed their dog/cat treats. I'm surprised the animal didn't blow up to the size of a beach ball...
Tzigone
Forum Resident
#1043

Quote:
Mine don't do that. They seem to mostly ignore cats (even one of my cat lovers), but they swarmed the small dog I had. They play the regular-sized ones, but every time I clicked away from them, they went after the small one. Rather than treats, the action I see most for dogs is tug-of-war and for cats is have-fun, I think? The one with the laser pointer thing, anyway.

But I've only had like two horses, three cats, three dogs, and one small dog. Pets are not my favorite thing.
Sugar Rave

Bonfire on the second floor, this happens...

Why would he even THINK of going back inside?
jjeessss
Test Subject
#1045

This is the most recent: I had my sim make gourmet pet food (beef). While she was making it, I had another sim take a picture of her daughter, getting ice cream from the truck. In all of ten sim minutes, I shift the camera inside, only to see the sim who had made the pet food, beginning to fil the bowl with, you guessed it, plain ol' kibble.

I tried to cancel it, but of course, it was too late.
leo06girl
Inventor

the discipline system that came with generations still pisses me off. >_> wish there was a way to turn it off. its just so effing annoying to be in the middle of coordinating things, only to miss that ONE child sim is late for school by 20 mins...suddenly, everything gets cancelled that i had carefully planned out in favor of the nearest parent sim WHO I HAD OTHER PLANS FOR to run over in an enormous waste of time to scold the "offending" child. then i have to take more time just to let them off the hook so everyone can get on with their stupid lives, already. it wouldnt be so aggravating if there was the option of cancelling the action, but nope, apparently, EA thinks helicopter parenting is universal and non-negotiable. even though most of the time my kids "act out", its either because i directed them to, or it was an offense so minor its not worth the attention it takes to scold.
who's supposed to be playing this game, EA? you, or me?
"The more you know, the sadder you get."~ Stephen Colbert
"I'm not going to censor myself to comfort your ignorance." ~ Jon Stewart
Versigtig, ek's nog steeds fokken giftig
Nyami

My sim got this as a job.
OF ALL OF MY SIMS, WHY SHELDON COOPER?

Quote:
dear lord really what are the chances? just don't take the battle ostrich or there will be heck to pay.
Inverseexit
Test Subject
#1050

I totally agree
Whenever I have an annoyance with the sims 95% of the time it's because of autonomous actions. Just a few minutes ago my house caught on fire and once I'd gotten them outside they kept going in and basically standing on top of the fire even after I turned off free will!
I got so tired of telling them to leave over and over I just made them jog to the end of the street.