Hi there! You are currently browsing as a guest. Why not create an account? Then you get less ads, can thank creators, post feedback, keep a list of your favourites, and more!
Quick Reply Print version
Search this Thread
Replies: 8005 (Who?), Viewed: 907210 times.
Page 73 of 321
hugbug993
Top Secret Researcher
#1801

I think my sims are too attached to their pets. For one thing, a pet dying in this household generated more sorrow than when one of the people died. On a related but not pets-related note, a sim from another household autonomously decided to do this:

Now I'm picturing him as a cheesy supervillain.
Advertisement
StardustX


Now that I think about it, Serenea and Demetrius aren't married.
So why the hell is Angelina's ex-husband now her Uncle? o.O

Foul Sperm...What the? I guess they're grading it like plants, but how would one even grade sperm? (or how would a Sim even donate it? I've never seen that.)
eskie227

You mean you don't use a no mosaic mod?
hugbug993
Top Secret Researcher
#1805

Hospital Overhaul mod. What I want to know is why and how he managed to do it autonomously.

EDIT: You said that Serenea was Angelina's niece. Wouldn't that make her ex-husband her nephew?
Orilon

I don't use a no mosaic mod, which is why I was so confused as to why I could see Cornelia Goth's nude bottom so clearly without the censor.
BL00DIEDHELL

I can only imagine the interaction between Nestor and whoever was taking his donation.

"Yeah, here's a sperm sample. Please use it to benefit someone. Oh, by the way, it's pretty foul. That's what my girlfriend tells me anyway."
The Overlord Legacy - Taking over the world one generation at a time.
The Addison House - The reality show where eight contestants are crammed in one haunted house to survive.
imkrazy1000
Lab Assistant
#1809

Well, I guess he won't have many girlfriends in his lifetime...
imkrazy1000
Lab Assistant
#1810

I installed "Supernaturals" two weeks ago. It's really funny. 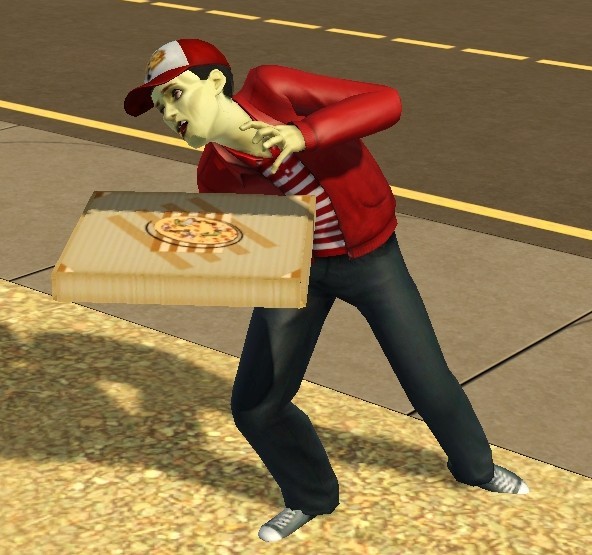 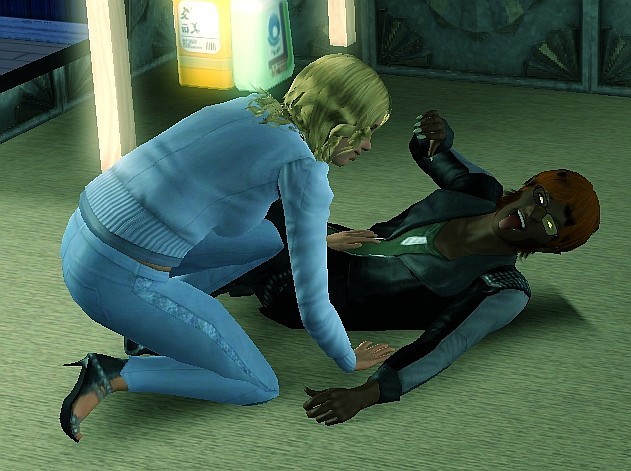 All I can say for this couple is WTF CHRISTINA. Never try to marry an insane Sim! EVER! Or their proposals will turn out like THIS: Poor guy just wanted to marry her and she laughs in his face! Their relationship was at the highest it could go, too! At the moment, I'm wondering what it says about me when the very first thought to cross my mind upon gaining control of an adult alien sim for the first time was "will the game let me successfully drop a meteor on somebody and kill them?"

Because that's exactly what happened a few weeks ago.

It turns out that yes, the game will let you do that. But because this is my absurd mess of a town, nothing significant can ever happen without some kind of baffling disaster occurring along the way. And thus began one of the greatest chain reactions of ridiculous autonomous sim moments I've ever seen.

Things began somewhat logically. I selected my alien, went into town and found a worthless game-generated pudding-faced townie to test this out on. Because let's face it, puddings don't count as people. Puddings are useless subhuman blobs that exist solely to be bashed into an acceptable shape via Master Controller or eternally tormented and killed for the amusement of the sim gods looking down from on high.

Puddings are clay, and we are the hands that mould or crush them. So sayeth myself.

SUFFER NOT A PUDDING TO LIVE

So the sky soon went dark, my alien hid in a toilet, nearby inactives and NPCs began to freak out and Indiana Jackass and Pudding McFashionSense here predictably abandoned all notions of self-preservation in favour of standing around to marvel at the multi-ton flaming lump of death plummeting through the atmosphere in their direction. Though at least the latter of the two managed to give a vaguely appropriate response to it:

After this point, though, everything rapidly went to hell.

First, half the objects on the lot all exploded in unison about two seconds after the initial meteor impact, leaving the ground permanently scorched and replacing most of the deckchairs around the pool with burnt-out piles of miscellaneous garbage. Most of them are still there. So, for that matter, is the meteor itself. Catastrophic property damage is a wonderful, wonderful thing.

I then sent my meteor-dropping mistress of destruction back over to inspect her handiwork, and-

...Wait a minute, who's that coming round the corner? What on earth is going on behind my alien? That's Mortimer Goth, surely he's not actually going to-

WHAT THE HELL ARE YOU DOING MORTIMER GOTH

Yes, your eyes do not deceive you: As far as Mortimer Goth is concerned, the most appropriate response to witnessing a nearby meteor strike is apparently to wander right up to the smouldering crater and drop a newborn baby on the floor next to it so it can take in the lovely aroma of smoke, ashes and interstellar dust for the first time. Bugger safety, forget fire hazards, this is a once-in-a-lifetime opportunity for your little one! Trauma? What trauma?

Unfortunately, I was too busy laughing at this point to keep pressing the capture button, but within the next minute the following things also happened. And no, I am not exaggerating any of them:

- Torrential rain began despite the weather having been sunny less than a minute ago. Baby is soaked and still screaming.

- Mortimer Goth inexplicably became singed and ran off home for a shower. Baby is abandoned, soaked and still screaming.

- Every NPC nearby got stuck panicking outside in the middle of the road. Baby is abandoned, soaked, soiling itself and still screaming.

- A nearby SimBot suddenly short-circuited. Baby is abandoned, soaked, soiling itself, still screaming and surrounded by sizzling scrap metal.

But wait, there's more! Because two catastrophic events occurred in my town that day. One involved a traumatised NPC floorbaby that I couldn't do anything about. The other? Well, it can best be described as an overlooked threat that's been on the horizon for a while...

...Because somebody's just had a birthday.

What? SPROG is evolving!

Goodbye, world. It's been nice knowing you.
gemly_teddie

Omg! Actually still loling about baby Goth being abandoned at a disaster site. Only in your town.

And teen Sprog strikes the fear of God into me. Sends chills down my spine and makes me feel like my sims are no longer safe, even though they are on a different hard-drive in a different computer. These are scary times for sims all over the Simverse...
Call me Gemma or Gem :)
Played since original 'The Sims'. Spend my life working, playing and lurking around here, posting not enough.
The Only Way Is Up
simblr
BL00DIEDHELL

I fucking swear, if I get an injury from laughing so hard, I am suing your tits off, Mr Mingham Smith!
Fuck this shit, I'm out.

Your world almost doesn't need the Scumthorpes, Mingham. The AI is terrible enough.
The Overlord Legacy - Taking over the world one generation at a time.
The Addison House - The reality show where eight contestants are crammed in one haunted house to survive.
eskie227

So, like, did anyone pick up that giant space rock and sell it? They're pretty valuable, so it would be a shame to let that go to waste.

If you were feeling guilty enough (which I doubt) you could put the funds into a trust to send that abandoned baby to University when it grows up, and the EP is released. Trust me, college is not cheap these days. My kid just got accepted, and I'm stuck on Kraft mac and cheese for the next 4 years.
Kathwynn

Sprog looks like he was badly crossed Hannibal Lector and Norman Bates.. Where he picked up only the most psychotic sides of each.

I could be wrong.. Well we can only hope. After all the world didn't end.. Then again Sprog has not become an adult either.. Maybe the Mayans were just a little off after all... Just sayin...
ChronoJohn
Top Secret Researcher
#1820

One of my greatest simming regrets is that nobody's ever made a Hannibal Lecter mask for TS3. I always wanted to have one for all ages and stick it on baby Sprog and child Sprog as well as his older forms. I'd have demanded one months ago if there wasn't a rule against requests.

...Then again, it's probably a good thing that rule's in place, otherwise I'd most likely spend an entire thread demanding ridiculous stuff like Bane masks for toddlers, sliders that pull the lips apart and thin them until the sim has permanently bared teeth and no lips at all and some kind of vampire fangs-esque accessory where all the teeth are long and sharp like Venom's spiky abomination of a mouth in Spiderman. And god knows what else.

What can I say? I like to get experimental with CAS. In a somewhat Frankenstein-esque sense a lot of the time, admittedly, but there's nothing wrong with wanting to push the limits of what the game can do. And occasionally outright violating the laws of sim reality for the sake of making inhuman creatures and bizarre characters that nobody expects to see.

Even if the results are often slightly disturbing.
ButchSims

And Mingham, that creepy looking pic looks like the mother of the Pale Man from Pan's Labyrinth.
Visit my blog, ButchSims!
Check out my Modthesims Yearbook!
imkrazy1000
Lab Assistant
#1822

I pity the fool who decided to have townies wear hideous clothing. In twinbrook, I remade some rocker elder and im like, WTF ARE U WEARING????!!!!???
Sunnyish

@Mingham - So there's this commercial over here in America that scares the hell out of me every time it comes on tv, because I swear, the kid in it looks a little too much like a human incarnate Sprog. (Child-Sprog, not this new, soul-crushingly terrifying TEENSPROG that's going to give me nightmares for the rest of my life...) I took a screencap of him off of youtube. SEE? IT'S SPROG. Only in a sweater vest. And holding a corn dog. And minus the look of pure, unadulterated evil in his eyes. But still, the hair... and the eyebrows... Just similar enough to make me fear for all mankind.
My MTS Yearbook
“Never put off until tomorrow what you can do the day after tomorrow.” - Mark Twain
gemly_teddie

I have no idea what this woman was doing. She got some hot wings out the fridge, and put them on the table and stood there doing this for about a sim-hour before sitting down and eating...
Call me Gemma or Gem :)
Played since original 'The Sims'. Spend my life working, playing and lurking around here, posting not enough.
The Only Way Is Up
simblr
kewpie

I had a townie drop her baby in the snow so she could rock out to a busker in the park. The baby was quickly buried in a pile of snow and kept thinking about thermometers and shivering cold shoulders. Quite miserable to watch.
Back to top