Hi there! You are currently browsing as a guest. Why not create an account? Then you get less ads, can thank creators, post feedback, keep a list of your favourites, and more!
Quick Reply Print version
Search this Thread
Replies: 176 (Who?), Viewed: 71393 times. | You are currently not a member of this group. Would you like to join it now?
Page 5 of 8
simsample

@srtv I love the Christmas business! Especially the uniforms.

These kinds of shops are popular IRL too- I can think of two that have existed for several years.

Wow, the tax rules are quite complex- I'm not sure people are going to be too happy, especially when they find out who is exempt!
I will choose a path that's clear- I will choose free will
-RUSH- -RADIO- -RADIO- -EON- -ARCHIVES-
Simpeople and Me Archive- -11Dots Archive- My Sims World Archive
Angel Classic Rock Mix!

I didn't play a lot this weeks, but I believe the city will be a chaos when the news arrive to all the citizens...

Yes, I love the Xmas store, all my Sims decorate their houses with the products of "Sweet Christmas"...

I needed more drama in my city, so the tax system will give me that...

Thanks for the comments, right now I don't play too much, because I'm downloading a lot of CC for my game, after that, I think all my Sims will get makeovers or new clothes...

The Roberts Family is having a Xmas Party, they aren't the best example of a good family, but Patricia is really trying, they invited their neighbors to the party to obligate Hanna to behave herself, Ethan Stardust and Kendra Blaise were glad to be invited, the Urbz couple also were happy, because they needed a spare time and Sasha Aires love the social events, this picture is the only quiet moment in the party, also I add a special xmas greeting for you guys here in Mod The Sims from my part and my Sims! Happy Holidays! 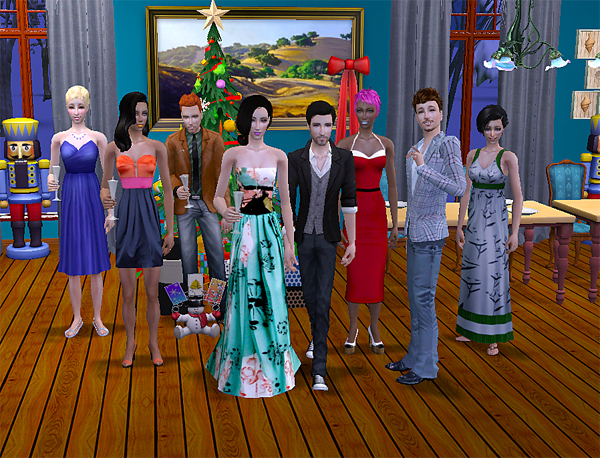 Quote:
Great Picture and it looks like every one was having a nice time. Me I am sick, and though I am recovering...still not in a party mood.
for info on changing the Mac Open File Limit check out my post here http://www.insimenator.org/index.ph...html#msg1628939
Curiosity killed the cat,
but satisfaction brought it back.
FinnSims

Thanks, and I hope you can recover well!

I forgot to add that all the Xmas decor that the Roberts got in their house it was from the "Sweet Christmas" Store!
"Old Town Revival: My MegaHood"
Charmful

That's a nice and classy Christmas party pic, thanks for sharing srtv! I especially liked the decor in the background, did the family get their nutcracker statue from the Christmas shop?
Uh oh! My social bar is low - that's why I posted today.
My SIMBLER | SIM WHIM | SIM VIDS | SIMS 2 STORIES | SIM PICTURE-TAKING TIPS | MY HOOD | SIMSTAGRAM | TWITTER | TWITCH
FinnSims

Thanks for the comment, I tried to keep it simple with the party and yes, all the décor from the Xmas Party is from the “Sweet Christmas” Store. Now we know the reason of success from that Store, they have the power of the Xmas franchise and no other store have those products in the city.
"Old Town Revival: My MegaHood"
FinnSims

Last night in Old Town there were a lot of Parties for the New Year’s Eve, like the party that Indiana and Claudio Gold did, they are a young couple with a lot of money from Claudio’s part, Indiana is a beautiful woman, but the people thinks she’s a gold digger, in this moment she doesn’t have any friends in the City, so Claudio told her they can made new friends with a party celebrating the New Year.
They invited a lot of people, but only the married couple Riche, also new in the Town and Bella and Michael Bachelor answered the invitation. But for Indiana it was the best party ever. For the Bachelors was an opportunity to relax after all the fights with the Goths, and the other couple, well they just arrived, so they didn’t have any chance to go to another place. 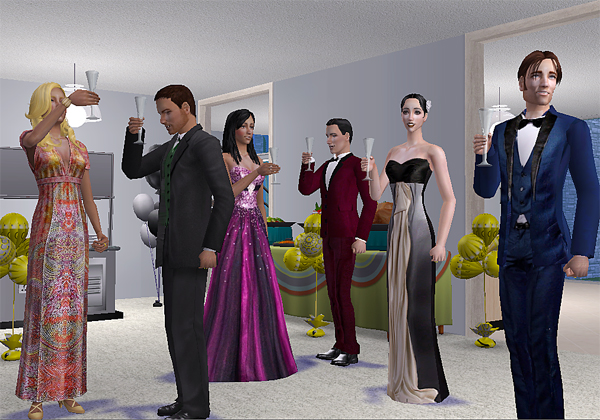 @srtv Very nice party. I particularly love the dresses and the suits that your sims are wearing. Good story line as well.
for info on changing the Mac Open File Limit check out my post here http://www.insimenator.org/index.ph...html#msg1628939
Curiosity killed the cat,
but satisfaction brought it back.
Charmful

I love your new years picture! it looked like a lot of fun! I also like the formal attire everyone is sporting for the classy type party <3
Uh oh! My social bar is low - that's why I posted today.
My SIMBLER | SIM WHIM | SIM VIDS | SIMS 2 STORIES | SIM PICTURE-TAKING TIPS | MY HOOD | SIMSTAGRAM | TWITTER | TWITCH
simsample

The party pictures are great; I love seeing your sims all dressed up and having fun.
FinnSims

Finally I can play again, today I opened a random house to do a little makeover, they are the Picaso family, right now Jessica and Matthew have a little baby boy called Austin, the both of them are working right now, so they needed a babysitter, for Jessica this was a difficult choice, because she wanted to raise his son by herself along with her husband. Matthew is so happy with his son, he love to play with him and teach some tricks. 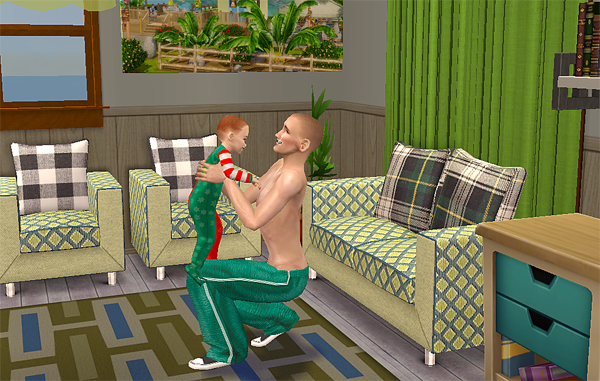 Matthew also teach his son to walk, they are so adorable together... 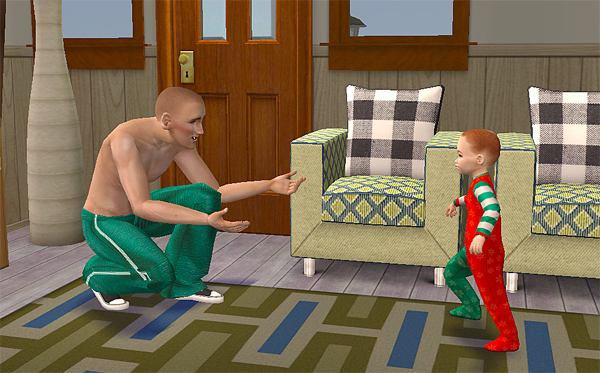 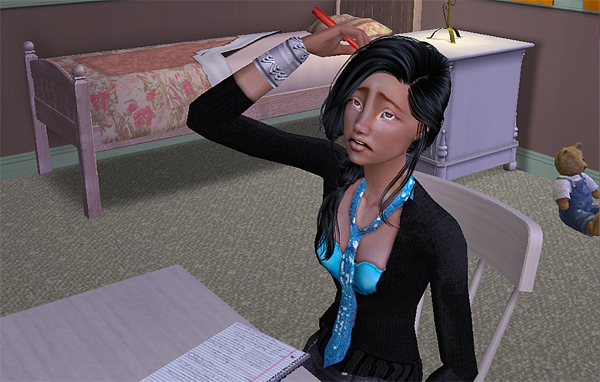 Time to do some homework, Tessa Ramirez is one of the most ambitious and intelligent young girls from Old Town, she want to make her own path, a different one apart from her parents business.
"Old Town Revival: My MegaHood"
Charmful

Glad to see you were able to play again

So did they get a nanny so both could work and your pics was just Matthew's day off and playing with Austin. Will Tessa go to college? Which one?
Uh oh! My social bar is low - that's why I posted today.
My SIMBLER | SIM WHIM | SIM VIDS | SIMS 2 STORIES | SIM PICTURE-TAKING TIPS | MY HOOD | SIMSTAGRAM | TWITTER | TWITCH
Cher64
Field Researcher
#116

Matthew seems like a good, hands-on parent, and I'm sure Tessa's dedication to her school work will pay off. With her brains and ambition, she can probably do anything she sets her mind to.
lordtyger9

@srtv I am glad that you are able to play again.

I really work on making my Sims be good parents.

I like Tessa Ramirez and I am sure that her dedication to her school work will pay off.

Does she know what she wants to do or where she wants to go to University yet?
for info on changing the Mac Open File Limit check out my post here http://www.insimenator.org/index.ph...html#msg1628939
Curiosity killed the cat,
but satisfaction brought it back.
FinnSims

Thanks Charmful, they hired a Nanny, but they tried to spend the most of the time with their son anyway, they both are in the same level of job, so they have two free days "Monday and Tuesday", Matthew taught his son to walk in that time... I don't know if Tessa will go to College, maybe she will start her own business...
"Old Town Revival: My MegaHood"
FinnSims

Matthew and Jessica are both really good parents, I think the reason is that I love that couple, always I played them with good results and right now in this game, they are going to have a wonderful life.
In the other hand, Tessa is a good girl, probably she will have a wonderful future in Old Town, but she doesn’t have business connections right now, only her parents, maybe she needs more social skills.
"Old Town Revival: My MegaHood"
lordtyger9

Me I would send Tessa to one of the Universities in order to meet more Sims and develope some connections, and even join a Sorority while she is there for example.
for info on changing the Mac Open File Limit check out my post here http://www.insimenator.org/index.ph...html#msg1628939
Curiosity killed the cat,
but satisfaction brought it back.
FinnSims

Thanks @lordtyger9 I agree with you, I always try to make good parents, but some of my Sims aren’t “good parent material”, so there’s sometimes drama in the city.
I think Tessa will choose based on her dreams and right now she wants a good life with money and a career with distance from her parents, she loves them, but she needs her space, so maybe she will go to College a year or two and after that she will open a business in Riverside.
"Old Town Revival: My MegaHood"
FinnSims

I played last night with Claire Charming, she’s the only character that I keep from the Original Old Town (cloning and that stuff), I like her a lot, in my game she’s always a independent and strong women with a lot of studies and work. 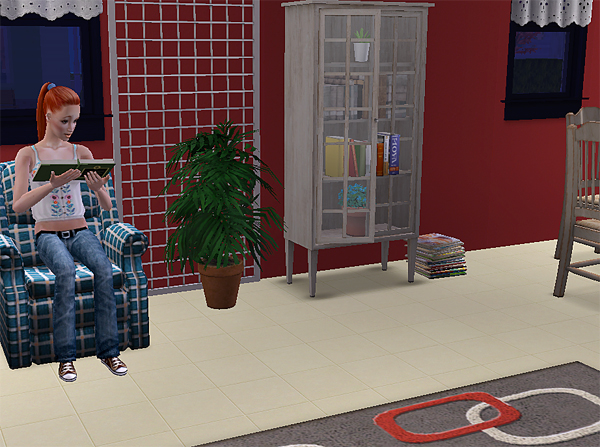 This time around she’s in the "Resident" position of the Medicine career, and by this way she met several people of this city and that brings the first bad thing about Claire, his new boyfriend. It’s not other that Don Baxter, the playboy of Riverside, she’s so happy with him, this is the first formal relationship for Claire, so she’s trying to deliver everything to Don, but Claire doesn’t understand why Don still lives with his ex wife although she doesn’t make questions or drama about this situation, this thing hunts her dreams in the night. 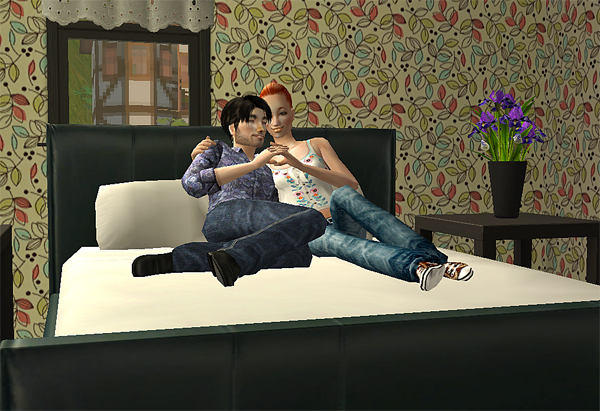 For Don this is only one of his adventures, he doesn’t remember if Claire is his number five or six after the divorce, but he wants more, and Claire has fallen in the trap. Last night they were together for the first time, but in the morning, Don went home even without saying goodbye, Claire will be disappointed.

Pd: I tried to decorate a little the house of Claire, but I'm not a good decorator

Well I think that Claire Charming, will have to realize soon that Don is not serious about her and that he does not treat her well. Then because she's an independent and strong woman she needs to go out there and find someone else.

So get busy and hook her up with someone nice!

I thought the house looked pretty good.
for info on changing the Mac Open File Limit check out my post here http://www.insimenator.org/index.ph...html#msg1628939
Curiosity killed the cat,
but satisfaction brought it back.
FinnSims

Thanks for the comment, I will search for a good partner for Claire, the only problem is that her new friend in the work is "Don Lothario" and that's drama and trouble for the future...
"Old Town Revival: My MegaHood"
Back to top