One thing- was looking into making cabinet-mounted microwaves, but discovered that using NRAAS's Debug Enabler (https://www.nraas.net/DebugEnabler), you can move the microwave above the counter height! Problem solved!

Unfortunately, the counter space is unsable (except for sinks) because the microwave still technically 'occupies' the counter slot and the animations are just a little bit weird- but hey, it's possible! What AO flag are you using? It's very obvious and I kind of like it.
Hypocrisy is only okay if I do it.
( Join my dumb Discord server if you're into the whole procrastination thing. But like, maybe tomorrow. )
Elynda

I discovered - or rather, my sims discovered - the wonders of teleportation. I've been playing in Barnacle Bay, where I've built a dock and placed a houseboat near where the pirate ship bistro is. It took me a bit of experimenting to get it working, but it's fine now. The only thing I was concerned about was the school bus and the carpool, since the boat is at the end of a long jetty and some way from the road. Would my family be able to get to school or work on time? But hey, no problem! As soon as the bus and the car appeared they both finished what they were doing and beamed out of there. I sometimes cheat a teleportation when I want to get sims somewhere fast, but I've never seen them do it autonomously. Now, if only sims could just do that every time they get stuck somewhere it would make the game run a lot more smoothly.
Simblr: Elyndaworld *** Wordpress: Tales of Nantrelor
thesims1depot
Lab Assistant
#11906

Much to my embarrassment, I just learned that spiral staircases are stackable! It makes sense that they would be, but it never dawned on me that they would work that way in the game. And this, after years of playing and building!

To make you feel better I've been playing for years as well and just learned this recently. I usually try to keep my builds to 1 floor but I have been expanding into two floors and

saw I could do this..second, and another facepalm..clicking on the moodlets to make them fulfill needs.

Quote:
You can stack them but they are only usable like that if they're turned in the right direction compared to the lot/world coordinates unfortunately. So that makes it one working position and 3 broken ones. It's best to always test if sims can route to them on the specific lot to avoid major routing tantrums. Just one of the things they broke in patches along the way and never bothered to fix (remember that 15 mins when multistory lighting in the BG was a thing? Forever salty about that one, too.)
thesims1depot
Lab Assistant
#11909

Thanks. I'll definitely test this out because I've been running wild with these staircases ever since I discovered this neat feature. Figured there would be a catch somewhere.

What do you mean by that multistory lighting issue?
The Sims Depot | Blog
enable_llamas

Quote:
When you have an open two-story high room (no floor in between) and you place a light somewhere on the second story for example, the light effect gets cut off on the edge of the second floor and everything on the floor below remains dark (and vice-versa). The reason you usually need to put a million buydebug lights to get it to even out and even then it usually ends up looking choppy and annoying.
thesims1depot
Lab Assistant
#11911

Oh, thanks. So I imagine that's why they eventually came out with those invisible ceiling and wall lights?
The Sims Depot | Blog
peno
Lab Assistant
#11912

Today, when creating a Sim for my new experiment of sorts, I've found out that Couch Potato and Neat traits do not conflict with each other. I feel stupid now, but for years I really did think that these two traits are incompatible with each other, but now I have Sim with both traits and I wonder how it will work.
dinadine
Lab Assistant

apparently food trucks love to feed your simmies so much they will feed them even after they crash lol .......
Floraflora2

I don't see why they would conflict. You see, I'm a Couch Potato myself, but I can't enjoy myself lounging on the sofa until all parts of my home are squeaky clean.

That taking a selfie with another Sim has a chance of a fuck up, which I can only guess comes from social networking skill. Animation goes like where the flash light both blinds two Sims and they get disorientated and shit like that. And yeah, that was unexpected.

Yeah.... I can imagine traveling to the future through a portal can mess up end up so bad that you forget to turn off your ultra flashbang flash light off.
P.S. Sorry for my bad english.
Mrmo
Scholar
#11916

I discovered that my Isla Paradiso world have gone all messed up. gain! Darn it, It did work perfect at my last play session two weeks ago.

Oh well, I went to Bridgeport instead.

There I discovered that delivering a meal is a impossible task. There is a task the sims can do: Prepare a meal and deliver it to an other sim. But how hard I tried to place the plate of food (or the serving plate completely) in my sims catalog the game claimed that I had 0 of 1 meals in my sims inventory. In TS2 a sim can prepare a single or a group meal but it's not possible in TS3. So EA messed up that one. I had a sim complete a task like that before but it was so long ago so I do not remember how I did it.
SneakyWingPhoenix

- Retiring from a performing career makes you lose all of yours abilities (such as using the bouncing ball and ring of fire), which is pretty lame. All of that hard work left my Sim with a finger in their face.
- With the opposite personality potion left me discovering a modded trait - "Backstabber". Doesn't seem like through vanilla means it's possible to remove it, but I'll have to try with the lifetime reward.
P.S. Sorry for my bad english.
PlantSimmer

The "produce" will be removed from the plant, but won't show up in the sims' inventory, and the plant will be stuck in the harvest stage. Even using debug tools to move the plant to mature stage and feed it again, it'll never produce any "fruit" ever again. I guess it's for the same underlying reason that Fairies aren't allowed to use Bloom on Omniplants, except... that they forgot to account for whatever the issue is when making the Dragon Valley content.

So, yanno... warning if you're a gardener in Dragon Valley and wanna grow deathfish off of bushes, I suppose. DON'T use green dragons on lots with omniplants.
PlantSimmer 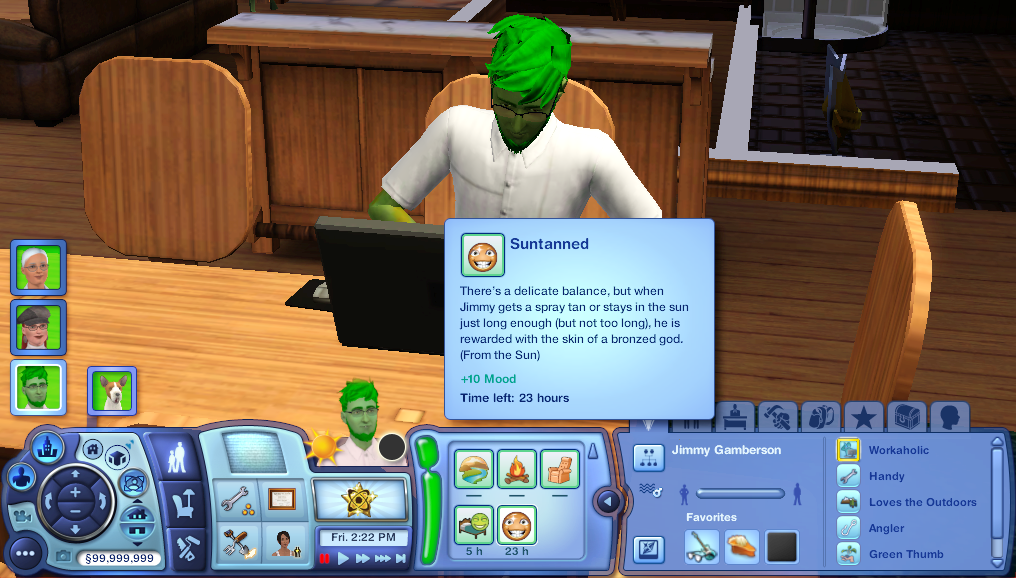 Plantsims can't get spraytans from the tanning booth... but they CAN get natural tans? Or at least the moodlet... it's a little hard for me to tell if this is actually affecting his skin tone in any way, lol.
But then, I can barely tell what difference the tan makes even with normal human sim...
Tacitala
Lab Assistant
#11920

You can change what color the lights that go on the side of a swimming pool make- including turning them into blacklights.
MurderPrincessK

Creating 35 households in CAS takes way to long.
Made my new world and now trying to fill it has turned out to be far more arduous than I ever expected.
Props to all you world builders out there.
Wren-der Simblr // Sim Art // Pictures // Downloads // Random Nonsensical Rambling
Follow Friendly
Mrmo
Scholar
#11922

I discovered that some art (or at least this one) reacts to full moon. The redecorated the house of my sim and "hang" a painting on her bedroom wall. It's a dark haired, friendly looking lady on a white back ground. And look at this now... 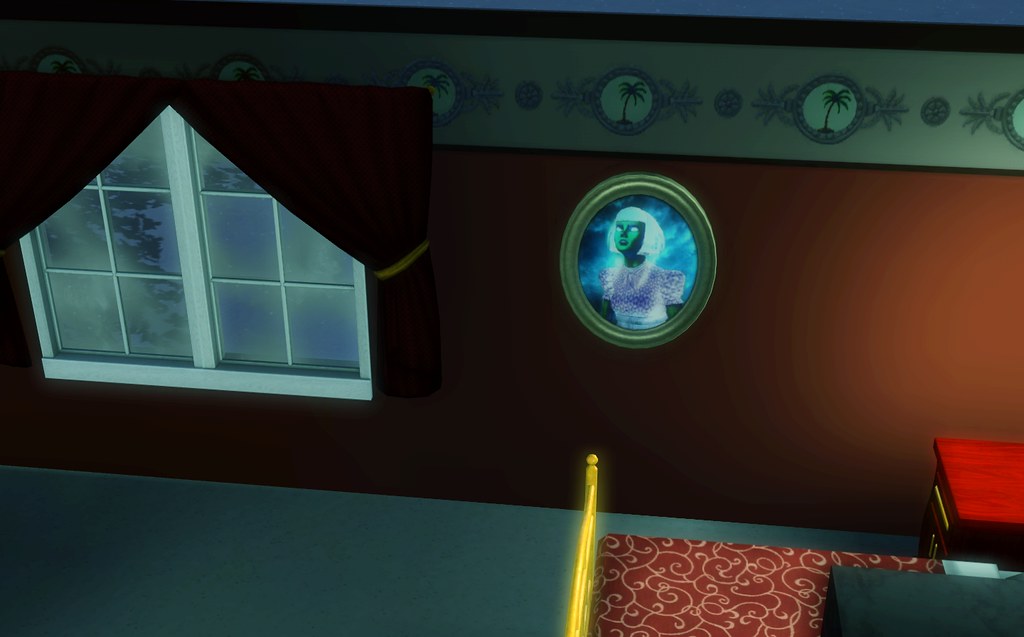 The paintings that came with Supernatural do that.
igazor

When a sim ages up, do the paintings ever age instead of the sim?

Why 35 households? My memory's a little fuzzy but I don't recall having to make more than 25, and some of them were ones I had saved to bin when the game auto-generated them during one of my play testing sessions.
The Sims Depot | Blog
Back to top