Hi there! You are currently browsing as a guest. Why not create an account? Then you get less ads, can thank creators, post feedback, keep a list of your favourites, and more!
Quick Reply Print version
Search this Thread
Replies: 1526 (Who?), Viewed: 145310 times.
Page 3 of 62
Mspigglypooh

I honestly think that larger companies are worried about putting their foot in the door with a simulation game like the sims because of the consumers. Just take a look at the sims community and how faithful most of us are to the sims and think about how a company may see it. The expectations are extremely high with most simmers and it's pretty sad we have ones judging while a possible competitor is still in the early stages of development. I for one appreciate his transparency to how his progress is coming and love the fact that he's sharing the journey with us visually. It took a lot of guts for him to take that step and share his baby with us. Especially knowing how Maxis and the community are. I'm really looking forward to seeing where this goes. All of this is refreshing to me.
Advertisement
TRobbins
Lab Assistant
#52

My reply wasn't directed just at you. Anyone trying to compare these graphics to BOTW blows my mind as well. I just don't see a reason to have that discussion at all. From what I've seen so far, it's far from ugly and I don't see a point in arguing about graphics when it just seems unreasonable to suggest that it should be better when it's just one dev.

Remember, the fact that it's just one dev also means it doesn't have to sell as many copies to be seen as a 'success' opposed to failure.
Inge Jones

I'd happily buy the game and try it out, but I have seen far too many promising games fall through having spent money on patreon for them. At least with Kickstarter if nothing happens you get your money back
"You can do refraction by raymarching through the depth buffer" (c. Reddeyfish 2017)
tizerist

I like the look of this game. The graphical style is ok by me. It may not be at all detailed, but it is clean, vibrant and has charm.
There was a guy a couple of years ago who was on these forums showing his Ts3-style game, and, like I said before, I don't think one person can pull off a trick this size but I'd love to be proven wrong.
#BlairWitchPetition
TS3 NEEDS: TENNIS COURTS > BUSES > PIGS/SHEEP
Can't find stuff in build and buy mode? http://www.nexusmods.com/thesims3/mods/1/?
mixa97sr
Top Secret Researcher

I don't think he's working alone. I offered 3D modeling help but he said 'they' don't need it and when I asked if they will have an open position he said that "When we need a 3D artist..." So I'm pretty sure 'they' have a 3D artist (maybe even multiple) and maybe even more programmers. It's probably a small team, so that's a bit more refreshing.
Jonni8

The developer actually told us the art style is directly inspired by BOTW, so that is where the comparison originally came from.

This message has been deleted by MoozyFoozy.
TRobbins
Lab Assistant
#57

Gotcha. It's clearly a similar style. Still does not justify anyone thinking that it's somehow going to hold it to the level that BOTW achieved.
RoxEllen1965

I don't understand why anybody would complain about the art style at all. The game is clearly in an early stage of development and the team likely has more important things to concentrate on right now like Build Mode mechanics, AI, etc. I'm sure they'll clean up and fine-tune the graphics after they're done with the big important stuff.
Thanks to Crmelsimlover for sharing these rare Christianlov mods for TS2: Cpack editor with working face DNA fixer and Skin Selector Painting Prototype. Instructions for adding custom skins to Skin Selector at post #5 here. Instructions for using the DNA fixer at post # 2662 here.
Aularen

Even in its alpha state I think the graphics look great. I've always preferred the cel-shaded/stylized style over hyper-realistic graphics anyways. And the build mode features look incredible.
Naus Allien

Just to give some of you a little bit of perspective, THIS is what The Sims 2 looked like pre-alpha: 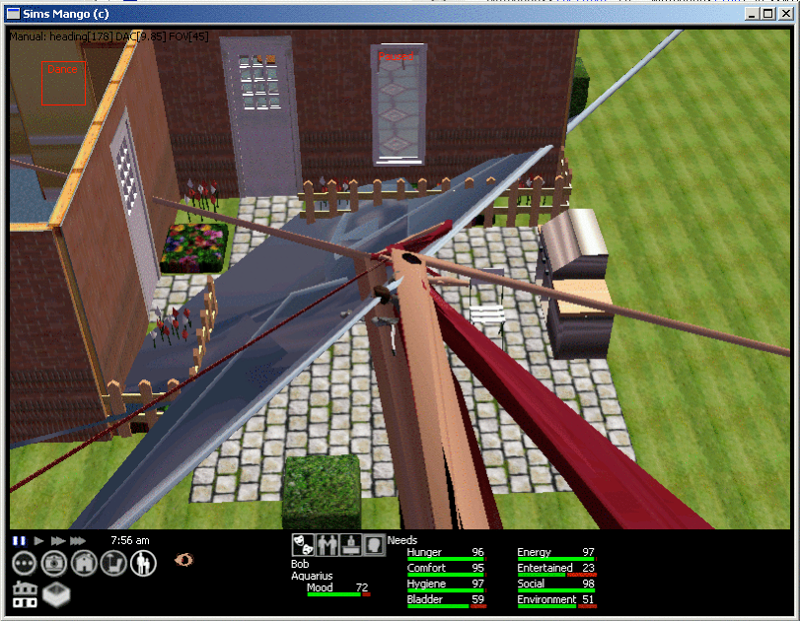 Sorry to deflate you, but in my experience, when they give an answer like this, it means the project isn't advanced enough to even clearly know how to split the work, and the single developer is working on a bit of this and a bit of that and constantly going back to re-architect the whole thing. At times like that you don't take on a team, since they will simply become frustrated with having to start over or with the lead dev still not knowing quite what they want. IMHO this is waaaaaay early in the day for this game.
"You can do refraction by raymarching through the depth buffer" (c. Reddeyfish 2017)
mixa97sr
Top Secret Researcher

From his positivity and confidence that this will work, I feel like indeed he has people that help the project occasionally. It does not have to be a full team, look at FreeSO. There is one main dev, but there are few 3D modelers and gameplay programmers that add stuff to the game without his help. It's a casual, hobby project but there are people helping. I'm just saying that he does not have to be completely alone at all.
CatMuto

Graphics look okay for buildings, though I agree they could use work.
Lack of details on humans, sure, I don't mind much, especially if it's just the beginning or an indie game.
I mean, can we all recall in our minds how Sims 1 sims looked? Not all that detailed or high-quality, either. (Though, yes, graphics weren't that amazing at the time)
Naus Allien

TS1 3D graphics (most of TS1 was 2D sprites, but there were 3D elements like The Sims themselves and accesories or things they'd use) were somewhat outdated for their time. Sims didn't have facial animations, for example. TS1 was released in a transitional stage from 2D to 3D graphics. Some games like Tomb Raider 1 (1996) were early adopters and by the time TS1 was released, they could boast pretty good graphics for their time with basic in-game facial animations (lip movement). I feel like TS1 would've aged better as a 3D game, as now we could have texture and mesh replacements and many other features like better lighting but the 2D engine makes it almost impossible to improve the graphics (look at how good FreeSO can look in 3D with improved lighting).
Inge Jones

No, but a music mixer and a programmer (like the last game that got this far had on their "team") are not exactly on the home run. The FreeSO guy got lucky. If you want to see a game that has been costing its devotees $500 a month in patreon subs and still isn't a game after 4 years, look at Citybound

He still sounds as positive as he did on day 1 and his plans for the "game" are very impressive. If this one would like to come off patreon and go onto kickstarter instead, I'll pledge.
"You can do refraction by raymarching through the depth buffer" (c. Reddeyfish 2017)
Motorcitydude
Instructor
#66

This message has been deleted by MoozyFoozy.
Naus Allien

Not to mention REAL-TIME PHYSICS. It's been 20 years and there hasn't been a single game in The Sims series with real-time physics simulation.

I'd love a game with curtains that move like curtains and hanging objects like the tire to also move using real time physics. Heck even grass has movement here.


This one of the advantages of using a REAL game engine instead of these messy house-built engines The Sims has been using since forever. Real engines like Unity and Unreal have integrated PhysX physics, so making stuff move realistically is "a piece of cake."
ragefire

I don’t care how long it takes for this game to be made, I just hope it comes out.
Sims 4 is severely lacking, bug ridden, the devs fix bugs & break countless others..
The game is badly lacking & a lot of ideas are taken from previous series then they dumb them down to fit into the game, seems Sims 4 is about graphics that’s it.

This from what has been seen doesn’t have to be graphical & it won’t as he stated it’s being worked on for laptops & low ends, GOOD. It’s not about the dang graphics people, you want that then go to Sims 4 & leave this to those who want the building elements & other features that will be all in one without the greedy scammy poor dlc has been half baking out to us.

As long as the Ai in the people is decent we are good, there’s been told, aging & babys, plus all the building elements on top of seasons, cars & open worlds/towns one time price, we don’t need fancy graphics! It looks fine as is just the people may need a bit of adjusting.

You want fancy graphics go to Sims 4, you want hope at better gameplay features EA abandoned for reasons unown that look to be in this game & building mechanics plus less greed, oh & modding support (this was confirmed) then stick around with this dev, they even brought up the fact of having different teirs for patreon non monthly as well if u wish to support.

Also here is there direct site:
https://www.paralives.com
Every gamer is unique take your time to find your own style, your own way to play,don't try to blend in with everyone, go on be different stand out don't be afraid, no matter what your age, no matter what you like you are you and that's what matters most.Go out at there have fun and play! ^-^
SneakyWingPhoenix

I'm curious about that cruise ship. Where these additional renders/screenshots taken are found (or I don't know how to navigate the twitter board?) ? Kinda interesting the image teased right after Island Living release (interesting promotional stunt may I add). Is the OP Alex?
P.S. Sorry for my bad english.
Dixieland

The visuals are probably in the early days, but I rather like the art style. It seems whimsical and pleasing. :lovestruc
A fool and his money are soon parted. ~ Thomas Tusser
SneakyWingPhoenix

Who's on the discord server? Or am I only stranded sheep?
P.S. Sorry for my bad english.
Inge Jones

Which one?
"You can do refraction by raymarching through the depth buffer" (c. Reddeyfish 2017)
SneakyWingPhoenix

This message has been deleted by MoozyFoozy.
xordevoreaux
Lab Assistant

Maybe if nothing else, to excuse the pun, it'll cause EA to up their game.
mithrak_nl
Scholar
#75