Quote:
I don't have any sims aging up; I just have two adult sims on an OFB lot pulling slices of cake from a newly-purchased bday cake without anyone blowing out any candles. That's why I assumed it was the mod allowing this.
HobbesED

If it's not a cake used during a birthday and just a birthday cake you bought, then it most likely is the mod. I have no birthday/cake mods. My bought birthday cakes have no options until someone goes to the cake for their birthday. It's only then that the candles light up and even if I cancel before they blow out the candles, they still can't do anything with the cake. They actually have to blow out the candles for my cakes to have the grab a slice or cleanup options to show.

Although sometimes I get an "extra" cake, lol. If a sim brings a baby or toddler to the cake, blows out the candles, but the little one soils themselves before getting tossed in the air, it apparently breaks the queue such that the little one doesn't age up, but the cake is edible. So in those cases, I have to have the Sim buy another cake and go through the process again to complete the age-up.
All of my Conversions, Creations and Stories may be found here:
HobbesED's Conversions and Creations

I once had a family where, two generations in a row, the third child in the family went through a dozen cakes at least before aging up from baby to toddler. They were eating cake for a long time.
I've got one or two things on MTS, but most of my stuff is on my main site here:
http://simcessories.blogspot.com/
(Now recruiting budding creators.)
kestrellyn
Scholar

I just age babies using the lotsynctimer, no need for any cakes, you can try as many times as you need to and you don't have to wait for everyone else in the house to crowd around and blow birthday kazoos, which takes forever. You can also do it with the Sim Blender. The only time I still need cakes is aging up toddlers in uni, because for some reason Lamare didn't enable the Grow Up interaction for them. But usually, by the time the toddler is ready to age up they've gone back to the main hood.
Rosawyn

I didn't realize there was an option on the lotsynctimer to age babies. I always use the Sim Blender.
kestrellyn
Scholar

I think it only appears if the baby is due to grow up that day. That's actually why I use it, to be sure I'm aging them up on the right day. I usually notice when the game pushes the Help With Birthday interaction, but sometimes I miss it and can only guess that it happened, so I usually check the lotsynctimer at the start of the playthrough.
HobbesED

I avoid the whole gather-around-the-cake kazoo blowing ordeal by pausing the game and canceling it out of everyone else's queue as soon as it appears. Then once the tyke-holding Sim puts the little one on the ground, I cancel it out of their queue as well unless their hunger bar needs the boost. I'll usually let a toddler-turned child grab a slice though. After all, every kid deserves cake on their birthday!
All of my Conversions, Creations and Stories may be found here:
HobbesED's Conversions and Creations

Now you've made me feel guilty. I only use the cake for aging babies up to toddler; toddlers just 'grow up' without it.

On a completely different note, pregnant Sims can't empty the cat litter tray - although they can clean up the mess when the cat decides the tray is too icky and does its business on the floor.
FranH

I have ChristianLov's "Visitor Manager" in all of my houses. I added a mod to my downloads that somehow changed the actions from it, to "leave", which I assumed meant that the pixel would do so.
I actually tried it. It didn't do anything at all.
Which is a relief. I'd hate to push that button and have all of them move out to never-never land!
Receptacle Refugee & Resident Polar Bear
"Get out of my way, young'un, I'm a ninja!"
My downloads of various stuff: https://www.mediafire.com/#myfiles (including funerals!)
AndrewGloria

Children falling asleep outside seems to be a cause for worry for their relatives.. 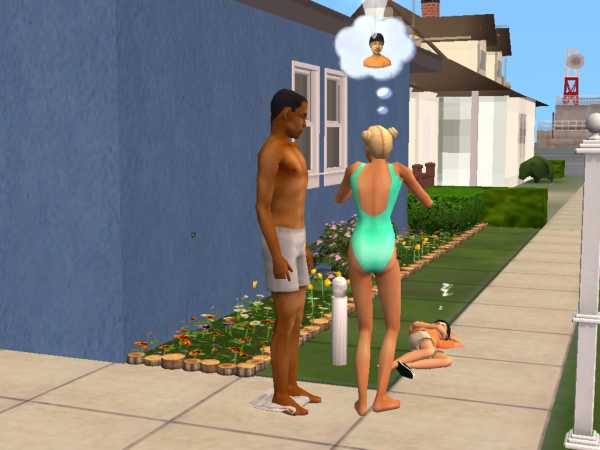 Nancy Philippine is worried about her little brother Scot. Should I worry too? Or should I just leave him in peace till he wakes up?

Later today Nancy plans to invite Scot to move in with herself and her adult lover Gerard. She's built a cute little bedroom onto the end of the house for him to sleep in.

(By the way, that's not Gerard in the picture. Gerard is out at work. That's Reed Wilkie who just happened to be jogging past. I suppose Nancy could ask him to help))
All Sims are beautiful -- even the ugly ones.
My Simblr ~~ My LJ
Sims' lives matter!
topp

Well, quite an appropriate action, I suppose.

If I saw a child laying on the curb visibly unconscious/sleeping, I wouldn't really just walk past them while only thinking about my next starbucks order.
DJ. who?
Essential mods, cheats, tips & tricks for The Sims: Castaway Stories || Felicity Island for TS2
"What do you have to be nervous about? You're someone on the internet." -A.M.R.
Annaminna

Let him recover a little bit energy and then wake him up, so he doesn't drop again before reaching a bed. It is thing what you really need to worry because sleeping much further will drop all other needs.
enebya
Lab Assistant
#8288

Sims always worry if a child or toddler falls asleep on the ground. I would like it if they could pick them up and carry them to bed, but they need to wake up before anyone can interact with them.
Rosawyn

I had a Popularity/Knowledge sim roll a want to get married after stubbornly refusing to roll a want to get engaged. I'd only ever seen Romance sims do that before, so this was a new revelation that sims without the Romance aspiration could skip over the engagement want.
AndrewGloria

Thanks for your suggestions about what to do after little Scot Philippine collapsed in the street from exhaustion outside his sister's house. This is how my Sims and I dealt with the incident:

Reed Wilkie thought the best thing he could do to help Nancy was to distract her by telling her a very funny joke. But after that he looked at Scot still lying there and agreed that it was worrying. At this point Nancy decided that it would take their minds off the problem if she and Reed played kickybag together. This they proceeded to do, staying outside, very close to Scot's prostrate form. A few minutes later Gerard returned from work. He went over and looked at Scot, but he didn't worry about it. Instead he had a thought bubble about Nancy -- maybe he thought she was dealing with the problem. He then joined in the game of kickybag. 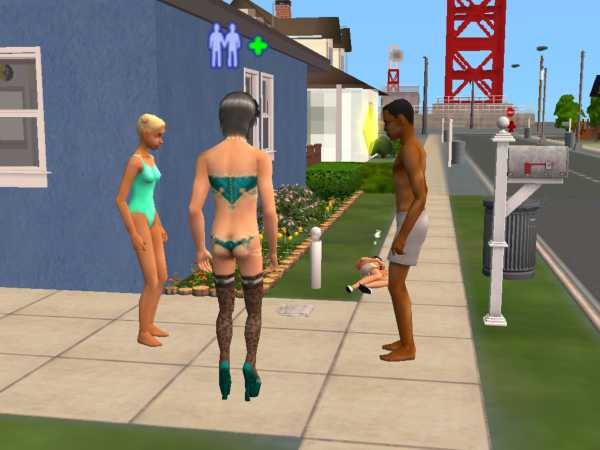 So at least they stayed near enough to Scot to keep an eye on him. Regan Capp was watching television inside the house, but I don't think she had any idea about what was going on outside.

After about an hour, bearing in mind Annaminna's advice, I woke him up. He went to the toilet and then went to sleep in his new little bed. All's well that ends well.

I agree with enebya that it would be good if older Sims could pick up the sleeping child. Reed Wilkie looked strong enough to do it, and he and Nancy could easily have carried him, though the three of them might have struggled to move inside the tiny 3x2 bedroom. It's even smaller than the bedroom I slept in as a child.

Nancy, Scot and I all thank you for your help! (Yes, Scot spells his name with one "t".)
All Sims are beautiful -- even the ugly ones.
My Simblr ~~ My LJ
Sims' lives matter!
Annaminna

Sometimes my sim children tend to go to sleep right afer school but I am not worried because homework mod wakes them up at 7 p.m. Now I have habit to catch all children who are awake at 2 a.m. and send them to sleep, If there is no option to sleep (They are rested) I will wait until option comes up and into bed they go. This way all my sim children can go to school fully rested and I don't need to worry.
sugoisama
Field Researcher
#8292

You can apparently right click on the face templates in CAS and it will morph the sim's face just a little bit to be more like the template, kinda like how you'd drag the bar in Body Shop. Learned this from Pleasant Sims on Twitter .
willow_kidd

If a baby throws up on a Plantsim, it will help satisfy their Water need.

It was my first time playing with Plantsims. I also learned they're very boring.
TadOlson

I discovered that playing my BACC which is like a ghost town espcecially when visiting community lots is more realistic than how things used to look in the ancient past on my old computer in a vanilla game.I used to have community lots overcrowded and fights breaking out between other sims all of the time and it ruined many towns.
TadOlson's Blog
inspiredzone

I've never actually loaded the 407 Edgewater Parkway lot (the purple gingerbread house) in Bluewater because I usually bulldoze it, but I just did today and it's worse than I ever imagined.
sugoisama
Field Researcher
#8296

If male sims want to use the urinal at a public bathroom and there are female sims in said bathroom, they will shoo out said female sims. I knew making that weird unisex bathroom at the arcade was a bad idea, but it served as a discovery at least.
TadOlson

@sugiosama -I hated that issue and got privacy hacks for washrooms to fix that one.I used to get that all of the time on my old computer with old games.
TadOlson's Blog
Rosawyn

I just put stalls in my unisex bathrooms.
TadOlson

@Rosawyn -I do that and also use a hack to remove that privacy requirement for washrooms and have a no naked emmitter hack because having sims getting shocked about a nakked sim showering on their own lot made no sense in my homesteaders challenge or the TOT challenge which both take place when that kind of behavior was not normal.
TadOlson's Blog
willow_kidd

Male Witch
I saw my first Male Witch yesterday when I went downtown on an outing.

I didn't even know they were a thing. Never really thought about it. But I've only ever encountered women before now.
Back to top