No, I'm just saying. Your graphic design and everything is great, but I dread the thought of having to redo it all myself should I ever want to use footage of Boroughsburg in an episode. God knows how to horizontally mirror dozens of textures and models. I could just mirror the footage, of course, and have normal English text instead. It's a tradeoff I've already had to make with song lyrics.

I'd probably just build a city street set if not for the fact that your streets look considerably better than anything I could build on a singular lot. Maybe I'll have both.
Hypocrisy is only okay if I do it.
( Join my dumb Discord server if you're into the whole procrastination thing. But like, maybe tomorrow. )
jje1000
Mad Poster

Quote:
It's a personal preference more than anything in my opinion, like how you keep saying that the world's too small for you among other things.

So keep that in mind that before you toss around words- there has been thought put into this and reasons have already been given as to why things are the way they are. Like what you say, if people want English text, they can flip their footage around as the false Simlish is consistent enough for that to work. Otherwise, worldbuilding (Simlish is largely unreadable) & meeting Simlish halfway there is superior to forcing simmers into an English-only world.
nitromon

That's how it is with creation, you can't cater to everyone b/c everyone has different little preferences about everything. I'm kinda like Pi, the backwards English was bothering my OCD (my brain keeps trying to flip those words around

), but like I've said, I knew the moment I saw it that it was a stylistic choice and I'm fine with it.

Whenever I upload a lot to MTS, I always have a ton of questions what if this and that... and sometimes I find a compromise such as putting out 2 versions of the Oblivion tower. But then later I just realize people are just going to modify it to whichever way they like so I shouldn't stress too much about it.

Anyways, thanks for the updates and continuing work. I'm on a build freeze right now, not building anything, but when I get out I'll help fill out a few more lots.

It looks amazing, but I have a very high-end PC and it still lags when you play huge worlds due to the game being 32-bit. I've just learned to play EA worlds and medium costume worlds. It drives me insane if there isn't a smooth flow in the game.
what does his name even mean?
AGuyCalledPi

Like you said, meeting it halfway is ideal. I'll make sure to keep all the unimportant graphical details in my episodes in Simlish (even though they're supposed to be English speakers and writers) but when something needs to be understood I'll do it in English.
Hypocrisy is only okay if I do it.
( Join my dumb Discord server if you're into the whole procrastination thing. But like, maybe tomorrow. )
jje1000
Mad Poster

Same here, lag drives me nuts and this is why Boroughsburg is a medium world.

Large, heavily-detailed worlds simply do not work in terms of long-term gameplay, and Boroughsburg is more detailed than most worlds.
simsmidgen

Made one more apartment for Boroughsburg, you can find it here

Every town needs a nerd shop, now Boroughsburg has one, too! This lot features space for your hobbies, a drawing table, a computer area, video gaming corner as well as some arcade games, a place to browse through your favourite comic books, and of course the hobby register. Next to it is a Billiard parlour and bar so that you won’t starve while having so much fun.

This lot was built for 8 Empire Street in Boroughsburg but of course can be placed everywhere else, too. 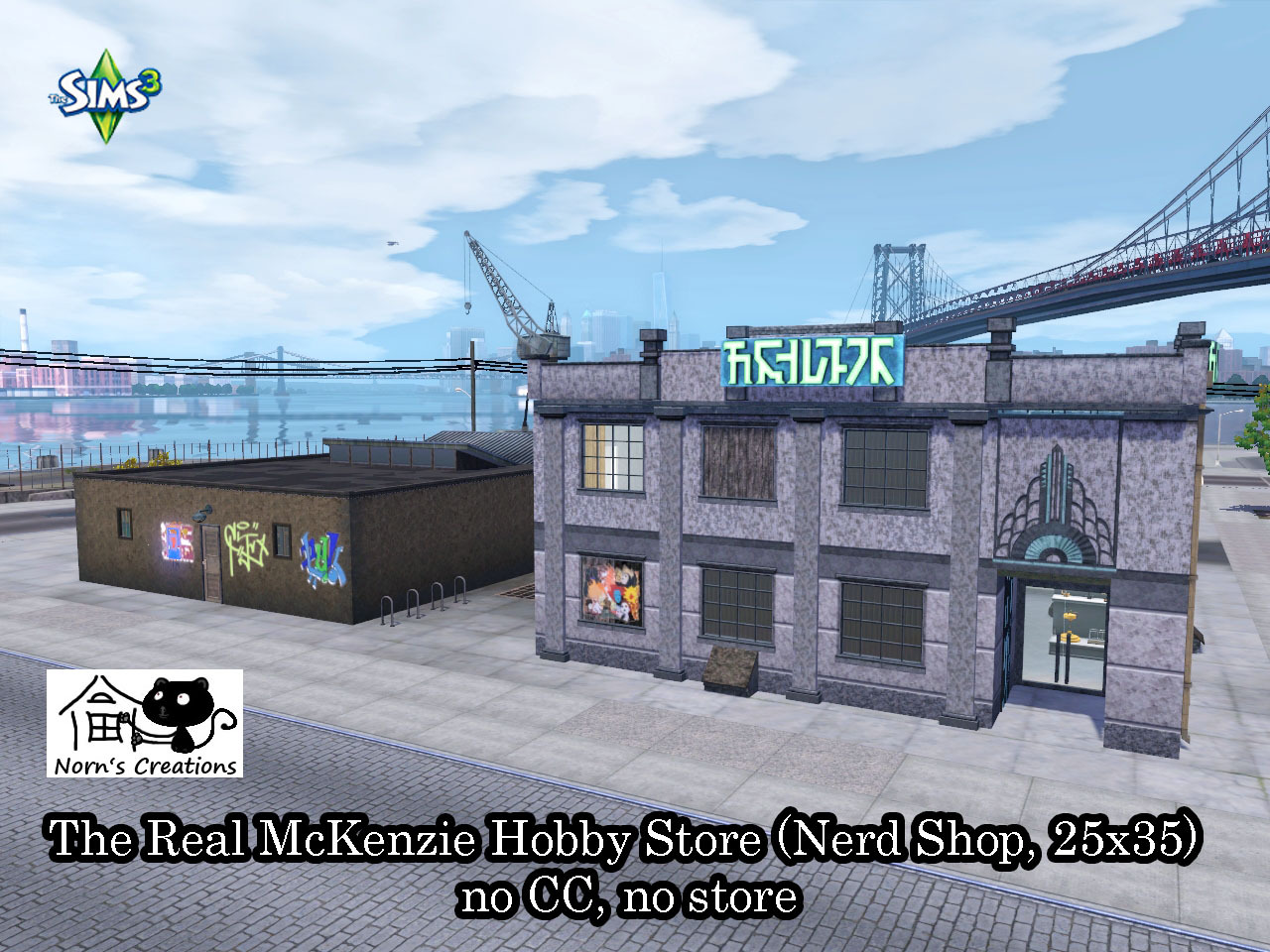 Another lot done: this time is 1-23 Landgraab Ave.

Quote:
I paused it due to the lack of ideas, and then I worked on other lots. I can pass the library file if U want
simsmidgen

Yes please! I'll take it how ever it is and finish it myself if needed. I love the shell! thanks

This message has been deleted by HugeLunatic. Reason: use queue to share cc
simsmidgen

Ok, starting to fill in the world- please let me know what lots are permissible to be used.

Just as a disclosure, there might be some small tweaks done to lots to help them fit into their surroundings a bit.

Below is a map of the lots, the black dots indicate lots that have been accounted for. White dots are lots that will be adjusted in size in the final build, so builds for those may have to happen later on. 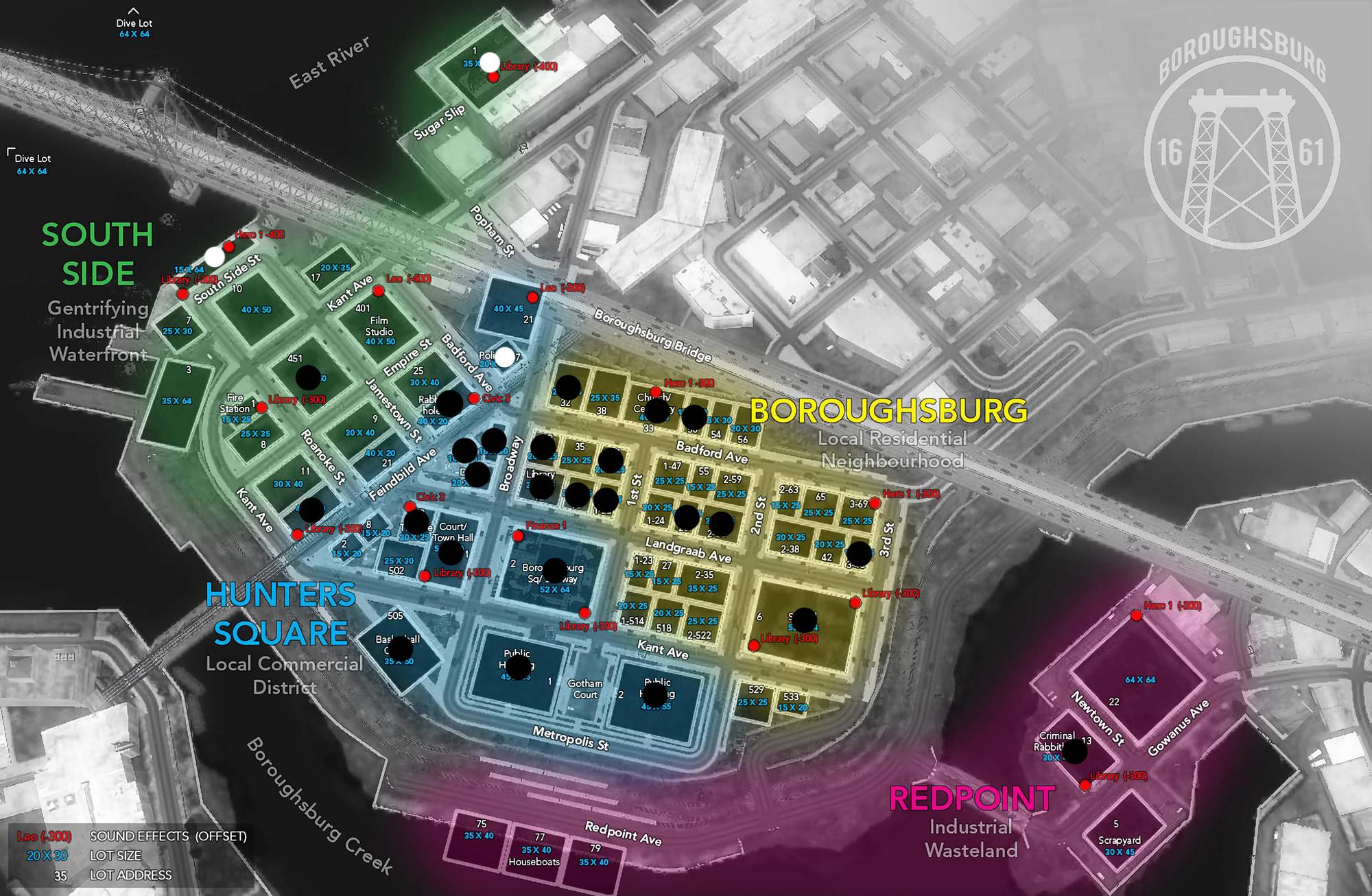 man, i want to build again. been so depressed lately with personal problems, put building on hold

I don't have any plans with it though, just letting you know-- but even if I did, I'd say build on!

Variety is always good, so it wouldn't be an issue if a few lots have more than one creator.
AGuyCalledPi

These shell imitations are pretty cool but it makes me think, why not cut the doors and windows out of these shell meshes and place them over actual lots? That way they look like realistic shells from afar, and when the lot is loaded you can hide the shell to look inside.....when you zoom out, you can page up and make the shell visible, but you can still look inside.

It's an idea I've explored earlier with building a subway train. Sooner or later I'll need a subway train lot and while it looks half decent on the interior, the Build Mode tools could never create a believable exterior. So I'd measure the dimensions of the fake subway interior and mesh a car body around it. Or better yet, make it modular (like in actual IRL vehicle bodies) and have door and window meshes that replace entire wall segments with some curved, detailed body panel. But that's a vehicle thing and we're talking about buildings with entirely vertical walls here.
Hypocrisy is only okay if I do it.
( Join my dumb Discord server if you're into the whole procrastination thing. But like, maybe tomorrow. )
Kylaaab

I completely agree, but I wouldn't have an idea of how to go about accomplishing that. I haven't seen any downloadable shells that allow sims to pass through them before, but it's got to be possible considering EA's skyscraper objects.. I tried briefly to change the flags of a non-Boroughsburg building object, but since I have no knowledge of mesh editing and assigning entrances, I wasn't able to get anywhere with that.

Though, if anyone figures it out and makes some of these Boroughsburg shells rout-able, I'd definitely find good use for them. I could probably even place them over some of my existing lots (If they cover the building up entirely, if even by a thread, that is).
AGuyCalledPi

Pretty sure you can quite easily remove an object's hitbox and make it no-clip......don't ask me how, though. Personally I'd clone like a floor plant and replace the mesh with the building shell so it only takes up one tile.
Hypocrisy is only okay if I do it.
( Join my dumb Discord server if you're into the whole procrastination thing. But like, maybe tomorrow. )
jje1000
Mad Poster

TBH turning the deco buildings into shells didn't happen because a lot of them are less detailed than what they needed to be for close-up gameplay, and often times they don't really line up with the grid (which makes matching windows impossible)- it would be too much work vs starting over. Furthermore, no one has really cracked the shell code, as it's quite complex, unfortunately.

However, there has been some experimentation on alternatives.

As part of initial experimentation, this building is comprised of individual 'shell' pieces that are placed side-by-side to form a building. The best option for a realistic facade, but not very flexible: 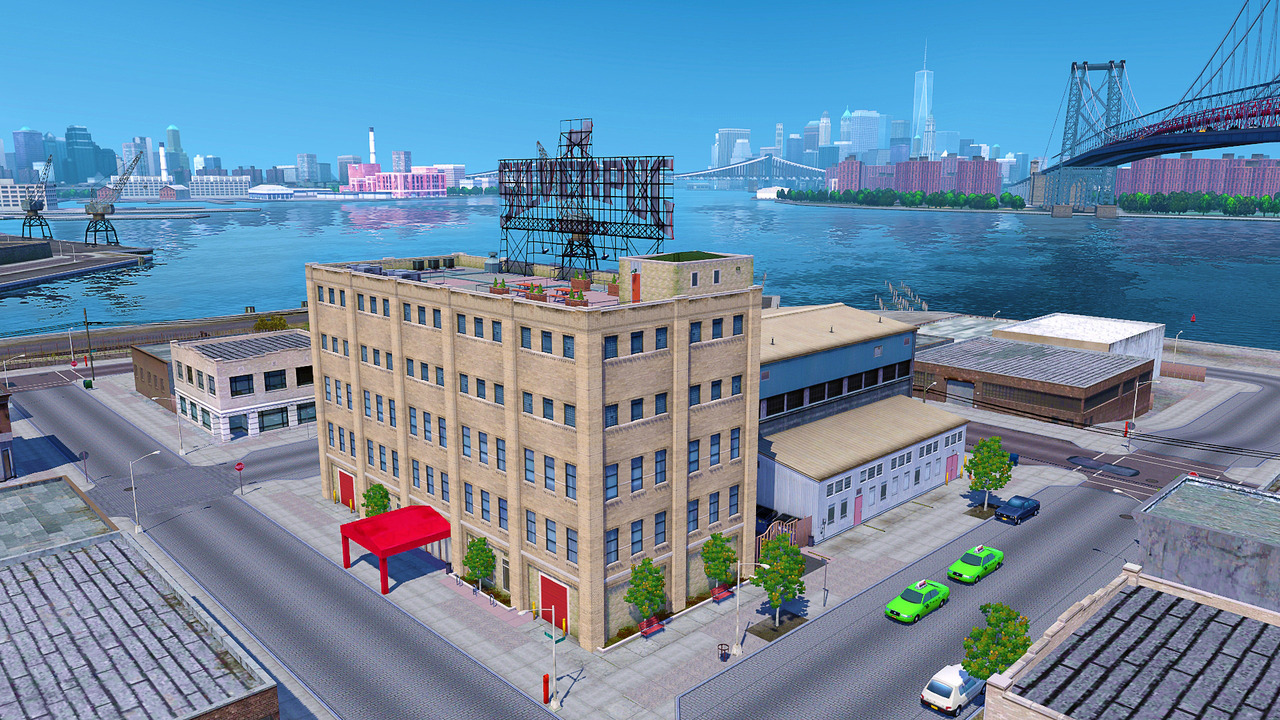 There also has been some experimentation with shell 'windows' (only the windows & matches up with that one University sash window) that are very low-poly, reflective, recolorable, and light up at night:

I strongly believe this option is the solution to the shell issue, combined with the prudent use of CAST (which is surprisingly flexible).

The main issue with LOD lot imposters is the awful quality of the windows- if the majority of non-usable windows can be be replaced with these (which look great over LOD lot imposters, and also light up at night), I think it offers the most flexibility in terms of building creation and aesthetic concerns. There are two updates that need to be gotten through first, but there should be more experiments with these in the coming months.
AGuyCalledPi

I think that's absolutely the way to go, and using shell meshes for wall and window pieces also allows for details that would normally be impossible to create.....bumps, ledges, slants, angles, non-repeating imperfections.....
Hypocrisy is only okay if I do it.
( Join my dumb Discord server if you're into the whole procrastination thing. But like, maybe tomorrow. )
wangsiyunjocelyn
Test Subject
#148

Hi guys I have a question about cc conflicts. I download and play this map and I love it so much! However, the train and the moving vehicles on the bridge are not there...I delete all my ccs and leave only files of the map and reload the game. This time the train shows up but the moving vehicles are still missing.
is there anyone having the same problem? And do you have any suggestions?
Thank you very much!!
AGuyCalledPi

Dumb question but do you have World Adventures? Both objects were cloned from it, I believe, to varying degrees and it may be required to support them.
Hypocrisy is only okay if I do it.
( Join my dumb Discord server if you're into the whole procrastination thing. But like, maybe tomorrow. )
obiokoli10
Test Subject
#150

Hey, I'm new here, but I've been researching Boroughsburg since January - it's really nice and it's probably my favorite Sims 3 world!
Referencing this map, I noticed a lot of these lots could be filled up with Mspoodle's lots.

I know you're collaborating with @mspoodle1, but I just want to make sure these beautiful lots find their way into your Boroughsburg fill-in - I noticed you hadn't marked them as "accounted for".

Also, these are some lots houseof84sims has furnished, but they use a lot of cc - might be useful for anyone who wants to redo with TS3 furnishing:
http://houseof84sims.tumblr.com/tagged/boroughsbur

Lastly, you might find this thread useful - it explains how to add functional subway stations (the ones used in Bridgeport) to an existing town. But I understand you may not want these, as you already have the main subway station:
https://forums.thesims.com/en_us/di...o-sunset-valley
Back to top