The hyenas thing was a joke and not even one of those "not sure if it was a joke or he's just being mean" type things. It was clearly a joke. And even if it wasn't, I for one take pride in being compared to the majestic and graceful Hyena! 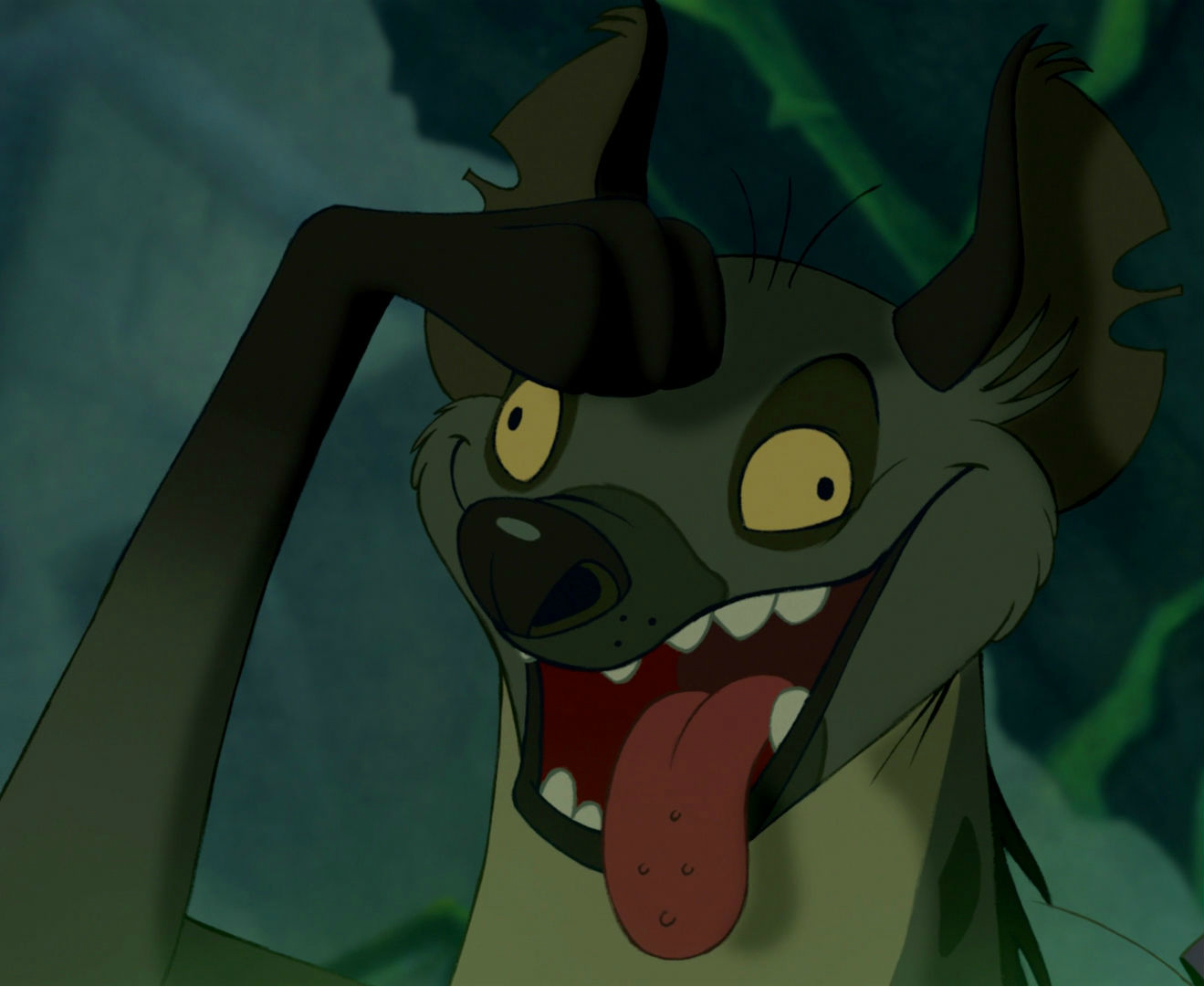 They have some outfits that still make me think of maternity clothes (like the long dresses).
RoseCity

I think it didn't come across as snarky because it was how he sincerely felt - like a 'piece of meat' about to be torn apart. Correction: "chunk" of meat.
litlegothcat13

Quote:
If this was another company, I actually might have appreciated it, since it shows each guru's personality and that they're not mindless robots trying to make everything positive and licking out boots. But with the way things are now, it feels like an attack at times. All I want is some honest info about our big questions, and being met with snark in regards to that when I have ten years of frustration built up with this franchise is not pleasant.
ZenGarden

Quote:
If he can't even give us simple "yes" and "no" answers, I don't think he can afford to make snarky jokes. Grant does the same thing on Twitter, but people are quicker to jump on his ass about it. I don't understand why Graham is treated like a saint and Grant is this snarky douche who doesn't know how to speak to fans.

God, I like Azure, but the clear avoidance of the indirect pool question

Quote:
Honestly, it was a pretty on-point description, considering the huge unloading of... emotions... that occurred at the time Graham last posted here:

He also states that sims' favourites (food, colour, music) are no longer a thing because "[t]hey didn't do much at all."
Margaret Pendragon

I wasn't offended by the hyenas comment...we kind of are, and I appreciate that he takes the time to mingle here despite that. That being said, that doesn't alleviate any of our questions. If they cannot comment on babies and toddlers, I want to know WHEN they will be able to do so.
2.18: His Empty Reality
2.17: It All Adds Up
2.16: Better Than Sex

It appears to be all the reward traits and bonus traits. So if you want a Handy Sim, for example, you have to fulfill an aspiration first. I imagine unlocking those will be an early mod.

It wasn't even a snarky joke though. He was literally saying he's scared to post here sometimes because we tend to jump on gurus (or any bit of sims news for that matter) like rapid hyenas. Was he lying? I think you might be a little too quick to demonize him like how some of us are too quick to put him on a high pedestal sometimes. The guy is by no means a jerk like Grant or phony like Ryan. But he's also not perfect. He does the same "no comment" bullshit that the rest of them do and he did come on here without really giving us anything of substance. We acknowledge that. But the hyena thing is not worth bitching over :/
Heldin90

Quote:
Of course, right, didn't think of that. Thanks!

Quote:
Oh, so just throw it out then. That's a way better solution than figuring out a way to make it work. If they did that the Sims might get some more dept, and we don't want that, no senor! Like CAST!
Yeah, still pissed over being no signs or any hint of an attraction system either. Deeper sims my butt, how can sims be so deep and emotional, and their stories be so much weirder if a sim can barely distinguish two different sims in an attraction sense? Again, we originally got this system almost 10 years ago.

Edit: Also, personal opinion, if the gurus aren't going to give us direct answers, then I don't care any more. Trying to read all their statements has lead to nothing but rumours. The last one of the game being almost 99% complete being "sarcasm" completely sapped my mood for anything else. "yes", "no", "we don't know if we have time to fit it in, so maybe" is all I want to hear at this point. I'm not saying any of them are jerks by joking or being themselves, but at this point I think it's more counter-productive than anything.
heaven

I'm not sure if it's just me but I hate the idea of the gallery. Yeah, it's a pain in the ass to need to quit your game to install things (which you didn't if you used sims3packs, it just took forever to install) but I'd MUCH rather download, check things over with custard, convert things to packages if they weren't already and keep meticulous back-ups. I've got my content so organized that, even with 5GB+ of CC and a good bit of store content, I know JUST where to find it, both in game, on my computer and links for linking and crediting. I also go through and recategorize stuff to not be valid for random and fix CC that creators have made available for every category. I don't WANT to put stuff directly in my game. That seems like it's asking for trouble.

When he asked her about how the big the towns were in comparison to TS3, she seemed almost confused. Azure, if YOU look confused (and relieved when he moves on to a new question), how do you expect us feel confident?
Heaven Sims | Avendale Legacy
"On the internet, you can be anything you want. It's strange that so many people choose to be stupid."

Interviewer: "How big is the town now, in comparison to The Sims 3?"

Aww sweetheart, I know you are an emotional, romantic but please don't take it personal. I believe Graham was just joking. You know I don't ride their jock when they come in here, so you can trust me. *HUGS*

I really do hope that maternity clothes can get flagged in CAS so I can control which clothes will be OK. I really don't want to see this as maternity.

Resident member of The Receptacle Refugees
Let's help fund mammograms for everyone. If you want to help, Click To Give @ The Breast Cancer Site Your click is free. Thank you.
heaven

Exactly! Doesn't exactly foster confidence and goodwill.
Heaven Sims | Avendale Legacy
"On the internet, you can be anything you want. It's strange that so many people choose to be stupid."

I'm actually a little scared of their attempt at attraction. Their first attempt in TS2 (turn ons/turn offs) didn't even work (the worst my sims did towards people with their turn offs was get an angry thought bubble and then continue to flirt with that person) and their second attempt in TS3 worked TOO well. I think I'm good with being the one who decides if my sim is attracted to somebody or not. I clearly can't trust the game to decide that itself XD
litlegothcat13

Quote:
The good thing about TS2's system is that it was well thought out, it was just implemented rather poorly. Mainly the negative effects weren't that high, so Sims could still fall in love with anyone. With a simple mod from MATY though, it made attraction extremely important on my game. If the sim had a bolt towards another sim, they could still flirt and maybe higher (if you also had ACR or used that aspiration reward hot tub), but getting a crush and falling in love was borderline impossible. So marriage is out. Negative bolts, don't even think about a wolf whistle! (It's the romance mod if you're curious)

With the way TS3 attraction system worked, you could do nothing with it. The most you could do was turn down its effects so sims weren't stalked by everyone and their uncle, but that also lowered the chances of a Sim being attracted to another sim so much it was almost impossible. At least with a small poll of sims it was.

More emotions. *sigh*
Don't know if this has been posted.
https://www.youtube.com/watch?v=eCLyme1KMEc
heaven

I use this retuner mod, the Variety version, for attraction in TS3 and it seems to work pretty well. I definitely miss turn on/offs though and wish we had a little more control. I also miss a legitimate zodiac attraction rather than these 6 all are compatible and these 6 are neutral crap.
Heaven Sims | Avendale Legacy
"On the internet, you can be anything you want. It's strange that so many people choose to be stupid."

wrt hyenas and pieces of meat, I guess hungry hyenas are a lot more scary than well fed ones. But what can any of us do? They've all been told to keep us hungry. What is more scary, the hungry hyenas or the furious lion back at head office?
"You can do refraction by raymarching through the depth buffer" (c. Reddeyfish 2017)
HystericalParoxysm

20k+ posts is enough for any thread! Groaning under its own weight, the TIS/H/RAITS4 gives birth to a shiny bouncing new TS4 Chat Thread!

This thread picks up where the old thread left off so feel free to quote posts from this one and continue the conversation. Just please read the first post, okay? Don't make me have to get all modsy up in here, I hate doing actual work.
my simblr (sometimes nsfw)