The Sims 2 - Social Gatherings
I thought that it might be nice to have a thread for pictures of social gatherings - including parties, outings and just general gatherings with friends! There are separate threads for weddings, formal events/parties, birthday parties and gatherings that occur whilst your sim is at college but what about all of the social events that don't fall into those categories?!

I for one enjoy sending my sims out on outings (though I generally use the unscored option, for longer lasting fun!), having them throw parties for no particular reason and generally just hanging out together, be that at home or out and about. When the sims involved are all part of the same family I can share the pictures here, but a lot of my sims like to spend time with their friends and I'd like a thread to share their pictures too :-)


Ruth King didn't like the way everyone's lives seemed to be changing. Apart from her own life, that is! She missed the time when it felt like it was the "green-skinned girlies" against the world - hanging out together after school, chatting about boys and hobbies and plans for the future and anything else that came to mind. Now things were moving on - her older half-sisters and her twin brother had all moved out, Rebecca Barnett to live Downtown, Rachel Barnett to live with her boyfriend and his folks and Ryan King to go off to college Downtown. And it wasn't just her family, either - the final two "green-skinned girlies", Andromeda Ottomas and Stella Goth, were also at Downtown College, living in the same dorm as Ryan.

So when she discovered that she had a coupon for a free meal Downtown she decided to get the old gang back together for an outing. Ryan couldn't make it, so she invited Tommy Ottomas instead - he was a bit older than the rest of them, but he seemed nice and he was pleased to be invited along. They went to Speedy's Fast Lanes Bowling & Eats, so of course they started the night off with a spot of bowling!

Andromeda and her boyfriend Adam Carter carried on bowling, but the others fancied a game of pool. There was only one table, so Rebecca and Noah Carter just watched whilst the others played, but it was nice hanging out together. Just like the good old days!

When it was time to eat they couldn't all sit together, which was a shame, but it was nice to have a chance to chat to each other. And the coupon definitely came in handy - Ruth wouldn't have fancied paying the $137 bill! Everyone had a great night, and it was almost 4am before they all parted to head home.

It's odd that it's taken me so long to post here, since I have so many social gatherings of various types; but sometimes it's hard to place a picture in that context if it wasn't what I was thinking of when I stuck it in the "Holding for Upload" file. I'm afraid these are all campus functions - but people don't post often enough in the dedicated YA threads for me to run through my YA stuff without double posting. 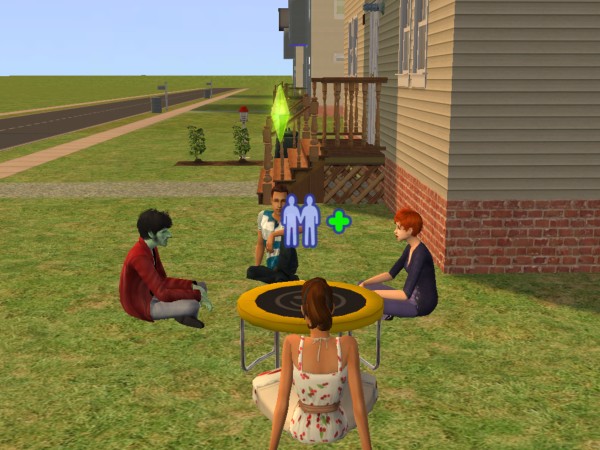 Dixie Land influenced her big sister Mary to talk to Woody Weiss at a party after the great Woody/Virginia/Max triangle blew up. And this happened, all by itself. Obviously, Dixie asked Mary, whose high nice points make her an excellent listener, to mediate among the parties. I wonder whose idea it was to gather round the trampoline? It has the salutary effect of blocking Max and Woody from getting in each other's faces, making it harder for them to come to blows. 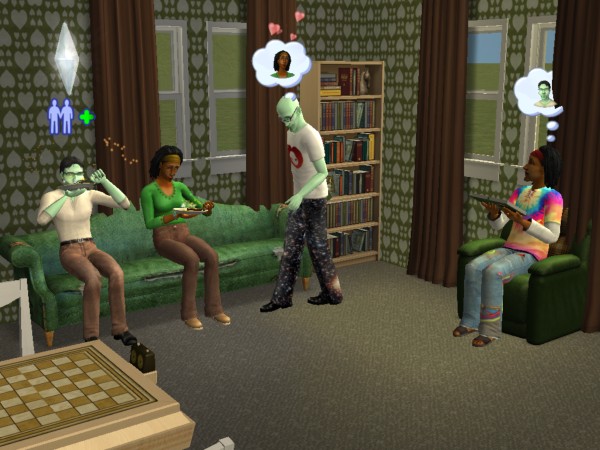 Frank Munny's party is threatening to turn into a study group. 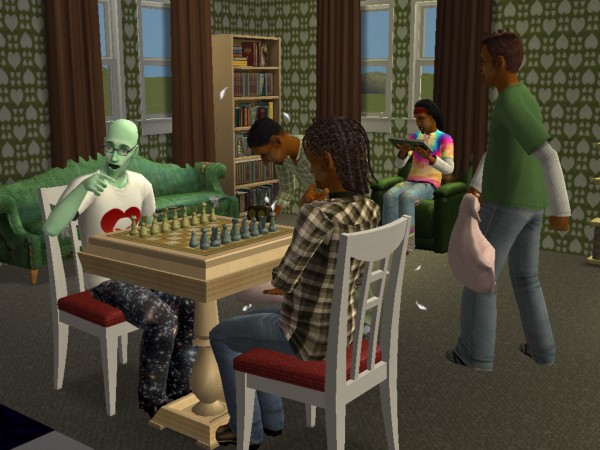 Crisis averted - no thanks to his brother Mark! 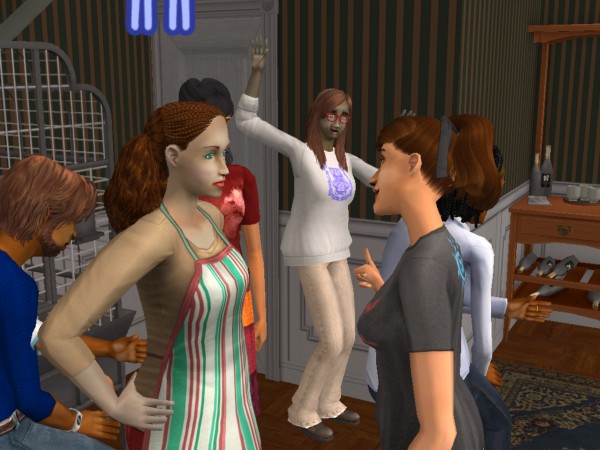 At a little sorority mixer, a couple of the guests have clearly come in from the cold!
Ugly is in the heart of the beholder.
(My simblr isSim Media Res . Widespot,Widespot RFD: The Subhood, and Land Grant University are all available here. In case you care.)
Rosawyn

Oooh! There is a thread for this!

Agora and Greg recently hosted a Hanukkah party and naturally invited the other Jewish couple (who happen to live right next door), Alexa and Mickey!

They all enjoyed some raspberry doughnuts together:

Next Hanukkah the kids will be old enough to participate too!

Agora and Greg's son Skyler aged up into a toddler during this party, and while Alexa and Mickey's son Sterling is about a day older, they're both still a little too young for doughnuts.

Party Time - Catherine's Palace
Recently, I went to play with this "French" royal family who live in my grand abode called Catherine's Palace. Their young prince & princess grew up and decided to go to College. This royal family seems to have time to throw parties ever couple of days by inviting over the many acquaintances the Queen has made. Queen Maria of France runs a store with paintings she sells at Very Expensive prices. Below are some images of what went on from one of the parties. Thankfully, the cops didn't come this time around to break up the gathering.

Do note that these guest may not be historically accurate, nor be presented in what other Sims would consider "normal" attire. On the other hand, these guests that know the Queen may be helpful to her in the future!

Check out my latest version of Superman's Classic Uniform for The Sims 2.
See what images I have posted on DeviantArt as well related to The Sims 2 and designs.
Also check out My Website to see my superhero uniform creations for The Sims 2. THANKS!!!
leah10006 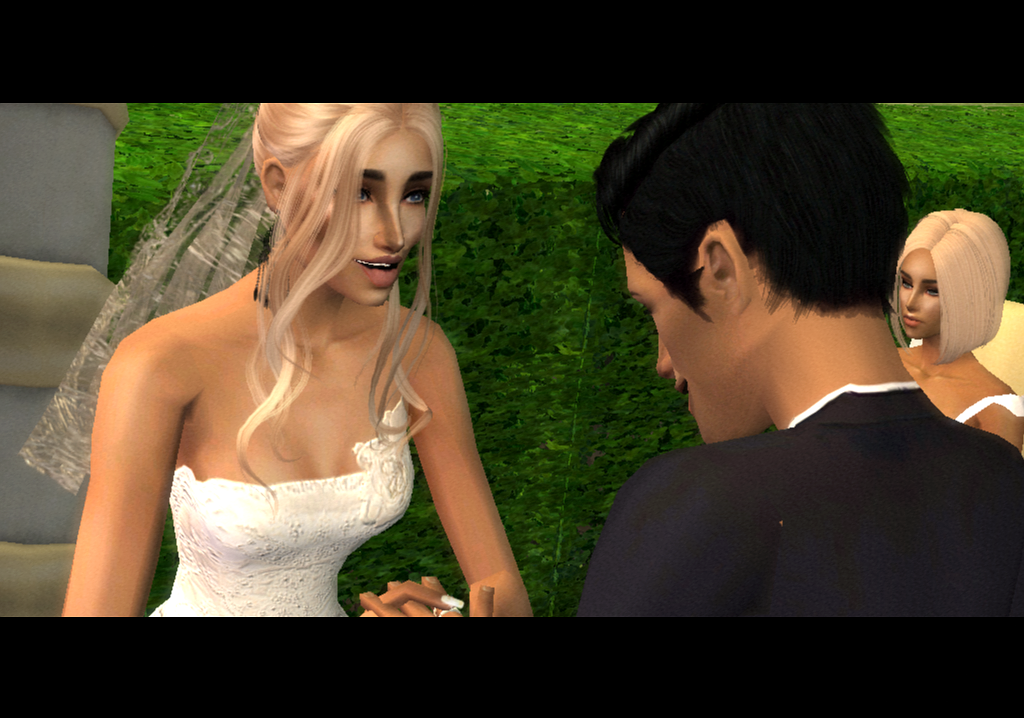 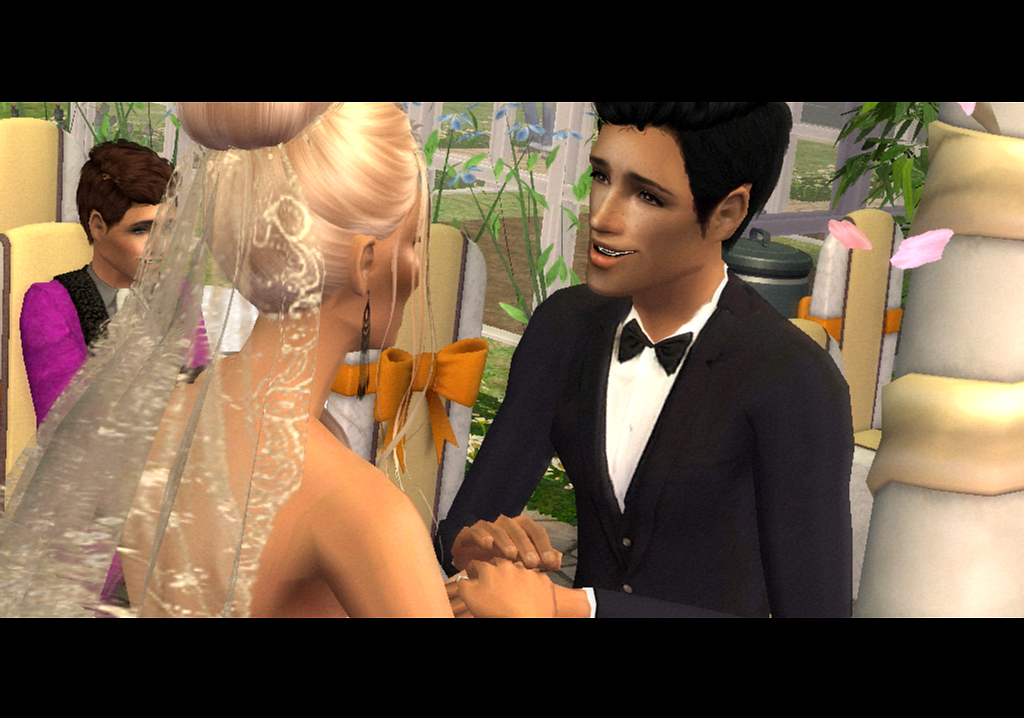 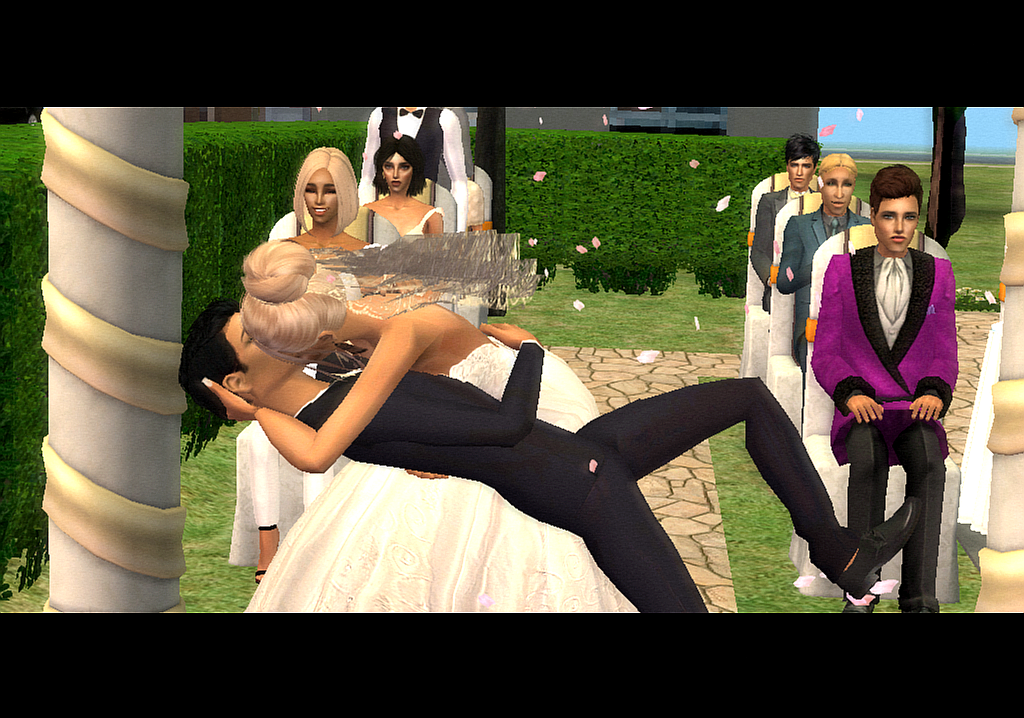 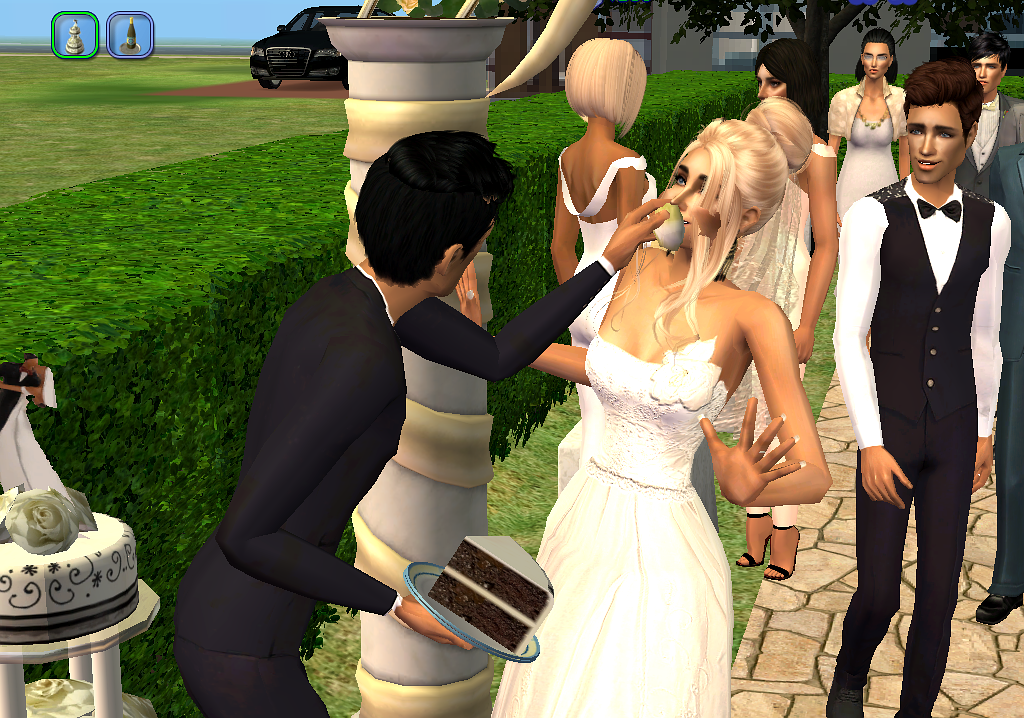 in my BACC hood oday bay the population isn't high enough for a career in education,but i still thought they need an education so i've sent all children to the founders home for school lunch is randmas comfort soup-yum!

and yes the teacher did just give birth...
I May Be Life Dumb But I'm Sim Smart(mostly).
My Tumblr
AndrewGloria

Where two or three are gathered together (Matthew 18:20)
Sunday Service at St. Simeon's Parish Church, Veronaville 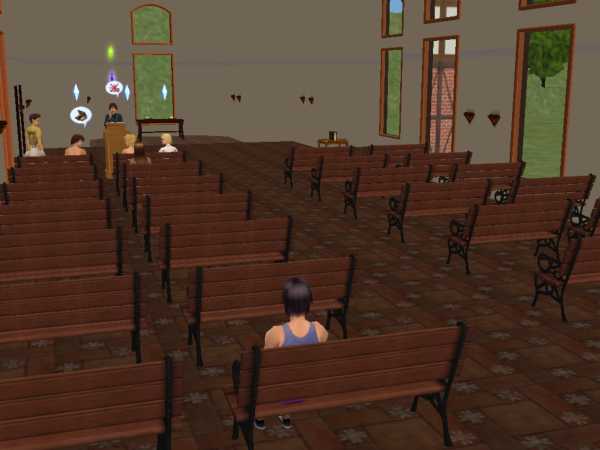 The Reverend Elspeth Anderson is preaching a three-hour sermon to her small but young congregation.

I wasn't sure which thread was most appropriate for this picture, but it is a social gathering, albeit a small one -- in a big space.
All Sims are beautiful -- even the ugly ones.
My Simblr ~~ My LJ
Sims' lives matter!
The Veronaville kids are alright.
simsample

I have a few retired families at the moment, and they like nothing better than to invite as many people over as possible and smustle! If I create a Sim myself, I give him or her a food-related last name. After Bo & Liz tie the knot, she'll be Liz Bacon Waffle!
AndrewGloria

Political Intercourse in Veronaville ?
I believe we're not allowed to discuss politics in this Forum, but it seems our Sims have no such inhibitions . . .

Is Enid Smythe a Bolshevik? She just threw a water balloon at Alexandra Romanov, until recently Tsarina of all the Russias. 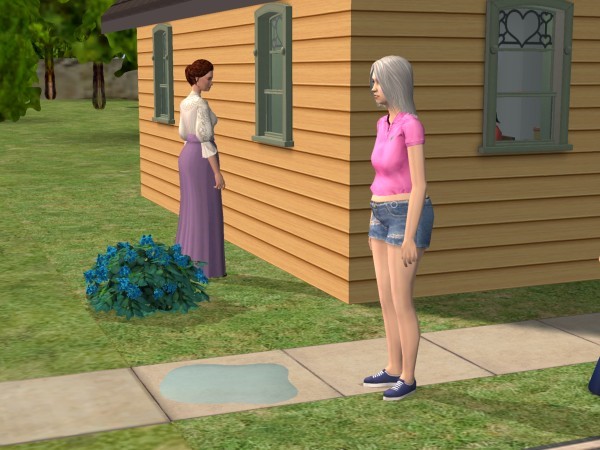 Mind you, the next thing she did was mop up the puddle -- with the former Tsar Nicholas looking on. 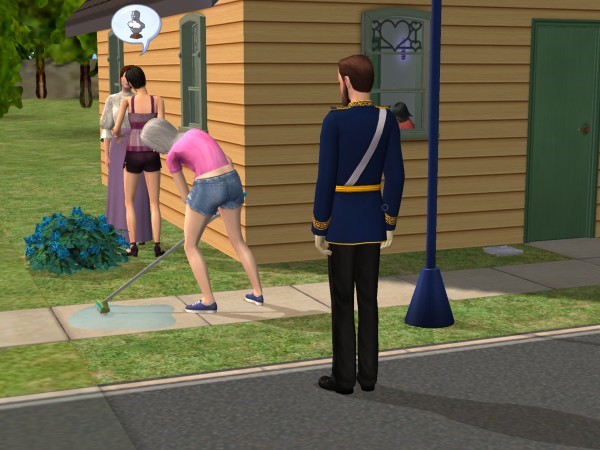 Enid however lost no time at all in getting to the table when their young hosts got the sandwiches ready. 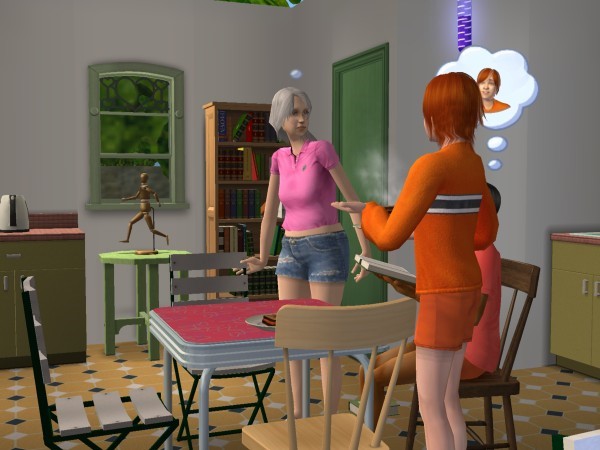 Perhaps Jodie Larson is more to Enid's taste than the Romanovs. They both seem to like the young boy who is serving them their grilled cheese. 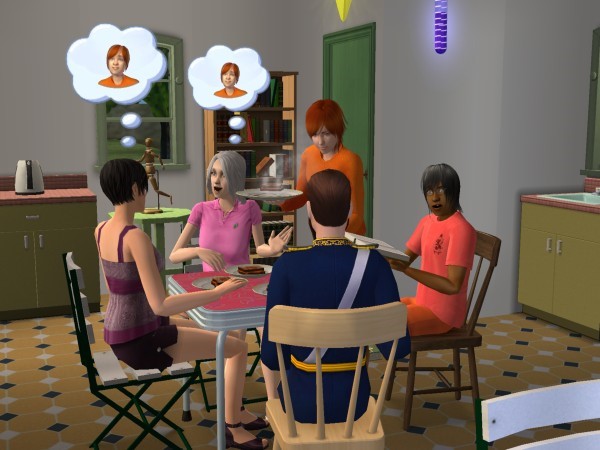 Jodie in turn has no qualms at all about telling the Romanovs exactly what she thinks about politics. 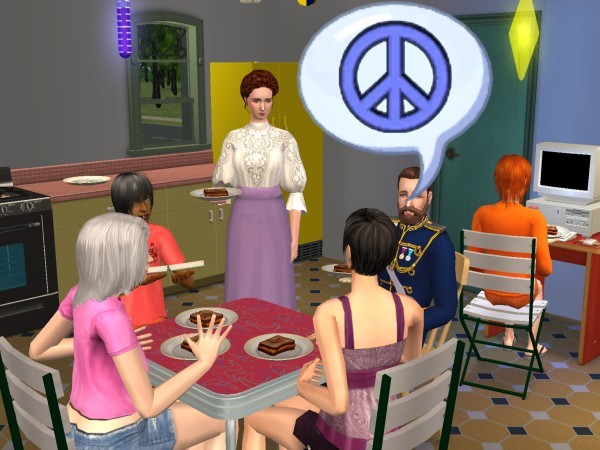 It's this ability of the game to come up with something totally unexpected that makes this game so fascinating. I thought this was just going to be the routine visit of the Welcome Wagon to a couple of young townies-to-be.

When Grand Duchess Juliette Capp decided to grant the threatened Romanov family asylum in Veronaville, I saw it has a simple act of kindness and mercy. It seems though that some of the locals see it as political, and some of them are clearly not too happy about it. This is historically interesting; I understand that it was fear of such a public reaction that caused the British Royal Family to fail to grant the Romanovs asylum in Britain in 1917. I still think it must surely be better to give the family the chance of a new life in Veronaville, than to leave them to the grisly fate that awaited them in Real Life. Especially the younger ones. But perhaps I'm being politically naïve?

This has also shown me a side to Enid's character that I never even glimpsed before. She's only been living in Veronaville since February 2013!

All Sims are beautiful -- even the ugly ones.
My Simblr ~~ My LJ
Sims' lives matter!
The Veronaville kids are alright.
simsample

How many sims can you get to hang out at once? Zach kept rolling for having a family reunion, and I knew I had to organize it pretty for picture purposes

Parties in the sims are like 5 minutes and it took me like 30 to make everyone sit and eat at the same time. He even wanted to hold his new grandson and I didn't know how to include him in the photo, and since he doesn't live in that household, I couldn't sit him down in a chair like I originally wanted to.

It turned out well anyway I think! + My one sim I thought would be single during his adulthood ended up booty calling his crush to join the party. I loved that he did that! And now he has a girlfriend!