Create A World - Tutorial: Driveways in CAW - How to Make Them

Tutorial: Driveways in CAW - How to Make Them
Ever built a house, and then wished you could have a proper driveway, instead of just a sidewalk along the entire side of the lot? 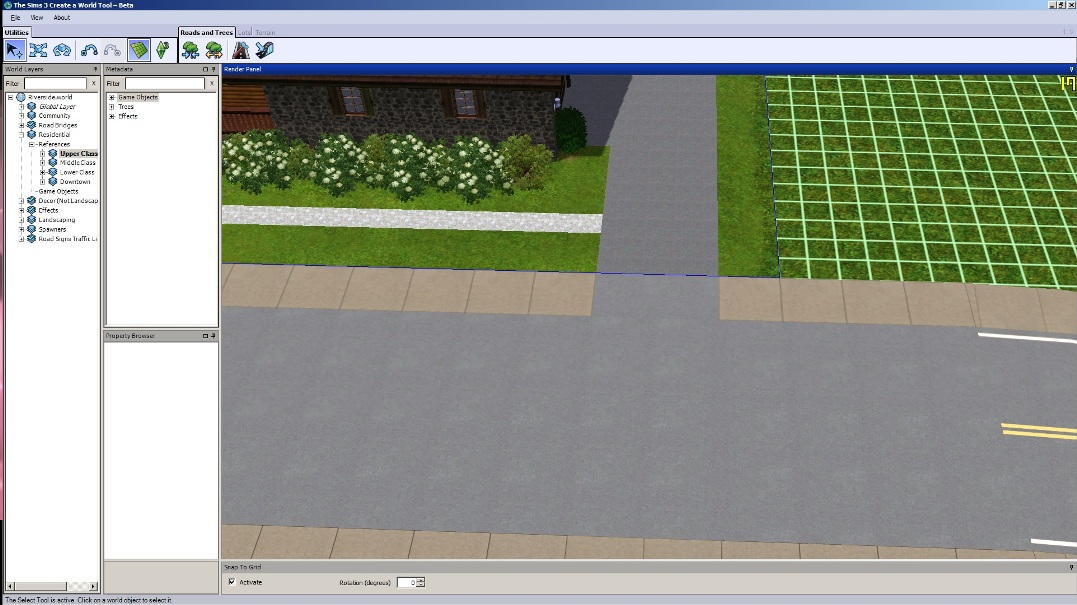 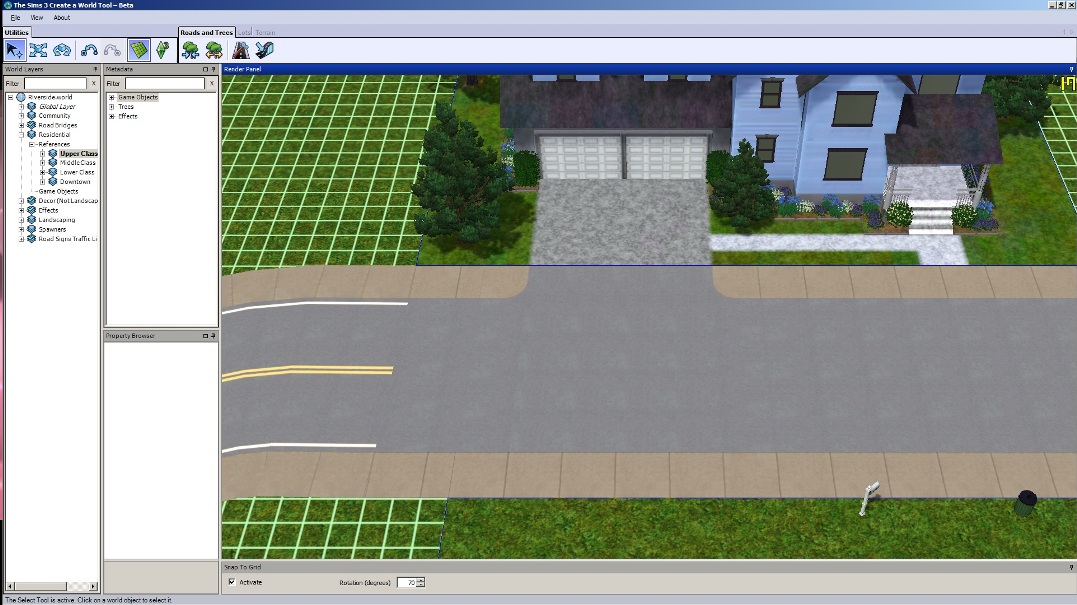 In this tutorial, I will tell you how to do exactly that!

Before I continue, I'm going to make three assumptions. First, that you know how to place roads. Second, you know how to make custom roads. Finally, I'm assuming the nearby lot, and the road were placed with the grid. While this method could conceivably done without the grid, it will be much harder to do this.

There are two methods to go about this. I will start with the slightly more difficult method, but I assure you that it's still quite easy to do. I'm also starting with the first method, because it works for just about any width of driveway, unlike the second method. I should also note that I used the base game road in the pictures, although the results will be much better if you use custom roads.

So without further ado, the first method.

This step is very easy. Just find a place where you want to place the driveway.

For the purposes of this tutorial, I selected a house where the driveway is four tiles wide, the width of one standard garage door. 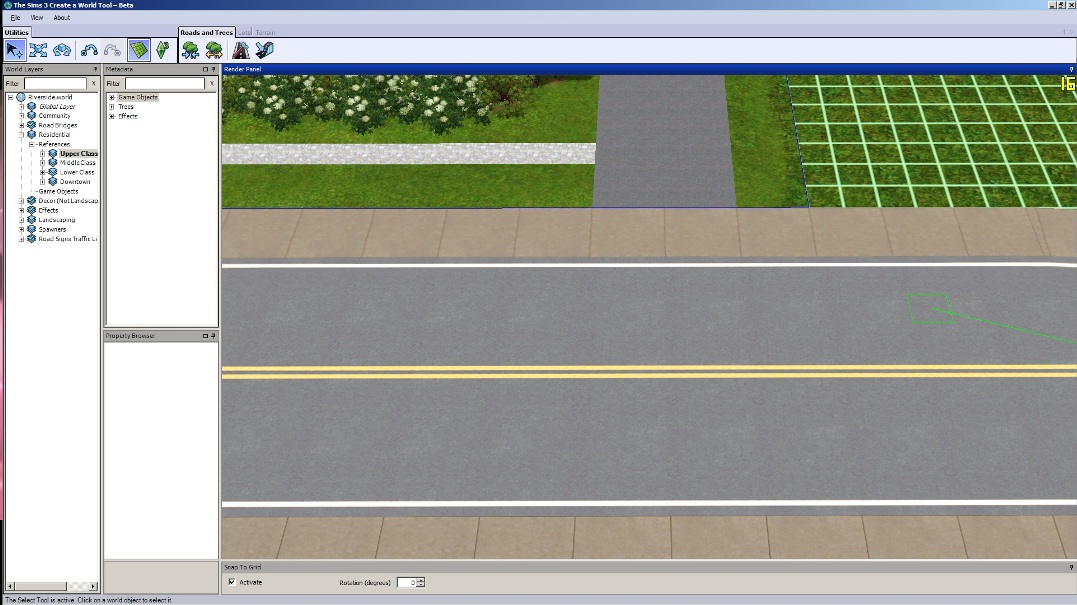 Now you want to create a gap, like the picture below. You will probably need to use another piece of road. 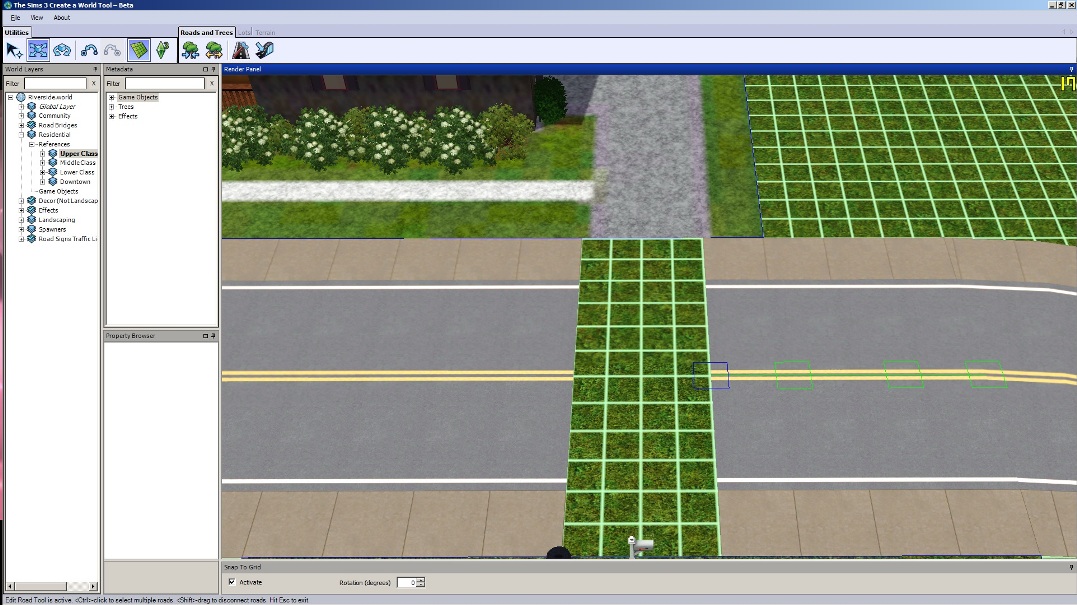 Now you want to connect the gap, using a road that's just like the regular road, except with invisible sidewalks, like so: 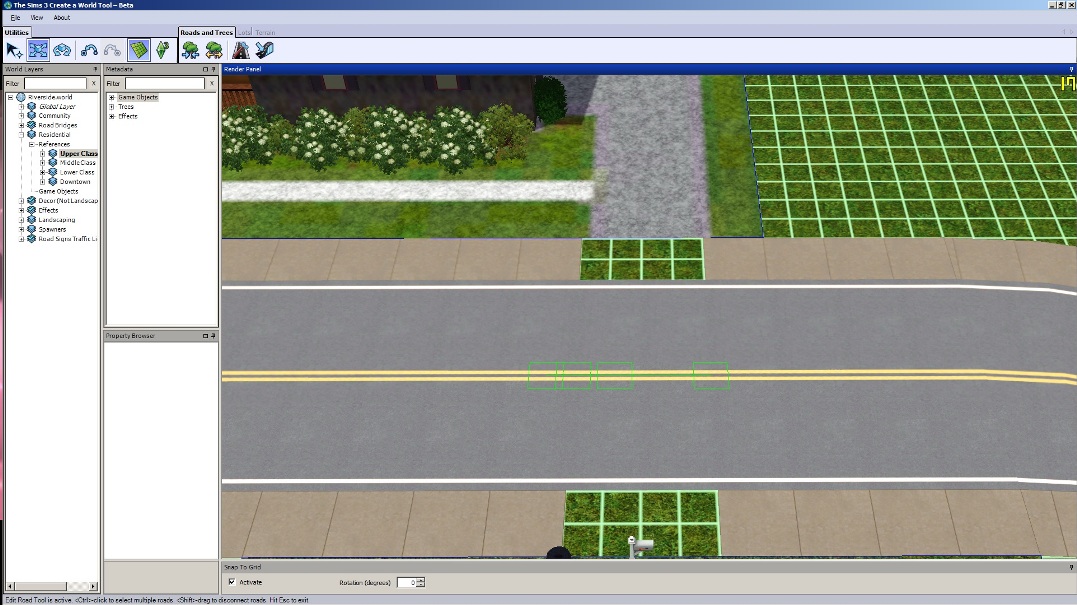 Now you want to use another road, to fill in the space between the "real" road, and the driveway where it starts on the lot. Don't worry about the road being too wide. The sidewalks will cover up the extra width. However, for this short section of road, you will want to use a custom road with invisible sidewalks. Be sure to keep it perpendicular (a right angle) to the main road. 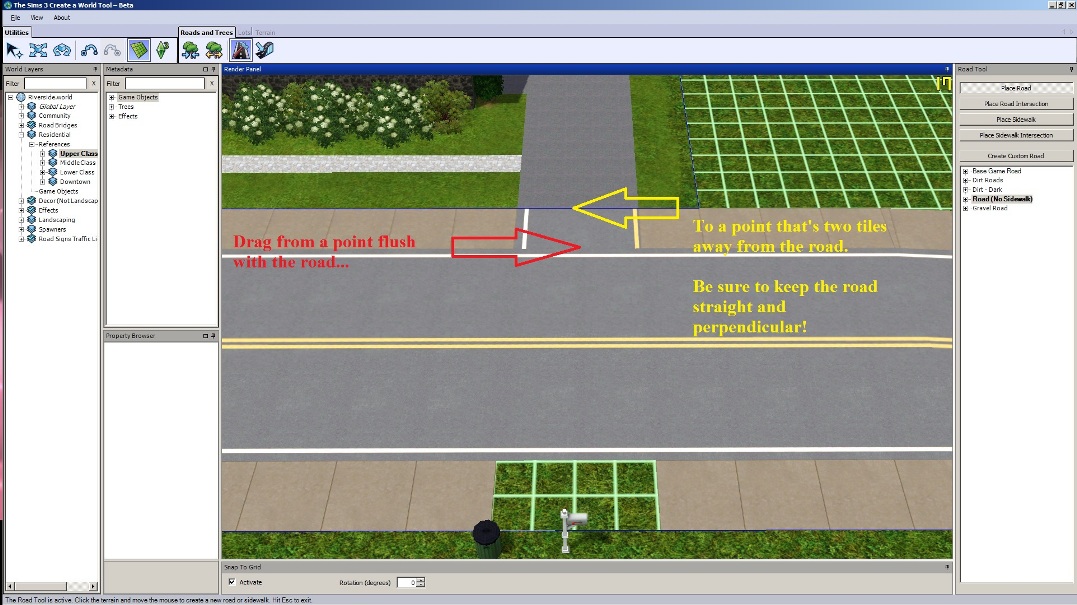 Now you will probably notice a rather ugly looking gap opposite of the driveway. This is easy to fix. Using the same custom road type as the main road (the kind that goes along the side of the lot), just place a sidewalk. Viola! 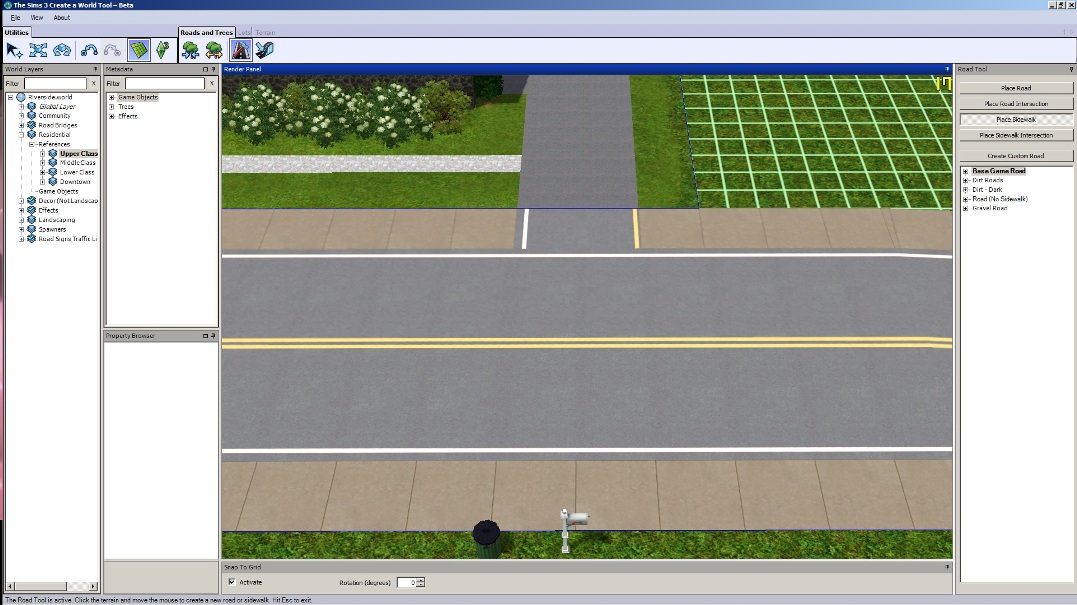 Note that I used the base game road, mainly to help show the overall placement of the road pieces. However, you will want to use more customized road pieces so it will look better. As an example of what I mean, just look at the first couple pictures of this post.

Now on to method B. This method is actually easier, and it even allows for rounded corners. However, it only works on driveways that are 8 tiles wide, the width of two standard garage doors side by side. So, on to the method!

So like step 1 in method A, just choose a place where you want to place the driveway. However, this time you must choose a driveway that's exactly 8 tiles wide.

For the purposes of this tutorial, I chose this house: 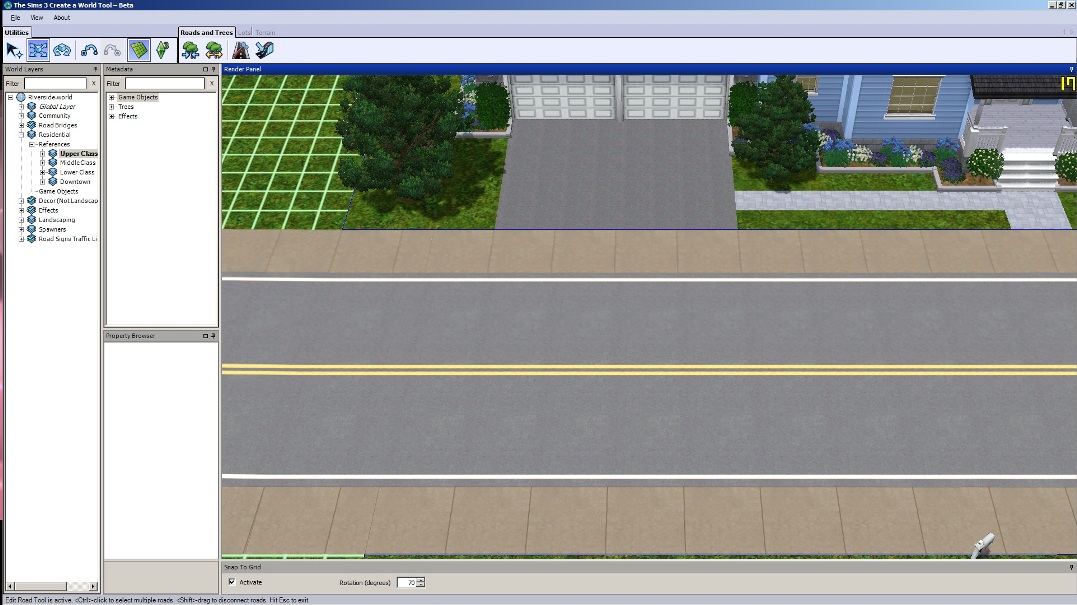 Now you want to create a gap, possibly use another section of road, place an intersection directly in front of the driveway, and attach the road pieces to the intersection, so you get something like this: 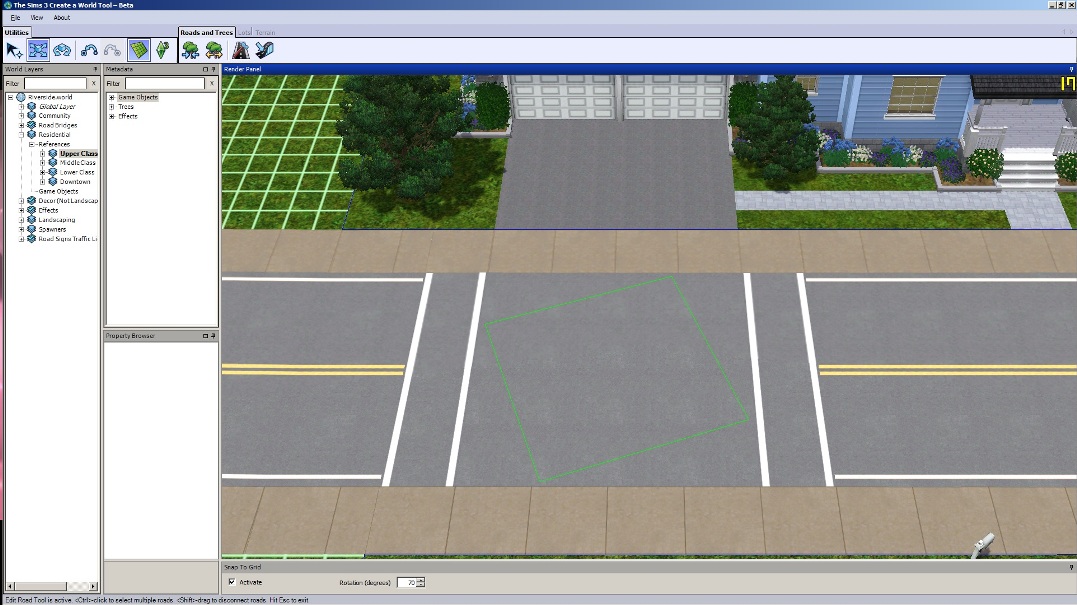 Now you want to use a very small section of road, that's one tile long. You start in the middle of the side of the intersection, one tile away from the road. Then you end it two tiles away from the road. You must do it in this order. If you do it the other way around, the section of road won't connect to the intersection. Also, you want to use a custom road for this very small section, which has invisible sidewalks. 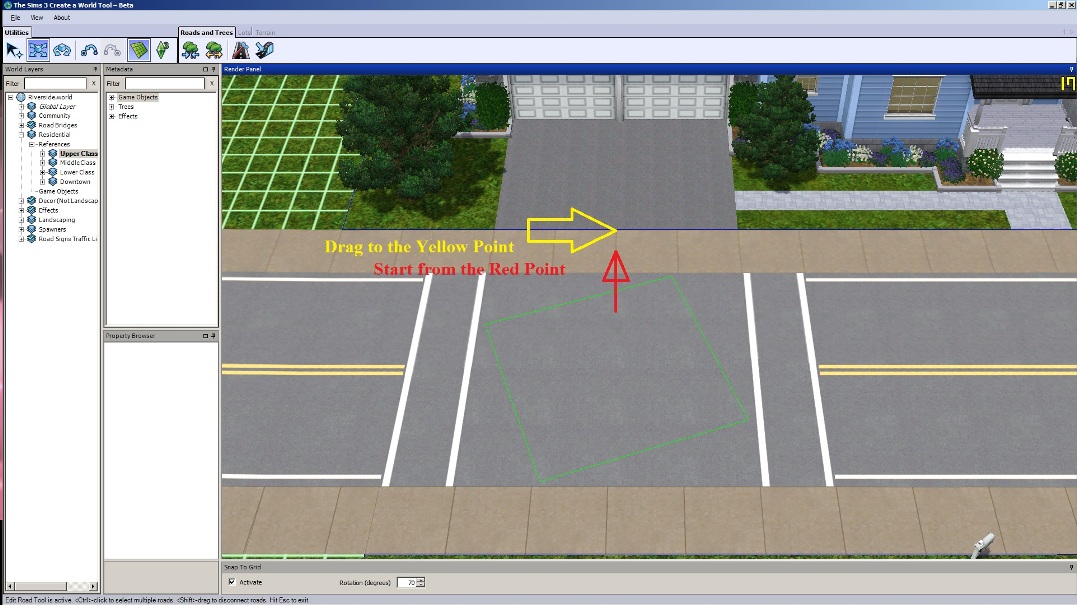 Here's the end result. You may notice that it looks ugly, since I used the base game road, and a lightly modified "no sidewalks" version of it. However, if you use a custom road, it will look much better. Again, just refer to the beginning of this post for the same thing, using custom roads. 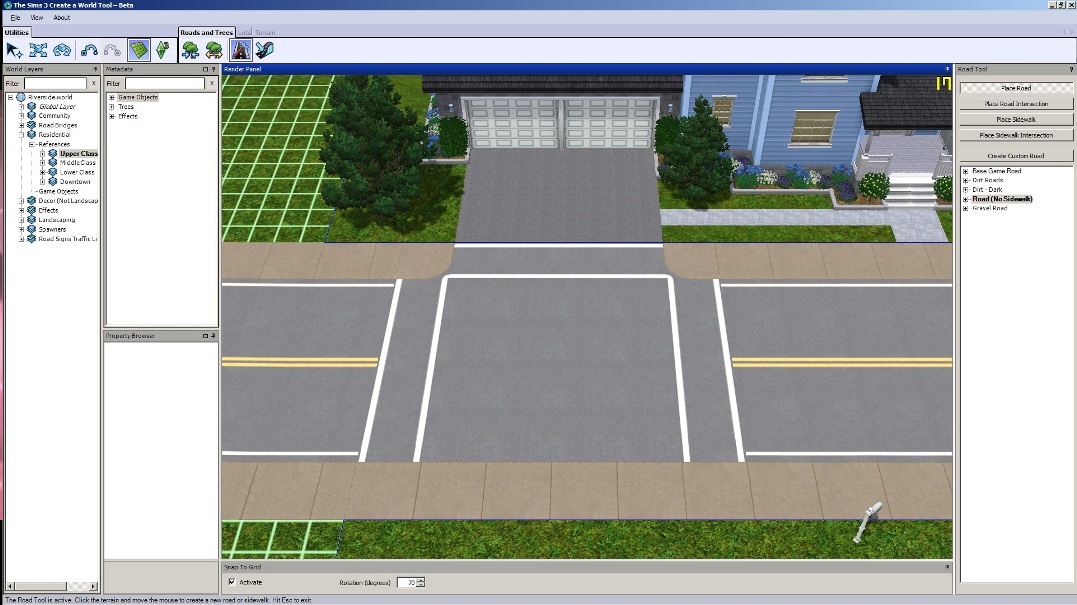 So far, I haven't noticed this method causing any routing problems, despite initial skepticism.

Also, while unrelated, I must thank Ashillion for some textures I used out of the Create A Road Urban Pack and some files I used that were provided by Water_cat1 in the CAW Roads - CaW custom road textures thread.
5 users say thanks for this. (Who?)

This is interesting! Out of curiosity, could you map the routing and take a screenshot? It would make it easier to see what's going on there, and exactly how you placed the little roads. 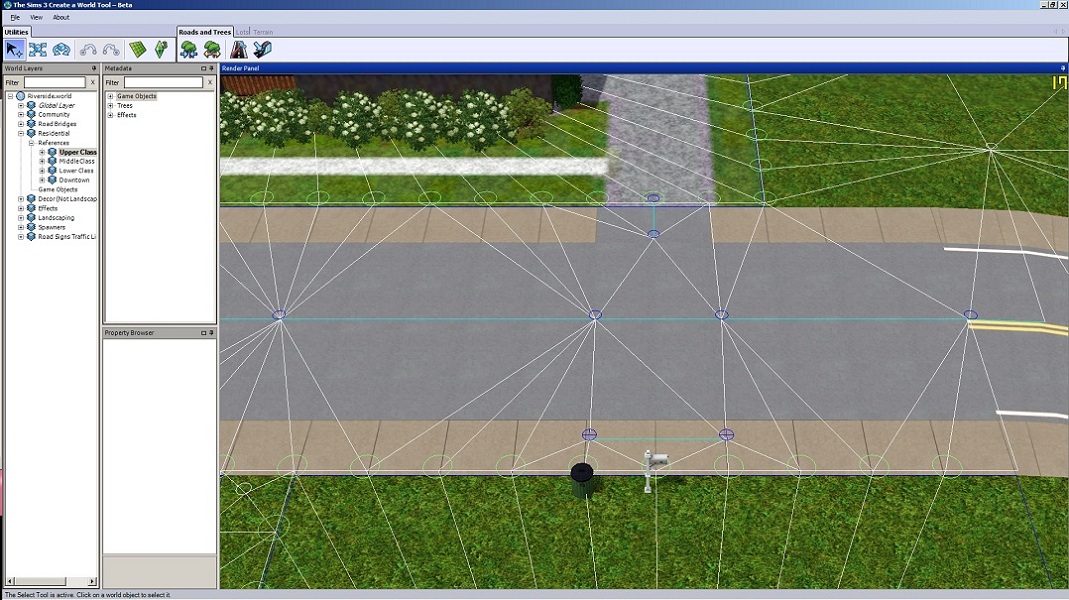 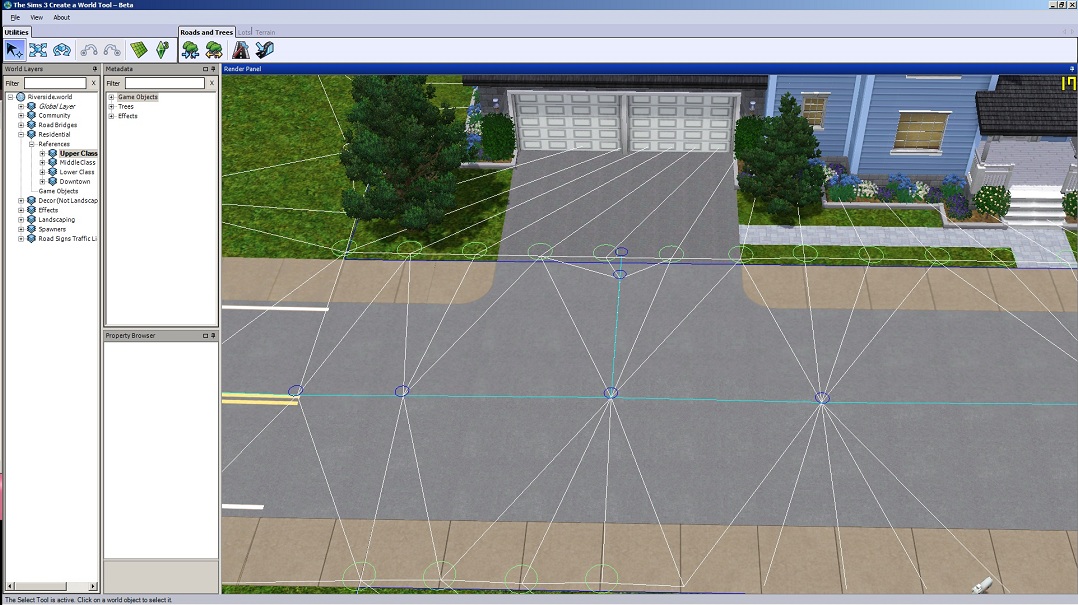 Sorry for my late reply, though it was partly due to the fact that MTS was down for a short while, and personal matters.

Anyway, it's just a matter of choosing the correct textures when you make custom roads. If you need further help, please don't hesitate in asking.
Shanna86

I know it's been a while since anyone posted on this thread but I happened to see it and would like to know if there's more of an explanation available for the invisible sidewalks. I do know how to create custom roads, but I am not sure how to make the sidewalk invisible. Thanks!

**Edit: I kept messing with it. For others who are curious, I made 256x256 square in paint, made it black, and saved it as a .png. Then I used that file for the opacity texture.
Jacen000Solo