Graphics - Resolution Stuck At 800x600 - Windows 7 after all the proper adjustments.

You need to put it in all the EP's, please.
Simthing for everyone

"No Boom Today. Boom Tomorrow. Always Boom Tomorrow" - Ivanova (B5)
Having trouble with the Graphics card and Sims2? Feel free to pm me here, or in this forum at Leefish Sims 2 Graphic Cards
ShayeDK
Test Subject
Original Poster
#27

I'm sorry, I should have done that the first time.
I added both the files to every EP and nothing changed when I went into my game.
I'm attaching the Config-Log from this morning for you to view.
celebkiriedhel

Yeah - it's still not picking up the changed files.
Which means 1 of two things:
1. It's picking up the values from elsewhere. So there may be a problem with the way it's been installed, or there is a folder you've missed.
2. It still has access to the original files, in some way.

We'll start with making sure that we've caught all the graphic rules.
In Windows explorer, do a search on "Graphic rules.sgr" from the root folder (C:\) and make it so you can see the folder that it sits in. and the date it was modified - Take a screen print.
Now. All the dates on them should equal the most recent date that you updated the graphic rules. (i.e. some time in the last few days).
If they aren't - then phew! - we can fix that by updating them.

If they are -
Upload the screen shots here - because I want to check if the folders are missing something.

Also - I hope you aren't running the Graphic Rules Maker - it would be over-writing the graphic rules that I give you.
Simthing for everyone

"No Boom Today. Boom Tomorrow. Always Boom Tomorrow" - Ivanova (B5)
Having trouble with the Graphics card and Sims2? Feel free to pm me here, or in this forum at Leefish Sims 2 Graphic Cards
ShayeDK
Test Subject
Original Poster
#29

Well, I'm a bit confused as to what you want to see but is this it?
If not, please tell me how to find what you do want to see. I use Chrome and not Windows Explorer. 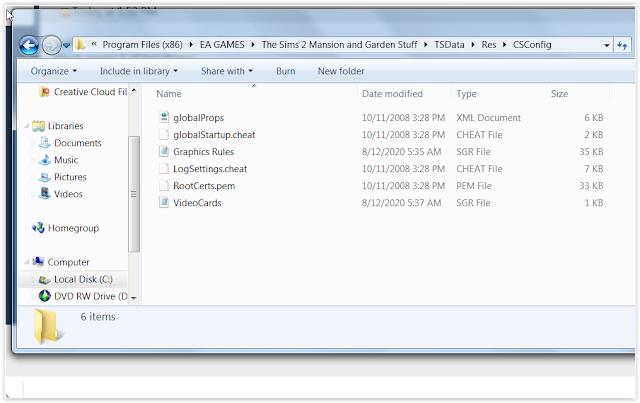 I'm also not sure what you mean about "Running the Graphics Rule Maker???
I don't think I'm running it.
HugeLunatic
Dancing Flamingo
staff: administrator

The folder your image is showing is for bodyshop, what you want is the Config folder.  Did you edit that one as well as the one in the CSConfig folder?
Life Stories | EA Sims 2 Store Items | EA Pre-Order Incentives | Pet Stories | Castaway Stories
Maxis Match | IKEA Extras | Holy Simoly Add-ons | Overrides and Defaults
4esf Archive | Holy Simoly Archive | Sims2Artists | tumblr
---- CEP-Extras List ----﻿
If you enjoy the content on s2a or GoS, consider donating to support hosting costs.
ShayeDK
Test Subject
Original Poster
#31

Yes, I edited both the CSConfig and Config folders in every EP.

Here are the screenshots of every EP that I changed. 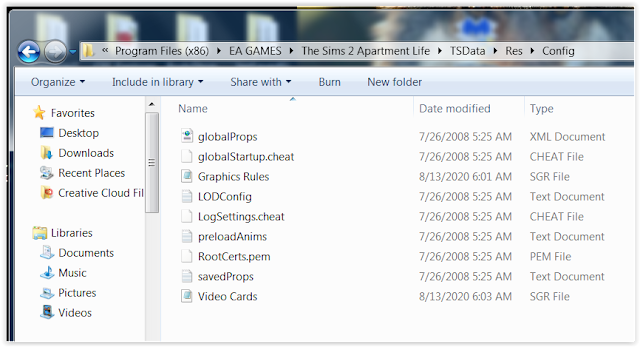 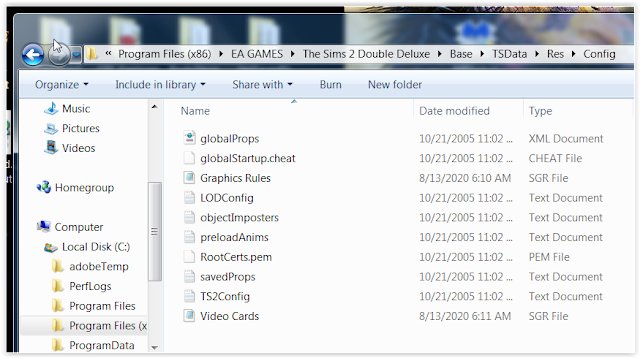 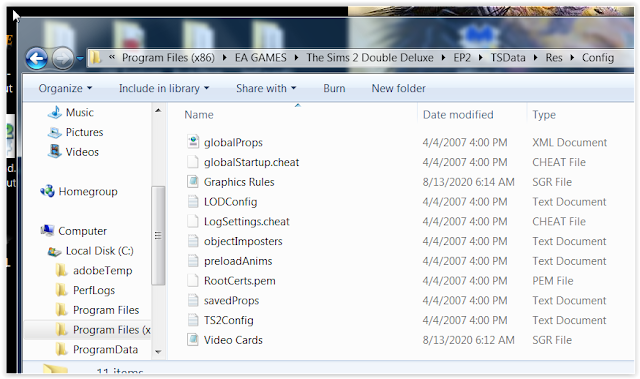 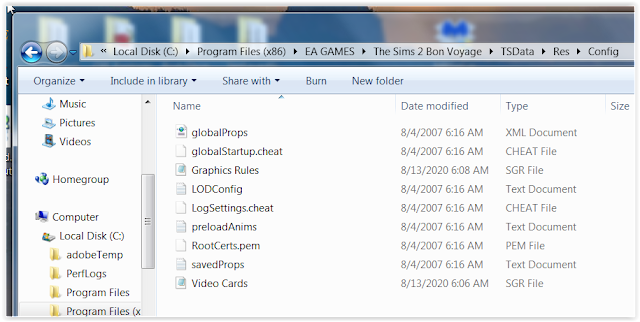 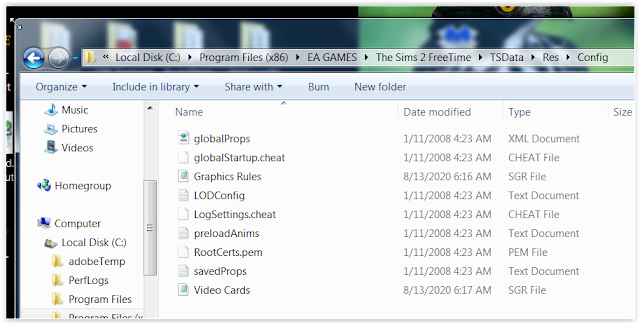 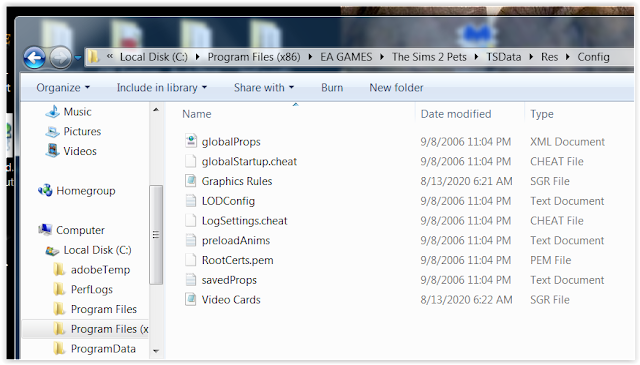 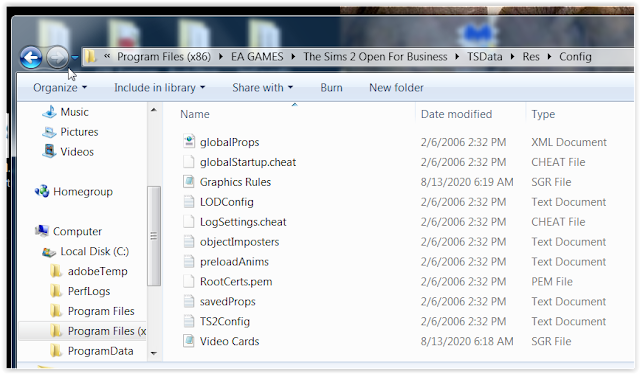 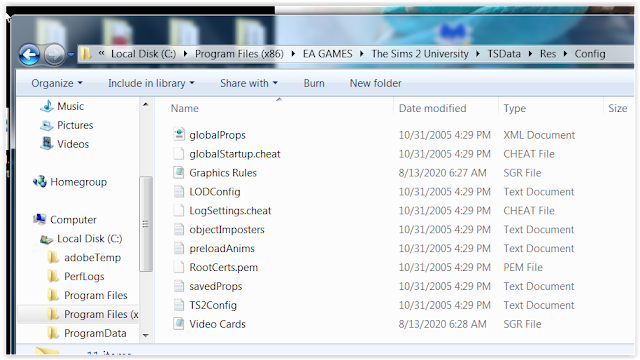 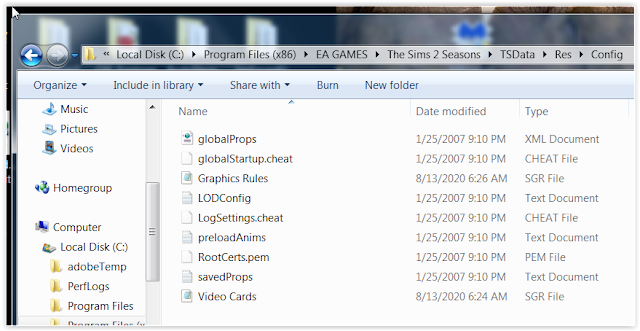 Graphic Rules Maker is a program that you have to run, it doesn't automatically run - so if you haven't ran it, then that's fine.

Sorry that I wasn't clear about the screen shots - I meant the search one. Like this:
Click on link to see image

So what I'm looking at is all the graphic rules.sgr that there are on your drive.

Edit: And looking at mine, it looks like you'll need to update any stuff packs that you have as well - I didn't realise that the stuff packs had graphic rules in it.
Simthing for everyone

"No Boom Today. Boom Tomorrow. Always Boom Tomorrow" - Ivanova (B5)
Having trouble with the Graphics card and Sims2? Feel free to pm me here, or in this forum at Leefish Sims 2 Graphic Cards
ShayeDK
Test Subject
Original Poster
#34

Thank you for clarifying that.
I'm just confused as to where I go to pull up those files.
Can you explain or show me that?
ShayeDK
Test Subject
Original Poster
#35

Are these what you mean? 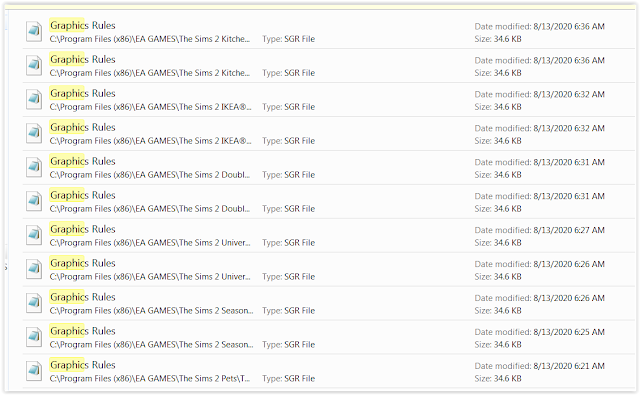 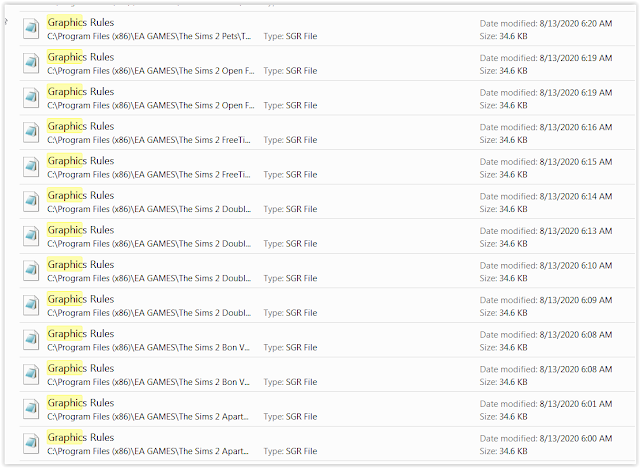 In that search dialog box, right click/Open File Location, for the ones you want to edit.  It will take you to the proper game file.

Editing every .sgr file is not necessary for almost everyone, so I question if this will fix it.  But this led me to another question, is W7 appdata causing an issue?  When I had W7 and non UC, I had to regularly clean this, as TS2 was always storing crap there.
Life Stories | EA Sims 2 Store Items | EA Pre-Order Incentives | Pet Stories | Castaway Stories
Maxis Match | IKEA Extras | Holy Simoly Add-ons | Overrides and Defaults
4esf Archive | Holy Simoly Archive | Sims2Artists | tumblr
---- CEP-Extras List ----﻿
If you enjoy the content on s2a or GoS, consider donating to support hosting costs.
Chris Hatch
Inventor
#37

Quote:
You are confusing Internet Explorer with Windows Explorer, every screen shot you have attached is from Windows Explorer.
As HugeLunatic said Windows User Account Control (UAC) has protected your Mansion & Garden Graphics Rules and placed it into the 'virtual store' and using that one instead of the one in M&G, the path to that is %USERPROFILE%\AppData\Local\VirtualStore (you can copy and paste that straight into Windows Explorer's address bar) and from there the folder hierarchy is the same as C:/ drive.
ShayeDK
Test Subject
Original Poster
#38

I'm so excited - celebkiriedhel and Huge Lunatic, I can't thank you both enough for taking the time to help me out!!!!

I wasn't in windows mode when I went into my game so I took a photo with my phone. 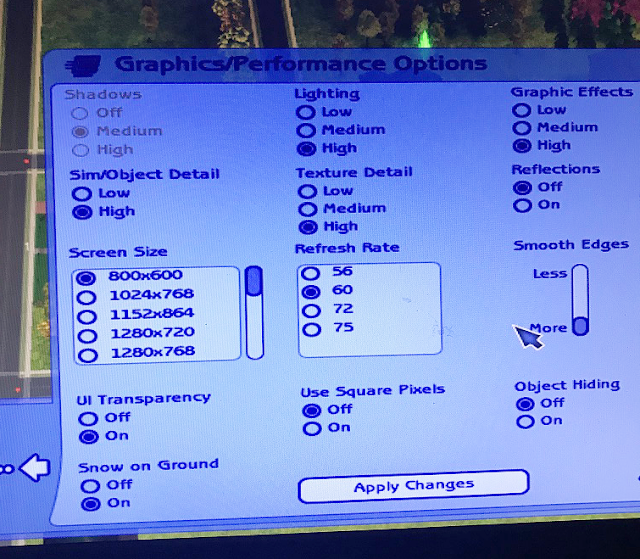 I was hesitant to remove anything from the file - not knowing what to get rid of, but this is what I found.
I changed the graphics and video file to the same as the others and it fixed it!

If you could let me know what I can remove from there I'd really appreciate it.
Plus, do I have my settings right in my game?
My resolution is no longer set at the 800x600. I took the pix before I changed that.
I haven't tried to load Bodyshop yet but will as soon as I post this. Hope it loads for me.

I am just sooooooo VERY grateful for the help!!!
I was beginning to believe I'd never be able to play my Sims again.
I'm so happy! It feels like Christmas!! 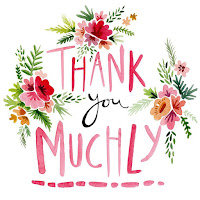 Thanks Christ Hatch, for offering your help and support.
I figured it out after reading Huge Lunatic's post.
I am so relieved that it was able to be fixed!
Happy Day!!

I didn't know about this. Thanks HL!! I will include this in my list of useful things to know.

Edit: I just checked my appdata folder - and it had nothing for sims 2??? Could that be because I've got mine installed in a custom folder?

You can remove the .bak files Shaye. Apart from that now that you've got a working version - you might as well leave it be.
Simthing for everyone

"No Boom Today. Boom Tomorrow. Always Boom Tomorrow" - Ivanova (B5)
Having trouble with the Graphics card and Sims2? Feel free to pm me here, or in this forum at Leefish Sims 2 Graphic Cards
HugeLunatic
Dancing Flamingo
staff: administrator

Thanks for the info - I will!

Just thought I'd mention, Bodyshop still won't load for me.
Not in a huge rush for it as I'm quite content to just have my game back for now!
But do you have any ideas on how to get it to load again for when I need it in the future?
It was working perfectly before all this happened.
celebkiriedhel

There are few reasons why bodyshop doesn't load.

To work it out:

1. Rename your current "The Sims 2" folder that sits in the My Documents structure to some other name. (I tend to call mine "The Sims 2 - Play or something similar).
2. Start up Body shop.
Does it start up? Yes.
Then there is a cache/object/data problem. (this is the easiest thing to fix, and the one to hope for).
If it starts up it will generate a minimal game with just Collection, Downloads, Log and the cigen.package.
I save this version as "The Sims 2 - Body Shop" because it means that bodyshop loads super fast with no other bits and bobs in the load to slow it down.

Did it Start up? No.
There is a program/registration problem. Unfortunately the only way I know how to fix it from this position, is to uninstall and reinstall the games as bodyshop is installed as a part of the sims game installation. Somebody else might know how to fix it without having to do a uninstall/reinstall?

Assuming it did start up - rename the clean version to something else, and return your play game name to "The Sims 2"

Testing for Cache problem:
1. Delete the following files: groups.cache, and cigen.package.
2. Attempt to load bodyshop. Does it load? Yes? Fabulous. When it loads it creates a new groups.cache and cigen package, so the test also creates the fix.
Does it load? No. It wasn't a cache problem.

Testing for data problem in other folders:

2. Move your downloads folder out of game. Load up Bodyshop. Does it load? Yes. Then you've got an object package that's causing problems.
To work out which one it is, start by ignoring all your buy/build object downloads so that you only have bodyshop files. That will make things quicker - they slow the bodyshop load down, but don't tend to be the problem with the program. Move all your bodyshop downloads back into the downloads folder in game.
Then take things out again until bodyshop loads, or you don't have any downloads left in your folder.
Remove the offending packages, and bodyshop will load.

3. If it wasn't the cache, Collections, or a/some files in the downloads folder, then keep going with the testing on each set of folders until you hit the one that lets bodyshop load. The likelihood that it will be one of the 3 previous.

Let me know how you go.
Simthing for everyone

"No Boom Today. Boom Tomorrow. Always Boom Tomorrow" - Ivanova (B5)
Having trouble with the Graphics card and Sims2? Feel free to pm me here, or in this forum at Leefish Sims 2 Graphic Cards
Back to top