Sooo I want to make Cronor a home world with future traits a la this thread: https://modthesims.info/showthread.php?t=643041 But I have a couple questions about how this was done
What it seems I need to do to make a custom future is:

rename the Cronor.world to Oasis Landing.world
open in S3PE import the future world resource
save and replace the original future world file with the new custom one

So if I want a future homeworld like the thread do I still need to swap out the original Oasis Landing with the custom one? The thread mentions editing the future resource file from an 06 to an 02 to mark it as a city but... I'm not sure how to edit the resource? I get to the part where I import it but S3PE won't let me see any details about the resource or edit it at all. How do I edit this future resource file? I feel so silly lol
nitromon

I've never done this before, but from what I just read, the only purpose of renaming it to Oasis Landing is to replace it for future world travel. Since you are using it as a homeworld, you do not need to do this.

Now you can either export this and edit with a hex editor or link your hex editor with S3PE and open it through S3PE.

Woo thanks so much! I’ll try this tonight after I get off work and report my findings

EDIT: Pleased to report it worked like a charm! Super easy and Cronor now has plumbots and futuristic fashion 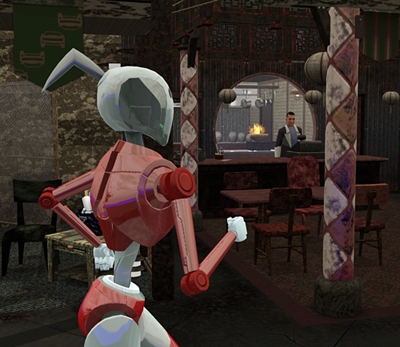 Quick question- is it possible to run a bed-and-breakfast type of resort?

What sort of technical and stylistic limitations might there be?
nitromon

What specific details are you referring to about b&b?

I.e. stuff like running some of the functions by your own sims, instead of hiring others, the necessity of a resort tower for housing sims (wonder if it's possible to make sims not check into the tower but just the rooms), etc.

That's very interesting. It is similar to another concept I tried before which you can merge and mix and match.

The issue with the post's method is that you have actual roommates and need to dismiss them b/c they're kinda permanent. But it works in the sense you collect rent.

I tried a fun "NPC" dorm lot and it actually works exceptionally well in university. I create a lot like a dorm with many bedrooms. But all the bedrooms are in fact NPC doors except for 1. Then every other area on the lot is marked with a public marker. This way, all the NPCs that live on the lot can use all the area except your bedroom.

Now, I haven't really tested it in other worlds extensively, but the few times I did, I remember the NPCs don't really come out unless you call them on the intercom. Otherwise they just leave and go to work and come home. However, the university one, the NPCs do randomly come out and use the whole dorm... and quite a lot of them actually. It was very lively and pretty much everything I wanted it to be. In fact, I liked it so much, I even created a few of the rooms to be real rooms but with public markers so some of them can actually sleep in those rooms instead of going back to the NPC door. You see where this is something you can use in a B&B.

The only thing is, this method... I don't know how to make money.
Sanity is overrated.

Quote:
The gardening spells mod is great for this, I also made sim bots with gardening chips who's job it was to just sit and tend my garden for my alchemy household.
nitromon

Sorry for quoting myself, but I just realized I forgot something about this which answers this question. The reason it worked so well in university has nothing to do with the world. It is just in university, this lot was my only lot with NPC doors, so ALL the NPCs live here.

In a typical world of 100+ service sims, this lot gets at most around 10-15 NPCs using the public area at the same time, that is only around 10%+ that is why it is so lively. In other worlds, such as Bridgeport, where every hi-rise has NPC doors, the NPCs are split up in the world on multiple lots so a single lot would have only maybe 5-10 NPCs living there, that's why I don't see many sims, maybe the occasional 1 NPC that comes out to use the public area.

So for this idea to work and flourish, it has to be the only lot in the world with NPC doors.
Sanity is overrated.

It's been a long time since I sent someone to Boarding School and I'm wondering if it's still borked or is there a fix? Does Cinrict's suggestion still work?
Deshong

I'm curious, because I may upgrade my monitor in the future but not specifically for TS3. However....

I'm going to guess it may be the same according to the typical usage scenarios says "Applications need to be written with more than 8 bpc output, setting a higher value here will not improve the image of the application that does not support more than 8 bpc." I doubt TS3 supports more than 8 bpc, though I could be wrong.

Also according to the typical usage scenarios says "Using higher output color depth can help you display colors with high quality, especially for smooth color transitions and gradients."
Because I'm Fragile...but I'm not "that" fragile.
Simsica

Hi, knowledgeable TS3 Simmers! Being an incredibly stupid TS3 Simmer, I must ask some very basic questions of you. Like: is it possible to force specific dress codes for community lot visitors? Any mods or NRaas settings I'm unaware as of yet?

Thank you!
The best thing about a good thing is that it inspires a better thing. ♥ Receptacle Refugee ♥
cobalt sparrow
Test Subject
#9313

Hmmm, I wonder if either that ticket master thing in the Sims 3 store, or the velvet rope thing from uh, Late Night could implement this? The ticket thing from the store, I think you could use so only X type of sim could enter (gender, age, occult etc I think?) I wonder if you could maybe set it to "formal attire" for example?

I never tried it, but maybe there are videos of people testing it, or someone else knows.

You should try this mod out. It will make sims dress in the dress code of your choice on any lot its placed.
https://modthesims.info/d/477049
Wren-der Simblr // Sim Art // Pictures // Downloads // Random Nonsensical Rambling
Back to top