Quote:
Bah... whoops. I looked all around and never found that. Thanks!

To clarify, what I did was reinstall the game, leave out all my social mods. put in No Sim Loaded and Control This Sim, loaded the lots and saved. It was for uploading to MTS purposes, since I kept getting the error that I had the SDH bug, and after I did all this the site accepted it so... maybe I did something. :shrug:
CASnarl

Not to get off topic of pictures, but how do you know if you have it? I've heard it mentioned so often but I don't really know what it is or if it's something to be worried about.
I may wanna upload a lot at some point in the future, ya never know.
yourfriendmichelle

Quote:
Well... in my case I found out from an MTS upload error.

From what I understand, you get it from uninstalling a social hack that was cloned improperly (I want to say cloned from the SDH social itself but I'm not sure, it has some code to do with it though). It may be hard to know you have it, especially if you have a mod like No Sim Loaded that hides it. I've never seen it, because I have No Sim Loaded, but I'm guessing something along the lines of "DEBUG - Super Duper Hug" pops up in the social menu. It's not known to corrupt your game, just super annoying.

Also, umm, to pull this back on topic to pictures: I'll offer up this screenshot of the time Lilith Pleasant (aka my daughter who I love) raked the leaves, leading me to think she was starting to be responsible and doing chores, only to find out it was just so she could goof around with them. 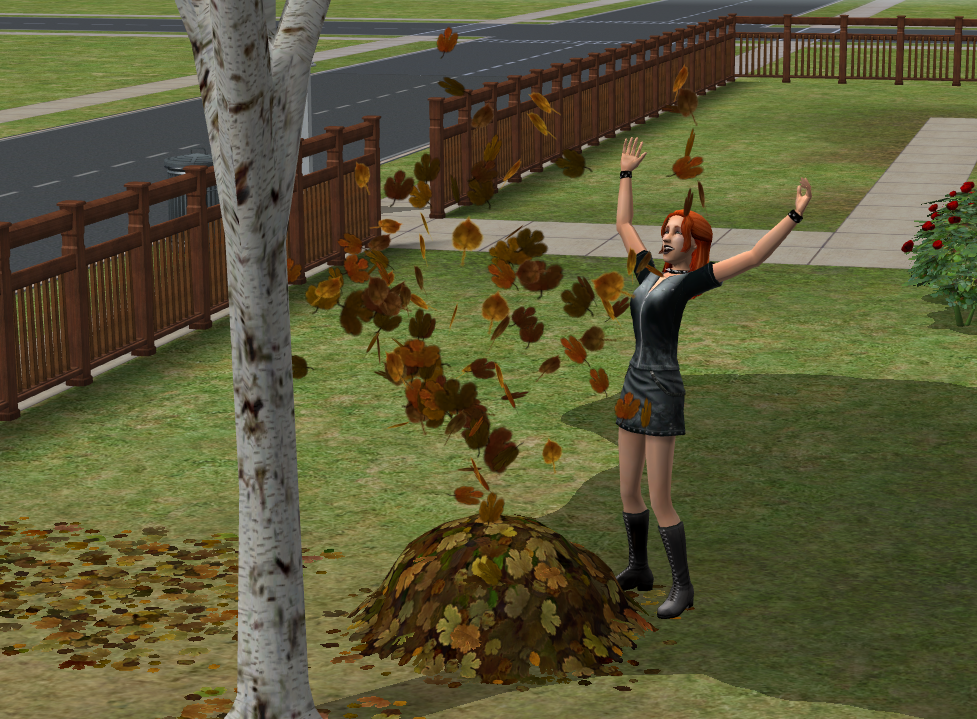 I'm too lazy to crop off the game window so apologies.

Sanjay Ramaswami and Peter Ottomas were doing a school cheer, but the point in which I paused it + the angles that my tab mode were in made for some very funny faces. Or, I think so anyway. 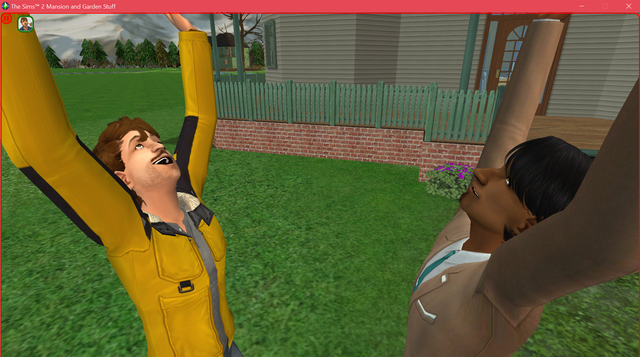 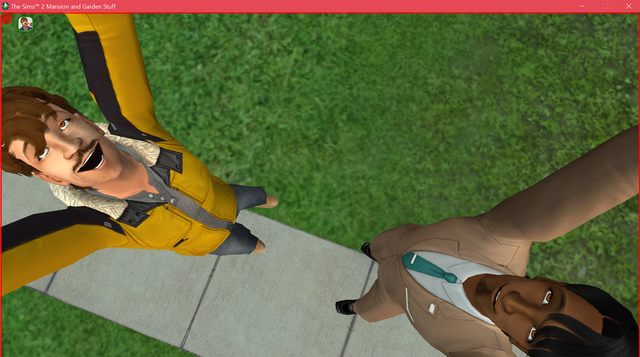 @CASnarl -I wouldn't worry about that if I was you because mine have that window boarder since I play windowed mode.
Here's a big blooper from EA I got when I loaded my new terrain to set up a new town for later sharing.It's a royal mess and I'll have to hold esc down while holding the left mouse button down to get that cleared up.
TadOlson's Blog
CASnarl

@TadOlson so do I but I normally edit my screenshots after to crop that bar off just 'cause I think it looks nicer. But sometimes I just don't feel like it.

I don't usually get a chance and had to not do it because my hard drive would get too full and I don't like deleting things like that so I just leave them unedited to save space.
TadOlson's Blog
RoxEllen1965

I run my game in a window and use Irfanview to take screenshots. It has options to automatically crop out the title bar and window borders. I don't have the latest version, but I don't think the options would be much different in the newer version. 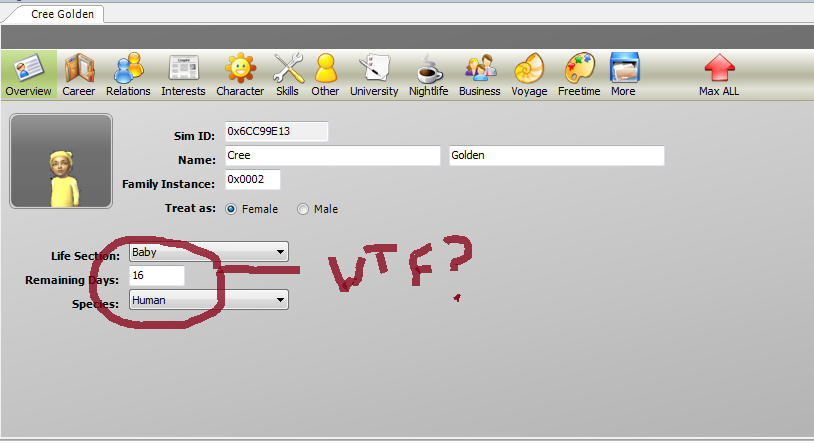 Have you ever walked into a room & forgot why you went in there?
What if God is playing The Sims & he just cancelled your action.
Adopt-a-Sim My Creations My Tumblr
Kligma

Espresso and Sigma Neighbour were joined for lunch not just by their guests but by a hamburger-eating ghost. 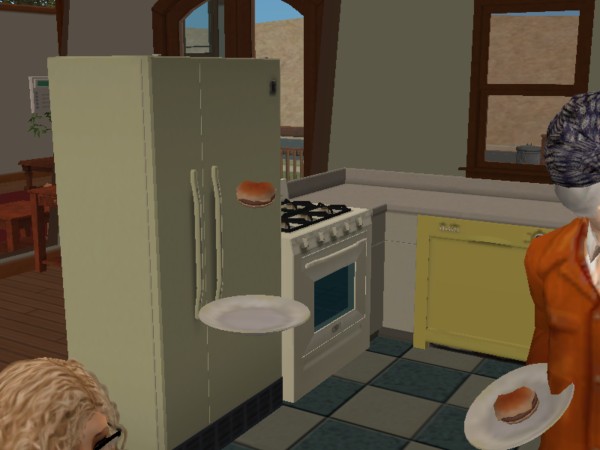 In contrast to the other guests, it was polite enough to put its plate away on the counter after it was finished eating. 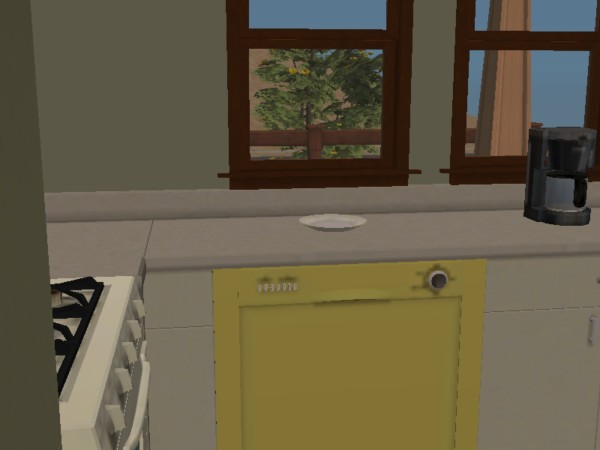 So, apparently fruits/vegetables float in midair if you put plots on foundation... There goes my elevated garden experiment. 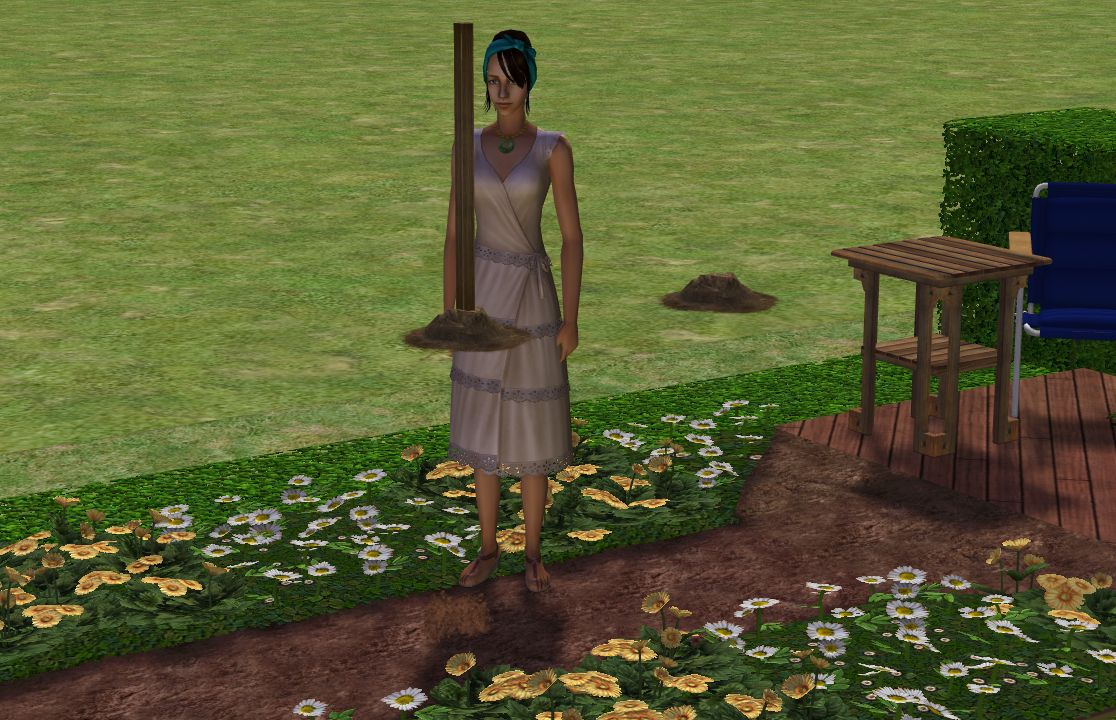 Why not be kind?
SIMposiast
Instructor
#2212

This kind of fixes that problem. (Use the regular garden plot tool at ground level but use buyable garden plots in Misc/Misc for upper levels.) I say "kind of" because a hack that fixes the height values would have been better. But it does work.
Aysarth You can't escape the void, Angela Why not be kind?
grammapat

The bag stuck to her when she tried to deliver a date gift. The gift did not appear. Worse...she had just had a baby, which disappeared before I could name it. I got the baby off the family screen by putting it up for adoption. THEN the baby showed on the teen girl's family tree as HER baby, with the actual mother (the maid who had moved in) as the "other parent"; no one had a memory of the baby birth (including the father).

I just noticed; the same woman (when she was the maid) had a date with the man in the house, and she didn't leave the "gift" then either (she's leaving with the flowers).
Namaste... or "go"
CrystalFlame360

Can you spot what's wrong with this family tree? Nothing unusual here!
When a game is predictable, it's boring.
That goes for any medium that isn't life.
That's why The Sims 2 is my favourite sims game.
It has elements of unpredictability and everything feels more involved.
The Sims 4 is another story altogether...
Freefalldreams
Scholar
#2217 Bayside Flats has trees under its mountains! Pardon my urn default (it's part of a set that is largely a great improvement on TS2 urnstones, although I'm not sure I like the box), but if you've never seen an urn about to be smashed, here's what it looks like: And the reaction from the smasher: I'm starting to suspect this brat has something to do with at least one of the recent deaths...
Please support the Sim National Labs [email protected] team!
Stuff I've made!
Kligma 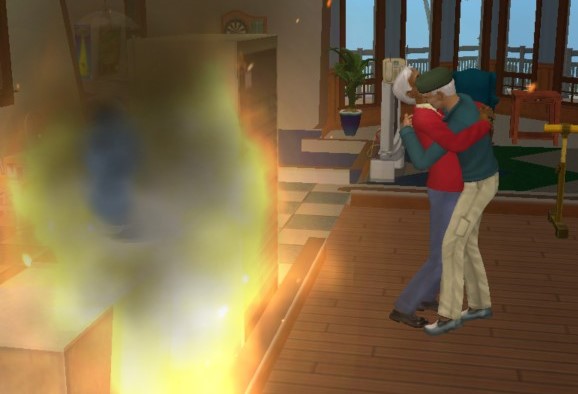 It's getting hot in here.
I am Error.
grammapat

Quote:
Hiding from the law? Wish the new hood I checking out was as "clean". It looks like an old man had an affair with his SON'S WIFE (per their family tree); they even have memories. Result was a boy. Oddly the husband remembers the birth as though it was HIS baby. Oddlier - when the family is first played that baby boy is 3 days younger than the cheating wife! What's that, like 3 years?
Namaste... or "go"
yourfriendmichelle

This happened when I spawned some twins I put up for adoption in a house to remove their family ties. Why not be kind?
Kligma 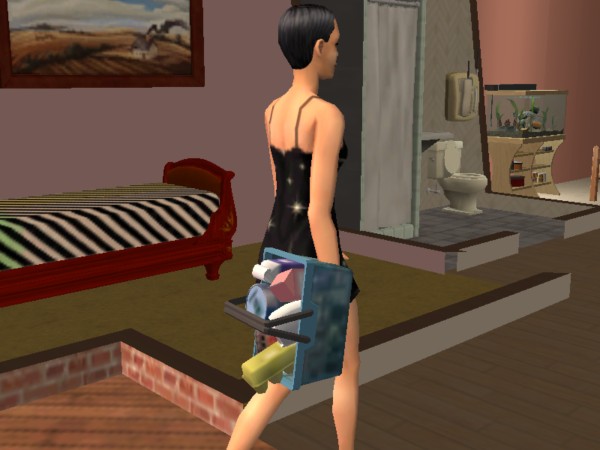 If only there was a more convenient and comfortable way of holding a basket, which didn't put the groceries at risk of falling out of it. 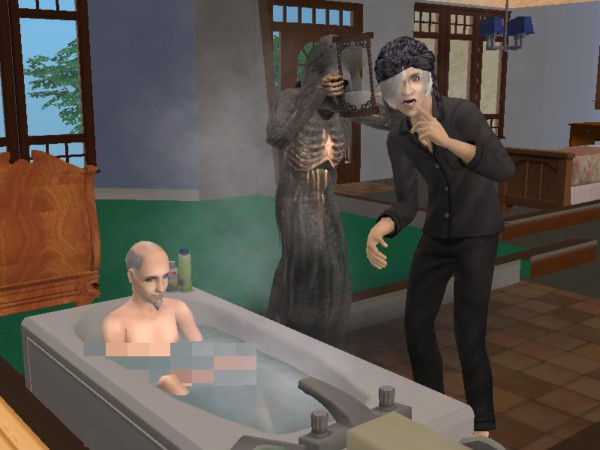 This picture is peak The Sims to me. One guy standing around in an occupied bathroom for no reason, while also in the process of dying (he got better) and reacting in the wrong direction, Grim Reaper behind him doing his own thing and dude in the bathtub seemingly blissfully unaware of everything going on around him.
I am Error.
natbsim75
Field Researcher
#2222

I was playing Lisa Russilo and she got an invitation for an outing so I sent them to the Crypt O' Night Club. Don Baxter was in the group but he was not the active household so, whatever happened there, is not my fault

1. Don decided to try his luck with the ElectroDance Sphere and he seems very determined

And then Sophia Jocque came out of nowhere and beat the Shpere in its own game (photos 4, 5, 6 and 7)

Those Summerdream fairies... so mischievous. I found it funny that at their party, there was a fight... but between the brothers, because of aspiration failure.
Also Bottom is an evil fairy. Not only was she creepy on other lots like a fae trying to kidnap their prey, but she's the only Summerdream ECSTATIC over a fight, the others just whimpered. I love her.
But Puck is also thinking about stirring up some chaos... stupid boy, if you're greedy, you'll make your human friends angry with you!
I'm a young adult in poor health, trying to heal enough to complete my goals.
This is the song that never ends ~ It goes on and on my friends ~
my first ToT Challenge (which is actually indefinitely hiatus, I'm in a different TOT hood now)
CosmicEcho

So I took my sim to the platinum gym for a swim and this happened. 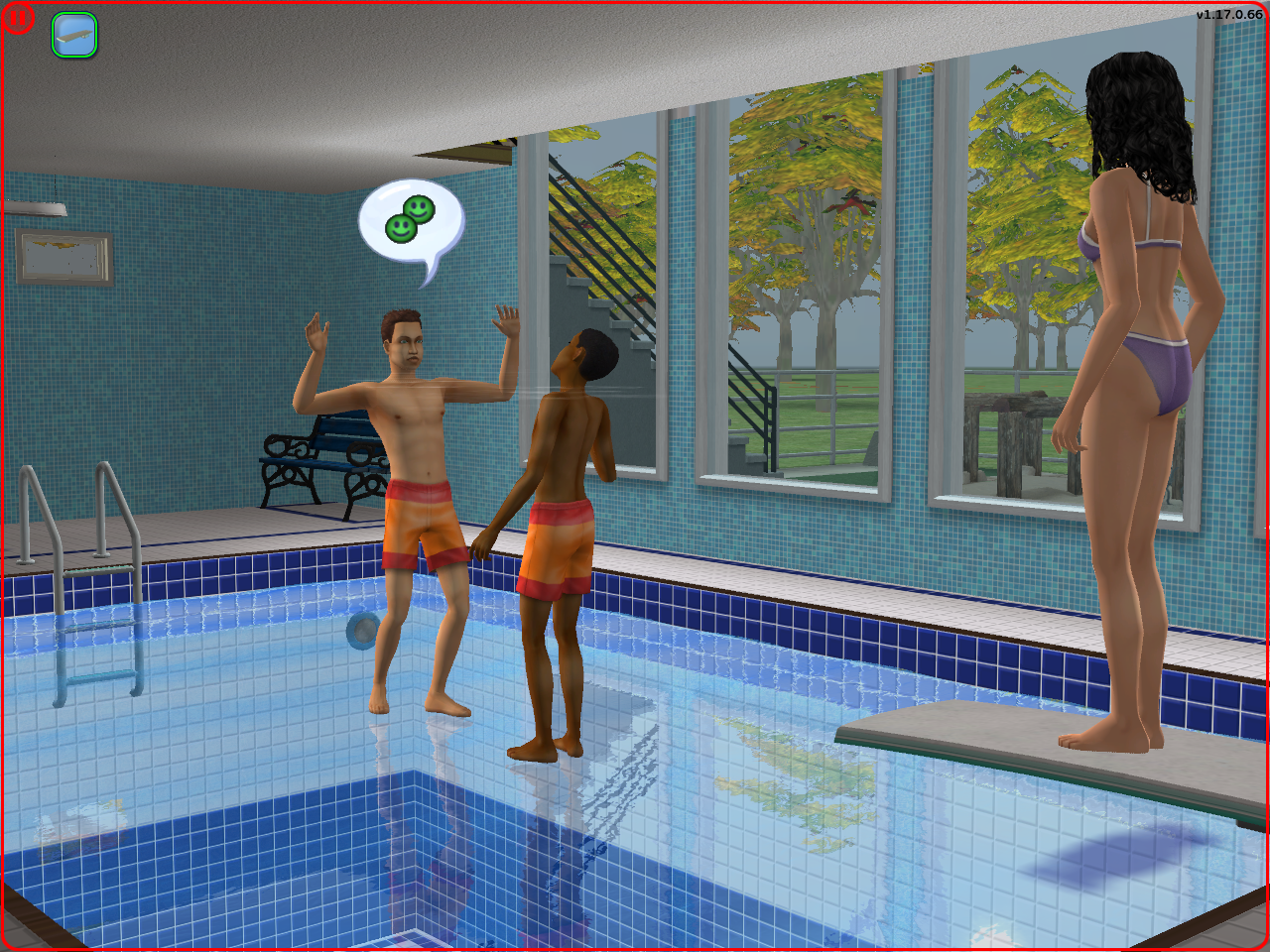 Bella Goth had a burglar last night but officer Ramin Centowski was on top of the situation as per usual in this hood. The alarm woke Bella up and she (for unknown reasons) thought that it was a good time to play her piano during the fight

(screenshots 1 and 2).
When officer Ramin arrested the burglar she run to hide in the bathroom (screenshot 3). I bet she was in denial or the aliens messed her up really bad

Later she recovered and went on a date with freaking Gilbert Jaquet, they woohooed a lot and, of cource, she got pregnant with twins

. She gave birth in her downstairs bathroom, she put the first baby on the floor so she could give birth to the second and then she managed to get trapped between the shower, the first baby and the sink

(screenshot 5, I had to remove the sink to set her free!).
I named the babies Tristan and Trevor, Tristan has blonde hair, Gilbert's skin colour and Bella's eyes, Trevor has Bella's skin and hair but he has Gilbert's eyes!
Back to top