Hi there! You are currently browsing as a guest. Why not create an account? Then you get less ads, can thank creators, post feedback, keep a list of your favourites, and more!
Quick Reply Print version
Search this Thread
Replies: 8005 (Who?), Viewed: 907237 times.
Page 71 of 321
crapsickles

My Sims will sit there and stare at their carpool until it goes away, and they're late for work. >.<

But they'll only do it if they're not wearing their work clothes, so it's avoided like that, but it's so annoying!
Advertisement
Spiritbw

This is the game loading the outfit. If you pause it for like a minute real time, they should change almost immediately because the game will load the outfit while its paused.
Call me Gemma or Gem :)
Played since original 'The Sims'. Spend my life working, playing and lurking around here, posting not enough.
The Only Way Is Up
simblr
kampffenhoff
Forum Resident
#1754

My Sherlock Holmes Sim was on a case and went to a House to dust for fingerprints. I left him while I went to see what John Watson was doing. When I went back I found he had detonated several things in the building and was in the act of stealing the TV.
Spiritbw

That's a new one. Split personality Moriarty/Holmes. Course, that makes his solving the crimes a lot less interesting. It was me all along!
BL00DIEDHELL

I got a few pics.

Apparently, choking yourself while glaring can make the voices in your head go away. 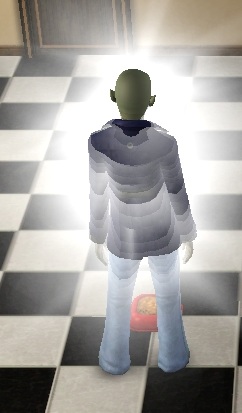 No! Don't go into the light!

Also, I recently got a school for my town and all the teens were excited to go to the town's first prom.
However, things did not go as planned. Halfway through, I got the notification that Devin (the only teen in the household I was playing) noticed that things had suddenly gone dark. 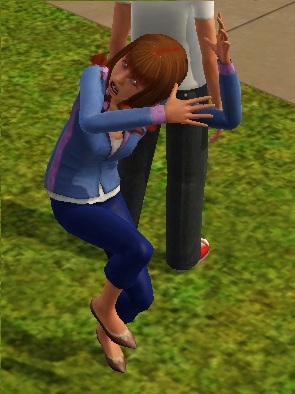 But I did learn that I find the meteorite-related cringing to be hilarious. Especially in packs. 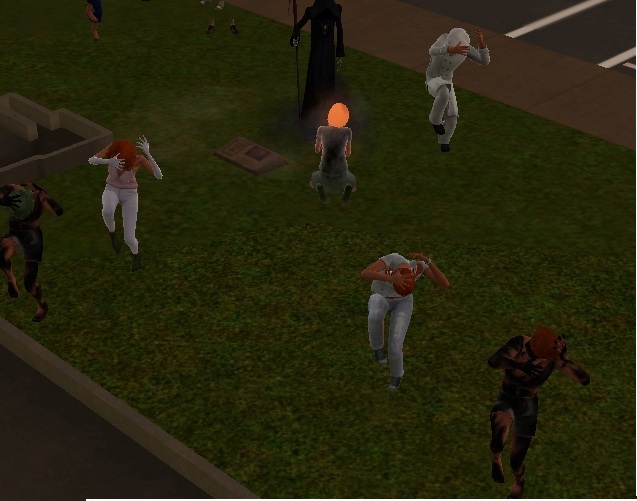 Welcome to the world's first synchronized cringing on one leg competition!
Seriously, they stayed in that motion for hours while the Grim Reaper picked up the teens that died. Fortunately, the family is rich and I welcome the chance for ghosts to join the population. It's mostly just humans, aliens, and imaginary friends right now.

However, Devin did return to the prom after the crash. He had a lot of fun with his date, except for the part where his date turned out to be himself.

That must have been a major feat.
McChoclatey


Well, at least you don't have to worry about him having low self esteem.
My male Sims are...Simulicious!
leo06girl
Inventor

So my Sim's wife went into labor. He goes up to her and gets the usual baby is coming action, and goes into the usual panic. Then I think one of the horses, Leonardo (their four horses are named after the Ninja Turtles), must have gotten jealous of the attention my Sim was giving his laboring wife. Because Leonardo walks directly between them and stops so the guy can't get to his wife. The guy loses the baby is coming action and panic when the horse gets in the middle (literally). The horse coming between them must have made him very happy. Why else would he have gotten the happy face thought bubble? Plus, this guy in CONSTANTLY trying to ride, or just sit on his horses. At least three times a day (sometimes more) he will drop what he is doing to go mount his horse. Only he NEVER puts on proper clothing. He enjoys riding or sitting on horses in his underwear or bathing suit. He does not have the insane trait, but wearing proper attire when riding, sitting on, or racing his horses is a big no-no.

I think this makes the relationship between this guy and his horses go from borderline inappropriate, to down right weird and creepy! I think he might love his horses as much as Aberforth Dumbledore loves his goats, if you know what I mean.....

I couldn't make this stuff up if I tried.
shadedgrey63

I don't know if this exactly belongs here, but this is what happened when, after trying for a badge twice, legitamately, I just used MC's Instant Baby cheat to get 30 grandchildren (and finally got the effing badge). I just picked a random family in Sunset Valley.

Too bad the omgwtfbbq isn't available on TS3, that would have been quite a feast.
Sunnyish

Finally got my game to stop being so crashy, and have actually been able to play for more than half a sim-day at a time now!

So now I have a bunch new stories to tell =)

At the winter festival (it was the last day of winter, hence the lack of snow), this vampire decided that actually skating on the ice skating rink was entirely too human for him, so clearly flat-out sprinting at top speed around and around and around the rink was the way to go. Showoff... But there definitely needs to be a QUALITY PET PARENTING segment, too! My sim dropped by her boyfriend's house to see if he was in, and of course, he wasn't at home. Then I noticed these random little thought bubbles popping up from the snow... He had left his three newborn puppies out on the front lawn, buried under three feet of snow!! And where was he? Swinging on a swing in the park. In the middle of the night. Priorities...

All of the poor puppies started falling asleep out in the snow, so I had my sim pick each of them up and put them on his front porch, so they could at least get inside the house

(I wish I had gotten a screencap of this now, but all I could think at the time was SAVE THE PUPPIES!!)
My MTS Yearbook
“Never put off until tomorrow what you can do the day after tomorrow.” - Mark Twain
Scarysecrets

Went to check on my investigator...good thing I did.

Dusting for micropenis.
Fuck this shit, I'm out.

How do my Sim's horses keep getting in the house? This is the second time that I have been zoomed in on my Sim's wife, then go back to a regular house view and find a horse in the house. This one was stuck, just like the last one, as my Sims have no double doors or any opening a horse can fit through. Only this time, this one's butt was stuck in the fridge. I had to teleport this horse out as well.
Orilon

It's a EA feature that the occults can't roller/ ice skate normally. Witches are the most normal as they actually put on skates and can do basic moves, but can't spin. From what I've read all the other occults don't put on skates and run/ fly/ whatever around the rink instead.
anifromid2
Field Researcher
#1767

I don't play with horses, but could they be coming in the house because they are too hot/cold? Do you have their stall in a building, or just outside? Might be worth a try, putting some walls and a roof around it to see if that would stop them coming inside?
Lady_Chaos

I think the point is that horses aren't actually supposed to be able to get into the house. They can't fit through sim doors, and I don't even know if they can climb stairs.
THE CAT HAIR WIZARD
hugbug993
Top Secret Researcher
#1769 I know just enough Japanese for this to amuse me.
vhanster

For the last few sim days the only zombies that show up are all wearing bathing suits. Zombie pool party?
BL00DIEDHELL

Hmm, it might be on closer inspection. Honestly when I posted it, I was too busy going OH GOOD GOD IT'S GOING TO EAT MY SOUL to look hard enough to notice.
Fuck this shit, I'm out.

Apparently this horse wants to bake something. I wonder if that's why the other horse came into the kitchen, so he could Donatello (this horse) what kind of baking equipment the had to work with. That or he wanted to learn first, then teach the others one by one. I think the horses in my game are becoming more intelligent than their owners. But as anyone, who has read any of my posts in this thread, that is not much of an accomplishment.

But then again.....single horse I have ever had in my game will get the starving moodlet (their hunger meter will be almost solid red) and decide that galloping, peeing, training (on their own), or playing with the ball is a better idea than eating freshly scattered hay. They all also will get the pent up moodlet, with almost solid red exercise, and decide that pawing at the ground or going inside a stall is a much better thing to do than galloping or anything. My horses almost NEVER eat, or fill low needs, on their own; regardless of how high their free will is.
gemly_teddie

This 'horse in the house' thing is getting out of control!

I don't play with pet horses, I don't think it makes sense. How many people do you know who have a horse in their garden when they live in a town?? If you could keep them at community stables, it would be loads better and I might actually use them.

If we had community stables, you could have to visit and tend to them at least every other day or something? I was thinking this would be an optional thing, because if you live in the middle of nowhere in a huge house you probably do have pet horses. Are you listening EA?
Call me Gemma or Gem :)
Played since original 'The Sims'. Spend my life working, playing and lurking around here, posting not enough.
The Only Way Is Up
simblr
BL00DIEDHELL

7characters
Fuck this shit, I'm out.