Hi there! You are currently browsing as a guest. Why not create an account? Then you get less ads, can thank creators, post feedback, keep a list of your favourites, and more!
Quick Reply Print version
Search this Thread
Replies: 8005 (Who?), Viewed: 907310 times.
Page 72 of 321
IzzyBess

Some day a zombie vistited my garden.

I don't even know how to comment it. Sorry that the pic is so dark.
Advertisement
ChronoJohn
Top Secret Researcher
#1777

It's been a while, so here's another Scumthorpe post. Apparently, some of them can't even sleep without being ridiculous and creepy:

Do Scumthorpes Dream of Eclectic Shit?

A while back, I was controlling the Scumthorpe triplets and sent them all to bed late in the evening after a long day of playing videogames, being yelled at by Larry for no reason and (in Carrie's case) chatting to an imaginary man who lives in her brain and subsequently getting beaten up by Sprog for the millionth time that week. Having never tried it before, I used the dream interaction from Generations to see what would happen.

The results were... not encouraging, and most likely something that a child psychologist would want to look into in any sane, rational setting. Hell, these three put together could probably provide enough material for an entire conference on dysfunctional children by themselves.

Carrie's mind is... a confusing, frightening place, to say the least.

And meanwhile, Lolita seems to have recurring nightmares about Sprog.

But at least neither of them have remotely similar dreams to poor Lester, who rapidly seems to be becoming the most morbid and nihilistic 6-year-old in the entirety of SimNation due to the constant frustration of being a shrivelled, frail little Tiberium mutant with barely-functional limbs, radioactive blood and in all likelihood a drastically shortened lifespan.

I mean, look at this stuff:

IN THE END, WE ALL BURN

WE ARE ALL BURIED

AND THEN WE ROT AND FADE FROM MEMORY

SUCH IS THE FATE OF ALL MANKIND

Godammit, Lester, why must you be such a creepy little bastard-

-Oh, I see, because there's a Lovecraftian horror lurking under your bed.

In other news, though, an update on Crypto the alien baby: He's now sitting up and crawling:

And generally being the most adorable thing ever to come out of a man's rectum.

And getting on brilliantly with his elementary-school-age half-aunt. Not the most normal family relationship one could have, but still...

So the only way to maybe have something decent with the Scumthropes is to pull it out of one of their butts?
Lady_Chaos

Well, way to ruin the moment

You know, Lester could become the next Edgar Allen Poe...
The Overlord Legacy - Taking over the world one generation at a time.
The Addison House - The reality show where eight contestants are crammed in one haunted house to survive.
koololdster
Field Researcher
#1781

I admit that I am a computer dummy and don't know how to upload pics to this site, but I do have a picture (under memories) that shows the Grim Reaper cleaning the kitty litter box after taking the latest soul to their great reward. I just found that totally bizarre! I didn't realize that Grimmy was such a neat freak!
misslaheela

You can get an account on photobucket (www.photobucket.com), upload it there, and then copy the IMG link and they will show up here. That's how I do it, and it's free.

The Overlord Legacy - Taking over the world one generation at a time.
The Addison House - The reality show where eight contestants are crammed in one haunted house to survive.
BL00DIEDHELL

This is an old picture that I FINALLY managed to get off my Goddamn laptop.

That is Erika Wolff, holding baby Gator. Apparently she doesn't think anything of cooking herself and her son.

...Man, that would sure as shit change the Overlord legacy, wouldn't it? :P
Fuck this shit, I'm out.

Why, who knows what horrors would produce Generation Four without him!
The Overlord Legacy - Taking over the world one generation at a time.
The Addison House - The reality show where eight contestants are crammed in one haunted house to survive.
Aree

Oh god, this reminds me of an amazing OMG WTF moment I had a month ago. Probably the pinacle of my simming experiences. Grim does NOT like the rain. I don't remember if I posted that here at the time, though I imagine images alone would not capture the glee I felt watching grim pull a rainbow umbrella then start running in literal circles through the neighborhood before running into the ocean and vanishing.

EA makes a lot of mistakes. I couldn't be more thankful for that one though.
Lady_Chaos

The first thing I thought of after reading that was "I must go, my planet needs me."
THE CAT HAIR WIZARD
BL00DIEDHELL

This is another old one that took a while to get from the laptop:

...She was fully dressed again when she loaded properly, but uh. Still.

This next one on the other hand...

Zack what the fuck are you doing those are not your work clothes! I don't even have any nude mods!

Well, you do now.

Hi everyone, love this thread and mostly lurk here to follow the carry ons of the marvellous Scumthorpes but thought I would share this one (my first post) under the "quality parenting" theme.. my sim put her twins to bed then decided to do this in their bedroom with no intervention from me I was very "OMG Wtf are you DOING!!"

Bloodiedhell: I think your sims need to clean their bathroom as well as their act...

Dem4ge: happy first post! And omg lol!! I'd understand if it was any other instrument as it could be a soothing lullaby she's playing, but I've never heard a lullaby on the drums

Call me Gemma or Gem :)
Played since original 'The Sims'. Spend my life working, playing and lurking around here, posting not enough.
The Only Way Is Up
simblr
hugbug993
Top Secret Researcher
#1792

Yeah, I'd say that the horse-in-the-house thing is becoming an epidemic. Can't be worse than a horse in the mirror, though. 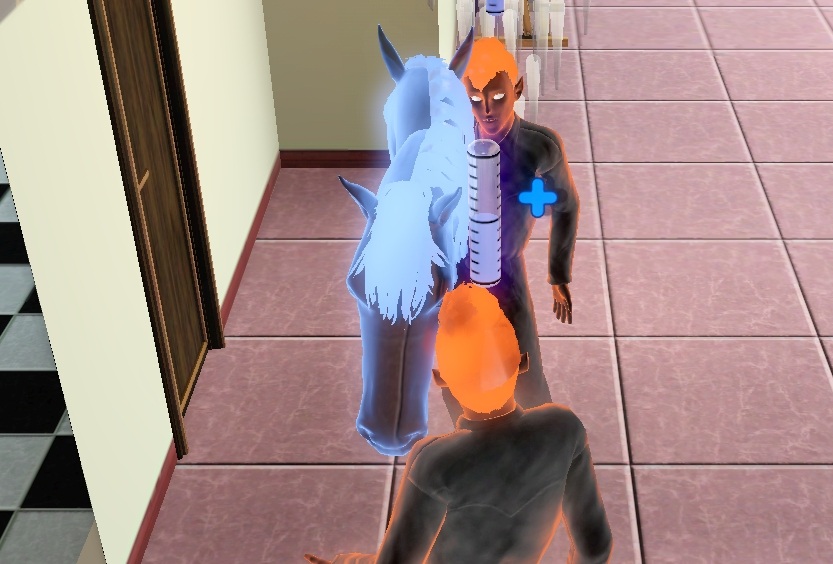 He doesn't seem too bothered. Then again, he has that hair. That probably immunized him to frightening things in the mirror.
Orilon

That reminds me of an WTF moment I had awhile ago. When Cornelia Goth became an elder she had a proper top, but nude bottom, and I was confused as to how it happened since I don't have any mods that lets Sims be nude.
r_deNoube

Quote:
Well you and BloodiedHell do now. Keep your eyes open for the bareback-indoor-horse-riding mod, it's surely next.
Ronnie de Noube - Comic and Blog; Twallan Sunset Valley National Laboratory
BL00DIEDHELL

I know LOL, I'm terrible at keeping the house clean for my Sims without someone with the neat trait and/or a maid. The first one was in my asylum challenge so I could only direct one Sim.

Gotta let herself air things out I guess.

So, yesterday my infant toddlers were having a bday. Yeah. and the daycare room caught on fire, cause I was using that room as a toddler bedroom. I'm like, WHAT IS WITH YOU SIMS. and i was telling my sims to get the *censored* out of there. I first told the father to leave. He wouldn't even budge. AND HE WAS HOLDING LITTLE GRACIE (who already grew to toddler) and her twin, still-an-infant Georgie was just lying there... and the mother is RIGHT NEXT TO THE FIRE, WITH ME TELLING HER TO CALL THE FIRE DEPARTMENT, WHO JUST DECIDES TO RATHER FREAK OUT. Finally she called the firemen. it turned out to be a fireWOMAN, and the father FELL IN LOVE WITH THE FIREWOMAN. Im like, FML.
imkrazy1000
Lab Assistant
#1797

"This year, I'm going to have an underwater-themed party!" Yeah I think I'll pass on that one
StardustX

Isn't she a bit young to be giving birth in a toilet?
/bad joke Oh, and this is fun.
My sim Angelina (who just happens to be the blonde in that picture up there) married Demetrius. They had a child, Ginny. Angelina cheated, the split up. Demetrius ended up marrying Angelina's niece Serenea (they have a child together now too).
Now Demetrius is Angelina's ex-husband AND uncle. Ginny is now a teenager who is pregnant. So now they have some kind of weird mutant freak grandchild on the way too.
...Yeah.
Back to top