No, I am not. But we are discussing an alternative to the Sims games here and not just any life simulation game, correct?

Because there is no competent alternative to the Sims games, customers turn to EA for their sim-related needs with the hope that either a modder will fix what's broken or that EA will eventually give customers what they have been asking for.
kennyinbmore

Which is why there's no alternative. If I'm a developer, why would I sink millions(or whatever it costs to develop a game) into a competing game when EA's customers have that mentality.
Original_Sim
Alchemist
#78

To show EA's customers what they're missing? Wouldn't you rather have a decent game with minimal bugs out of the box instead of a game that needs to be modded to work right?
kennyinbmore

That's called a gamble. Not a good thing in business
Original_Sim
Alchemist
#80

You can't expect to run a business without risk. Releasing the Sims 4 would be a gamble, too. You can't be 100% certain that it's going to succeed.
enterprise24
Lab Assistant
#81

Agree. If I can play sims for 1hour and no BSOD then my OC is stable

Sims is very very heavily CPU intensive.
Here is my CPU utilization 2500K @ 5.0Ghz
It use lot of process power because I play in ultra speed.
When I saw graph I hesitate this is Crysis3 or The Sims 3

Yes, You're absolutely right. Taking and managing risk is the very essence of business survival and growth.
kennyinbmore

Sure you can. There are simmers who would buy TS4 even if the reviews were horrible. Again how many times have you seen a post here that said "this expansion doesn't appeal to me, but I'll buy it anyway." There are people right now on this forum who have already stated they're going to buy it and we literally know nothing about it yet.
Original_Sim
Alchemist
#84

If the reviews were horrible, I doubt it'd be considered a success. People bought the new SimCity but I don't think EA considers that a success.


Quote:
Again, because of the lack of a decent alternative. Simmers who settle on EPs they never wanted also rely on mods and/or hope that EA will eventually give them what they want. Some buy EPs just to stay up-to-date with their custom content (e.g. Awesomemod) because there are cases where if you don't have the latest EP, you won't be able to use certain mods. Some simmers buy EPs for items and features that they can't get anywhere else even though they may not be satisfied with the expansion itself.

If they can get what they want from another company without having to mod their game or wait for an expansion pack to come out, I don't think they'll keep buying unwanted expansions from EA.

By the way, not all of us succumb to EA's marketing tactics. If an expansion pack doesn't appeal to me, I'll hold on to my wallet.
kennyinbmore

I feel like a broken record. Why do you think no other company has made a serious effort to cut into the life simulator genre market since 2000? Seems to me if you have a company doing a lousy job at it, it would be prime opportunity for another company to step in. No company has.
Original_Sim
Alchemist
#86

When I was talking about an alternative to the Sims games I was not referring to just any game that can be considered a life simulation, which is far too broad. There are other games in the life simulation genre, but they are limited in ways that the Sims games are not. Many of the ones that exist were not made to compete with the Sims. They were made for entirely different reasons with different goals (e.g. farming, romance, work, etc).

The Sims is like a melting pot for different aspects of life. It has "ingredients" that can be found in other games whereas other games have only two or three of these ingredients. Some may even base their premise on just one ingredient, like romance. The Singles game is heavily focused on romance but does not include pregnancy, children and life stages.


Quote:
At the moment, yes. This could change in the future.
heat33330
Field Researcher
#87

Check out La Vida for a life-sim that is going to directly compete with The Sims.
gazania

I wish 'em luck, especially in the shadow of Sims 4. Maybe this company might shake EA out of its complacency. They are going to have a tough road to travel, though. And if they do anything even vaguely Sims-ish, EA is not going to be amused and will show its displeasure quite openly.

(The game has a bit of a Sims 1-ish feel to me. It might be my imagination.)
Thanks to ALL free-site creators, admins and mods.

I would definitely love to choose another game over The Sims franchise, but it would have to have all of the things I want that EA isn't giving me - things like advanced character creation and realistic graphics, more romantic adult gameplay, and a much better build mode. Sadly, La Vida doesn't look like it will have any of those things.
amor vincit omnia
heat33330
Field Researcher
#90

I thought it had that TS1 feel too, especially the console version. I'll probably stick to TS2 and heavily modded TS3 but it does look interesting nonetheless.
MrDensilter

Quote:
actually My PC is 5 years Old since I bought it in 2008 I stil can handle some HD games less lag

We know nothing about TS4
lil bag2 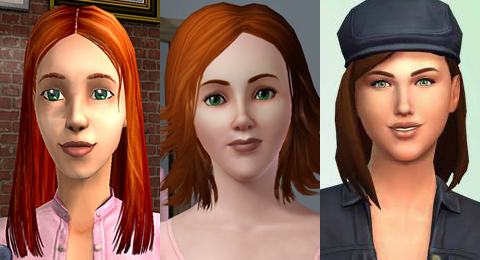 Sorry, but how is TS3 graphics better then TS4 graphics? In my opinion Sims 4 graphics are definitely better then the bobble-heads we have now. TS3 isn't realistic, unless people think taking a car out of your ass and teleporting inside is lifelike then I guess they're right. Never thought the sims in 3 were realistic, never will. I guess to each his own. I'm ready for you disagree wagon.
❤"Don't cry because its over, smile because it happened"❤"It's okay for you to disagree with me I can't force you to be right"❤"I don't care what anybody says, sleep is my BFF"❤
fraroc
Instructor

I'm gonna agree with this, I definitley think that the Sims 4 face looks a lot more shapely and glamorous than the Sims 3 one, then again the one in the middle is a Sims 3 default "pudding" face, which looks not good until extensive work is done in CAS.
DigitalSympathies

I don't think that we should focus on graphics per se but on texture detailing. TS2 had little details on all of its objects like scratches, stickers, warning labels, bar codes, etc that you don't see in TS3 very often. Everything in TS3 has a really low texture detail (lower than TS2, as evidenced by some conversions) as well as less details such as curves on leaves of potted plants (TS3's are very boxy which could've been avoided). Sure, there's HQMod, but it doesn't run well for everybody. I just hope that TS4 has HD textures like it should - TS2 came pretty damn close with how detailed some of the CC could get. I still like zooming in on things and being able to read small print on objects in TS2. On TS3 it's just blur, blur, blur without mods.

The graphics on ts4 wont be that good, but they did announce on twitter they already started making sims 5 so it may look like gta5

They haven't even made a life stage besides adult for Sims 4, why would they start The Sims 5? I don't want Gta V graphics, I want a good game. The Sims has always been cartoony so I don't get why people want it to be realistic and multiplayer all the time. What a way to ruin the series

❤"Don't cry because its over, smile because it happened"❤"It's okay for you to disagree with me I can't force you to be right"❤"I don't care what anybody says, sleep is my BFF"❤
litlegothcat13

Personally, I agree with EA that the sims should be stylized, and I agree with them that's how the sims in 4 look like. You might disagree, but if I think if one takes out the bright colour palette they've chosen, the sims look like a good compromise between realism and style. Other than the hair, but when has EA hair not sucked ? (well, I did like how they were animated in 2 though)

I completely and utterly disagree with those that want ultra realistic sims, not only because it'd be a system killer for a lot of simmers, but because it's not the style I even remotely want. And just like I like glamorous hairs that most people dislike in favour of more practical styles, but I don't go out of my way to put down EA for not going with my personal taste, neither is it fair for ultra realism fans to do it. I hated the look of the Sims 3, but I always respected those that did like it and didn't whine at EA about it, even though that utterly killed my enjoyment of the game. I've only been bringing it up recently because haters of TS4 look are making such a huge fuss and want EA to change it because otherwise they won't play the game, but when Sims 2 players say they couldn't switch to 3 because they can't stand the graphics, they mostly are dismissed as old schoolers that hate everything that isn't TS2. How is that fair?

While I completely agree that everyone can complain about gameplay, complaining to EA about graphics because it's not your style sounds petty. Unless it's because everything is blocky and blurry, your personal tastes shouldn't be the developers main priority, because a lot of gamers will disagree and they have just as much right to have their tastes prioritized as you do. This is something that should be left for CC for each user to tweak to their own liking.

What I do want, is a good game like Cece said. Because even when I put aside my hate for everything graphics related to TS3, I still got stuck with a coding joke for a game, that not only fails in basic things like a FPS limiter, but it's riddled with glitches (I swear the thing invented something new each time I played) and didn't let me play as I wanted (rotational play is impossible without mods, not being able to make new hoods without the pain that was CAW, too much focus on the adult stage, etc). That's not something mods can fix, and by god, TS3 modders tried so hard to do it.
morphius1

Amen! Same here!
Back to top