Making coastal elevation changes stick when moving/packaging BV beach lots
This is a work in progress.

By default, editing the beach of a beach lot is very limited; only a handful of objects are allowed to be placed there, and terrain morphing and other modifications are out of question.

It is possible to bypass those restrictions, one way or another: to place objects, use moveObjects on code; to morph the beach terrain, use the boolProp constrainFloorElevation false code; to build foundation and rooms on the beach area, refer to this tutorial.

However, the last two of the above make a huge nuisance; the coves and other terrain shapes only stick if the lot is never moved. This means that moving a lot across the same neighborhood, binning the lot, or packaging it for sharing, reverts all changes made to the beach part of the beach lot (terrain changes made to the regular part of the lot do stick when moving).

Two things have caught my eye in SimPE that might hold a key to transferring the coves and other beach shapes along with the beach lot to a new location, i.e. to "fix" the beach which reverted back to stock straight shore line upon moving.

The first one of those things is the Lot Description (LTXT) data in the neighborhood package. It has a special box which contains elevation offset data: 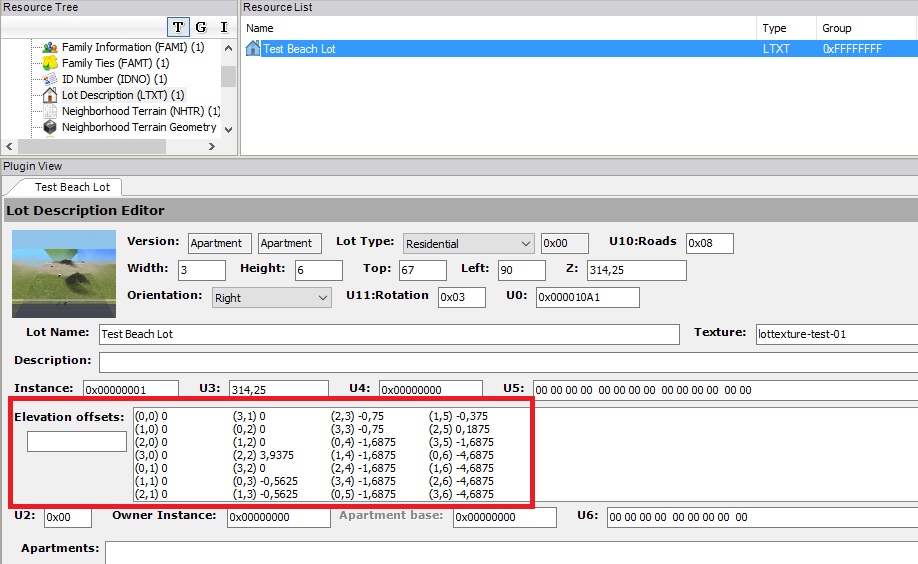 The second thing includes Lot Geometry Data (LOTG) found in the lot package itself. My testing lot had 12 of those.

(1) Here's what the lot looked like after it's been edited, but before it's been moved to a new location in the same neighborhood: 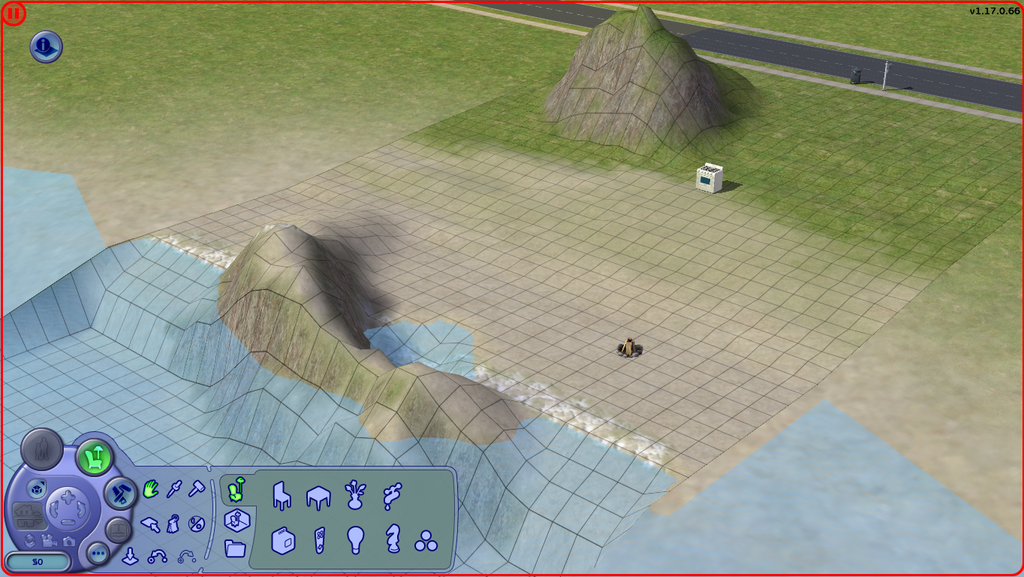 (2) When it's moved to a new location, its shore line reverted back to default, while the hill on the regular part of the road remained there: 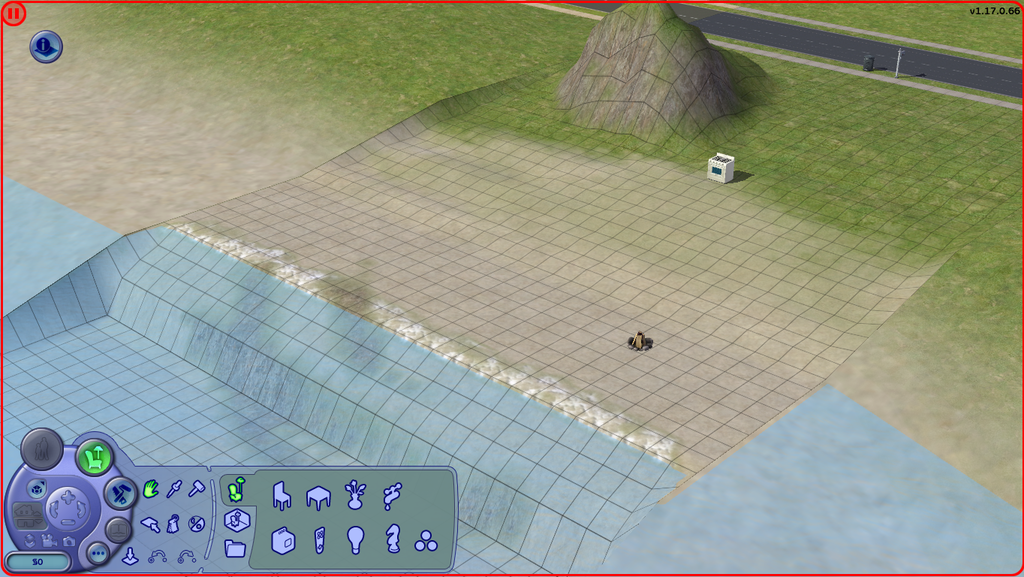 (3) This is what I did: after I edited the terrain in (1), I saved the lot and quit the game. I opened SimPE, opened the neighborhood package and extracted the LTXT for that lot. I then opened the lot package (from Neighborhood\Nxxx\Lots), and extracted all 12 LOTG nodes.

I saved the neighborhood package, closed it, and opened the lot package. I deleted all 12 LOTG nodes it had, and then added the LOTG nodes I extracted in (3).

When I opened the lot again in game, this is what appeared: 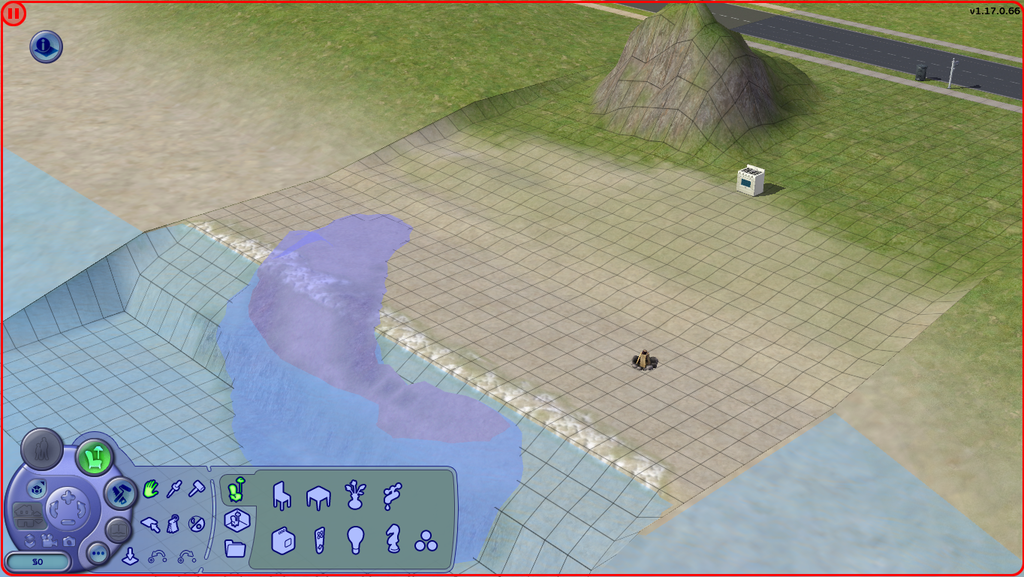 It's see-through, shaped exactly like the cove that was actually on the terrain in (1), but it pops/disappears as soon as it's acted upon using terrain tools: 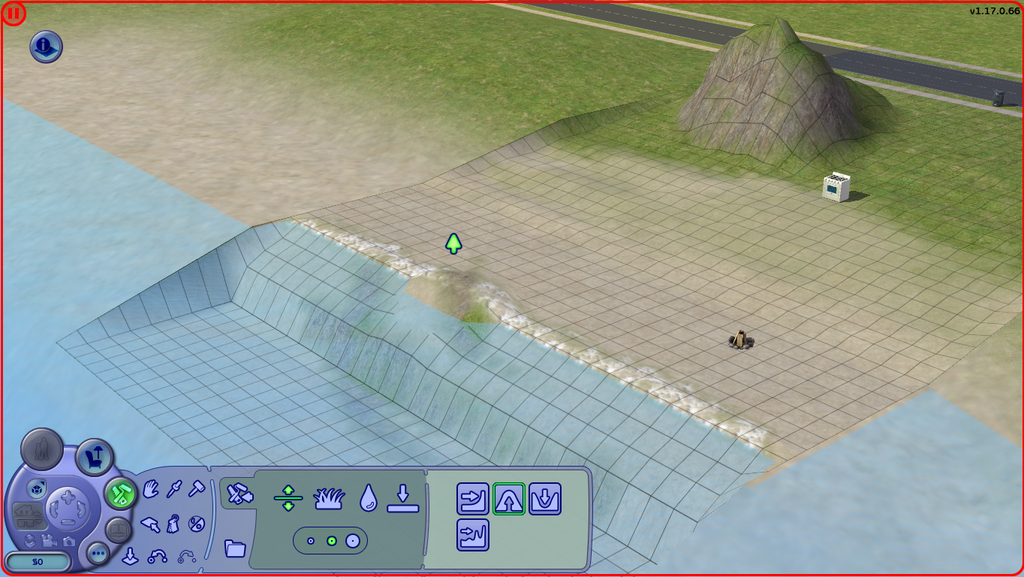 Right now, I have little time on my hands to toy around with this. I may add additional info that I perhaps stumble across, but if anyone decides to experiment with this on their own, their findings are very welcome.
DJ. who?
Essential mods, cheats, tips & tricks for The Sims: Castaway Stories || Felicity Island for TS2 (populated version by k-athleen now available too!)
"What do you have to be nervous about? You're someone on the internet." -A.M.R.
Advertisement
topp

Method 1: Transferring LTXT data and the entire lot package
Since extracting only the LOTG nodes from a lot did not do the trick, I tried moving the entire lot package; the result was successful. This means that the game definitely does store coastal elevation data in the lot package, but decides to wipe it as soon as the lot is transferred somewhere else. (Moving solely LTXT nodes (and leaving LOTGs behind) doesn't do anything; there is no visual change.)

This tutorial can be followed by anyone who wishes to keep their fancy shore lines fancy even after sharing the lot with others. However, I'm curious to know where exactly are the coastal elevation values stored, so I'll be posting to this thread if I find any additional info.

In this tutorial, I'll be transferring a beach lot from Bluewater Village (neighborhood N001) to Riverblossom Hills' Downtown (subhood of neighborhood N002).


1) Create your beach lot. I'll be naming mine Bluewater Cove. Make desired terrain structures on the beach. Save the lot, and exit the game. 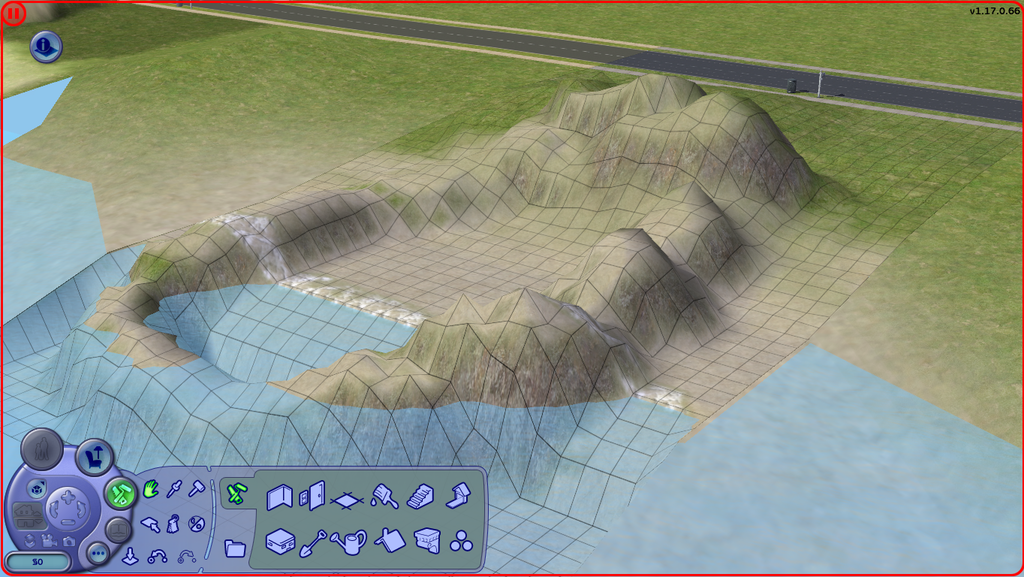 2) Open SimPE, and open the package of the hood your beach lot is in. In my case, I built Bluewater Cove in the regular neighborhood, so I'd open N001_Neighborhood; if you built your lot downtown, open N001_Downtown001, etc.

Next, click on Lot Description (LTXT) from the Resource Tree and find your lot by its name on the Resource List. Take note of its instance number, specifically, the number in (parentheses). In my case, the number is 5.

Right-click on the LTXT of your lot and select Extract (put it on your desktop). 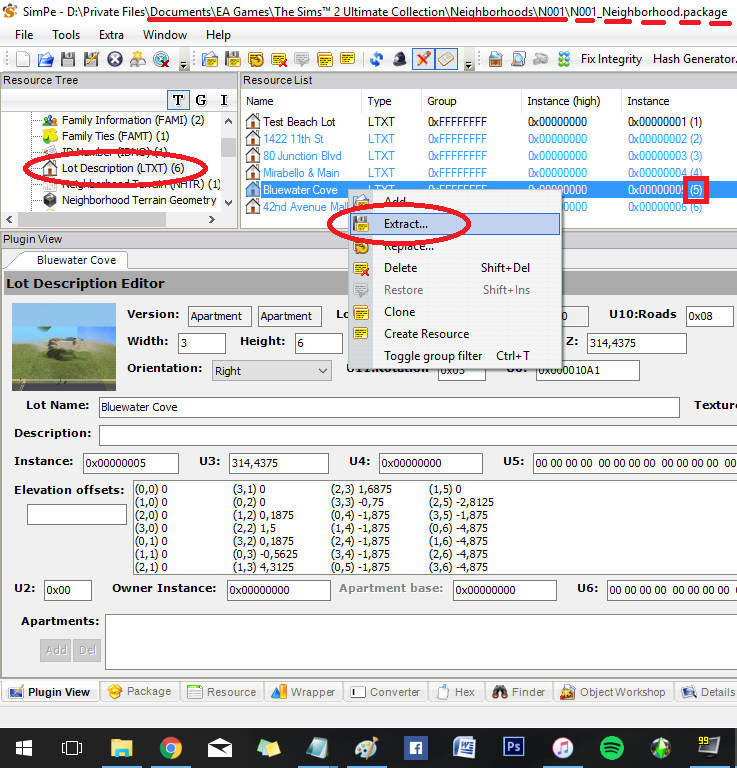 3) Go to Documents\EA Games\The Sims 2\Neighborhoods\N001\Lots, and find the lot with the number you noted down in step 2. In my case, the package I need is labeled N001_Lot5.package. Copy that package to the desktop. 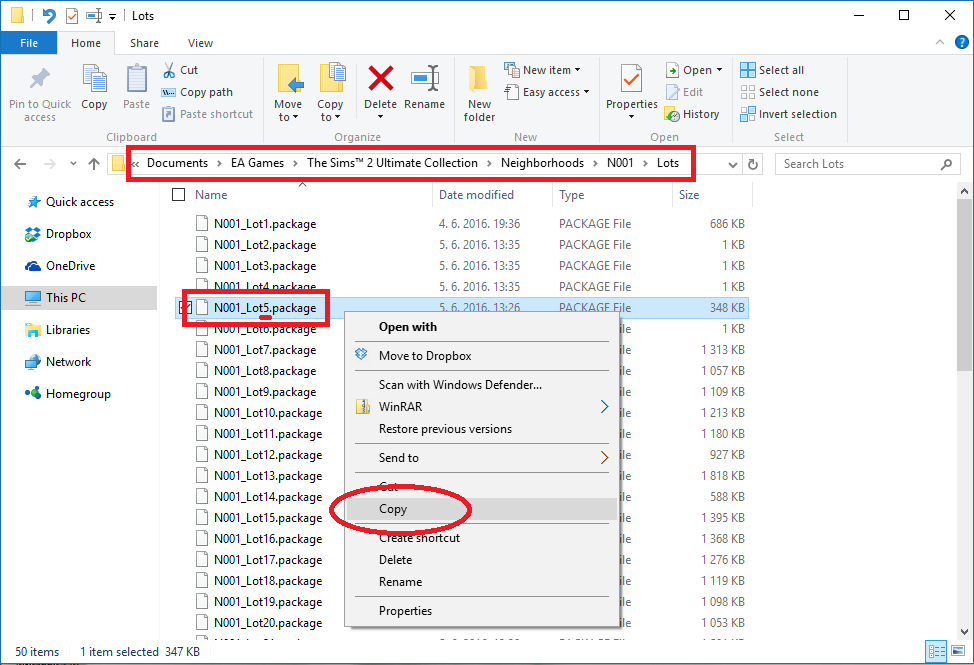 4) Open the game. From here, you can either move the lot to the Lots & Houses bin for moving it across your own neighborhoods, or you can choose to package it to a file for sharing with others. (Once you package it, you need to quit the game, run the Clean Installer on the file, and install it. Then it will show up in the Lots & Houses bin.) 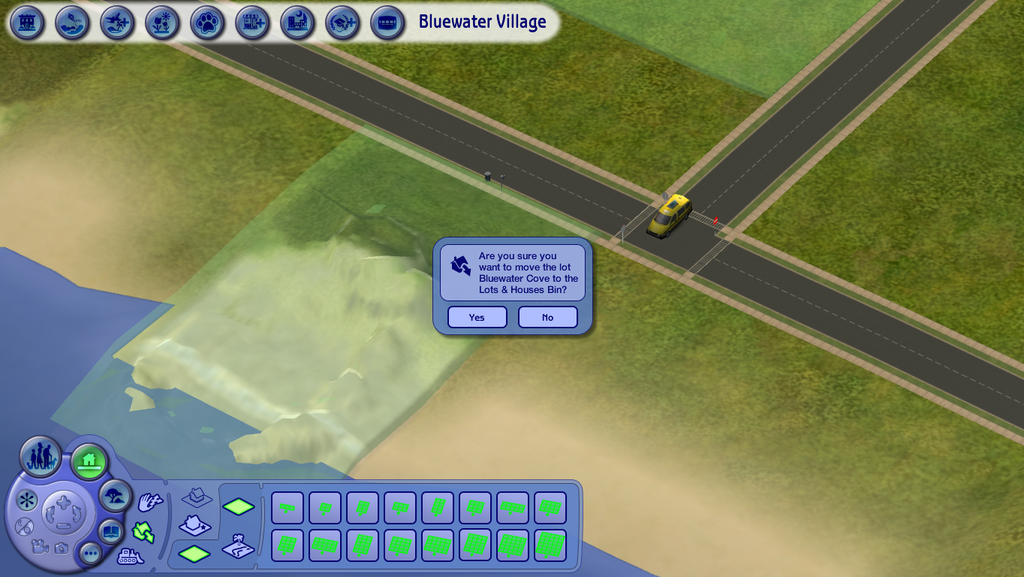 5) Users who have downloaded a beach lot with a fancy shore line should start following the tutorial from here. Place the lot down in the world, and rename it if you wish. For the sake of this tutorial, I renamed the lot from Bluewater Cove to Riverblossom Cove. 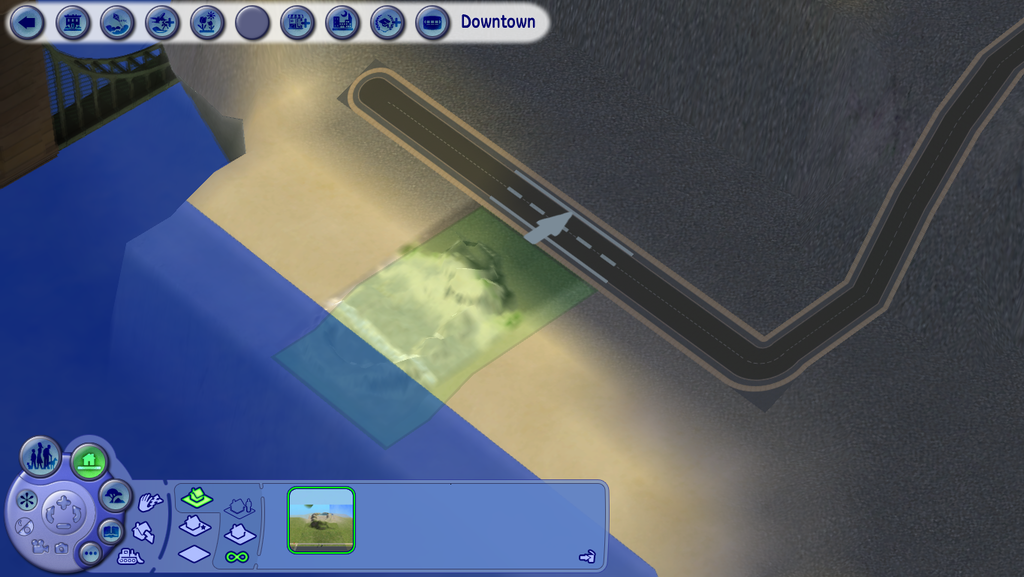 6) Load the lot. The coast should look flat and dull, as seen on a default beach lot. Save the lot, and quit the game. 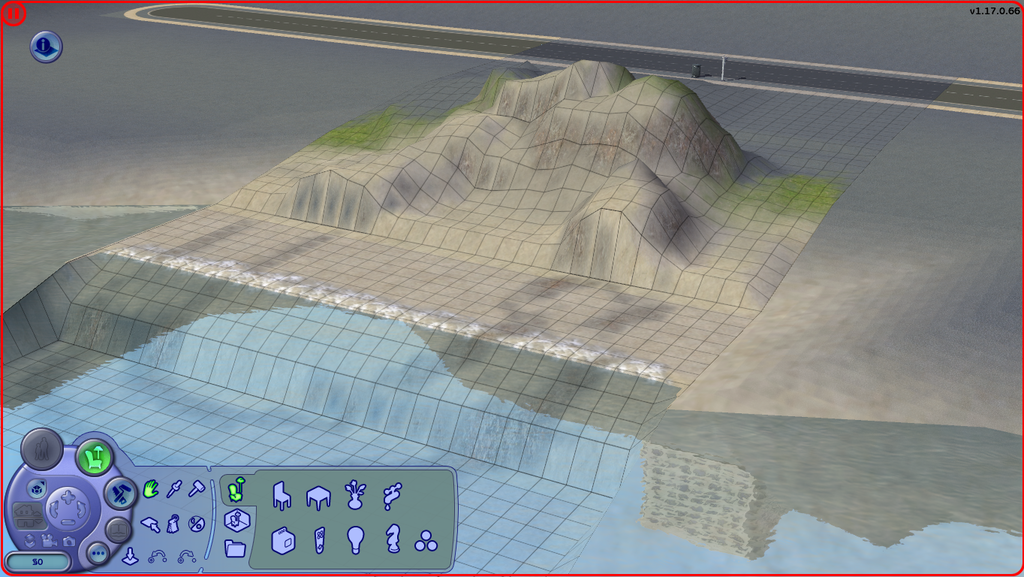 7) Open SimPE, and open the hood package your newly placed lot is in. In my case, it's located in Riverblossom Hills Downtown, so I'll be opening N002_Downtown001.

Find the Lot Description of the newly placed lot (Riverblossom Cove). Click on it, and make sure you're in plugin view (bottom bar of the window). Take note of the following values: Top, Left, Z, Orientation, U11:Rotation, Lot Name, and Instance.

Also, take a separate note of the number in the (parentheses) next to the instance number in Resource List. In my case, it's 46. 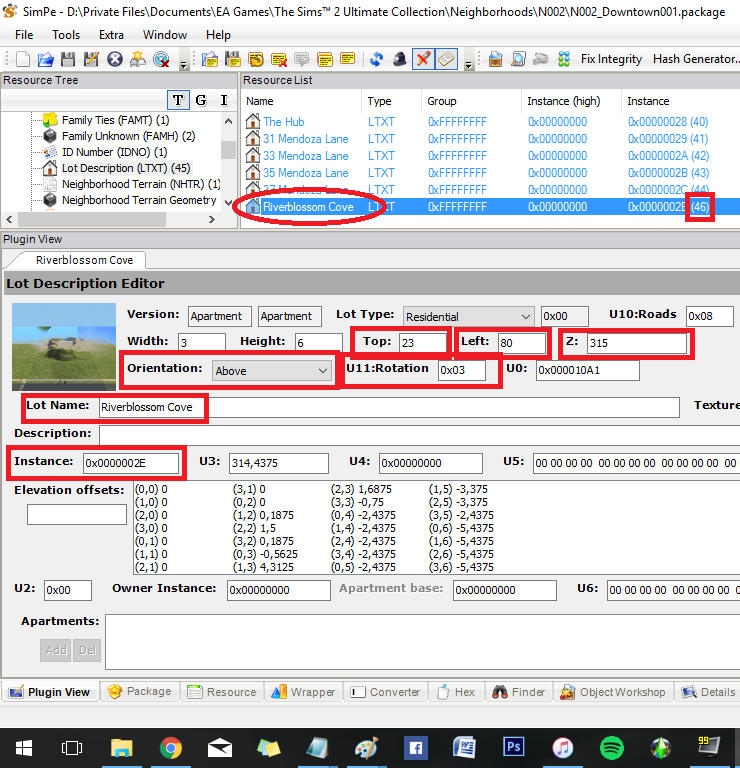 9) Right click on any LTXT, and click Add. Find the extracted XML of the LTXT you extracted in step 2, and add it.

10) Update the values of the newly added LTXT. Change its Top, Left, Z, Orientation, U11:Rotation, Lot Name, and Instance values with the values you noted down in step 7. Then hit Commit on the far right side. 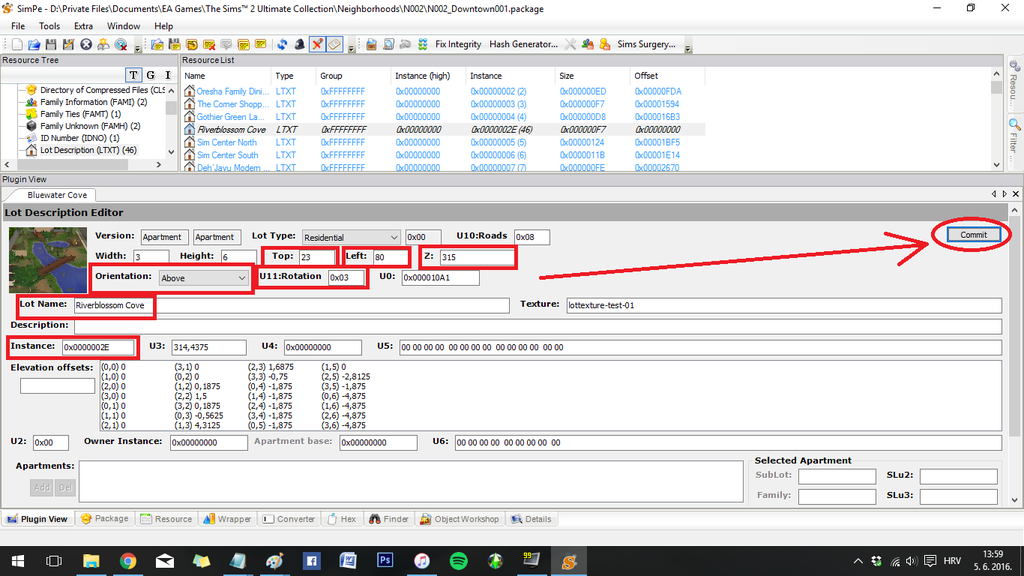 Do not hit force commit; instead, just click on the Plugin View from the bottom bar.

Save the file, and close SimPE. 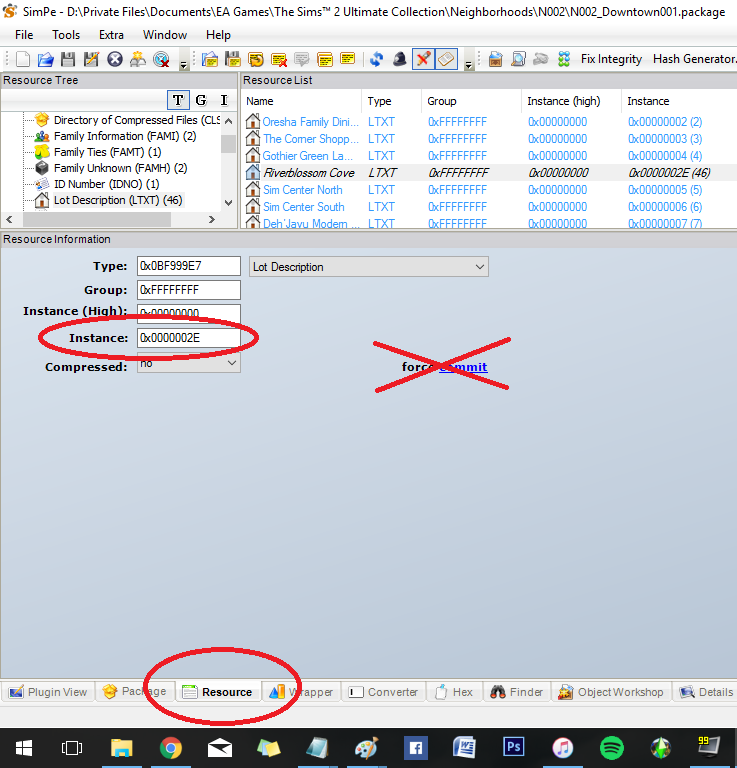 12) Go to Documents\EA Games\The Sims 2\Neighborhoods\N002\Lots, and find the lot with the number you found in (parentheses) from step 7. I'm looking for the file N002_Lot46.package. Delete the file. 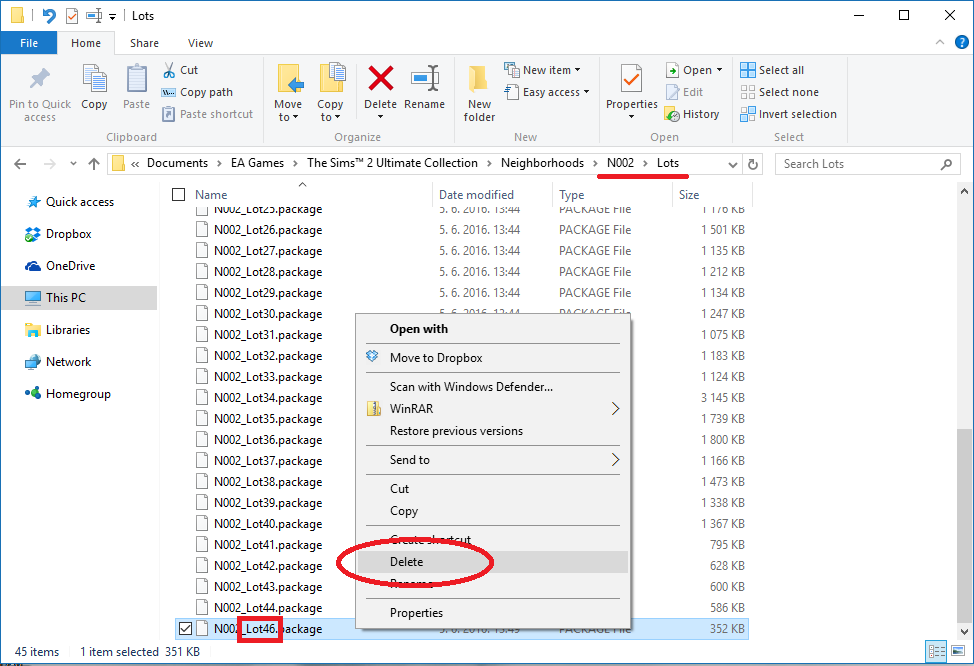 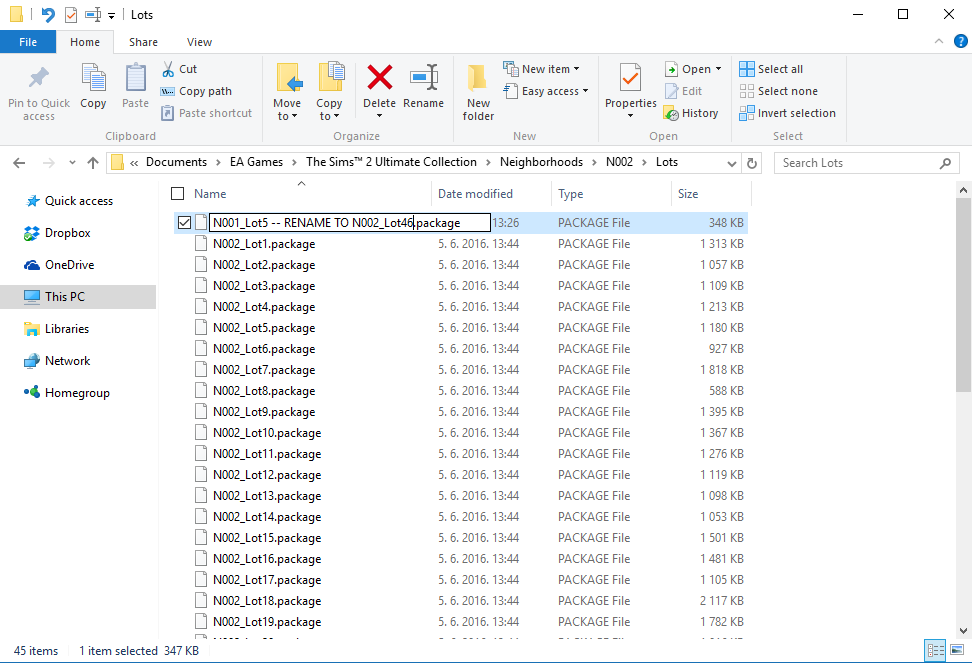 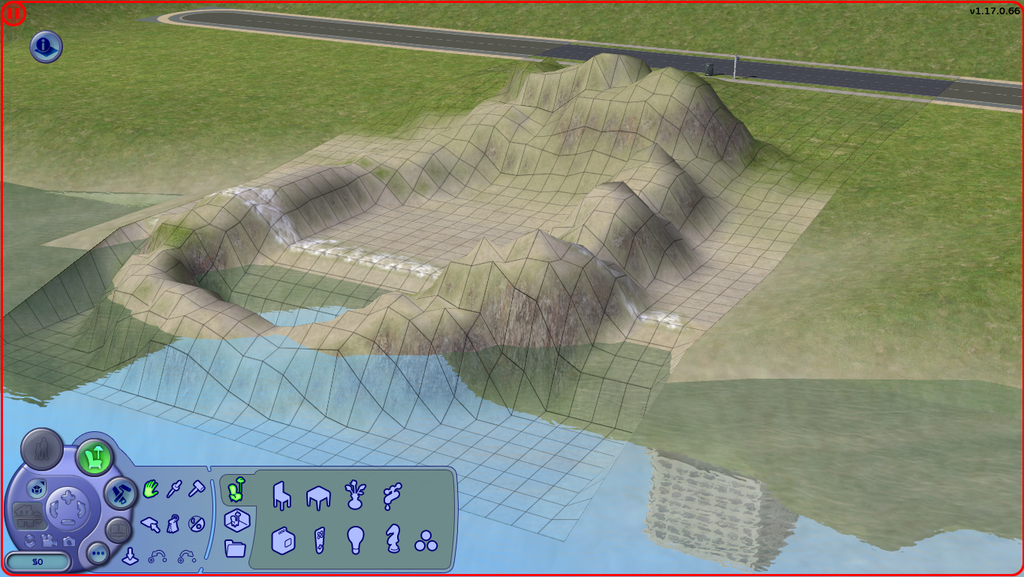 NOTE: If you've transferred the lot to a different terrain type, i.e. from a lush (grass) terrain to a concrete terrain, you'll notice that the lot skirt (terrain surrounding the lot) and base lot terrain still show the old terrain texture (grass instead of concrete). To fix it, download LotAdjuster, run it, select the neighborhood (or appropriate subhood) your lot is in, select your lot from the list, click the Advanced button and tick Override base terrain paint. Then hit Finish, and you're done - both lot terrain and lot skirt should now have the appropriate terrain type. 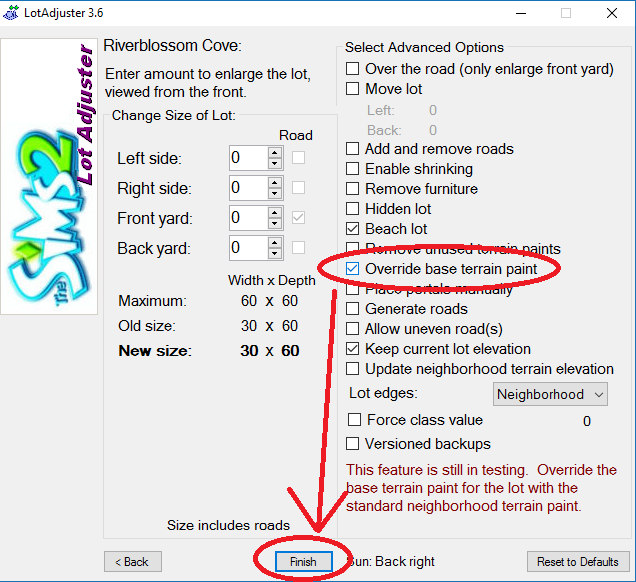 As a lot creator, if you create a beach lot and make changes to the coast terrain (and wish for the changes to appear in users' games when they download the lot), you should include the following in your download thread:
*It might also be ok to exclude the .sims2pack file, and install the lot manually into a neighborhood. I haven't tested it, but I do not guarantee that the neighborhood won't blow up - I'm not sure if the lot index is updated if we just add an element (the new lot) to the list (of already existing lots), as opposed to following this tutorial and therefore making the game itself add another element to the list, the way the game is used to adding lots.
DJ. who?
Essential mods, cheats, tips & tricks for The Sims: Castaway Stories || Felicity Island for TS2 (populated version by k-athleen now available too!)
"What do you have to be nervous about? You're someone on the internet." -A.M.R.
Back to top