Help with covered stairs??
Hey all, so I've been working insanely hard trying to accurately duplicate my friends apartment on Sims 4 for them, since they love the game and wanted to play around with designs of their house, etc. but I'm having an issue with the damn roof and stairs. I've already had to give up on one area and just use a ladder in place of stairs because it was stairs or a roof, but I needed a way into their attic. XD So, this is what I'm trying to build in the game, I'm to the point where I can either just build a roof at the top portion of the stairs, or I can do a roof over the top AND bottom landings, OR I can use stairs as the "roof" part to "cover" the stairs from weather and such, but then I can't place roofs on the landing tops, and stairs look kind of silly there, but it would at least be fully covered like it is IRL. Is there ANY item that I could use (just sized up/down) or any mod or anything to make covered stairs? Someone PLEASE help if you're able, I'm desperate. I try not to use mods much because I've had games crash because of them but right now I'll do whatever works lol. If you guys want updates of pics of my build in game I can do that and post them here. I already had to give up and cop out with the roofs on the top of the house because I couldn't get them to look right AND the rooms to be usable so I went for function over looks. Here's a reference picture of the actual building I'm trying to replicate and the covered stairs in question. I already had to give up on building the bilco door below the steps cause I used a roof for that too and even though it didn't TOUCH the stairs above it, they still would delete every time. UGH. 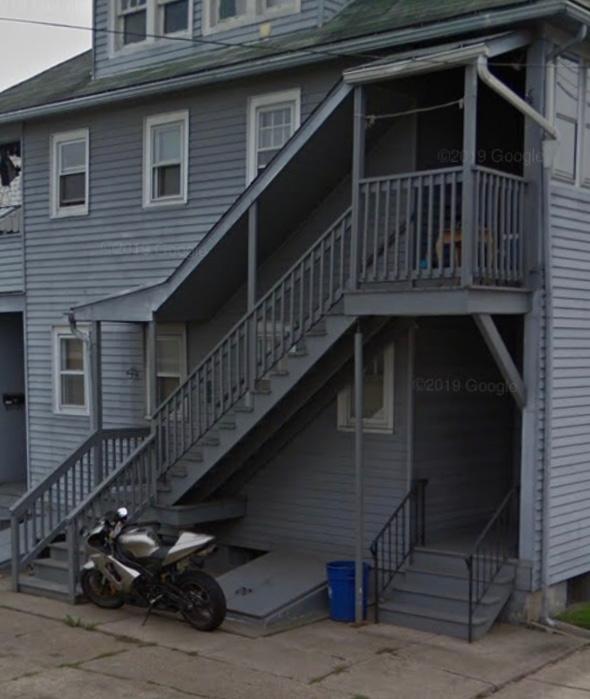 Ah!  Try making a room around the stairs, then place a steep shed roof.  Don't put the house on a foundation though.

You have an L landing. There are stair tutorials on YouTube that may help you.  https://www.youtube.com/watch?v=_ouAWXuVFTE
Back to top