So this whole thing started after playing in Bridgeport and noticing how things were somewhat of a mess. Despite that, I embarked on a project to reinvent it, but real life kept getting in the way, and I never got around to picking it up again. I was itching to make my own neighborhood, so I launched CAW for the first time to see what I can come up with. After playing with CAW for a few weeks - creating and deleting half-baked worlds I eventually lost interest in - a world I was satisfied in began to take shape, and Tempest Heights was born.

Originally, I wanted this to be base game-friendly, but then I had to use bridges, so...yeah. Additional requirements will be added here as progress is made. I will try my best not to include any store content, but I don't forsee myself adding any. Eventually, I'll also release a blank version of the neighborhood eventually so that only World Adventures is needed. Unfortunately, I won't be removing the bridges to make this base-game only. Or maybe I will. I'll let y'all know if ever.

Tempest Heights - Update 01
This message has been deleted by apollozaibatsu.
rainaelf
Test Subject
#3

It will be fun to see this progress. My only suggestion at this point is to not bite off more than you can chew, as they say. Keep this within a framework of what you may actually complete and what is playable when done. Keep us posted. Most important, have fun. I love working in CAW.
apollozaibatsu
Test Subject
Original Poster
#5

Tempest Heights was an ambitious project, but it might've been just a tad bit too ambitious.

I envisioned Tempest Heights to be a massive, urban world with most of the city made up by individual lots. As I progressed, I worried about how to fill every lot with customized buildings after I hit lot 100 - 100 lots in a really dense layout, and that wasn't even half of what I had planned. Eventually, I realized that I was making a map for The Sims 3, not SimCity. If I continued and somehow managed to finish the map with all the lots, it would be very crowded in-game, not to mention being unplayable for some people. It would be a monster map that would cause crashes and massive lag.

I lost interest in finishing Tempest Heights and deleted the map, but I soon discovered how to add custom content to CAW. With a slew of deco buildings in my arsenal, I can finally achieve that urban look and feel without necessarily crashing the game. The original Tempest Heights map is gone now, but my interest in making a map has been renewed. Hopefully, I actually manage to finish it this time.

Thanks for following the development of Tempest Heights. I may rename the neighborhood, but I'll post updates as progress is made. For now, enjoy this teaser picture (taken in CAW) of what's to come: 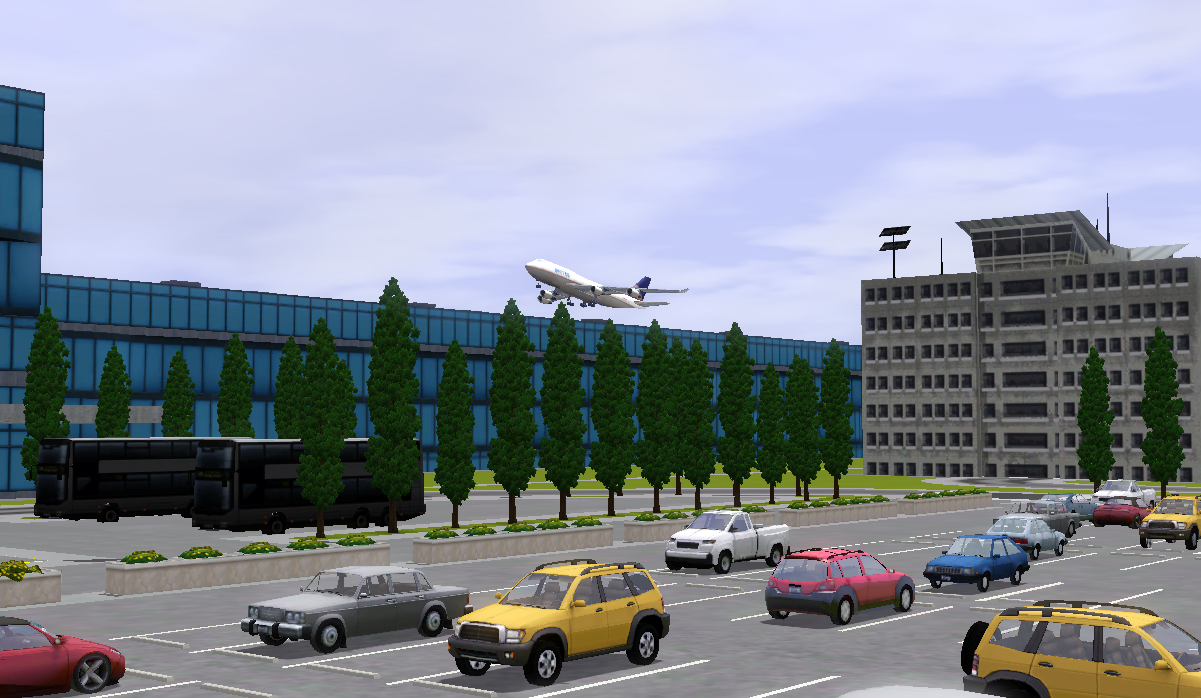 Good! It sounds like you have a plan now that you are more apt to be able to manage. Worlds can take years to make, so it is important to be sure they can be played after all that time and effort. Keep us posted.

After starting from scratch because the previous plan for Tempest Heights proved too bulky, I've decided to take a different route with the map. I needed a flagship project for me to stay interested in keeping this going, so I decided to make an airport. At first, I tried to make a small one using Moria's conversion of Criquette's Sims 2 airport props, but after some trial and error, I was dissatisfied because I wanted something bigger. While a bigger airport set wasn't available, I downloaded some building conversions from ATS, some assets from tjstreak, and got to work. The result was better than I expected.

I'll post a proper update after polishing some things. In the meantime, enjoy these pics of the airport at day and night.
apollozaibatsu
Test Subject
Original Poster
#8

Tempest Heights International Airport (IATA: THI, ICAO: THIA) is an international airport located off the coast of Tempest Heights. Built on an artificial island, its location provides quick and easy access to the city and is served by both the Tempest Heights Metro and airport buses. The airport was opened in 1927 on Missionary Island and originally catered to seaplanes. With the advent of jet aircraft, the airport was expanded, eventually requiring the flattening and joining of both Missionary and Breakwater Islands.

FINALLY, I managed to finish 1 part of my planned neighborhood. Getting this thing done was tedious since I wanted to make it realistic, but at the same time, work within the restrictions of CAW. I originally planned this airport thing to be much smaller (comparable to the airport in Barcelona by Nilxis), but I kept expanding until I ended up with...this. This airport is huge. The rest of the city would fit on the island it's on if I compressed everything.

Anyway, the airport is mostly deco save for a couple of lots:
There's also the airport control tower, but I'm keeping that in the unroutable part of the airport. Speaking of routing, around 80% of the airport is sims unroutable. Realistically, you wouldn't have civilians running onto the taxiways, ramps, runways, etc, so sims are restricted to the "public" areas of the airport such as the lots listed above. The camera would have a bit more freedom moving around though, but not too far as the airport is right up against two edges of the map. Also, I was planning on at least making the exteriors of the builds on the lots somewhat...pretty (?), but EIG wasn't having it and neither was I, so I'll save the decorating when I actually build in the game.

So there we go, my first actual update. It's not as long as I had hoped, but I feel like I've provided enough info for now. I may make some cosmetic changes to the airport in the future, but for now, I'll keep it the way it is.

NEXT UPDATE: Streets and Neighborhoods

~jaw drops and shatters on the floor~ 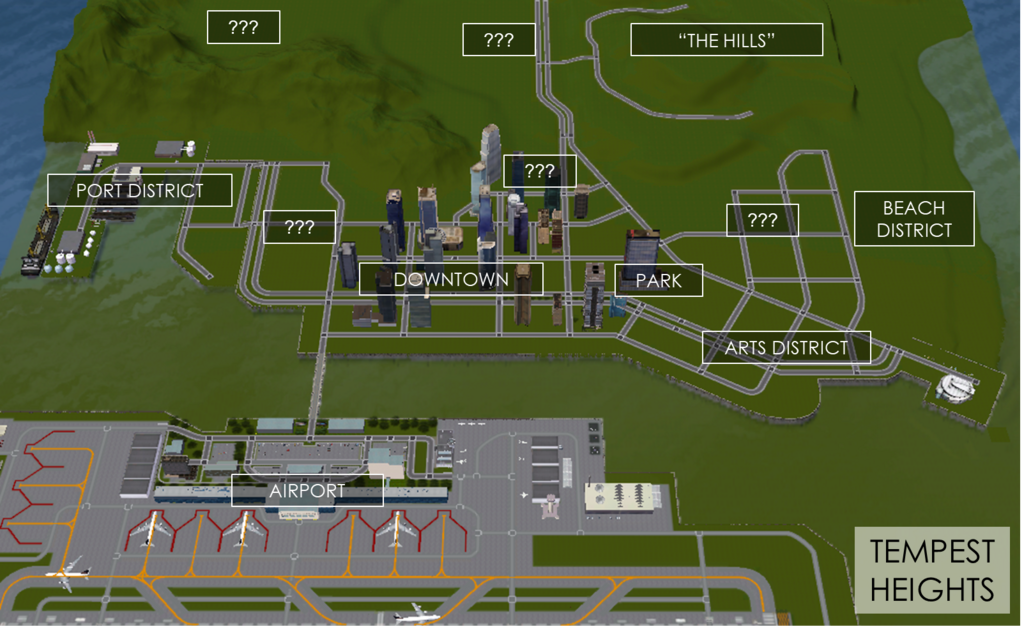 Turned off fog in CAW (RIP water), otherwise everything's going to be a sick shade of gray

After finishing the seawall that rings a huge chunk of the city's coastline, I've finally gotten around to working on Tempest Heights' street and district layout. It's not complete yet, but here's a small teaser of what I've done so far. Thought downtown is currently riddled with deco buildings and skyscrapers, I might opt for a more modest skyline. I just placed all the deco buildings I liked so that I can select the ones I'll be using quicker. I'll have to figure out where the rabbitholes will go next so that I can place them down.

If you have any suggestions or comments about the layout so far, feel free to give me a heads-up in the comments!
Nilxis

I'm so glad that you ended up making an airport much bigger than the one I made for Barcelona because it looks so cool and adds a lot of character to the world. It's the best airport that has been made in the Sims I believe, I haven't seen any other like this one

Find all my creations here:
My blog: Nilxis Designs // My Tumblr page: http://nilxis.tumblr.com
Back to top