Hi there! You are currently browsing as a guest. Why not create an account? Then you get less ads, can thank creators, post feedback, keep a list of your favourites, and more!
Quick Reply Print version
Search this Thread
Replies: 2369 (Who?), Viewed: 354245 times.
Page 4 of 95
pirate_wolf_12

- An urban neighborhood.
So, it is it's own neighbourhood or is it a sub-hood? There aren't any more details and the translation isn't the best.

- Celebrities are there and you can even flee the paparazzi!
So we can beciome a celebrity, but there are also a few pre-made NPC ones as well?

- If you are celebrating the paparazzi can cause scandals and expose your private life.
Sounds funny.

The vampires sleep during the day, do not eat like the sims.
Yes! Sounds good to me.
Advertisement
Ranissa

See the poster above you. He's wearing a shirt that has abs.

No, there was a Sim with a guy with actual abs. People on the ea forum are jacked up on CC that they forgot that only the muscular sims displayed muscle definition, and they went on about how theres a new skin for sims, As well as the larger breast issue... blah, blah, blah... anyone with a good amount of logic cant tell you that:

That there is the potential for new sliders in the body department, but there aren't muscle 'definition' slders, even though there are muscle sliders ALREADY in game. They went as far as saying that ea used CC for the trailer. People have used CC for so long, or even been around it so long, to the point they actually forgot that this is EA's game, They can tweak the engine and add what every they want to it. I'm sure its not that hard for them. EA doesn't NEED any CC... they make the stuff themselves and get paid to do so. EA doesn't need modders, players do.
sharkloverplayer

Yea I would say they could tweek it because they added the opacity feature with ambitions. I think the muscles are real because their introducing bouncers so chances are their updating the muscle slider in the ep.
babaji_mendez

There's also a possibility of the muscles being some kind of tattoo, remember you don't actually need ambitions to have tattoos.
KiaraSims4Mods

OMG!! Look what I read, I kept smiling during this

- An urban neighborhood.
- Celebrities are there and you can even flee the paparazzi!
- New facilities.
- You can be a vampire.
- You can become a bartender.
- Some new job: Actor, mixologists.
- Your Sims can play in the series and will be very well paid!
- If you are celebrating the paparazzi can cause scandals and expose your private life.
- You can take a band and then be mixology (more jobs)
- The vampires sleep during the day, do not eat like the sims.


I like how the paparazzi can expose your life. I wonder if like your sim is wealthy and married if she has an affair will it be exposed? I would love to see the "MEDIA" involved in The Sims 3 game. I am so glad they put in a bartender game.
juansfalcin

I do believe that the EP will have a lot more romantic interactions. It's not just about SUperstar, but also Hot Date.

Is it just me, or are these Vampire's starting to seem (gloriousoly) World of Darkness (the Pen and Paper games, Vampire the Masquerade) in their ways? Bloodlines with powers, selective siring, blood-packs, and so forth...
Lady D

I was just going to point out the boobs on this sim here: My eyebrows kinda flew up, but somehow I doubt EA with include a slider that increases breast size, unfortunately.

One could only wish. Really, really hard!
Achromagus
Banned
#85

Can anyone EXPLAIN their reasoning for doubting breast sizes? Instead of just "I don't think they'd do that for some arbitrary unexplained reason"?

Everyone who thinks they're real is giving explanations, but those who don't just say "nah I dont think so".

Alixen, I mentioned that above but I think you are right. They seem very White Wolf WoD, Masquerade or Requiem to me! I played a sexy vampire for a few years in a campaign so am very excited about this. I think most of the fans will like this if its true. While not sparkly, vampires in this system are sexy, smart, and cruel. They form bloodlines, select their victims, have children, and have a very deep social and political system. Essentially they exist within our own society but live in their own dark world, the night, while controlling powerful people, parts of the church, and even governments. There are lots of Vampires, Requiem paperback books out there that can give you a very good idea on these types of vampires and you can download them from rpgnow.com if you wish to read them immediately. Its a very cool world and one of my favorite rp systems.

I don't really want vampires in my existing worlds but I can certainly see starting a new world with them. And I am a person who has never seen or read Twilight or Trueblood or any of those current shows so I can't say whether I like them or not, only that I am more than likely too old for them.

I also never play ghosts or mummies and never played supernatural in Sims 2. So this is a big deal if EA has found a 'creature' that appeals to me!
Lady D

Well, my reason is because I don't think EA has expanded on any of the sliders in the past two expansions (yes/no?) and because EA tends keeps to the family/wholesome side of things.

I'm not saying that they're not real, as they obviously are in that picture, but will EA include that in the game? I don't know. There's also screenshots for the next stuffpack with a sim with larger breasts. *shrugs*

I don't know why you're so defensive about this.
Ive

That vampire in the video looks cool. And I don't even like vampires
- I give up.
qwertyfish11
Test Subject
#89

So I'm hoping it's not a sub neighborhood. I never got world adventures, so i'm not sure how that ep worked ???
And what is Twinbrook? Again, I didn't get ambitions, so I'm Kinda out of the loop here. I did download Riverview, but that's just another world, not a sub world...
sisvl
Lab Assistant
#90

The world has gone to pot when we get into fights about sim's breast size. The chest on the trailers certainly looks real, and If i were more like Mr. J.M. Pescado, I would say they were shopped. Theres a posibility that its an option to get breat-enlargements in-game, but that seems unlikley. Yes, they could be using new, magical, EA-made sliders from CAS, or they could even be using custom sliders from here. (and that doesnt make sense, as they can make their own)
Austin0331

I have been dying to make a "Fireflies" music video on the Sims. Now, with an electric keyboard, cieling disco light thing and bubble blower I'm sure going to be able to do it after this EP. EA's coming out with stuff out the ass now, with this EP, and Ambitions didn't come out that long ago! But whatever happened to Fast Lane Stuff? They totally skipped making a trailer for it (even though it was mentioned before this) and skipped on to this.
"I've been really busy being dead. You know, after you murdered me. But I think we can put our differences behind us. For science. you monster"

Maybe it's just custom clothes mesh - is ts3 like ts2 where the clothes includes the body?
"You can do refraction by raymarching through the depth buffer" (c. Reddeyfish 2017)
HystericalParoxysm

Yes, Inge. Pretty much exactly like TS2 in that regard - so it's possible that sim is just wearing a top that makes her tits look bigger. Or, more likely, is just a bit fatter than the other sim - as she does look thicker in the arms than the other sim, who is -very- thin.
my simblr (sometimes nsfw)

“Dude, suckin’ at something is the first step to being sorta good at something.”
Panquecas, panquecas e mais panquecas.
Achromagus
Banned
#94

You guys must be talking about a different picture than the one that is actually (I assume, since it's the only one with enormous breasts) being discussed. 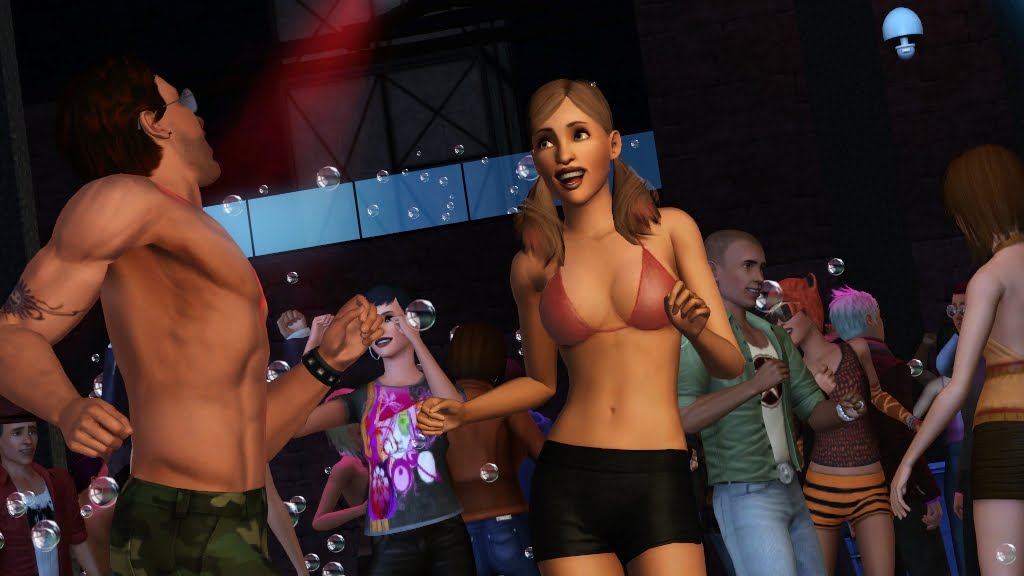 I don't know why you people are discussing that. The problem in the picture are those gay bubbles. roflmao
My Simblr
Drakron

Yes, with World Adventures (and so EVERY PATCH after WA had included then).

Again with this argument ... last time I checked I was not in Australia were women with small breasts are illegal.

Also do you want for me to bring up ratings? How about The Godfather (I and II), Dead Space, APB, Dragon Age, Mass Effect ... ever since Riccitiello Reign in EA they have done plenty of M rated games.

The ONLY rating boards that EA cares about are ESRB and PEGI, PEGI is even more "liberal" that ESRB, having a breast slider is not going to change the rating.

So what exactly are you saying?

First, that women with larger or smaller breasts somehow "break" the T rating and move it to the M rating ...

Second, that they created sliders (or meshes) to show women with larger breast sizes that is a considerable effort and then NOT include then in the final product.

Because your logic is Women with larger breasts -> WILL SOMEONE THINK OF THE CHILDREN (never mind the game is rated Teen) -> EA: WHAT HAVE WE DONE? QUICKLY ... DESTROY THE IMMORAL BREAST SLIDERS!
sisvl
Lab Assistant
#97

Relax, folks. If EA chooses not to put breast sliders in the game, continue using the custom ones.
wndy26

I trully hope we get apartments back...what good is city living if you can't have apartments!
qwertyfish11
Test Subject
#99

and if they do have a "slider" for this, i doubt it'll be labeled "breast size", probably just "body tone", like the already existing "muscle tone"

There isn't apartment living or there isn't no good with city living?
- I give up.
Back to top