Just a pair of pictures I took before putting Sims 2 on back burner while I work on my Sims 3 project. I caught Cecilia red handed as she came down from jumping on Ryan and Renee's bed. Silly little sim. 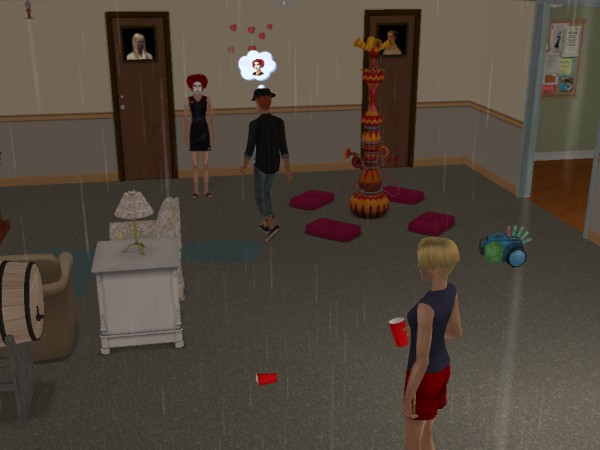 Enjoying her first experience with a keg of punch, Ariel watched in mild interest as Puck approached her cousin -- his ex-fiancée. She might actually overhear something useful rather than second-hand gossip. Hopefully she'd remember it. 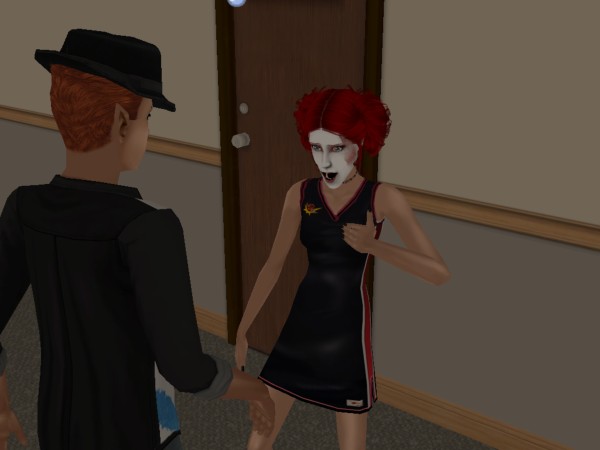 There was quite a bit to hear, actually. By the time Puck had finished blaming Hermia for deaths ranging from his mother to her sister to her lover, Ariel was gulping down punch in hopes of not remembering a bit of this. She'd forgotten how good Summerdreams were at sticking knives in the most tender emotional spots and twisting them.
Please support the Sim National Labs [email protected] team!
Stuff I've made!
DezzyDoesThings

Bigfoot sure is havin' a good time with these lovely ladies.

"Oh look, my grandchild is now an elder. They grow up so fast. Gee, I wonder when I'll finally graduate college." Sims 2
blueskii55
Lab Assistant
#1355

Is that a plumbob in your pants, or are you just happy to see me? X.Y.P.! (Examine your plumbob)! :D
"Nothing is what rocks dream about." - Aristotle
Freefalldreams
Scholar
#1356 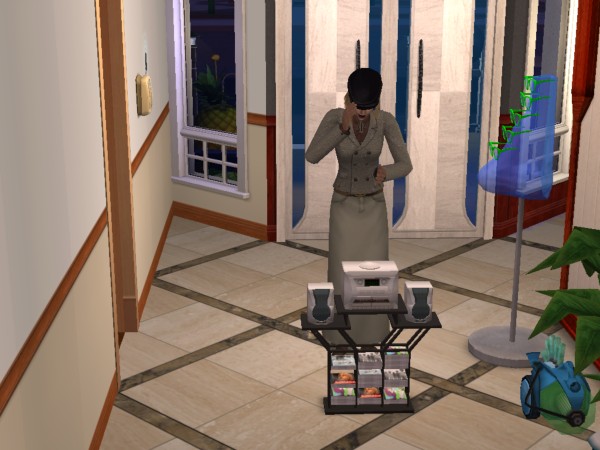 "Hey everyone, look what I found on campus! It even has a stand full of CDs...like anyone uses them any more... Guys? Oh, they've gone to bed."
First ever non-pizza loot from a campus visit in my game!
Please support the Sim National Labs [email protected] team!
Stuff I've made!
Krazzikobbe

My Sim, Caleb Knight, returns! He has recently gotten an upgrade to his fairy form. I turned him into a Warlock to make him seem like a real magical fairy.
maxon

Nice frock
I no longer come over to MTS very often but if you would like to ask me a question then you can find me on tumblr or my own site tflc. TFLC has an archive of all my CC downloads.
I'm here on tumblr and my site, tflc
Freefalldreams
Scholar
#1359 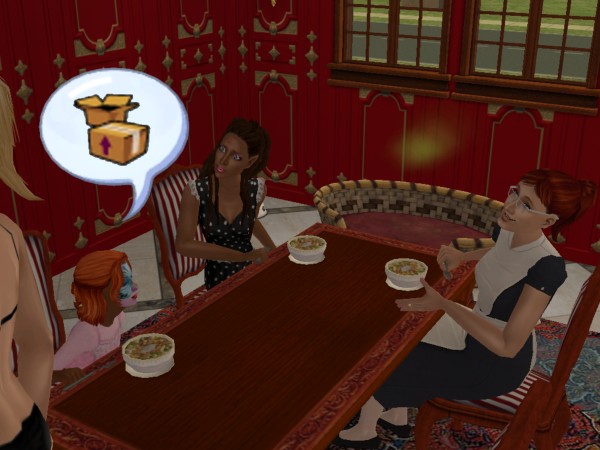 Cobweb Mab: "That shall always be correct, dear lady. You and your bride were our family's servants, never to leave this place. No human who enters our dominion may leave without our permission."
Sarah [only back seen in picture]: "Uh, I guess I didn't explain Cobweb's speech difficulties to you very well..."
Monica: "She seems, er, well-spoken to me."
Bottom: "Unfortunately. Cobweb, people would want to stay here longer if you didn't act like this."
Cobweb: "They shall leave when we permit them too. As they amuse us, that shall not occur."
It's probably good no one realized Cobweb was using the royal plural. 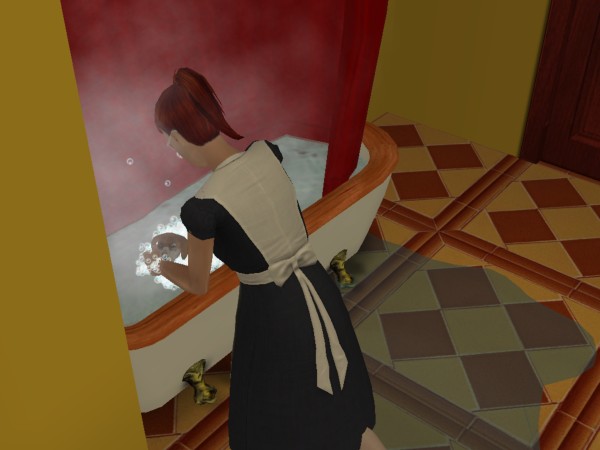 Monica is good for this household, and not really worried by that strange child. Cobweb's canine companion Moth, however, does worry her. That dog is filthy! (And knowing what's good for him, he actually behaved when bathed by Monica.)
Please support the Sim National Labs [email protected] team!
Stuff I've made!
TigerAnne The social bunny showed up when Axel regained consciousness after six hours of sunstroke. It then laughed at the size of his... and Axel went on to have another heat stroke. Not his finest day.
The Starblo0m Travecy! The wurst legracy evar wroted. Now with 100% more Dumbledore.

Now I'm curious about what the negative outcome of that chance card would have been. Seriously, the majority of my sims will never see that much money in their lifetime. Your sims pre-chance card household funds are even more than what most of my sims have.

I hope the pizza's still edible after having the elevator doors close on it... Some outtakes from my Urban family post in my SimVille thread. Just noticed my sim Temple looks a lot like Brittany Murphy from this angle...
"Nothing is what rocks dream about." - Aristotle
k6ka In the what? In the where?! Got a little too worked up about your distaste for pink dresses?
My Photography Website
The Sims Wiki | Flickr | Instagram | Linktree
SimVille | The Sims Wiki Discord server
FFS Lot Debugger options Avoiding corruption How to delete a Sim correctly How to extract the appearance of Sims NPC playability info
kekid2465

k6ka: I had a similar thing last week. Short story: I had a female student using the micowave but she failed and there was a fire. I told her to put it out and as she did that her boyfriend had steped down the dorms outside staire. But he did not enter the building. He stoped at the door, or should I write: IN the door, panicing. The only bodyparts visible was the arms and maybe some feets and maybe, maybe a part of the face. The other parts of him was still outside. (Yes, she did put the fire out. But this is the first time I had to use "Maxmotives" at a dorm).
PenelopeT

Testing out new backdrops I made for the local photographer in my game, to use in her business.

The second image sort of reminds me of the scene in the 2005 Pride and Prejudice movie, when Darcy is walking across the field towards Elizabeth.

Some recent images from my game since my reset: 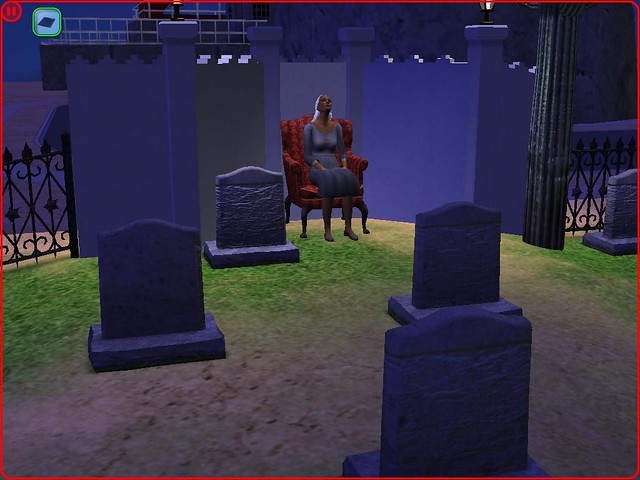 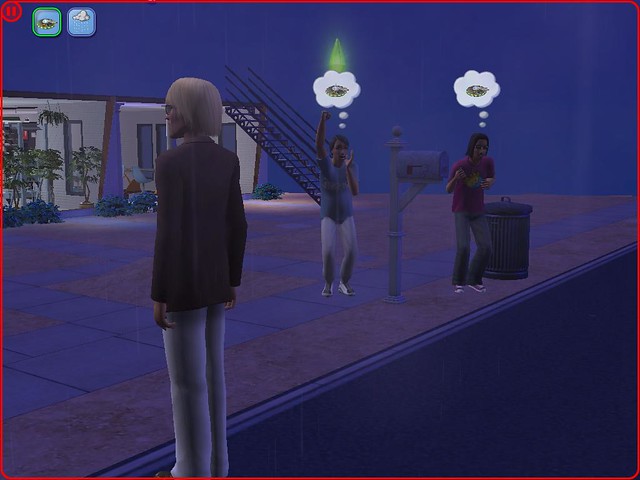 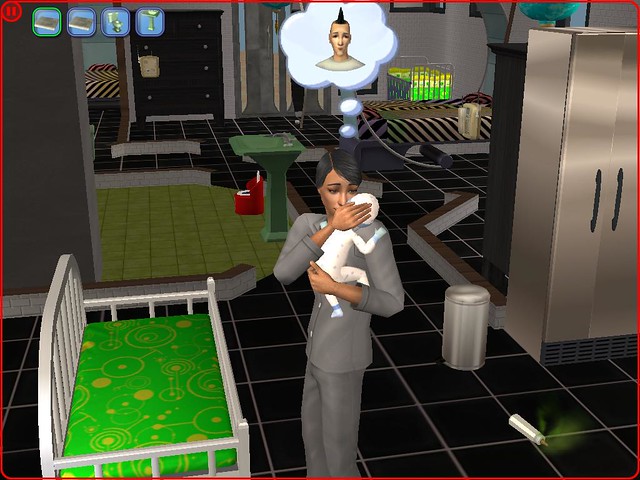 "Oh look, my grandchild is now an elder. They grow up so fast. Gee, I wonder when I'll finally graduate college." Sims 2
grammapat

Nervous Subject and Agatha Crumplebottom seem like a perfect match. They made this bad-tempered cutie..

Stay not, be gone; live, and hereafter say,
A madman's mercy bade thee run away. 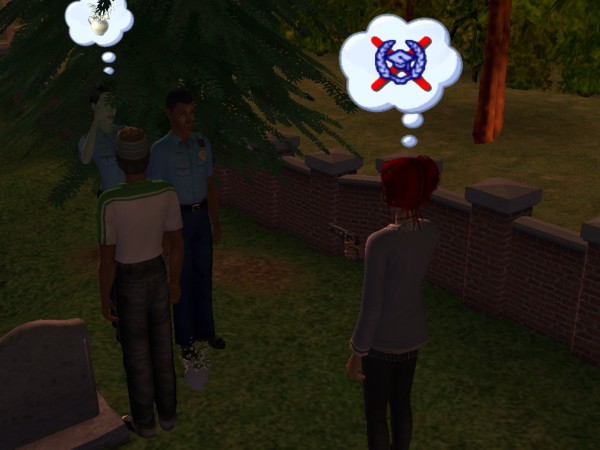 Unfortunately, Paris and Romeo's mutual attempts at being merciful toward each other backfired because of someone they'd forgotten about. Someone whose softly-spoken words were not even noticed, because Lady Capp had been punished for speaking up too much.
"I beg for justice, which you, Prince, must give. Romeo slew my sister, and perhaps my brother too. He'll do it to all of us given the chance. Romeo must not live."
Always forgotten. Nobody cared if I achieved anything. Oh, I could visit at college, could get my hair dyed by dear Romeo -- couldn't go myself, couldn't keep the purple when everything broke down. Romeo. Romeo did this. Romeo killed her. Hermia's gaze was fixed at the back of her secret brother-in-law's head, and she wondered if she had even spoken aloud. For all the notice she'd been given.
"Prince, if you deserve your badge...for blood of ours, shed blood of..."
It was too late. He wasn't going to do anything. Had her lips even parted once? No matter. She had something that could speak louder. 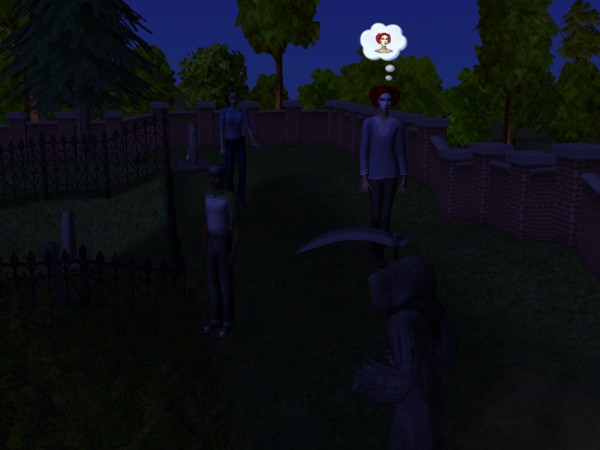 Which led to the Reaper coming to escort Paris Prince off the estate, Romeo's head still being intact (for the moment) and Hermia, stunned, reflecting that she really was a disgrace to the family -- not only had she flubbed a murder, she'd killed the wrong person entirely. Oh, she was useless... 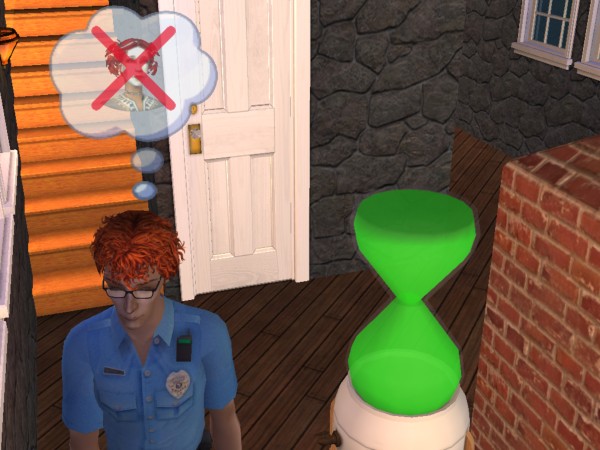 Obviously, Hermia's inability to think beyond herself led to everyone else thinking about her too. Chester Gieke was not doing so in favourable terms, for reasons that should be very clear. He might have thought somewhat better if he'd realized that even the bottles of Elixir around the house had been used as psychological tools to manipulate Hermia into being an obedient Lady Capp...if she didn't do what she was expected to, she'd never have the chance to use them and prolong her chance at college. Not that it did her any good...
Please support the Sim National Labs [email protected] team!
Stuff I've made!
Fouksia
Lab Assistant
#1375 Trailer park challenge parents are the best parents. Their kids have the best immune systems. Good mental health, too. No issues whatsoever. Note how hard she's trying not to look.
Back to top