"Beach babes can't see me spying on them from here!" 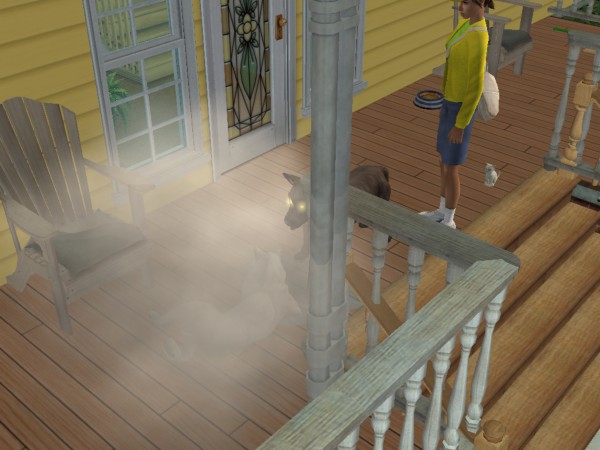 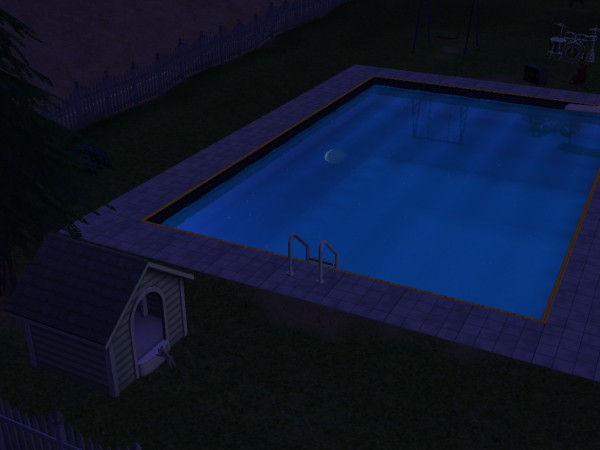 Strangetown has such a gorgeous night sky, free from light pollution... 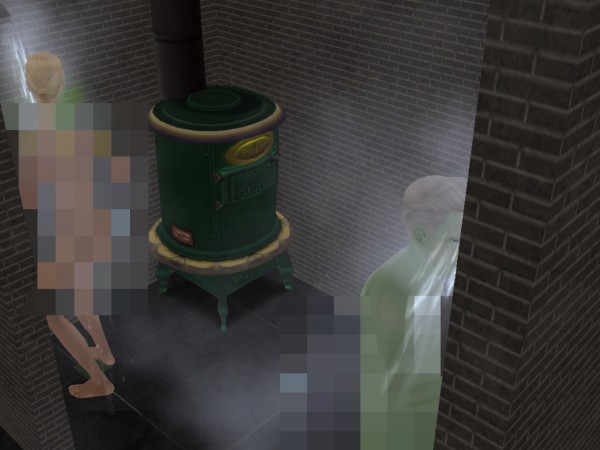 Jenny and PT #9 try out the amenities at 94 Road to Nowhere. 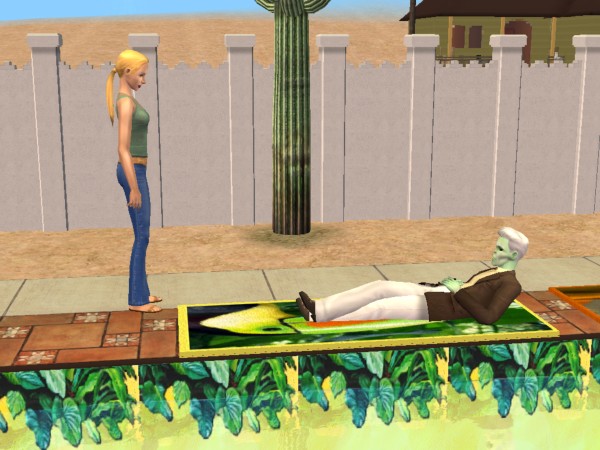 "THAT'S WHAT YOU GET FOR STEALING THE NEWSPAPER!"

@RoxEllen1965 Good idea - I would have preferred bigger pictures so that they could be wide enough to cut out without looking funky to me but my current screenshot-taking program is the only one that allows me to take pictures while in full-screen mode for some reason.

Well, he certainly lives up to his name. (Ignore the Batbox - I moved it later.)


He made matters worse by autonomously going to the bar and buying drinks. I sent you there to work as the DJ's assistant! Get back to the dance cages!

We were able to scrounge up some money through prostitution - er, I mean dates, yet he couldn't help but feel as if he was betraying his first love.

(He rolled those 2 wants on every single date! At least he's loyal?)

Hungry and hoping to score a free meal, he went over to the club next door. There was a thread about in-game scenarios and it reminded me of this:


Whatever, man. According to SimPE, YOU'RE unemployed!
Increase the Game Difficulty With Mods
RoxEllen1965

You confused me there. You're replying to a post that I made in a different thread! (Bloopers and Funny Sim Pics)

I should have been more clear in my other post. I've gotten into the habit of moving the game camera around when I take a screenshot so that most of the action is taking place away from the edges of the screen. This makes much it easier to crop the screenshots. It shouldn't matter what resolution or aspect ratio your monitor is set at. Play with the camera and practice moving it around, zooming in and out, etc.

If the User Interface/control panel is taking up too much of your picture, there are a couple of things you can do. F10 will hide the control panel, date meter, etc. The camera will work just as it always does in normal game play. Press F10 again to unhide all that stuff.

The TAB key will not only hide all that stuff, but also put you into "Cameraman Mode" or "free camera" which gives you much more control over your camera (press TAB again to go back to the normal camera). The keyboard shortcuts for controlling the camera are at the following link. Some work for cameraman mode and others are for the regular game camera.

I was thinking that a bigger screenshot would also mean a bigger focal point even though part of it was cut off for the version number. ...I don't think I'm making sense even to myself. I'll just go read the link and spare you my windings.

About the F10, it does hide the UI but pressing it again doesn't bring it back. I need to fix that.
Increase the Game Difficulty With Mods
Charmful

I just wanted to take some interior shots and then Anton wanted to make a salad, Melody wanted a night cap. She still seems fond of her husband's cute backside. This what I guess they do now that they have kidlets, sneak around the house after hours in their underwear. Celeste isn't going to let a little thing like death prevent her from performing her cafeteria duties. 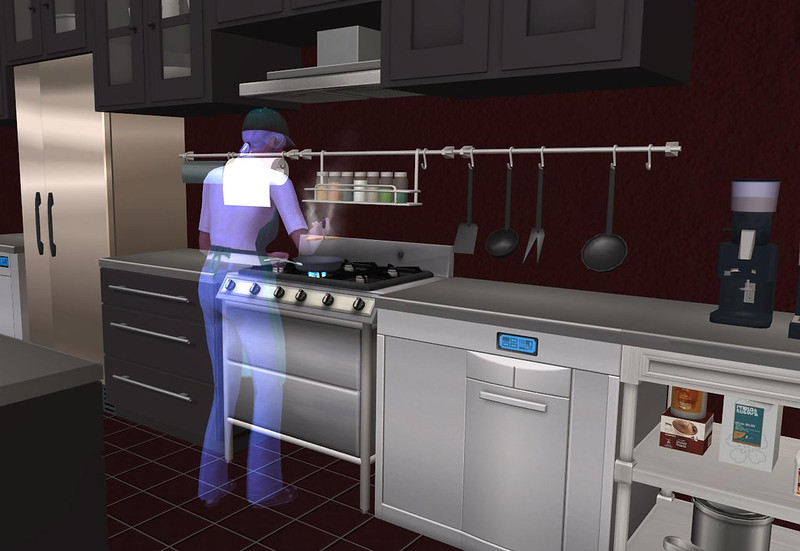 Quote:
That's some dedication to to your job right there.
k6ka

Just took some pictures for an update to my Simville fanon thread. After I was done shooting at my location, Serge Barb and Count Nery Wood (internal name Count Cooper Baena) got into a fight autonomously with each other. 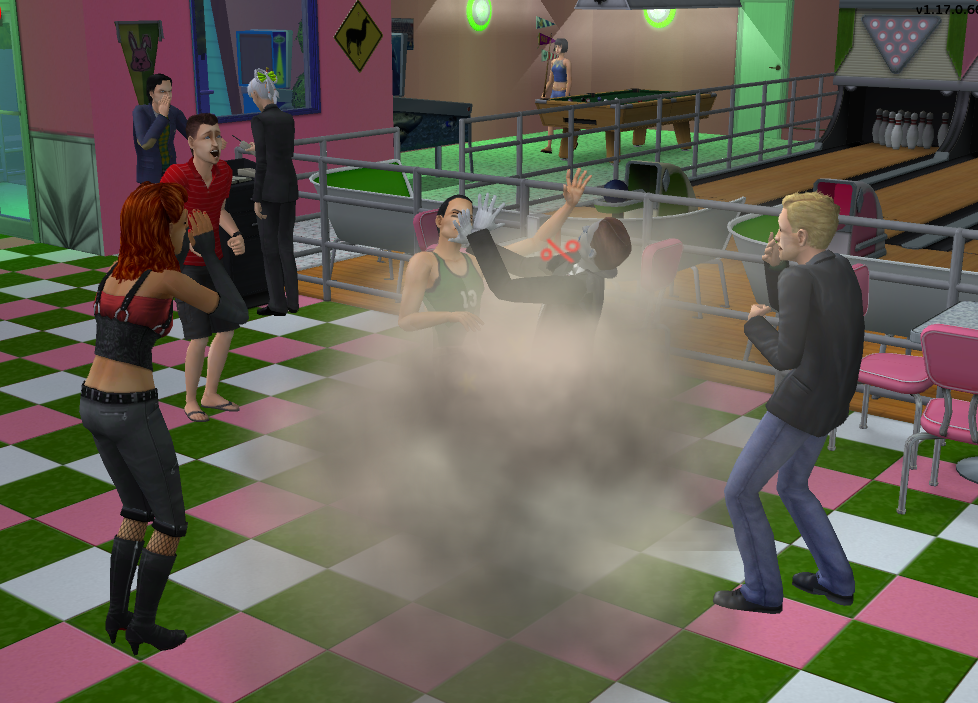 As you can see, Ginger Newson is playing pool in the background as if nothing's happening, Cody Patzer has the strangest agape mouth, and the dining host is just completely ignoring the commotion behind her. Omfg, I named the baby Milo and when he grew up, he automatically got the hair of Milo Yiannopoulos!!!

Didn't find any "random movie thread", so here's an endless diaper loop for you XD https://www.youtube.com/watch?v=7RL-PjoUxSg
She must be a pedantic germaphobe who never gets happy with the baby butt!
mdsb759
Alchemist
#1488 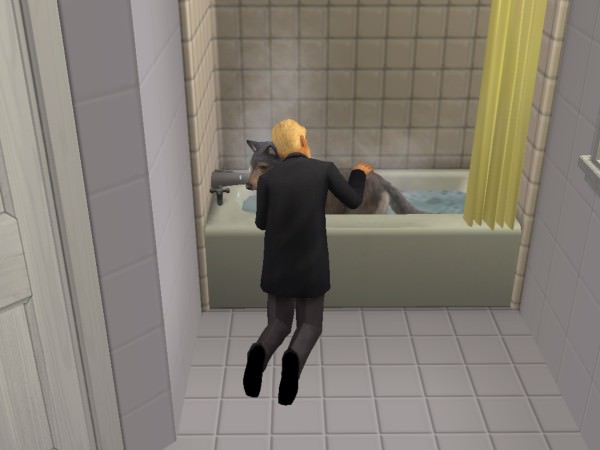 Finnian had an hour where he was home alone, and he told me exactly what he wanted to do with it! As soon as he was done with his homework he commented on how stinky both the family dogs were, so I decided it was time for a doggy bath! 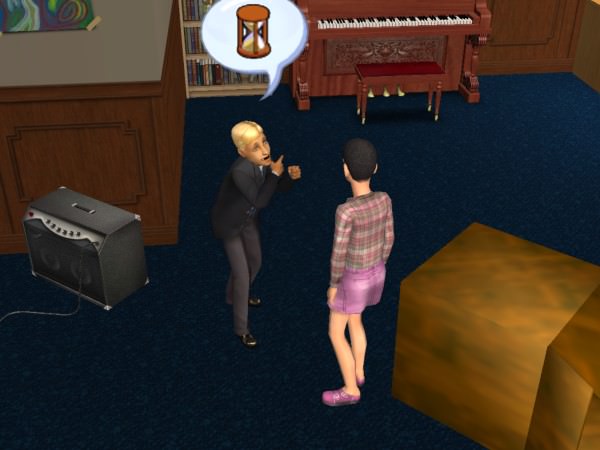 Gabriel, who's aging up tonight, tells cousin Michael, who was a toddler yesterday, how excited he is to be a teen. 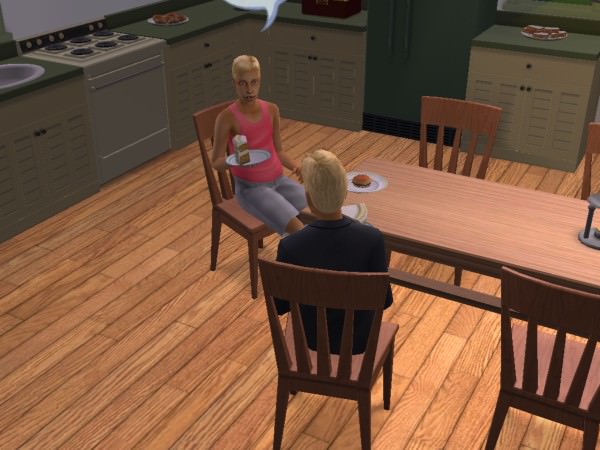 After growing up, the two brothers discuss teenhood and their impending college years. They're in a bit of a tricky spot--if their elder parents die while they're both away at college, their house will be completely empty and the dogs may end up taken away--so I wonder if they're having a discussion about it. 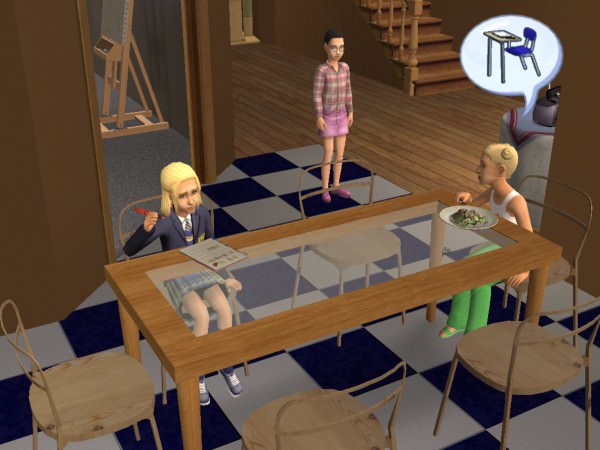 I wasn't ever planning on playing the Ottomai (considering they're not even supposed to be in my game) or adding any new sims to this 'hood myself, but Sharla's insistence on coming home with all my kids put the idea in my head--for a second.
Also, Michael hasn't even had his first day of school at home, and he came home with both his boy-cousins in the earlier part of the rotation.
I've got one or two things on MTS, but most of my stuff is on my main site here:
http://simcessories.blogspot.com/
(Now recruiting budding creators.)
frogz2007
Lab Assistant
DELETED POST
6th Nov 2017 at 9:32 AM

This message has been deleted by frogz2007.
velvetina
Forum Resident
#1491 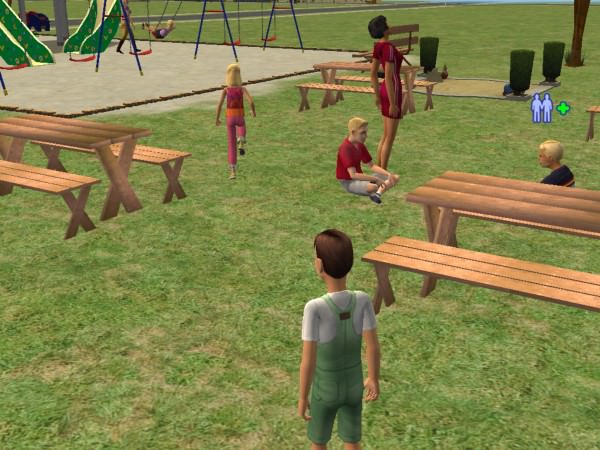 Saturday is Park Day for every Agnar Sound household with kids. Though, teen Harrison (in the red shirt) didn't mind tagging along with his parents and little sisters. Some of the cousins showed up as well, and Julia happily plays tag with her cousin Michael all morning. 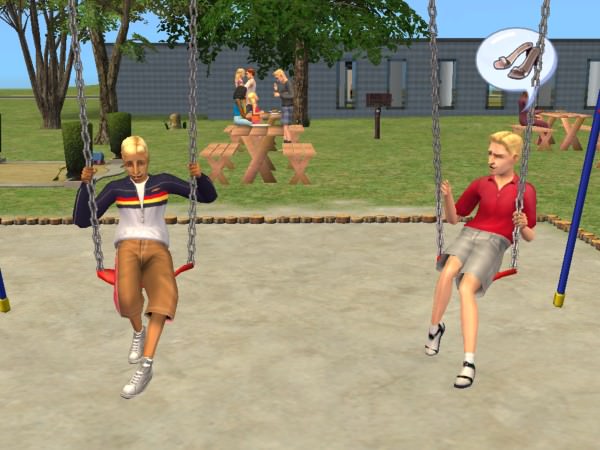 "You don't wear high heels and makeup? Like, ever? You gotta at least try it, it's fun!" says Harrison.
"I dunno. Maybe when I move out. I'm not sure how my parents would take it," replies his older cousin Gabriel.
"Dude, they'd be fine with it. This is the 21st century!"
They absolutely would, by the way. And that's Harrison's parents slow dancing in the background. 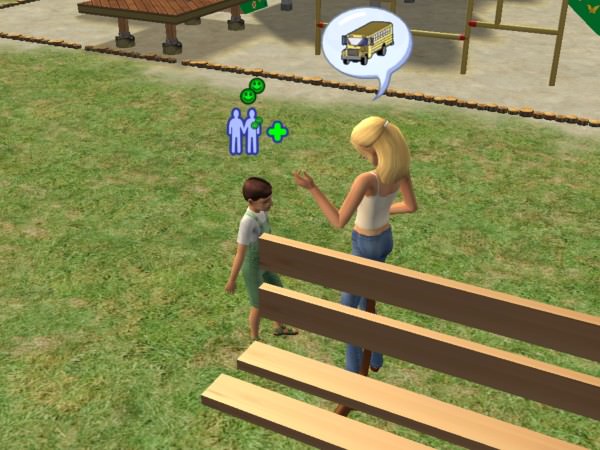 Julia, now a teen, tells Lucas, whose household I'm now playing, how excited she is to be going to high school. 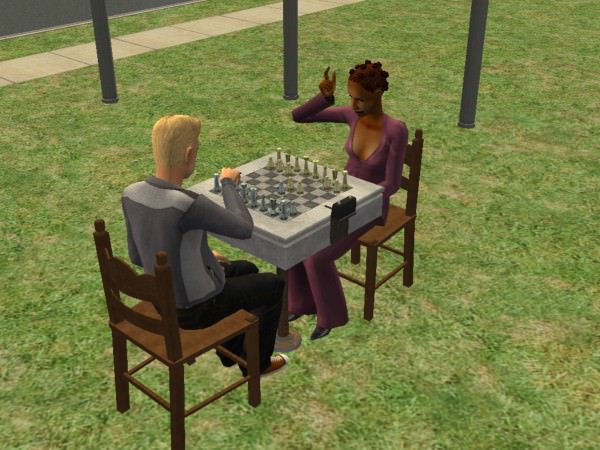 While Doyle and Lila spent their park day slow-dancing and otherwise getting romantic, Emil and Sophie immediately rolled wants to play chess. (They did end up slow-dancing later, though.)
I've got one or two things on MTS, but most of my stuff is on my main site here:
http://simcessories.blogspot.com/
(Now recruiting budding creators.)
grammapat 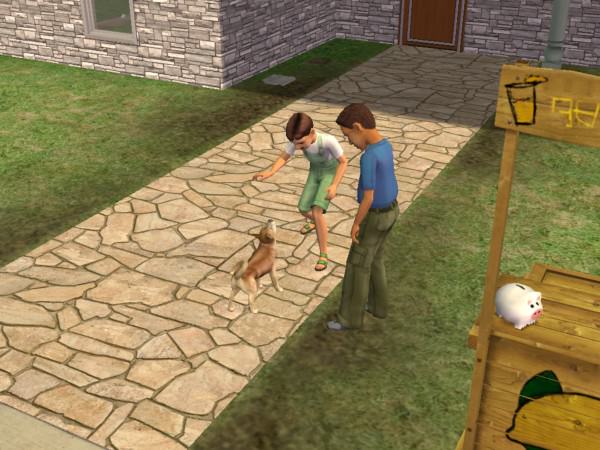 It's Family Day, which means the whole 'hood is over at Agnarsson Prime. Keith and Lucas, whose subfamily is the only one without a pet, quickly befriend their uncle and aunt's dog. 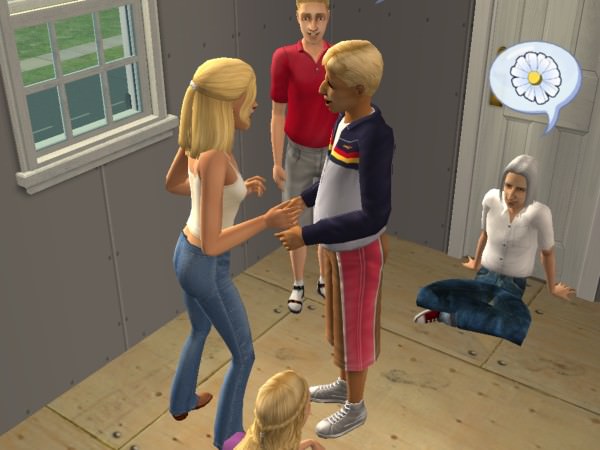 Julia and Gabriel get along swimmingly. Maybe because they're both knowledge sims? And sims' sense of a good socializing spot continues to be less than satisfactory, as a good portion of this party happened in the laundry room. 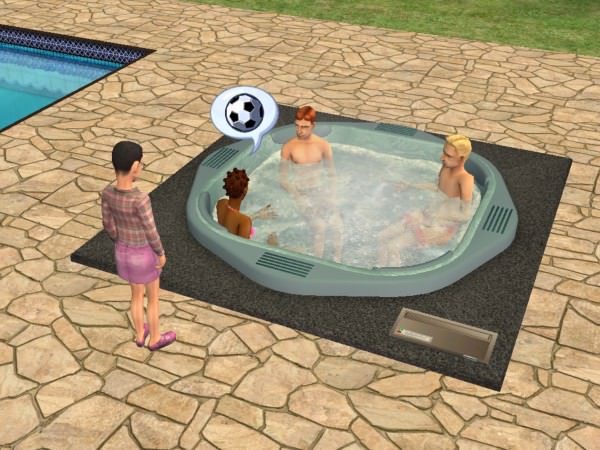 Here we have Sophie Miguel, her husband Emil, Emil's older brother Doyle, and the couple's youngest son Michael, who is curious about what the grown-ups are discussing. They sure stayed in here for a long time. Then again, none of them have a hot tub, so they've got to take advantage while they can! 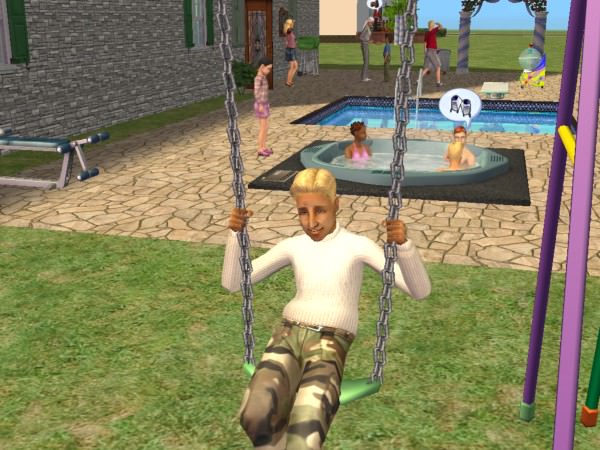 Finnian reflects on his life, staring out into the unclaimed fields of the neighborhood. He's off to college at 6:00, you know, so he won't be back here until he graduates--or, I suppose, until the next family day.
I've got one or two things on MTS, but most of my stuff is on my main site here:
http://simcessories.blogspot.com/
(Now recruiting budding creators.)
Freefalldreams
Scholar
#1495 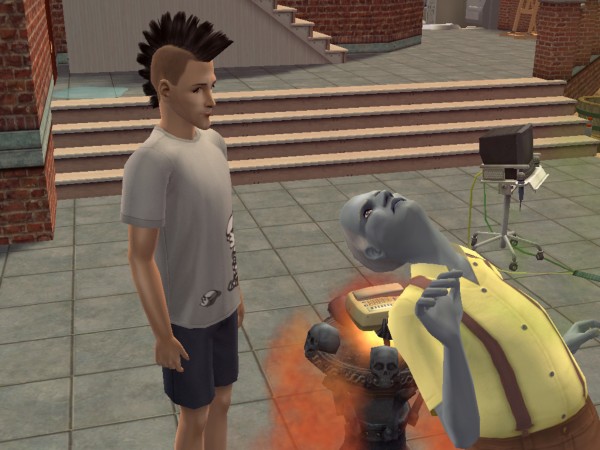 Nervous is occupied with taking some of his father's subjects to add to the bizarre occupants of the Beaker castle. First is the senile don of llama ranching himself...won't Bianca be pleased? 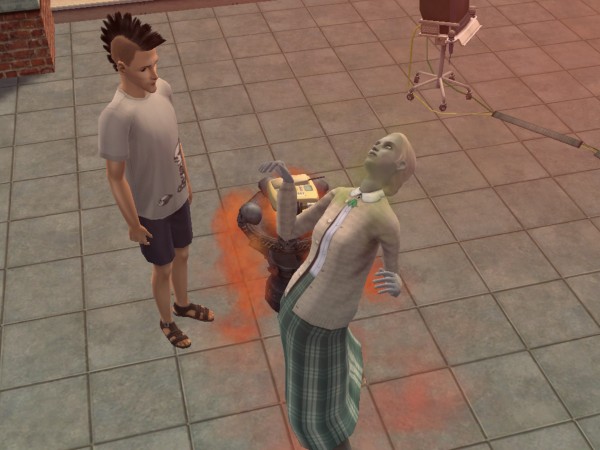 Next, some expert childcare is needed. Luckily, the Reaper knows just the Sim. 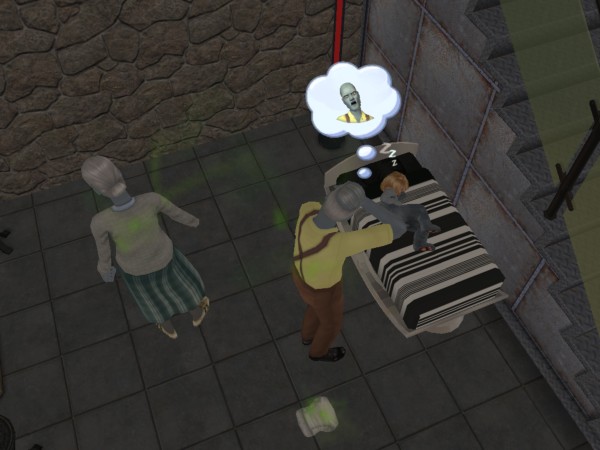 Both wound up fussing over Hera Beaker as they adjusted to their condition. A true Beaker, Hera was unconcerned. 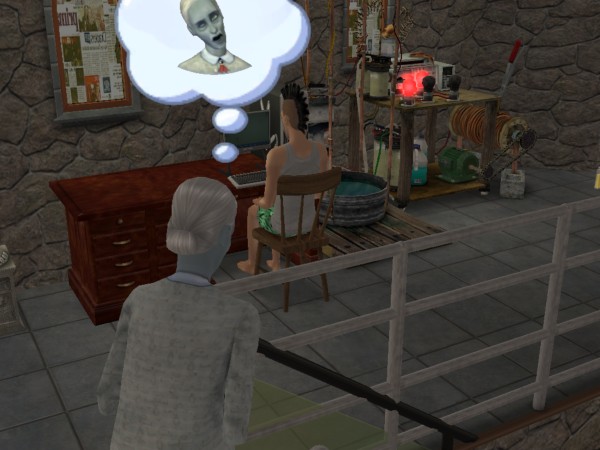 Nervous might want to watch his back as his creations get the hang of their adjusted bodies...there's some resentment toward him!
Please support the Sim National Labs [email protected] team!
Stuff I've made!
grammapat

When this moron couldn't get up..

passing out solved the problem.

of course when he woke up he peed himself.
Namaste... or "go"
StrangeTownChick 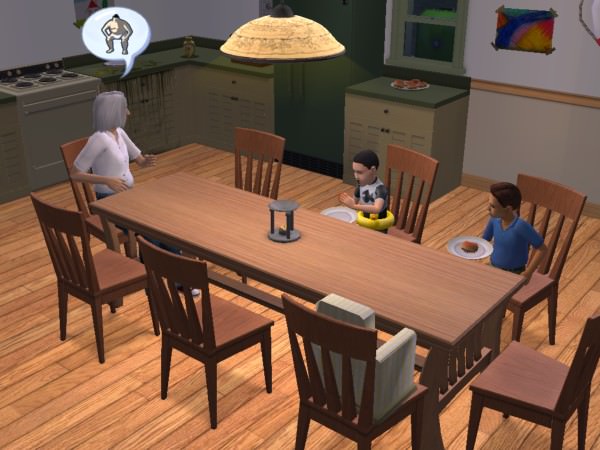 After Finnian leaves for college, Connor spends some time reconnecting with his young nephews (who I'd later find upstairs sound asleep in their grandparents' bed). 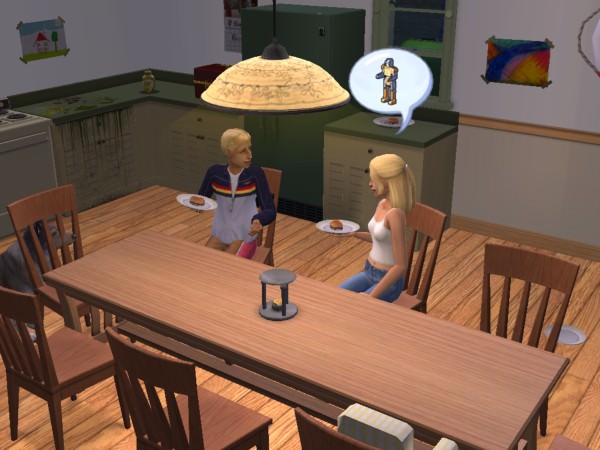 Later, Julia passionately goes on to Gabriel about her plans to be a roboticist. 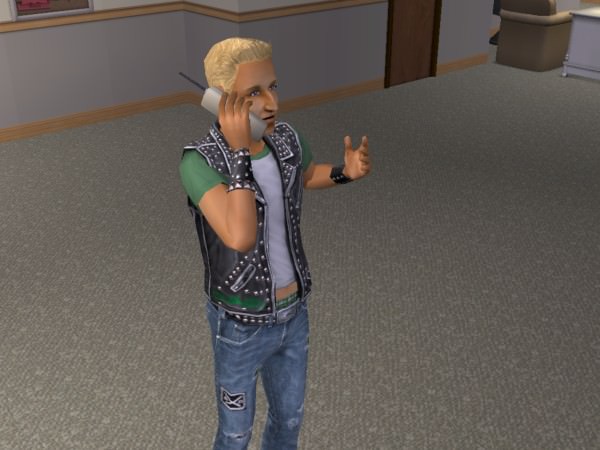 As soon as Finnian got to college, he hopped straight into the love tub left there by his dad. After making him get out to claim a dorm, the phone rang. It was his youngest cousin Michael! And what's more, after he hung up, he rolled wants to call his mom, dad, and little brother, and thus spent the entire night on the phone. 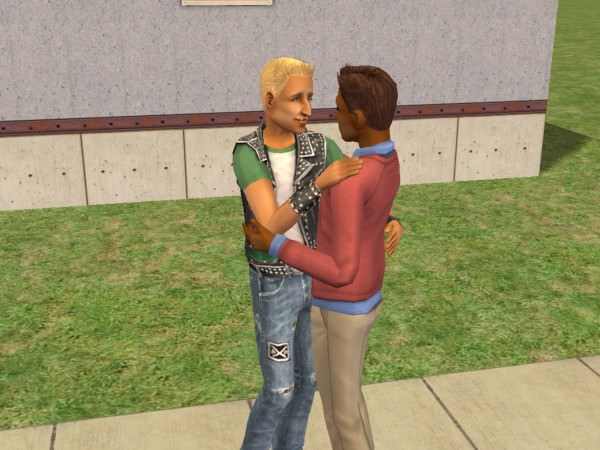 But it wasn't too long before he'd found himself a boyfriend. (Reed Tomyoy, who's been a dormie since Finny's parents, aunts, and uncles were in college.)
I've got one or two things on MTS, but most of my stuff is on my main site here:
http://simcessories.blogspot.com/
(Now recruiting budding creators.)
grammapat

Now Grampa Wiess, don't be telling them you used to be a sumo wrestler..
Namaste... or "go"
RoxEllen1965

I recently loaded a neighborhood that I hadn't played in awhile. Apparently one of the cashiers is a devout Jacoban.

I guess that's the trouble with making those things townie-friendly. Nice hat.
I no longer come over to MTS very often but if you would like to ask me a question then you can find me on tumblr or my own site tflc. TFLC has an archive of all my CC downloads.
I'm here on tumblr and my site, tflc
Back to top