How would I fix errors like this?
Sooo I still have this download from now-deleted toothfairyundermypillow. I assume they deleted the download link because the items had many problems and threw errors whenever you would try and place them with testingcheats on. Some of the items have already been converted by other simmers by now, but I've been holding onto this download bc I wanted to try and see if I could perhaps fix them myself. The errors that pop up looks like this: 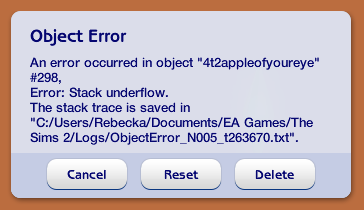 When I opened the file in SimPE it had many weird resources. I attached one of the problematic files (and the error log seen in the image), all files seem to throw the same error. How I would fix this? Or is it easier for me to just clone new objects and simply replace the gmdc and the GUID etc?

Edit: removed files.
You can find more of my downloads over at my tumblr: https://vegan-kaktus.tumblr.com/downloads
Advertisement
simmer22

Do you happen to know what this item is supposed to do?

If it doesn't have any spesific functions outside of being a deco item, you could just extract the mesh and texture, and then make a new clone of an actual wallhanging and fix it that way (Less chance of any problems hitching a ride with it, and you'd be able to make a better functioning wallhanging). That's what I'd do, anyway.

I'm not an expert (by any means) when it comes to BHAVs, but I can't find anything else than placement BHAVs and such (and they're in a resource called "SG: Init" which I've never seen before - usually it's called just Init or Function Init, so that's a bit strange). I'm guessing they probably did some trickery to make it behave more as a wallhanging, and there'smost likely something they did that's causing the file to fail. Why they'd clone the fruitbowl to make a wallhanging? No idea, but it does sound like a lot of extra work for no gain... :/

I'm guessing some of the other files could have similar problems. You happen to have that full file? I'm curious to see if that "SG: Init" is present in more files than just this one. That could potentially be the culprit.
My site - TS2 baby stuff - ToU

I have no idea tbh, I'm thinking the deco isn't supposed to do anything at all. Perhaps it's as simple as tfairy just cloning the files from the wrong "type" like you mentioned? I guess I'll clone from the right "thing" and just swap mesh etc :-) thank you for the answer!

Edit: sorry, I didn't see all of your message! Yes I have the full download, but there's a lot of files. If you want me to share it I can do that :-)
You can find more of my downloads over at my tumblr: https://vegan-kaktus.tumblr.com/downloads
HugeLunatic
Dancing Flamingo
staff: administrator

(I don't tinker a lot with doors/windows and other build items that use diagonals, which probably explains why I can't remember having seen the SG init resources).
My site - TS2 baby stuff - ToU

If you share the file I could probably tell you what they cloned it from. You may be able to just replace the bhav with different ones.
Life Stories | EA Sims 2 Store Items | EA Pre-Order Incentives | Pet Stories | Castaway Stories
Maxis Match | IKEA Extras | Holy Simoly Add-ons | Overrides and Defaults
4esf Archive | Holy Simoly Archive | Sims2Artists | tumblr
---- CEP-Extras List ----﻿
If you enjoy the content on s2a or GoS, consider donating to support hosting costs.
simmer22

It does look like there are a lot of strange things going on in that file, possibly not just the BHAVs (routing slots, and various other things - I'm not sure what can cause problems for a wallhanging-wannabe file). The item is cloned from a fruitbowl, but seems to have been partly (possibly wrongly) set to work as a wallhanging via the SG Init BHAV. The safest would probably be to remake the file (and any others with similar issues). You can most likely reuse the GUIDs, but make sure you remove all traces of the original objects before you put the fixed items in.
My site - TS2 baby stuff - ToU

Thank you both for replying! I think I'm just going to clone new objects, replace the meshes etc and re-use the guids :-)
You can find more of my downloads over at my tumblr: https://vegan-kaktus.tumblr.com/downloads
simmer22

Some people can probably make something completely different out of "any" file, but until you aquire that level of skill, it's probably best to keep it simple (if in doubt, that's usually what I tend to do...)
My site - TS2 baby stuff - ToU

Yes! That's what I'm planning on doing :-) thank you!
You can find more of my downloads over at my tumblr: https://vegan-kaktus.tumblr.com/downloads
Chris Hatch
Inventor
#11

Quote:
I don't know what SG stands for but all standard doors use it, (Function - Init x,x SG) where x,x is the tile.

There is no reason for wall-hangings not to be diagonal enabled, I have several that are. If you are interested in seeing one CJH_LCDadvertSign.zip (2.6 MB) contains two LCD advertising signs for commercial lots, a single tile one for §518 and a two tile one for §1,222. They are packaged together because they share recourses. Both are diagonal enabled and the large one (intended for outdoors) contains an lod90 mesh so the screen will also light up and animate in N'hood view.
Back to top