Quote:
Sorry for the late response and thank you for your help for the past days. I've recently added another outfit into the game and it looks good. I made sure to untick auto-smooth in the groups tab when I made the outfit and I understood what you meant about how auto-smooth messes things up. I do have another question though. One of the models I am trying to import into the game has a total of four groups in milkshape 3d. When using the auto-assign bones option for WSO objects in the meshtoolkit (listed here: https://modthesims.info/d/481950/me...2-20-2018.html), I am unable to use it as my model has four groups. The meshtoolkit only seems to work when I have a model with only one group titled "group_base". Is there a way to make it work with more than one group and if so, what would these groups be named as?
JESSE!
simmer22

I don't think I've ever tried that before, so I don't know. I don't use the auto tools a whole lot, so I haven't played around much with them.

You could do the groups individually (probably the best, because then they would be a bit easier to deal with), or you could combine them into one group temporarily (depends on how difficult they are to separate later).
My site - TS2 baby stuff - ToU

Quote:
I forgot about the possibility of doing groups individually. I might do this. My next model I'm trying to import is a bit ridiculous in how detailed it is and milkshape 3d seems to be having a lot of trouble importing it as a whole in smd format. Whenever I import it in smd format all it does is hang in "not responding" and refuses to import. But milkshape has no trouble with importing it as a TSRW object or .OBJ file (imports instantly). If I was to do it seperately, this wouldn't be an issue and is probably way easier as you said
JESSE!
simmer22

I think Milkshape starts having troubles with CAS meshes when they reach 30-60K or higher, and ingame you need to have shaders enabled for CAS meshes over 30K to show (they'll show invisible or partly invisible if shaders aren't turned on). Just so you're aware. It could also have something to do with the SMD format (not meant for high-poly meshes?).

I haven't had the same problem with OBJs, though Milkshape does tend to struggle at a certain point when the polycount gets too high. If the mesh starts "disappearing" when you load it in, or never appears, the polycount is most likely too high for Milkshape, especially with OBJs.
My site - TS2 baby stuff - ToU

Quote:
There isn't much I can do with the 30K higher line (and I know it sounds a bit crazy since this is an old game and I'm trying to import modern high poly models into it, but I wanna see what I can do

), I can't really cut the mesh down or anything as it would remove important things I need. I think importing and exporting the groups seperatly as TSRW objects is a really good idea. However my concern with this is considering that each time my new mesh's groups are auto-assigned to joints each time, how would I import them seperatly in milkshape on the sims 2 body? the tutorial requests that it is done in SMD format, but if I am importing seperate groups, doesn't it mean I'm importing more skeletons? or will milkshape recognise it as one skeleton and assign each group to their corresponding joints on import?
JESSE!
simmer22

It's easy to get around the extra skeletons. Once you have all the meshes you need and have them ready for further fixing (you'll want to make sure they're separately fixed), you make sure you've fixed the Auskel joint and comments (these need to be proper, or the bone assignments WILL NOT be transfered properly!) and all that, then you export them as Unimesh files, as if you were going to export them into SimPE.

Then you export a mesh from SimPE with the right age/gender and outfit type (naked body/top/bottom is usually a good idea - they're the easiest to remember the names of). and Import this to Milkshape. Then you import each fixed mesh from the above step into this file, but click NO to the questions about importing skeletons or morphs. This should leave you with just one skeleton. Go through the joints list and make sure there's just one set of joints. There should just be one "head" bone, for instance, and the first joint should be named "auskel".

From there you can make further adjustments, if needed. You may want to save between each import, in case you hit Milkshape's CAS limit at some point.
My site - TS2 baby stuff - ToU

Quote:
I'll try this and get back to you as soon as possible
JESSE!
mousedroidz21

I followed what you said and the models came out well in the game (apart from the auto-assigned joints which obviously require adjustments to them :D). I think this thread has finally met its conclusion as you've been able to help me and teach me how to mesh in this game, especially with the technical bits such as using multiple groups for a mesh (like we did today). Anyway, here is my next model I ported in today and it was a very long process as it had 4 groups, was very high poly and took a lot of adjustmenets to finally get in-game.

The samurai armour itself is from the game Sekiro Shadows die twice and was ported to source by a group of amazing guys over on steam workshop for SFM: https://steamcommunity.com/sharedfi.../?id=2024355112 I asked the original uploader in the comments section if its alright if I upload these and he said its fine as long as I give credit. I think I'll release these ones in the near future depending on whether I am happy with how they look or not rather than the original samurai model I ported from before.

The model isn't 100% perfect but I think it looks better than the other samurai armor: 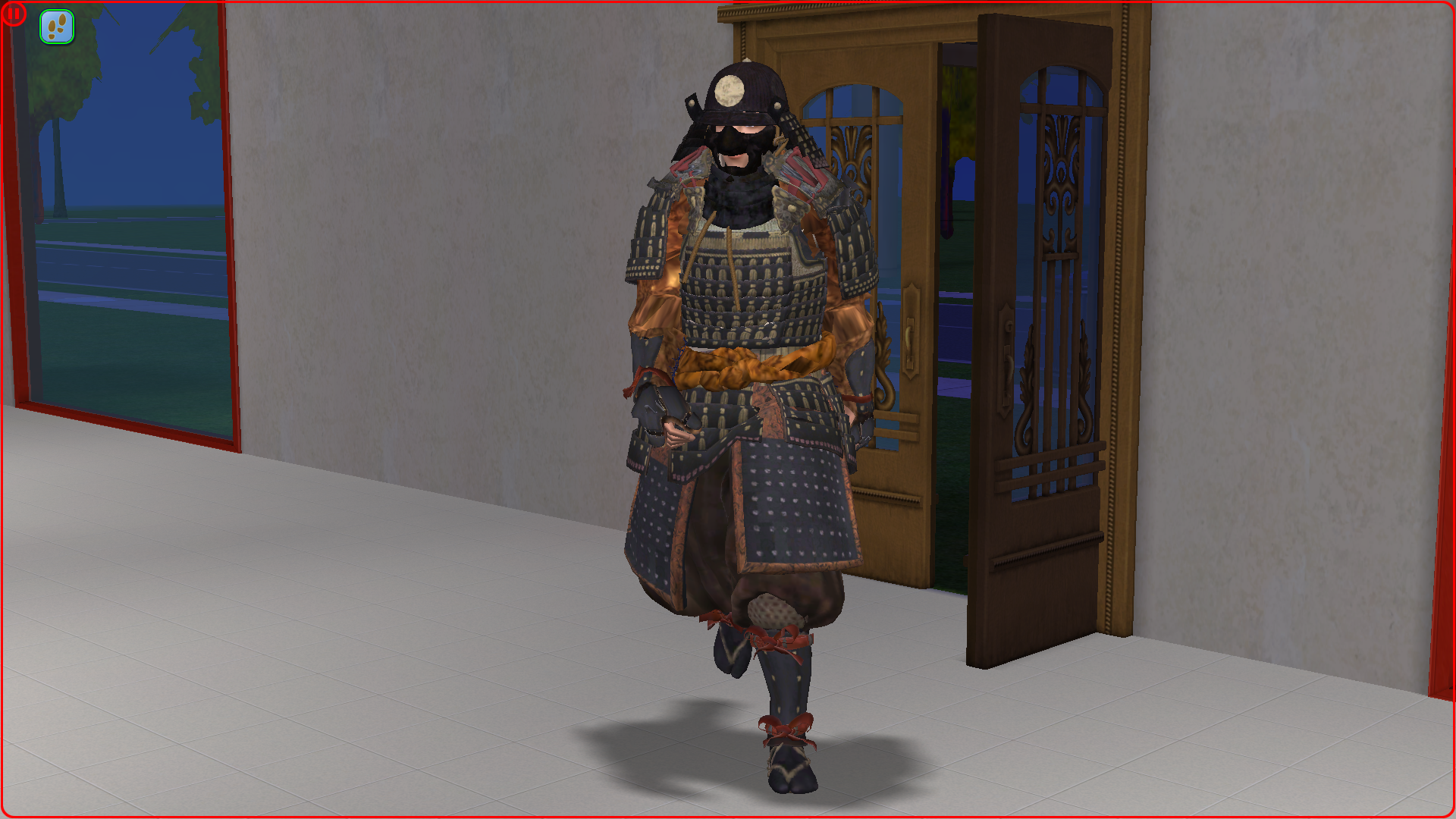 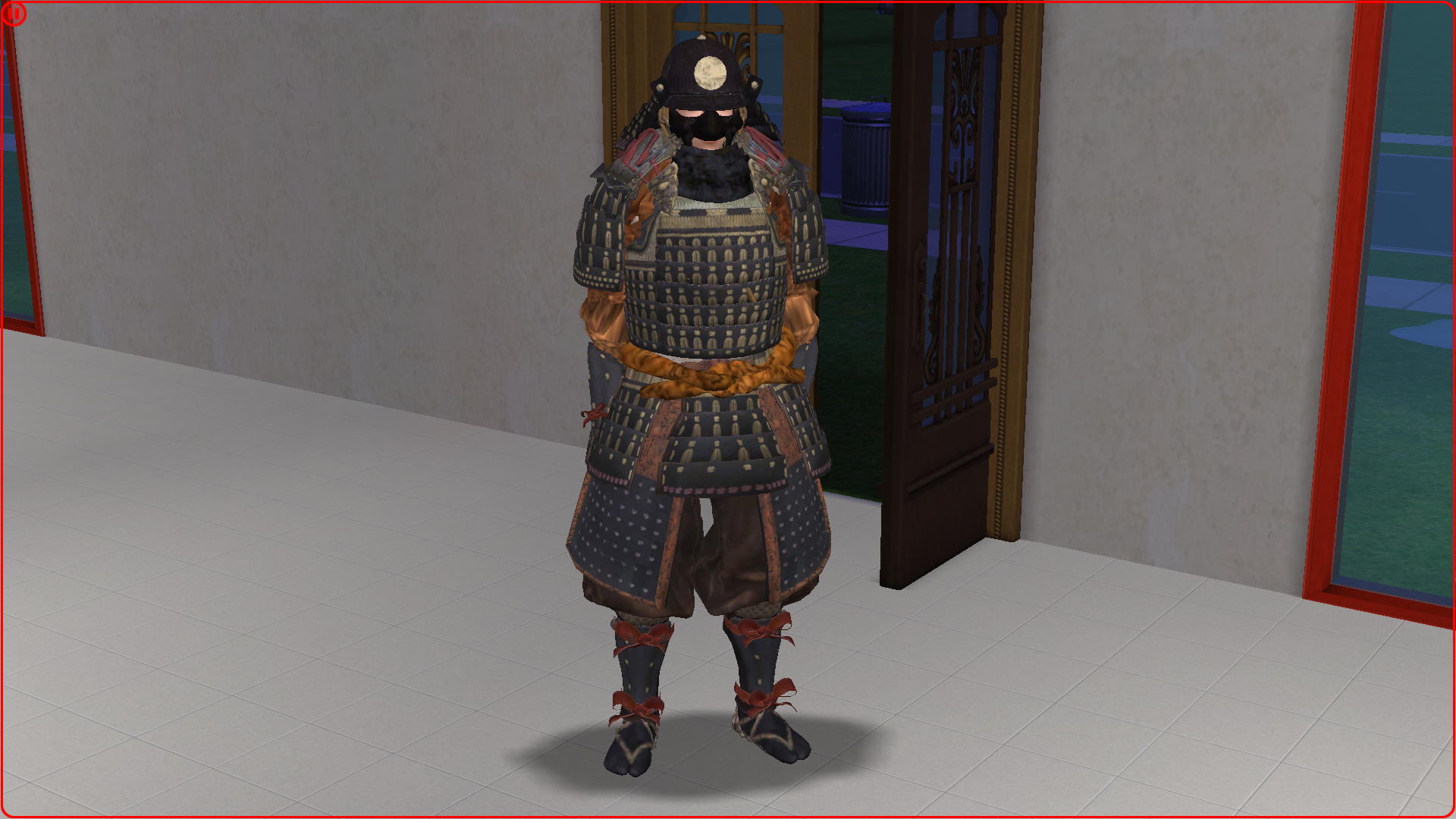 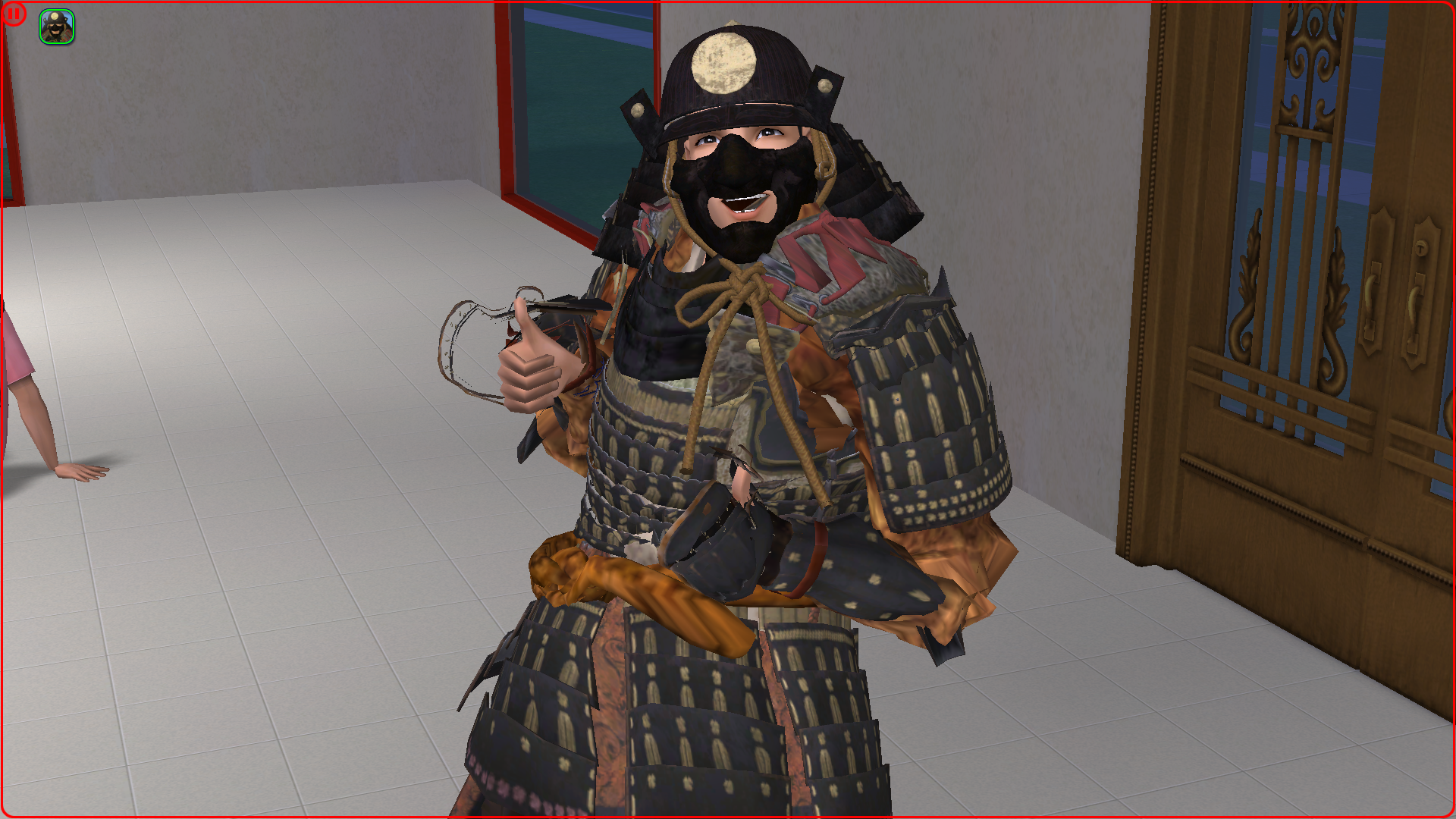 (may consider removing the gloves because this just seems very off) 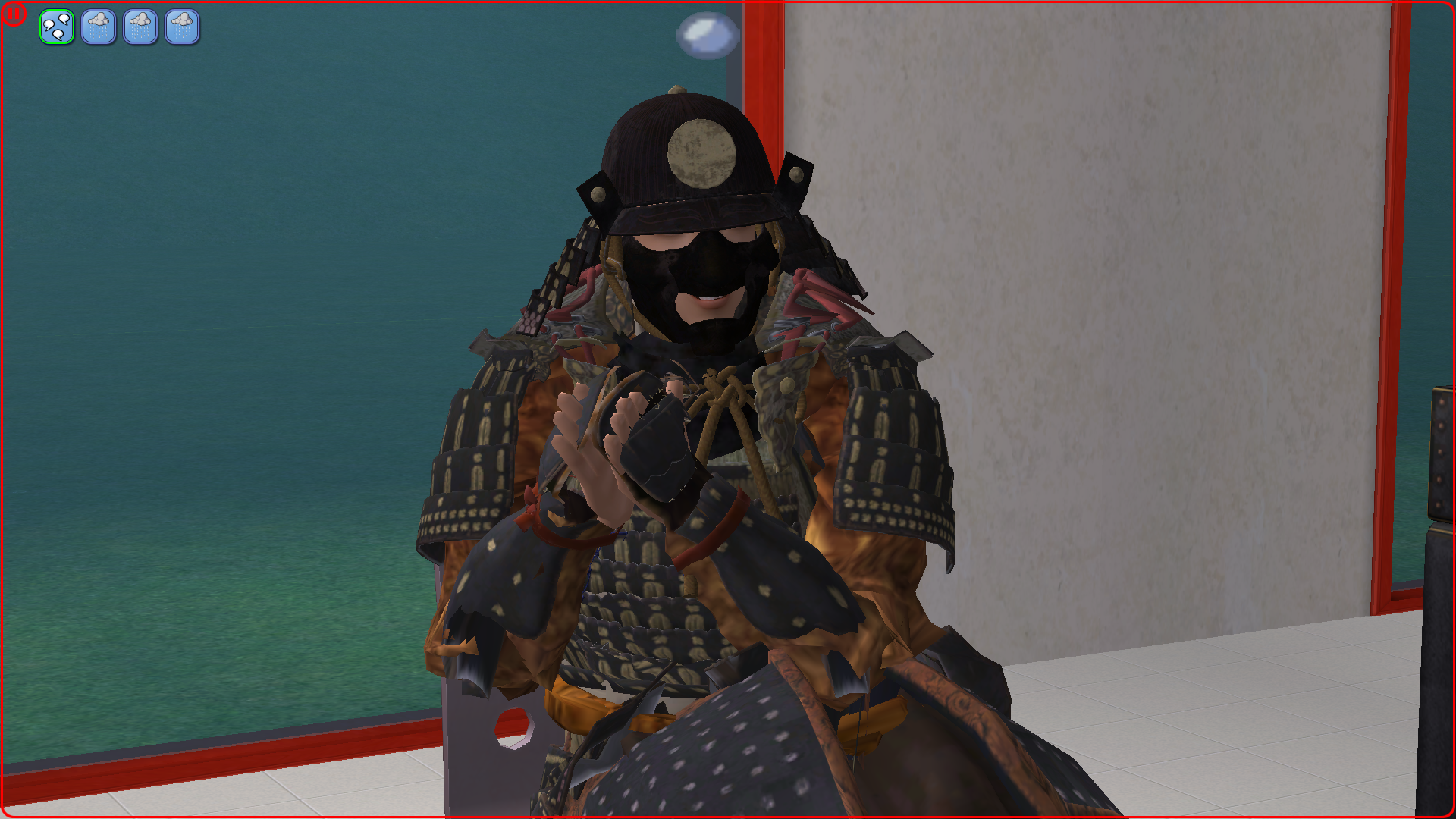 and of course, the sitting on the floor animation looks bad on it but I think I can make adjustments in milkshape to make this look better: 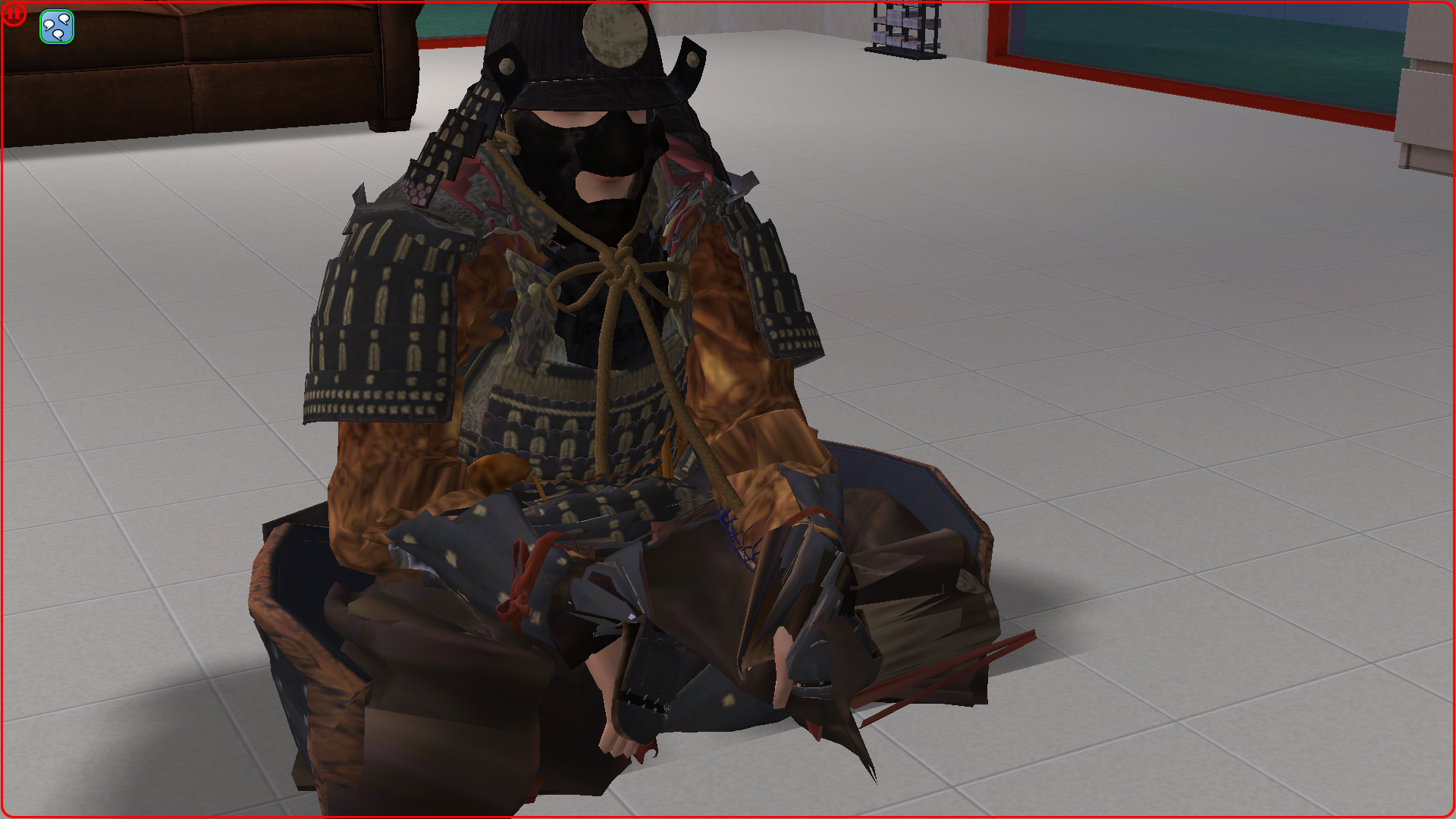 Anyway I think this has been a great lesson to learn to port to the sims 2, I thank you for all your genirosity to help me port this to the sims 2. I do have just a few more questions however. Is there anyway to improve how milkshape 3d imports smds? like I said before, this one was having a lot of trouble importing and I'd have to wait 4-7 mins for each group to import sometimes if it was exported as an smd. I tried setting the priority for milkshape to "above normal" in task manager to see if that would change much but it didn't :L

Also, as you can see in my images, the stance of the outfit is different to the default sims stance. This was because I decided to delete the legs rather than try to morph the outfit on to them, I just thought this was a better move as the arms were really difficult to get to T-pose (and in some images may seem a little awkward). This isn't too much of a big deal is it? say if I was to upload this, would those who download it have an issue with it or not?

Other than that, thanks so much for your help! I think I may set up a tumblr website just dedicated to porting cool armors into the sims 2
JESSE!
simmer22

For the SMDs, I'm probably not the right person to ask, as I don't do a lot of conversions. You may want to ask someone who does clothing conversions from other games or 4t2/3t2 on a regular basis (Deedee, Rented-Space (serenity_fall), MDP, possibly a few others.

For fixing bone assignments, you may want to take a look here (not sure if I've linked this before) - it's the same method for any joints.
https://serenity-fall.dreamwidth.org/1813.html

If the auto tools don't give me a good result, or if I have difficult areas (particularly on toddler and baby outfits, or on some accessories that cover the chest/back) I sometimes import an EAxis mesh of roughly the same size and shape (NOT the skeleton or morphs!), move it a little out of the way, and then copy over joint assignments from it to my mesh. it's one-by-one in some areas, so it takes a lot of time and testing, but the result usually turns out okay.
My site - TS2 baby stuff - ToU

Quote:
Thanks. And again, thank you for helping me import the models into the sims 2. If I do upload these ports at some point, I'll also give you credit for the help

I have an issue with an accessory I just created. After changing the frame TXMTs to SimStandardmaterial, the accessory appears completely black with a texture mapping error. So I decided to change the lens TXMTs to SimStandardMaterial as well and change their alpha mode to none, but this didn't do anything. This is how my helmet appears both in bodyshop and in-game: 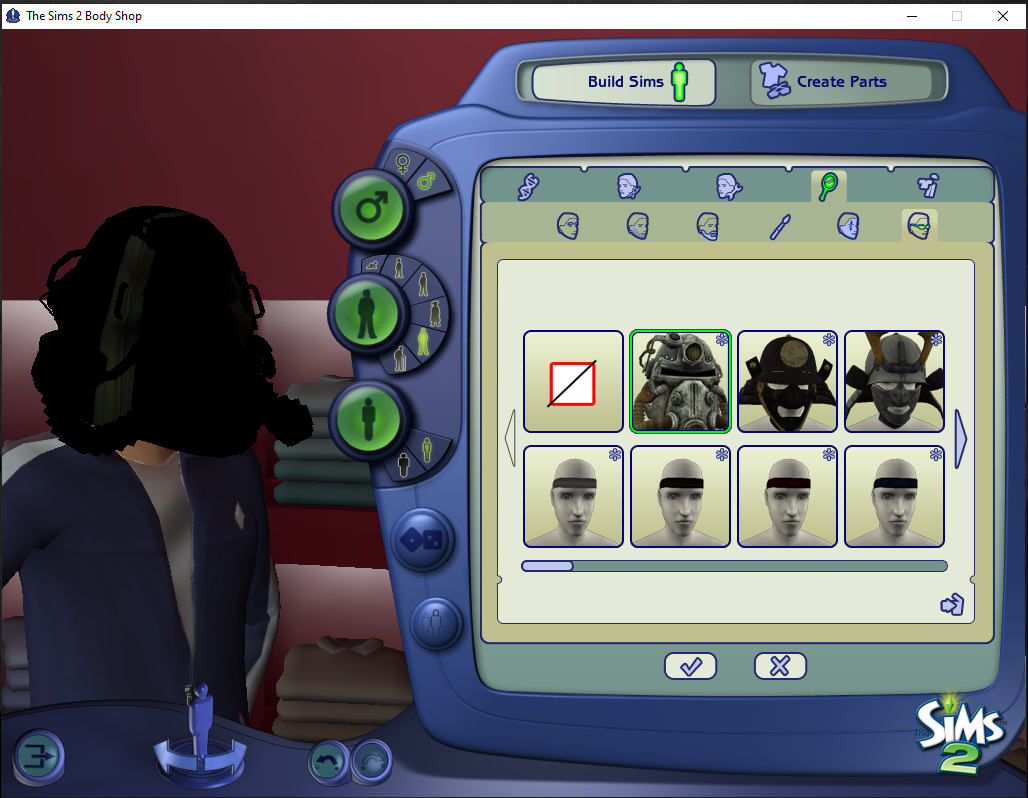 Setting the TXMTs back to Standardmaterial fixes the issue, but the helmet has the weird transparency error like you said which is present in those who own pets and upwards
JESSE!
simmer22

Can you upload the files (recolor+mesh)?
The thumbnail looks fine, so I'm guessing the problem is somewhere else. Also, the lens isn't showing anyway, so changing that TXMT won't cause any changes to the look of the accessory.

Oh, and I just remembered - did you check the UVmap? Did you make sure it's within the "texture square"? If it's shifted up/down or to the sides, the item won't be able to take on the texture, and will show with a "borked" texture. It should be a simple fix - shift the texture one whole square so it's inside the texture square, and export from Milkshape. If this is the case, shifting the shader type can sometimes cause the file to switch from tiling the texture to only recognizing what's within the "texture square" (often an issue with CAS items, not so much with objects. Especially if you extract something as an OBJ mesh from SimPE and want to use it as a CAS item, because SimPE loves to do the UV-shift on OBJ items).
My site - TS2 baby stuff - ToU

Quote:
I haven't checked the UV map and I'm also unsure of what you mean by "texture square" so this is probably the issue. Where can I find this setting? I'll attach my files to this post

Turned out to be an UV problem. I fixed it for you (there were some additional issues that made the fix a bit tricky) and added some pictures that hopefully explains what I did, and what I mean by texture square: https://simfileshare.net/download/1974584/

Not all meshing programs have a texture square for the UVmapping tool as clear as it is in Milkshape, but at least it's very visible there (there's probably an actual name for it, but there's a lot of meshing/UVmapping terminology and I've never made it a goal to learn all of it).
My site - TS2 baby stuff - ToU

Quote:
Thank you so much! now it works perfectly. If I upload this in the future I'll be sure to give you credit

JESSE!
Back to top