The Last of Us: Part II Leaks

The Last of Us: Part II Leaks
What I've read about it completely made me no longer excited for this game and I will not buy it. Though, I can't wait to see YouTuber's let's plays of it and hear their opinions. I played TLOU and it's a really good game. I love the cinematic scenes, the characterizations, plot, etc. However, from what I read and saw concerning the spoilers for the sequel has gone in a completely different direction especially with the way the plot turns out and what happens to the main characters. I had my suspicions when this trailer released but decided to give this game a chance anyway at the time.
https://www.youtube.com/watch?v=pMW_sycSs30
It's such a shame because the first game is one of the games that is on my most enjoyable video games list. Now Ellie or any video game character, etc. being lesbian or whatever sexual orientation doesn't bother me at all despite my beliefs. However, when writers focus on sexual orientation which revolves around the whole plot, for me, usually is a telltale sign the story isn't going to be good. Or when the plot begins to incorporate sexual orientation out of no where like Avatar: The Legend of Korra. But then again, TLOK began to bore me when they started focusing too much on the love triangle between Korra, Mako and Asami. Or the video game Gone Home seemed so confused as to what the plot wanted to be about whether it was a mystery horror, occult horror, or just another sexual orientation plot line which instead of being honest about the story was just hidden in disguise.

Any TLOU fans? If you saw the leaks what is your opinion?
Because I'm Fragile...but I'm not "that" fragile.
Advertisement
HarVee

Never been much of a fan. Thought the game was too slow paced and everything felt too scripted. Looks like it only got worse for the second game.
Help contribue to a MTS Sims playlist on Spotify and listen to songs that remind us of The Sims.
Deshong

It's a shame because I really thought Part II would have been a continuation of what made the first game so good. In any case, I am glad someone leaked it because I would have been really upset to play through that and waste money on something I wouldn't enjoy. At least there's Cyberpunk 2077.
Because I'm Fragile...but I'm not "that" fragile.
HubertYoung
Test Subject
#4

Expectation
Quote:
If you are looking forward to the continuation of The Last of Us, then it is probably time to hide in the information bunker: commercials with key plot spoilers Part II somehow penetrated the Network: https://www.inverse.com/gaming/last-of-us-2-spoilers-games-here. They say that this is the fault of an employee of some Sony unit who had access to the internal builds of the game. Now there are many alternatives to this game. The release should be on May 29, so we wait and do not draw conclusions ahead of schedule. I hope the release will not be postponed due to logistic problems.
Deshong

There are so many fans who found out the hard way and want to return the game and I hear GameStop and perhaps some other places are not accepting trade-ins and/or returns. What a despicable move, not to mention lying when talking about how great the game is when the majority of fans absolutely feel the opposite and betrayed. Just look at Metacritic's user score. https://www.metacritic.com/game/pla...t-of-us-part-ii

The user score was much lower than that but I wouldn't be a bit surprised if some are going around trying to change the narrative. Hence, 10 rated reviews just saying great game and everyone else can just shut up. Yeah, that's an wholesome review right there. Watch some of the Let's Players who were invested in the previous game and characters and see their reactions playing blind. Pewdiepie's reaction sums up how most feel. And it's funny how the official trailer for TLOU2 disables comments and likes/dislikes. I'm curious how fans will treat Naughty Dog in the future.

This game's story is so bad and doesn't make any sense that valid negative reviews are no longer allowed to be posted on Metacritic...only positive reviews which is why the score is slowly climbing up. Well, you can't change people minds and this is only one more thing that will likely reflect, "Everyone will remember that."
https://www.youtube.com/watch?v=8zSNBV4Wj_A 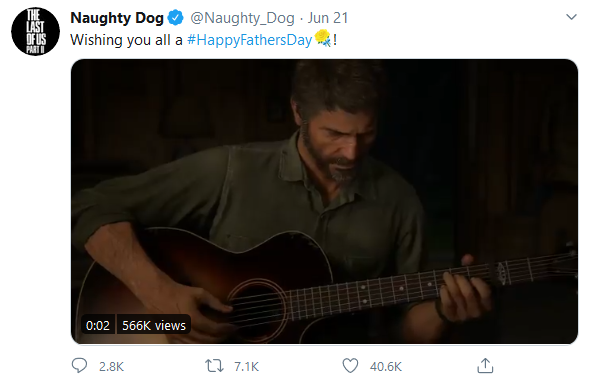 Because I'm Fragile...but I'm not "that" fragile.
samarmas
Test Subject
#6

Playing the game I realized you need to watch this trailer to understand what's going on at the start.
geometry dash
Back to top