EDIT:
Also I loved this line:
Maxis didn't say no to threesomes, just, they didn't have time to make the animations and scripts

Well, apparently I'm a sadist. I guess I could argue that I don't usually cause *physical* pain for my sims, but the amount of drama I create on a regular basis can definitely be called "traumatic", so... I'm just gonna... go into the corner...
AndrewGloria

In another thread simsample told me about these drainpipes (roof gutters and downpipes) for Sims 2 buildings. Years ago, in a previous life, I was a model railway enthusiast, and all the building kits, especially the German plastic ones, came with little gutters and downpipes. Even house kits for the tiny 1:220 scale Z Gauge which I used latterly had them. So I was kind of surprised not to find drainpipes on Sims 2 houses. Why didn't Maxis think of them?

Anyway now that I know about these ones by Frillen I'm going to start putting them on my Sims 'houses. Frillen did the gutters by making them as fences. Why didn't Maxis think of that?

I've also found two rather attractive hairs by Sizz. When I say "two" I mean the male and female versions of the "Usa" hair. I don't know how I never spotted them before. I've been using Sizz's "Hanui" hair since the very beginning of my game. (It's Julian's hair.) The "Usa" hair maybe isn't quite as good as the "Hanui", but it comes in two lengths for both sexes, and I rather like it. btw I like the pictures of the Sims that Sizz uses toillustrate his/her hairs. I'd love to know the backstory of those Sims.

Of course all these have been around for years, and maybe everybody else knows about them. But they're all new to me!
All Sims are beautiful -- even the ugly ones.
My Simblr ~~ My LJ
Sims' lives matter!
The Veronaville kids are alright.
Orphalesion

I don't really like the gender stereotyping he does.
And as to the "4 players".... I'm neither of them.
Avatar by MasterRed
Taking an extended break from Sims stuff. Might be around, might not.
simsample


Quote:
Do you mean the demographic stuff they got from Sims 1? That was actual information from the game, that just happened to confirm some stereotypes. Sims 2 is a broader game, so would probably give different results. 'Modder' would have to be one; there are people who hardly play but just create mods. I am definitely a builder though- workd builder.

Maybe that's saying more about the actual women involved, not necessarily a stereotype. His following comment was pretty broad. 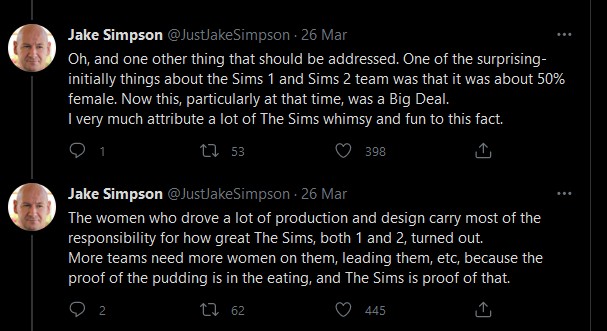 Anyway, now we know that Lucy Bradshaw was the one who didn't think hot-tub threesomes were worth the coding time, how's that for fun and whimsy?

I do not think of fun and Whimsy and Lucy Bradshaw together in the same thought.

"I dream of a better tomorrow, where chickens can cross the road and not be questioned about their motives." - Unknown
~Call me Jo~
Careers and businesses for sims
What I Love About Toddlers
didyouevenmakeasound

Quote:
Today I learned that my auntie shares a name with someone who worked on TS2? Upon googling it, that seems to be a common name, apparently, (so I don't think I'm in any danger of being doxxed lmao) but my god, that surprised me then. Thought I'd have to go and ask my Auntie Lucy a very stern set of questions...
You can call me Diddy (or Eve, if you want to go by my real name) :)
My Simblr is simping-simmer. Come and join me there for a chat!
You can also find me on the MTS or PBK Discord servers under the name 'Evenfall'.
Want to know the latest news in Carregffynon? Click here!
simsample

Not gonna lie, hot tub three ways, as well as poly-amorous relationships for Romance Sims, would have been awesome. Can you imagine if they gave that its own little movie, like wih regular woohoo? hahahah

The Romancemod takes care of the poly-amorous relationships, but hot-tub threesomes still don't exist.
Avatar by MasterRed
Taking an extended break from Sims stuff. Might be around, might not.
FranH

Remember, Lucy Bradshaw was the main developer behind Sims 3 which did not have babies at the start. She obviously does not like sex-and especially hottubs or the menage a trois.
Receptacle Refugee & Resident Polar Bear
"Get out of my way, young'un, I'm a ninja!"
My downloads of various stuff: https://www.mediafire.com/#myfiles (including funerals, here: https://www.mediafire.com/file/e6tj...albits.zip/file)
sugoisama

Quote:
I'm sorry, the sims 3 didn't have *what* at the start
omglo
Alchemist

Do you mean Sims 4 and toddlers?

This little section on the decision to make custom content creation inaccessible to most was interesting (and annoying. I've spent what probably adds up to months of my life trying to force some semi-decent animations into this game).

"BUT, they weren't about to put the content creation tools we used out there, because then other people could create content as good as the expansion packs that EA produced, which was a major source of $. So what they settled on was a graduating scale of 'easy to produce' content that users could create. So, reskinning an existing object was easy. Creating animations for that object wasn't too hard, assuming you knew the names of the animations that the object required..

... and certain bones that were required so the Sim could stand appropriately infront of the object, and then grasp it, if need be. Adding Sim animations was nigh on impossible, and there was no way that EA was going to allow people to create their own scripts. Both from a "This takes $ away from us" and also from a "We always want this game to work" point of view. Allowing users to create scripts invites scripts that crash or are buggy or drag performance down.

EA wasn't about to take money out of their own mouths, so this and the object packaging system was never described publicly. Of course we inside knew this would be reverse engineered within weeks of release, but whatever. Gotta make the suits happy. One of the biggest PIA was releasing the sim builder tool early, about 2 months before the main game was released. It was a good marketing and business idea, but from a tech point of view, it was incredibly limiting. We literally could make no changes to the Sims definition at all, once that tool was out. Couldn't fix anything or add anything. It was quite limiting, although, like I said, a great way to boost interest in the game."
Tumblr

Quote:
Nhood building is the best thing since fried bananas. Weird looking on the outside, good tasting on the inside!
Because the earth is standing still, and the truth becomes a lie
A choice profound is bittersweet, no one hears Cassandra Goth cry

Doesn't look like it's compatible with Puppies/Toddlers use Stairs at the moment, but I don't even care. This is something that should have been implemented from the base game; finally a reason to use straight stairs again!

"May the sunlight find you, thy days be long, thy winters kind, thy roots be strong." -Grand Oak Tree, DAO

I'm a maximizer too. Been trying to kinda avoid that since I want to make a sorta real-ish setting... as real as a space colony can be, that is... so I start putting limits on things like selling, and of course the aspiration rewards. Thing is though, I might give certain Sims drinks from the Elixir of Life just to give them variety in lifespan and of course give them more years or fewer based on their lifestyles. Still, even lifestyles don't always guarantee long lives, as some super-fit runners would attest to if they hadn't keeled over suddenly. *cue Brew theme*
My Sims 2 Blog - info and stories|My SimCity Song | My Budgies

No more Google security warning and the spam is getting deleted! Speaking of spam, you now need to register in order to add a new entry, but I'm okay with that if it means getting one of my favorite databases back. And if anyone has some free time and wants to help fight spam/upkeep the database, check the "Leave a comment" page.
"May the sunlight find you, thy days be long, thy winters kind, thy roots be strong." -Grand Oak Tree, DAO

A TS2 ruleset for the Decades Challenge...in Portuguese. Looks like something to build off of!
Please support the Sim National Labs [email protected] team!
Stuff I've made!
kewpie

I like the idea of bin families. I want to add them in my hoods that get too inbred and need new blood. BUT I HATE how the bin families “escape” and end up in carpools, and come home from school with your playables.

So I got a bunch of clean neighborhood templates that got rid of those folk for good! But I still wanted to be able to add them in the hoods. It turns out someone has extracted them!! Now you can download each bin family individually!!

And it gets better. You can also download families from other premade hoods, without having to create an Uberhood. Think if it: Nina and Dina go on a road trip, get lost and wind up in Strangetown.

But wait, there’s more! All the townies, downtownies, garden club, apartment life social groups. So you can have Goopy and Sandy Bruty can terrorize Veronaville!! From now on, when I run low on townies, I’m going to download some of these guys instead of making new random ones.

There are also clean safe versions of premade dead sims. I don’t know what I’d do with them.. it’s not like resurrection — they’re just ready to go live in your hoods as if they never died. Not my thing.

Sorry but I just love this. I can’t wait to need new blood in a town.
Sims2Christain

all the townies you say... at last my uberhood will be (closer to being) complete!
Neverwinter_Knight77
Field Researcher
#2423

Quote:
I often get tempted to delete the bin families. Especially since I play multiple neighborhoods and don't like seeing duplicate Sims. But then I remember the corruption thing.
sugoisama

Quote:
Meetme also extracted them, but as subhoods you can add and delete, so they're families instead of inhabited lots - which is a lot safer to my knowledge, but what do I know. Then again theirs is grouped by EP, so I can't really have just the Ottomas family and not the Ramaswami family...
simsample

Quote:
Thanks for the link- I am ridiculously pleased about this!