@Noa_4ever PM me if you need help to post pictures!

Boris looks annoyed about something... 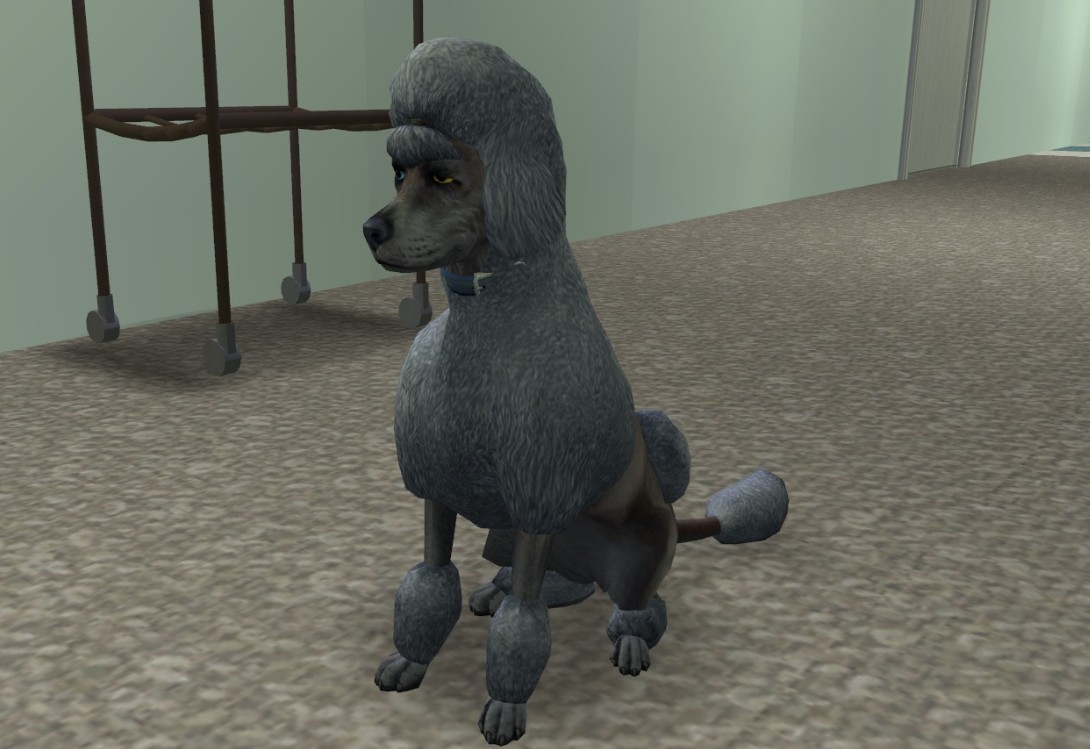 He is very small! 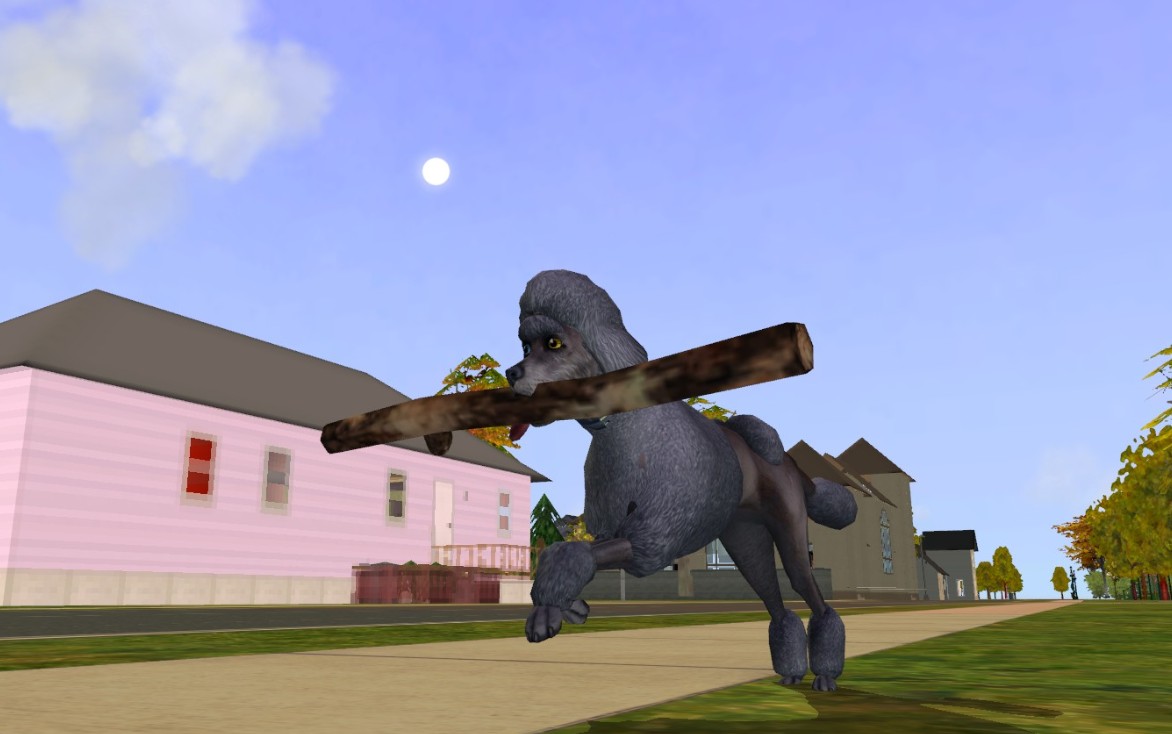 Or perhaps the props are just very large? 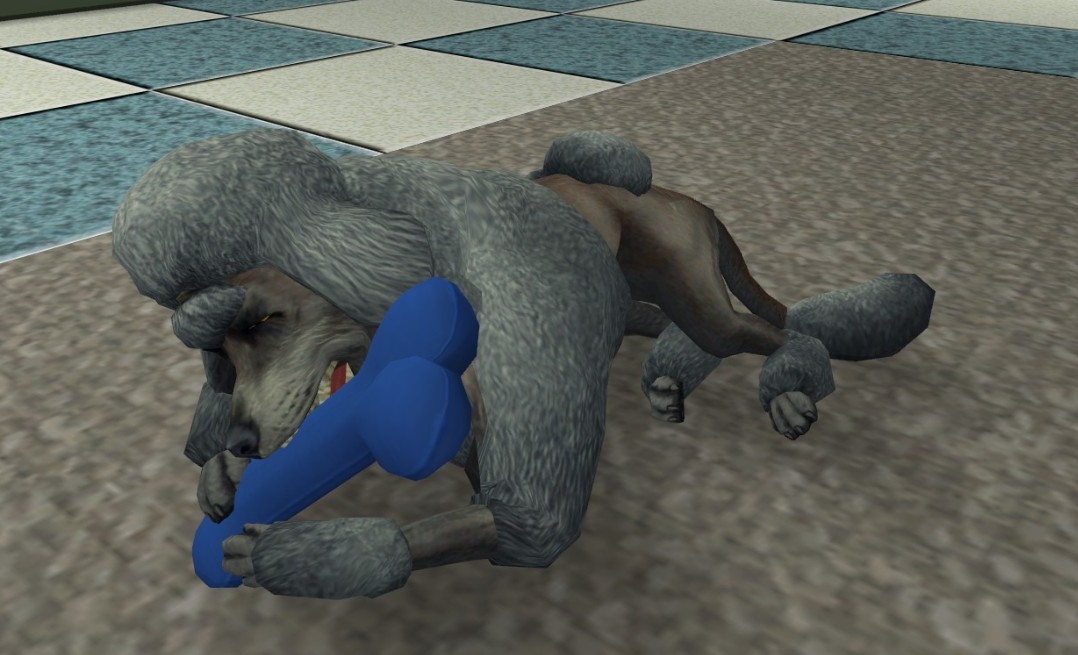 1, 2. Sam Whitt tries to befriend the "other" Sam in the mirror (and he made me sing Michael Jackson's "Man in the Mirror" in my head for hours

4. I had no idea that cc pet beds can become so filthy, the flies shocked me even more...
5. Roscoe Flores "sings along" with the stereo, very happy after his bed got cleaned

Pets is one of those few things Maxis did right; the animations for teaching "play dead" are cute
Namaste... or "go"
CASnarl
Instructor
DELETED POST
22nd Feb 2021 at 3:42 AM 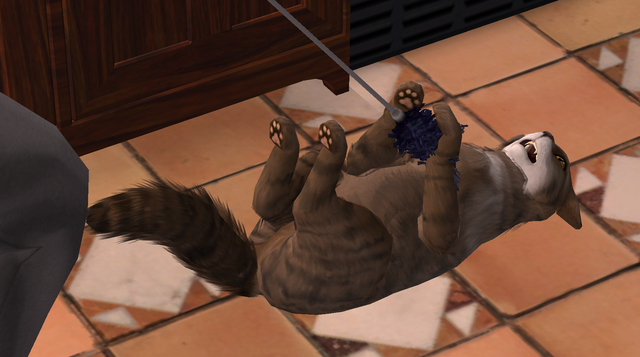 Ronroneo from the adoption bin, who is now a Monty. The realism in this game amazes me sometimes. My cats both play exactly like that all the time.
simsample

My neighbourhood has stray hyenas, I am rather fond of them! 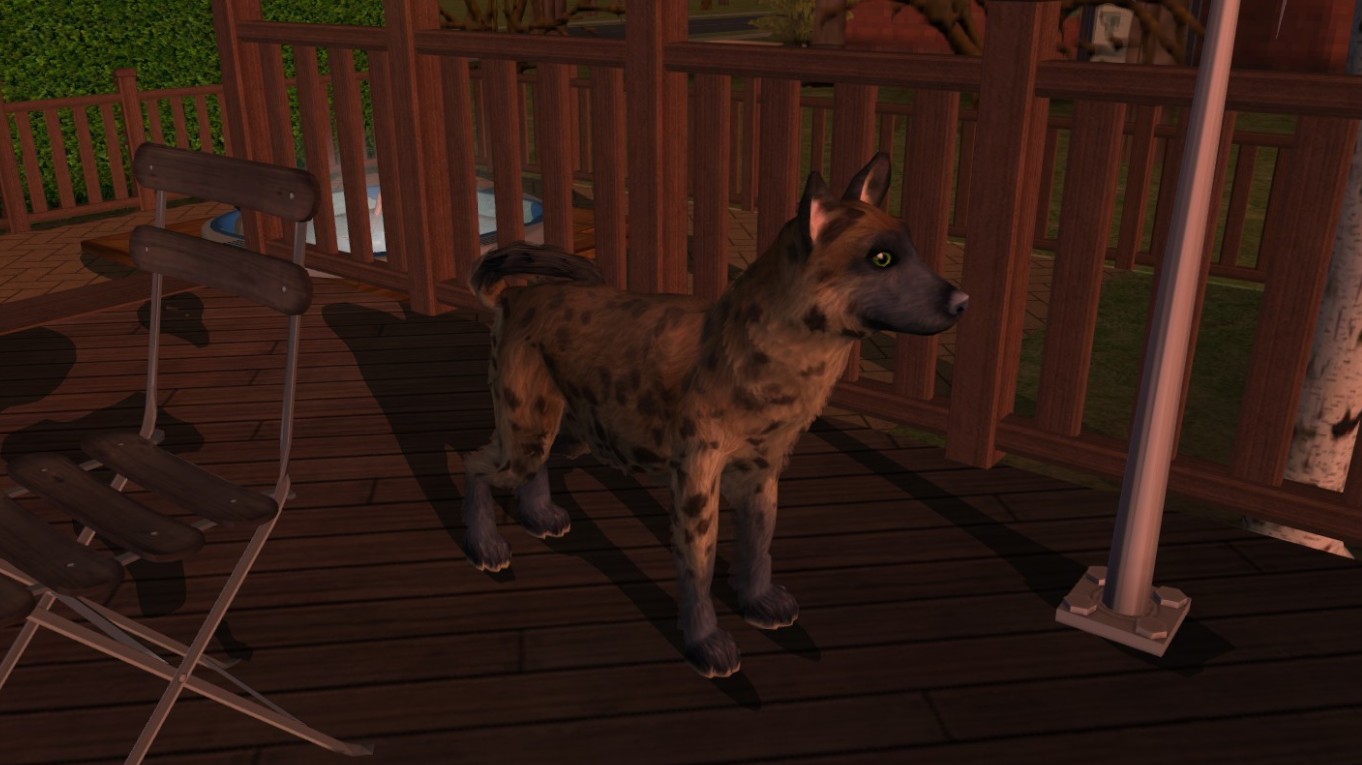 My sim adopted a cat from the adoption pool, bred by one of my founders who had the LTW to breed lots of kittens! 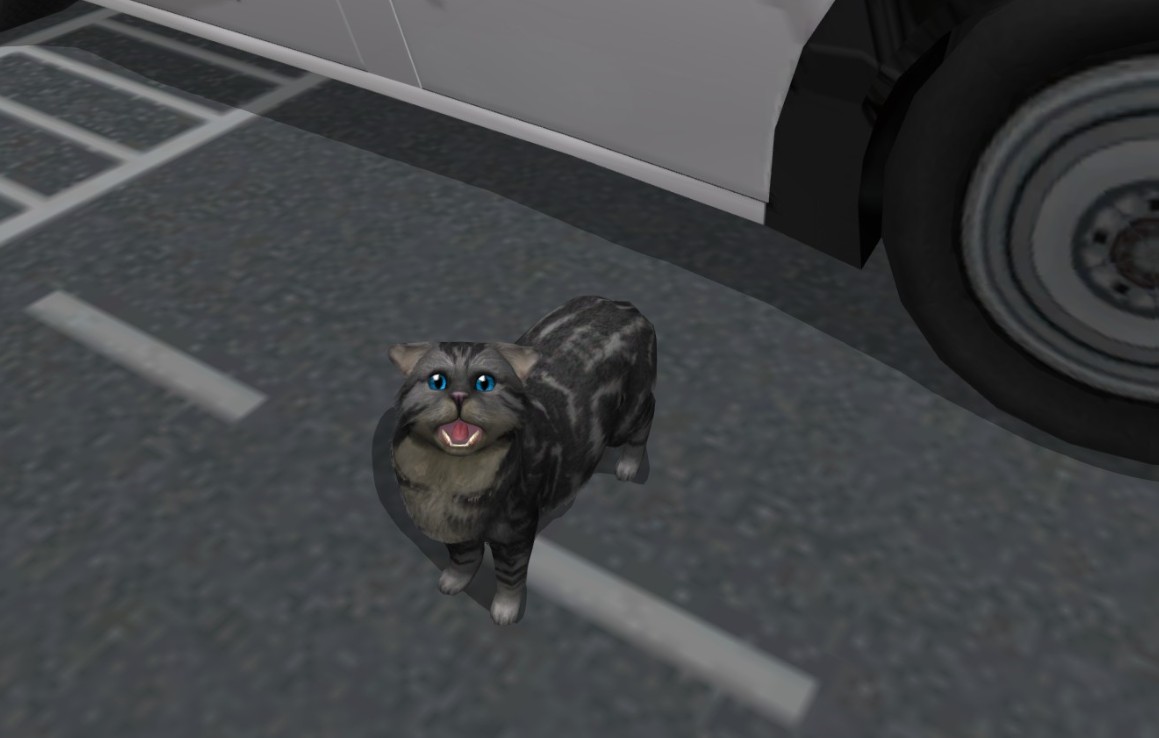 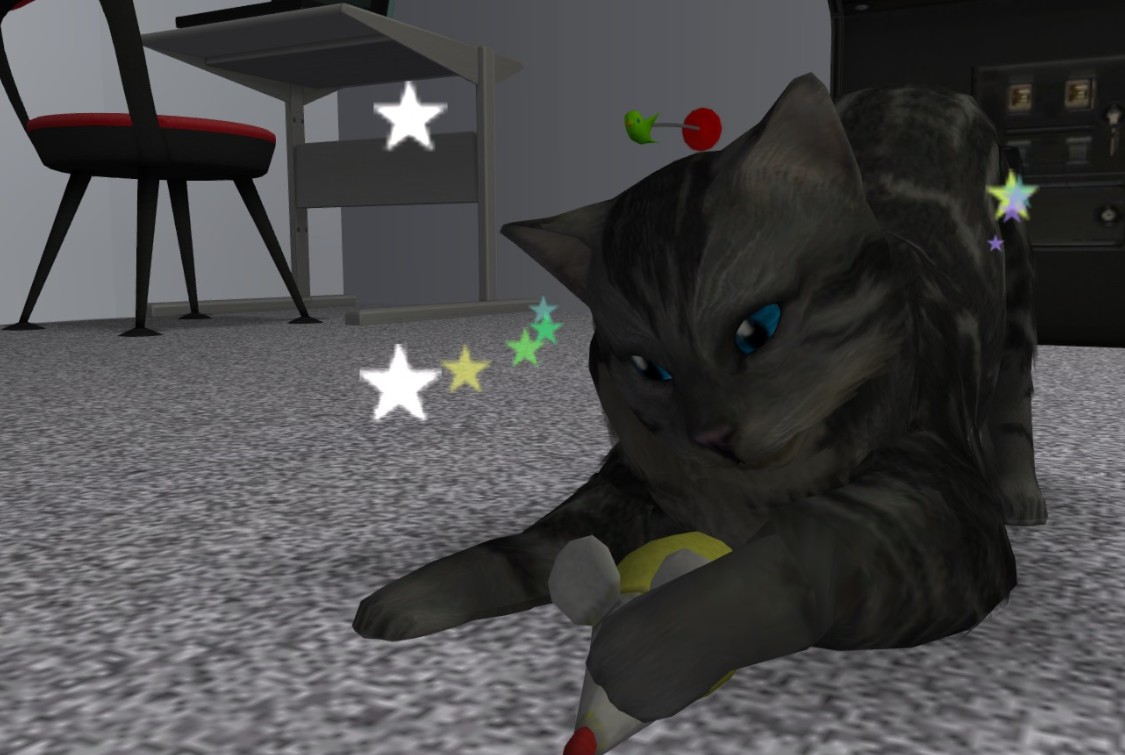 And some cute things I had not seen. The floating cat was like that when I entered the lot..
Namaste... or "go"
CASnarl 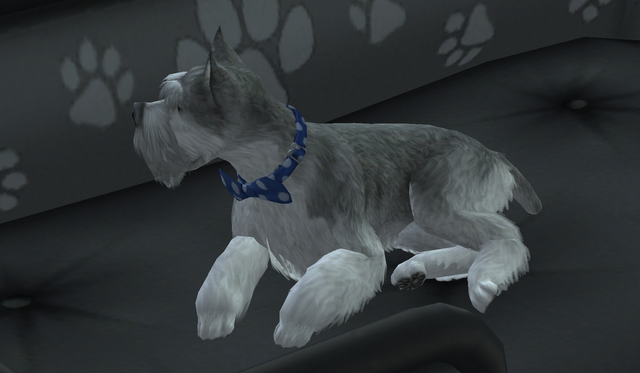 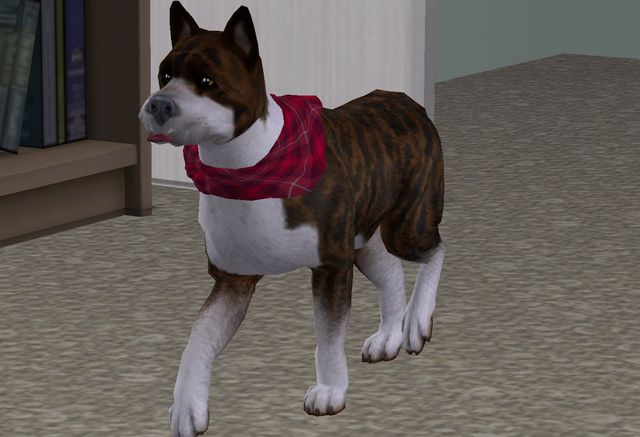 Porthos & Cymoril Roseland modeling some of DeeDee's 4t2 pet accessories I completely forgot I downloaded ages ago. Aren't they cute? I'm not sure if the bandana is totally Porthos' color but it's the one Cyd bought so.
simsample

@CASnarl I love your dog pictures! I use those DeeDee pet accessories too, very fun! 1. Pauline Aspir: "That moment when the dog gets to ride shotgun and you are thrown at the back seat"

Breaking news- Cat gets leg bitten off by overzealous cleanbot! @natbsim75 That puppy handbag is adorable, did his little legs move or did he remain still? Such a cute glitch!
I will choose a path that's clear- I will choose free will
-RUSH- -RADIO- -RADIO- -ARCHIVES-
Simpeople and Me Archive- -11Dots Archive- My Sims World Archive
natbsim75
Field Researcher
#391

I don't think that the "puppy handbag" is a glitch, I think it's an intended game "feature" because all the sims who live in a house with a foundation and they have puppies, they "carry" them this way to take them outside to pee. Or, maybe it's not a "feature" and it's the same thing that happens when sims get out of the house and they put their palm on their forehead to shade their eyes from the sun and when they happen to carry something (a garbage bag, a... baby or a... puppy

) they put whatever they carry on their forehead too!
I have, also, noticed inactive sims in the sims 3, hold babies like that and I hate it. And to answer your question, no, the puppy doesn't move its legs when it's being "carried" this way, it remains still! I see that you play with dogs, haven't you seen puppies who are not "piggy", bark at the door when they want to go pee and they can't climb down the stairs? It's exactly like in real life when the dog wants to go out and tries to make its "master" to understand that.

Also, an irrelevant note, I like your avatar sim and I laugh so much when you upload photos of his... adventures in your games

My current fav pet Khoshekh just chilling on the countertop where he knows he isn't supposed to be. Typical cat. 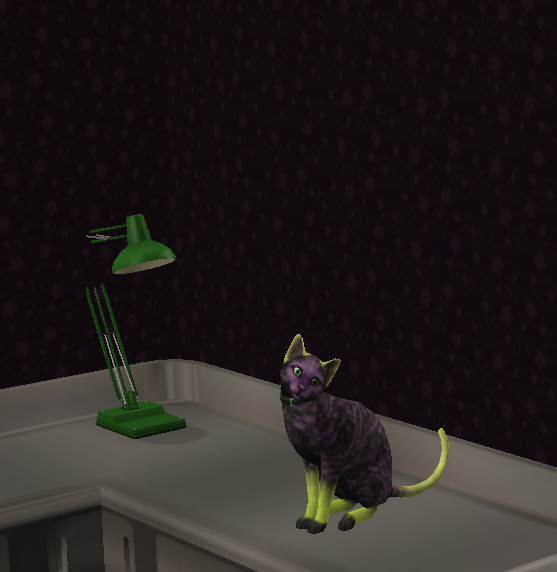 Cats dream of turtles?
Namaste... or "go"
Back to top