Got some new mods that create the fence and ditch-filler around a basement; like how the basement "apartment" patio came out. To bad you can't get the camera to go down to that level! Here's the layout (unfinished)

That second pic looks like the restaurant in The Bold and the Beautiful :D
RoxEllen1965

Quote:
It depends on what camera and camera mod you're using. You might be able to get down in there with Cameraman Mode or Free Camera or First Person Camera or whatever it's called (the Tab key). Q lowers the camera while E (elevate) raises it.

I have a mix of modded cameras, but that particular camera in my game is one by Gunmod and I'm pretty sure it would get down in there.
http://www.modthesims.info/download.php?t=97642
Thanks to Crmelsimlover for sharing these rare Christianlov mods for TS2: Cpack editor with working face DNA fixer and Skin Selector Painting Prototype. Instructions for adding custom skins to Skin Selector at post #5 here. Instructions for using the DNA fixer at post # 2662 here.
StrangeTownChick

Oooh please say there's a tutorial or something for that basement patio somewhere! 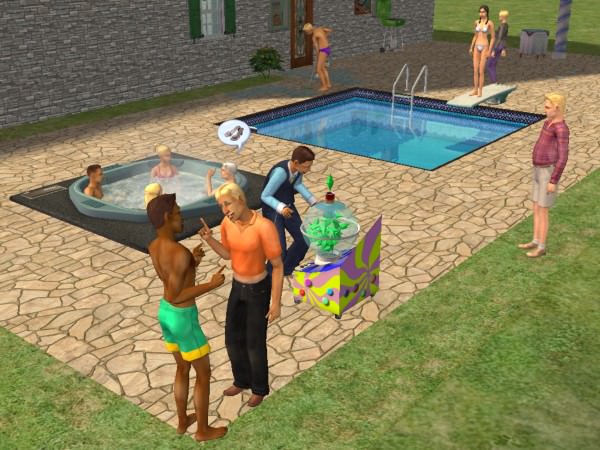 Now that the snow is gone (unlike in real life) it's time to do everything outside again. *sigh* I just love the feel of a summer party. 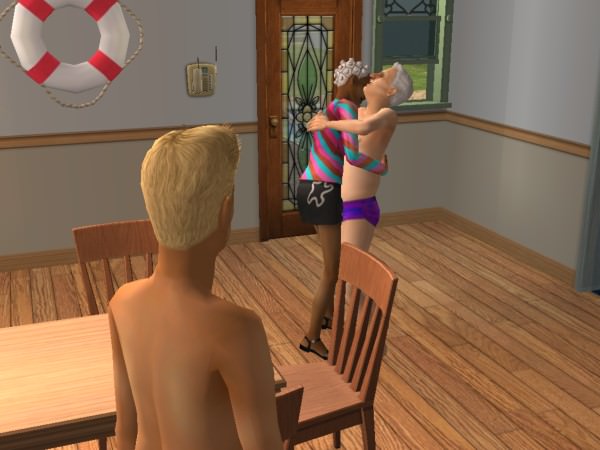 As Finnian looks on at his aunt and uncle, he thinks to himself, "I hope Reed and I are like that when we get to that age." 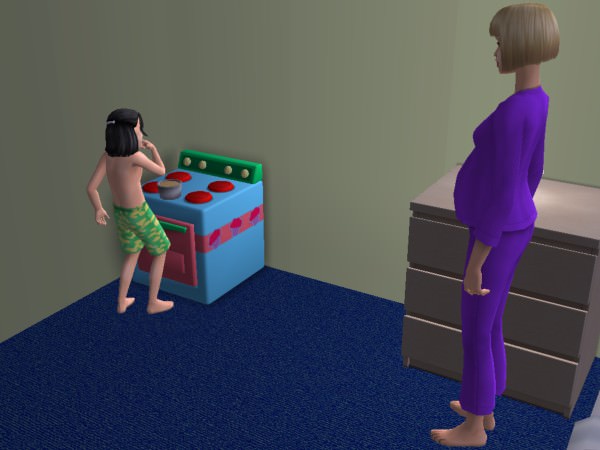 Nicole insisted on baking a cake for her auntie before she went to bed. Genesis watches fondly and hopes her own child will be this cute.
(Nicole's swimwear is an ah, unintended side-effect of my child clothing mod. I like the everydaywear effect, but this is...
Ah well. Let's say she didn't have a swimsuit so her dad pulled out his old one. She's only like five anyway.) 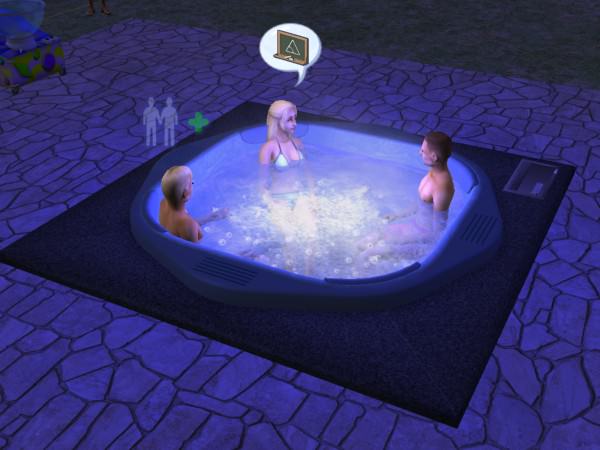 It's always interesting to see who the hot tub crowd is at these parties. This time it's Finnian's brother Gabriel, their cousin Ingrid, and Ingrid's twin sister's fiance Orlando.
I've got one or two things on MTS, but most of my stuff is on my main site here:
http://simcessories.blogspot.com/
(Now recruiting budding creators.)
grammapat

Quote:
=
I already have a camera mod that I like (might be one of Gunmod's - don't remember and can't even FIND right now). I'm afraid to change to above one, just to get "floor level" view of basements, in case I lost other things my mod does.
Namaste... or "go"
grammapat

[QUOTE=StrangeTownChick]Oooh please say there's a tutorial or something for that basement patio somewhere!QUOTE]

Let me see if I can find the mods; both are squares that you place at the upper ground at the edge of the slope. One makes a flat wall (with lots of choices of wall and fence at the top), one "fills in the ditch" with different "ground covers", and then you can add plants with move-objects. It can be kind of tricky and I actually wrote a "how to" for myself.
Namaste... or "go"
StrangeTownChick

Cool. I'd love to be able to do something like that.
Also I'm not even sorry this is my third post in like a day and a half. I've been playing a lot! 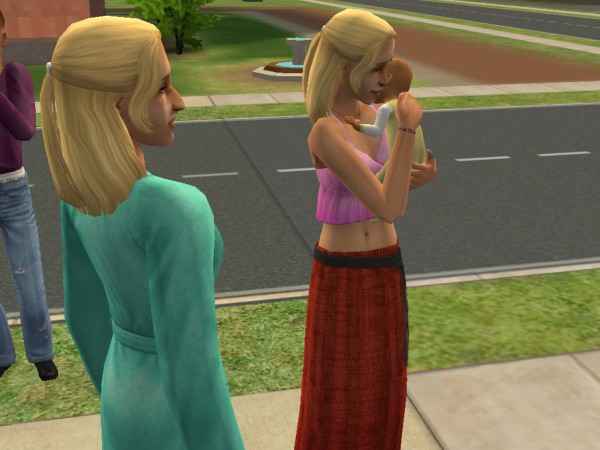 The first baby to be born on-campus has arrived. Little Olivia Agnarsson is cuddled by her mother. She didn't spend a whole lot of time on campus though--Julia only had four hours til her final final here. 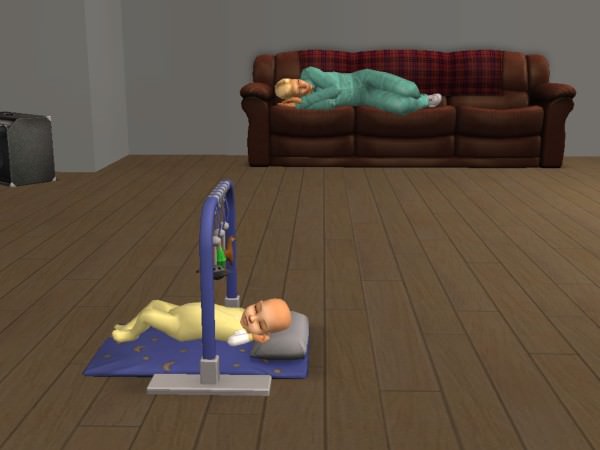 Another new arrival, Paul, and Julia's cousin, Gabriel, have a little father-son naptime. 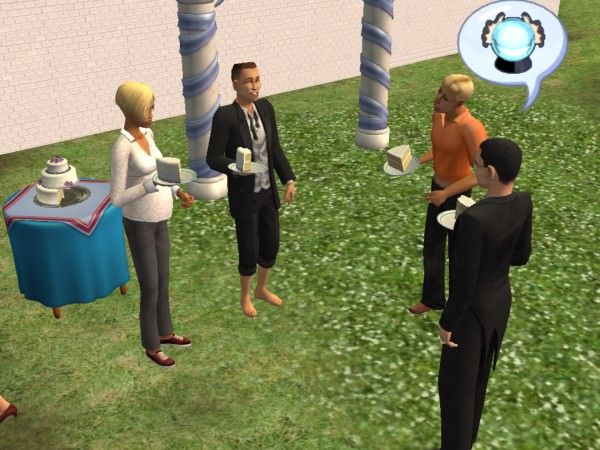 At Julia's twin sister Ingrid's wedding, the guests gather around to eat cake and chat and...what the hell are you wearing, Randy? You...you don't even have shoes! 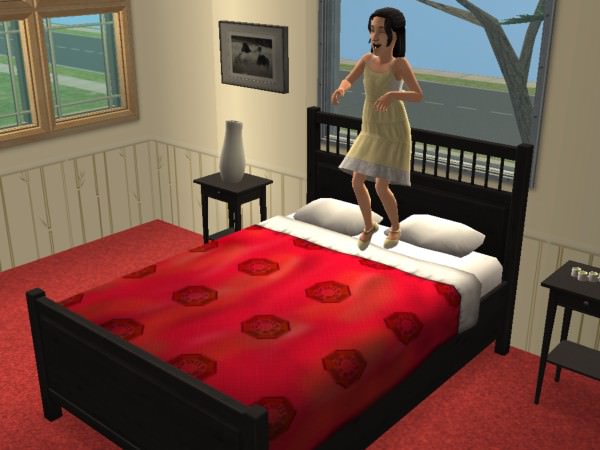 Being the only kid at a party full of grown-ups doesn't mean you can't have any fun! Nicole happily bounced on Ingrid and Holly's new bed for hours.
I've got one or two things on MTS, but most of my stuff is on my main site here:
http://simcessories.blogspot.com/
(Now recruiting budding creators.)
maxon

Quote:
It's tbudgett I think - their cover up slope mods:

Very useful - I have a few other tricks to do that too but those are very easy to use in my experience.
I no longer come over to MTS very often but if you would like to ask me a question then you can find me on tumblr or my own site tflc. TFLC has an archive of all my CC downloads.
I'm here on tumblr and my site, tflc
grammapat

Yes, thanks. The first ones are the ones I have. My only complaint is that, even with that big patio, the windows won't let the light in..guess I need to ask about that.
Here are pictures of the finished area:

and yes, it's tricky to place the walls, trench covers, and plants
Namaste... or "go"
RoxEllen1965

Quote:
Try it with the camera mod you already have. Gunmod's can't be the only one that would get down in there. Just make sure you use the Tab key camera and lower it down with the Q key.

I knew about TAB and Z (to zoom in), didn't know about Q!
=
But rats, it does the same thing as Z & X - moves forward and back, but does NOT LOWER the camera. Anywhere but a basement, you can get the camera to look like "you" are sitting on the ground, and can actually tip back and see ceilings. But in basements, it's only like you were STANDING on the ground level, looking down.

Q to go down, and remember..E to get back up!

Little Muffy got lectured by her mom. And became best friends with her anyway. 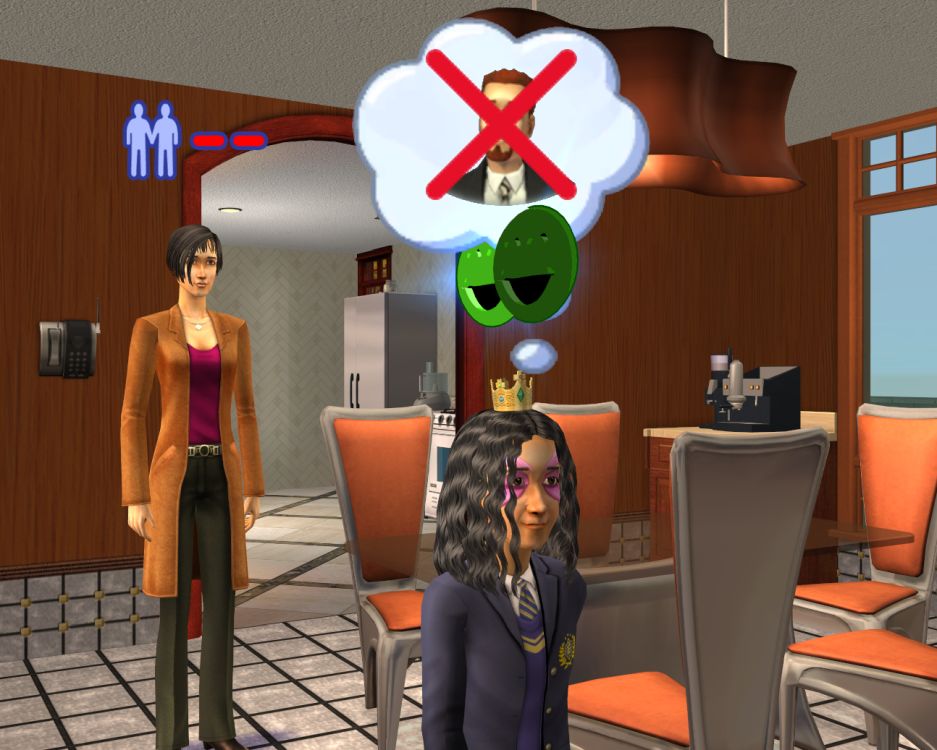 Later, after I'd installed some mods, Muffy was kicked out of the shower nude as the result of a lot reset. I told her to go feed her pet womrat, so she did! 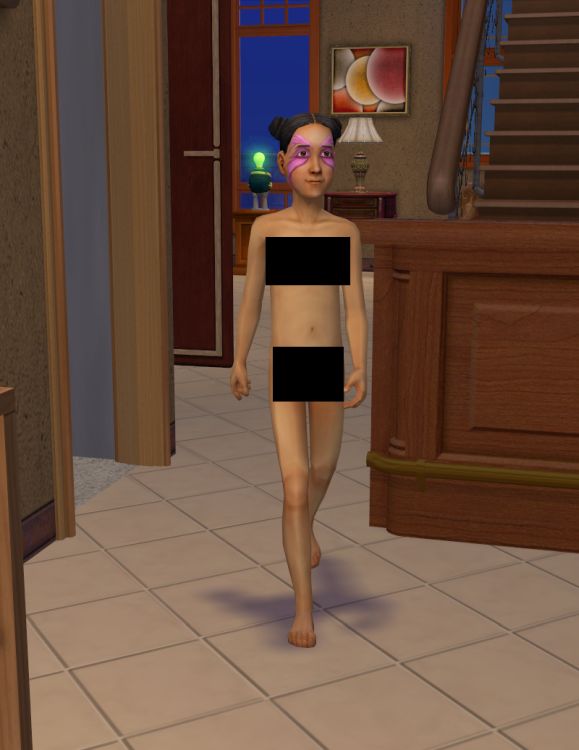 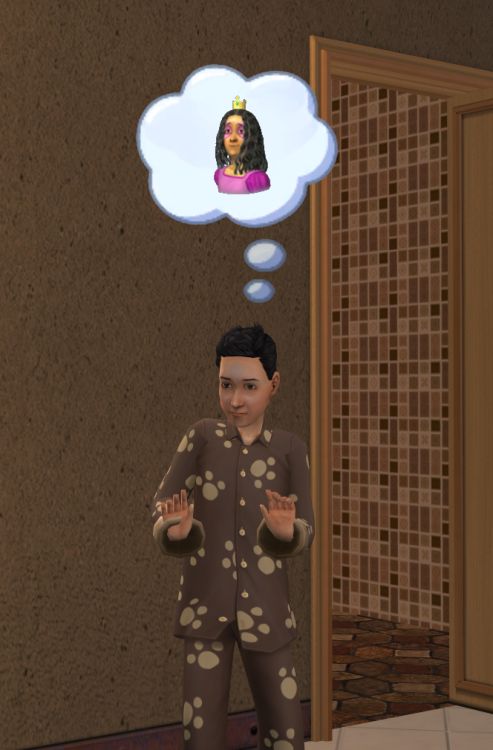 "Honestly! Kids these days! That grand-daughter of mine will drive me to drink!" 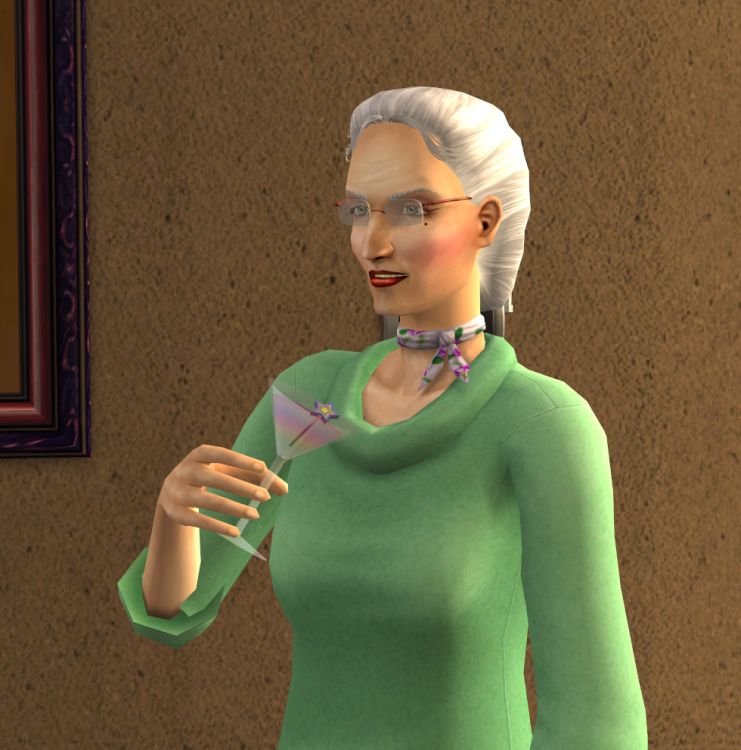 Life of Jag
Jag lives in an apartment in Scandalica City with his dog, Paris. When he's not painting still life he's trying to gain skillz for his job. Paris is a service dog so she's away most of the day like him, to help out with bills

He's trying to make it as a professional gamer but his apartment is more than his job pays so on his days off he is a barista at Blackwheel Bus Station. 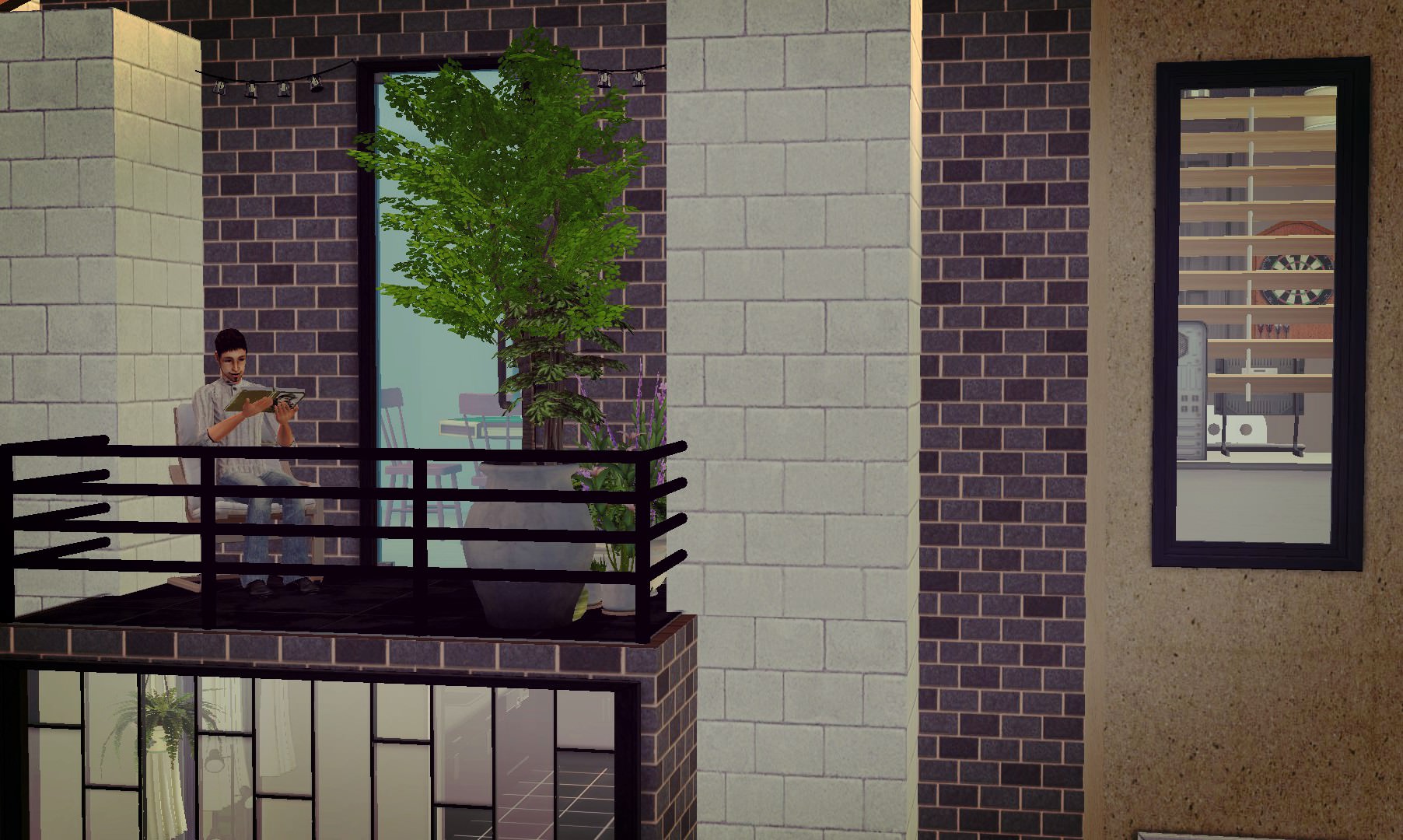 Paris is a good doggo 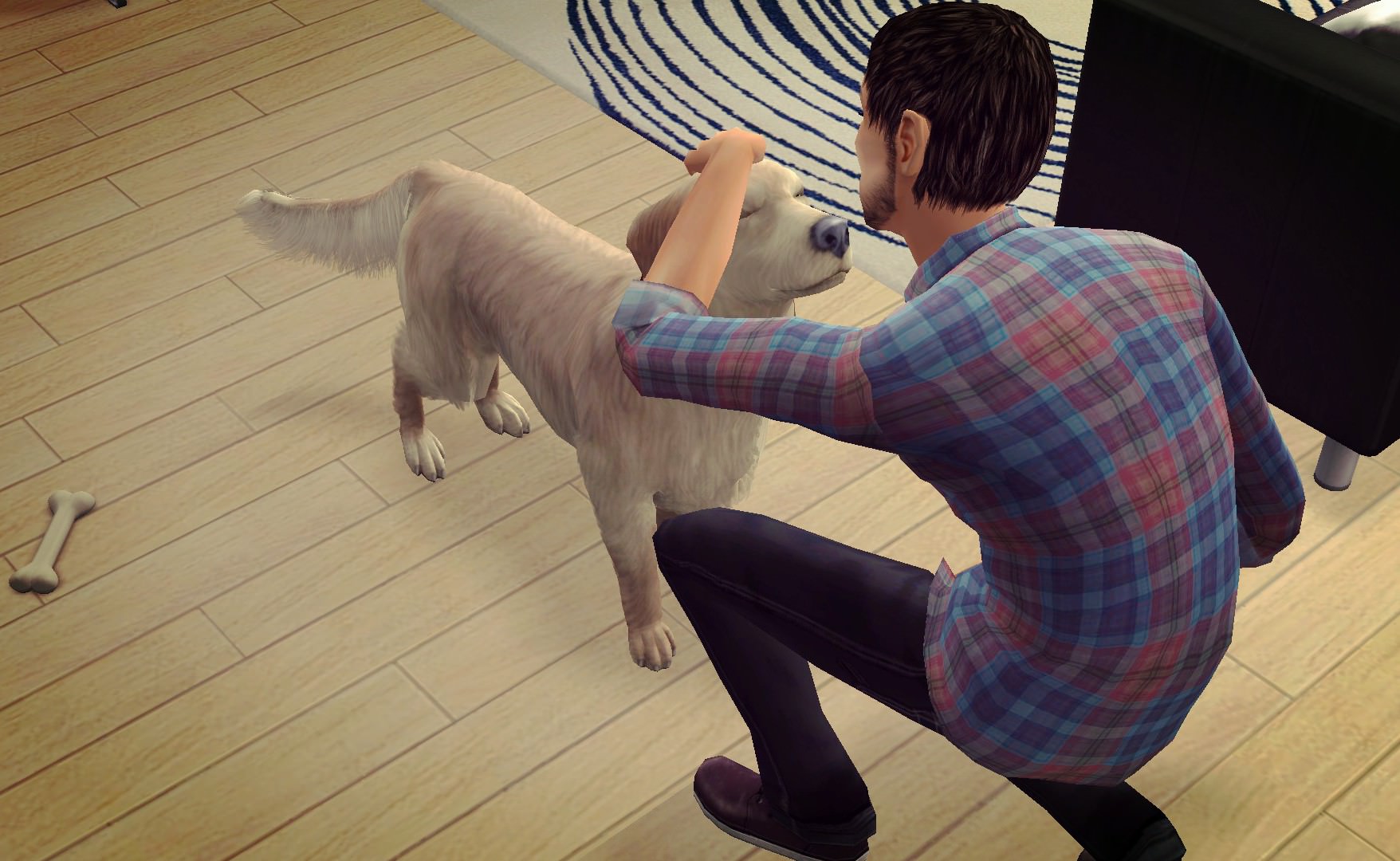 Standing around serving cappuccinos to make the extra $$ 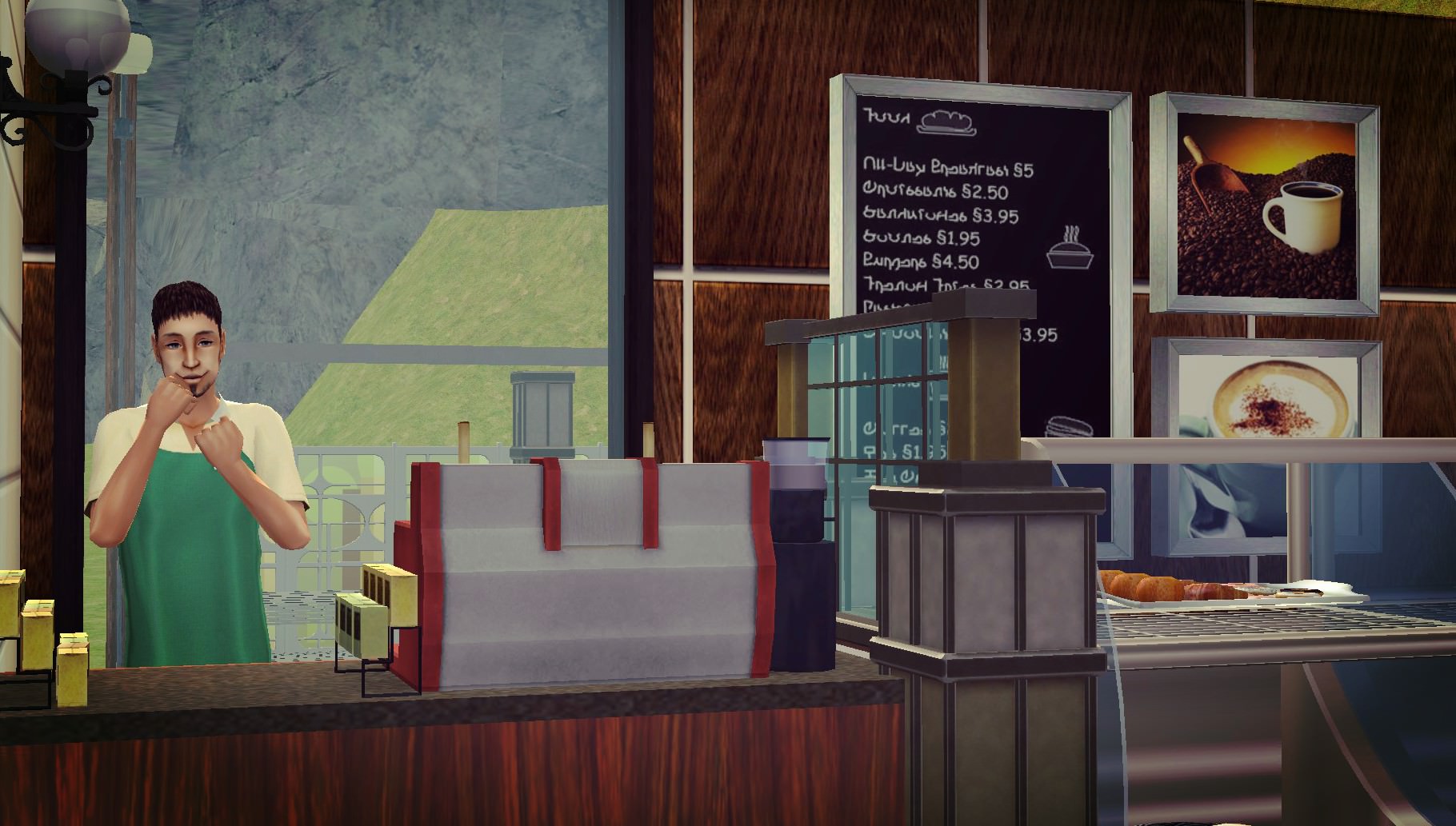 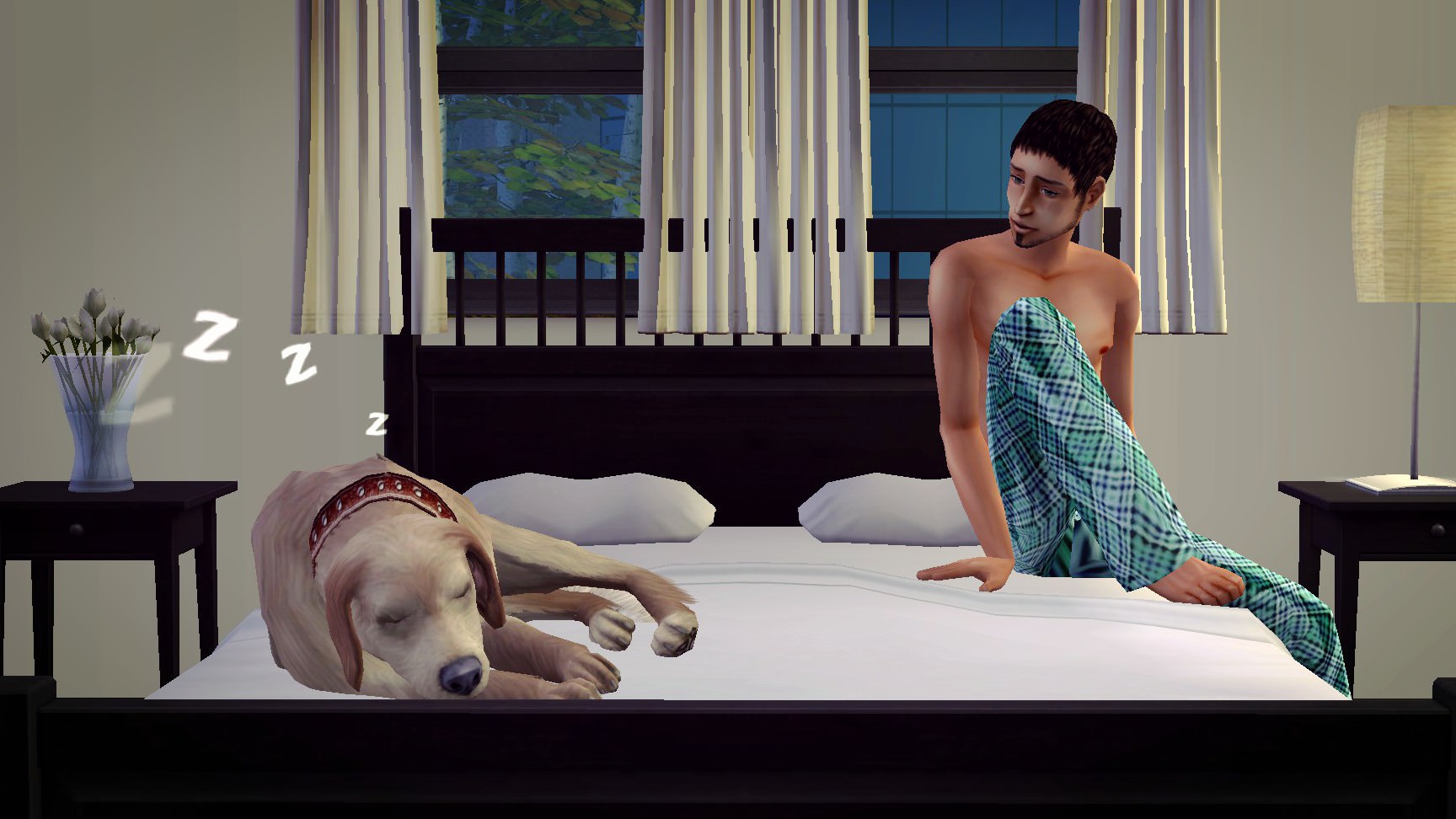 Not only excellent pictures, but very sweet.
Namaste... or "go"
Charmful

In a Bluewater Village attached to one of my oldest neighborhoods, Denise Jacquet repeatedly threw error after error whenever she visited a community lot - even when I was playing her. (This is an old neighborhood made from Maxis templates - the Maxis version of Denise always seems to be buggy.) I got tired of this, so I used Rodney's Death Creator to kill her by fire.

Denise's son Gilbert is so shocked and stunned by his mother's death that he can't stop thinking about ... his grandmother! 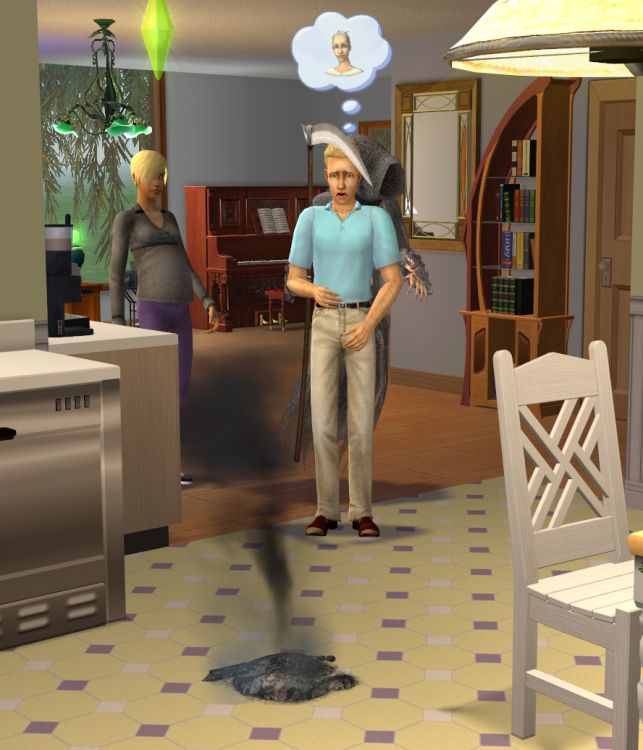 Gilbert's wife is a bit shallow. She quickly becomes bored and wanders off to obsess over the family piano. Again.

The gardener is worse and, while bringing raked leaves to the kitchen trash compactor, thoughtlessly tramples Denise's ashes. 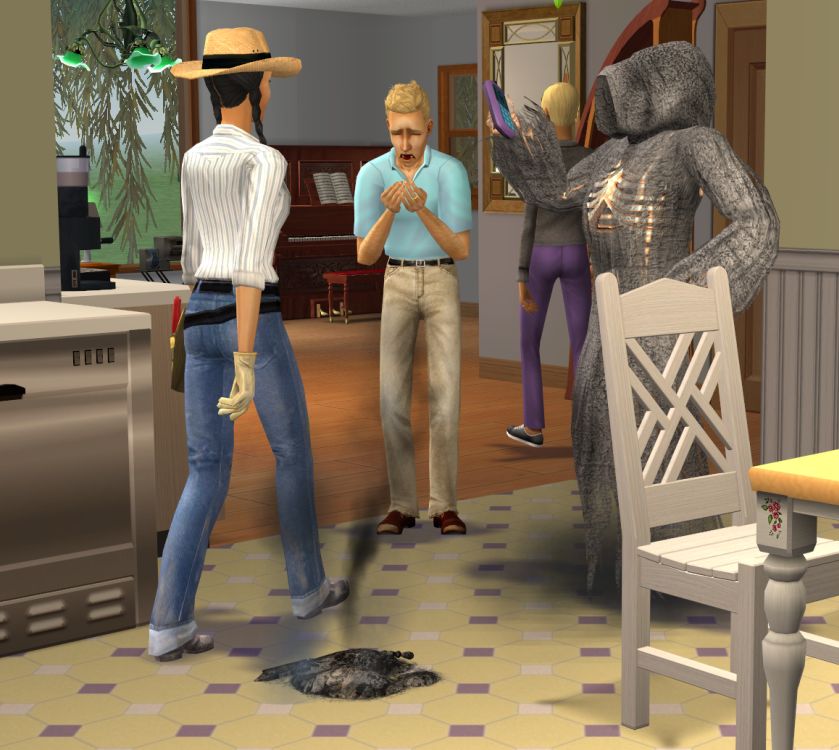 "Oh well, too bad Mom's dead, but at least my wife is a fantastic piano player!" (He's being polite - at that time she only had three Creativity points.) 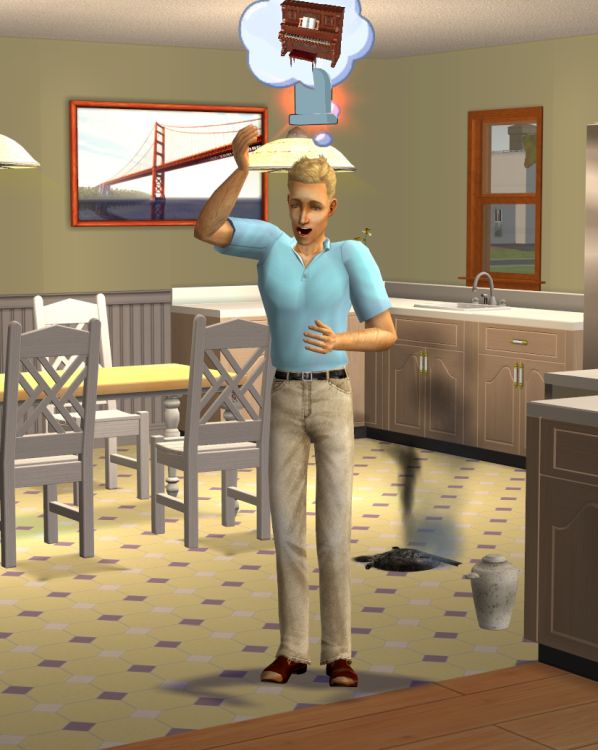 ...I think Don has a history of calling my redhead asshole girls.
lfria

Hermia's stoked she got demoted. 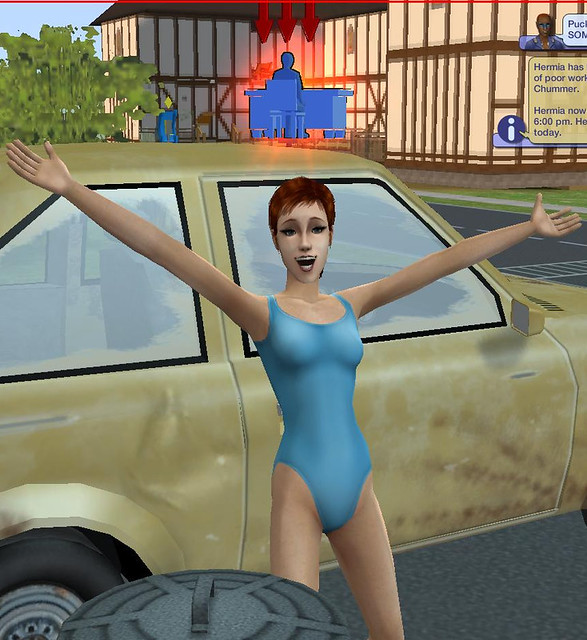 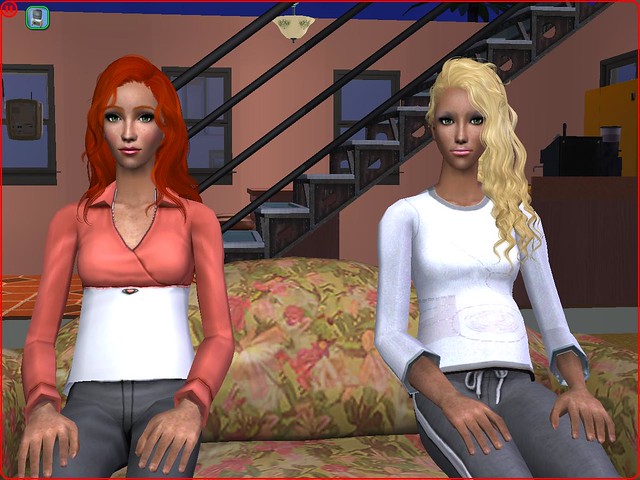 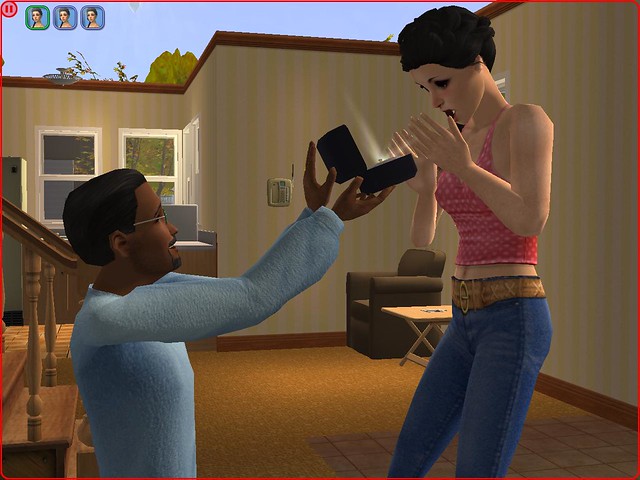 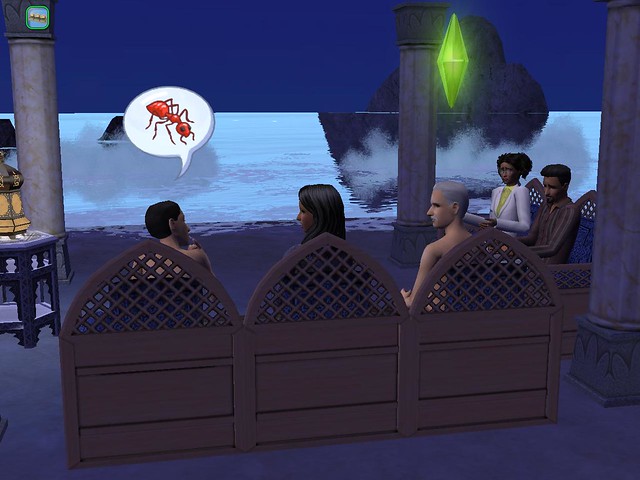 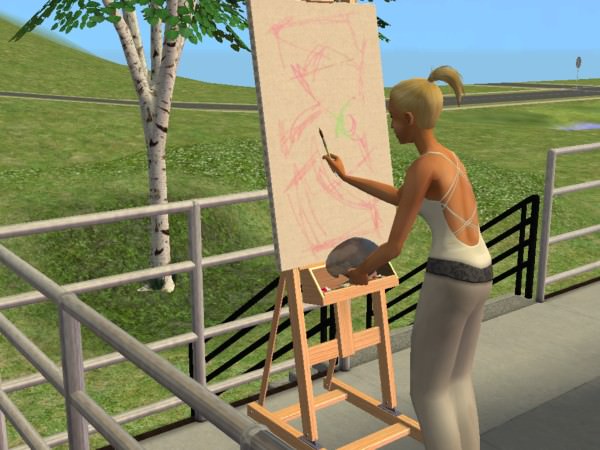 When Holly asked for an easel, and I obliged to see if she'd roll a want to adopt like Ingrid did, I put it on the back porch so she could be inspired by nature. I did not expect her to be so inspired that she'd go out and start painting it in the middle of her wedding party. 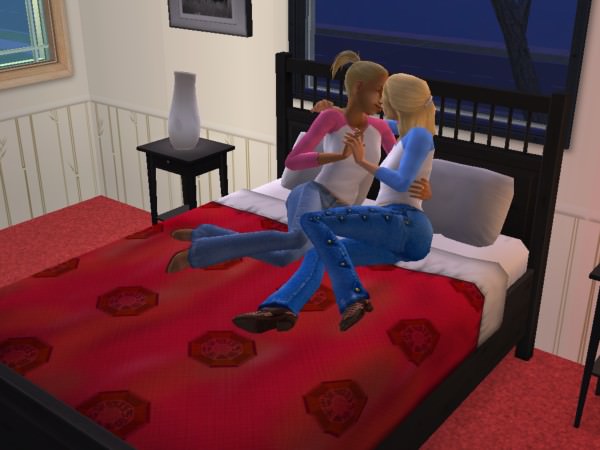 It's cute when couples have matching aesthetics. 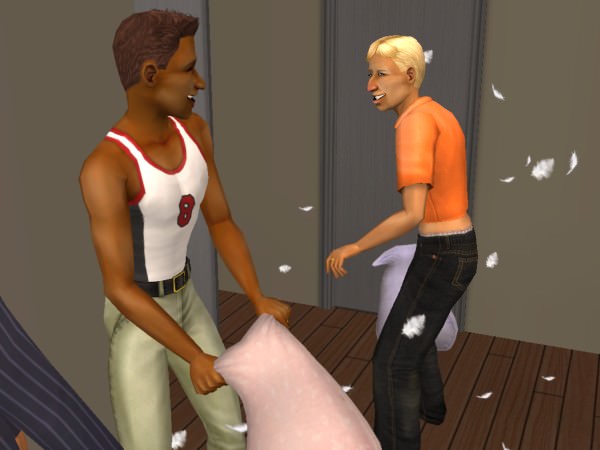 Julia's wedding guests found some...interesting forms of entertainment. This was the first of four pillow fights at the event. Hey, Julia and Orlando are already parents and Julia's trying to set up a robot shop, so their furniture is pretty bare-bones! 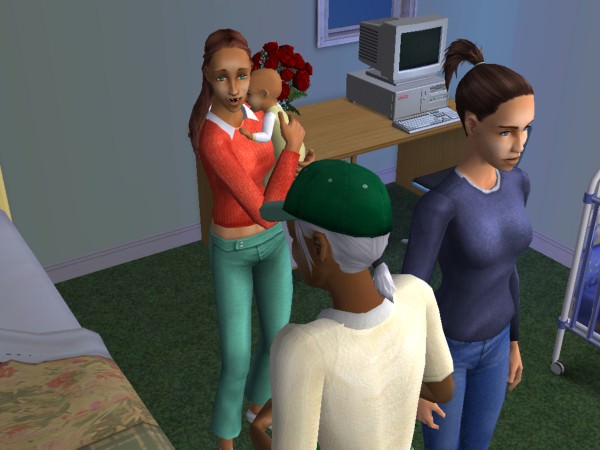 "Hey you! Cook! Run and tell Keith that his daughter is here!"
I've got one or two things on MTS, but most of my stuff is on my main site here:
http://simcessories.blogspot.com/
(Now recruiting budding creators.)
grammapat

and that's not the worst of it, she has a turtle neck Sims 2 Story|My Tumblr|Donate
See something of mine you like? Just ask, and I'll get you a link to the item you're looking for.
blueskii55
Lab Assistant
#1648

Checo is finally happy...
"Nothing is what rocks dream about." - Aristotle
grammapat

I haven't liked this sim since he was a toddler, and as a pudgy, lazy, "gift to the ladies" I like him even less

but then he is a great dad (all by HIMSELF!)

He also has a chin you could slice cake with.

How come his hair chest disappeared under the t-shirt/vest?
I no longer come over to MTS very often but if you would like to ask me a question then you can find me on tumblr or my own site tflc. TFLC has an archive of all my CC downloads.
I'm here on tumblr and my site, tflc
Back to top