Don't you ever get tired of spaghetti?!?
Essa

"Oh non" when the game crashed after Albin and Lys's dream date. He proposed and she said "yes". It was a surprise engagement.
simsample

Oh no @Essa- did you lose any game play?
I will choose a path that's clear- I will choose free will
-RUSH
Simpeople and Me Archive- -11Dots Archive- My Sims World Archive
If you are looking for files from old websites the Internet Archive is your best friend.
AndrewGloria

When I opened up the McBain's lot about an hour ago, their teenage boy Gerry wasn't there, and I feared the worst.

I shut the game down and checked in SimPE; he had become a townie.

I reopened the game and went back to their lot. I summoned him as a townie using Inge's teleporter painting, and then used it to move him in. He rejoined the family with all his relationships and memories intact. The only changes were his motives -- bladder now half full and all the rest in the green. (When I last saw him his Fun meter was almost red!) And the homework that was lying for him to do disappeared! Gerry certainly wasn't complaining about that! He was now in a very good mood and he happily tidied up the house while the rest of the family slept.

I think I must have turned him into a townie myself, by clicking on the teleporter painting when I was only half awake.

Well, I was worried for a while, but, as they say, "All's well that ends well!" Which, come to think of it, is a play by Wullie Shakespeare. ("William, if you you please, till we're better acquainted," he says.) Who, even though he doesn't live there, is really quite a significant figure in Veronaville!

(NOTE: "Wullie" is a Scots variant of "Willie", familiar short for "WIlliam".)
All Sims are beautiful -- even the ugly ones.
My Simblr ~~ My LJ
Sims' lives matter!
Essa

Quote:
@simsample
No, just the date at an owned restaurant. I try to save after each worthy event.
After launching the game again, Albin asked her for a date at his place. He didn't have the time for proposal. She left around 2 AM complaining that he didn't care about her enough.

On a side note, she got pregnant after their first date when I was playing her household (I play with silent pregnancy and risky woohoo so I don't know how). She has morning sickness.
AndrewGloria
Mad Poster
DELETED POST
10th Sep 2020 at 6:12 PM

This message has been deleted by AndrewGloria. Reason: Sorry, posted in wrong thread. Moving it to the "What did you Discover?" thead.
Charmful

Me, just now: "Why are all the hookers hanging out at the gym?"

My husband turns around from whatever MOBA he's playing: "Well, if you think about it, when their profession relies on their looks, it makes sense."

For the record I have 5 escort service sims and two of them showed up at a gym I was taking my active sim to to fulfill a 'get fit' want.
Uh oh! My social bar is low - that's why I posted today.
My SIMBLER | SIM WHIM | SIM VIDS | SIMS 2 STORIES | SIM PICTURE-TAKING TIPS | MY HOOD | SIMSTAGRAM
Essa

Arnaud Phaneuf invited Coline Bureau-Lagrange on a date at his house.
Me: What?! He was about to cook for you ! when pregnant Coline decided to end the date. She was hungry.
They're engaged and I wanted him to roll the want of getting married. Since he also fears of being left at the altar, I'll deal with it later. Not sure they'll get married before she give birth.
Shadow214
Lab Assistant
DELETED POST
12th Sep 2020 at 12:13 AM

This message has been deleted by Shadow214.
simsample

Did I remember to put a sink in that last house I built?
I will choose a path that's clear- I will choose free will
-RUSH
Simpeople and Me Archive- -11Dots Archive- My Sims World Archive
If you are looking for files from old websites the Internet Archive is your best friend.
CrystalFlame360
Lab Assistant
#3584

Oh, I'm known within my household for talking to myself while I'm playing games; The Sims is no exception to that rule.

When any of my sims are quite low on hunger and someone else in the household has prepared a meal, some sims will just go to do something else and not eat:

Or if they 'Stuff Face' instead of eating the full meal:

"What is that going to accomplish? Very little. Eat the spaghetti on the counter."

"Why are you complaining? I didn't buy it for you, unless you're wanting to eat from the floor."

When sims complain due to low environment score with there being weeds outside:

"Instead of standing there and complaining, just pick the weeds up!"

Someone kicks over the bin:

"John, you idiot!" (Me to John Burb after he set the house on fire)

"You can't do Tank, he has a girlfriend." (Me to Garnet Lothario after I looked at her 'One Sim' for ACR. I set it to none after that)

"Mortimer, calm down, it's just a bed!" (Me to Mortimer's ghost)

"Huh? When did this happen?" (Me loading a different 'hood up after a while)

"Don't smustle by the door!"

"I told you to to change the baby's nappy, not dance!"

"Why did you smack him for? He didn't do anything!"

I have more, but I'll leave them for another day. I'm also going to leave out the more 'colourful' things I say, as I doubt that's allowed here.
When a game is predictable, it's boring.
That goes for any medium that isn't life.
That's why The Sims 2 is my favourite sims game.
It pays great attention to detail and can be unpredictable.
The Sims 4 is another story altogether...
Shadow214
Lab Assistant
#3585

"Maybe it was a bad idea to put in a hot tub."
During my play session, about five sims got struck by lightning while in there and resulted in one sim's death.
BlueAlien
Scholar
#3586

"No, Rachel is not available to talk. She asked you to leave because it's late and she's going to bed. What part of that makes you think she's dying to chat to you as soon as you get home?"
kiddypatches
Lab Assistant
#3587

"Redundant much?"
When I saw that one townie had the name, John Johnson.
TadOlson

It looks like my apartment housing options just became affordable housing for sims of lower and modest incomes.
Said when I noticed another rental complex got affected by that halved rent Mod I added to my game to fix the way too high rents that were EA defaults and left very poor sims no housing options and made it alomst impossible to move new sims into town.
TadOlson's Blog
sugoisama
Space Pony
#3590

Quote:
Akaky Akakievich Bashmachkin would like to know your location
AndrewGloria 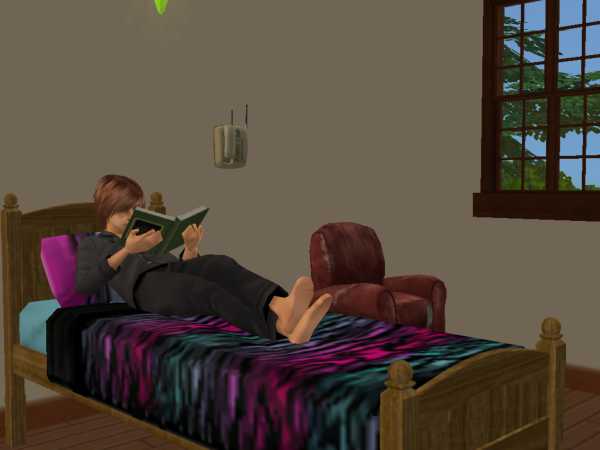 Gerry, please just take it easy and try to relax. Stop worrying about the toddlers. The rest of the family will look after them. You're a good kid Gerry, and your heart's in the right place, but you really are not well just now, and you've got to put yourself first. You've got to look after yourself. Please just relax. If reading helps, then read! Concentrate on your own needs, and try to enjoy yourself. Well, as much as it's possible to enjoy yourself when you've got 'flu!

When you start to feel tired, just go back to sleep. The more you take it easy, the sooner you'll start to feel better. Your mum, your dad and your sister will all look after Peni Jo and Peregrine, and see they're all right. And I'll keep an eye on them too. I promise!

All Sims are beautiful -- even the ugly ones.
My Simblr ~~ My LJ
Sims' lives matter!
Clashfan

What were you thinking, building a family home, and only putting in a single spiral staircase? That was supposed to be the backstairs off the kitchen option, not the main staircase, you moron.

Why did you think it was a good idea to use a Maxis built house for a legacy family again? It is literally the house of endless routing failures but sure go ahead and stuff the grandparents, new couple, and kids all in there and see how it goes. Idiot.

(All things I said to myself outloud today minus the sweary bits and self inflicted insults.)
Back to top