OK, which career rewards do you use? Also, you don't really need a mod to unlock them. There is already a cheat built into the game to unlock them (unlockcareerrewards). You have to have tce enabled first though.
Advertisement
TadOlson

I used to use another cheat at one time though it would only unlock for your active family on their home lot.I've had THIS one is what I have used for a long time to help with that and to be able to place these items on any lot in my town in buy mode.
TadOlson's Blog
Sonshine
Instructor
#878

I guess I don't use the cheat often enough to put a mod in for it. About the only reward I really use is the plastic surgery one to make townies decent looking, lol.
TadOlson

I use the pinball machines and charisma podiums along with the bookcases on community lots and in common areas of apartments for residents to take advantage of them and two of those things can save sims from going bankrupt before fiding a job or having to take a job they don't want just to earn money to pay bills.I actually have my game Modded and hacked to kingdome come and it's not even come close toslowing it down and that's not counting the tons of custom foods and objects I installed.
TadOlson's Blog
Sonshine
Instructor
#880

Do you have Bon Voyage? If so, your sims can dig holes in the ground and find stuff to sell. That's how I started out my challenge. The map pieces sell for $400 each! There is a very small chance that you can get the Ming Vase too, but it's rare.

Also, since you love to play medieval themes, here are a bunch of sites that you can find d/l's for them:

and their medieval themes: http://www.feenwald.de/en/kl_antik.php

I believe the last site also has a "medieval" Myshuno game. There are also "medieval" doll houses for children. I used the first 2 sites for my Island challenge. I think you can even find chamber pots on one of the first 2 sites. It's kind of funny though to watch the sims "flush" a chamber pot, LOL. On the Island Challenge, the sims are isolated on a deserted island and have none of the modern conveniences,LOL I also used some invisible appliances. There is also a "root cellar" that is cloned from a refrigerator. I had my sims grow all of their food which was nice since there was no grocery store. I also had a farm wagon that was horse drawn for a "car."]

ETA: I'm pretty sure there are lots of Sims 3 medieval sites.
TadOlson

I've already got tons of that kind of content though those links can help for others playing this challenge or in case I lost some of my content by accident.I've got a crazy amount of CC and much of it is medevieval for my TOT and homesteader's challenges.I'm playing on UC which is the full collection and have all of the features.
TadOlson's Blog
Sonshine
Instructor
#882

We sound very much alike, LOL I also have tons of mods and CC. I'm setting up a hood now for a landlord and I may well get that mod that allows for "subsidized housing."
TadOlson

That's actually found in the M&G stuff pack and the items are green energy sources which have to be placed while building and setting up the apartment complex.Here's an example of the housing subsidy in action in one of my games at a boarding house I built.They got a check for over 10000$ each day the letter carrier dropped off their mail. 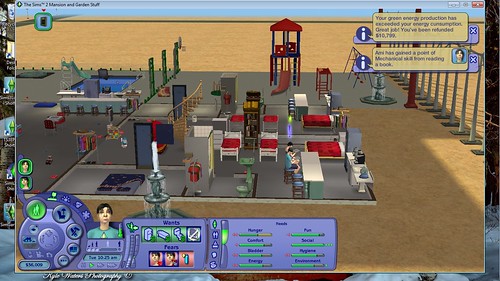 I was talking about the mod you mentioned earlier.

I did put a couple of solar panels on my one house. How many windmills and solar panels do you have on that lot?
TadOlson

I've often had dozens of each type of the two more epensive ones and some got placed on the roof of the building.I probably had about 100 of the two types I placed on there in total and it caused the 10000$ rebate checks from the letter carrier to be dropped off instead of them having to pay bills.
TadOlson's Blog
Sonshine
Instructor
#886

OK, That sounds about right. The mod I was referring to earlier is the "Cheapy Living" one w/the broken pipe or the pipe that breaks often. Of course, I can't do it for this family (poverty to riches one), but I'm building up another hood for this.
TadOlson

I won't have all of my poverty families make it out of poverty because not all of them will want the subsidized housing and some just won't know about it.
TadOlson's Blog
Sonshine
Instructor
#888

I love playing in different situaltions from homesteaders to colonization in TOT and apocalypse challenges,Povertty challenges involve trying to get as many of the town's families to rise above their poverty and try to prosper and to help those unable or unwilling to try rising out of poverty to make the best of their situations and manage to have happy lives despite their poverty.
TadOlson's Blog
moonlight__
Field Researcher
#890

This is more fun than I expected. I broke a couple of irrelevant rules like choosing a small 1x1 lot because I didn't want to deal with a huge lot and I visited a couple of times other community lots but I used the same objects like the ones in provided lots.

The story is that 19 year old Venus lost her family in a fire and became homeless. Unable to ne accepted into homeless shelter, she had no choice bjtto sleep on the street. While staying in various parks she adopted her feline friend (I forgot its name lmao). After series of pickpocketing, she could afford a tent, and then she came across to an abandoned home which was full of essential furniture. The home she found was obviously extremely old and dirty, but she was thankful to have a roof over her head. Unable to find a job because of her homeless status and dirty clothes, she was dumbster diving and shoplifting. Being extremely talented in playing the guitar and drawing she would her art and preform on the streets. That made her in a much better financial position and she was able to find a job in a family restaurant as a dishwasher.
To be continued...

Now what actually happened:
I was extremely lucky with money that it got too easy and annoying. I didn't find anything that says that digging is banned so I did that. I dug up two treasure chests and a ton of maps in two sim days and (all in a couple days after the challenge started) so I'm loaded for this challenge. I'm planning to decorate my home in a boho shabby style. I also force my sim to paint a lot and sell paintings. I also adopted a townie cat, idk if that was aloud.
I'll check if this is aloud, but I'm planning to buy a tattoo shop/saloon as when my sim becames loaded.

Edit: It's not aloud to start a business. Playing it multiple generations is unappealing to me, I'll set a goal for my Sim to become rich by the time she dies of old age since I was lucky in from the start.
TadOlson

@grandma_on_a_killing_spree -I actually only disallowed owning businesses if the town is very small because of the small poulation though it would be allowed only if the family had enough money to buy the community lot for the business without bankrupting their household.It's allowed that your family can make their way out of poverty in my modified rules as poverty isn't something they should get stuck with unless they had no drive to work their way back out of it.I would only allow sims to buy an undevoped community lot to build their business on or to set one up on their home lot before registering it.
TadOlson's Blog
Back to top