My recently completed Riverside. I renovated all the playables' houses (except for the Baxters and Thompsons as I'm planning on moving them to other lots) and gave them makeovers so they don't all look like clones of each other. Here's the Riverside tag on my tumblr for the curious.
https://blackswan-sims.tumblr.com
https://blackswan-sims.dreamwidth.org
FranH The gnomes brighten things up a bit, but some of the residents aren't too pleased about them! Doing a full 180 from my last neighborhood, which was desert-themed... Having fun creating a cozy winter retreat! Where did you find the fire pit ?
Thanks.
Lovely photos !
" Inama Nushif "
Morrowindnostalgia
Lab Assistant The now in hiding Merfolk Villlage, having become larger and more prosperous since migrating to the other side of Tricano island. Thanks to lordcrumps for the cave overhang.
simsample

Oh, I love that @Sims2Christain A secret village! @Simsample, I love that little powerplant, always found it a bit too small and I love the faithful recreation/ inspiration build you've made.
simsample

@Sims2Christain Now how did you flood your hood like that? Do the lots work?

I always really liked @Sunrader 's Pleasanter View bridges, and the Sedona bridges looked like they would fit my main neighbourhood. I have already changed and tweaked the terrain to this neighbourhood many times- the last time was when I did radical surgery on the bridges as I hated how they looked.
Original bridges: I had them looking better in hood view, but of course they still didn't show in Lot view. So, I deleted them altogether using Hood Replace and stuck Sunrader's bridges in. Not a bad fit! I love the way it looks from lots now. I used Hood replace and two versions of the map, one submerged.
the lots had to be placed empty in the unflooded version and left empty until hood replacing the terrain. any prior alteration causes mini islands as they won't sink below the Neighborhood waterline when built upon. flatten terrain flattens it to the waterbsurface, but above 30m(?) or 2 SC4 tile drops the terrain on lot can be edited to restore it.
a lot 45m or 3+ SC4 tiles below the surface cannot be edited terrain wise but can be built upon, provided it is flat.
The lots do function but the camera cannot drop below the NH water. so functionally is a bit limited.
they do often end up with lighter lot imposters than the surrounding underwater area so that's an annoying mismatch.

love your hood. wish I could explore it, but its likely I'd get purple flashing soup.
simsample

That is really innovative @Sims2Christain love the idea! I wonder if the NH cameras could be modded to make it work better? I've wanted to completely redo Downtown for so long, finally decided to actually do something about it. I started with a new Hans' Trap Door Corp, but that project is far from complete and I needed a break, so I started to redesign the Sim Center parks. Doing with CC-free though is really hurting me, landscaping becomes 10x as hard. Still, I think I'll manage something I'm happy with.

(Still very much a WIP)
The park in general was loosely based on the Gulbenkian gardens in Lisbon (I highly recommend searching for more pictures, it's stunning).
Nice Rachel we're having.
My C:Simblr!
Essa 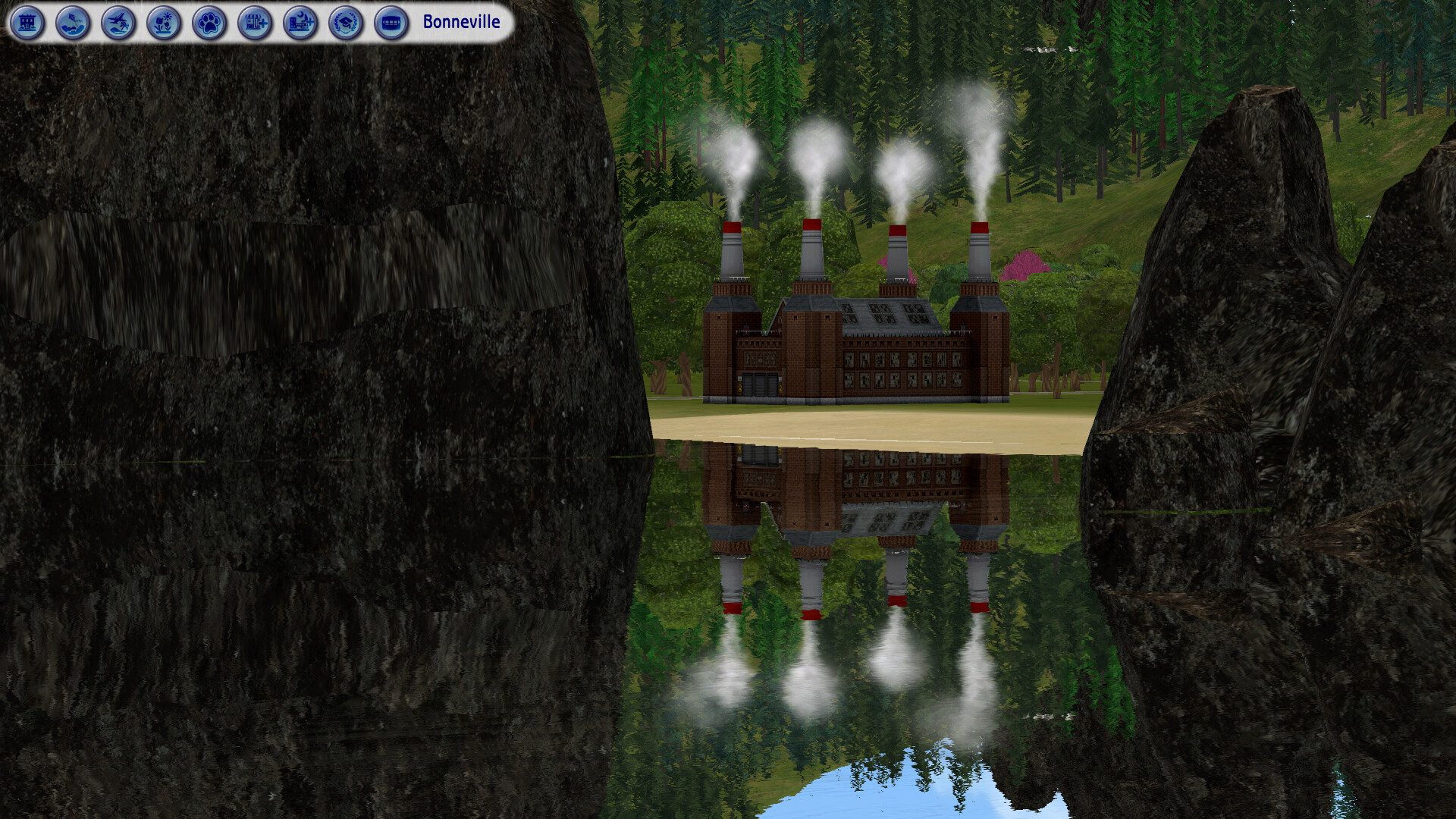 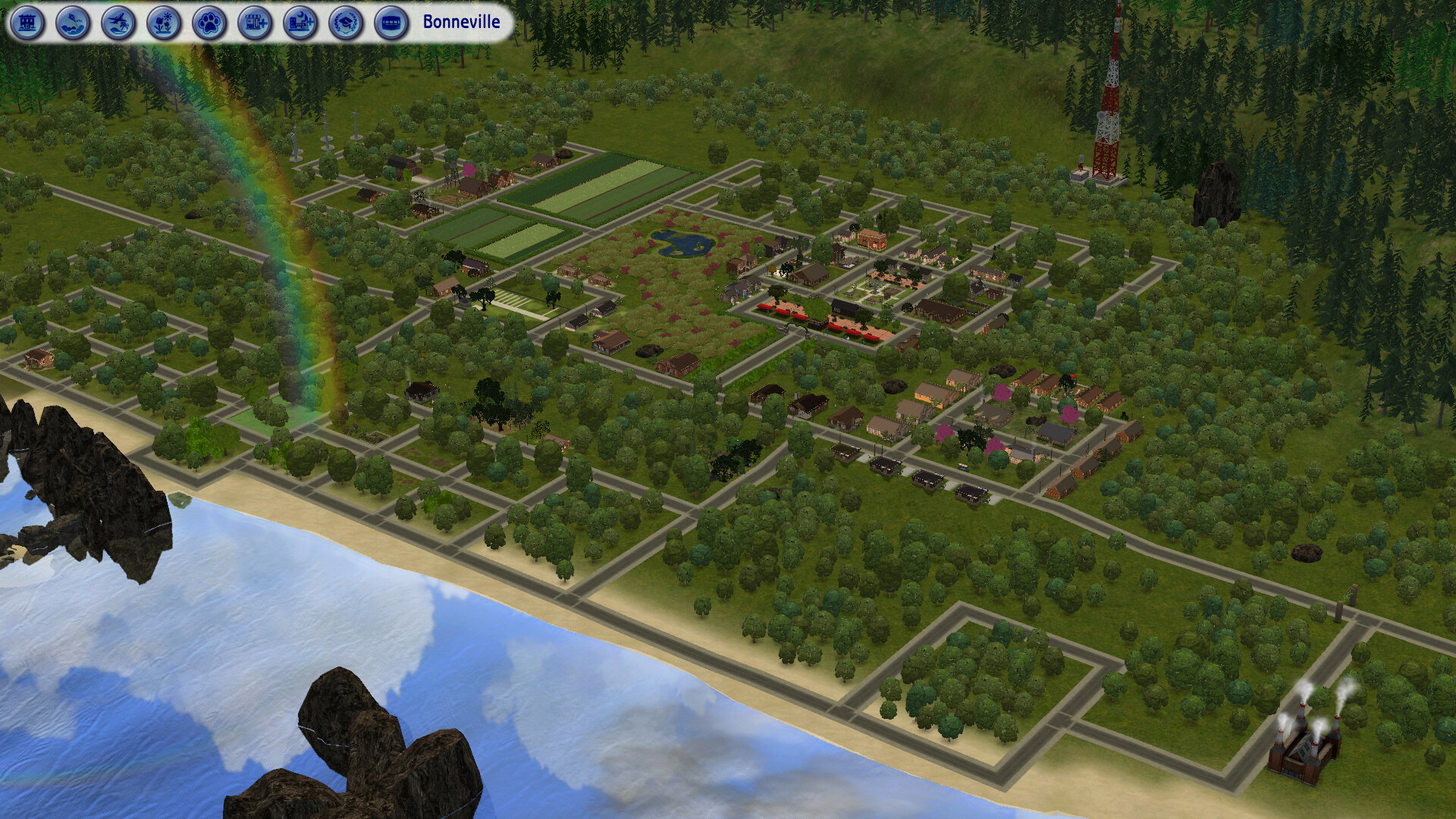 I feel like adding a power plant in my hood. I'm not sure where to put it.
Your thoughts?
Sokisims

@Essa - Do you have the SC4 File for hood? I have wanted a terrain something along these lines, and I keep looking but never find one that I am truly happy with. But love the look of this.
http://thewordssmith.wordpress.com/
Essa For the first time ever, it's summer in Lacuna Delta! You know what that means... Hi, I'm new to the forum (I introduced myself here and graciously simsample invited me to show pictures of my TS2's neighborhood. Unfortunately, I have almost nothing to show, since I'm still learning to decorate (choosing content and rationally managing the downloads folder - trying to contain the compulsion to grab everything I see and pile it up in an infinite and quarrelsome mess). But I can say something about the theme and scheme that I've been sketching in my mind: exactly this compulsion to collect everything.

There is so much wonderful stuff being done by the modder's community, under different themes and representing different times in the history of societies, that it makes me want to try them all at the same time and place. So, I needed something that justifies this surreal setting, such as a time machine piloted by a compulsive collector. And also some purpose for that this entire collection could be useful in a dynamic scenario of some society. This purpose I found in the figure of a pre-capitalist of the nineteenth century, Victorian millionaire and sociopath (vampire, aspiration for wealth and, secondarily, popularity), idealizer of a utopian project to create a society of producing and consuming servants under his government. And his partner, also vintage character but a steampunk inventor-alchemist (witch, a knowledge sim) which brings, in his special vehicle, from various parts of the time what is interesting for the project. Thanks to Phaenon !!! 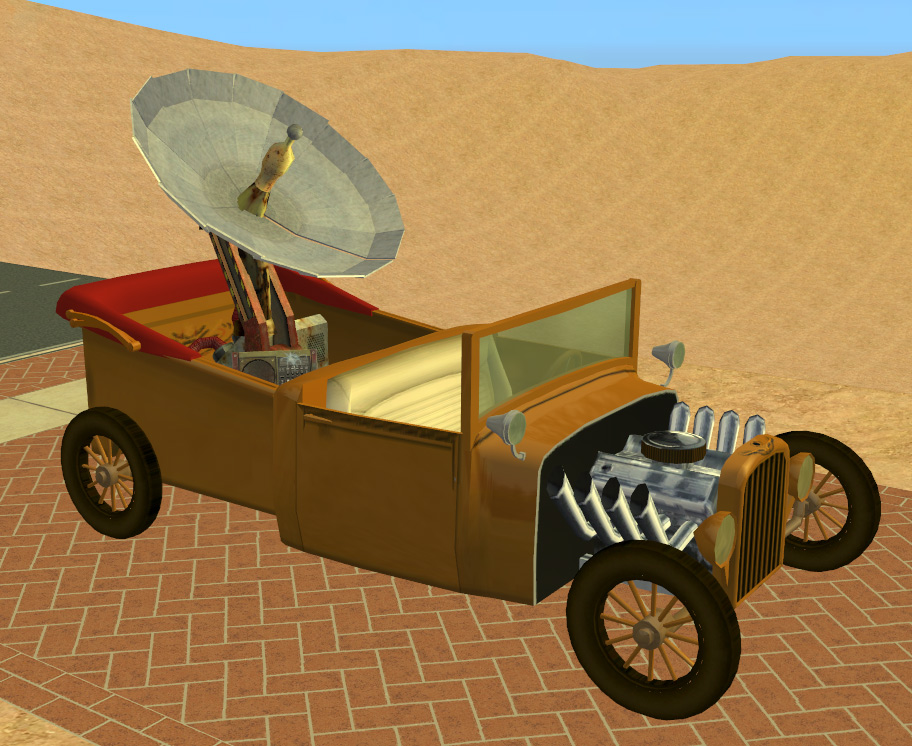 But where will they pile it all up? I chose desert terrain because I don't want to waste time planting trees on a gigantic temperate map. I also avoided the island shape as there is a predominance of the beach, which would frustrate the gloomy atmosphere I intend to give to the theme. The desert is neutral, it allows for the coexistence of contradictory things, even more if the beaches (only two 6x5) are present in an oasis, small and central, and all the buildings are spaced out along a rustic road that goes from nowhere to nowhere. Minimalist and desolate, so that the scenery (albeit beautiful) doesn't steal the attention of the things it's going to hold. Anyone interested in the map, here is the sc4 file , Samsara is the name.

Very cool @Jettha You are going to have a lot of fun collecting custom content for that neighbourhood! I like the terrain, very unusual and I hope you'll keep posting pics of your progress!

Create deserts ... It seems easy because it is where little prevails. But the mistake soon shows itself when the immensity of nothing challenges the little for where it's to be placed. The mountains are gross forms of solid and homogeneous color. They do not accept ornaments. Its imposing discretion require them to be put in a distance. They prerogate themselves as horizon and therefore no additional mountainous horizon is required. Just a Sunset Sky which, although static,, makes a dynamic horizon with a dynamic Skybox. The result is an imperative, sober and broad desert in the sky. Harmonized in an integration of lights, shadows and reflexes.

The land terrain is reddish and the road rustic. From time to time there are some old vehicles mixed with horse drawn ones.

Now, jet's start putting small things in this immensity ....
Back to top