I do have some pictures from before I idiotically deleted all my game saves. So I'll write around those and then write out the rest of what will happen and roll random generators to find out the full extent. It may take a bit but I'll get there eventually. I needed to take a break from sims for a bit cause I was so frustrated that I deleted all my saved games.
Advertisement
DJKanine9
Lab Assistant
Original Poster
#652

MistClan -- Update 1
Ahhh, it's been so long. I missed this challenge very much :,) Thought it might be nice to come back for nostalgia's sake, since Seri! Pixel Biologist said she was considering bringing her own Sims 3 Warrior Cats series back. Gonna have another go perhaps! I think we all know the drill at this point though-- no promises this will be around for long, lol. 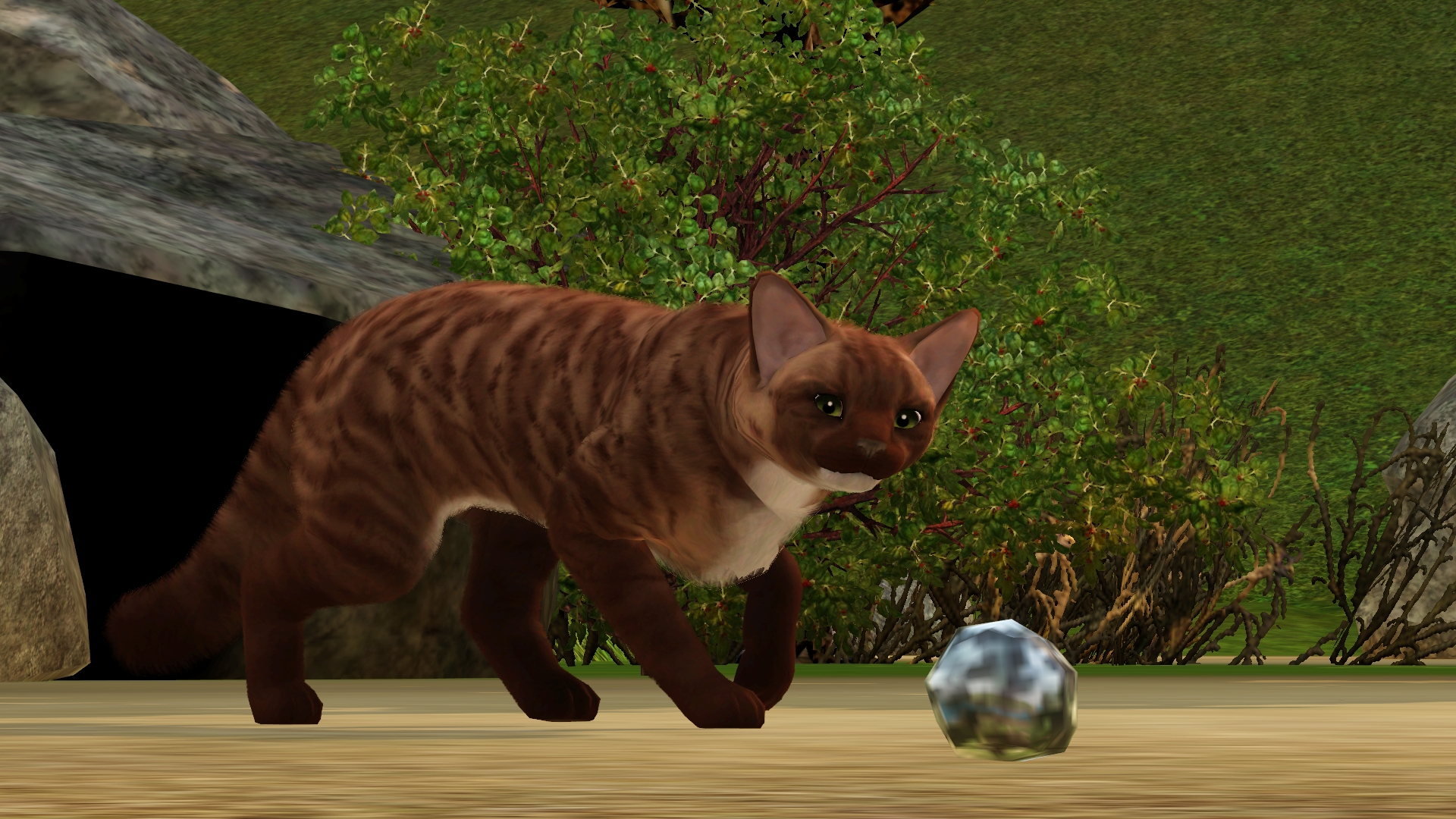 Here's our founder, Lotusbloom! Being the sole survivor of a calamity that wiped out his entire Clan, he has been left behind to pick up the pieces, rebuild the camp in a new place, and revitalize the Clan to the vision of glory that it once was. 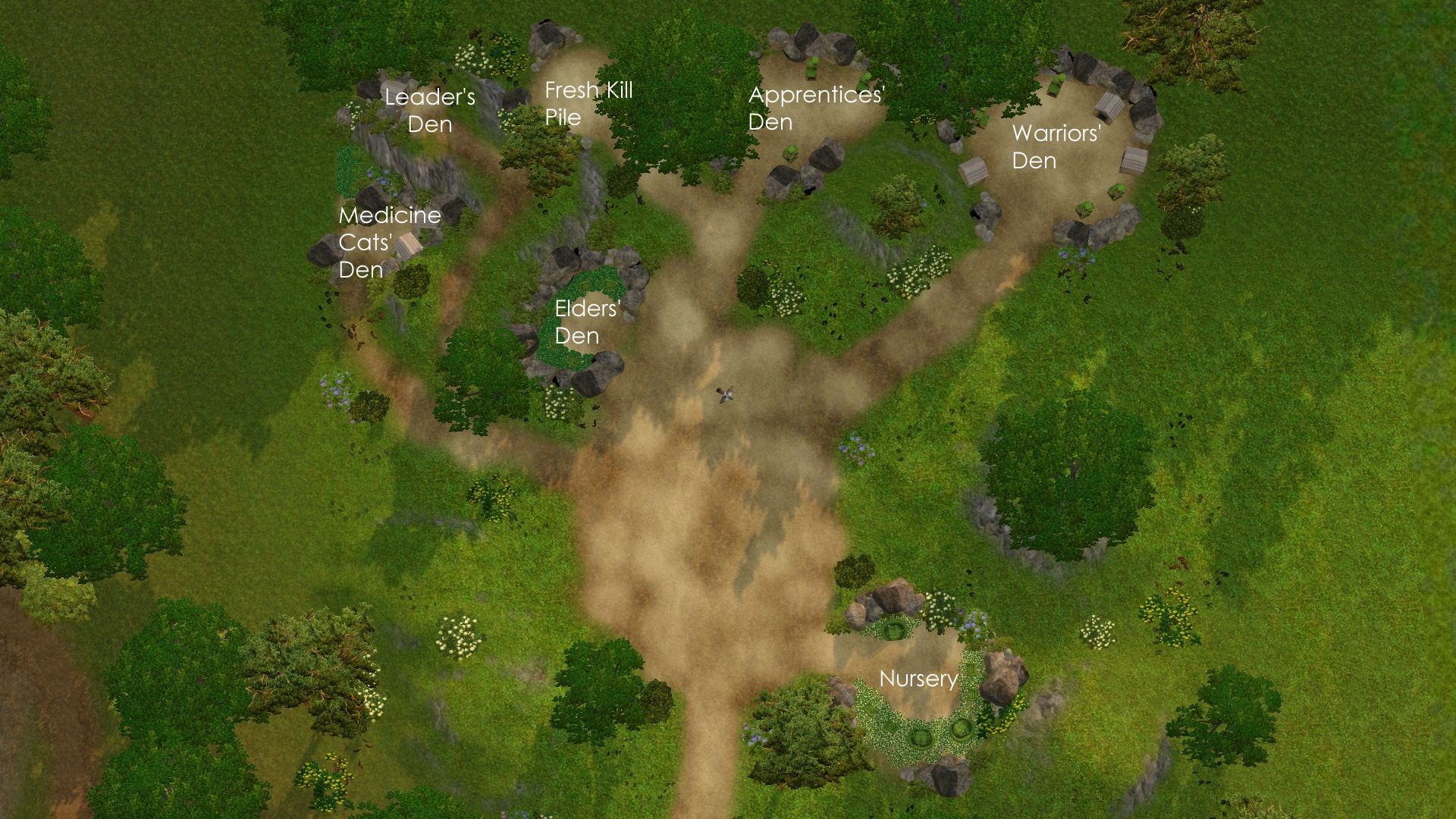 This is the camp! Thought it might be nice to give a bird's eye view and point out all the specific dens. It looks much nicer on ground level though-- I'm actually quite proud of it. 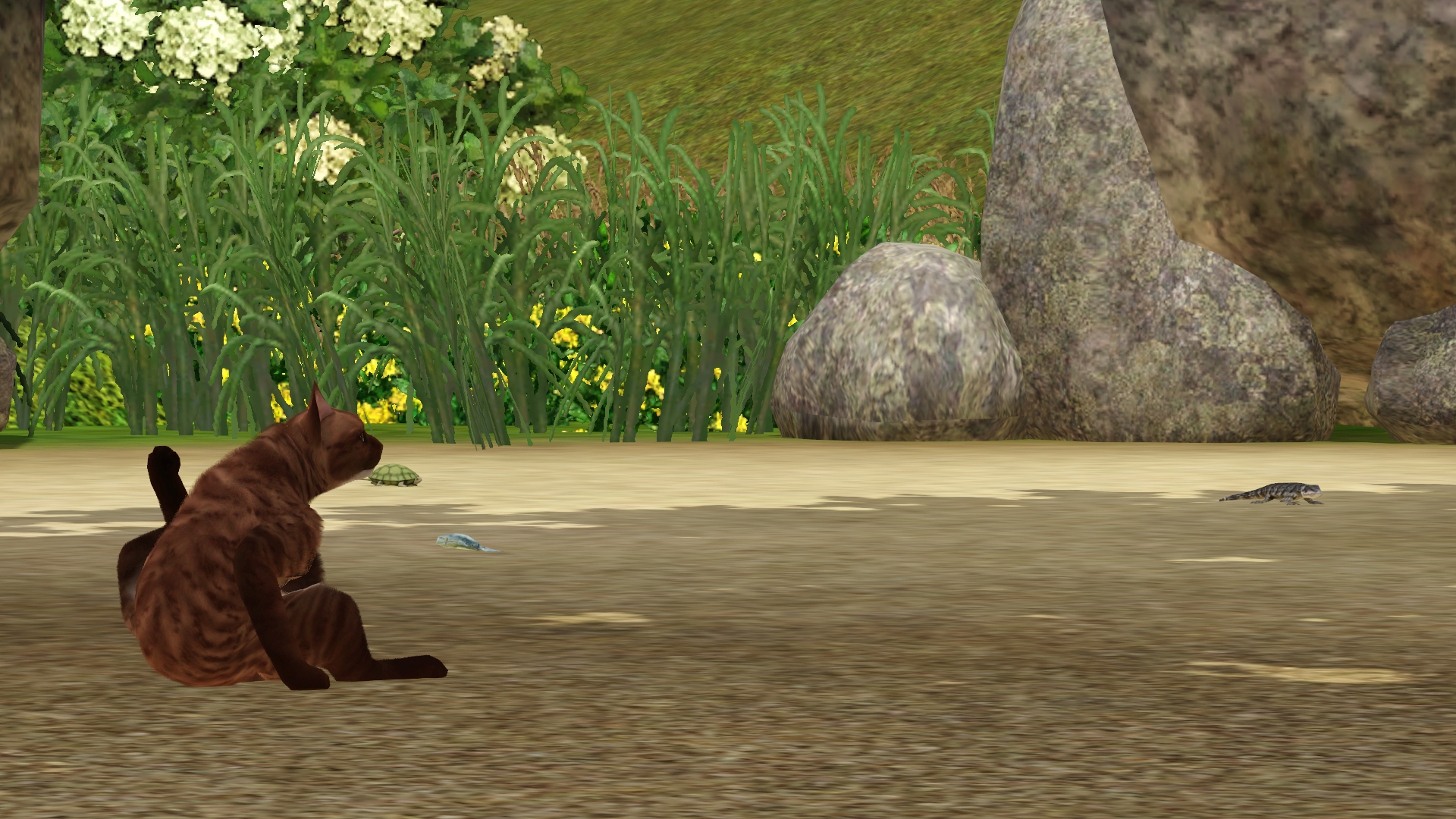 The first day is more or less the usual, run-of-the-mill start for the challenge. Lotusbloom relearns hunting, being completely unused to this terrain, and catching a bit of prey to prepare for the cats that will eventually be sharing this territory with him. 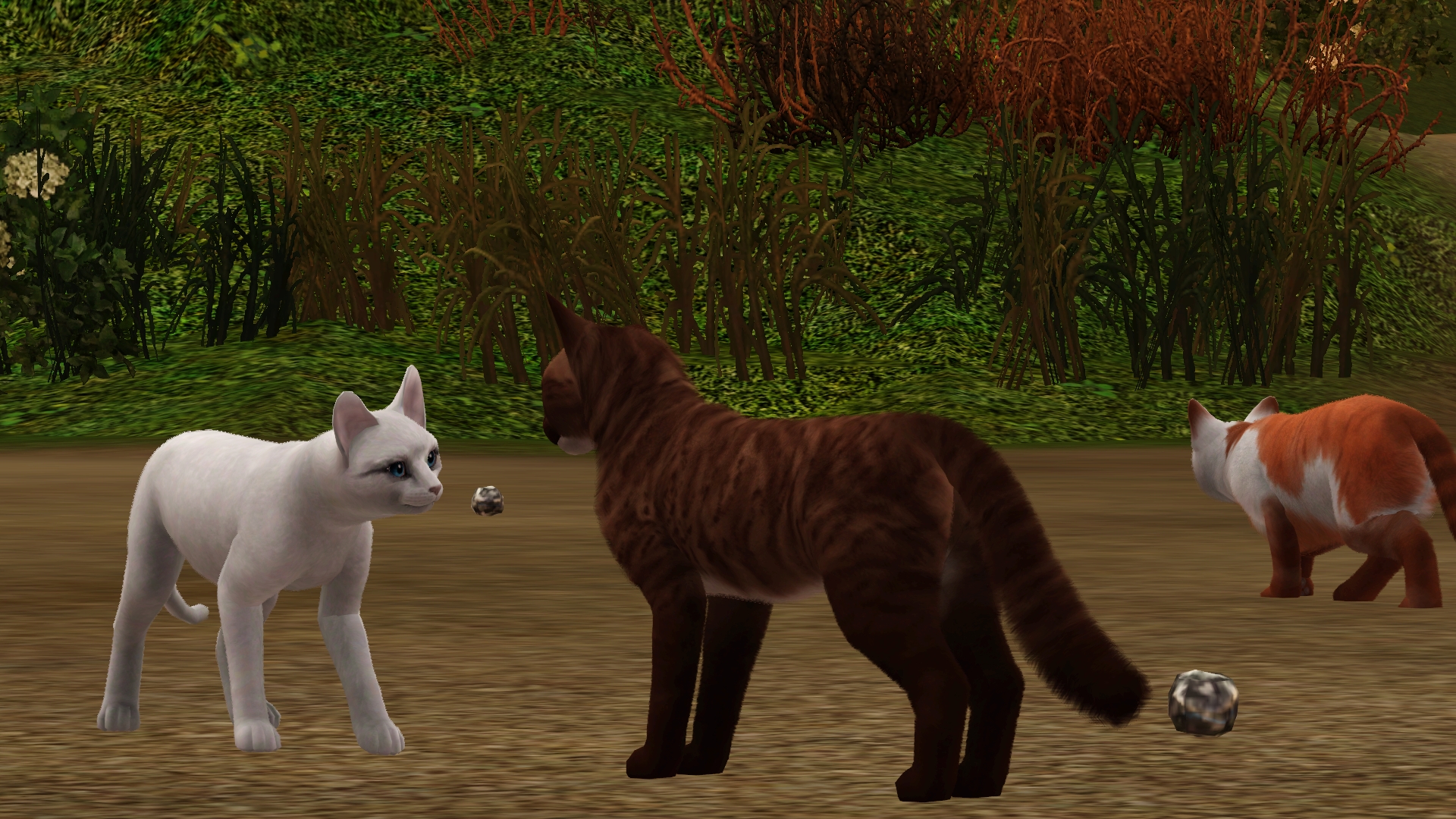 A good move, considering that two rogue she-cats - a pair of littermates named Berry and Miki - decide to pop in for a visit the next morning! Berry is the long-furred one with ginger patches, and Miki is the small white one.

Miki gets along well with Lotusbloom, but Berry doesn't trust him too much. Although, she does take a keen interest in hunting and tries to teach herself when she can. 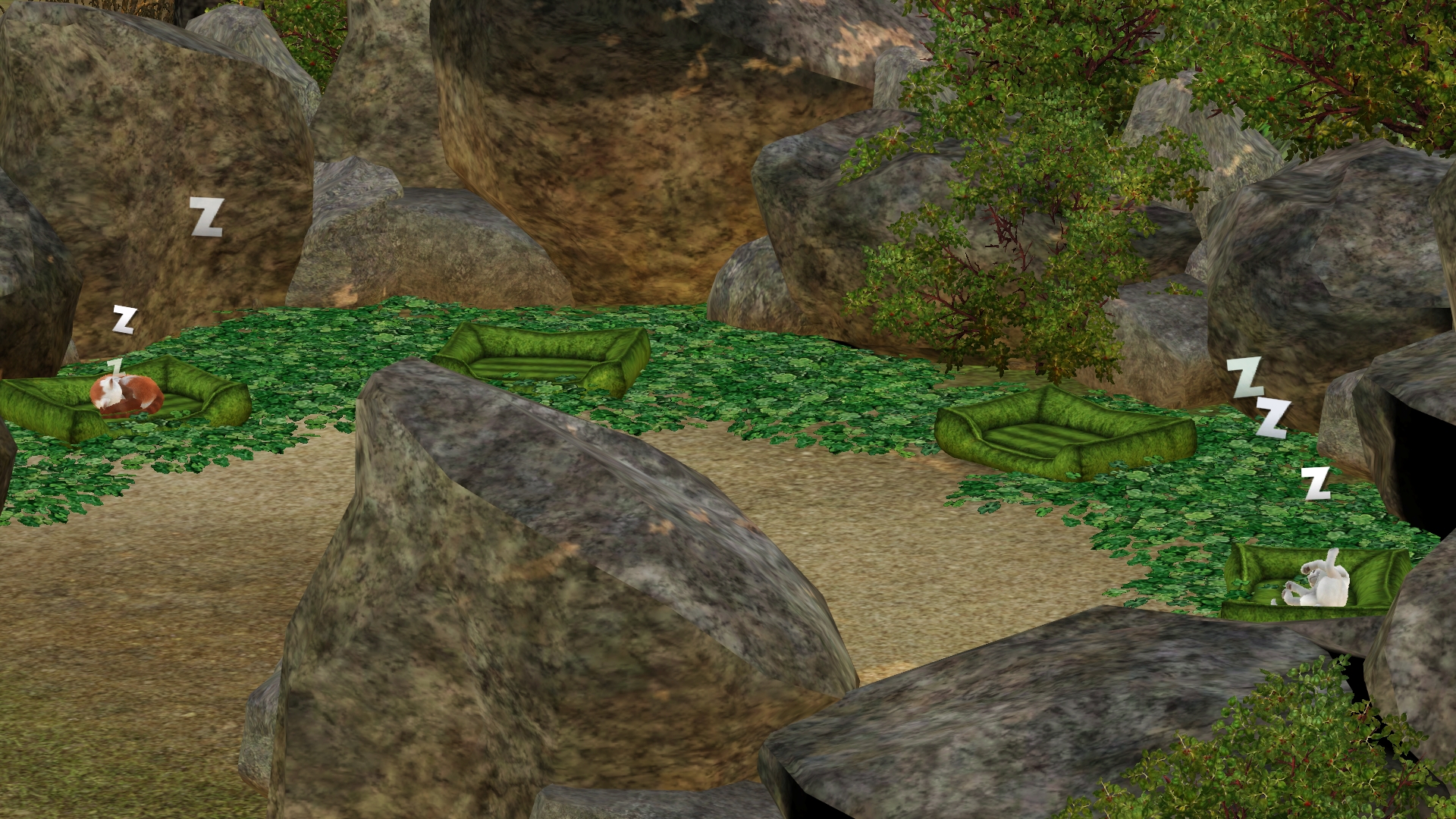 At the end of the day, the two sisters both decide to stay in the Clan for their own reasons, aside from wanting to stay with each other in general. 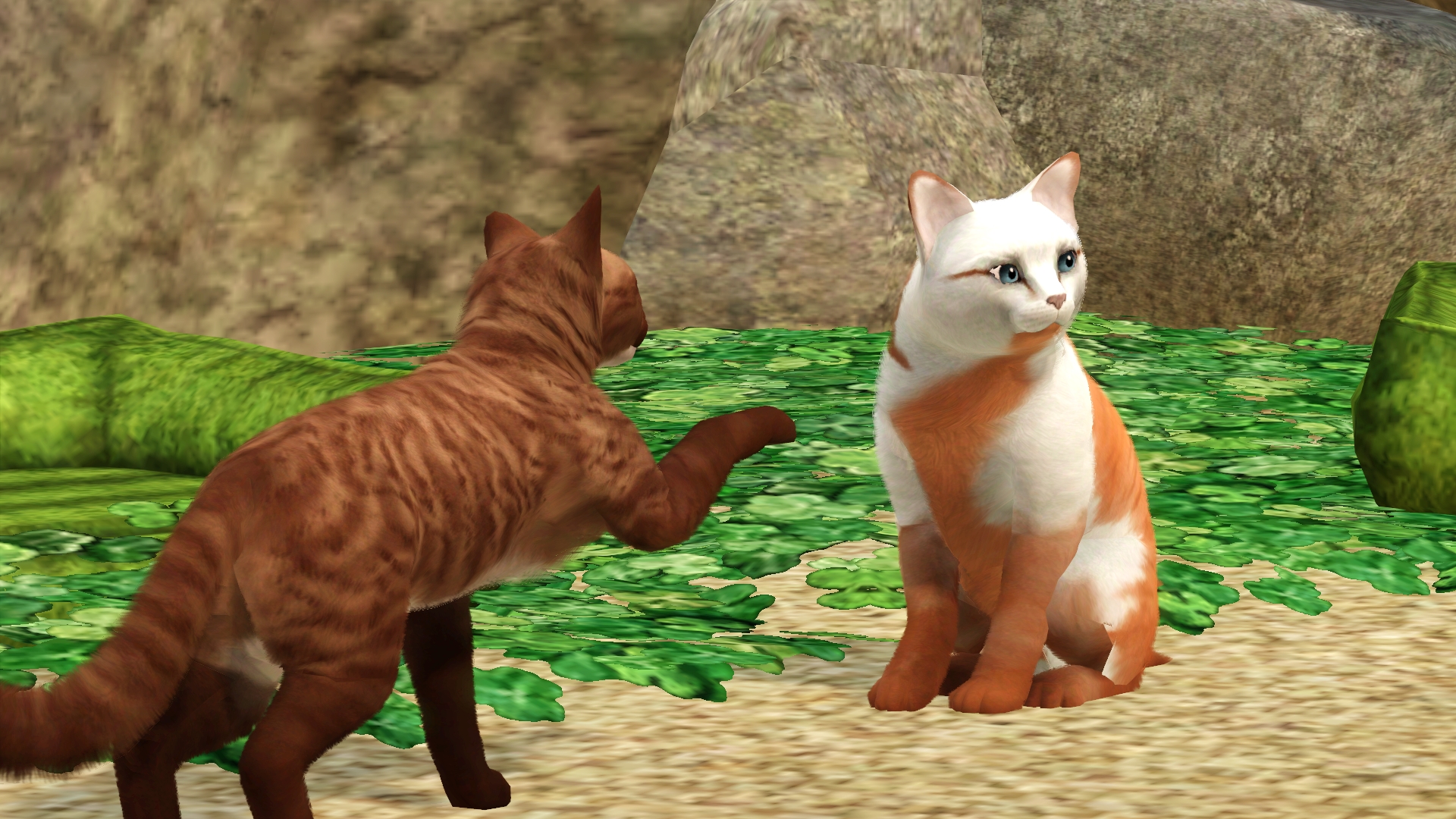 Although Berry still doesn't fully trust him, Lotusbloom helps her out with hunting, teaching her the techniques he knows. It helps her warm up to him a bit-- in fact, they seem to get along better than Lotusbloom and Miki do by the end of it. 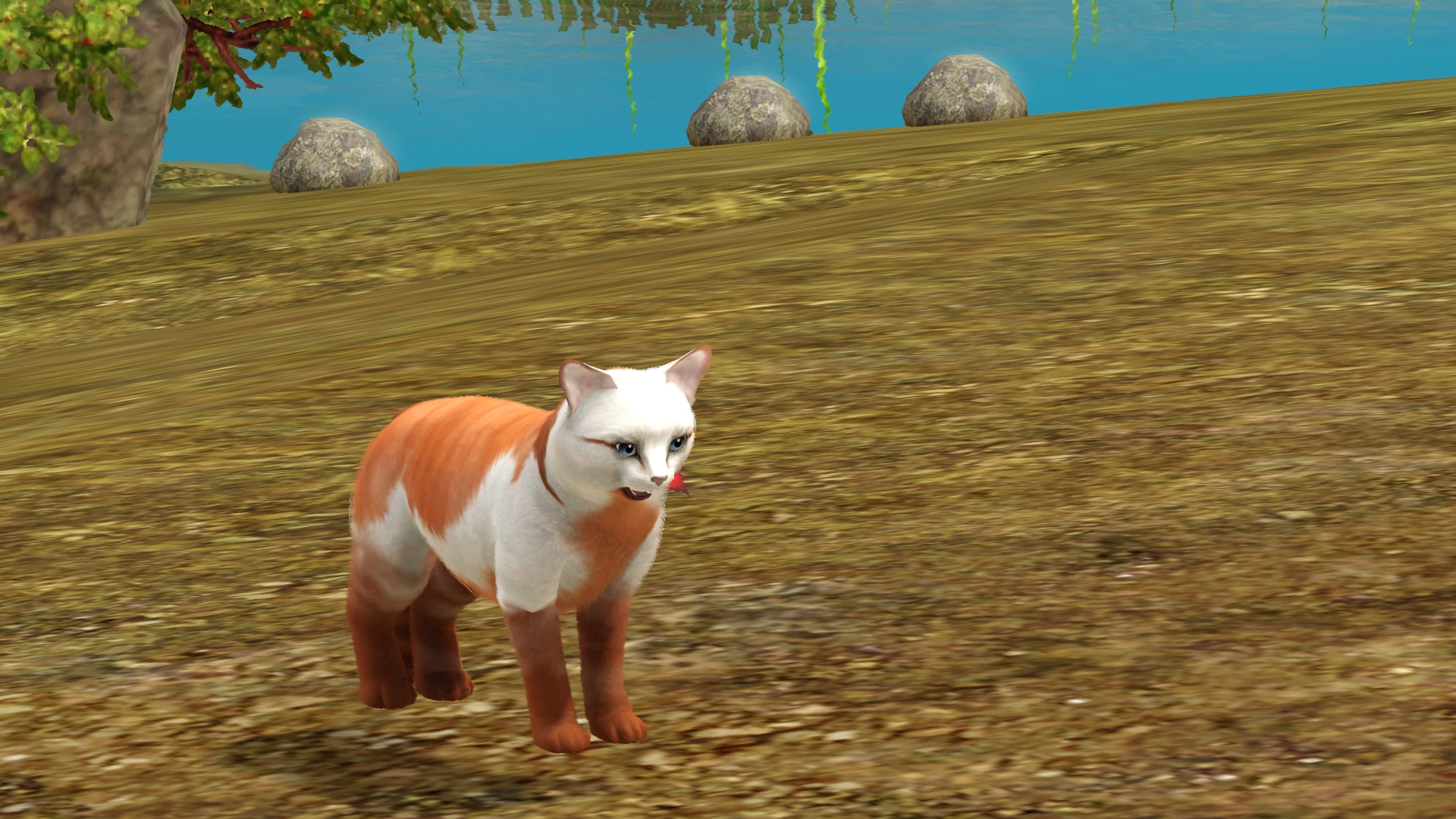 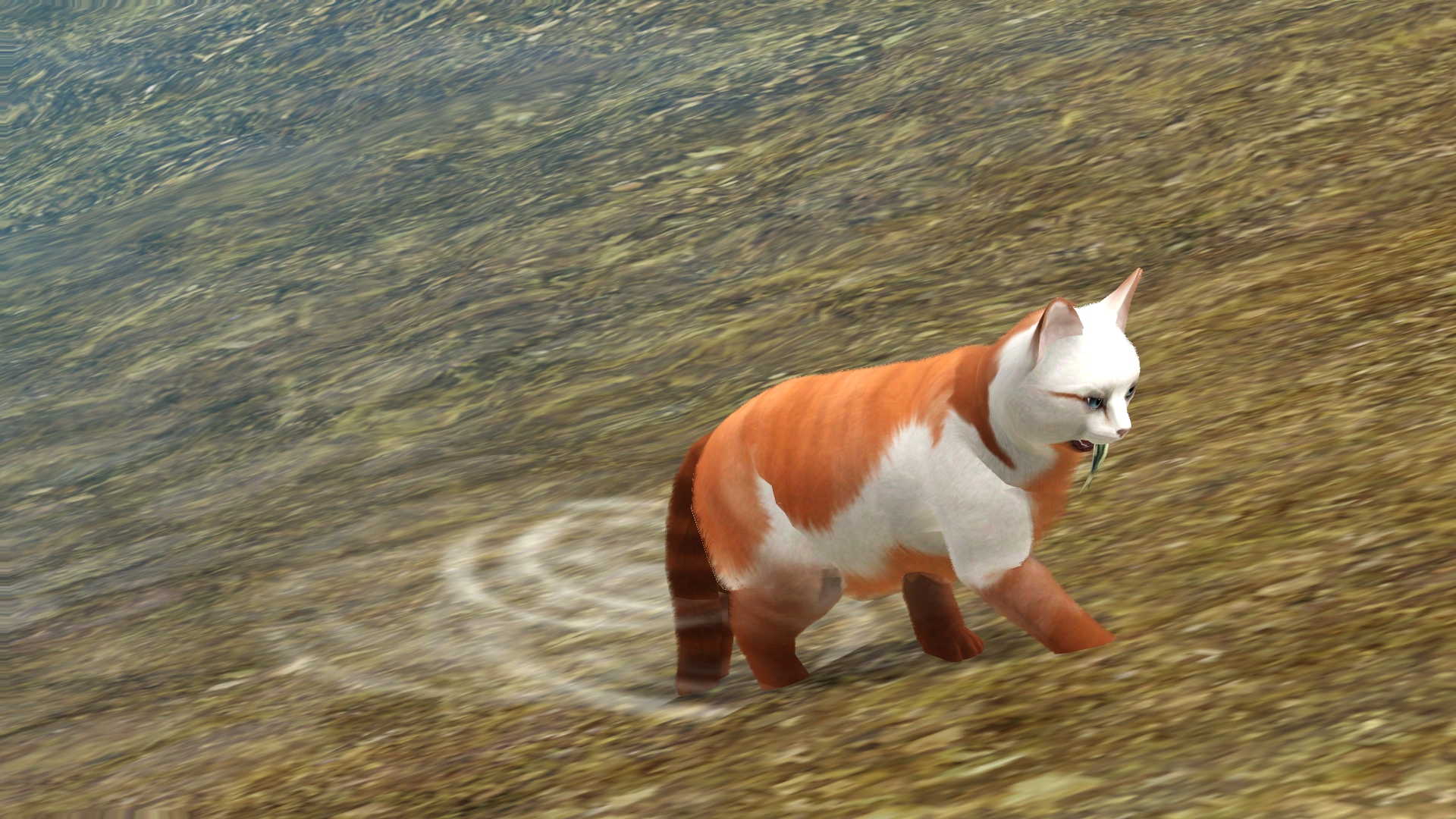 Berry does some actual hunting to test out what she's learned. Unfortunately, she just can't seem to catch land critters... but she scoops fish up with no problems! 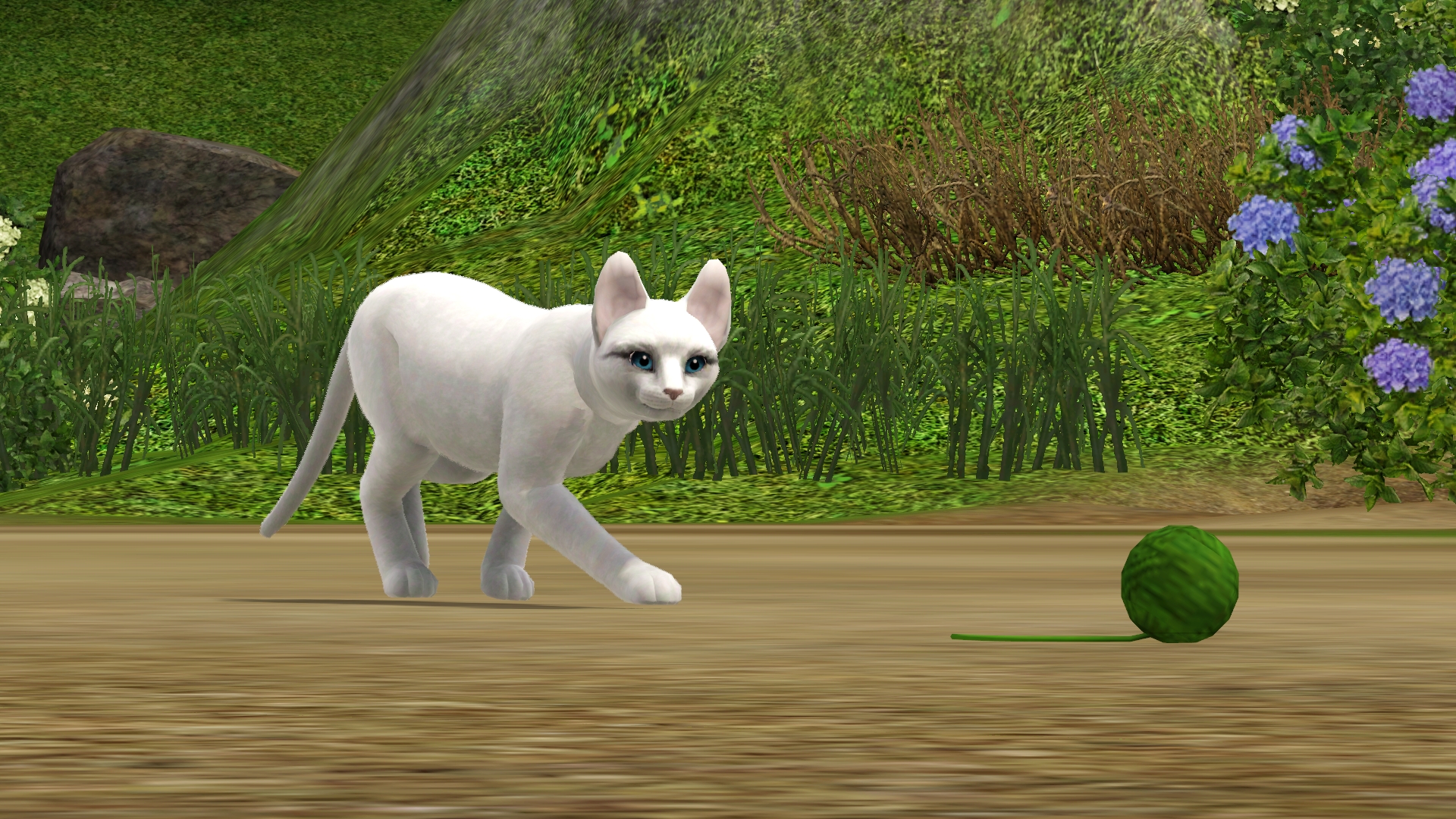 Miki, on the other hand, isn't really much of a fighter. Not even of small critters. She does, however, seem rather interested in herbs. Perhaps a future medicine cat is in the making? 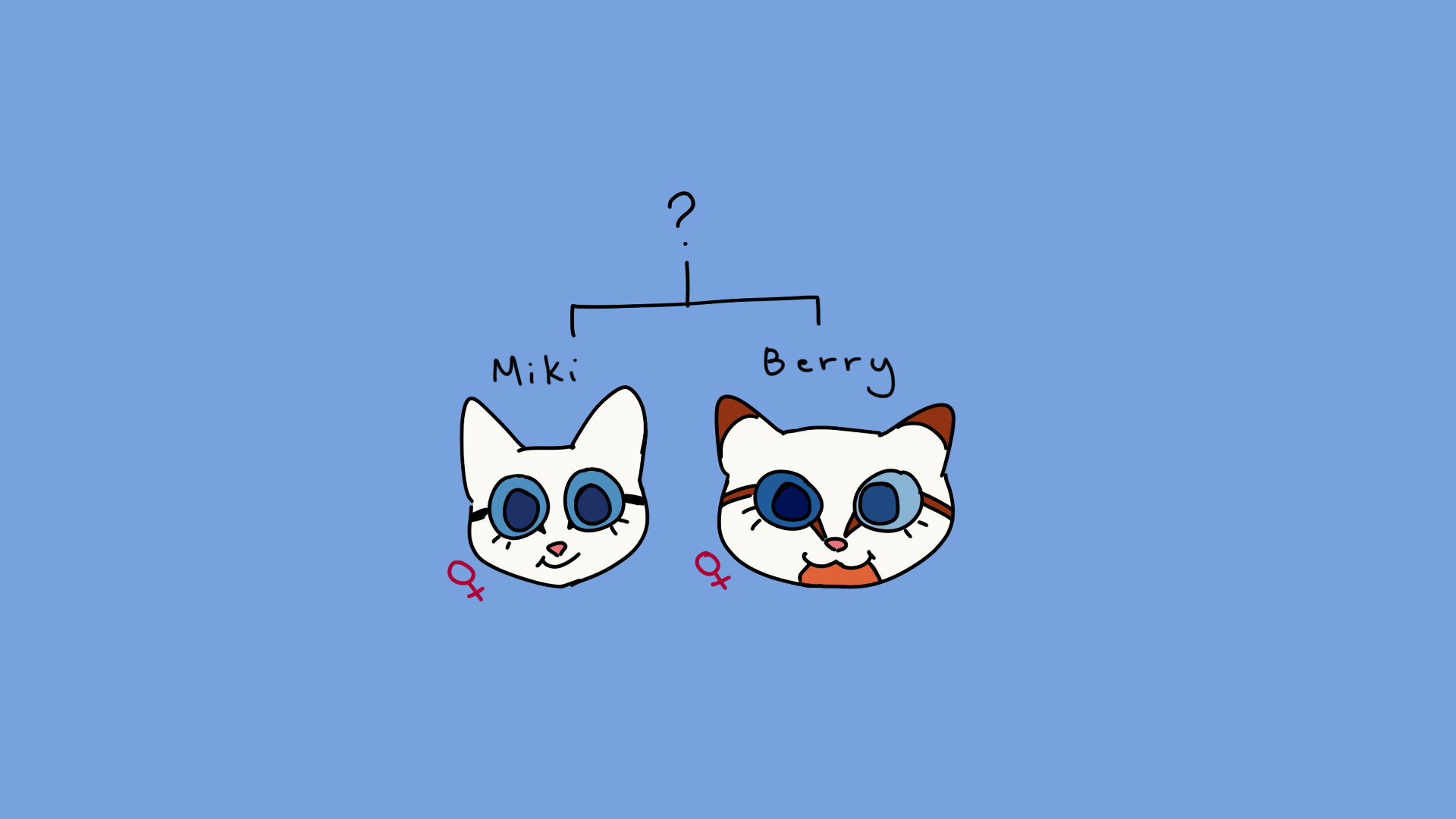 (Hope it's fine with you guys if I use a much simpler, scribblier art style for the family trees. It's just easier for me to draw lol)

Well, not too big of a first update, but it's alright to start small I guess :]
DJKanine9
Lab Assistant
Original Poster
#653

MistClan -- Update 1: THE GREAT RETCON
Okay so I'm restarting-- but not in the usual way. It's gonna be same cats in the world, same exact territory, etc. etc. but I'm changing one thing: I'm starting them as apprentices.

It was starting to bother me that they were warriors, and yet had JUST started adulthood with no hunting skill to their name. But I also didn't want to cheat by having my founder cat start off immediately with hunting skill (also it would've been bothersome to set all of them older, considering I have TWENTY FOUR ROGUES in the neighborhood to start). Hence: apprentice start.

This also makes things a bit more structured for me regarding the early game! The Clan will become truly official once there are five cats settled into the group, and all cats have at LEAST Level 3 Hunting or Fishing (I got a mod) skill.

There will also be a three-day grace period in which I will not roll any random generators aside from the ones that dictate rogue visitors and new recruits to the Clan. It is only fair, since they're all, well... apprentices. 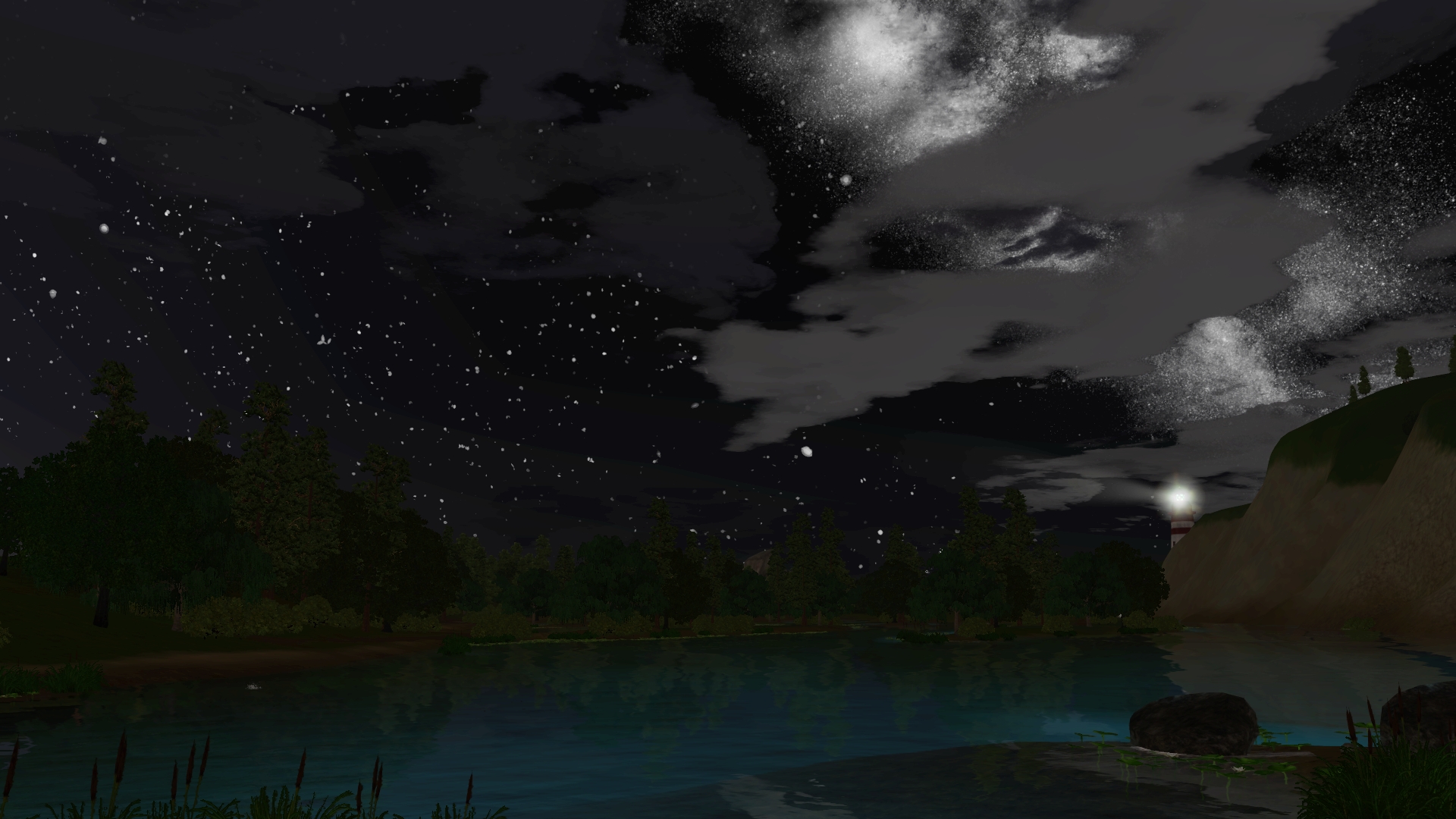 Harsh coughs and hacks shake Lotuspaw's body as he crawls out onto the muddy bank, fur sopping wet and hanging pathetically off of his trembling frame. The young tom shudders and expells the last of the lake water from his lungs, eyes watering and throat burning.

He takes in a much-needed gulp of air, then another. And another.

The apprentice's legs give out beneath him. He can't bring them to move no matter how he wills them to, and in spite of Greenleaf's warmth keeping its hold on the night breeze, his drenched pelt sends a chill through his body.

Shivering and alone, he can't help thinking back to the safe, compact warmth of the apprentices' den, where at the end of every busy day, he'd curled up next to his denmates. Back to whispered exchanges of gossip and planned mischief, schemes which the warriors would always end up thwarting the next day with amusement. Back to the knowing gazes of his parents and the patient instructions of his mentor.

He'd fantasized since kithood about an adventure where he stakes out into the night alone, doing something glorious for which his Clanmates would hail him as a hero. But now that he really is alone, he wants nothing more than to hear their teasing about it. Even just once more.

...now just a lonely kit shivering in the night, he wails his grief into the wind and the unfamiliar trees that surround him. 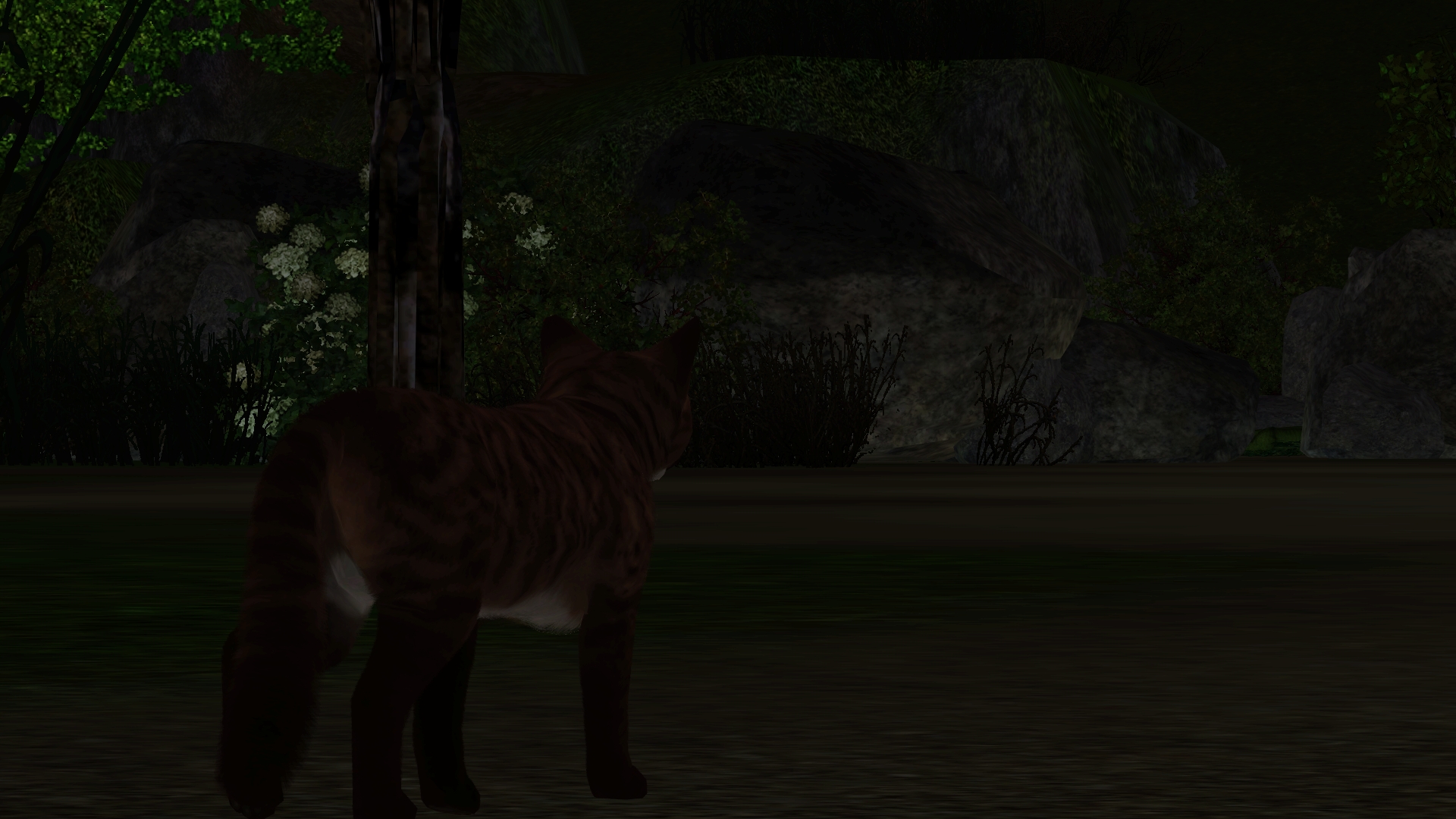 It takes a while for him to let out all that he currently can. Even after that, Lotuspaw doesn't feel that much better... nevertheless, it's at least enough to get him back onto his paws.

He knows he can't stay there all night. Even if he managed to fall asleep in spite of the wet and cold and even if it didn't end up giving him an illness, he didn't doubt that something must've heard him. And he'd just narrowly escaped drowning in a river-- it would just be a waste of his efforts to get snatched up by an owl or a coyote now. So with a heavy sigh, he trudges onward and away from the water. Mist billows around him, obscuring much of the area... if he had the strength to be skittish about anything lying behind that mist, he would've been.

That being said, however, it catches his attention when something odd happens.

The mist parts, revealing a way between the trees. Rays of moonlight dapple the path forward, and in shock, Lotuspaw looks owlishly up towards the night sky. The clouds that once swarmed below Silverpelt and obstructed it from view are gone.

Are you watching over me...? he silently asks his Clanmates as he hesitantly steps forth. 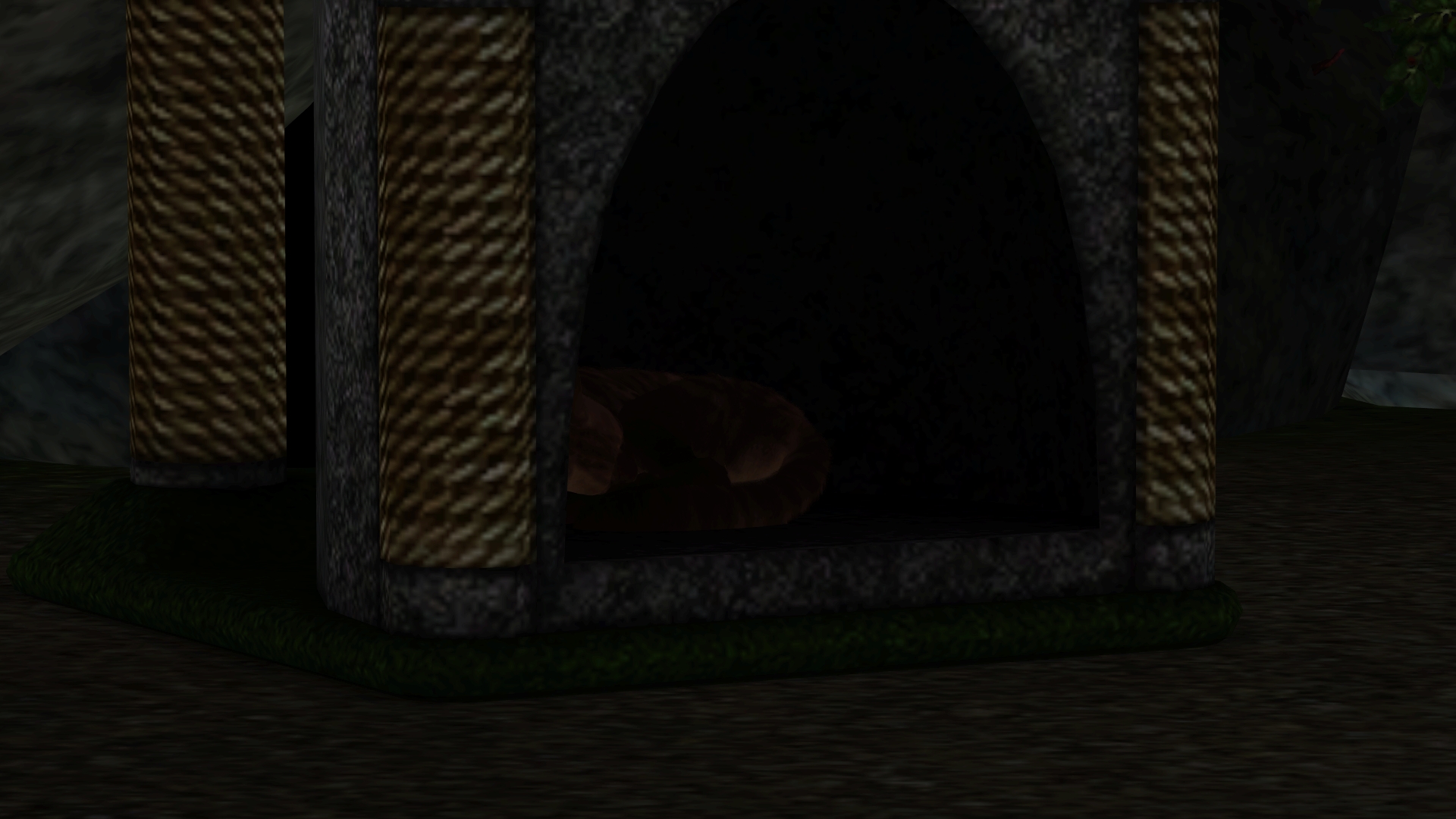 He comes across a moonlit clearing with dry ground, bushes and small trees and crevices galore surrounding him. All good places to take shelter for the night, it looks like.

Squeezing into one of the tiny, moss-lined caverns, he notes absentmindedly how perfect this place would be for a camp as he curls up and starts to feel drowsiness tugging at his senses. It's warm inside... no wind to buffet his damp pelt, and a speckling of moss and leaves across the floor to cushion the rough stone.

Before he knows it, he's drifting comfortably off to sleep... 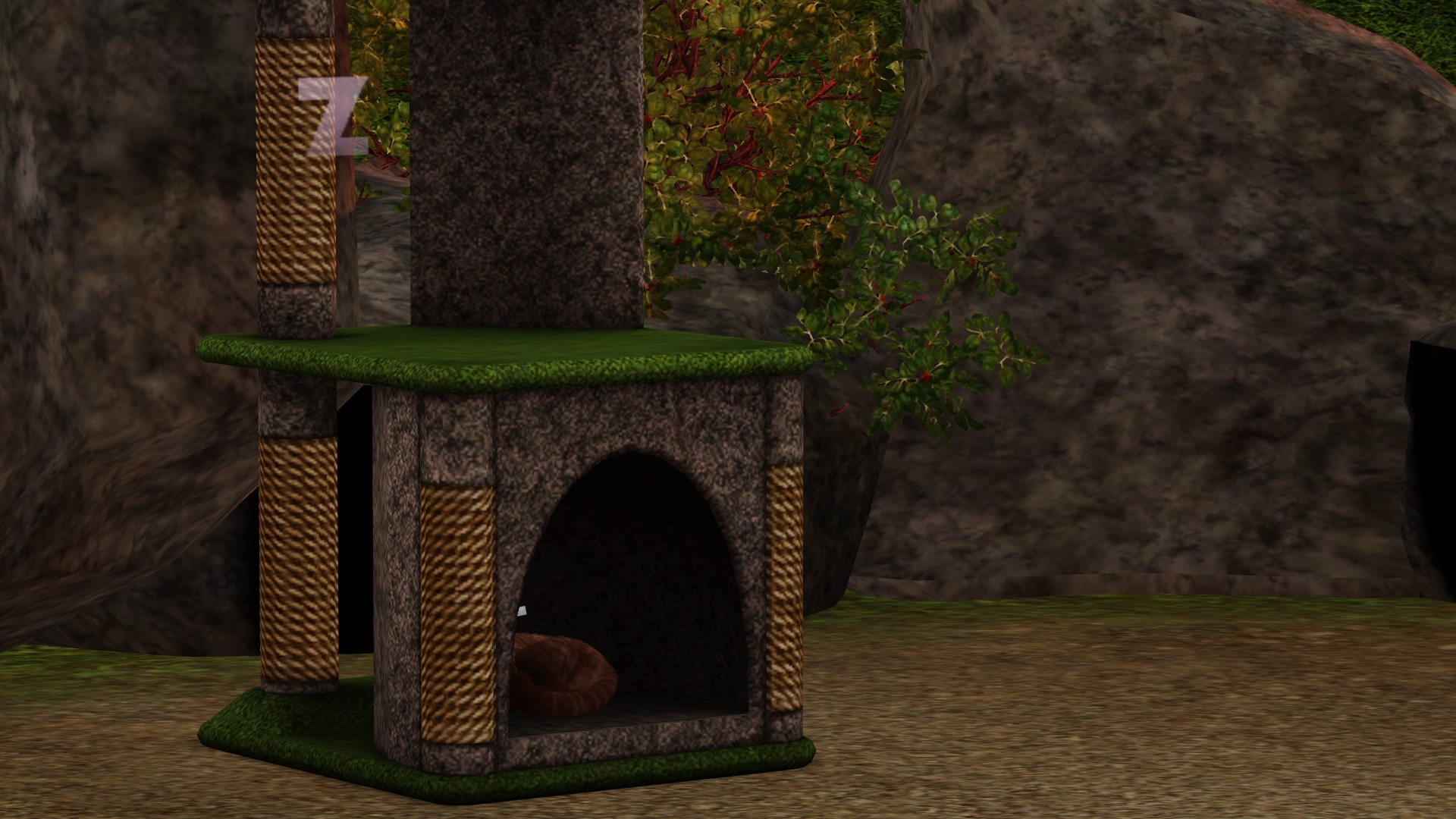 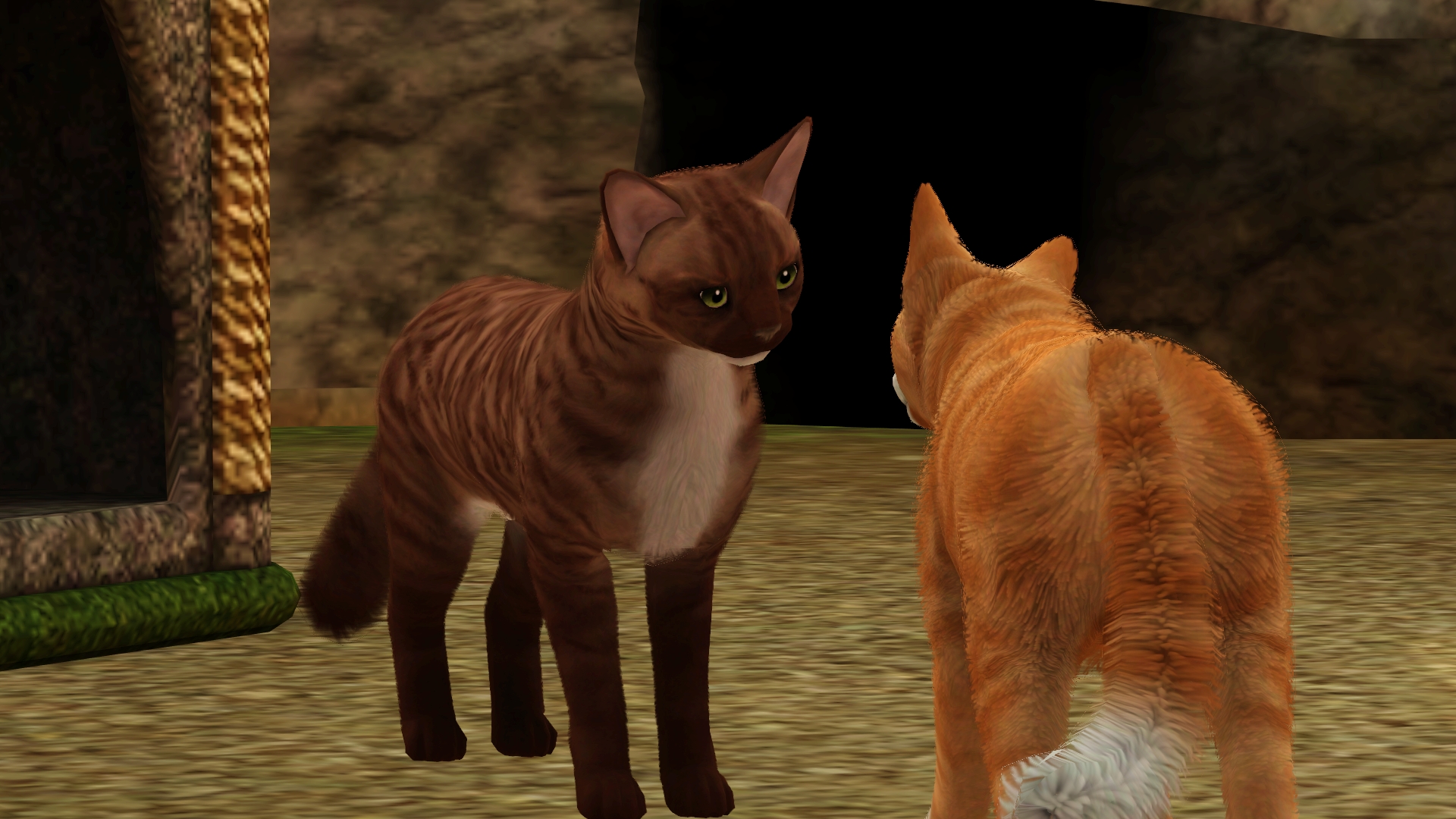 Lotuspaw wakes up to the sound of pawsteps and an unfamiliar cat scent.

With a startled shriek, the apprentice scrambles to his paws and puffs himself up reflexively. The stranger that stands before him - a tall, bright ginger tom, seemingly around his age - looks less intimidated than he does inquisitive.

"Who are you?" the smaller cat tries to sound tough, puffing up his (thankfully now dry) fur. "This-- I found this place first! It's mine!"

"Uh... sorry to intrude then, I guess?" the ginger tom looks awkwardly down at him. "I was just walking around for some peace and quiet. Twolegplace has been getting stuffy lately... too much competition over the pellets, you know."

"What's that supposed to mean?" Lotuspaw wrinkles his nose and inches back as the other cat leans forward to sniff him.

Golden eyes blink curiously. "Ah. So, you're new here then. Weird... you don't have even a hint of Twoleg on you. Do you catch all your food?"

"Uhh. Yeah? Why would I ever let a Twoleg give me food?" he asks, the question half genuine and half snarky. His pride doesn't allow him to mention that he hasn't yet even learned how to hunt properly-- he'd been an apprentice for less than a moon. 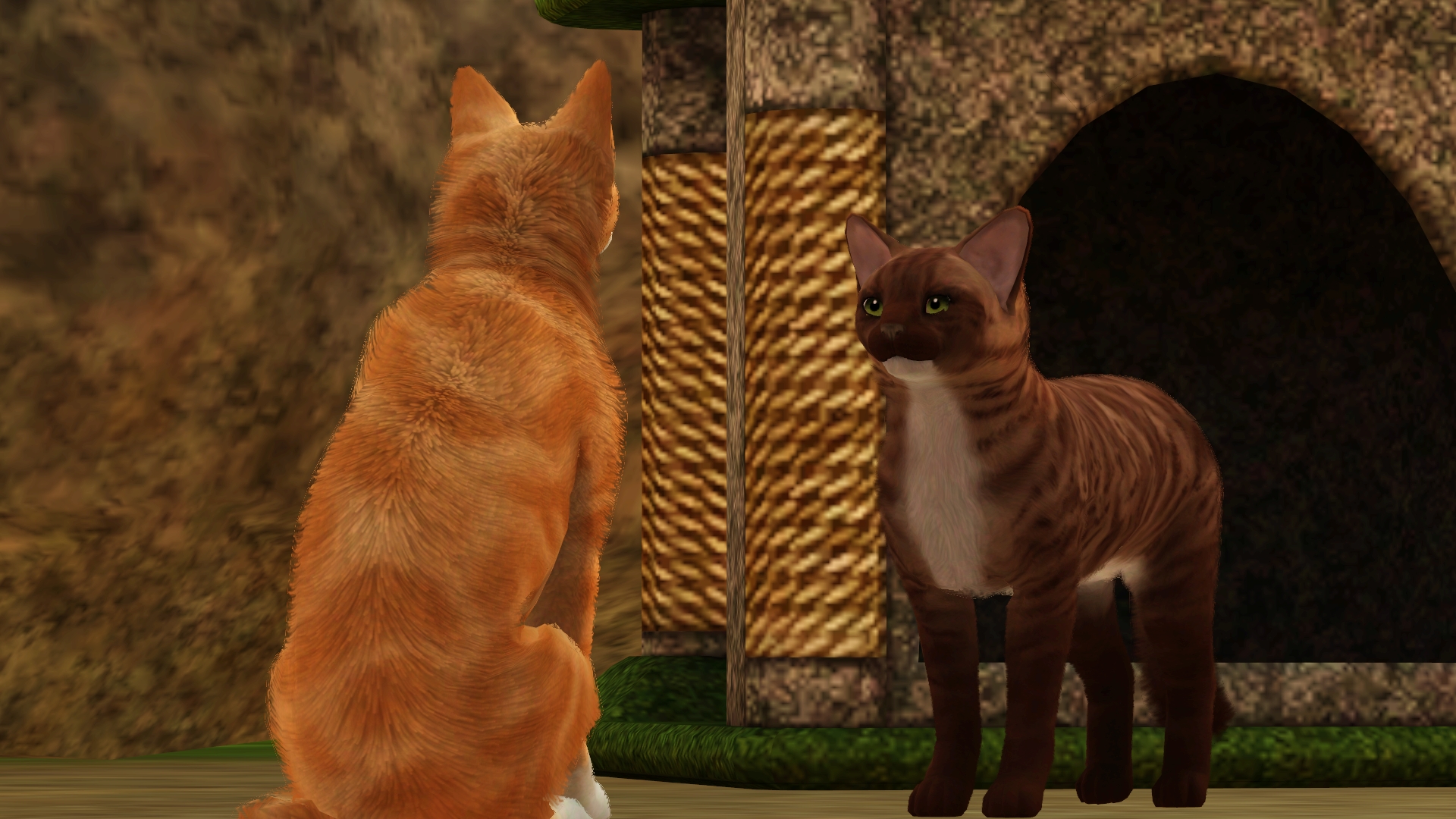 The other cat draws back and sits down, calmly swiping a tongue over his paw and drawing it over his ear. Somewhat pacified, Lotuspaw reluctantly allows the fur on his back to settle flat.

"Honestly, I'm kind of jealous. I'd like to learn how to hunt, but no-one around knows either." the stranger remarks. "All of the older cats just chase everyone away from the first servings of food and then leave the leftover scraps. You'd think getting fed by Twolegs would be easy, but... well. No one around here is getting any more willing to share, and I don't blame em. There used to be plenty. But most of the Twolegs who gave us food before went way down the Thunderpath in their monsters, and they haven't returned since... now, there's just not enough for all of us."

Blinking, the smaller cat looks around the area, the place much clearer in the daytime. He can hear scuttling in the undergrowth and smell birds and rodents in the trees. This place... it'd be great for hunting.

"What... you want me to teach you or something?"

Lotuspaw's gaze swivels back to the other tabby. Having lived in a Clan his whole life, he admittedly really doesn't like the thought of being alone... but was he really willing to fraternize with a pellet-eating rogue, of all cats?

He thinks over it for a moment, and eventually his better judgement wins out against his prejudice.

"... you know what? Fine. It's not like I can keep this whole area to myself, anyways." he sighs, brushing past the tom and padding out into the clearing. "I'm Lotuspaw, by the way. And you are?"

"Boris." the rogue's eyes widen slightly, likely not having expected an actual yes. He pads after the apprentice. "So, how do you hunt?"

PHEW.... that was a lot to write. Anyways, onto some extra pictures and mini updates! 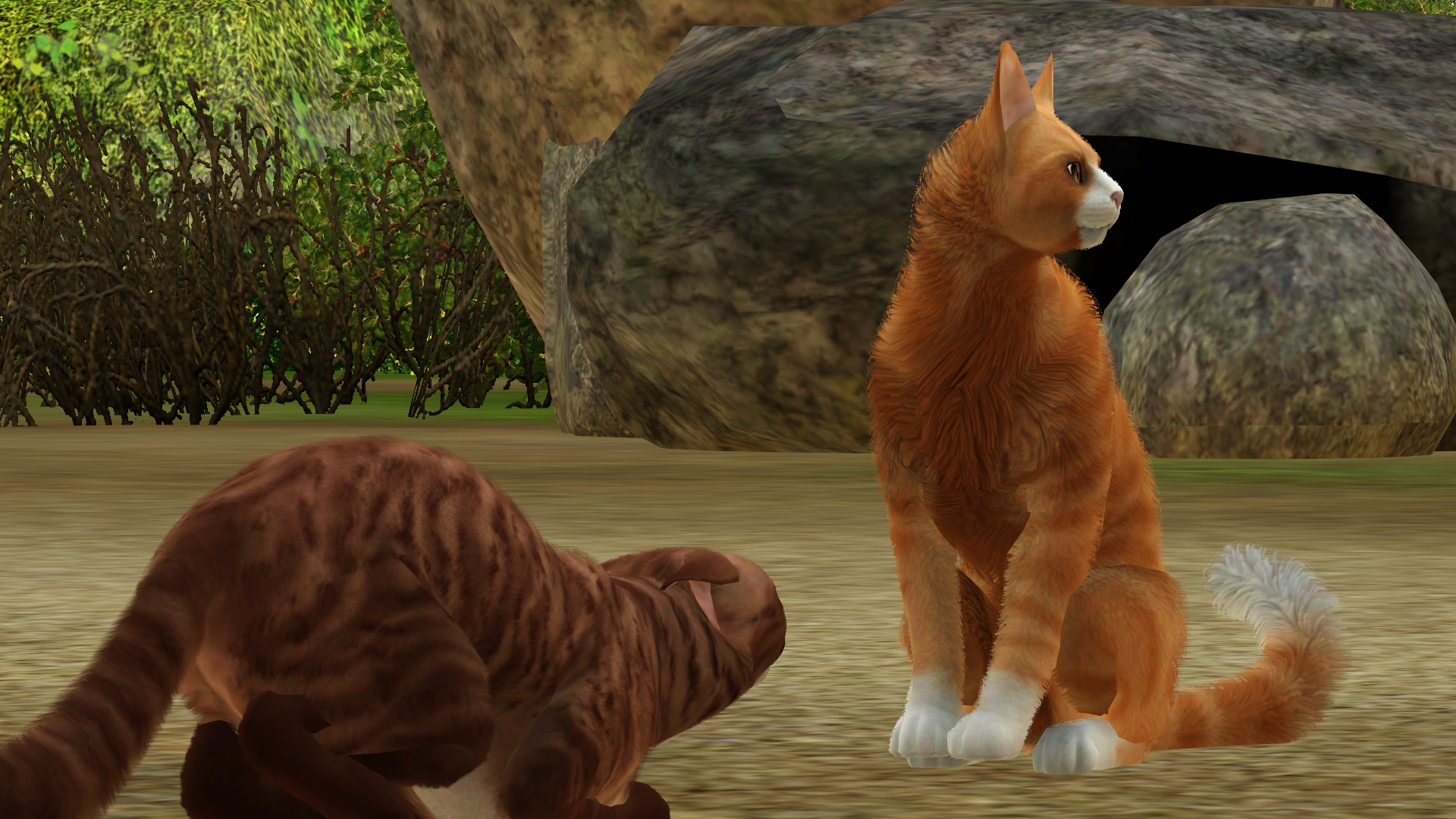 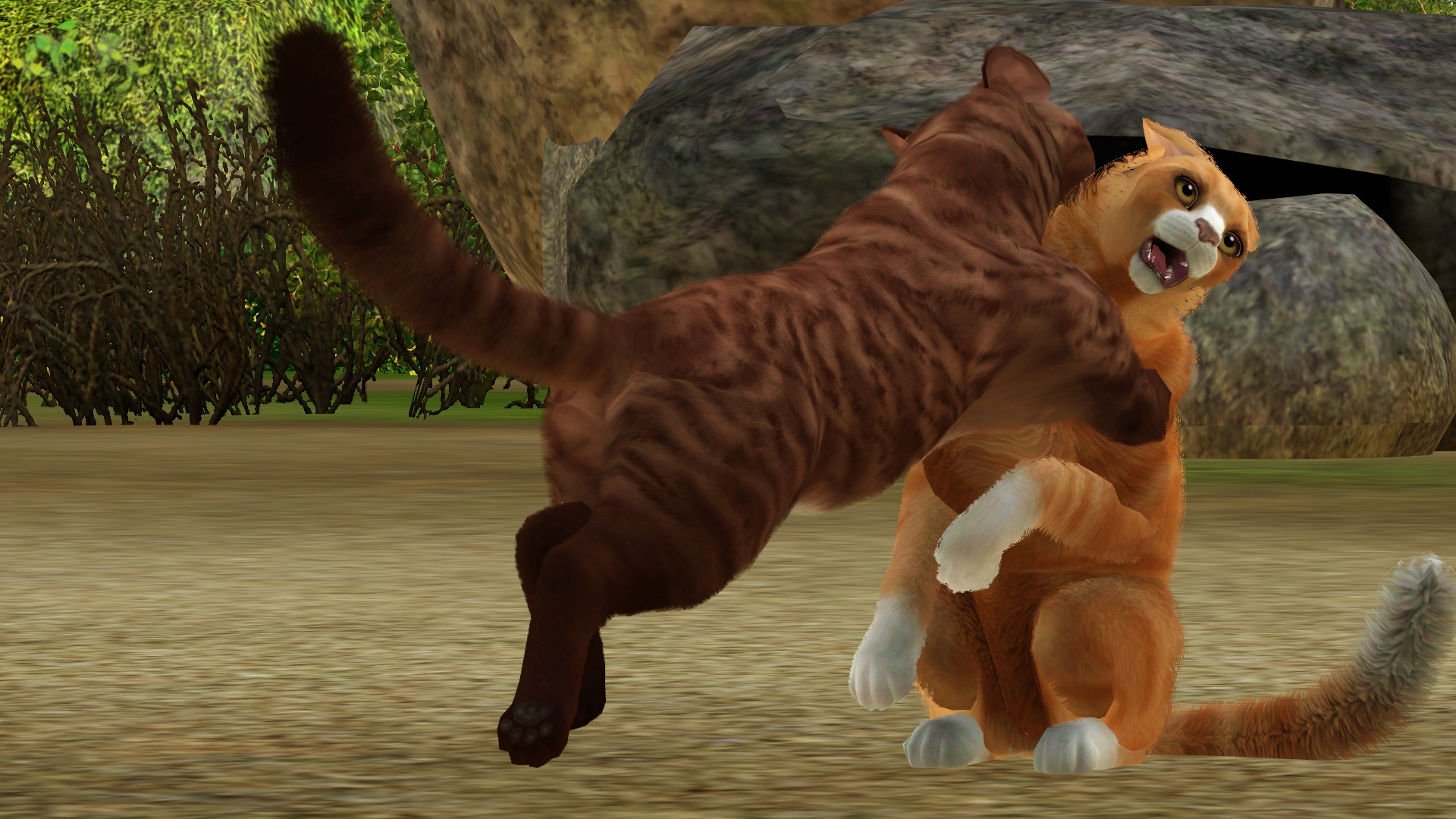 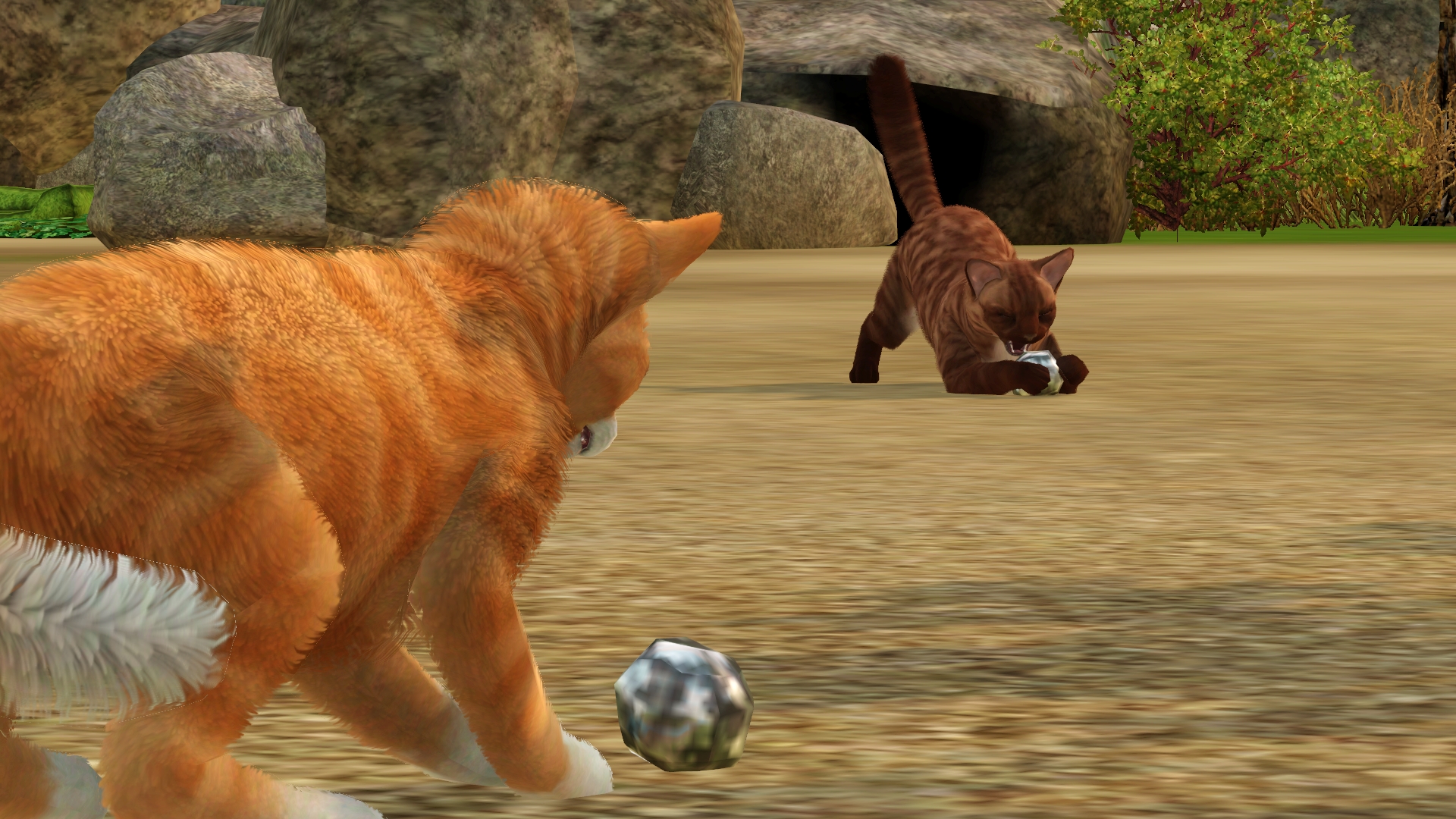 One of the first things Lotuspaw gets to is teaching Boris how to hunt! Which is a bit interesting, considering he doesn't fully know himself... they eventually figure it out, though. 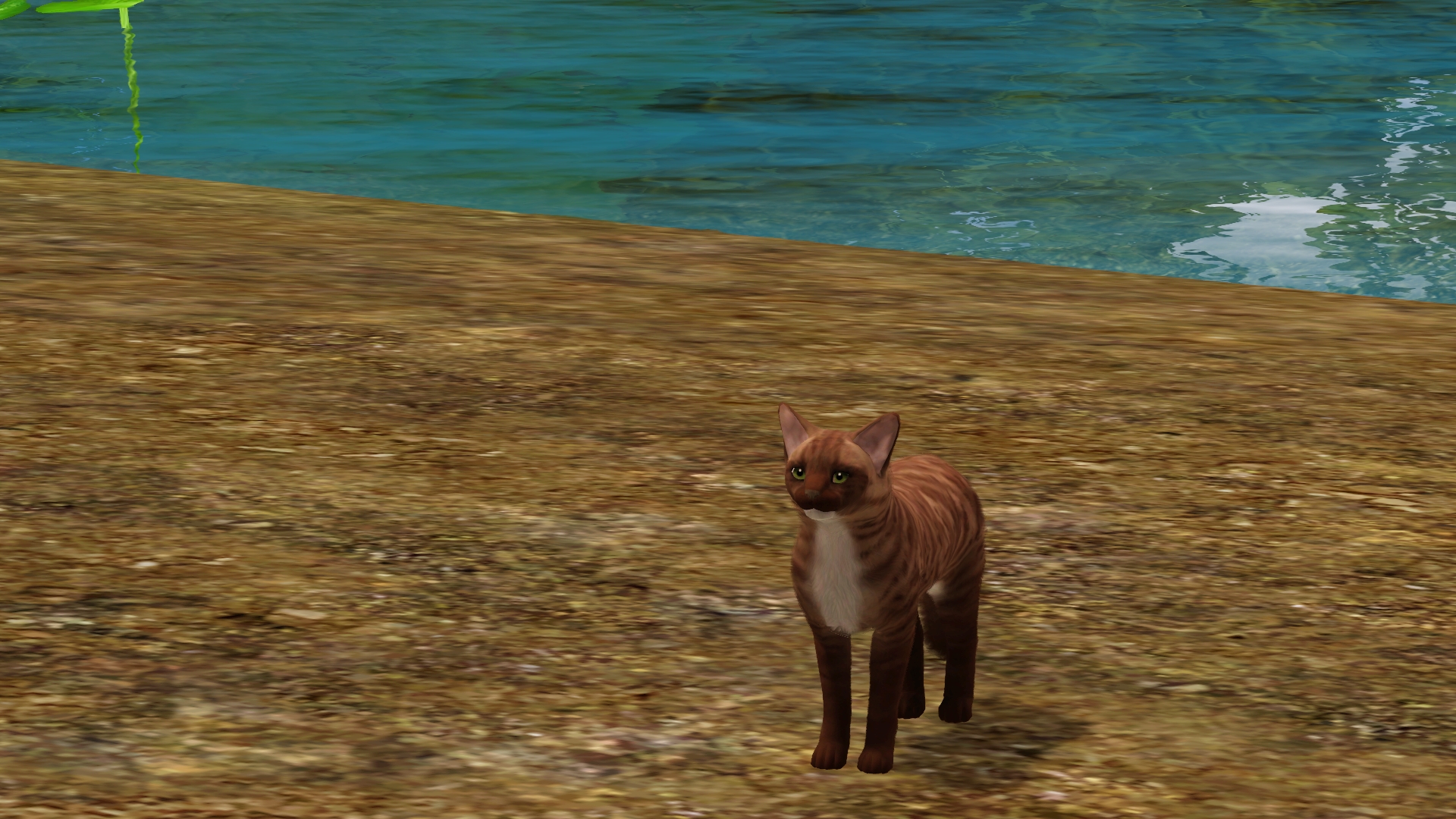 Having just gotten out of drowning, naturally Lotuspaw isn't too keen on touching the water. 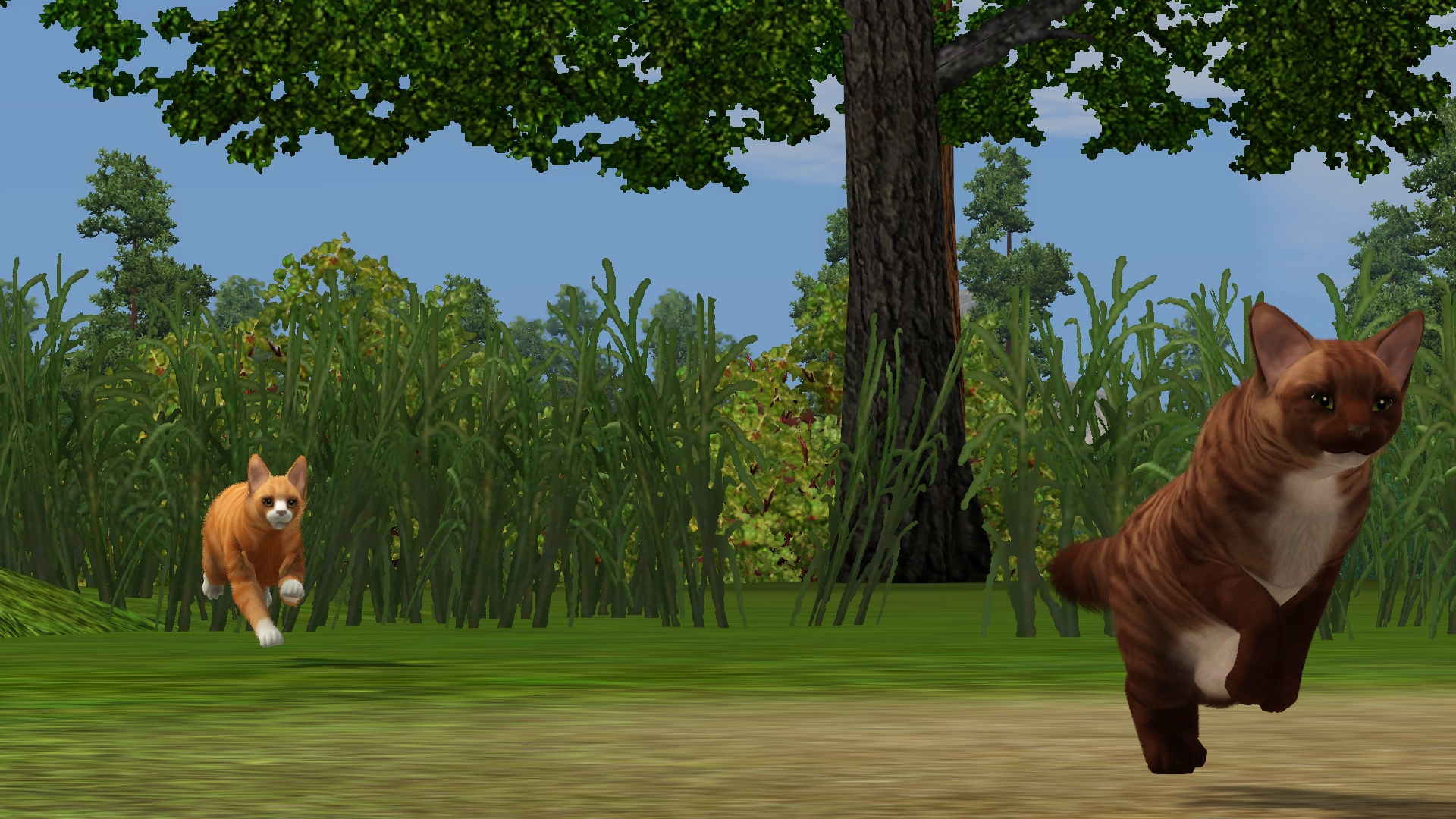 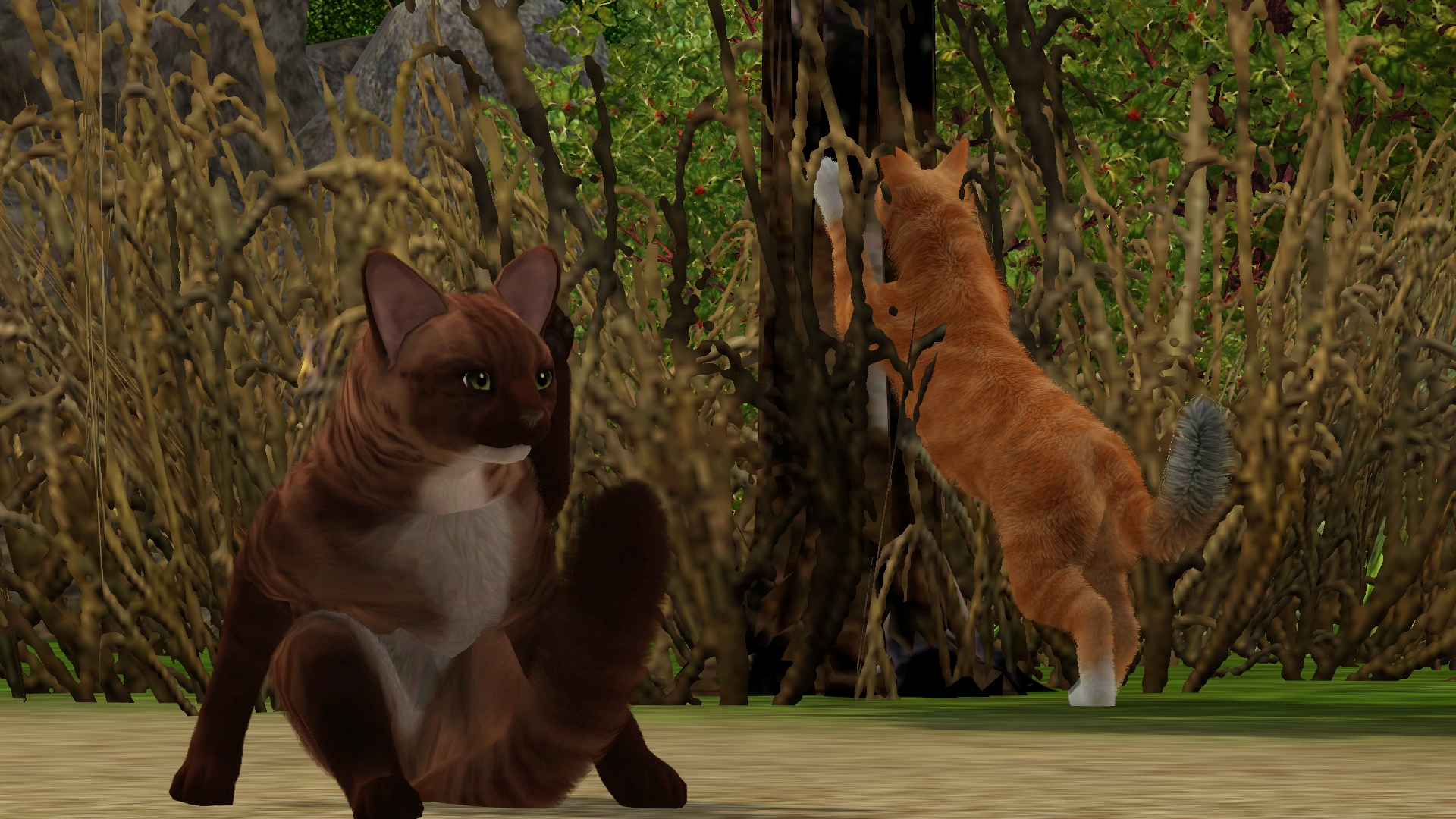 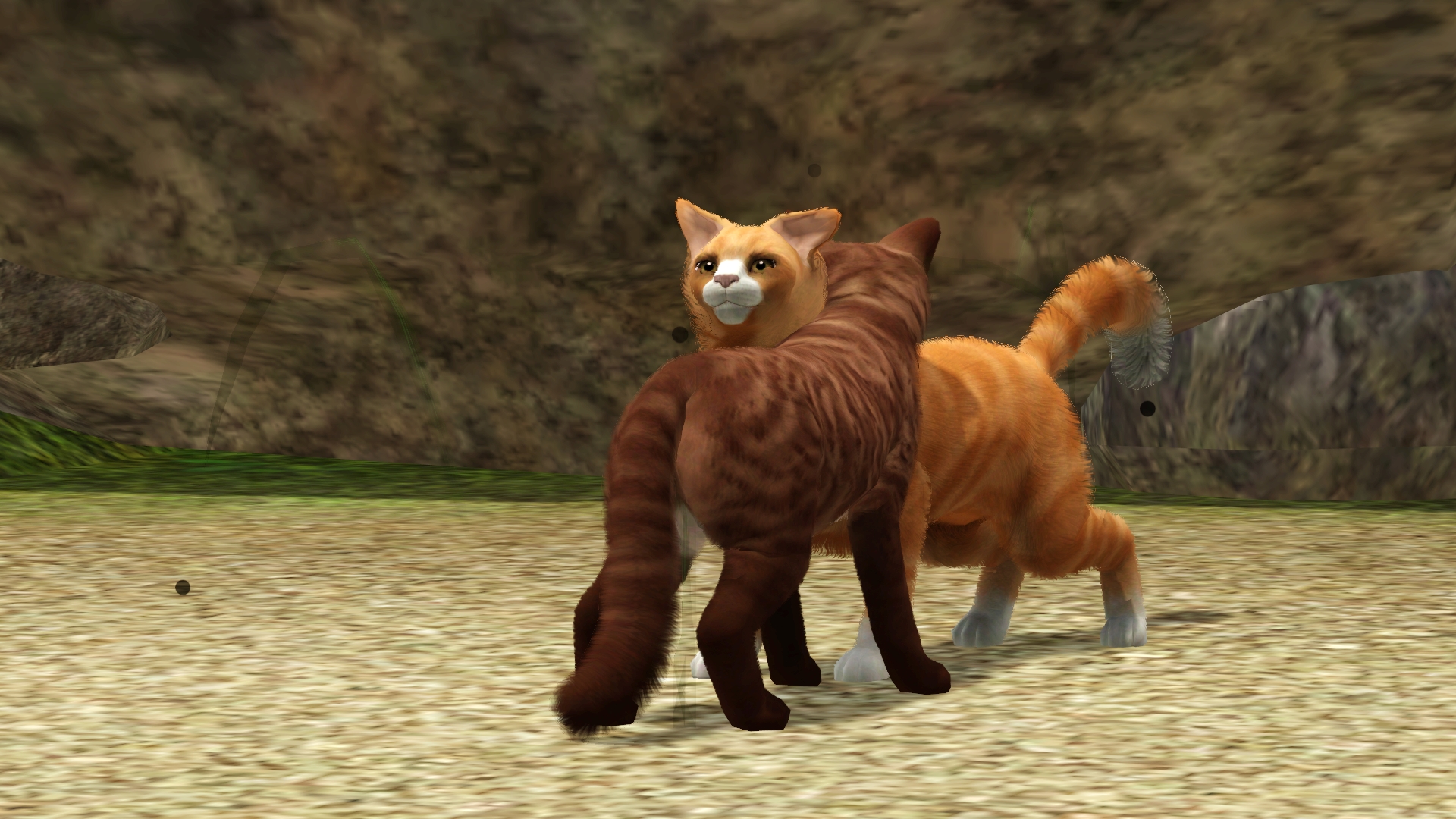 The two of them become very close very quick. Which, I guess, would probably happen considering they're the only two here at the moment.

No family tree this time, since no-one's related yet. Hope you guys enjoyed this update, and I'll hopefully see you in the next one!
Back to top