Hi there! You are currently browsing as a guest. Why not create an account? Then you get less ads, can thank creators, post feedback, keep a list of your favourites, and more!
Quick Reply Print version
Search this Thread
Replies: 11747 (Who?), Viewed: 498305 times.
Page 345 of 470
sushigal007

I thought it was common knowledge, tbh! I wonder if it's because the unspoken rule is that you're supposed to tell creators about GUID conflicts rather than fixing them yourself? So if people go poking around in SimPE to find the problems, they'll be more likely to try and do that. But I don't really think it matters unless you plan on sharing the fixed version online without mentioning that it's been edited, which could lead to multiple versions of the mesh floating around, some of which may have new conflicts with stuff in other peoples downloads that weren't in your own.
Or maybe because 50/50 is a method that works for pretty much all broken files, not just GUID conflicts, so if the OP isn't quite sure if that's the problem, 50/50 will likely catch it anyway.
Tumblr / Livejournal / Pillowfort
Advertisement
vegan_kaktus

Quote:
Yeah, that might be it! It's for sure very useful :-D
my tumblr / sims2packrat
didyouevenmakeasound

I keep forgetting that cache files sometimes stop the game from opening.

Like, obviously I’m glad that I got it to open, but come on, something as simple as cache files? I repaired the game and everything so I need to redownload certain things from the program files.
You can call me Diddy (or Eve, if you want to go by my real name) :)
My Simblr is simping-simmer. Come and join me there for a chat!
You can also find me on the MTS or PBK Discord servers under the name 'Evenfall'.
Want to know the latest news in Carregffynon? Click here!
gesine
Lab Assistant
#8604

I've been sick for a week and haven't had the energy to play my Sims... but never fear! My trusty brain has created a Sim version I can play in my sleep.The main object is to right click on a want to save it, and when I succeed at that (It's quite hard to right click in one's sleep. I often wake up with my finger going up and down on the blanket!), the game goes into fast forward for a while then the wish is fulfilled... Then I have to right click on another wish, all over again. It doesn't seem to matter that I don't know what these wants are or if I even want them fulfilled, I must click on. I've been playing this seemingly non stop in my sleep for a week... I call it Sim Hell! I don't think my brain quite understands what it is about the Sims that I enjoy...

Quote:
++++++
I often have trouble sleeping, and find myself tapping around to find the "go to sleep" button.
Stand up, speak out. Just not to me..
Natpop

I wish I could either
A) get a job as easily as sims are able to, or
B) get an office job where i am paid to sit at my own laptop and download and sort CC neatly and tidily into well organised folders and have a boss praise me for my good work, despite the fact that this is an utterly ridiculous scenario because it doesn't benefit an employer at all, only me
⟡ My simblr ⟡ Icon credit ⟡
didyouevenmakeasound

I mean, unless you're organizing your boss's CC.
You can call me Diddy (or Eve, if you want to go by my real name) :)
My Simblr is simping-simmer. Come and join me there for a chat!
You can also find me on the MTS or PBK Discord servers under the name 'Evenfall'.
Want to know the latest news in Carregffynon? Click here!
Justpetro

Or get a job where the boss is a simmer who will truly appreciate your skills.

Oh no! They're using a terrible default replacement!
I'm secretly a Bulbasaur. | Formerly known as ihatemandatoryregister

How about get a job that will pay for a butler with cash left over, with just a BA or no degree at all?
Pics from my game: Sunbee's Simblr Sunbee's Livejournal
"English is a marvelous edged weapon if you know how to wield it." C.J. Cherryh
didyouevenmakeasound

Do road defaults mess up in apartments when you move someone in, or is that just me?
You can call me Diddy (or Eve, if you want to go by my real name) :)
My Simblr is simping-simmer. Come and join me there for a chat!
You can also find me on the MTS or PBK Discord servers under the name 'Evenfall'.
Want to know the latest news in Carregffynon? Click here!
Bulbizarre

I've never tested, but I wouldn't be surprised if it's on account of the apartment sublots thing.
I'm secretly a Bulbasaur. | Formerly known as ihatemandatoryregister

I figured it was something like that - do you mean that each family in an apartment is counted as being on a different 'lot' despite living on the same one? Because that was my theory.
You can call me Diddy (or Eve, if you want to go by my real name) :)
My Simblr is simping-simmer. Come and join me there for a chat!
You can also find me on the MTS or PBK Discord servers under the name 'Evenfall'.
Want to know the latest news in Carregffynon? Click here!
HugeLunatic

Default terrains don't have an issue. The on lot object (rug) which is recolored to look like roads do get deleted when moving the lot or when a new resident rents an apartment. You just need to use the cheats on lot to edit the apartment and replace those objects.

I find it quite nice that we still seem to be getting waves of new players here...
I've got one or two things on MTS, but most of my stuff is on my main site here:
http://simcessories.blogspot.com/
(Now recruiting budding creators.)
AndrewGloria

I've just found the missing DVD drive and other bits for my computer that I need to play my Sims. They were in a box in my bedroom, and have been there since I moved in in June, but I'd put other junk on top of them. So I should be able to start playing again as soon as I get them all connected up.

I think my Sims 2 disc is inside the DVD drive.

[EDIT] My Sims 2 Double Deluxe disc is in the drive!!

With any luck I'll be playing before the weekend is out. Veronaville here I come!! :lovestruc
All Sims are beautiful -- even the ugly ones.
My Simblr ~~ My LJ
Sims' lives matter!
The Veronaville kids are alright.
Natpop

Side note: I had that random thought bc I was applying for jobs but losing hope...but then on Friday I got to have a phone/video interview with one place! Here's hoping they'll get back to me soon now that the weekend is almost over...otherwise I might go into aspiration failure; 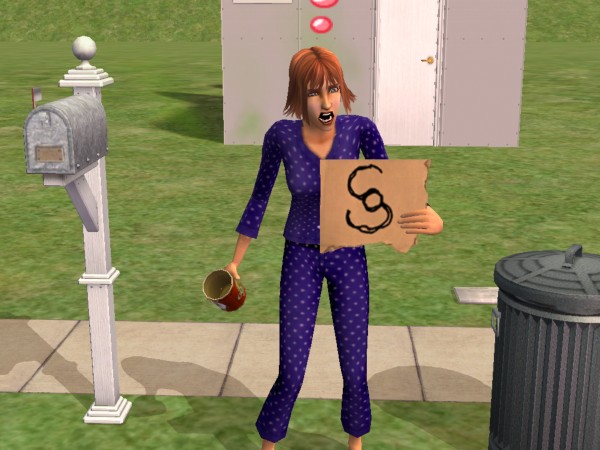 Good luck!!! I hope you get the job.
"Fear not little flock, for it hath pleased your Father to give you a kingdom". Luke 12:32 Chris Hatch's family friendly files archived on SFS: http://www.modthesims.info/showthread.php?t=603534 . Bulbizarre's website: https://archiveofourown.org/users/C...CoveredPortals/
Neverwinter_Knight77
Field Researcher
#8621

Do you need free will to see the desperation animations? All I get is the therapist.
Pideli

They don't do them when they go into full aspiration failure, they do it autonomously when their aspiration is very low but not totally bottom. Pretty sure you need free will yes, but I rarely play without it so I wouldn't know for sure.
Omnia - Fantasy / Mythological / Medieval Hood
Ephemera MoreColorful - SimpleSkin Recolors
AndrewGloria

I once turned free will off for a posed photo, but my Sims looked so wooden without it that I've never turned it off since. I mean I know I wouldn't like it if somebody turned my free will off. But I play my Sims so carefully that I hardly ever see the desperation animations. I've only ever had two Sims go into aspiration failure, and one of them was due to a known glitch: when I moved the Monty graves to the cemetery, Isabella reacted as if they'd just died.

I did succeed in getting my game running last weekend, and over the last week I've played Andrew and Gloria's lot for a day and a bit: from 8 o'clock on the Friday night to 6 o'clock on the Sunday morning. I'll report the latest news soon soon in the "What's happening in your game?" thread. But late last night Gloria finally maxed her Body skill, so I'm pretty sure she'll get her long overdue promotion on Sunday. (Don't tell me what it is; I want it to be a surprise.) She's been the All-Stars' MVP for a long time now. Physically she's now at her peak. Now professional sportspeople normally reach their physical peak in their mid to late twenties. After that they begin to slow down, though the skill they have acquired can keep them at the top of their game for a few years longer. So, if Gloria is at her physical peak, that would make her about 25-28. But she has a teenage son -- I reckon he must be at least 17 now. So the question is, "How old was Gloria when she had Andrew?" There are some questions that it's better not to ask in The Sims 2!!

One thing is certain: young though she must have been when she had him, she's an excellent mother -- just ask Andrew!

He adores his mum!!
All Sims are beautiful -- even the ugly ones.
My Simblr ~~ My LJ
Sims' lives matter!
The Veronaville kids are alright.
Justpetro

I haven't had much time to play the last few days, but it's been fun finally going through and organizing my photos from my uberhood. They were in one giant pile so I've been going through and organizing them by family. So much easier to find photos now and it was nostalgic to see some of the early photos I took of the sims.
aka fir3princ3ss
My Youtube Channel
Currently playing:
-Medieval Charter Challenge on The Sims 2
-Ye Olde Royal Kingdom Challenge on The Sims 3
Back to top