General - What are the strangest glitches you've ever seen?

Quote:
One of the things that you learn pretty quickly playing old games is, that newer isn't necessarily better for the purpose. It's not at all unusual for computers that can handle apparently more demanding programs to have problems with Sims2. One reason is that the game was designed to run with single-core processors; give it more than that and the machine and the program start confusing each other. There's ways to cope with that, but you have to choose to take them.
Ugly is in the heart of the beholder.
(My simblr isSim Media Res . Widespot,Widespot RFD: The Subhood, and Land Grant University are all available here. In case you care.)
Bulbizarre

Reference-posing (or t-posing, if you will) and flashing pink textures usually happens when the game runs out of video memory specifically. It starts dumping textures to make more room and it looks like it barfed. If it happens multiple times you can increase it in the graphic rules file. Running out of RAM usually just makes it crash.
I'm secretly a Bulbasaur. | Formerly known as ihatemandatoryregister

I actually found a screenshot of the event. 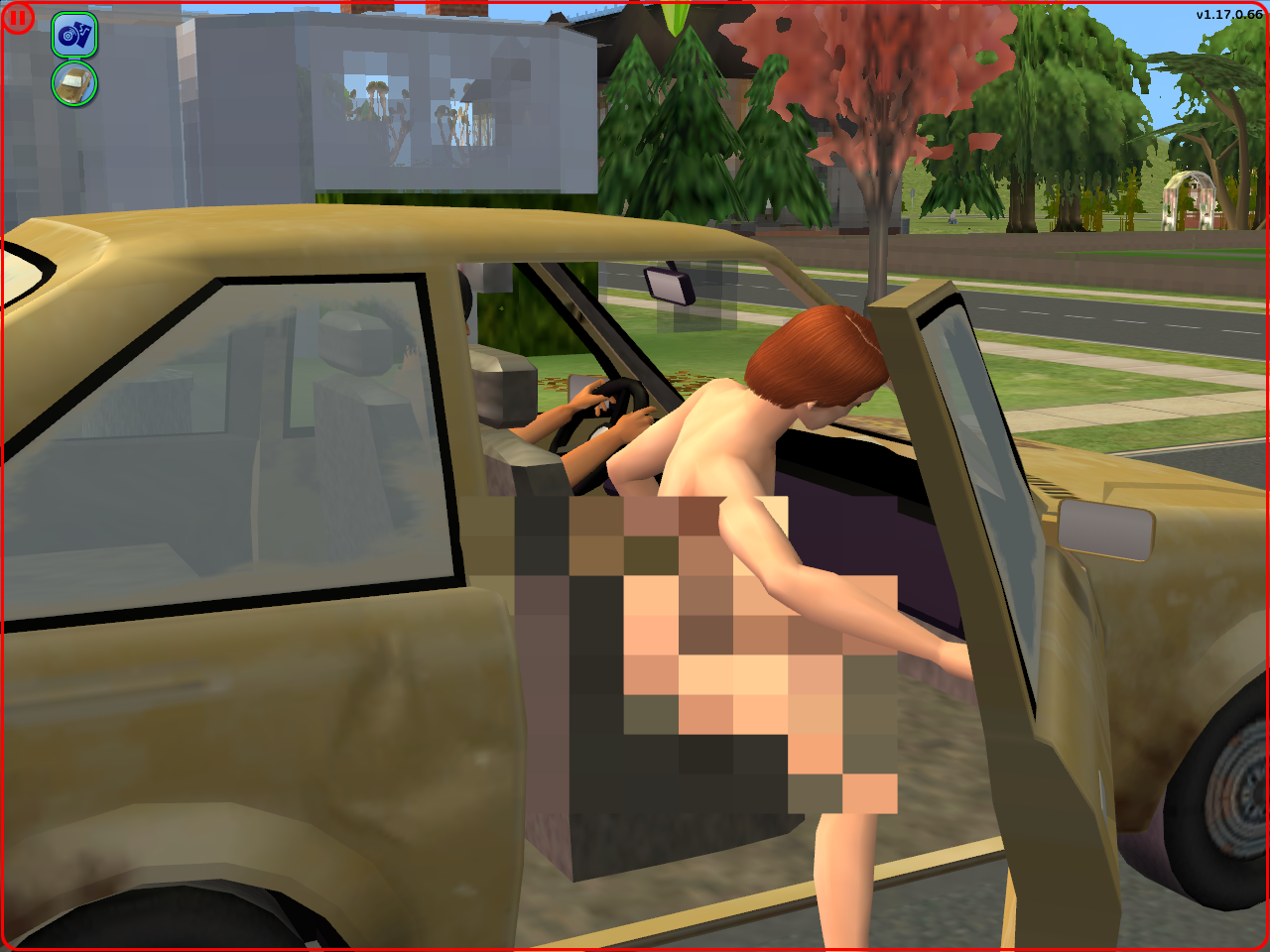 For some odd reason I found this pterodactyl underneath one of the dining chairs. I couldn't interact with it even though the cursor changes to the starburst, and I couldn't move or delete it without affecting the chair itself. The only guess I can hazard is when my Sim used the Fingerprint Scanner and revealed the pterodactyl.

Even when I placed that chair in the Sim's inventory before moving her and her fiance out of their apartment, the little beast was still underneath it. Yet, after moving them into their new home and placing the chairs in the dining room, it was gone.

The mystery of the missing pterodactyl. Beware, guys, that little guy is still at large. Don't let it gnaw at your ankles.
Check out my profile for homes and community lots ready for download: My Homes and Stuff
Bulbizarre

Maybe someone stuck it to the underside of chair with bubblegum. It fell off during the move.
I'm secretly a Bulbasaur. | Formerly known as ihatemandatoryregister

I have fish spawning at the edge of the lot instead of in the pond on a couple comm lots plus the Delarosa house.

Myalgic Encephalomyelitis is a severely disabling neurological, cardiac and metabolic disease.
The Hummingbirds' Foundation for M.E. is fighting for patients to be given recognition and appropriate medical care.
Please visit hfme.org for more information.
Emerald1234

your profile picture describes the scene perfectly
I May Be Life Dumb But I'm Sim Smart(mostly).
My Tumblr
Charity

Well that's no challenge at all to catch. XD
gdayars

invisible pond? there is one.
My stuff at Affinity
Sims Crafters Discord
My Wordpress
Peni Griffin

There is, but that's not how it works.
Ugly is in the heart of the beholder.
(My simblr isSim Media Res . Widespot,Widespot RFD: The Subhood, and Land Grant University are all available here. In case you care.)
kamoodle5

That reminds me of what I saw not too recently on the weather channel, about the fact that it can rain fish and frogs. Maybe a tornado or a whirlpool scooped up those fish from a body of water and tossed them right there.
Check out my profile for homes and community lots ready for download: My Homes and Stuff
rielynn71

Nope, no invisible pond or anything like that. I'm hoping it's just because that is my original Pleasantview hood and it's definitely corrupt. Fingers crossed it won't happen in other hoods.
Myalgic Encephalomyelitis is a severely disabling neurological, cardiac and metabolic disease.
The Hummingbirds' Foundation for M.E. is fighting for patients to be given recognition and appropriate medical care.
Please visit hfme.org for more information.
Bulbizarre

Do you happen to have any decorative fish? It's possible you may have misclicked and accidentally placed it there without remembering.
I'm secretly a Bulbasaur. | Formerly known as ihatemandatoryregister

Nope, not deco fish either. They spawn just as they would in a pond and the ponds on these lots have no fish. It's definitely the pond fish just spawning in the wrong place for some bizarre reason.
Myalgic Encephalomyelitis is a severely disabling neurological, cardiac and metabolic disease.
The Hummingbirds' Foundation for M.E. is fighting for patients to be given recognition and appropriate medical care.
Please visit hfme.org for more information.
Sunbee
Mad Poster
#90

Fish spawning in the wrong place happens now and then. Are they still there when you reload the lot? Did you try the batbox options on them?

It's been long enough I don't remember what I did, but it was just a glitch in the looks of things and not a neighborhood corruption issue. Probably the thing you click to fix animations on the batbox.
Pics from my game: Sunbee's Simblr Sunbee's Livejournal
"English is a marvelous edged weapon if you know how to wield it." C.J. Cherryh
Bulbizarre

Not so much a glitch, but a really odd thing that happened - I've told this story before, I think. It's about how a Deep Purple song incited violent tendencies in my Sims.

Back when I first got all the EPs and I created my Classic Rock station, one of the songs I added was Deep Purple's 'Hush.' For some reason, every time the song played on a stereo, two Sims somewhere on the lot, without fail, would end up getting into a fight. It was a bit amusing at first, but the tenth time it happened I was 'okay, this is weird."

I moved the song up so it was the second on the track listing. Sims kept getting into fights. So I set it to the very first song on the station and opened a household I'd never played before. I had one Sim turn on the stereo and change it to the classic rock station. Thirty seconds into the song, two of the Sims in that household began fighting.

The only thing I could figure out is that the song was a trigger for violent tendencies in my Sims. I replaced the song. My Sims got into a lot less fights after that.
I'm secretly a Bulbasaur. | Formerly known as ihatemandatoryregister

My sims dances hula to all kinds of music. Maybe it's a good thing...
rielynn71

Yes, they are still like that when the lot reloads. I didn't try the batbox because I had no idea it could fix things like that. I don't play that hood anymore but if it ever happens again I'll know what to do now, thanks!

Myalgic Encephalomyelitis is a severely disabling neurological, cardiac and metabolic disease.
The Hummingbirds' Foundation for M.E. is fighting for patients to be given recognition and appropriate medical care.
Please visit hfme.org for more information.
Bulbizarre

I found a picture of the Sim that turned invisible: 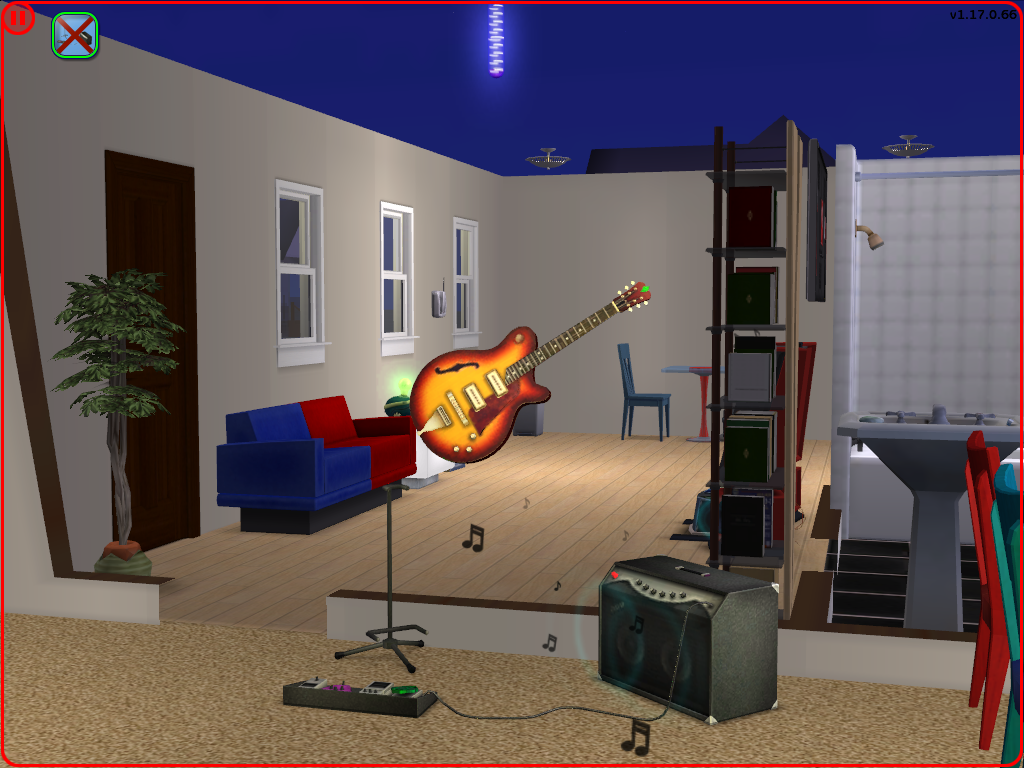 I just dropped my jaw at the sight of a headless Sim just now.

As if it isn't bad enough poor William gets a hideous face during one of the facial lifts or when the skin tone on his head is different than the rest of him. Poor man!

I left his apartment without saving and returned to find him back to normal. Still, that was awkward. o.o
Check out my profile for homes and community lots ready for download: My Homes and Stuff
legacyoffailures

I haven't had those glitches that have been posted on here. Are they caused by mods or Maxis' faults?
The glitches I have seen most in my own game so far are that when two sims go up or go down on stairs, the Sim behind may complaint like the route is blocked. It's kinda odd. And I built a library and had a room with two secret bookshelf doors and my Sim kept coming in and out of the room until he decided to walk through the bookshelf.
Bulbizarre 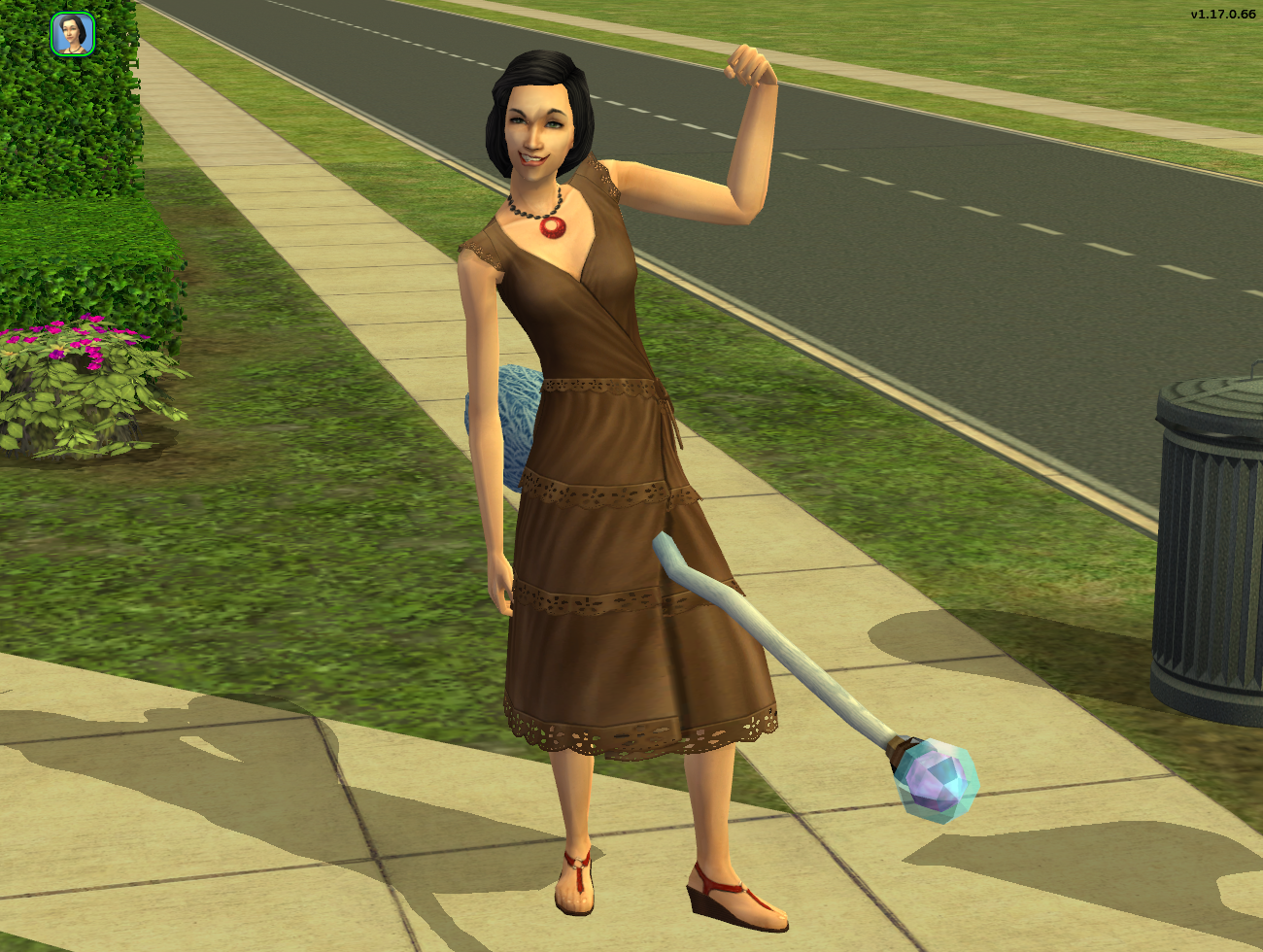 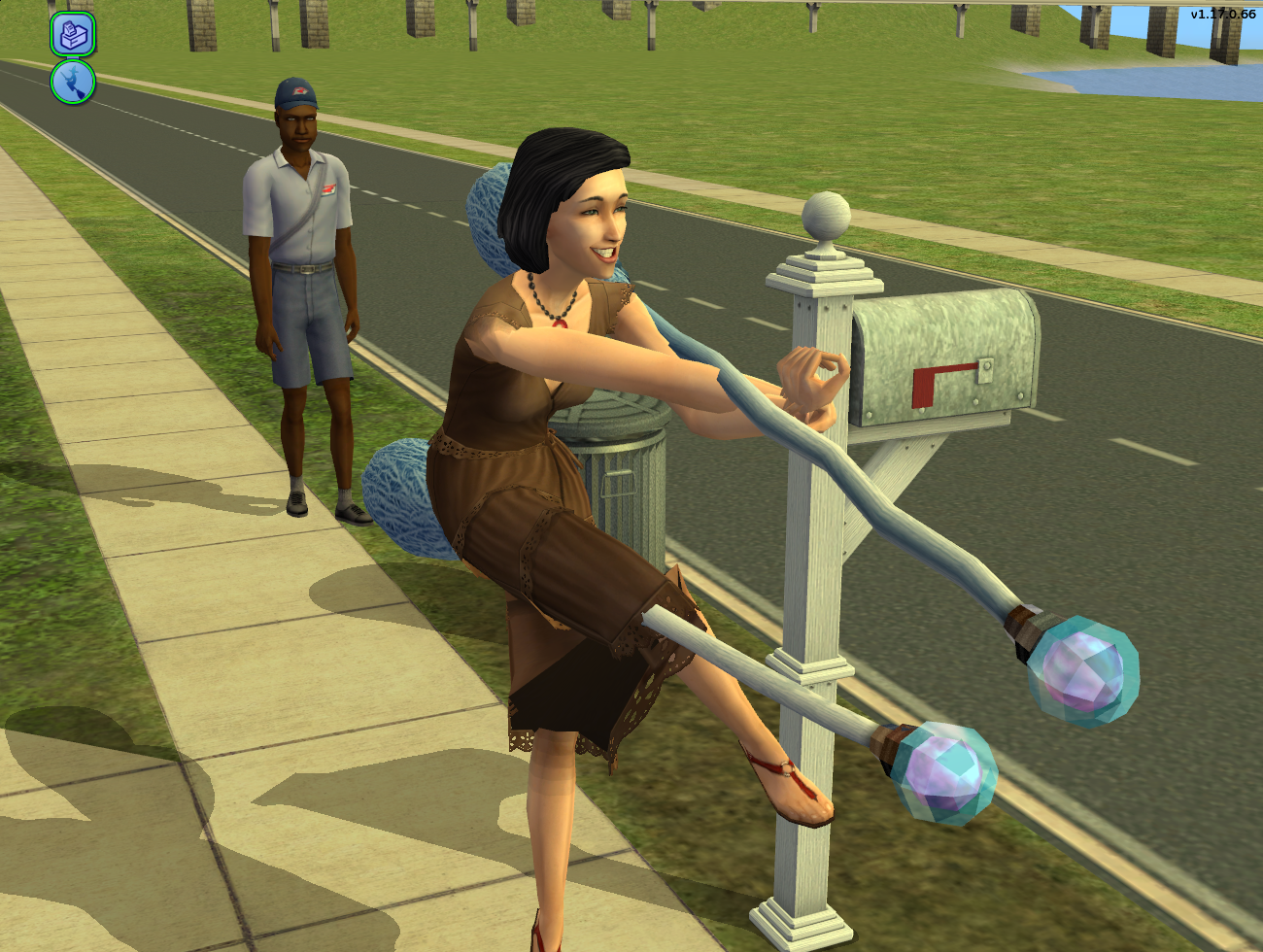 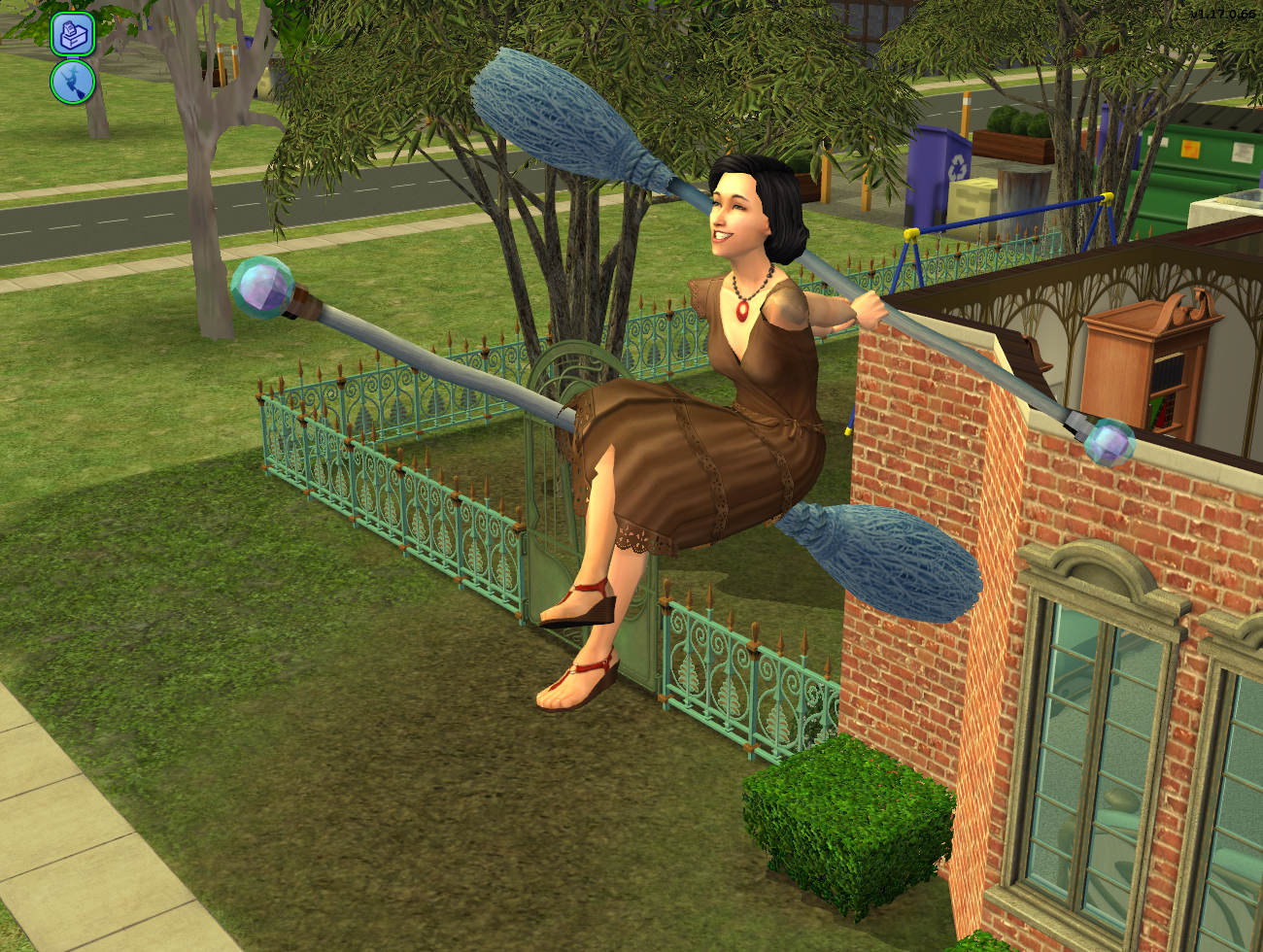 Ouch. I would imagine that Samantha's (?) look is more of pain from where the broom is stuck? I take it that is a mod? I remember wanting to give that houshold brooms instead of cars but not being able to find workable brooms.
Bulbizarre

For witches, you get "fly to lot" instead of "walk to lot" (which is honestly a little silly when the lot is literally next door or across the street or some short distance).
I'm secretly a Bulbasaur. | Formerly known as ihatemandatoryregister

She has two brooms, she must be the supremely highest rank of witch.
Back to top