For the lots, have you tried the Lot Adjuster?

And regarding apartments, I think I have found a tutorial somewhere on how to make the beach ones playable. I think the error lies in the fact that the lot elevation gets reset when the game creates a new instance of the base lot (called the apartment sub lot), and since the beach lots are anything but flat, the issue is much more apparent. I'll see if I can find the tutorial again.

Basically, if you have UC (or patched AL, or M&G), just pick up the lot and place it down again. If you don't, follow Mootilda's tutorial found on the link. Again, this what I'm talking about is for building apartments on uneven terrain (including beaches) - to have the portals regenerate, try using Lot Adjuster.
DJ. who?
Essential mods, cheats, tips & tricks for The Sims: Castaway Stories || Felicity Island for TS2
idemo autom!
simsfreq
Mad Poster

That isn't quite what I meant, I was meaning that if they were lots that were already present in the neighbourhood it might be bad to move them, whereas if they were empty beach lots placed from the catalogue they may be more able to be moved. But now I think about it, none of the Maxis hoods except probably the vacation hoods have any beach lots in because there is no normal hood for BV

Possibly beach lots placed from the catalogue do something weird once they are placed down and then can't be moved after that. I know they change the terrain to make it fit the ocean template etc.

I've had dorms on a beach lot before, I've never had apartments on one but I'd like to try it

TIL - Sims can take the virus crafted at the Biotech station career reward. Their moods needs to be far south, but... whoa. That exists.
DJ. who?
Essential mods, cheats, tips & tricks for The Sims: Castaway Stories || Felicity Island for TS2
idemo autom!
sugoisama

So was anyone gonna tell me that the "pastel pink/blue/purple/yellow with butterflies" wallpaper that I use for children's and babies' rooms actually came with Teen Style Stuff, or did I really have to find that out on my own from a lilsimsie video
Charmful

A new glitch I have not seen in all my years nor heard of. I took a red-headed bachelor off to Twikkii on vacation and I wasn't paying attention on how or why but after getting out of the ocean from swimming he had like mini fight dust rumbles or smoke under his feet and every time he stopped walking he zooped about 10 feet above everyone. I call this affliction 'rocket ship feet'. I took him to a community lot and it stopped but when he returned he had rocket ship feet again. I had him choose a different lodging and it stopped for the rest of the time. He also developed 'plate hand' but nothing a reset didn't fix. reset via testing cheats did not fix rocket ship feet.

It was so very odd because I have had sims stay at the first place and swim in the ocean before with no rocket ship feet issues. Here attached was a pic of him 'watching the ocean' from a really great height with his rocket ship feet.
Uh oh! My social bar is low - that's why I posted today.
My SIMBLER | SIM WHIM | SIM VIDS | SIMS 2 STORIES | SIM PICTURE-TAKING TIPS | MY HOOD | SIMSTAGRAM | TWITTER | TWITCH
Sunbee
Mad Poster
#9206

The Criminal Career Reward can break!

Dang, Junior Mann.
Pics from my game: Sunbee's Simblr Sunbee's Livejournal
"English is a marvelous edged weapon if you know how to wield it." C.J. Cherryh
Sims2Christain

one restaurant, one staffer! I didn't know this was possible!
topp

@Sims2Christain is this an owned community lot that you visited? Because the last time I tried making an understaffed restaurant, everyone kept just not working. Reassigning someone to be the host would ignore customers that came in between them not being the host and being reassigned, and waiters didn't clean up plates nor took anyone's orders who had already been sitting down. I was playing that owned business though, so it might be different if visiting the lot as a customer...
DJ. who?
Essential mods, cheats, tips & tricks for The Sims: Castaway Stories || Felicity Island for TS2
idemo autom!
Sims2Christain

unowned from what I can recall. will have to double check.
SneakyWingPhoenix

Appearantly, the base game has no rugs.
P.S. Sorry for my bad english.
Sims2Christain

I found out that you can delete foundation fencing with the pool creation tool! hidden away in a document by crocobaura when replicating his plane interior level.
FranH

I finally discovered (after throwing out 2 neighborhoods I'd started to play due to the problem) the reason my pixels were not getting pregnant-there was, of course, a major mod conflict, which did not show up in the HCDU reports-Midgethetree's romantic interactions improved mod-it clashes badly with ACR (I think) and all the pregnancy tokens contained in-game.
I'd gotten rid of a few other hacks I'd believed were interfering, but nothing worked until I removed that one.
I should have known better. One never puts in two different mods doing the same thing,

So now I can put back in the Old Town neighborhood (from scratch) and start it all over again and Hermione Snyder of TT is now pregnant and not stuck waving her arms around fruitlessly.


My pixels can have babies! Let the fertility begin!

Receptacle Refugee & Resident Polar Bear
"Get out of my way, young'un, I'm a ninja!"
My downloads of various stuff: https://www.mediafire.com/#myfiles (including funerals!)
ieta_cassiopeia
Scholar
#9213

Perhaps the developers were concerned that they would be mistaken for plates and those Sims less gifted in the pathfinding department would consider them a movement restriction?
Pideli

That this shelf seems to be infinitely stackable. 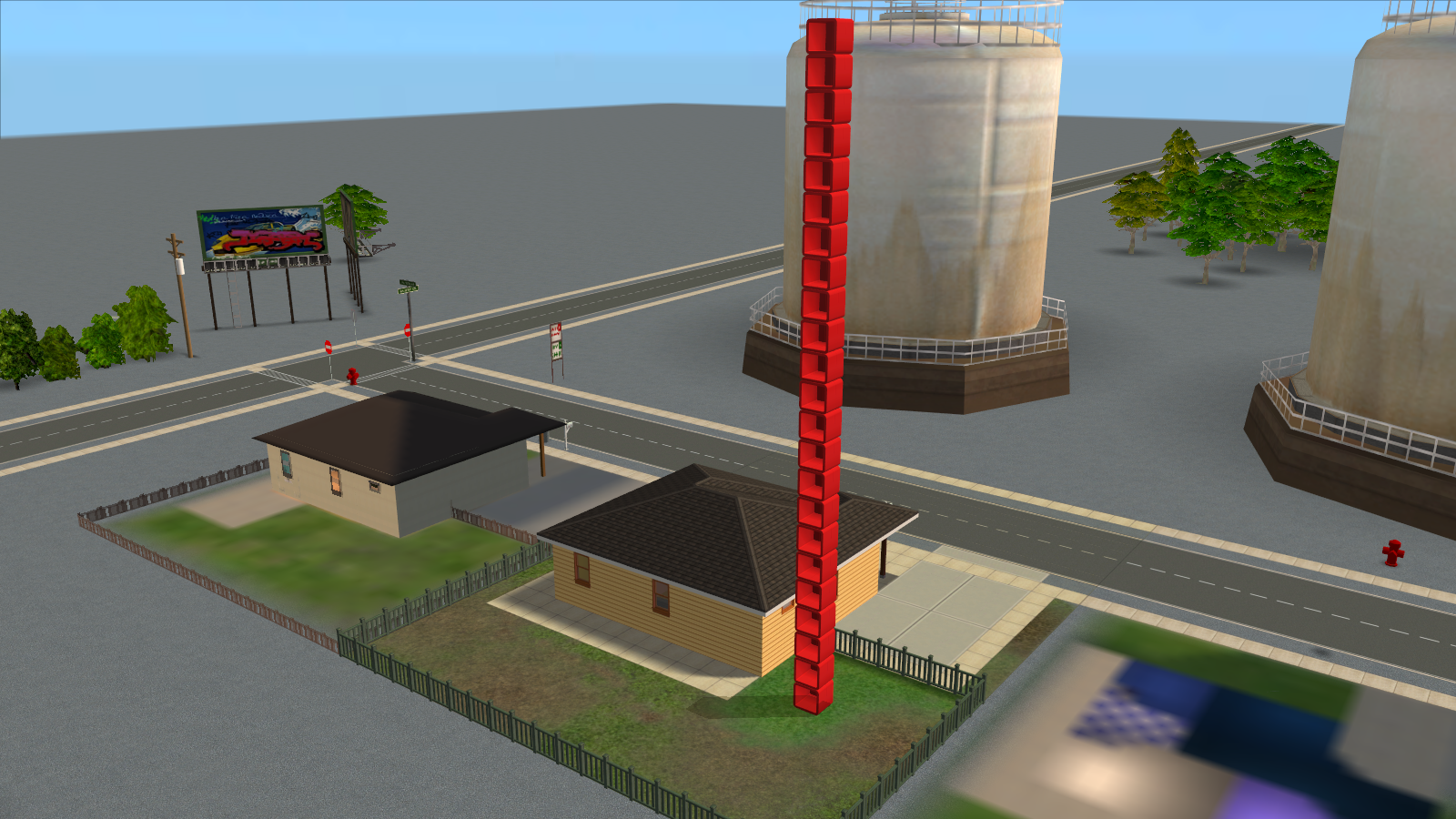 I discovered that sometimes when you call in sick, you get a vacation day deducted. However, in my particular case my sim didn't actually have any vacation days, and so apparently the game didn't remove any.
FranH

But you'd better be careful about taking vacation days-the boss is gonna get suspicious after a while and you'll get a warning about not showing up..(I vaguely remember)...
Receptacle Refugee & Resident Polar Bear
"Get out of my way, young'un, I'm a ninja!"
My downloads of various stuff: https://www.mediafire.com/#myfiles (including funerals!)
kestrellyn
Theorist

I only do it when sims are actually sick, or when they need to teach toddler skills and there's not enough time otherwise.
topp

Quote:
If they made sims being able to pass through walls and objects a flag - meaning sometimes yes, sometimes no, depending on the context - they sure could have created objects that are passable through! They probably didn't think of it for the base game, or wanted players to use carpets instead. :shrug:
DJ. who?
Essential mods, cheats, tips & tricks for The Sims: Castaway Stories || Felicity Island for TS2
idemo autom!
BlueAlien
Scholar
#9219

I stopped having Sims call in when I realized it was just deducted from their paid vacation anyway, and only have them call if they don't have any vacation. If the boss believes them (which should happen any time they're genuinely sick, and sometimes when they aren't), they'll get the day off with impunity. I'm not sure, but I think how full their work performance bar is determines the likelihood of them getting away with it when they're not actually sick.
simsample

When elder Sims visit their adult children and are waiting for them to come greet them, they start flapping their arms like get over here and give me a hug. It is so cute.
omglo
Alchemist

Quote:
I was taking some preview pics for an upload (get it Tuesday) last night,and noticed a "rug" made out of tiles. It reminded me of the floor tile blanket and refrigerator lockers from the neighborhood pictures.
Tumblr

Toddlers can play in leaves using the same animation as splashing in puddles.
Ugly is in the heart of the beholder.
(My simblr isSim Media Res . Widespot,Widespot RFD: The Subhood, and Land Grant University are all available here. In case you care.)
BlueAlien
Scholar
#9225

InTeen allows independent teens to have adult jobs, but doesn't include uniforms - so young Douglas Elliott, who is a Senior Officer in the military, goes to work in a t-shirt and shorts.
Back to top