Whatdayamean, there are no dragons in Sims 2?
There most certainly be dragons:

Not in my game, there be'nt. But there SHOULD be. Is any certain expansion or such required for those?
I am Error.
FranH

I have no idea-although it would probably help if you have at least NL, if not higher. I'm not sure, because it's not mentioned. The dragons aren't NPC's, and so they won't be populating the neighborhood. Rather they're semi-static objects.
Receptacle Refugee & Resident Polar Bear
"Get out of my way, young'un, I'm a ninja!"
My downloads of various stuff: https://www.mediafire.com/#myfiles (including funerals, here: https://www.mediafire.com/file/e6tj...albits.zip/file)
Kligma

Hopefully, then. Yeah, I thought it was odd it didn't mention it at all. Guess there's only one way to find out.

I'm making all the relationships for my new neighborhood and it couldn't be more tedious, I'm still shaking when I have to add memories ... buhh. At least I already have the photos taken. I realized that some sims would look better with more tanned skin, but I already have the photos taken, so I'll have to think about it when I start my next neighborhood

Quote:
I relate to this so much! I've been creating a custom hood and because it'd bother me for sims not to have pre-established pasts and relationships, I've been doing that in SimPE. It's less nerve racking than long and tedious, though. It's why I take long breaks when developing that one

So, I began making another hood that has a half dedicated to supernatural sims and another half dedicated to human sims. The point of that hood was to make families and play. Of course, me being me, had to give those sims preset ages, memories and relationships, too...It's just satisfying to see it all slowly come together

When a game is predictable, it's boring.
That goes for any medium that isn't life.
That's why The Sims 2 is my favourite sims game.
It has elements of unpredictability and everything feels more involved.
The Sims 4 is another story altogether...
Sokisims

I do the relationships part with simblender and insimenator, maybe with SimPE would take less time, but I'm lazy to learn it.

I recently downloaded a mod to avoid relationship decay and get a bit of that preset effect.

Some of the neatest little things are hidden away under decorative or miscellaneous. Not really hidden, but sometimes I don't think to look at decorations. Nice little details that make the house look more "lived in". I like to put the computer clutter on the computer desk, because it reflects me in real life. Never know when you might need another cable, hard drive, etc.
AndrewGloria

Nine years ago today, on 30th November 2012 Gloria Jones and her teenage son Andrew moved into the little house at 19 Chorus Court in Veronaville, with me as a very rookie new player trying to look after them. I don't know how we survived those first few days, but somehow we muddled through, and we're all still here, safe and well. Veronaville today is a bigger, better and brighter place than it was back then. Brighter, because all the lived-in houses there now have electric lighting throughout.

(A surprising number of them back then had either no electric lighting, or just one light bulb for the whole house. For instance there's only one electric light fitting in the big house currently being prepared for the arrival of the Romanov family.)

Anyway the good folks of Veronaville feel they've plenty to celebrate. Andrew will be roasting the turkey for another big Thanksgiving meal. Probably not at Chorus Court but at a friend's house. Quite a crowd is expected there, but of course Andrew, Julian, Gloria and Garry will be high on the guest list.

Long live Veronaville!
All Sims are beautiful -- even the ugly ones.
My Simblr ~~ My LJ
Sims' lives matter!
The Veronaville kids are alright.
simsample

I just saw on tumblr that Leefish died.
Death sucks. :P
I hope they got hula zombies and a nice tropical drink.
Ugly is in the heart of the beholder.
(My simblr isSim Media Res . Widespot,Widespot RFD: The Subhood, and Land Grant University are all available here. In case you care.)
Freefalldreams
Scholar
#11112

I'm starting to feel like Ron Weasley in OOTP... "Anyone else we know...?" and then abject horror when someone more privy to news says "Yes." Probably because I saw the lit-wands-tribute gif when I went to Tumblr to look, but...yikes, this is getting close again. (And just to head off anyone who thinks this is a fine time to pitch a fit over an HP reference, I can offer up an unshared Tonks/Lupin lemon to bite into if you prefer.) Leefish made the first fridge-stockable deco food, which set the stage for owned grocery stores becoming interesting! Aside from her own creations, the site offered a platform for creators to showcase similarly innovative work -- I think we all have a favourite or plenty from there, or from derivative mods thereof.
Please support the Sim National Labs [email protected] team!
Stuff I've made!
simsample

She was a supermod on here for a long time.
I will choose a path that's clear- I will choose free will
-RUSH- -RADIO- -RADIO- -ARCHIVES-
Simpeople and Me Archive- -11Dots Archive- My Sims World Archive
Sokisims

I wish I could click the sadness button like on Facebook, because I really feel sorry for Leefish, I have read his posts and downloaded his mods countless times.
Charmful

How many years of my life have I waited for sims 2 to load?
Uh oh! My social bar is low - that's why I posted today.
My SIMBLER | SIM WHIM | SIM VIDS | SIMS 2 STORIES | SIM PICTURE-TAKING TIPS | MY HOOD | SIMSTAGRAM | TWITTER | TWITCH
FranH

I wish I had a 'seasons' button on the real life weather right now. It's snowing and I don't want it to do that. I'd much prefer that it was summer and hot.
Receptacle Refugee & Resident Polar Bear
"Get out of my way, young'un, I'm a ninja!"
My downloads of various stuff: https://www.mediafire.com/#myfiles (including funerals, here: https://www.mediafire.com/file/e6tj...albits.zip/file)
Pideli

Quote:
And I'd use a weather vase to get a little more snow! I need it for a music video! I've waited a year to be able to film it

Got the first snow today but it's not going to stay

"I dream of a better tomorrow, where chickens can cross the road and not be questioned about their motives." - Unknown
~Call me Jo~
Careers and businesses for sims
What I Love About Toddlers
Charity

I didn't know that.

I wish I had a weather controller like the sims do IRL. I'd make it snow in July

I keep thinking about that incident that happened a few evenings ago when Julian caressed Jack Gill and they fell in love with each other. (I posted about it in the "Things I've Said while playing" thread.)

Andrew and Julian (both Knowledge teens) have been in a committed relationship for almost nine real years now, and I would have thought that Pescado's Romance mod would have kept them faithful to each other. Reading the RTFM for the Romance Mod, it seems that, if Jack had tried to flirt with Julian, Julian would likely have rejected it, but it was Julian who autonomously initiated the interaction, and Jack, a very promiscuous Romance Sim, will never reject such approach from a close friend. I dealt with the matter by using the Sim Manipulator to remove the Crush and Love flags and the memories relating to the event, but I'm not entirely happy with that -- it feels a bit too cheaty for me. I sort of accept that such things might happen when they eventually get to university, and then I'd be ready to help them work through it, but I really wasn't ready for it happening while they're still teens. And I certainly didn't expect Julian, whom I've always regarded as the steadier and gentler of the pair, to initiate things.

When I speak to him, Julian is quite defiant about the matter. He says, "I don't know why you are making such a big deal of this. All I did was stroke his cheek. It's not as if we were smooching or making out. I just wanted a little bit of intimacy, and Andrew wasn't there, so I couldn't do it with him. And Jack is very attractive -- even Andrew thinks so.

"Seriously, I don't want to hurt Andrew, but I can't see how what we did can hurt him."

Andrew has had wants to flirt with Jack, but it was a very long time ago. But only a couple of weeks ago he wanted to flirt with Jihoon LeTourneau. Andrew calls these "temptations", and he's never acted on them.

I'm beginning to wonder if the way I play my Sims subjects them to a bit too much temptation. I encourage my Sims to make close, albeit platonic, friendships with other Sims. That includes encouraging Sims in committed relationships like Andrew and Julian, to make friends with other Sims who, like Jack, are both attractive and promiscuous. This was the scene in Gill's mother's bedroom a few hours after the "cheek stroking" incident: 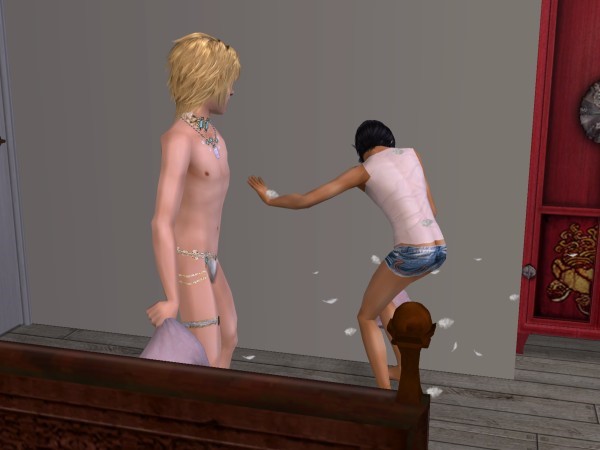 Maybe I shouldn't be surprised if, when Sims are doing things like this, with my encouragement, they occasionally go a bit further, and start to flirt and kiss.
All Sims are beautiful -- even the ugly ones.
My Simblr ~~ My LJ
Sims' lives matter!
The Veronaville kids are alright.
UnfocusedBunny
Test Subject
#11124

@AndrewGloria
Isn't it so that we tend to have a firm idea of the way "ideal" relationships should be, whether for our Sims or ourselves, when in fact complete absence of affection towards anyone besides the chosen partner is not only unrealistic but perhaps even unhealthy! If Julian had rolled wants to break up with Andrew after the incident, I would certainly consider it a signal of Julian falling out of love with Andrew which would have been very sad indeed. But if he didn't, I would agree with what he says. Maybe you (or Julian) could talk to Andrew and see how he feels about this. I think it is also important that Julian reassures Andrew that getting those crush and love flags for Jack, changes nothing about how he feels about Andrew. After all, many of us in long-term relationships are surely familiar with something similar happening. If Julian and Andrew really want to be together, something like this will only deepen their trust and strengthen their relationship.
pianogrinder
Instructor
#11125

I started A.I. painting my sims 2 townscapes on Wombo Dream. This got me inspired after one of the uploaders called Deastrumquodvicis did sim town paintings with the app and framed them as wall pictures for sims 2.
Back to top