is it normal when you save lot to a lot file that it also includes every recolor of a CC file? I am preparing to package my church and I use to recolrs of a CC window and one of a CC stars but when I check it with Clean Installer ever recolor of the window and stairs are in there is that normal? edit checked again did same thing with the CC piano
topp

I think the point of CI is to be able to deselect stuff you don't want packaged alongside your lots/sims, so you should be able to remove those from the package.
DJ. who?
Essential mods, cheats, tips & tricks for The Sims: Castaway Stories || Felicity Island for TS2
idemo autom!
CatherineTCJD

Quote:
Yes - that is normal. Just untick ALL the boxes of stuff you didn't use. And "save as" a different named file.
Please ~ support my TS2 habit! Shop at my Etsy shops:

ok, what happens when I don't know what color is what (terrible at color/color blind) and there is no image just a name
Mischief Managed

Quote:
for the windows it's one of the frames but don't know which one the windows/ recolor are Moon_Ez Out Of The Dark Ages - 2 Storie Church Style by michelle
CatherineTCJD

If you turn on the debug cheat - then when you hover over the recolor in the catalog, it sometimes tells you the name. 'Course sometimes you just get a long-nondiscriptive string of numbers (that you can scan for and find in SimPE.)
Or - take all the recolors out of your game, put back in the one you think you used, and check in game...
Or - make do with using just the mesh and not a recolor?
There really isn't an easy way to sort it out, I'm sorry to say *sigh* ~ and Good Luck!!!

Good news I found michelle included a color chart in the original download so I've narrowed it to four, so I'll just use option 1 or 2 but what is the debug cheat?
TheDraizeTrain

Anyone know the order of the graves at the House of Fallen Trees? Like from left to right, who's grave was who's (Fricorith, Gvaudoin, Rainelle)? I stupidly forgot to note this down. I know the grave spots taken are the first top two and the third bottom (hope that makes sense lol)
Simblr
Pideli

Quote:
What a coincidence! I just started playing that lot not that long ago. And I still have the graves there but they're in Swedish so I don't know how much that'd help you. :P
Omnia - Fantasy / Mythological / Medieval Hood
Ephemera MoreColorful - SimpleSkin Recolors
AndrewGloria 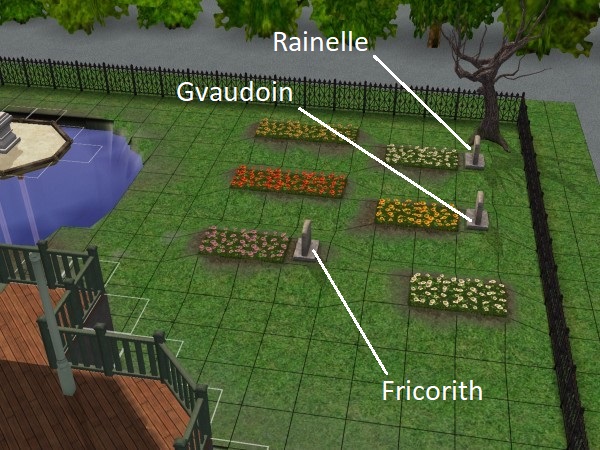 I've never played the House of Fallen Trees, so it's just as the good Maxis made it. None of my Sims will spend even a night there. Ravi Bertino (Illegitimate son of the late Jon Smith Tricou) says, "There be ghaisties there!" Even though I have Squinge's No More Hauntings hack!
All Sims are beautiful -- even the ugly ones.
My Simblr ~~ My LJ
Sims' lives matter!
The Veronaville kids are alright.
CatherineTCJD

Quote:
Thank you, Andrew - you beat me to it

.
Please ~ support my TS2 habit! Shop at my Etsy shops:

I thoroughly enjoyed that "just as the good Maxis made it"

How bad is it if you don't have townies in your hood? I like to make all of mine playable so that they gain memories (work, marriage, demotions/promotions etc), progress in life with children etc instead of being stuck in time (I am aware of story progression but not a fan of the time sync thing). The only townies I leave alone are the grand vampires, lol (I know they are an NPC). I know that you can't adopt babies/toddlers if you don't have townies, but that's okay since I have the same-sex pregnancy mod. Are there any other drawbacks of no townies? I've heard that if you send your Sim hiking, they have a chance of meeting an unsafe NPC.. Is there any more I should be aware of?
kestrellyn
Theorist

You can adopt toddlers without townies, just babies are the problem. I've made a couple mods now that use the same code from the baby-adoption stuff that causes errors without townies, possibly there are other mods that do so as well. Other than that, I don't think there's a problem. If you don't have any YA townies, you will have empty dorms, I guess, and probably also empty neighboring apartments if no adults or elders (but I gather some people prefer them that way, anyway).
Fyren5

Oh dear, I didn't think about mods using the same code from the baby-adoption stuff.

Not entirely sure what to do about the dormies situation, the only option I can think of is to let them spawn or just have empty dorms (which sounds boring to be honest). I don't mind empty apartments, I usually fill them with playables anyway. The townies I make playable typically end up in them. It kinda sounds like the game is more "functional" with townies running riot..

Thank you for letting me know!

Quote:
Would it work (for the purpose of baby adoption) if you only left one townie? That way Fyren5 could make all the townies but one playable, and leave that one as a tramp / person "of no fixed abode",
All Sims are beautiful -- even the ugly ones.
My Simblr ~~ My LJ
Sims' lives matter!
The Veronaville kids are alright.
joandsarah77

You need two townies as the parents to create an adoption baby. I don't know if they have to be male and female or not.

And of course, if you only had two townies and adopted a few babies then genetically all of those children are siblings...
"I dream of a better tomorrow, where chickens can cross the road and not be questioned about their motives." - Unknown
~Call me Jo~
Careers and businesses for sims
What I Love About Toddlers
AndrewGloria

Ah! So when the game creates a new baby for adoption, it makes it from the genetics of two (pseudo-) randomly selected townies? Whereas, for toddlers and older, it creates a (pseudo-) random Sim in much the same way as if the Sim was generated in CAS?

May I ask a little question of my own. As most of you probably know, Garry Mackay married Gloria Jones in November, and moved into her house at 19 Chorus Court. A few weeks before the marriage, Garry invited fellow politician, Senator Kerie Hanby, a Downtownie, to move into the spare room of his Ranch Retreat house in the Via Venezia. There was no romantic attachment between Garry and Kerie, it was simply a means to transfer the house that he no longer needed to a friend and colleague. Becoming playable should enable Kerie to gain the additional skills she needs to become Mayor. (The post of Mayor of Veronaville has been vacant since I started to play. When I checked the levels of all the townies in the Politics career, Senator Hanby was the senior one.)

Well, when Garry moved out on getting married, the family was still called the Mackay family, although Senator Kerie Hanby was now the only family member. So in SimPE, I have now changed the family name from "Mackay" to "Hanby". I backed up the 'hood before making this change, and I have changed a family name before, but, because we TS2 players tend to get a bit paranoid about corruption, I thought I'd better ask here if anyone thinks it might be unsafe. I know the game uses the ID number to uniquely identify a family, so I think (hope?) that changing the family surname should be completely harmless.

Looking at it another way, does anyone think that a politician transferring ownership of a house to another politician in this arguably somewhat irregular way might constitute political corruption?
All Sims are beautiful -- even the ugly ones.
My Simblr ~~ My LJ
Sims' lives matter!
The Veronaville kids are alright.
Mischief Managed

Quote:
Personally I prefer 1, but I'm not quite sure why. Possibly just gut feeling. 2 looks more like the local stone, out of which I presume the walls are built. 1 is something special -- marble maybe -- that has been brought in.
All Sims are beautiful -- even the ugly ones.
My Simblr ~~ My LJ
Sims' lives matter!
The Veronaville kids are alright.
wickedjr89

I prefer 1 as well. Not sure why, I just like it better personally.
My Simblr
They/He
Phantomknight

I was going to say 3 or 2...
"May the sunlight find you, thy days be long, thy winters kind, thy roots be strong." -Grand Oak Tree, DAO

Can anyone enlighten me on how to search for things on Tumblr? Feels like no matter how broad a search term I use not much comes up, yet I know tonnes of people upload there?
"It is easier to fool people than to convince them they have been fooled." - Mark Twain
Truth will not fear scrutiny.

Quote:
#2 matches the stonework of the walls best; but I like the contrast of #1 better for the build overall