Hi there! You are currently browsing as a guest. Why not create an account? Then you get less ads, can thank creators, post feedback, keep a list of your favourites, and more!
Quick Reply Print version
Search this Thread
Replies: 161 (Who?), Viewed: 36099 times.
Page 7 of 7
gojira86
Test Subject
#151

I prefer playing Sims 3. I never had Sims 2 so I have no personal experience of Mrs. Crumplebottom, and the only downloadable sim of her on this site is for Sims 4. Does anyone have recommendations for what traits and life time wishes would be good for making her in Sims 3 CAS? I could add the finished sim to be available for download.
Advertisement
Liz

@gojira86 I don't remember enough about my brief excursion into TS3 to know what info you need, but here are a few details... I would give her a very low nice score (she physically assaults people on a routine basis). You could give her a decent playful score for her poker proclivity, but I think she should be super low there too, given her total intolerance of shenanigans. For a LTW I'd make her a frustrated Family sim. In various game iterations she's either a widow or a spinster, so it's like her romance rage is a jealousy thing. She's outgoing enough to walk up and clobber complete strangers, but she's not even a little bit interested in making friends. A cat should give her all the Social she could ever want. She's a fit woman, able to climb up out of wishing wells and make with the impromptu beatings, and she can and does charge energetically across those community lots dispensing Handbag Justice, so I'd make her active (and if TS3 lets you, skinny from the get-go).

I can see her as a teacher (she wouldn't necessarily enjoy the kids, but she'd be super into telling them how to behave). Others enjoy the thought of her as a military woman. Given her penchant for modesty I don't picture her in any job or career that involves any shaking and/or revealing of it. She might be a homebody who sends her cat(s) out to earn her/their keep. Really, there's a range to play with here, given what we know of her. You could keep her super traditional or go full hermit, heavy on the eccentricity.

Crumpton Lodge
Double-posting FOR SCIENCE! And to show a house...

There have been so many amazing builds for this, and I'm sincerely grateful for the challenge, @Hellfrozeover , as I've really learned from the process and the results. I kept trying to steer toward lace and potpourri, but then I would veer back into my own lane, where I'm more aesthetcally comfortable. As a result I may have built another home that, instead of being the love letter to Crumplebottom I'd intended, looks more like the set of a sit-com where, because wacky odd-couple hijinks, Crump and I have to somehow live together without an excessive amount of murder. So, that's something I'm going to need to work on as a builder (sticking to the theme, I mean. I hardly ever murder people anymore). Also I said "another home" because I made a first effort here that completely failed even to pretend to respect the budgetary requirements, so it didn't make the thread. This is my actual entry, Crumpton Lodge. It's on a 3x3 lot in TS2, and the budget this time? Nailed it. Â§50,000 exactly. (*high-fives @Zarathustra and @Karen Lorraine) 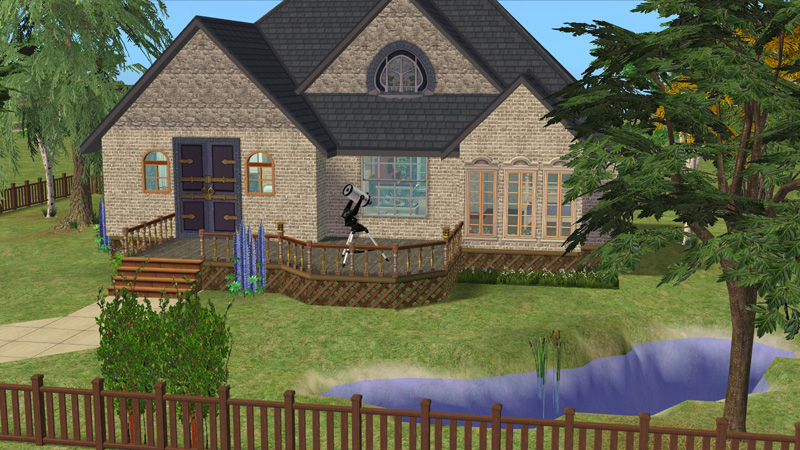 If there was one thing I wanted more money for, it was landscaping. Going for "back among the trees" here without buying a lot of actual trees. Also liked the idea of the front door looking a little barred against the welcome wagon. Of course I spared no expense in providing her with the finest in it's-not-electrical telescope technology in order to monitor the neighbours. You know she's gonna be a one-woman Neighbourhood Watch. 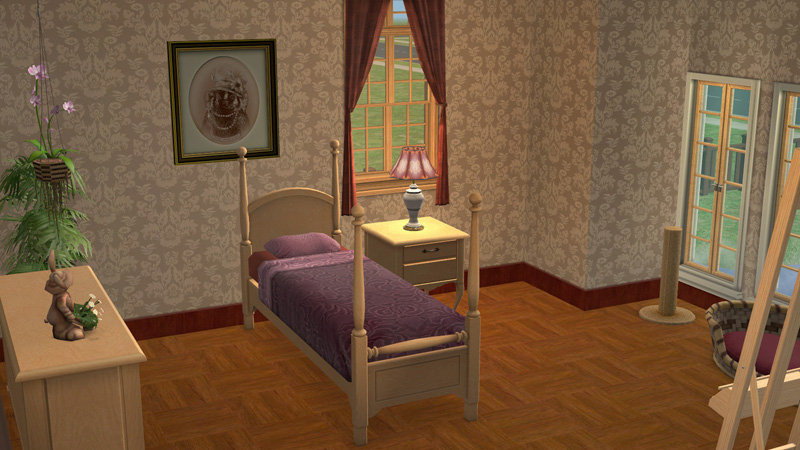 The bedroom is decorated in "old-fashioned romance" but with zero hint of hanky-panky. The room is big enough for a double bed, but why? Nobody's allowed in here but the cat. 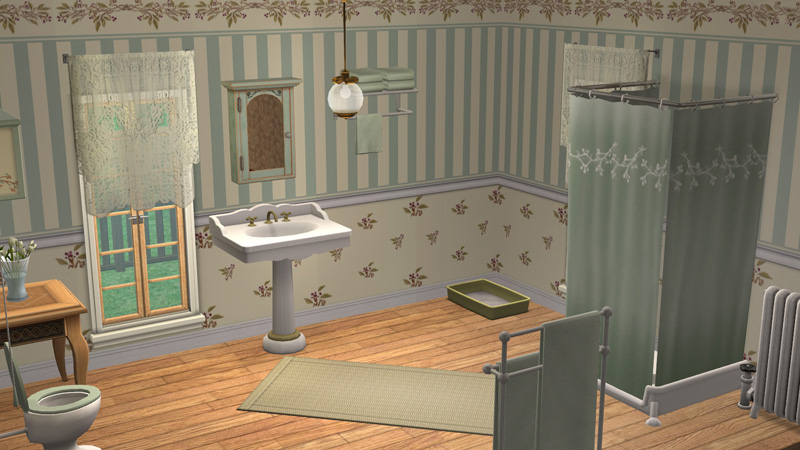 The bathroom is minty and old-fashioned and has lace and flowers and even more flowers and a raised tank with a chain to pull, and nothing ever happens in this room. 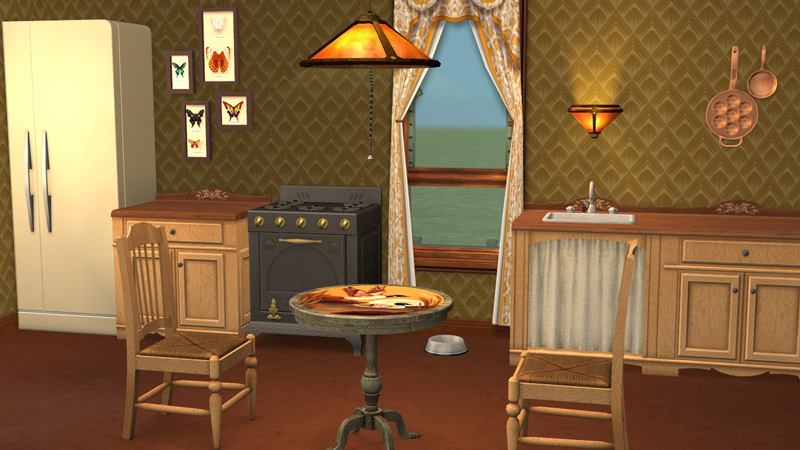 The old-fashioned continues in the kitchen area, and I think "old-fashioned" became my refuge from the fussy doilies I kept meaning to include. The curtains are way too fancy for a kitchen this small, though, and that's on purpose. Since this hideaway is meant to be a literal retreat from the world, I had the idea that some of the furnishings should be remnants from a much more opulent mansion where she used to live. 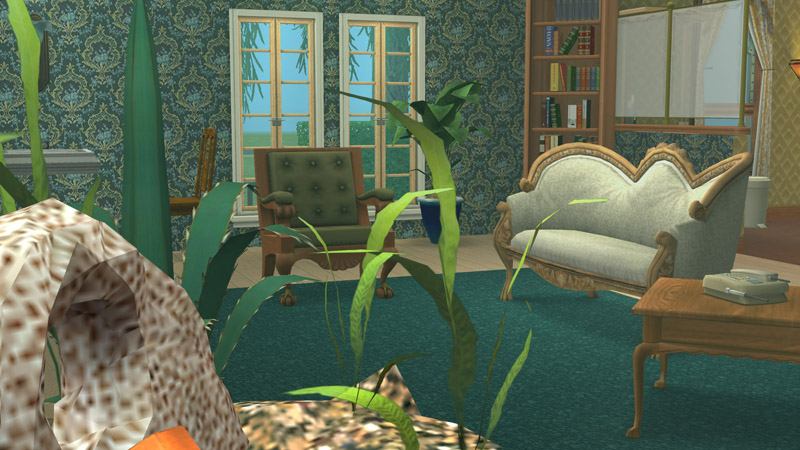 This includes the lavish loveseat, stately armchair, and other living room furnishings that are just a little bit grander than a home this size really needs, as seen from the inside of the fish tank our fastidious resident doesn't really care for but maintains for the entertainment of her feline companion. 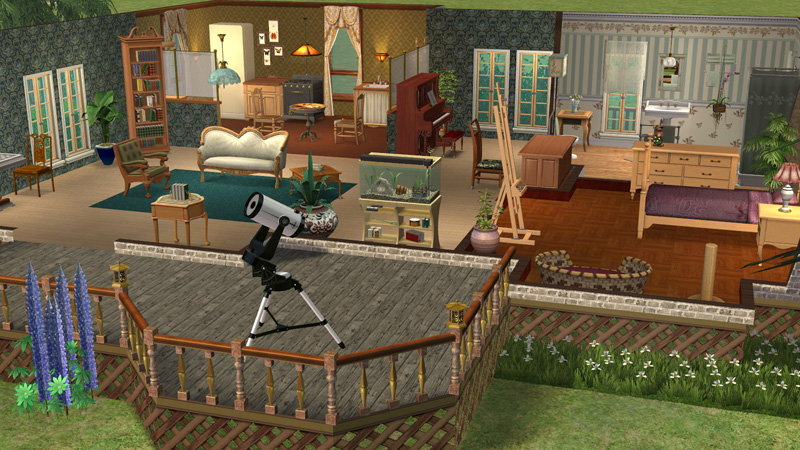 This little living room now holds the loveseat and armchair from an old parlour, as well as the desk and a bookcase from the library. Two chairs from the antique, imported dining room set are now used for playing chess, and the piano has moved from conservatory to the hallway space available. It all seems to suggest something of a decline in one's circumstances, but far from being some tragic loss, that's exactly how this lady likes it. No great, empty mansion to maintain, no more servants to supervise constantly, lest they start fornicating while stealing from her. Just a proud, independent, uptight, kinda violent woman and her precious cat.

Please swing by here for more/larger pictures or to download Crumpton Lodge, and many thanks again, Hellfrozeover, for such a rewarding challenge theme!
Hellfrozeover

Today is the last submission day that you'll get a participation sticker for! I'll do a final mop up and get the remainder of the stickers given out tomorrow :D

Please remember though, that even although the event may be closed in that sense, you are still welcome to build a Crumplebottom hideaway even after the event date, it just won't be awarded, so keep them coming

Joe-
I just finished scouting out the house that old lady Crumplebottom left to the Animal Society in her will. It is something. First all I could see was trees, is there even a house in there? I find the mailbox, so yeah, it's the right one. And the weird thing is, it is surrounded by a high fence, and no gate. I walked the whole property line and no gate, none, nada, niente. How did that frail old lady get over the fence?

Sending you the pictures of the front. Notice anything?- no windows. The entire house has only 5 windows, and none of them face the front.

Inside is kinda cozy, but decorated from last century. She put this floral wallpaper over the paneling in the main room- that's gonna be a pain to scrape off. The fireplace works. The kitchen might be a lost cause- I think that stove is original to when they invented stoves.

There is an alcove off the main room, with storage for all these bottles of wine, but no bottles are in there. There are wine glasses on every table and counter, even next to the tub. I don't wanna start a rumor about a drinking problem, but sheesh. Also, there are handbags everywhere, hardly any clothes but a boatload of handbags.

The main bedroom is okay, but seems smaller because of the loud wallpaper. There is cat hair on everything! And when you pull down the shades, the windows blend into the walls- it's like there are no windows in the room- creepy!

The second bedroom must be seen to be believed. It was for her cat, I guess, because it is filled with cat stuff, toys and beds and a litterbox that has seen better days, and better cleanliness. Then, if you look at the picture of the Eiffel Tower, it is covering the final window. It folds down and there is a telescope set up (for peeping?). Crumplebottom was a strange bird.

Thanks Joe, for the opportunity to list the house, but my advice is, tear it down and start over. 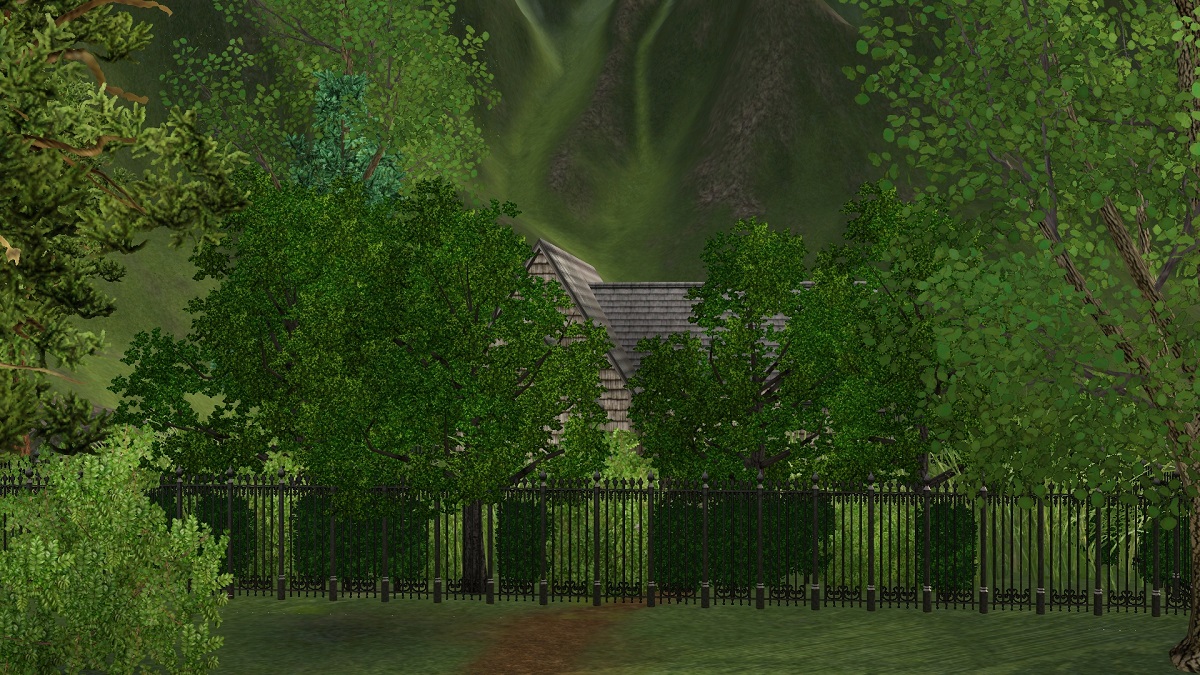 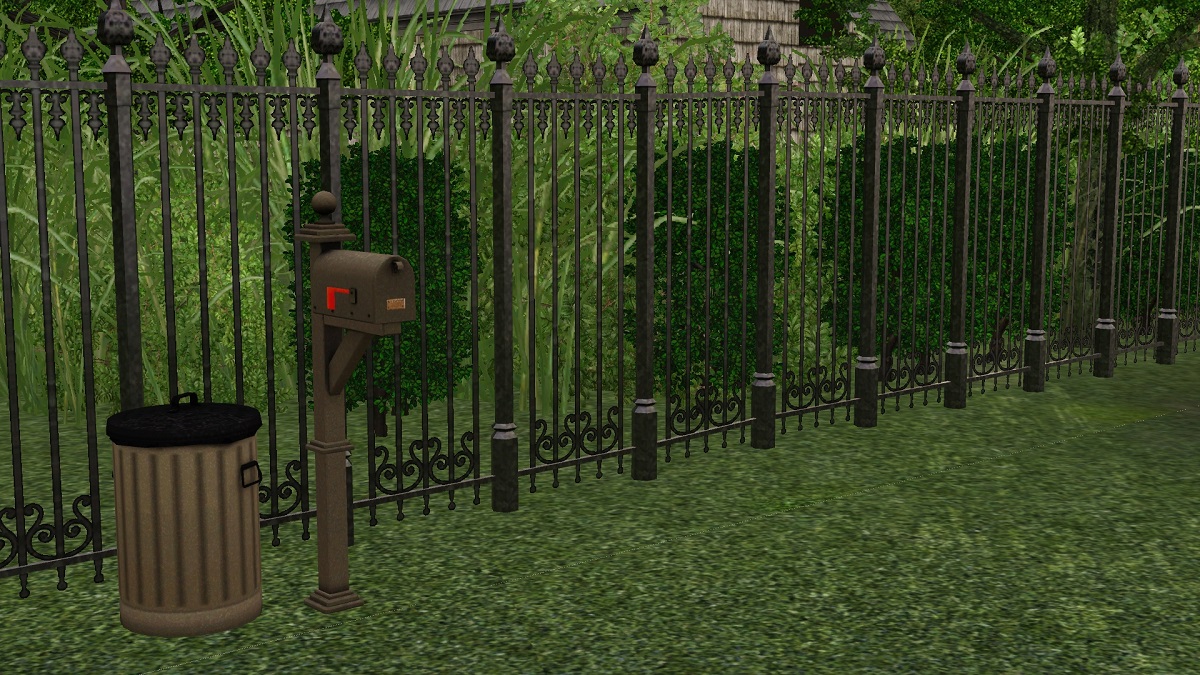 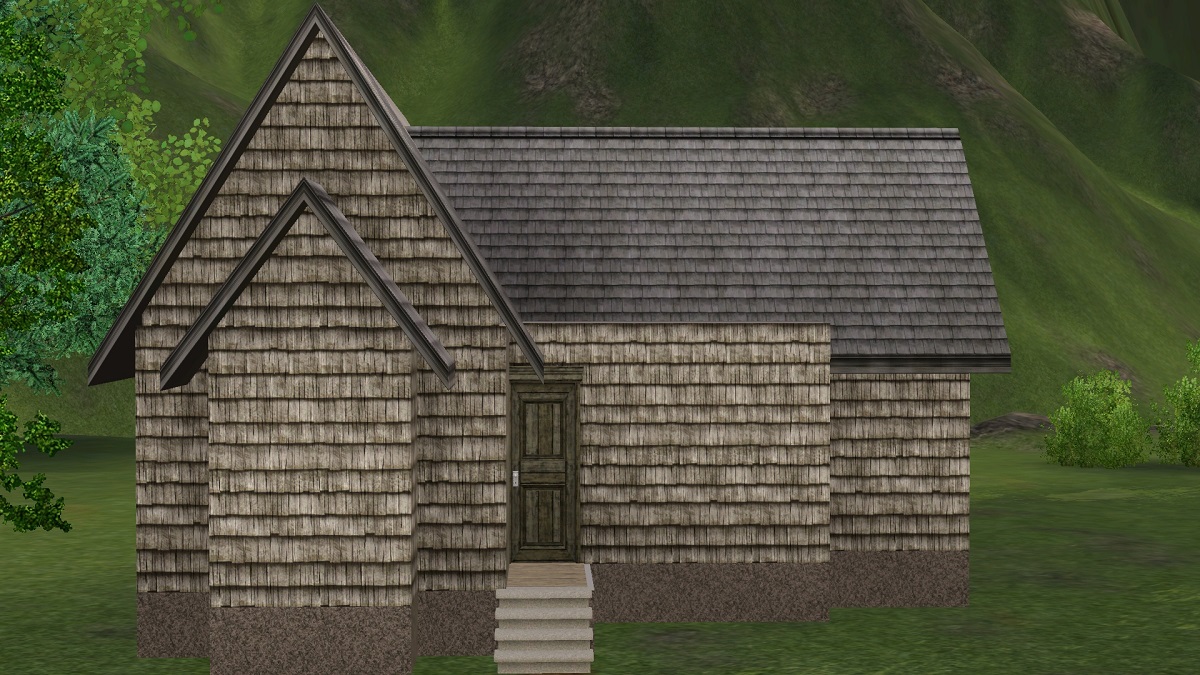 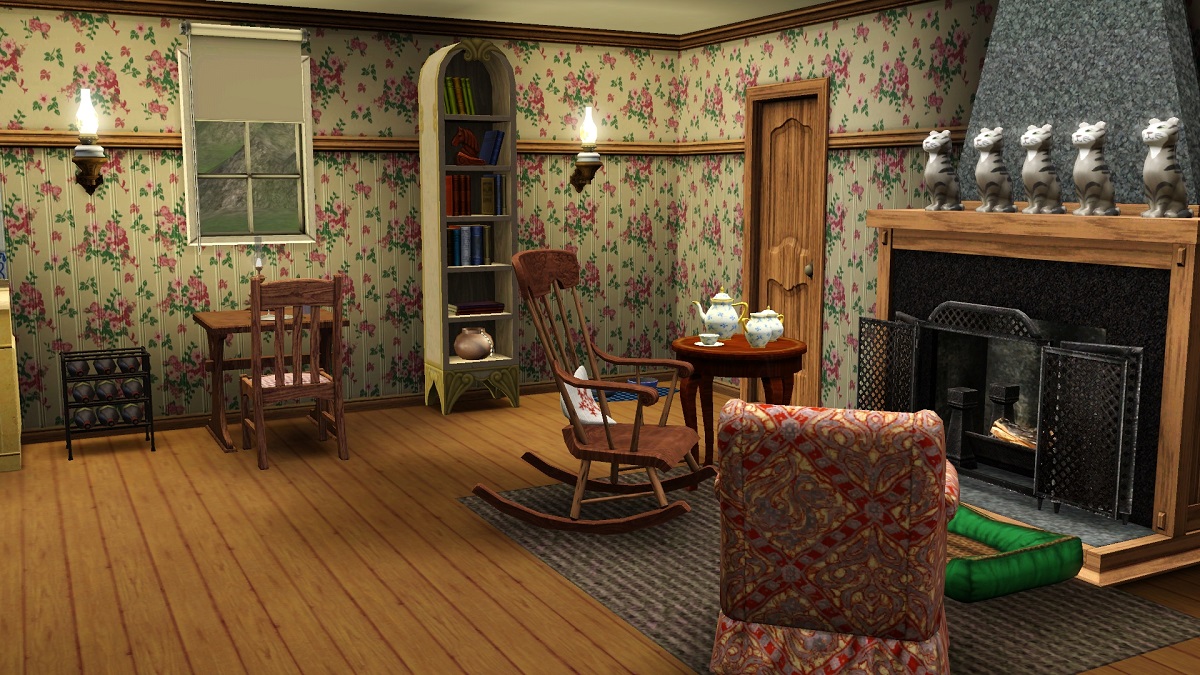 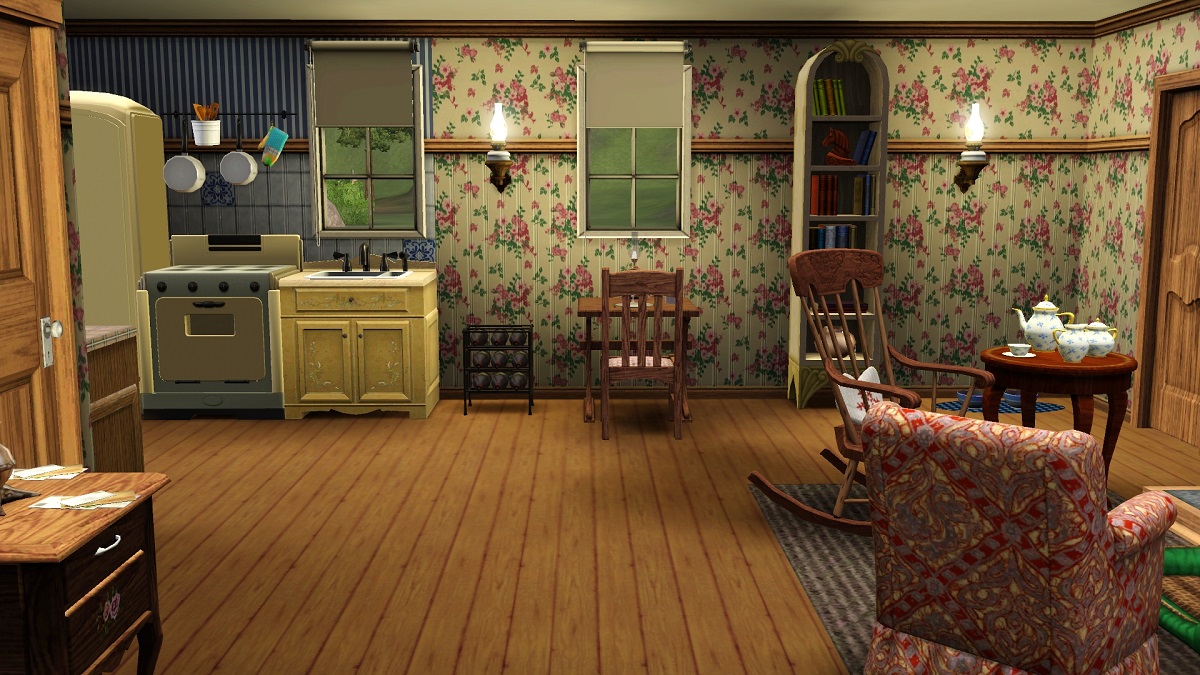 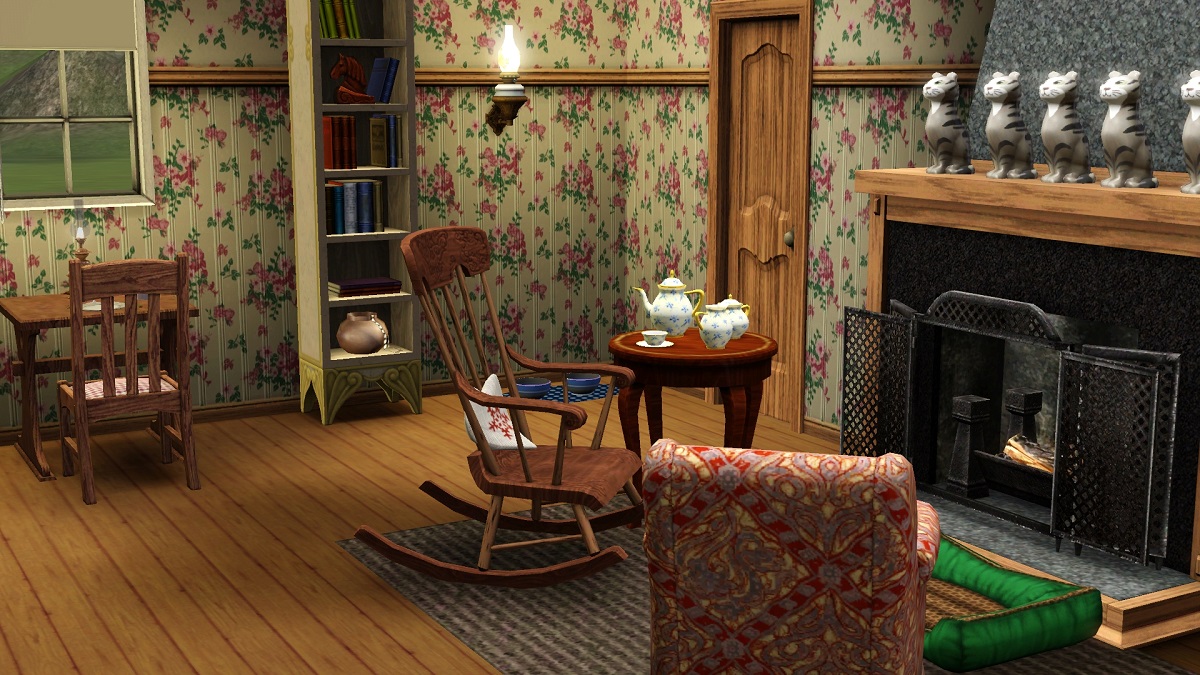 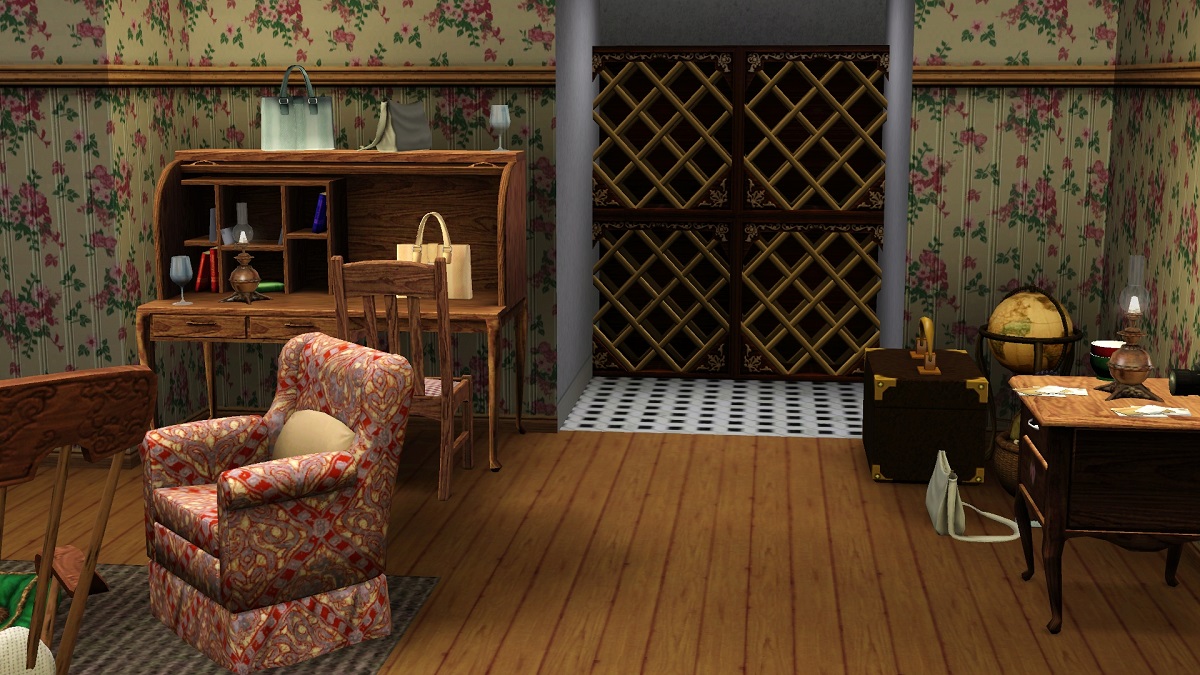 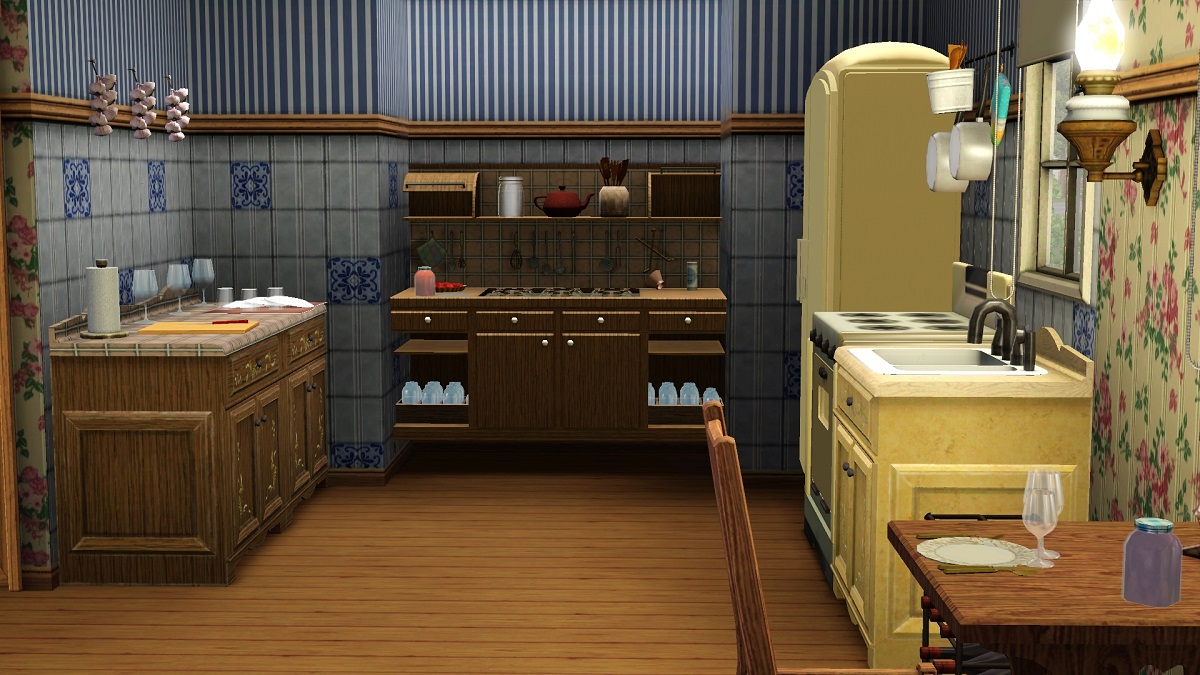 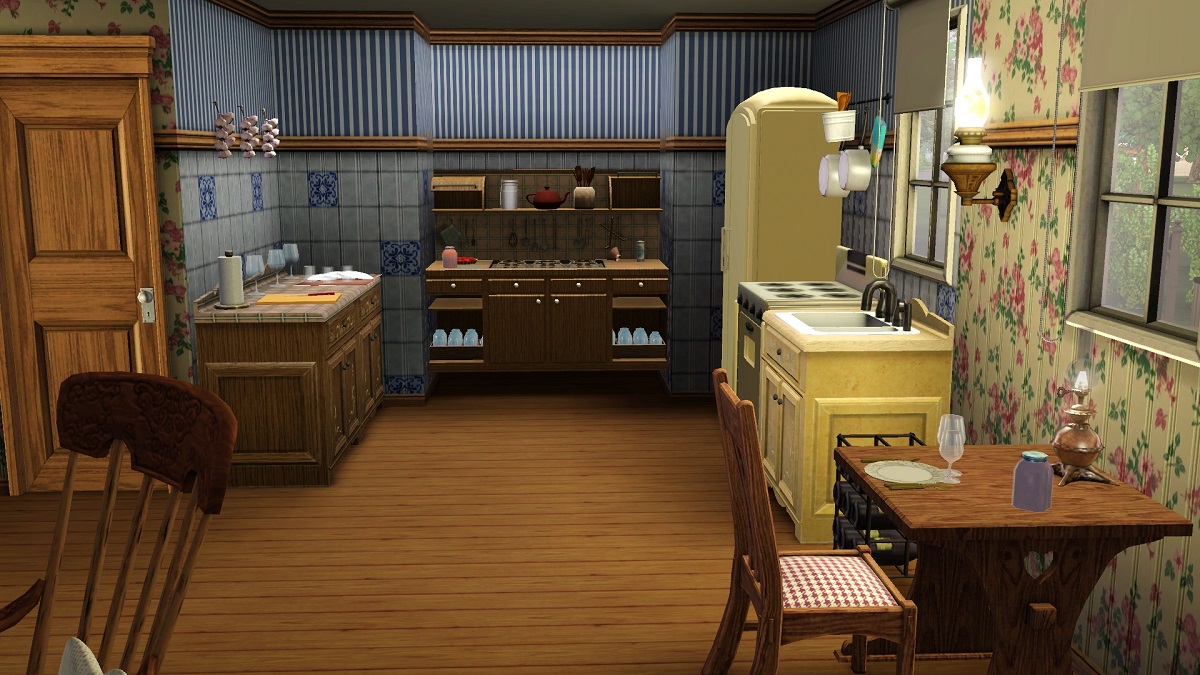 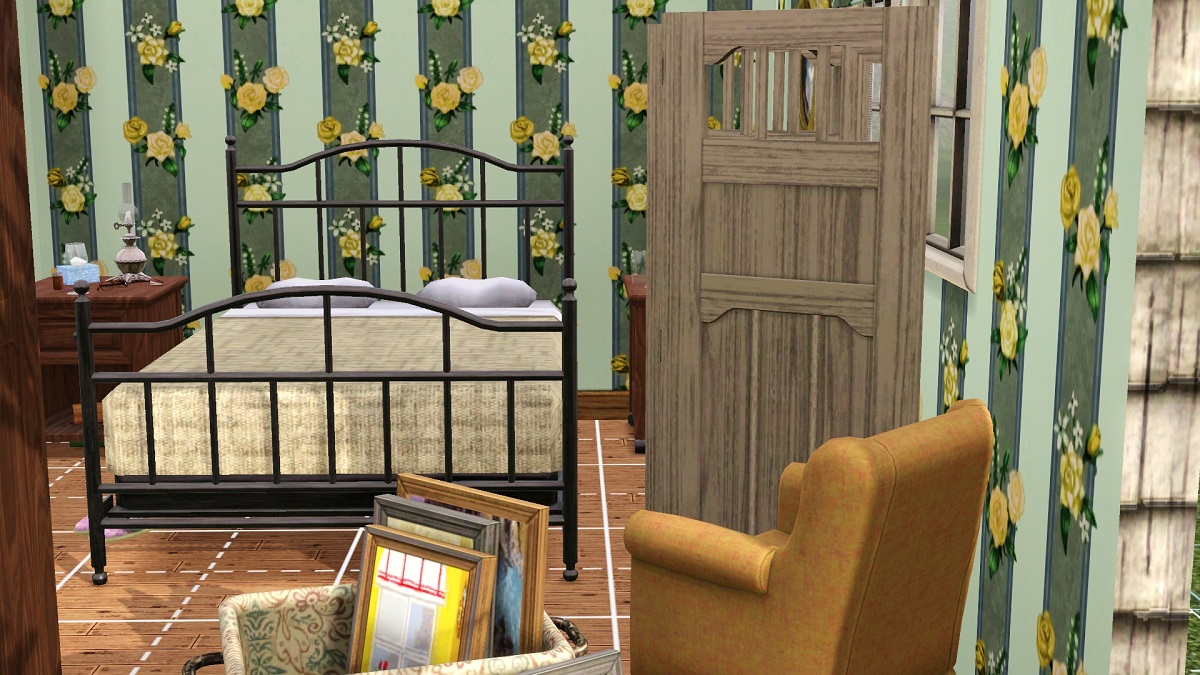 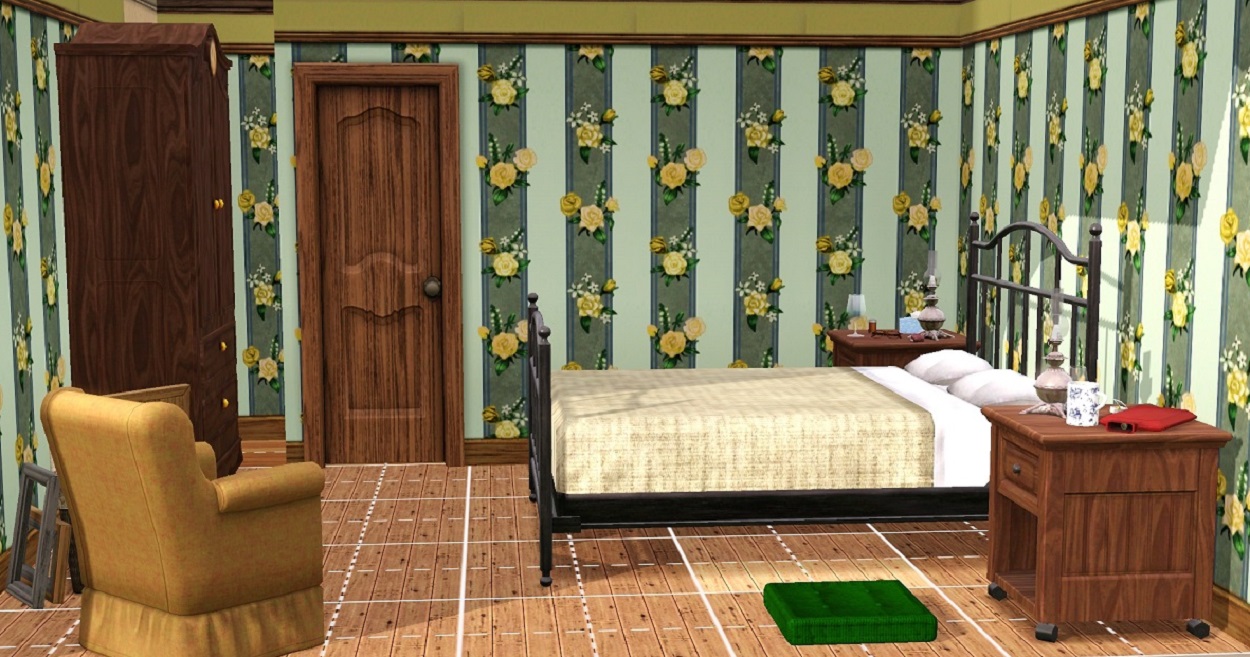 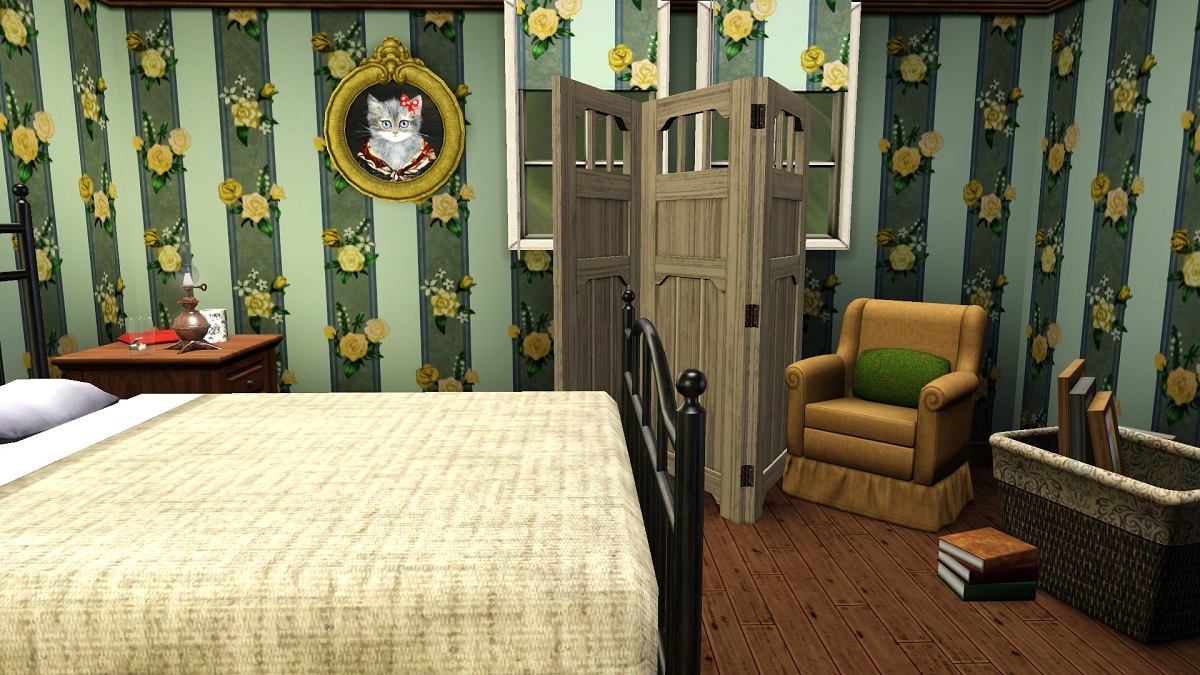 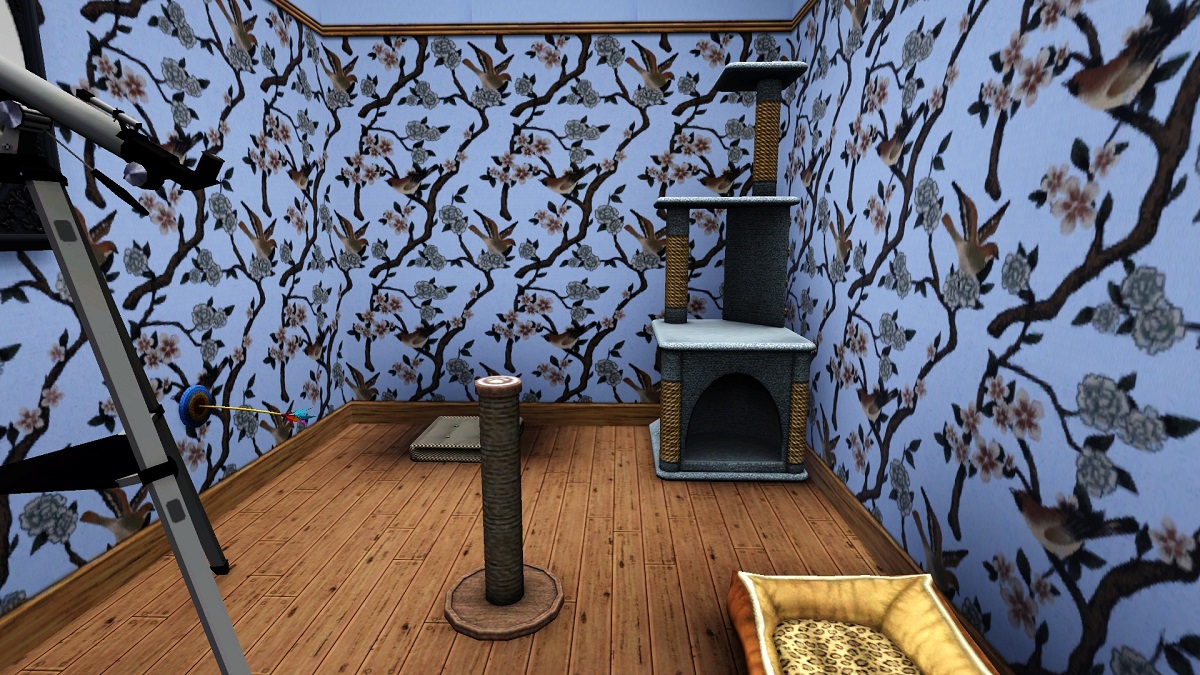 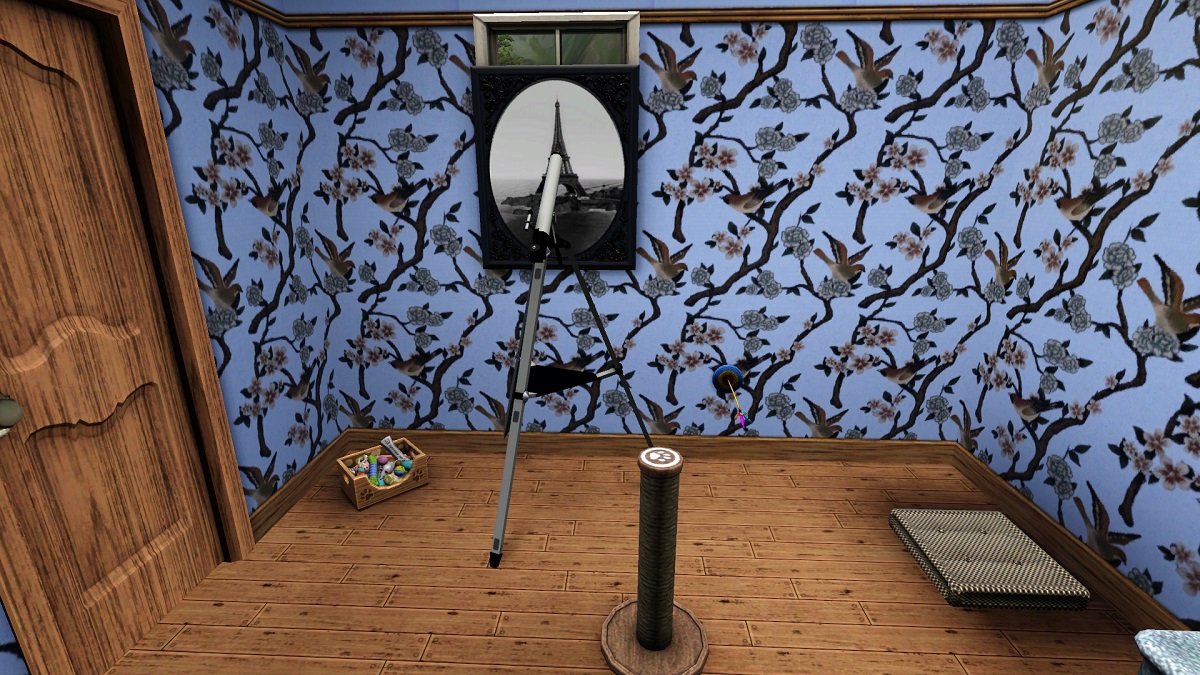 You murderer I love the contrast between Liz's sweet, frilly serial killer house (great work!) and the more obvious, windowless deen of floral doom. This thread is everything

Really though I can't thank you enough for your praise, especially once I saw your post! Your house is so cute and I can't even comprehend how someone who can match colors liked my gremlin-inspired build.
Crowkeeper

We were hoping that as members of the CroNor group, each of us would get the sticker for the Crumplebottom challenge

. Would that be possible?
Visit my Tumblr for more creations http://crowkeeperthesimmer.tumblr.com :)
Valdesca

i use some mods that check my stuff as cc like working alarm clocks and working medicinea cabinets, even this objects are on base game, Love this challenge but cant participate, great idea. Crumplebottom is my icon on Sims4 gallery,Ifound do funny this woman.
CatherineTCJD

I got the sticker in my list of stickers - but it is greyed out. It shouldn't be, should it?

@CatherineTCJD I'm currently doing the sticker rounds, so it should appear any time now