Hi there! You are currently browsing as a guest. Why not create an account? Then you get less ads, can thank creators, post feedback, keep a list of your favourites, and more!
Quick Reply Print version
Search this Thread
Replies: 756 (Who?), Viewed: 142859 times.
Page 31 of 31
AnMal

(Off topic, but I actually thought of Bellahouston Park as soon as I saw her name - been to see the House for an art lover twice and enjoyed coming through the big green area on my way there.)
Advertisement
Melancolie
Test Subject
#752

Can I ask where you found the glasses? I've been looking for some just like that!
AndrewGloria 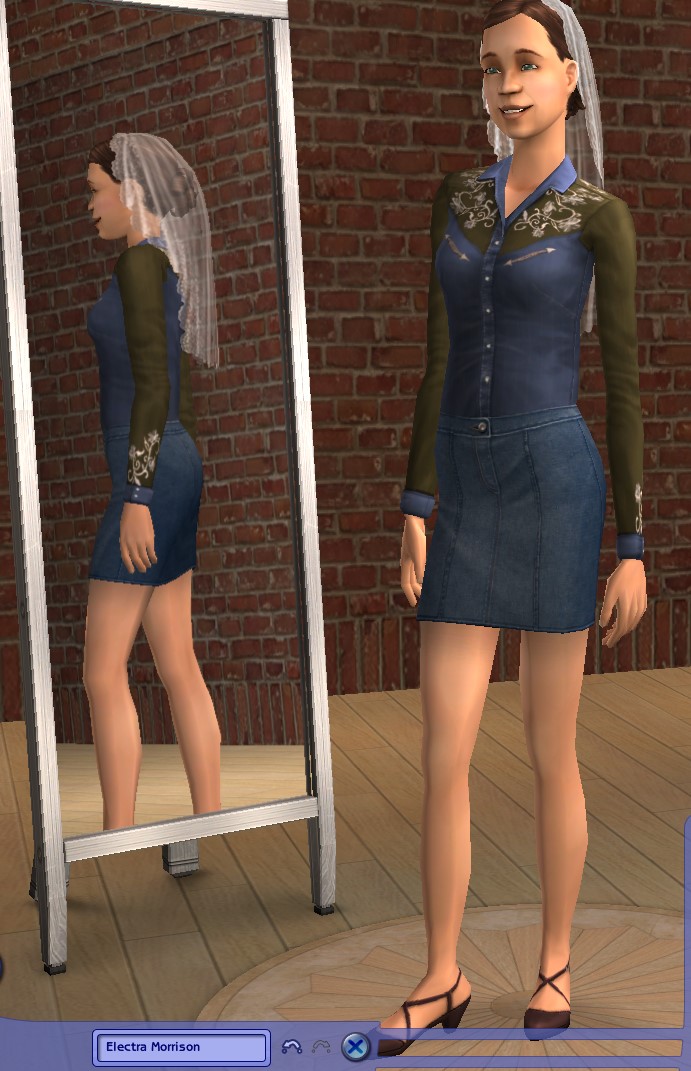 Almost every time I start the game, I open CAS and generate a few Sims there so as to randomise any Sims who are generated in the play session that i just starting. Rather often however, one of the generated Sims so catches my eye that I just have to save them to my game. Electra is one such. She generated two nights ago when I was "rolling the pacifier". As soon as I saw her, I knew I was in the presence of somebody special. I just had to have her in my game. As with almost all the CAS Sims that make it into my game, I tweaked her face slightly to make her truly unique. I've given Electra a little, very subtle Maxis make up. She would prefer you not to notice it.

Her outfit is just as she generated, and is 100% Maxis. The colour matching is so good I thought it must be a full body outfit. But no! The mini skirt and the top are well matched separates. The skirt is short enough that she won't feel out of place amongst other Veronavillians. But it long enough to suggest a wearer whose best qualities are cerebral. Like Andrew's school shorts, as he describes them: "Short enough to be sexy, but long enough to be respectable." Her hair with the short wedding vale is also Maxis. It's from the Celebration! stuff pack, which I've always had because it's included in Double Deluxe. The complete outfit (including the veil) looks like something that a really thoughtful, but somewhat unconventional, woman might choose to wear to her wedding.

Like all my CAS Sims, I've given Electra a full set of clothes, which I've tried to match to her perceived personality. For her formal wear I've given her this CC outfit by Bruno: 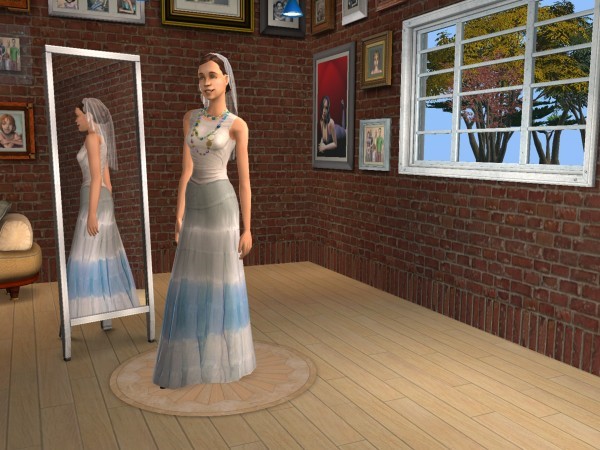 If she'd like something a little more conventional, she might wear this for her wedding. Not all that conventional though -- although it comes as a full body outfit for us Simmers, it's not actually a dress. It's a top with a long skirt. And of course it isn't pure white! 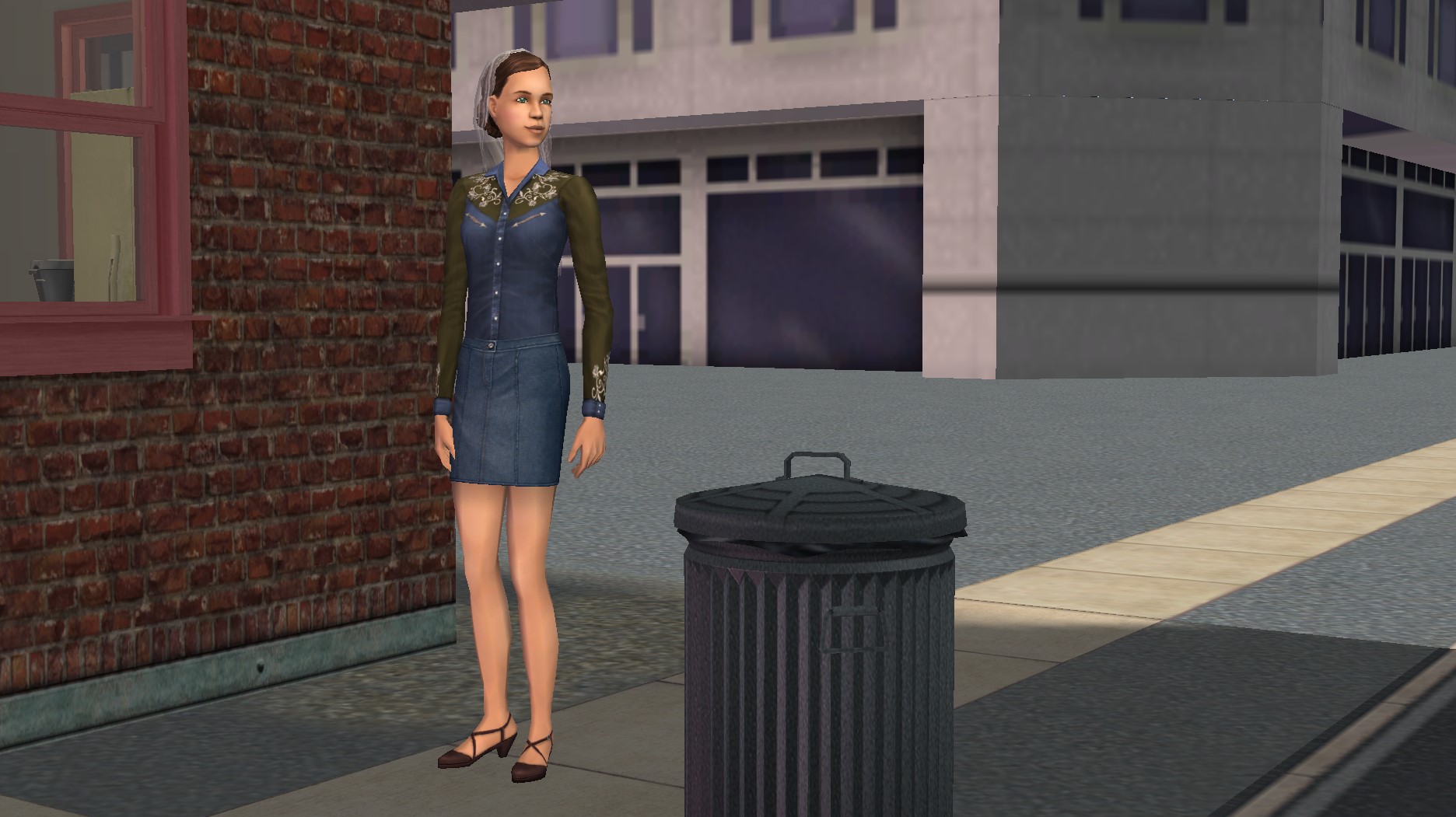 This is how she looked when she actually arrived in the game, in downtown Veronaville. Her name? Well there was a Morrisons supermarket receipt lying on the table when I made her, hence her surname. (It's actually the same Morrisons' supermarket where, just over ten years ago, I bought a heavily discounted copy of The Sims 2 Double Deluxe. I had no idea then how significant they'd become in my life!!) I was originally going to call her Flora after Flora plant-based butter (the main item on that Morrisons' receipt) but she looked so distinguished that I felt I had to think of a more distinguished name for her.

At the moment she's in the downtown changing hut with a friend. I was going to make her a townie, but I may find a little house for her instead. Even if I do make her a townie, I'm sure she'll become playable one day. She's made a really big impression on me.
All Sims are beautiful -- even the ugly ones.
My Simblr ~~ My LJ
Sims' lives matter!
The Veronaville kids are alright.
LauraPamplonaS 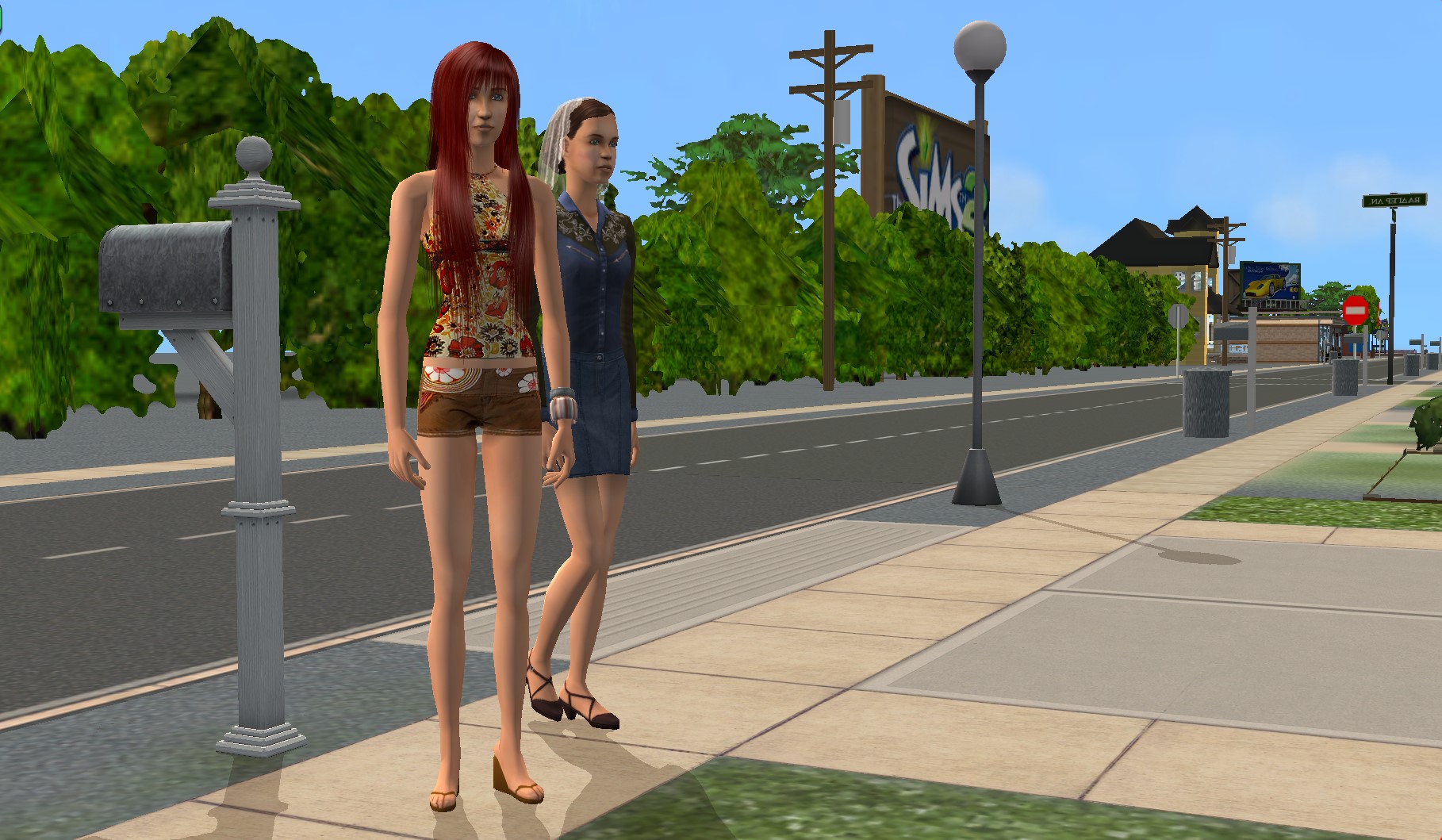 With her barely there CC shorts by OpenHouseJack, Kaye (Popularity, Cancer) is far more typical of Sims in my game than restrained and thoughtful Electra (Knowledge, Saggitarius).

And this is the house that they've bought: 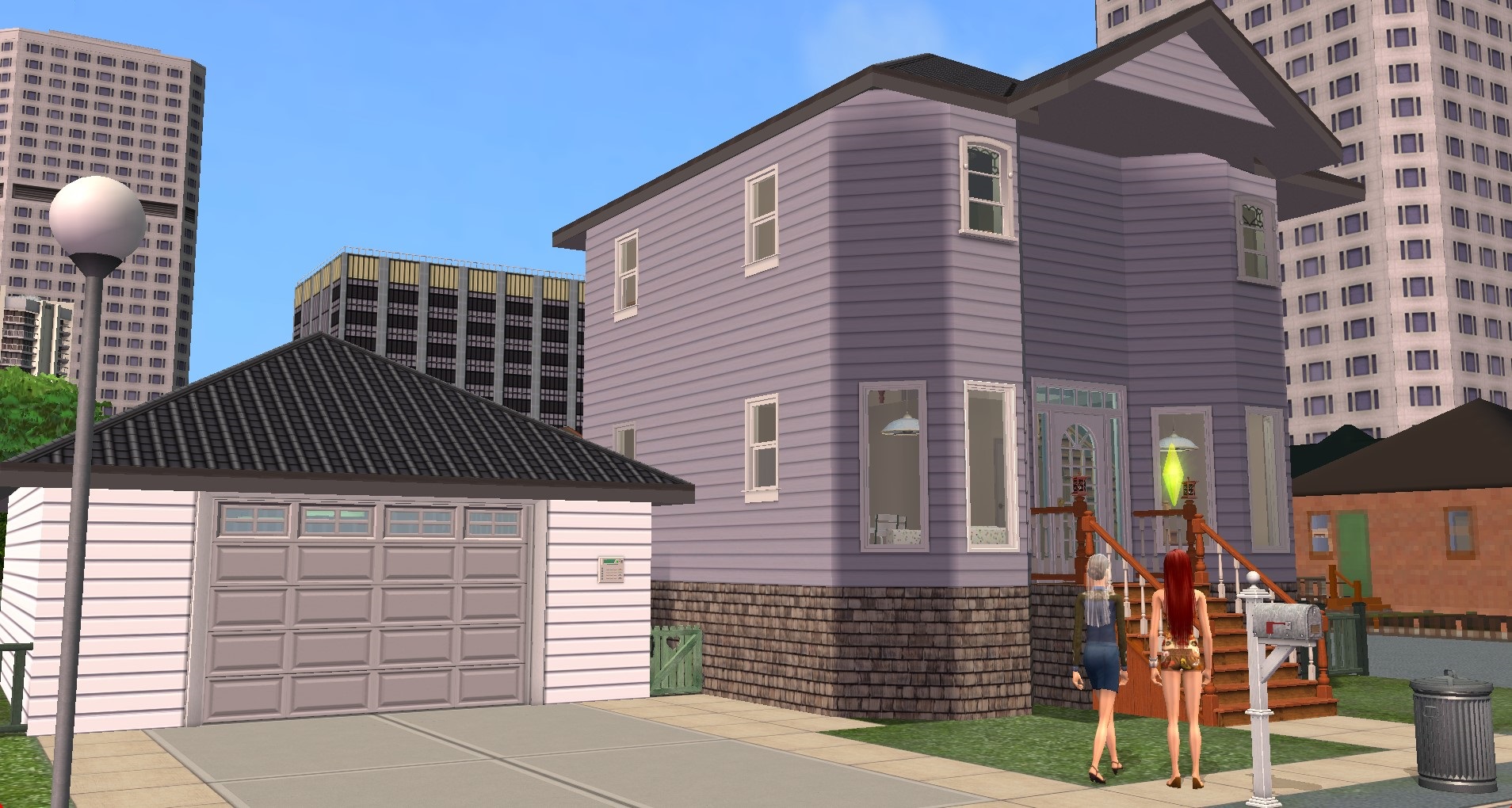 It really isn't a small house, but it's totally dwarfed by those skyscraper office blocks. I'm not sure how happy I'd be living with those towering above me. (How would other people feel about living here?)

Whatever else it is, downtown Veronaville is certainly a centre of LGBT culture. I wonder if Electra and Kaye might end up marrying each other.
All Sims are beautiful -- even the ugly ones.
My Simblr ~~ My LJ
Sims' lives matter!
The Veronaville kids are alright.
simsfreq
Mad Poster

The discussion about genetics recently made me pick up on this, I recovered a neighbourhood I thought I'd lost and I thought I'd share this sim because I love her face structure. In this hood I created starter sims according to a single trait - hers was education (career) so her name is Alma Mater, she is a teacher and her personality is 7/6/5/2/5 (Neat, quite outgoing, average activity, very serious, balanced niceness). It's also I think the first hood I used unbalanced sliders so there is asymmetry in a lot of the faces, which I *LOVE*.

I think she must be a no-nonsense straightforward kind of character, but she's not a complete dragon - she needs some compassion to deal with kids all day!

Interestingly I caught her when she had just woken up and was getting ready for work; you can see the difference make up and glasses make to her face! I'm proud to introduce Felicity Snob, a townie who married into a rich family. She is the first sim I have who was dressed by my little grand daughter. I think she did rather well; the hairband and eye makeup co-ordinate with the trousers, and she clearly understands colour theory with the top she chose. The lipstick though... shows her creativity, shall we say? She started off by saying she wanted the sims to have a 'green face'... I didn't show her the facemask section!

Really cool though, far more colourful and stylish than I can achieve!
I will choose a path that's clear- I will choose free will
-RUSH- -RADIO- -RADIO- -EON- -ARCHIVES-
Simpeople and Me Archive- -11Dots Archive- My Sims World Archive
Angel Classic Rock Mix!