Apartment Back Doors (using fence edging)
It was suggested by joandsarah77 that I post this as a thread so it could be more easily found by others who might be attempting this kind of design in the future, so here it is.

Question: Is it possible to make a functional "back door" to an apartment, that would allow Sims to enter or exit an apartment unit by a different route than the official apartment door?

Experiment: To test this, I made two tiny apartment units (as seen in the attached images) with appropriate AL doors on the front of each, but with a standard "normal" door on the back of one, surrounded on the outside by the lowest edging (found in the fences subfolder), and a gated backyard on the other, separated from the main apartment unit by that same low edging. (While not present in any of the screenshots, I also placed a dining chair in both the "front" and "back" sections of the lot, so as to have an object to direct Sims to interact with/go between) I will note at this point that such a design raises no issues in properly converting the lot to an "apartmentbase" designation. 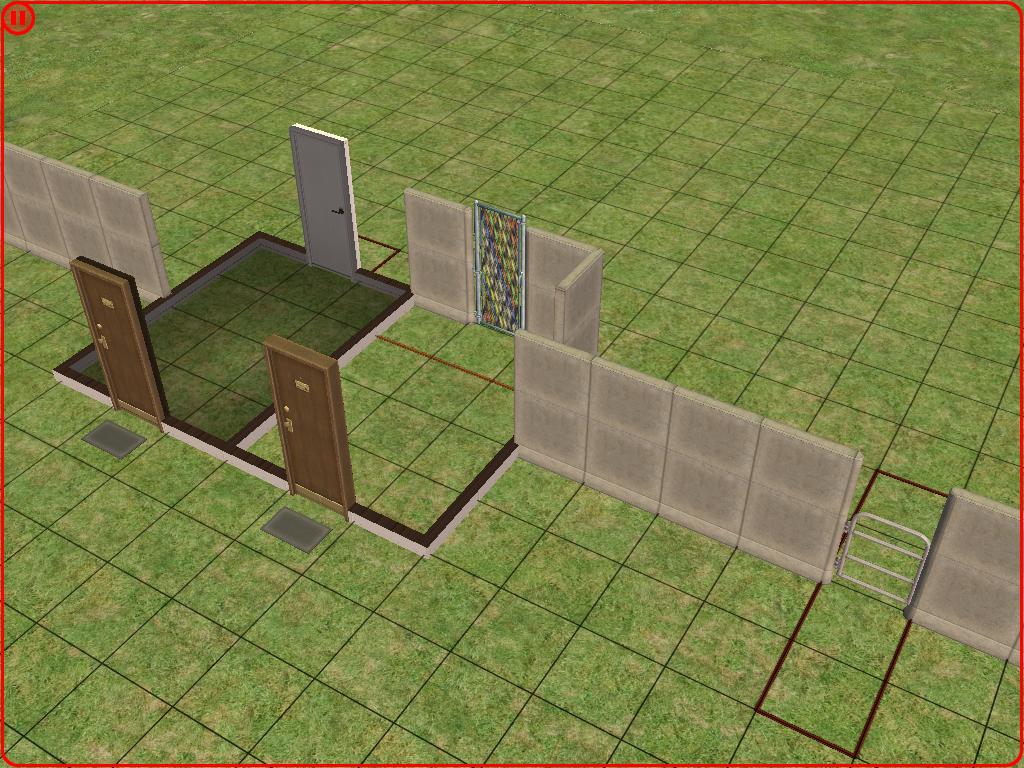 For the first round of the experiment, before converting the lot, I also created a fence completely dividing the lot (i.e., no route around the fence), so the only pathways through it would be to go through either of the apartments, or through a gate around which i placed edging on each side, to ensure that the number of "walls" a Sim would have to cross via that route would be equal to the number crossed by going through either apartment. (3 in all cases) My tester Sim was able to move into the apartment nearest the camera in the attached images successfully, as well as to exit out the back via stepping over the edging to reach the gate. Only when I directed him to stand near the public gate first would he route through it (essentially behaving as one would expect a real person to do)


I will also note that the female townie moving in next door moved in after my tester Sim had already claimed his apartment, yet to enter her unit, she walked through the apartment door of the unit claimed by my tester, out the gate, and then entered her unit via the rear door. I will also point out that my tester was able to enter the townie's apartment via the rear door (with no need to knock), upon which she became visible as Sims normally do when entering a neighbor's apartment. My tester Sim was then able to exit through the front door, but could not reenter through it, instead having to once again pass through his own unit and enter the townie's via the back door. 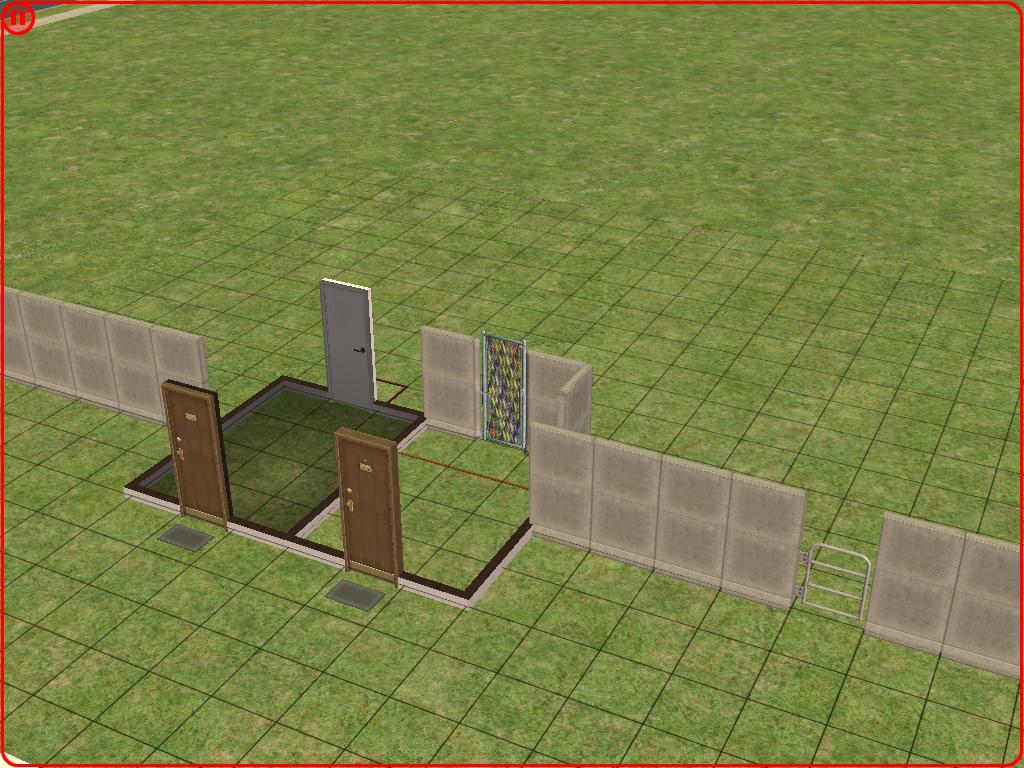 For the second round of the experiment, I moved the tester out, converted the lot back to residential, and the only change I made was to remove the edging from around the public gate, making it the route which required the fewest "walls" to be crossed. Once again I moved my tester Sim into the nearest apartment, and his behavior and routing matched that observed in round one. 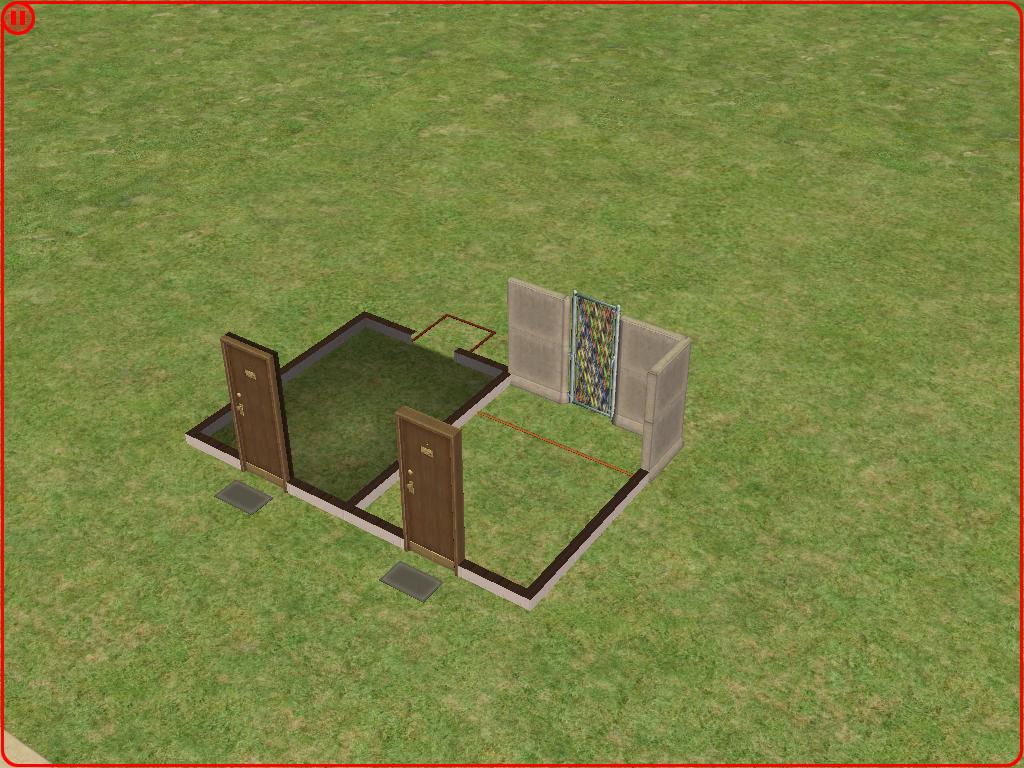 For the third round, I once again moved the tester out, converted the lot back to residential, and this time deleted the entire length of the dividing fence. I converted it back to an apartment, moved my tester into the nearest apartment once more, and in this case, his behavior changed slightly. While from locations within the apartment unit or the three non-unit "yard" tiles behind it, his behavior was the same as in rounds one and two, when my tester was outside the structure altogether, and directed to interact with an object directly opposite him on the far side, instead of the straight-line route through the gate, over the edging, and out the front door, he walked a slightly longer path around the exterior of the building (in much the same way many people do when going from a back yard to a front yard IRL).

Results: This experiment demonstrates that a working "back door" to an apartment can successfully be made in TS2, however as noted under the spoiler tag in round one, such a design does make it possible for townie neighbors to freely enter an apartment, a fact which should be remembered when using this approach for lots intended for normal gameplay.

Possibilities for Further Research: I would encourage others who are so inclined to expand on this research by testing such situations as having a secondary door which can be locked, to determine whether such design will prevent townies from passing through playable-owned units.
Welcome to the Dark Side...
We lied about having cookies.
Advertisement
Sims2Christain

Doctor Vu's secret apartment doors
Through my studies on this, the secret bookcase functions in the same way as a door because the game treats the fenced off area as another room in the apartment, whether it is behind a door or the revolving bookcase.

Lockablility of back doors
A secret bookcase entrance seems to be the only lockable way to prevent sims from entering a neighbors back door, locking the door in the Sims apartment then switching to another sim who lives at the same complex does not keep the door locked. (the locking of the door seems to only affects the sublot version of the apartment complex, not the apartmentbase lot.) Sadly I do not have any photos as of current, this is a observation that I had a while back, will repeat test asap.

It might be a little difficult to see, but I made a slight mistake when building one of the first apartment buildings in my city neighbourhood. I used one of the garden fences in front of the tall hedges cause it looked nice, and now I've got a perpetual crowd route failing. No idea if they're trying to get into my sim's unit, or one of the other 2 on the floor. I don't know if it means anything, but a burglar also came to rob my sim, but that might be because the apartments open to the outside world. Or can apartments just get robbed anyway? There's another picture for reference. Shame all the pictures of this one lot turned out so small, all the others from the same hood turned out fine.

I forget if I locked the patio door in my sim's unit last time I played, though with the pumpkins (those plants) being autonomous, it's a flawed trial.
WowoW it's a badly hidden owo UwU Yeet skeet Idk what I'm doing
Zarathustra

While testing a "real" lot I've been working on using this approach to apartment access, I noticed another interesting characteristic of entering or leaving an apartment by any route but the "official" apartment door. As pointed out above, the contents of an apartment do not appear when entering from an unofficial entrance, aside from those few objects which seem to always appear, whether an apartment is being visited or not (rugs, fireplaces, etc.), however the reverse of this is also true; that is, if a playable Sim enters an apartment via the official door, but then leaves via the alternative route, the contents of the apartment do not DISappear. They remain visible and able to be interacted with for as long as it takes before the playable Sim leaves the apartment via the official door, at which time they vanish normally.
Welcome to the Dark Side...
We lied about having cookies.
Back to top