A short guide to playing transgender sims in the Sims 2
[Disclaimer: I know some people don't like trans people and don't play trans characters. If you are one of those people, please move on. "If you don't have anything nice to say, don't say anything at all" ...thanks!]

I know a lot of LGBT+ people who like to play the sims. I myself am trans and play the sims 2 practically all the time (it’s a problem tbh...) But I love to play with trans sims! Trans sims are fun. But Maxis made it difficult to play with trans sims in the Sims 2. Fear not: modders all over the sims 2 community have made bunches of mods for the cool trans sims! I have compiled the ones I regularly use and recommend here.

Mods for all the Cool Trans Sims to Use

! NEW ! Download transition potions by Kestrellyn and LyleSnake to give your sim a happy memory of transitioning

!! NEW 2020 !!
Please, please, please message me or post in this thread with more links to trans sims 2 content, especially if you know of anything specifically for nonbinary sims, like using gender neutral pronouns or anything like that. Thank you!
Advertisement
kestrellyn
Top Secret Researcher

Is there any way to have sims transition over time without using sim surgery in SimPE or something like that?
LyleSnake

Not that I'm aware of. The most "realistic" way I could imagine would be, for example, to have a female baby be raised as male and treated as male, then at Teen years (puberty), have the trans girl "transition" and choose "treat as F" on the RCC from midge the tree. It will be easy since there are "make clothing unisex" for toddlers and children mods. Then when she grows up she can be a trans lady (even though code-wise she was female bodied the whole time, you can just pretend)
kestrellyn
Top Secret Researcher

Thanks! I've thought about playing trans sims before but was never really sure if I should e.g. take a sim that the game thinks of as male and change them to female to make a trans woman or if there was a better way like you described. The way I was thinking of it they would still have a male face, so that didn't seem very satisfying.

Edit: also, I like to randomly generate my sims sexualities but set the percentages of non straight sims high on purpose. If I Incorporated transness into my random aspiration generator, what do you think would be a good percentage of trans sims, big enough to not make them unicorns, but small enough to be at least somewhat realistic?
LyleSnake

I do it both ways. To me it just depends on the individual sim. But with the RCC you can change the gender of the sims easy-peasy. It even changes their voice, pronouns, etc. It doesn't change their hair or clothing options though, which is why I included so many different options for those.
Bulbizarre

I have a restaurant host that somehow spawned as a trans woman. Although her body is female (and she gets female options in the clothing and hair dialogs), her voice is male and SimPE says she's flagged as a male. 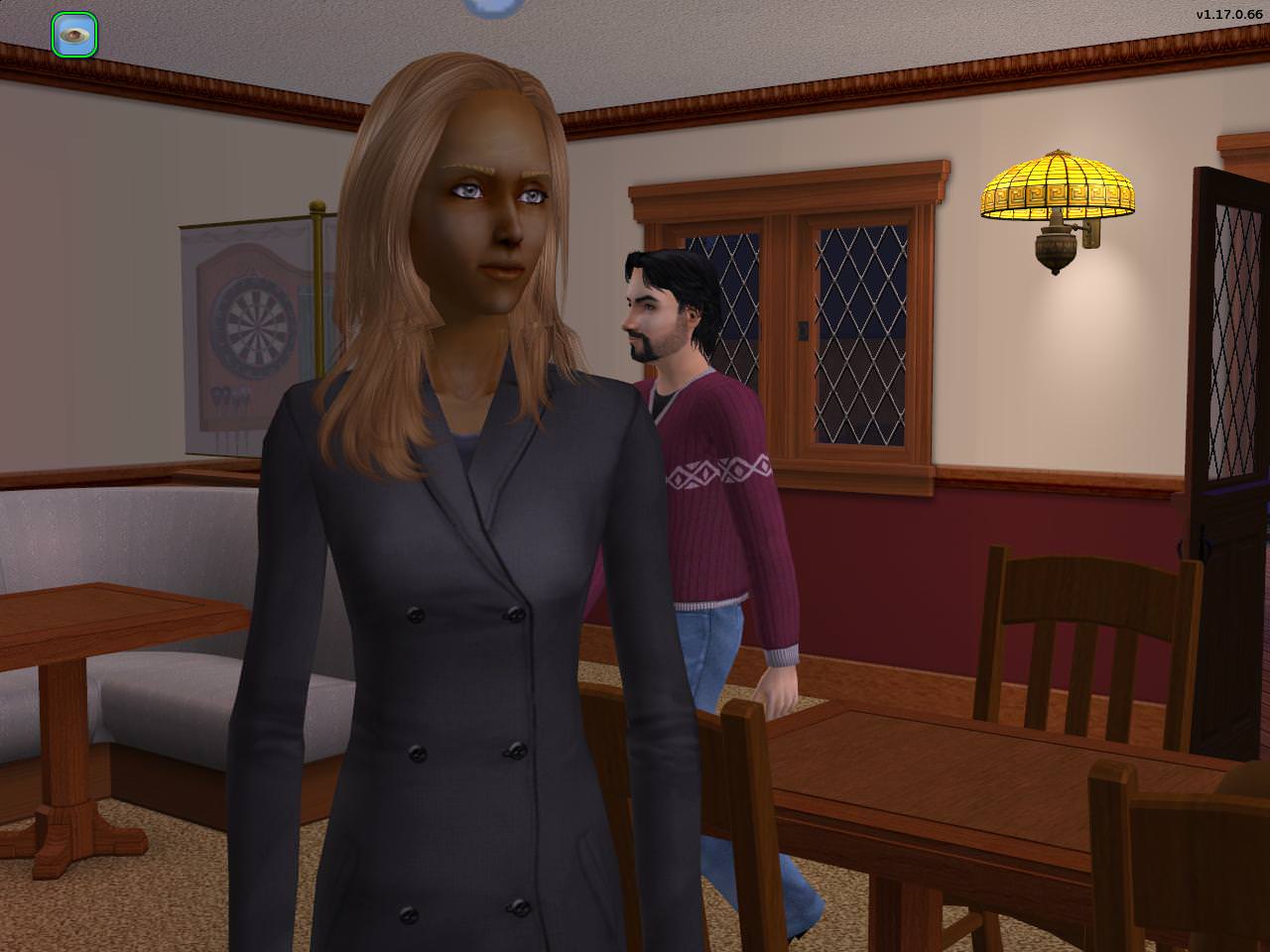 I once had the whole population of Belladonna Cove flagged as male adults (they were completely absent from the bin or the neighborhood, but could be summoned with Inges cat). This was right after I installed AL, I have no idea what happened.
LyleSnake

Well the conservative estimate of trans people in the world is less than 1%, but at least 25% of people I have known are trans. Granted, I'm trans myself so I probably have a biased view, but I think 20-40% would be a "small but realistic" number as you requested. I would not be surprised if there 40% of the worldwide population was transgender (or third gender, depending on the culture) if the stigma was removed.
kestrellyn
Top Secret Researcher

Yeah, that's how I justify my percentages, because even if the overall percentage is low, when you are queer you tend to know a lot of other queer people, and my neighborhood is not necessarily a representative sample of the entirety of simkind.
Rosawyn

To my knowledge, I've only so far had just one trans sim, and I think it happened about as "naturally" as it could have. A sim couple had a baby, and as it said "baby boy" in the box, I typed in a masculine name without further thought. When that baby aged into a toddler, it was immediately clear she was in fact actually a girl, and that there'd been a mistake with her assigned gender, so I changed her name to a feminine name at that point. I'm still not sure if it was my own error in somehow misreading "baby girl" as "baby boy" or if the game had some sort of error in the code, but since she was in fact assigned male at birth, and is a girl, I belive she is technically trans.
LyleSnake

I love hearing about your trans sims! Bulbizarre, your trans sim is so pretty. Thank you both for sharing! My favorite sims is a trans man named Rainy Blackwood. He is in the paranormal career, and he lives in a cool "witchy" house. 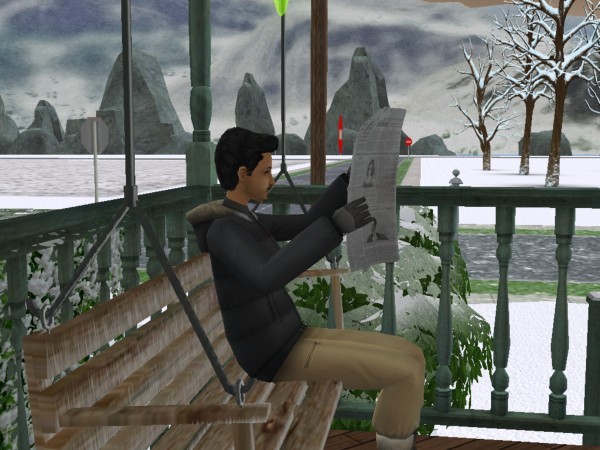 Here he is, reading the morning paper on his porch swing. 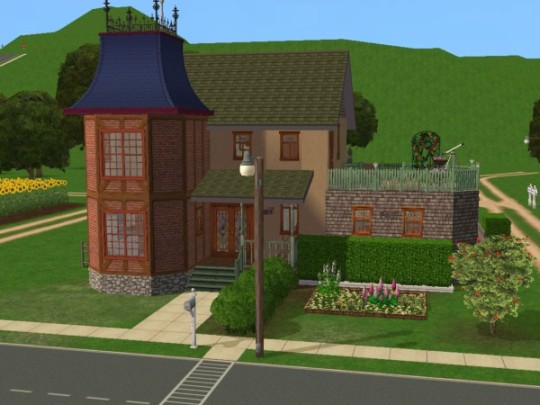 And here's his cute house.

She appreciates the compliments. I like to try to work game glitches into the storyline whenever possible. I made a thread about it, too.
I'm secretly a Bulbasaur. | Formerly known as ihatemandatoryregister

awhile back I posted a picture thread for these characters. http://www.modthesims.info/showthread.php?t=607734
joandsarah77


To me, that sounds more like intersex. Trans is to do with the brain while intersex people have a condition of the body. But this is sims so you can play that however you want.
"I dream of a better tomorrow, where chickens can cross the road and not be questioned about their motives." - Unknown
~Call me Jo~
Careers and businesses for sims
What I Love About Toddlers
Rosawyn

Quote:
The thing is, many intersex people are also trans, at least in that the gender they were assigned at birth does not match up with their gender identity. I was going with the definition of "transgender person" as "a person whose gender identity does not align (or fully align) with the gender they were assigned at birth." I know definitions differ and are also evolving, and I do agree that this particular case does seem very much like an intersex one, not simply a trans one.

I read about an interesting real life case where a middle aged man discovered that he had an intersex condition and "should have" in fact been assigned female at birth. He did however very much identify as male and in fact was seeking treatments to bring his body more in line with that. The article's headline quite rudely claimed that he'd discovered he was "really a woman," which was not the case in the slightest. What he discovered was just that he had some internal organs he didn't expect.
joandsarah77

That's the fault of the adult assigning them a gender in the first place. Parents and doctors need to stop playing judge when the gender is ambiguous. Occasionally mistakes are made but that's different, but if they honestly can't tell what gender a baby is they should assign none and wait and see. Most children know who they are by 3 and certainly by 5. If an intersex person was assigned as female by doctors and parents at birth but turns out to be male, this doesn't make them trans, it means the parents and doctors assigned them the wrong gender. This happens too frequently and can be a terrible thing as many intersex children were subject to operations deemed to make them more like their 'correct gender' which later turned out to be wrong. I'm a moderator on a genital integrity board which is against any form of cosmetic surgery on minors. This is kind of off topic though. Thankfully your sims can be whatever you like. Sorry I derailed the thread.

Let's get back to the topic of sims.

"I dream of a better tomorrow, where chickens can cross the road and not be questioned about their motives." - Unknown
~Call me Jo~
Careers and businesses for sims
What I Love About Toddlers
LyleSnake

Does anyone know of any mods to make a sim non binary, like a mod that enables using "they/them" pronouns?
LyleSnake

Joandsarah, being trans just literally means that you were assigned the wrong the gender at birth. Intersex isn't necessarily related to what gender you were assigned or whether they got it right - it's a set of conditions where your physical sex doesn't 100% align with traditional ideas about what male and female anatomy and chromosomes look like.
joandsarah77

Mod hat: I am not here to argue with anybody, when I said back to sims that's what I meant. I know you like to engage me, I have noticed. Well, this is my last post about this because I won't engage any further.
I am only interested in the rights of children to bodily integrity and that is all.

So one last time, can we get back to sims now?
"I dream of a better tomorrow, where chickens can cross the road and not be questioned about their motives." - Unknown
~Call me Jo~
Careers and businesses for sims
What I Love About Toddlers
kestrellyn
Top Secret Researcher

I only posted to correct misconceptions, as a lot of people might not know what these words mean, precisely. I was not "engaging" you, nor have I ever, to my recollection.
Rosawyn

Quote:
Unfortunately I don't know of any mod that does that. I wonder if it would even be possible, given the way gender is handled in the game.
LyleSnake

In both cases, modders completely removed all references to gender in favor of gender neutrality. I would really prefer a third option instead of no options, though. Maybe it's easier in the sims 2 to add a third gender?
Charity

Warning, Adult Site! Do not click if you don't want to see penises. Here's crammyboy's cock mod for females. http://www.sexysims.info/download.php?t=170294

Blowing my own horn, I know, but the elders never get any love. https://www.modthesims.info/d/604828
LyleSnake

According to the comments on the penis mod, it conflicts with the male version.
Thank you for the elders skirts! My old ladies will be so happy now