CAW Experiments
I have recently been working on a potential world in CAW, which quickly turned into a testing ground for some new ideas and trial-and-error.
The single-largest task is likely a massive lake in the hills. I have never attempted water planes and always built my lakes as normal "sea level" water. This would not have worked in this case, as raising sea level to where it needed to be would have flooded most of the map (and turned that nice lake into nothing more than a bay). Some time ago, I tried to understand lakes when I had an idea to extend the lake (and in turn the city in and around that lake) in Into the Future's Oasis Landing. Thankfully, simsampl provided some links to some nice threads and articles on the subject of water planes in response to the resulting thread. Unfortunately, the information provided in them was WAY to complicated for me!

More recently, after finding myself craving a very specific style of world, and not being 100% satisfied with any I have found (that I can manage to get working), thanks to some help from someone who was patient enough to put up with my pickiness in this case (sorry about that by the way, KatyFernlily), I have decided to do some poking around in CAW. Using a heightmap from Tangrams of Lake Charles, near Walnut Ridge, Arkansas (which I honestly didn't realize at the time of getting the heightmap that it was of a lake), I plan to build a small farming town on the banks of a river. The region includes a large mountainous area (for forests and such) and LOTS of flat land (for farms and the town). While smoothing out the terrain is when I noticed the valley for the lake. Not realizing it was actually supposed to be a lake, I began the long task of trying to comprehend water planes. Thanks to some help from igazor on a thread I made trying to figure out how hexadecimal math works, I managed to get all of the water planes imported into my world to form the lake. See image below (I'm quite proud of it, myself; thank you igazor!) 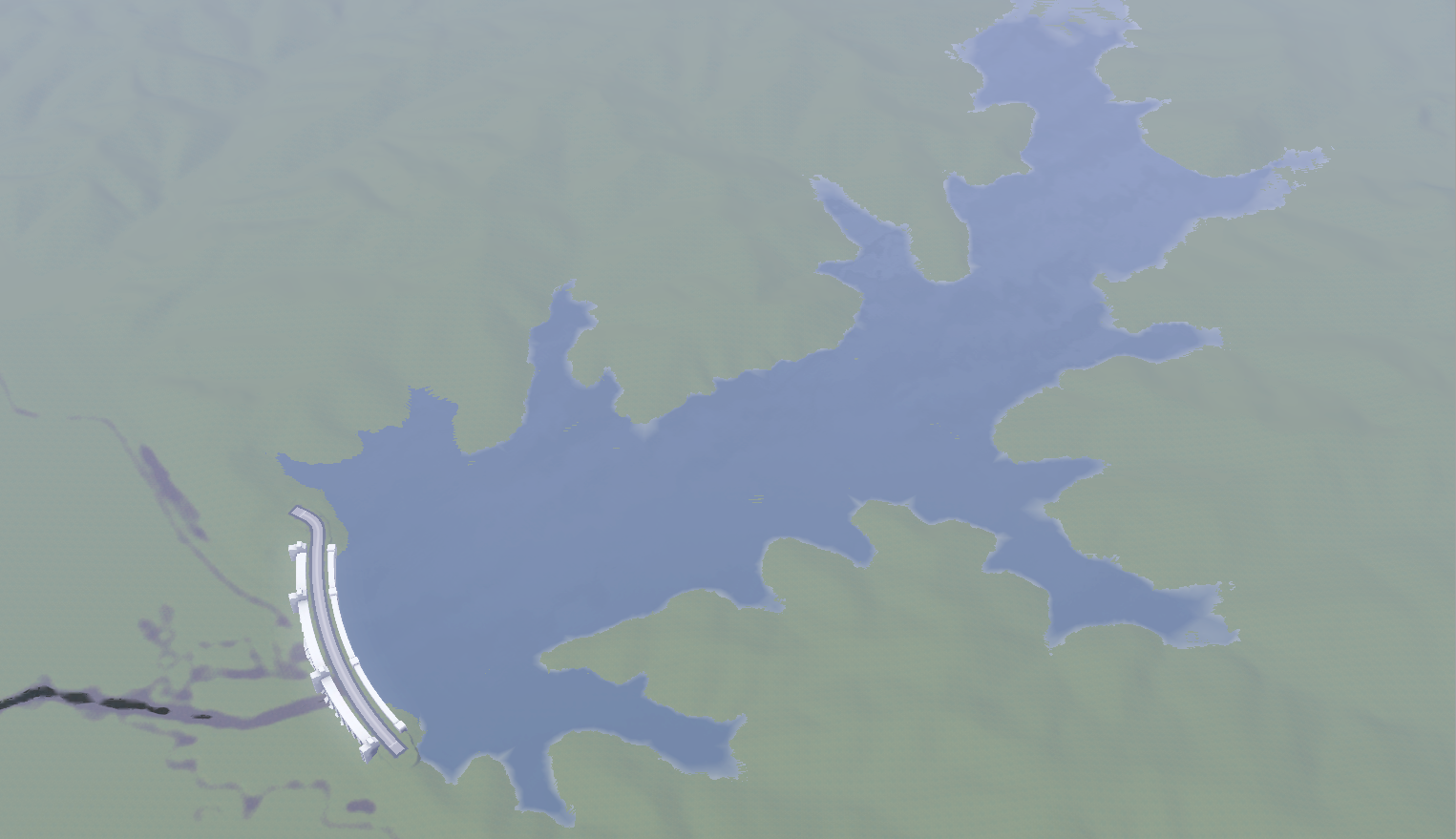 With the lake finally out of the way, I can begin working on the rest of the world. This world is heavily American, meaning my goal here is to make the world feel as possibly close to real-world rural American regions (specifically, the Mississippi River Delta region of Arkansas). While laying out some key roads, I noticed something very lacking from the game that is almost a constant in this kind of region: road grime! The roads here are NEVER clean. Cars and trucks are always driving all over them, and no one has the money or time to constantly maintain and repair these roads.
On to the next experiment for this world: new road textures, especially with dirt, cracks, and overall rough grime. Fortunately, I have another game which has a strong focus on a realistic America (ironically made by a Czech developer): American Truck Simulator. This made my first step be to extract ATS' files to get at the road materials. After some Paint.Net work of copying, overlaying, merging, and blending, I have come up with a few different kinds of roads.
So far, I have made one new road texture (well, two: a road texture and a "sidewalk" texture for the shoulders) to make a concrete highway: 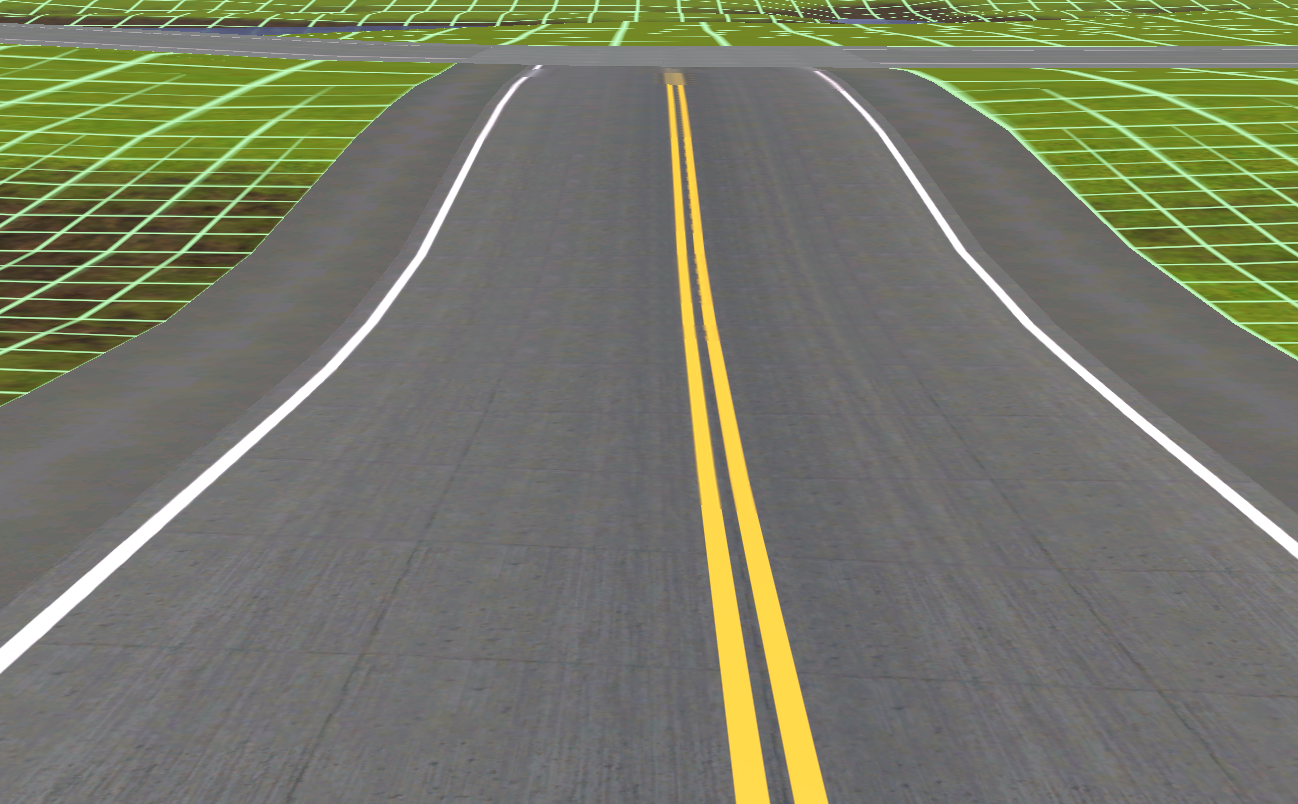 The shoulders are not all that pretty. I have a LOT of work to do with them. One detail I REALLY want to add is rumble strips, but these are supposed to be 6 inches from the white line and extend onto the shoulder. The only way to do this would be to place the rumble strip on one edge of the "sidewalk" texture and just get over the fact that it will be a bit further than 6 inches from the white line. I would be perfectly fine with this, but unfortunately the way sidewalk textures are handled would not allow this to work. The sidewalks face the same direction on both sides of the road, rather than facing opposing directions. This means that if I place the rumble strip on the left side of the texture, it will appear to be on the close side (nearest the white line) on the right shoulder, but on the far side (side nearest the grass) on the left shoulder. The only solution would be to place the rumble strip in the center of the shoulder or simply cover the entire shoulder with it. Neither of these options would look good, though. I suppose it would be possible to texture the entire shoulder with the rumble strip, then use an opacity layer which would remove the outer half of the shoulder (rumble strips do tend to take up the entirety of thin shoulders), but I have had bad experiences with sidewalk opacity in the past.

Beyond concrete highways, I have also made some dirt/grime textures. Due to the way the pavement textures work (similar directional format as sidewalks, but each LANE is 2 pavement texture tiles wide (4 for the entire road, excluding sidewalks), it is either not possible, or just very hard, to texture the grime onto the pavement itself. This is when I turned my attention to "road details" (aka, road line textures). I can place the grime texture onto the same file as the road lines texture, as that one image tile covers the full width of the road surface (again, excluding sidewalks). So far, I have 3 different kinds of road grime: a low (barely visible) amount, a "medium" (still kinda light, in my opinion) variant, and a similar to "medium" but with some actual dirt on the edge just outside the white lines. See image below. 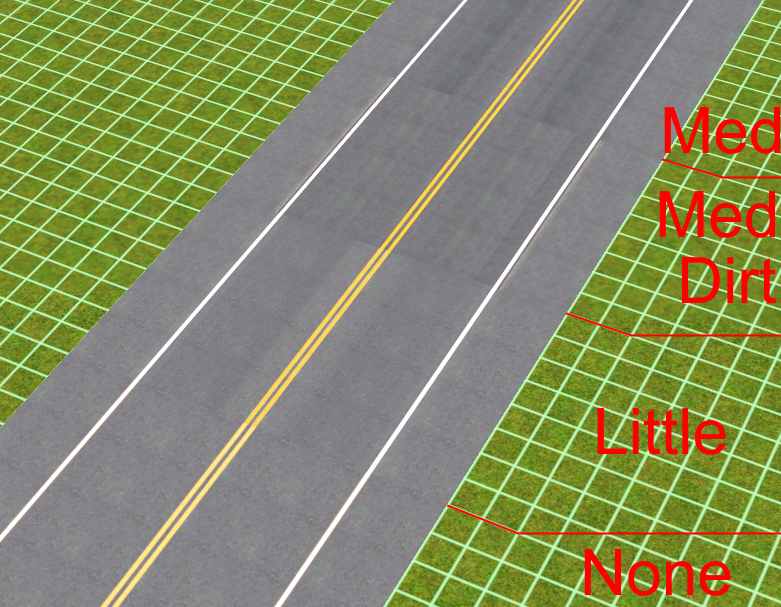 Again, it seems that, unfortunately, such details can not be applied to sidewalks (and therefore the shoulder).

This is my current progress on my little experiments. I just felt like I wanted to share in case anyone else is interested, or maybe has done the same as well and also wants to share.
Feel free to share your own little CAW experiments that seemed a bit odd or different from your normal CAW experience.
Advertisement
Crashley1784
Lab Assistant

I too struggle with roads and am finicky about how they look. I have found, however, that effects on sidewalk tiles are mirrored correctly. For example, I made a "sidewalk" tile texture that matches my road texture and has a curb on the outside edge. When I use the sidewalk texture on my custom road, the curb shows up correctly, on the outside edge of each side. I've attached a screenshot of my wide road with curb, as well as the textures I made. I did an experiment with having the curb in the middle of the tile and making a custom opacity to only show half of the sidewalk, which worked fine... I just ended up going with the full-width, as it was going to require some time-intensive work on making custom sidewalk corner textures that I was too lazy to mess with. You might also use one of the "dirt" sidewalk opacities and terrain paints to give the appearance of dirt and grass encroaching the shoulders of your highway, so it's not just clean, straight lines on the edge.
http://www.facebook.com/groups/sims3caw
daisylee

I really like what you have done.
Crashley1784
Lab Assistant

So, I know it's been a month now, but I just can't get these sidewalk textures to work right.
Here is a test of a concrete road (such as what is used on bridges) using heavily edited textures from American Truck Simulator (the textures in that game are actually designated as bridge textures). As you can see, the drain grate appears right next to the shoulder line on the left side, but next to the grass on the right side.

Is there some special method to make the textures mirror like is expected? Also, is there some trick to get a road texture to stretch all the way across the road instead of tiling? The main road surface here is using Concrete02. I made 2048x512, compared to the 512x512 of the default texture, in the hopes that making 4 times wider would allow it to stretch over 4 times the area (which would cover the entire road), but instead it resized the texture back to 512x512 on the road surface. It still works a bit better than Concrete01:

I've managed to make several new road detail files (84 in total). I started with the default road lines, which I fixed using this method so that the yellow and white lines keep their color when in low LOD mode (looking at them from a long distance). I decided to make new road lines that do not have the white shoulder lines. In the United States, shoulder lines should not be used on roads with curbs or sidewalks, as there is no longer a shoulder, with the exception of wide roads to include shoulder space before the curb (or a bike lane, which also has a white line). However, Sims have no conception of bike lanes and such.
After making my non-shoulder variant, I decided to make several other versions with only a right or left shoulder line, a right or left or center single yellow line, etc. I also have a blank, no line version. There are 14 total line variations. Below is an image of all the files for the plain version.

After I have made all the lines I want (for now, at least), I moved on to making wear-and-tear details on all of them. I have 5 versions of these details, on EACH variant of line, as shown below.

These are made by increasing the size of the line files (from 1024x32 to 1024x128). This allows for more of the details to show up and take the proper amount of space of the road surface. I then place the details on a layer above the road lines (so that the lines are sometime covered by the details, resulting in a more realistic look).
Here are some roads showing off some of these details.
From left-to-right: Worn, Dirt, Cracked, Concrete 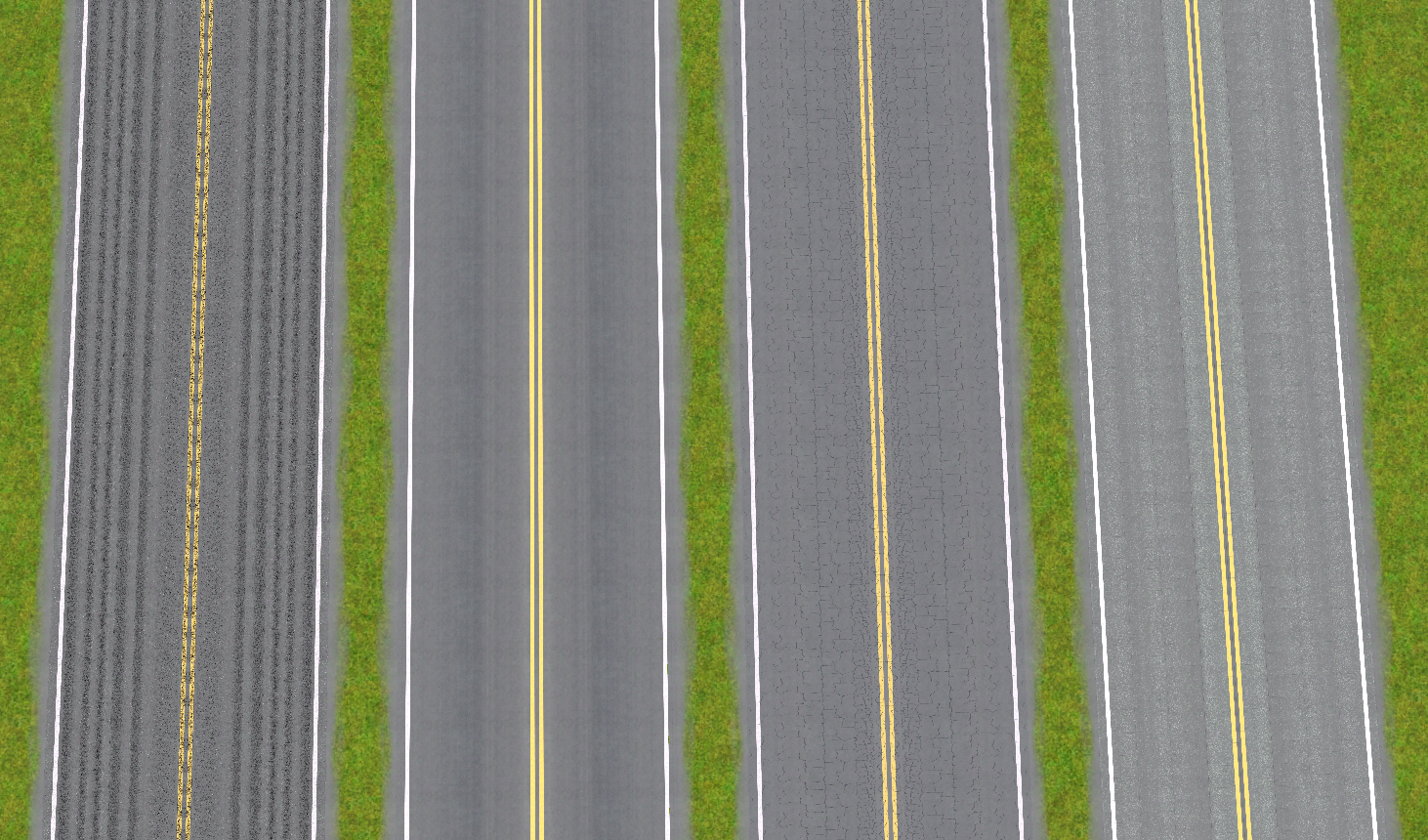 Here are some closer images, showing them in more detail: 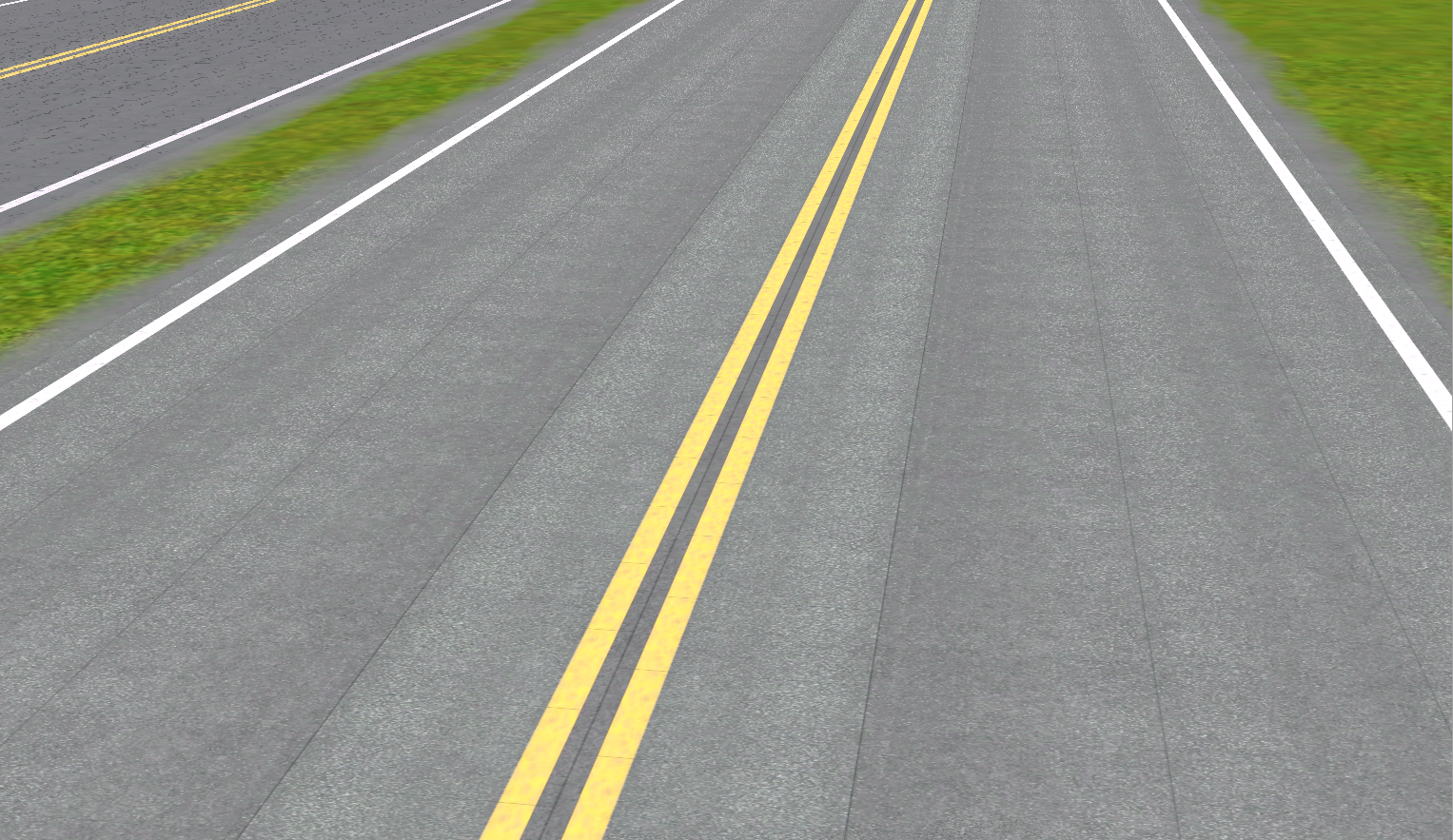 Notice how some of the lines are covered and distorted, such as on the Worn and Cracked version. This make the roads look much more realistic, compared to the road in the previous post, which also uses the cracked version, but was before I decided to place the details above the line instead of below it.

[EDIT]
Some trial and error resulted in a rather interesting passing zone. If only the traffic acted properly and a slow or stopped car would slow down or stop the cars behind them, unless they could switch lanes and pass... 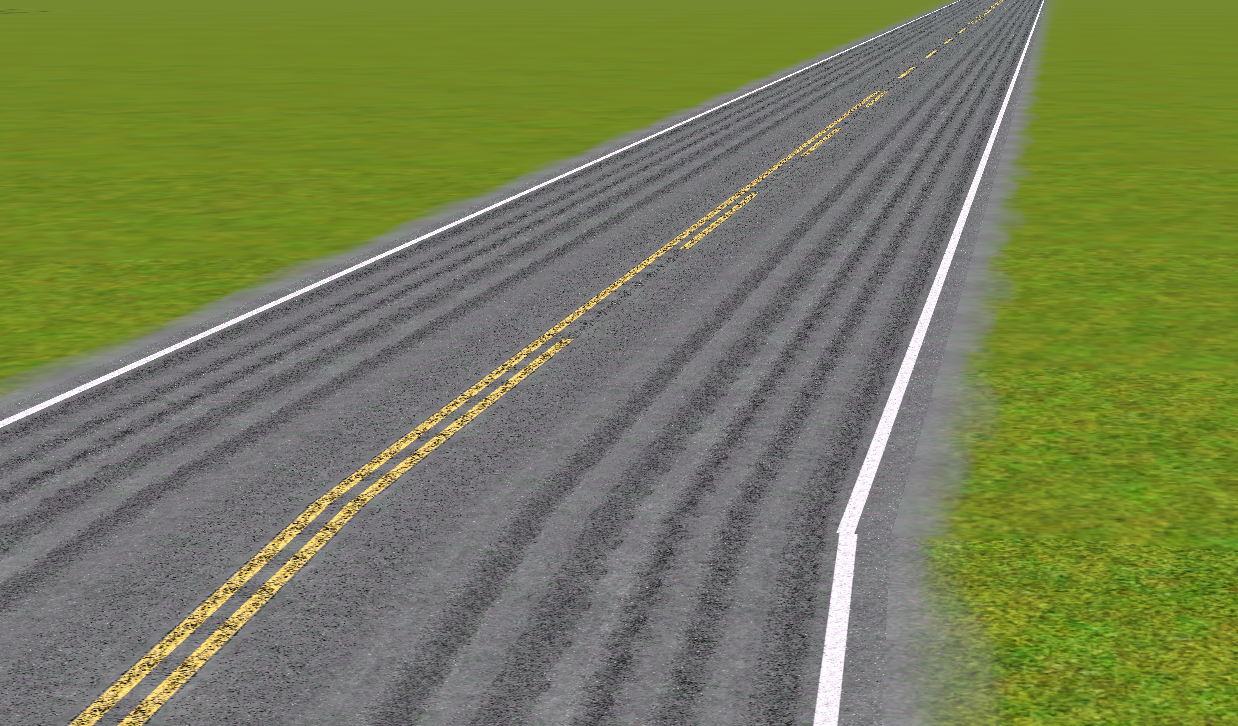 I feel kinda dumb right now. Here I've been trying to get sidewalk textures to work correctly so I can place rumble strips on them. Turns out, they can fit rather well between the white line and the edge of the road on the detail file. They are bit too close to the white line, but I think it looks decent, at least for the thin shoulders. I'm not sure how well it would look on a wider shoulder. 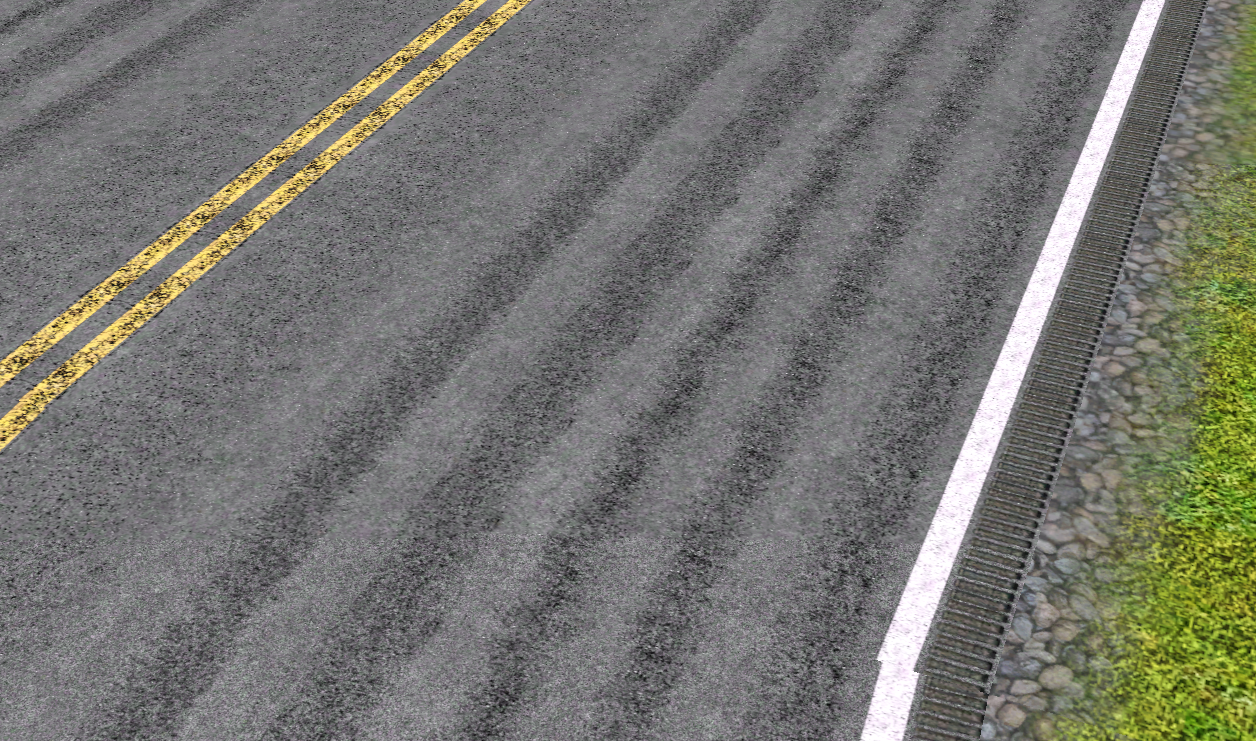