Now, that would have been worth reading about!

Receptacle Refugee & Resident Polar Bear
"Get out of my way, young'un, I'm a ninja!"
My downloads of various stuff: https://www.mediafire.com/#myfiles (including funerals!)
Kligma

And it must be effective as a hide-out for sims, the lot hid from me for 16 years after all.
I am Error.
Orphalesion

It wasn't that brilliant or entertaining. From what I remember I had Don and Nina marry because she got pregnant from him, they had a son called Ron. When Ron was a child Nina ran away and became a vampire. Don, of course, neglected his son and they hated each other (it's really easy to make Sim kids hate their parents in Sims 2, just make them watch their parent make out with someone who isn't their other parent) Then when Ron was a teenager, Nina met up with him and made him a vampire too. I had downloaded a mod that allowed vampires to kill other Sims (and also a mod that made the vampires not blue), so of course I had Ron kill Don, because "I WILL NEVER BE LIKE YOU, DAD!!!" and then he hid away in that hidden hermit lot.....until he met Bella Dreamer, the daughter of Cassandra and Darren (this was before twilight!, or at least before I became aware of twilight? I'm not sure). She saw that Ron wasn't a monster, just hurt (

) . I downloaded a vampire hunter career for teens so that Bella could be Buffy.
And then I lost interest in that neighbourhood because I found University too long and boring.
Also Bella Dreamer had a twin brother named Scott, because I thought Cassandra's face looked like the X-Men evolution version of Cyclops, and yes he ended up looking much like his mother, and I even gave him the basegame glasses with the orange lenses so he could look like Cyclops.

And that was my first time playing Pleasantview
Avatar by MasterRed
Taking an extended break from Sims stuff. Might be around, might not.
sugoisama
Forum Resident
#9129

"It was true love between Bella and Ron, the vampire. I then made Bella a vampire hunter."
I'm sorry, are you really just gonna drop this bomb in here and go away? What volume of Tokyo Ghoul is this??
Orphalesion

I'm afraid it's not that spectacular, I just wanted to play a Sims version of Buffy and Angel haha. So Bella was out hunting the "evil" Vampires while going steady with he "good" Vampire, Ron.
Though, since Bella was the child of Cassandra and Darren, I had a black Buffy looong before the rumoured reboot!
Avatar by MasterRed
Taking an extended break from Sims stuff. Might be around, might not.
LiliLiliLili

Not today, but sims eat while sitting on this cc object from Castaway Stories. 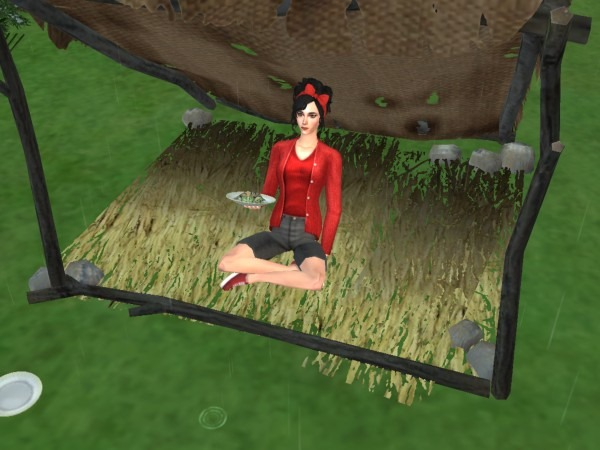 Appearantly, teens (may) forget to feedthemselves while on GO ON. You would think she with her friends would drop by a drive-through restaurant but no, she starved herself to death while on a trip.
P.S. Sorry for my bad english.
Monsieur_Oshima

that's very interesting, it means that I should be possible to make functional floor cushions/low eating tables with proper animations?

So practically everybody at LFT has been getting into the secret society lately (I wish their playable friends in the society showed up when they got there; it'd make the scenario a lot more fun) and last night Sam Thomas got abducted out of the half-bath, requiring me to get in really close to get the story shot; and I noticed that her mouth wobbled tearfully when she turned around for the handcuffing!
Ugly is in the heart of the beholder.
(My simblr isSim Media Res . Widespot,Widespot RFD: The Subhood, and Land Grant University are all available here. In case you care.)
sugoisama
Forum Resident
#9135

Quote:
Me when I'm socially anxious and don't dare to eat in front of people
sturlington
Field Researcher
#9136

Saw for the first time the want to be best friends with 5 service sims.
DrewInTheSky

Quote:
On this note, one of my SIms just rollent the want "want to meet the aliens 5 times" - never seen it before!
Simblr (TS2 Only)
Downloads
Maxis Hoods Conversions
Pleasantview Family Tree
TS1 to TS2 Database
Zarathustra

Hardly a "big" discovery but... the scrollwork at the stern of the pirate ship is very clearly a llama/sim/fish mer-chimaera...
Welcome to the Dark Side...
We lied about having cookies.
sugoisama
Forum Resident
#9139

Apparently going to uni and aging up are seperate things, because today I found out that a teen can go to uni and stillaging age up badly!

Angel Oakley was having Issues so I locked in the grow up badly want for him, but he had a go to uni want as well, so I thought the uni one would put him into platinum right away and make him grow up well even though he had low aspiration. Apparently not, he got the aspiration effect of both the want and the fear. And due to my new personality modifying rule, he now has zero (0) nice points. Uni will be fun.
Back to top