If the oft-occurring error tooltip that tells you you're not allowed to place neighborhood decorations on or near a lot has been grating at you for a while, there's a way to get around it without any cheats at all (albeit in a less-than-precise way). What it boils down to is placing the decorations first, then deleting them, then placing the lot, then using the neighborhood decoration tab's "undo" option to reverse your deleting of the decorations. It can be hard to place things exactly where you want them, but it works fine, and if you do it at the beginning, it's easy to make your lots around the decorations once they're placed (like in my visitor center lot from the ongoing vacation contest below).

(Trouble is, it's virtually impossible to place them in the same place a second time, so lots using this trick may not be ideal for uploading)
Welcome to the Dark Side...
We lied about having cookies.
joandsarah77

Oh I like that. You have probably seen what I did Zar and I thought about doing a low walking platform but decided the lot was too small with the cafe and the 'arena'. I can't wait to see how you fit it all in.
"I dream of a better tomorrow, where chickens can cross the road and not be questioned about their motives." - Unknown
~Call me Jo~
Careers and businesses for sims
What I Love About Toddlers
gazania

I am also intrigued by Zarathustra's park kiosk on that same lot. I never thought of putting a window over the maps/notices, or the creative use of that base. The clever use of overlapping columns is a signature Z technique, it seems! I'm usually so absorbed in preventing stompy Sims or (in the case of a hotel), the hotel housekeeper making my life miserable again that I never consider small, but important details like kiosks.

Also, I'd like to thank Zarathustra for probably clearing up a mystery. In a former hood, I had a lot with a tree I just could not delete. Nothing I did on the lot got rid of of it, and the original lot didn't have this tree. It appears that I might have used the lot deco trick by accident. Too bad I deleted this hood after still another inadvertent mess I made that five people here knew not to do, but if this ever crops up again, I'll know the reason!
Thanks to ALL free-site creators, admins and mods.

So much creativity! I love it.

I like to use the deco stones around my ponds and the architecture items from build mode when making bridges.
It usually ends up looking something like this: When you're trying for visual effect rather than functional practicality, sometimes the fact that you can't place things like computers on countertops becomes annoying. However, if you don't mind the fact that Sims won't actually be able to use them, objects like that can usually be placed on the glass OFB shelf, and then that can be placed on a countertop- the end result is a computer that looks like it's sitting on a countertop properly.
Welcome to the Dark Side...
We lied about having cookies.
Bulbizarre

I sometimes like to put bathtubs up on the half-step foundations and put half-walls around it. It can have a nice effect. The bathroom set's from Parsimonious

You need an extra ] for the picture to show up.
Bulbizarre

Oops. Thanks!
I'm secretly a Bulbasaur. | Formerly known as ihatemandatoryregister

Yess! thanks for sharing! those half-level bathrooms are attractive. This is one of my favorite threads so I hope more people post their nifty designs to it!
Uh oh! My social bar is low - that's why I posted today.
My SIMBLER | SIM WHIM | SIM VIDS | SIMS 2 STORIES | SIM PICTURE-TAKING TIPS | MY HOOD | SIMSTAGRAM | TWITTER | TWITCH
Bulbizarre

I made a lot for some homeless Sims. Here's what I got so far: Couple of notes:
- Along with the pond, there's a couple of Sun&Moon's fruit trees, nut spawners, berry bushes, herb spawners, and one beehive. At least they won't starve. (Don't know what to do about the fridge situation. Maybe a rusted recolour of the minifridge?)
- The barrels in the middle are a sink and toilet. I put an invisible floor divider (made by @Rosebine) around it so the Sims won't freak out about privacy.
- You can only see it if you squint, but there's a backpack leaning against the tree. It's the one Crisps&Kerosene converted into a dresser.
- I downloaded an invisible mailbox recolour but forgot to install it. I'll do that next time. I plan to ban the mailman with the visitor controller because this is supposed to be a park.
- I also plan to turn both the Blender and Visitor Controller into bushes.

- I used a lot of moveobjects and quartertile placement on the plants to create a kind of overgrown look.
- I downloaded and installed Raynuss's sleeping bag but I have no idea where it is in the catalog. I'll find it eventually.
I'm secretly a Bulbasaur. | Formerly known as ihatemandatoryregister

I believe it's "Comfort/Misc." Someone - it might by Raynuss, too - has a refrigerator that's a camping cooler. I believe it's part of an actual camping set.
Ugly is in the heart of the beholder.
(My simblr isSim Media Res . Widespot,Widespot RFD: The Subhood, and Land Grant University are all available here. In case you care.)
SIMelissa

I found the sleeping bag but it kept throwing too many iterations errors. I'll try the pallet bed.

Two hacks that I find useful for homeless sims.

Resurrecting this thread because it's awesome and I want other people to post cool design tricks too (totally not so I can steal them or anything... yeah.....)

Tired of the fact that there's only one EAxis floor lamp candelabra and it kind of has a dungeon-y, Spanish Inquisition-y vibe that you wouldn't really expect in most cases (No one expects the Spanish Inquisition!), and that the light it casts may not actually light things correctly?

You can actually make a pretty good fancy golden candelabra (or silver with some of the other recolor options, through it doesn't work as well) by using one of the fairly modern floor lamps, and then using the 45-degree angle and quartertile placement cheats to encircle that modern blown glass top with inward-facing gold wall candelabras.

Welcome to the Dark Side...
We lied about having cookies.
inspiredzone

I used OMSPs and some CC tiny sail boats to create a decorative model boat pond.

And in apartment lots, I often use bookshelves as room dividers since you can't build walls (without cheats), and it keeps the space more flexible.
inspiredzone

Double posting because I didn't want to screw up the attachments- 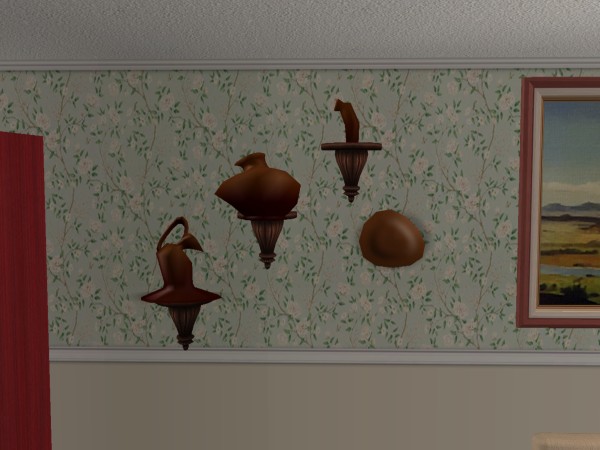 If you're not interested in dealing with lighting mods, you can almost always find something to hide a light that casts the right color light you're looking for inside of with move_objects... I've started concealing tiki torches everywhere near my candles, so that it looks appropriately orange.
Welcome to the Dark Side...
We lied about having cookies.
simmer22

I have one from my earlier simming days. Flower pot + puddle + (those squid-like deco thingies that I think came with BV) = instant ruined flower pot, at least from a distance. 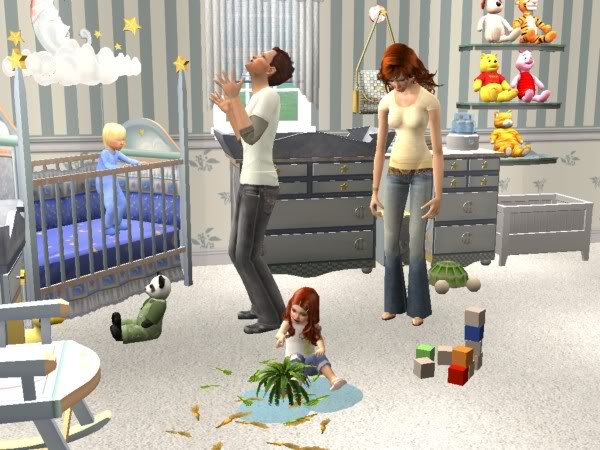 I also like getting creative with default items. You can do a lot of fun things if you put them together, which is why I don't like to hide them from the catalog. Basically being creative with what you have instead of throwing CC at all the problems.


Using the castle walls as a sand box wall, for instance (I often like using the FFS walls for photoshoots) ... 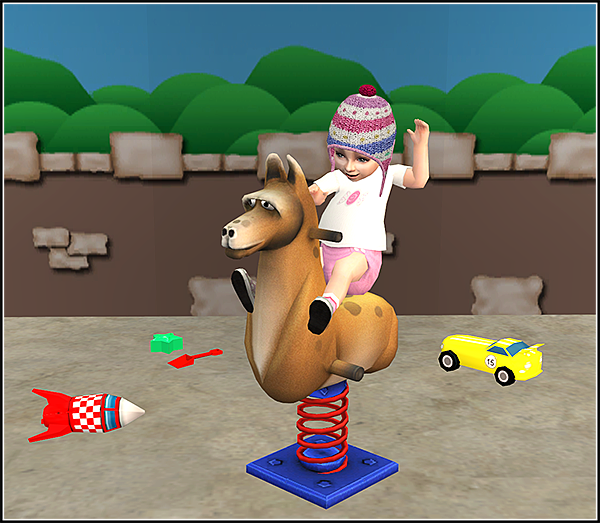 or making a tiny beach out of various deco items... 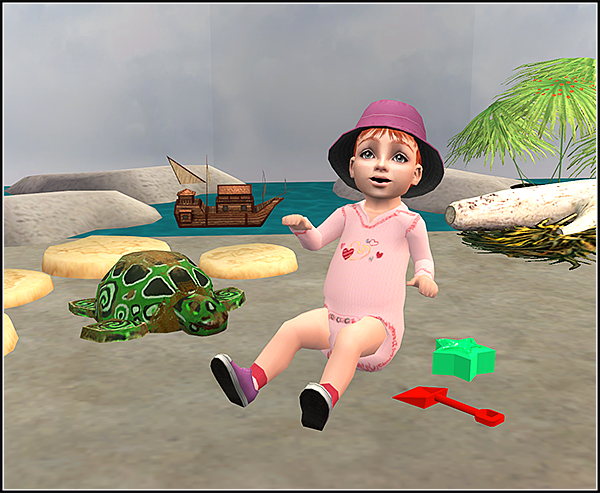 Or making instant space out of the star walls and the sun lamp... 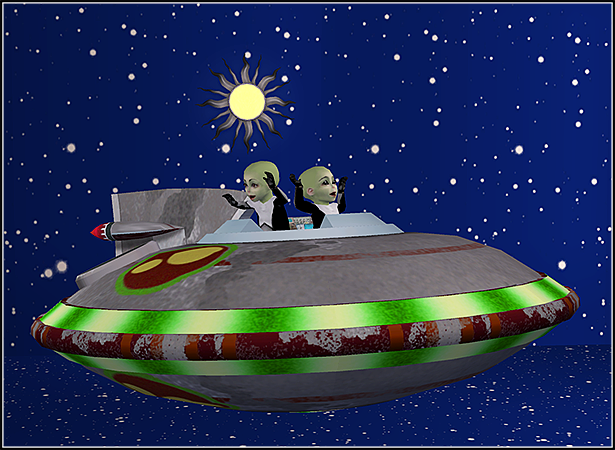 Or tiny artworks in a perfect size. 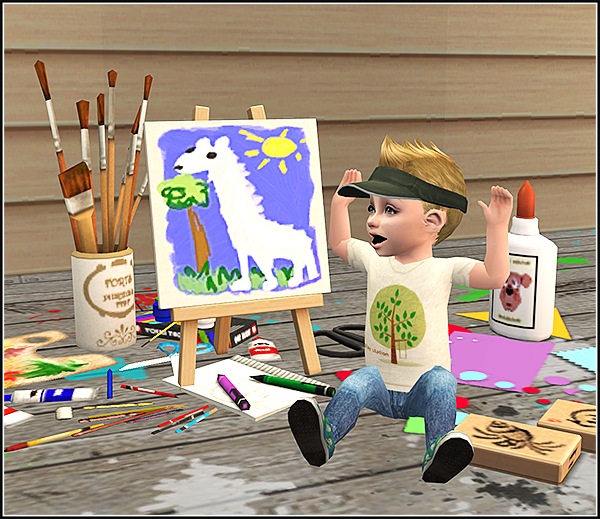 I think I did all of these in my very low CC game. There's a few CC items, but these tend to be reused a lot. There are a few extra toys, but most of it is ingame items (except for the baby attire).

This may not be new to anyone else, but I just discovered it. I've wanted a sideboard/console table surface for decoration. Tables are too wide and I don't want sims serving food on it. Coffee tables are too short, end tables are single tiles. I could get CC, but that's kind of a rabbit hole getting all the styles I would want them in.

So after years of thinking "man, I wish I had a sideboard for this space", on a total whim, I turned 2 end tables to face each other using quartertile placement, and realized it created one. Since it masks the front, I can turn a cartoonish kids end table into a chic, modern display surface. Love this thread, and so glad someone brought it back.
One trick I learned along the way was to create a new fence by placing a foundation behind one, putting another on top, then deleting the foundation.
didyouevenmakeasound

I don't know how creative or nifty this is, but I was decorating pbox's children's home when I realised that the bent stairs (using a stage at the bottom) have the perfect amount of visible bannisters for two rainbows. I thought it was neat for an orphanage, preschool, or any building that you're trying to make as cheery as possible! I used Honeywell's recolours on the base game green stairs for this, and I thought that maybe the kids at the orphanage could have painted the bannister themselves as a fun activity. 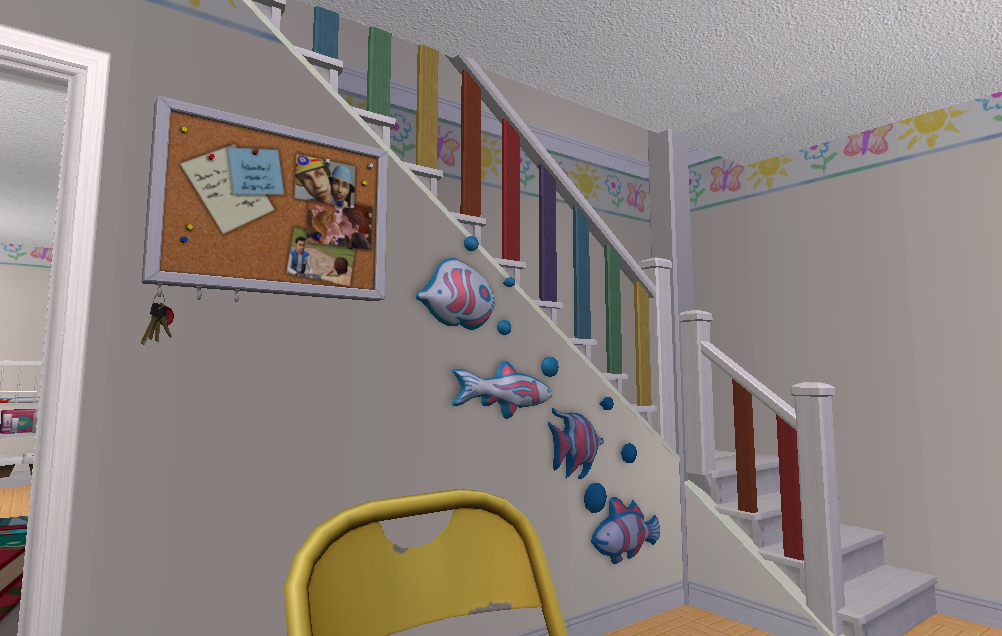 You can call me Diddy (or Eve, if you want to go by my real name) :)
My Simblr is simping-simmer. Come and join me there for a chat!
You can also find me on the MTS or PBK Discord servers under the name 'Evenfall'.
Want to know the latest news in Carregffynon? Click here!
Back to top