No glamor shots here. Luz Iana invites Billy Ghote over during her landlord's weekly party and they get away from the noise by retreating to the upstairs landing by the snack machine. The music's still plenty loud enough to dance to.

"Y'know, it's silly for you to keep paying rent on that tiny place down the street. I bet if we clubbed our money together we could get a nice little house, with room for the boys. And they're going to college soon, anyway."

A little quick mental calculation. His cash reserves have been getting a little low - rent and all those restaurant meals, taking women out, and only Luz ever offers to pay.."What a wonderful idea!"
"Of course I mean we should get married."
"Um - sure. Of course. But not right away. You know my daughter's getting married soon. We should wait till that's over and, um, do it up right."
Don't do it, Luz! He's wearing a Porn Star t-shirt, for heaven's sake! Too late...when she asked him to move in, they both had the "get married" want; only his array was "Marry Luz/Marry Another Love/cure the Wicked Witch so she's not a witch anymore/marry the Wicked Witch." He'd better hope Wicked Witches scorned don't hang around summoning lightning all the time. He's also going to have to hustle to make sure he gets his side partners laid and out the door before the boys get home in the afternoon.
Ugly is in the heart of the beholder.
(My simblr isSim Media Res . Widespot,Widespot RFD: The Subhood, and Land Grant University are all available here. In case you care.)
Advertisement
Croutonian

Peni Griffin - Cute couple.Even if Luz Iana's eyebrows look a little strange in the first photo.But seeing a sim couple always makes me smile ^^
Croutonian - Oh, they're so sweet cuddling on the couch ^^


Lilith Pleasant and Oliver Broke met a week ago and now they're already getting married ^^ Their parents couldn't be happier.Now, they're one heck of a tribe ^^ They're related to almost every family from Pleasantview.

Even tho I have read some of the books and seen 2 movies I am still midly convince they were secret lovers. So this is what they did when we were not reading Yes, I know Voldemort is missing his robe

We're still waiting on it.


Snape and Voldemort have a very dysfunctional co-dependent relationship.

This message has been deleted by Nisse.
Lady Voldemort

From my latest legacy, the McCrooks.

Some more of...
Baise and Joe McCrook

Although perhaps not one of my most "attractive" legacy couples, I love them just the same.

@OhSnapItsChris> I got them at Pooklet's dreamwidth.(:
Please, call me Nym.
LJ | Tumblr | DW
ForeverCamp

Cory and Navarrah Lam, demonstrating why exactly they have 9 children before they're even out of university... (Navarrah managed to snag Cory, who is notorious for leaving girls when they're pregnant - he has four other children by Esther and Judith Broke, who frequently come home from school with this lot).

Jaden and Marie Burb, out on a date in Chestnut Park, in Sim State University.
Liv
Field Researcher

And in the day of 30th wedding anni:

Chris and Natalia
Fell in love as young adults:
http://i1068.photobucket.com/albums...380df7cbae8.jpg

But after break up, finally were married to each other 10 years later

Coral Oldie and her husband, Herb. Oliver and Billie Onions got a random tourist to take this picture of them slow-dancing in front of a food booth while honeymooning on Twikkii Island. They spent a lot of time at food booths because the bungalow they rented had no kitchenette. What kind of sense does that make?!

Oliver is wearing his swim trunks. He's one of those sims who's always nekkid in the hot tub, but when he gets into hot springs he puts on his trunks. He then never put his shorts and t-shirt back on again. Even when he got out of the sauna, he put his trunks back on. Billie and I didn't mind; but Billie wouldn't follow suit. She was in and out of street clothes all day long.
Ugly is in the heart of the beholder.
(My simblr isSim Media Res . Widespot,Widespot RFD: The Subhood, and Land Grant University are all available here. In case you care.)
megank48906
Test Subject

These are all from my legacy family which is the only one i'm playing at the moment. Gen 2 heiress Celesta and her husband Randy. They were so cute together Marcus and his wife Victoria who my sister made for him. Ilya and his wife Marsha. She made him the cake to soften him up so she could tell him that she wanted a baby. He agreed Eloise and her husband Ricky. This is just after he became a werewolf. She changed her look and painted a moon and stars on her face to show that she supported him no matter what <3
Lady Scarlet


Jennifer and John Burb divorced right after their daughter's wedding.Their last moment as a couple.

Well, after the divorce, Jennifer discovered she was pregnant and she gave birth to Noah Burb, a really sweet baby boy.Even if they are not a couple anymore, she and John try to act like a family for their son.

Finally, Dina Calliente remarried, this time with Angela Pleasant-Broke's son, David Pleasant (well, they're about the same age now, but I think that genie has something to do with Dina's youth >.> ).Now, she and her niece, Adora Lothario-Goth (who is currently Alexander Goth's wife) are both expecting ^^

http://i1196.photobucket.com/albums.../Wedding3-4.jpg
✙ "The world is dark, and light is precious. Come closer, dear reader. You must trust me. I am telling you a story." ✙
♕ Portraits Of An Age ♔

This message has been deleted by animenut31. Reason: wrong place for message
animenut31
Field Researcher
DELETED POST
3rd Sep 2011 at 2:33 AM

This message has been deleted by animenut31. Reason: posted a sims 3 message in a sims 2 topic
Nymphy01

Brandi Broke-Dreamer and Darren Dreamer are still a couple after so many years.

Kendra (Jr.) Galena and the local evil Warlock, Andres Guerrero. Or was it "Adrian" Guerrero? Gah, how can I be so bad with names?? I've never paid much attention to the backrub animation before. I didn't know the receiving sim made such a "ohh, that feels SO good!" face.
I_Love_Simming

Sherry & Oliver have been together since they were teens, and now have finished college and moved in together 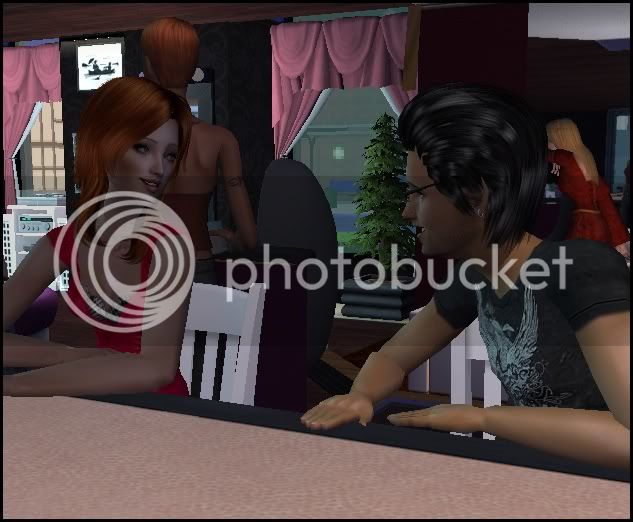 Check out my Sims for Download Here :)
Take a Look at my Re-Model's of Houses! Here
Even the best fall down sometimes...
Even the stars refuse to shine...
I somehow find, You and I..Collide...
Peni Griffin

Ernest and Sage Ann come home at the same time. He parks his truck in the driveway, her carpool drops her off at the mailbox. Generally the boys run out to hug them, but they were taking after-school naps and I was doing something with Nannie, so I didn't get down to the curb to direct them right away. I selected Ernest and started scrolling towards them, seeing that he had interactions with the dog and Sage Ann lined up. The dog dropped out and when I reach the mailbox, this is what I find: Over at Garrett Newson's, he's invited Ginger and her family over for dinner and to see the new baby. Lourdes was in the bathroom, so he started dinner; then when she came out of the bathroom he turned around to ogle her.

Ginger: Um, Garrett? Don't you think you should keep your mind on your cooking?
Garrett: What, sis? Oh, crap...

Lourdes: Oh, carino, it's not that bad. See, I'm eating it. He didn't burn a thing the whole time I was pregnant, but don't ever let him make you pancakes. Every time he tried to make them at college he caught the kitchen on fire.
GInger: Oh, that reminds me, I brought the photo album. We never had time to breathe, much less take pictures, when we were growing up, but before Mom and Dad died they got a lot of pictures of the twins, and I just found it. I hadn't realized they took so many pictures of Garrett in diapers!
Garrett: I'm - not hungry. It think I'll go outside and fish. In the rain.
Ugly is in the heart of the beholder.
(My simblr isSim Media Res . Widespot,Widespot RFD: The Subhood, and Land Grant University are all available here. In case you care.)
Back to top