modding - Fence-arch: infos-sharing, ideas-mingling, etc...
Fence-arch is so much alike fences in terms of graphical contents like cres, shpe, gmnd, gmdc, txmt, txtr, lifo.
But, it has no fence xml file.
It's graphical references are mostly linked through its script fencearches.txt @ "...\EA GAMES\The Sims 2\TSData\Res\Catalog\Scripts".

"26" appears the numeric instance of the fencearch.

All the model statements are to link to the corresponding cres files.
So, the only fencearch consists of 4 components, 1 for the post, 1 for the central rail, 2 for the rail sides - "east" & "west".
The side models appear to be located at the same spot as the post model.

"mayPlaceDiagonally true" can enable fence-arch to place diagonally. Yet, the meshes of the only fence-arch wasn't designed for this purpose.


About the pix:
I've used in-game fence posts and diagonal rails to make the "new" fence-arch in a TS2 only system.


About the attachments:
These 2 are the 2 modified scripts I did before I took these screenshots.
The fenceDeckAgedWoodArchTrellis is the default fencearch resources which
I also use it for custom-cloning.

What to solve:
I've yet to prove if certain location(s) or no location will work for custom cres files.

What I expect:
If custom cres will work out, more better crafted custom fence-archs may come out.


Why the fence-arches?
They can overlap with partitions like fences but cannot be placed unless a grid away from any wall-based partition. Diagonal versions may help solve the challenges caused by the particular partition system for fence-arch.

Is it possible to add bhavs & pie menu to a fence?
http://www.modthesims2.com/showthre...highlight=fence

I think (and this is what I meant on my last post on the Scriptorium) that Maxis changed the way the fence-arch work; in the original idea, a fance arch should have been built dynamically:
- you click, and a post is created
- then drag, and a TrellisEast is created
- then go on dragging, and multiple TrellisCenter are appended
- then release the mouse button and a WestTrellis (with post) is created.

But now, I couldn't see any TrellisCenter in my tests, or anyway no fence-arches built that way: every tile is identical to the surronding ones.
I've finally started my Journal. Information only, no questions.

I'm lost... What's the exact problem(s) you're trying to describe?
I just know too little to understand...

Updated:
In the attached instance, as I estimated from what I've learnt from both walls and fences, custom fence-arches appear possible...
This is true in TS2 and up to OFB at least.

In the pix, the one with wedding-arch and a shiny ending fence-arch side is the custom fence-arch!

To test this example out, one has to dump the custom package in the downloads folder and replace the fencearches.txt @ the script folder. All fence-arches are at the end of the fence listing.

It seems the script text can't recognise the FR or any other location probably because their default location for build tools and/or other in-game graphical elements is 0x1C0532FA.
As hinted by TS2-compatible fences, fence-arches get recognised in the same manner. So quite likely, at least custom cres files have to have group strings as 0x1C0532FA. I've not tried to test if shpe files have to follow cres files in this manner, but I don't see that as important any more.

after all, the gmnd, gmdc, txmt, txtr and lifo can be in FR

Lol! I guess I wasn't clear earlier, and anyway I was wrong: the fence-arches are modular, and work exactly as they are supposed to.

I'll explain better (not for you, Niol, but for anyone else might want to read this notes).

Fence-Arches are built on the terrain like the fences (i.e. by dragging the build too across the terrain); but there is one big difference that makes fence-arches unique: no matter how long you drag across the terrain, the resulting fence-arch will be composed as shown in the following screenshot (I used a purposely modified mesh, it's not the original Maxis one!) 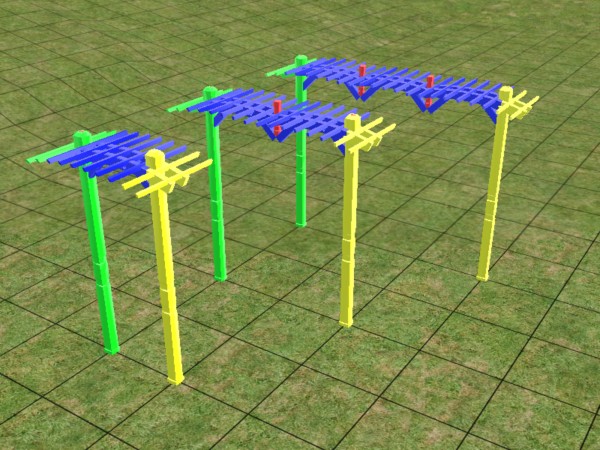 - At one end, there is the East piece (in green);
- Then, one or more Center pieces (in blue);
- Lastly, at the other end, there is a West piece (in yellow);
- Between any two pieces, a Post (in red) is drawn; though not visible, the post is drawn even between the center and the East/West terminations (you can't see it in the screenshots because it's embedded into the yellow and green parts)

All the pieces are visible in the catalog thumbnail (see screenshot below; again, the red post is not visible because hidden into the terminations).

When two sections of fence-arches touch one another, they merge into one single arch:

1) Fence-Arches can have a custom price, catalog name and description.

In order to do that, you have to create, inside the package, a Text List with instance 0x00FF; in line 0 you put the price, in line 1 the name, in line 2 the description. Then, in the TXT file you have to add - immediately below the line "fenceArch XX" - another line like this:
catalogTextResource ExactPackageName 255
Note that the number 255 must not be modified: it refers to the instance 0xFF of the text list; as for the ExactPackageName, it's the package that contains the fence and the TextList 0xFF (omit the .package extension).

2) The Scriptorium CAN be used with the fence-arches; but at the moment it's not complete. You have to edit (only once) the file "fencearches.txt", appending to it the line: wildInclude "Scriptorium_Walls-Fences-Arches\*.*" (included the quotation marks as shown). Once done that, you can put the text files containing the data for your custom FenceArch into the folder "Scriptorium_Walls-Fences-Arches" (you can access it using the shortcut placed in your Downloads folder).
This makes much easier to add and remove custom fence-arches.


I'm attaching the rar containing my test fence-arch (the coloured one, depicted in the screenshots) and the TXT files ready to be put in the Scriptorium folder.
I've finally started my Journal. Information only, no questions.

Now, I finally see what you mean...

The post and the side locations are overlapping as it was planned, and that's what I meant "The side models appear to be located at the same spot as the post model."
Normally, if the meshes of the East and west are the same as or larger than that of the post, they're likely to cover the post (as shown in some of above pix I posted, especially the ones about the WhiteRoyalCourtyardFencing posts).
The posts get covered at the terminals. The east and west parts only exist at the terminals. So, a directional fence-arch is possible.
After all, some cool designs can be done out of this overlapping property.

Thus, we're basically talking the very similar thing in this aspect.
So, meshers can just build them up to the parts @ positions similar to the default ones for the parts to connect while saving resources.

The fencearch text references I can find is @
...\EA GAMES\The Sims 2\TSData\Res\Text\build.package
Thanks for your tip to show how to add a new text list for new fence-arches... Gonna try...

Mind if I use your custom fence-arch for my personal twists...? :D

If the post is thinner and shorter than the east and west posts, more variations am I seeing

Sure, do whatever you want with my test fence (that btw has the post shorter and thinner then the east/west, like you describe).

I'd like to know if there is a way to make the fence-arches "climb up" the hills, like the black iron fence; currently, it cuts the ground, making it flat, like a wall.
I've finally started my Journal. Information only, no questions.

Guess what? As you might have imagined what it's like if (Maxis had set the only fence-arch to do so... while probably being too lazy to make the static centre part to be twistable like rails...

Yeah, that's true this is yet another limitation for the fence-arches...

OK, anyone is up for a tech challenge to alter that?

Sorry, I forgot about the another statement completely after getting too excited about the custom fence-arches..!
Thanks with virtual dish of your likes..., Numenor. :friendly hugs:

Still I forgot to state out the cheat boolprop constrainfloorelevation false can get this fence arch "deformed"...

This message has been deleted by sims2lurker.
Back to top