Thank you so much for figuring this out Wes...although I must point out that having a man respond to the sight of my package by calling me a horse isn't exactly what I would call nice. First that horrible eye-burning page about the Fresnel and now this?...I'm beginning to feel you don't like me.

But still...I appreciate you taking the time to work on this.

I really wasn't ignoring the warning per se...I just didn't know how to fix things so I wouldn't get it and since it wasn't affecting my objects in any apparent way I put it for the "things I'll worry about tomorrow" category.

"You get so used to ignoring the warning that it is ineffective"..now that I've been chastened I'll learn...sigh.

I'm with you on the bone assignment thing HT...I got the message so many times when it seemed to have no effect in the game that I got used to ignoring it. Who knew it would affect glass textures of all things?

I couldn't find anything anywhere that explained how to assign bones and since it didn't seem to matter I just set it to the back of my list of things to learn.

When you say, "In the Joints tab, click SelUnassigned, then Assign. It was that simple. No more annoying message..." is there anything else to it? Do we have to select any specific Group or parts of a Group? Does anything on the screen need to be highlighted in red before we perform that step?

"SelUnassigned" means select unassigned vertices. If you click that button, those vertices get highlighted. The bone is automatically selected, because there is only one in the list (it's that numbers-letters name in the box above the buttons). You're assigning the selected vertices to that bone.
orangemittens
Alchemist

Thank you for the information LC...this is helpful.

this is all that comes up when I click MLOD/MODL info...

does that mean it can't be done?
Everything sucks, until it doesn't.
WesHowe

That's great, Wes! You found the problem.
In my first vase I assigned everything. But when I made my test object, i ignored the bone assignments message!
orangemittens
Alchemist

I'm still wondering about Jillian Wong's attempt to create a glass texture for the chess game though. She said, "So I am wondering what could have gone different with the chess table and why I am getting a huge shadow but no object. This is definitely weird. I didn't even open the chess table in MS..."

It doesn't make sense but it seems the bone assignments were messed up in her object although she didn't make any attempt to change the EA mesh at all.

In any case, I'm going back to the table and a few other objects I made and fixing them so that the bones are assigned. I now understand why some items looked funny in the game if they crossed the path of another object while I was placing them. I've seen several objects I've downloaded from other people that have this issue also, so my guess is that there are a lot of people who aren't assigning bones.

I'm going to add a part to the beginning of the glass tutorial to make sure that people are aware that bone assignment must be performed or else the glass texturing won't show up on their object in the game. I hope Ella shows up at some point because the PDF she has posted at MTS will need to be slightly revised to reflect this addition. There's no point in Wes discovering the solution only to have people posting about the same problem over and over.

I am not sure that JW's problem was the same as the rest of you had. Unintentional things happen all of the time in game modding... sometimes things are discovered that way, mostly what happens is frustration.

I can think of way mistakes could be made while doing this. But I am not going to tell what they are, people will have to figure out their own mistakes.

If you like to say what you think, be sure you know which to do first.
orangemittens
Alchemist

"But I am not going to tell what they are, people will have to figure out their own mistakes."

This is one area where I can definitely say I won't need your help Wes...I'm extremely good at thinking up meshing mistakes all on my own...one could almost say I elevate that to an art-form...lol.

So, here I am, again.
I started to work on a curtain this morning (which is funny, since I was told I should make one, later in the day, lol. Already thought of that.).
Extracted a mesh I liked, prepared it,
cloned the Curtain-loft file to put it on
exported the one MLOD (there's only one) and the MODL
pasted the mesh (there's only one group)
assigned bones
imported
imported the texture I mapped the curtain to.
saved
Tested in game, worked perfectly fine.
went back to change the material files (in this curtain it was n° 7 and 8 for both), imported
Plopped back in game to test.

... invisible curtains. No shadow (there's none in the MLOD). No translucence whatsoever.

I did that same thing 4 times. Same result.
It has to be something in the material file.
I'll investigate further later, because right now, i need to eat something before I eat someone.

But if anybody has suggestions, please be my guest (I urge you to be my guest

I think it is something with the mesh you are using or the MS steps you're taking.

I made the Loft Curtain sheer without doing anything else to the mesh and it worked without a problem. 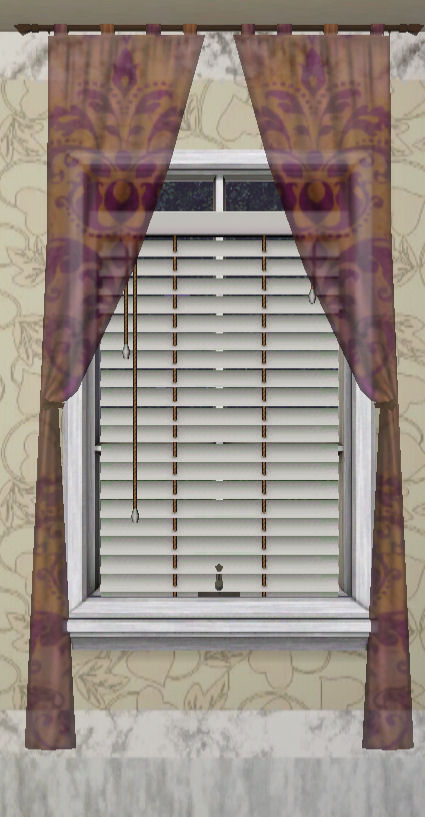 Try doing it the other way around. Try making the curtain sheer and then using that to copy your new mesh over.

Yes, I did that too... I got a transparent loft-curtain.
I don't know, the mesh is normal... It is uv mapped... the joints are assigned... That's all i can think of...
orangemittens
Alchemist

Get rid of its joints by making it an obj.

Then import it into MS with the clone to use the clone's joints.

As we have both found out through painful experience the joints matter when it comes to transparency.

I was going to make some sheer curtains also...these make me want to even more...they're super-cute.

You were right, I had too many joints in the original mesh (result of my tinkering with many meshes that I subsequently deleted. but the joints stayed !).
Your method worked ! !
Here is the curtain. The pict is a bit dark. i think I need to edit the textures somehow, and the transparency. A bit more transparent would be good I suppose. Or maybe it's the texture that isn't light enough...

I think that joints lingering thing is why Wes built that warning into the MS importer thingy. It helps one remember that stuff is lingering there that could cause problems. He does everything he can to protect us blondes from ourselves...lol!

If you want it a bit more transparent try altering the last number in the Diffuse line. The recolorable glass uses .8 which is pretty high. Try adjusting that to a number that begins with .6 or so and see if you like it.

I don't think it's the texture...they were a little heavy on the non-transparency with that coding in my game too.

Ooh! That curtain looks awesome! I love how it chops up the road to small pieces :D
You can always test the texture darkness by CASTing it full white in game and see if you like the whiteness or not. (But I guess you tested that already :D)

Oh one question. Are these glassified curtains, or did you only edit the transparency?
orangemittens
Alchemist

LC...it is possible to edit the transparency without making glass?

Is this through the same MTST blocks that we change texture with?

Lemon, I glassified it with the same shader as the deco objects (the one that is recolorable, from the store screen). I just made another version a little bit lighter (lighted the texture lighter grey-), and with a better transparency.
I also remapped it, but the texture still does not really satisfy me;OM is looking at is, she is really experienced with mapping ^^.
orangemittens
Alchemist

Not so much really HT...perhaps just more picky about it than others...I think the way a texture lies on the object is just as important as the object itself. It hurts my eyes if the texture is distorted and it doesn't give a good effect in the game.

I never was able to make many things in Sims 2 because the maps took so long to make perfect...or at least as close as I could get to that. I think my meshing skills suffered because I spent too much time on the mapping and texturing. But texture is important even though it is less so in Sims 3 (a relief).

In any case, I think your curtain is beautiful.

Om, you know that I didn't make it from scratch anyway. I'm just good at extracting and putting things together ^^.
And I hope you'll agree that this looks much better, now. I did what you told me (I had to try twice, the first time I still had horizontal distortion) :

On second though, i should maybe remap the bottom...

Well off to bed. I have to sleep sometime ^^.
orangemittens
Alchemist

Then the curtain would look like folds of fabric all the way to the bottom without that flat little edge all along the bottom. You would have to do it that way rather than bringing the bottom of the map itself up or you will distort the map.

The mapping itself is beautiful...the square pattern is square and the round pattern is round...exactly how it should be. That bottom issue is an IMG issue IMO, not a mapping issue.

Ah I just assumed you can make simple transparency but I never tried, sorry for confusing... It's just that the curtains look sooo right, not glassy at all, just marvelous :D
hazuitokage

Yes, I thought I would have to correct some kind of glassy shine, since it's the same shader as the objects, but it turned out fine...

I remade the bottom (many times) it's less flowy, but it's the best I seem to be able to come up with for the moment. I wanted to edit the mesh further, but I don't know yet how to add vertices and more complicated mesh editing in Milkshape. I was always peeved at sims2 curtains for not having bottoms I liked, but unless it's a straight line (which in fact it is, here), it's seems to be difficult (at least for my skills). So I alpha edited the texture and remapped it a bit and that what i came up with. I'm not entirely satisfied with it, but does it still look ok like that ? (I liked the version in my precedent post too, but it was difficult to actually get rid of the bottom without borking it, so...)

I think a simple alpha edit will be sufficient to get different heights.
orangemittens
Alchemist

I'm not sure what it is you don't like about the curtain...it looks fabulous to me.

Hey, it's possible to make a glass table? I Have one here i made and i want it to be glass. But i only get a solid color =(
And if i paste that code in the mtlsrc the recompiler crashes.
Back to top