TextureTool (sort of object workshop for textures)
Hi - anyone feel like helping me test my new tool? A visual interface to help you edit your object's main images (mask, multiplier etc) and pattern options.

"You can do refraction by raymarching through the depth buffer" (c. Reddeyfish 2017)
Advertisement
Inge Jones

I have just uploaded a third update. Fixed some more reported bugs

"You can do refraction by raymarching through the depth buffer" (c. Reddeyfish 2017)
Inge Jones

Now it has a button to click that turns 3-channel or non-CASTable objects into 4-channel castable ones.
"You can do refraction by raymarching through the depth buffer" (c. Reddeyfish 2017)
BloomsBase

Inge, does it also add the superblocks?
I have done 2 or 3 objects changed to 4 color objects without updating the superblocks and they all are very pixelized ingame.
However, when i change color on the pixelized object(ingame) the rough pixels are gone.
No idea if this had to do with changing 3 into 4 castable objects or that it might be a bad tsrw version, got to check.

Have to redo them anyway so will use a newer version.
I am sure OM will check

Yes you get additional superblocks after the tool has performed the task.
"You can do refraction by raymarching through the depth buffer" (c. Reddeyfish 2017)
Esmeralda

Quote:
Oh wow, this is fantastic, I'm currently working on an object that really needs to have 4 channels but have not been able to do so. Thank you SO much for adding that! (Rushes off furiously to download new version.)
leefish

I have to say - I have been using this Texture Tweaker a LOT. It is an excellent tool and I recommend it to all creators who want to use the repository technique on their objects.

Quote:
Seconding that. I'm using it with all my object projects now because I find it invaluable for being able to quickly and easily change the default CaST preset patterns, which were a long-winded tedious pain in the rear to deal with before. And now with added 4-channel goodness - perfection! HUGE thanks and kudos to Inge! Very appreciated!
BloomsBase

I also use this application for every project. Being able to add a fourth channel just made it that much better.

Huge thanks! I've been eagerly waiting for this

Quote:
Non-CAStable to CAStable *and* the fourth channel!

Thank you for all your work on this great tool Inge

Very useful program! I always postponed making presets for some old objects but now I finally did it because your program makes it so easy. Thank you so much!
Inge Jones

Allows you to open packages with more than one object, for example modular counters.

You can choose another package to link to, with your favorite images or a repository in, and those images will be available to link to from the Image Changer form

Has a built-in semi-editor where you can import a color png/jpeg/whatever and add another png/jpg/whatever as the alpha channel, without having to rely on DDS plugins for other image editors. Also simple lighten/darken increase/decrease transparency. Edit screen also has analysis tools to find out where one mask channel overlaps another etc.
"You can do refraction by raymarching through the depth buffer" (c. Reddeyfish 2017)
obino

I am loving this tool
Inge Jones

"You can do refraction by raymarching through the depth buffer" (c. Reddeyfish 2017)
Inge Jones

added EPs to file list (optional setting)
added user browse to external package to find image
Made the image field matching for lods more general so I don't have to know every field (eg "NormalMap") in advance
Added tab where you can access all images in package even ones that are not linked by a known reference.
TT3 now opens any package, not just ones with understood catalog resource types in. For packages without a known catalog resource, only the Packed Images tab is available
Slight changes to UI
Can fix mirror planes for a mirror via lodimages tab (temporary feature till we have a more specialist meshing app)
"You can do refraction by raymarching through the depth buffer" (c. Reddeyfish 2017)
bluetexasbonnie

Thank you for this tool. I have used it to successfully make a new 2-channel wall. It was so easy and I understood which textures went where. That was my 2nd ever completed Sims3 creative project. Admittedly, Project #3 -- a four channel wall is giving me lots of frustrating failures - but I don't think it is an issue with the tool. I think that is because I really don't understand the alpha texture in this context. Well, back to reading. Hopefully I'll find channel discussion that will make sense of this.
Retired from the Sims world. Please continue to enjoy my creations. Thank you to everyone who helped -- by either giving me the tools and knowledge to create or by encouraging me & downloading my creations. The Sims community is the BEST!
Inge Jones

There is a new version out, which fixes many of the problems with upgrading to 4 channels, objects which are meant for use off-lot like town deco. http://dino.drealm.info/den/denforu...x.php?topic=625
"You can do refraction by raymarching through the depth buffer" (c. Reddeyfish 2017)
Menaceman44

I have a problem with this tool ! D:
It's too big to fit on my screen. By this I mean that when in it's default size or when maximised, the bottom of the screen is cut off preventing me from altering the tiling of the fourth channel pattern because the buttons and boxes aren't visible.
Is there a way around this?
My deviantART, MTS Yearbook Origin ID = Alistu
Inge Jones

Oh I'll see if I can fix it. What is your screen resolution?
"You can do refraction by raymarching through the depth buffer" (c. Reddeyfish 2017)
Menaceman44

According to what my computer is telling me, it is 1366 x 768.
My deviantART, MTS Yearbook Origin ID = Alistu
Esmeralda

Inge, I've actually always had the same problem with TT as Menaceman too, although I've been able to get by so far without being able to see the bottom of the window, but it would be nice to be able to see all of it! My resolution is 1280x800.
Inge Jones

Oh I better post here too - I updated it! Let me know if it has solved your problem
"You can do refraction by raymarching through the depth buffer" (c. Reddeyfish 2017)
Esmeralda

Ooooh, thanks so much - I think that has solved it - but please note that your link to the new version, 3.044, actually links to the previous version, 3.043 - I tried copying link location and changing 043 to 044 and found that I was able to download 3.044 by doing that! So you of course might want to re-type that link!

For those who use this tool and have been having the same problem, the bottom of the screen is still cut off in the new version unless you move the Windows taskbar to the side rather than its default position at the bottom. At the bottom, the taskbar blocks the last line of TT's screen: 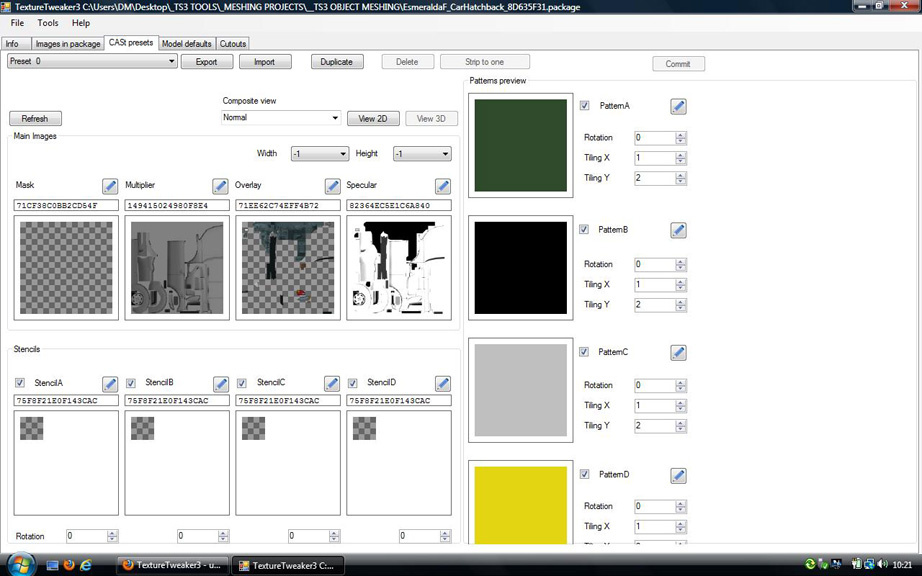 But if you move the taskbar to the side, you can see the whole screen (at least, I think/hope that's all of it): 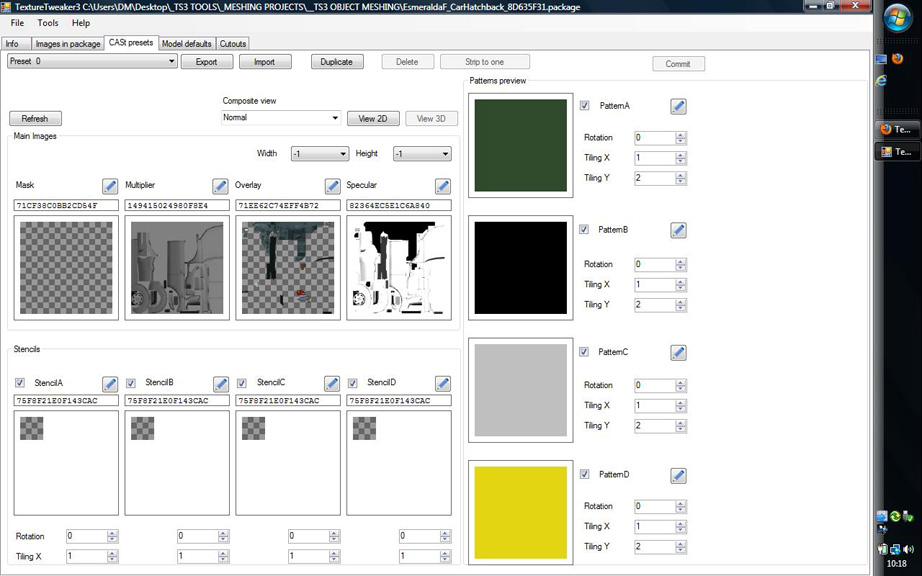 Doing this with the previous version did not accomplish this effect, so hopefully we are now seeing all of it!

Thank you so much again for this tool - I use it for every object I make now, just to give everything 4 channels and change the CaST presets, haven't even tried out all the other new features yet, but find it a lifesaver just for the ability to do those two things! (Just one thing I miss, though, is that it used to say 'Have a nice day' when closing down, and it doesn't anymore! Awww.)
Back to top