Hi there! You are currently browsing as a guest. Why not create an account? Then you get less ads, can thank creators, post feedback, keep a list of your favourites, and more!
Quick Reply Print version
Search this Thread
Replies: 2 (Who?), Viewed: 13515 times.
ScaryRob

NOTE: This method for installing lockable driveway gates works in my game, which is The Sims 2 Double Deluxe, with all EPs and SPs. It has been pointed out by a player downtopic that lack of certain EPs could result in this method not working. As I am totally unfamiliar with the ins-and-outs of the various EPs and SPs, I cannot give any useful advice in this regard - sorry. (This doesn't mean players shouldn't post about problems, because someone else might know a solution.)

One thing I never liked was how driveways leave a Lot open to nosy neighbors who help themselves to all manner of things, as well as stray pets who enter Lots, dig holes everywhere and become a general nuisance.

I did a little experimenting to see if there was any way to deal with this. In particular, I wondered whether there was a way to put some kind of fencing or gates across a driveway, without the driveway becoming non-functional.

I found that putting a fence across a driveway is not only possible, but that it is possible to install lockable gates, that the end result looks very good and that the driveway stays completely functional, including the animations of cars leaving and returning to the Lot. The fence gates don't actually open, of course, the cars just drive right through them.
And it's all very easy to do.

So, without further ado, here's how you put lockable gates across a driveway:

1) We start with a typical driveway. This could be either a location you've picked at the start of construction of a house, or of an existing house. The fence I'm using for this tutorial is the Maxis Ancient Guardian Rock Wall, which will be a reasonable good aesthetic match for the gates that will be installed later. For aesthetic reasons, it is desirable to have a fence and fence gate that reasonably complement one another.
Note that the fence gates will be recessed one square back from the sidewalk, also purely for aesthetic reasons - I think it looks better than having a gate run right next to the sidewalk - but this is purely optional. Also notice the normal "pedestrian" gate towards the right, which is the gate you'd want your Sims to use to enter and exit the Lot, instead of wandering in through the driveway: 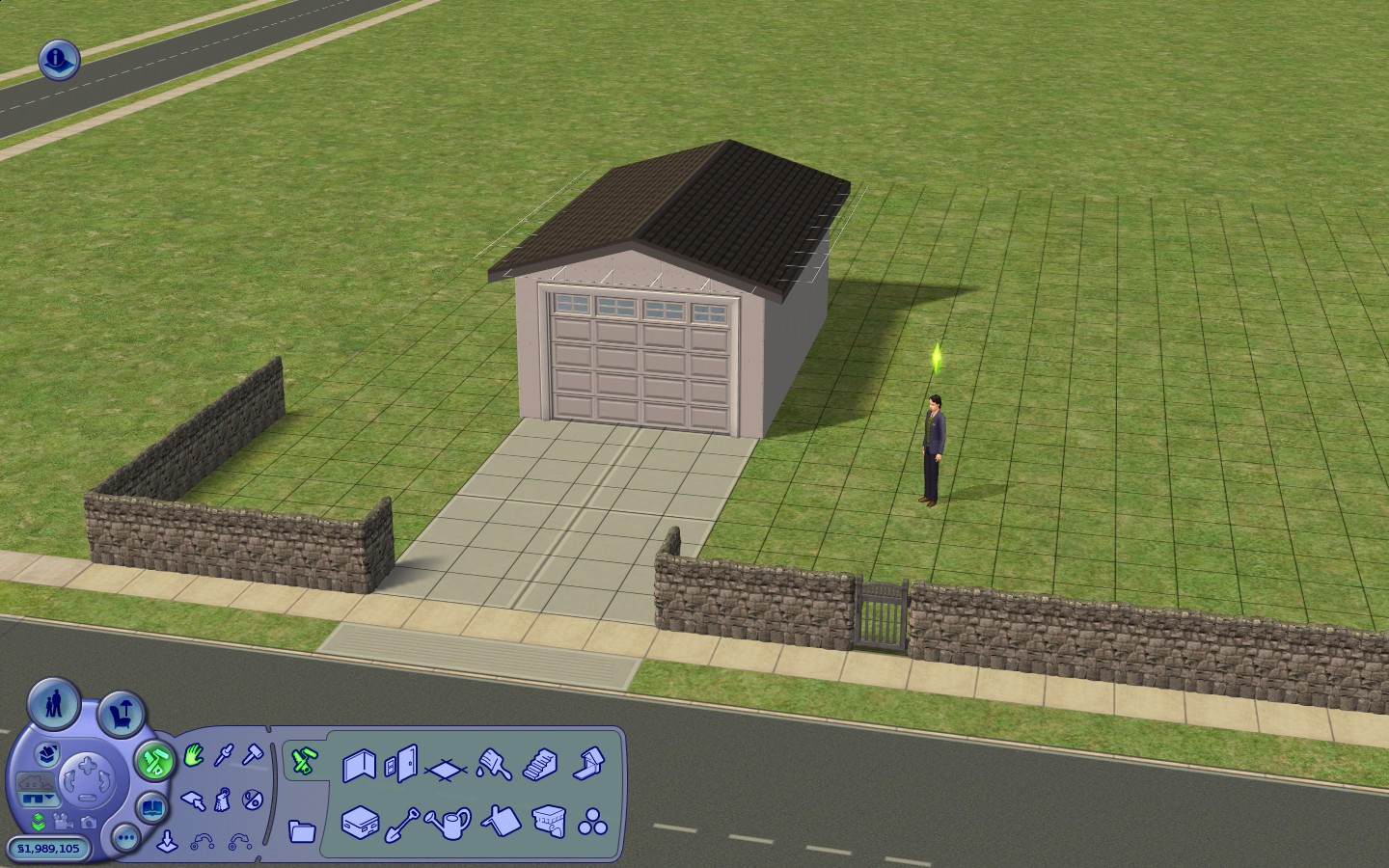 2) Remove the driveway and extend one of the Maxis Sleek and Secure fences across the 5-tile open area. The reason for using this particular fence is because it is the least visually obtrusive, the importance of which will be seen shortly: 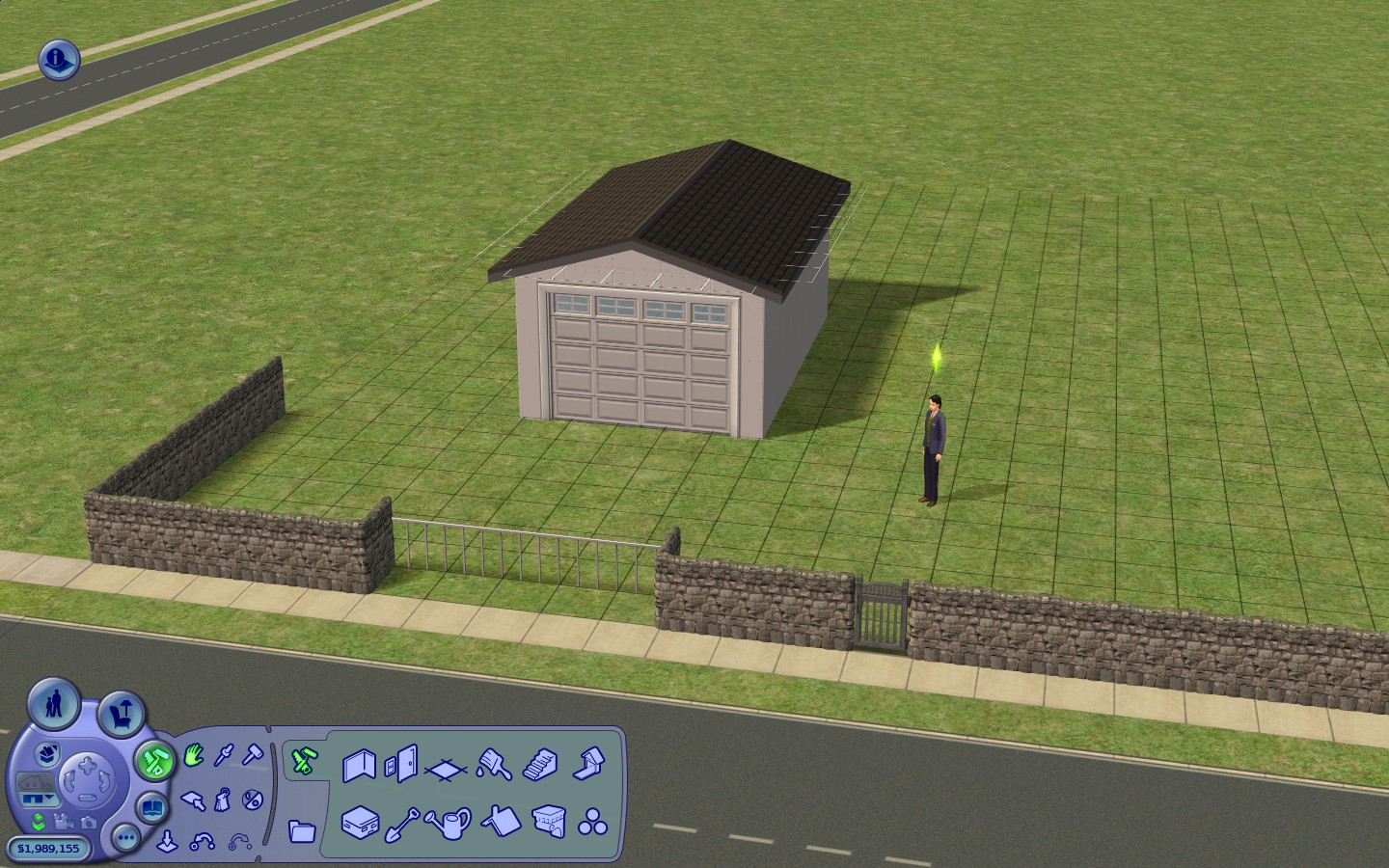 3) Add an appropriate fence gate across the driveway area. The gate should be a 2-tile gate, for reasons that will also become obvious shortly, and be a good aesthetic match to the Ancient Guardian Rock Wall fence. In this case, I'm using the Longbranch Front Gate, grey color. This is possibly the best type of Maxis gate to use for making lockable driveway gates, because it is a 2-tile gate and comes in 5 colors. Add the gates as shown: 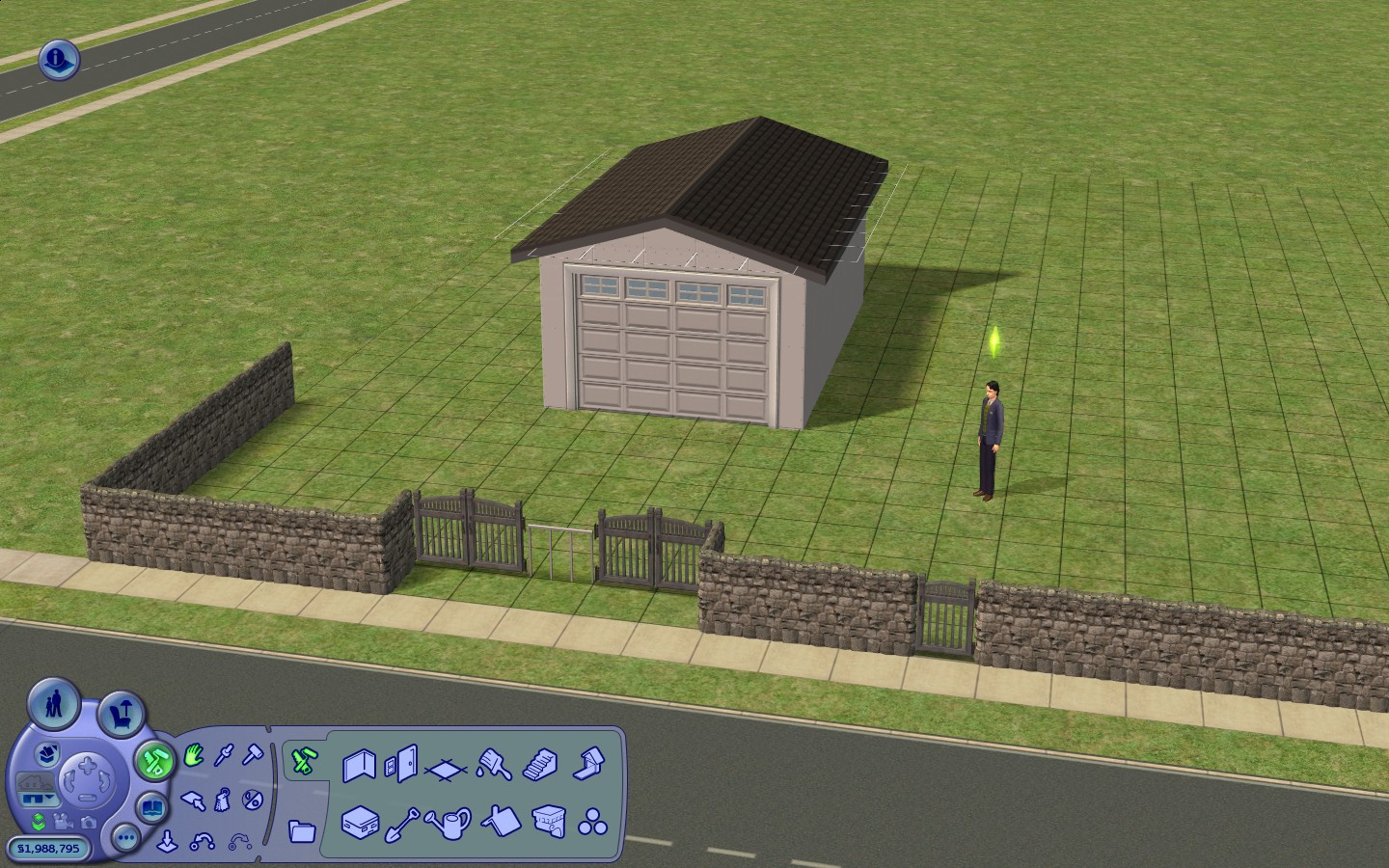 4) After adding the two gate sections as shown in the previous step, there will be a 1-tile gap in the middle. This gap is closed by turning on the moveobjects building cheat and installing two more gate sections across the gap. This is the reason for using 2-tile gates, because a 1-tile gate would not adequately bridge that gap. The result looks like this: Note at this point that the Sleek and Secure fence is slightly visible in the center section, due to the last two gates having been installed with the moveobjects cheat, which does not overwrite the fence graphic, but it is hardly noticeable. It is for this reason that the Sleek and Secure fence, being the least visually obtrusive, is probably the best choice of Maxis fence to put across the driveway area: 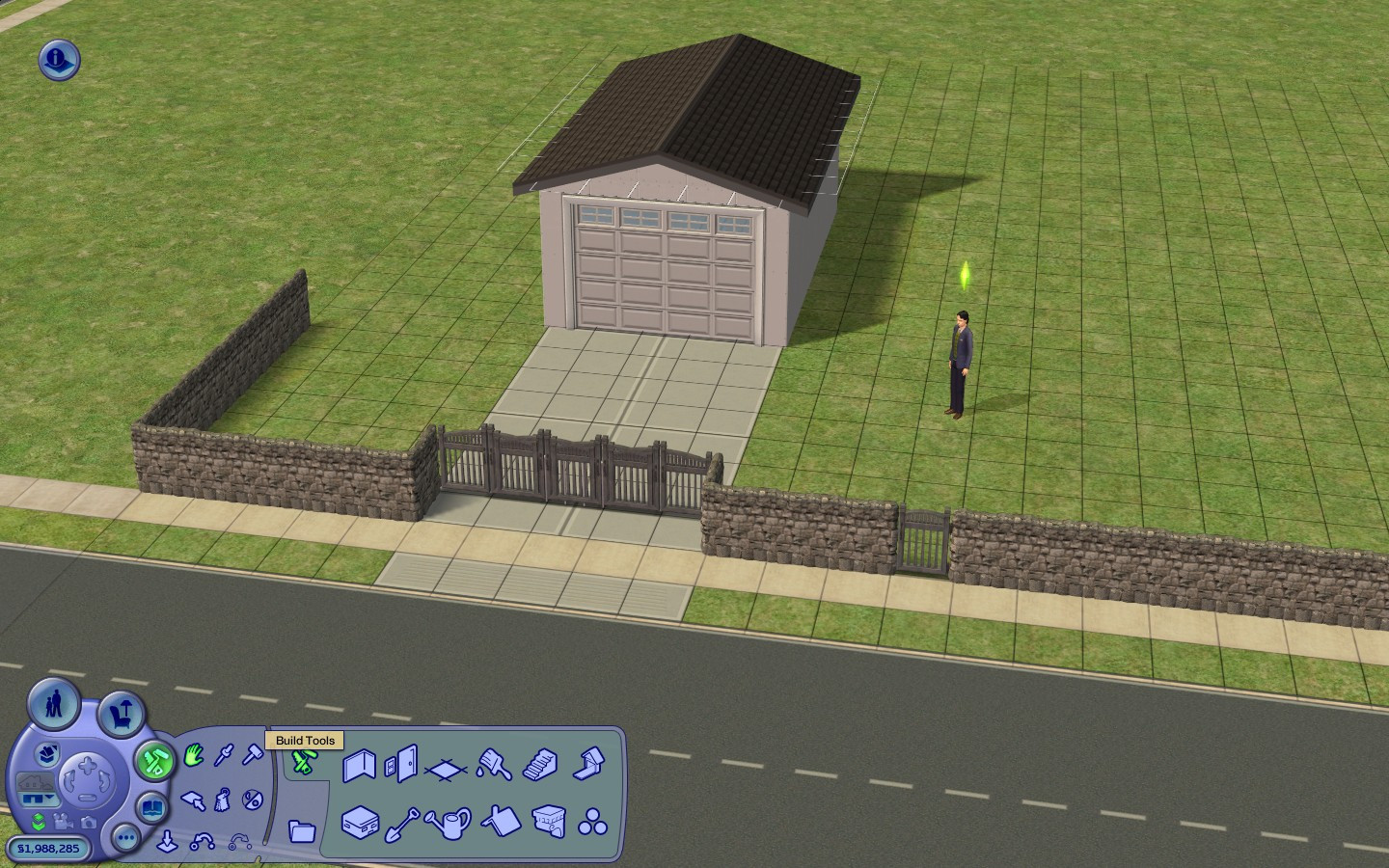 If a large/long vehicle is parked on the driveway, the end might stick through the fence: 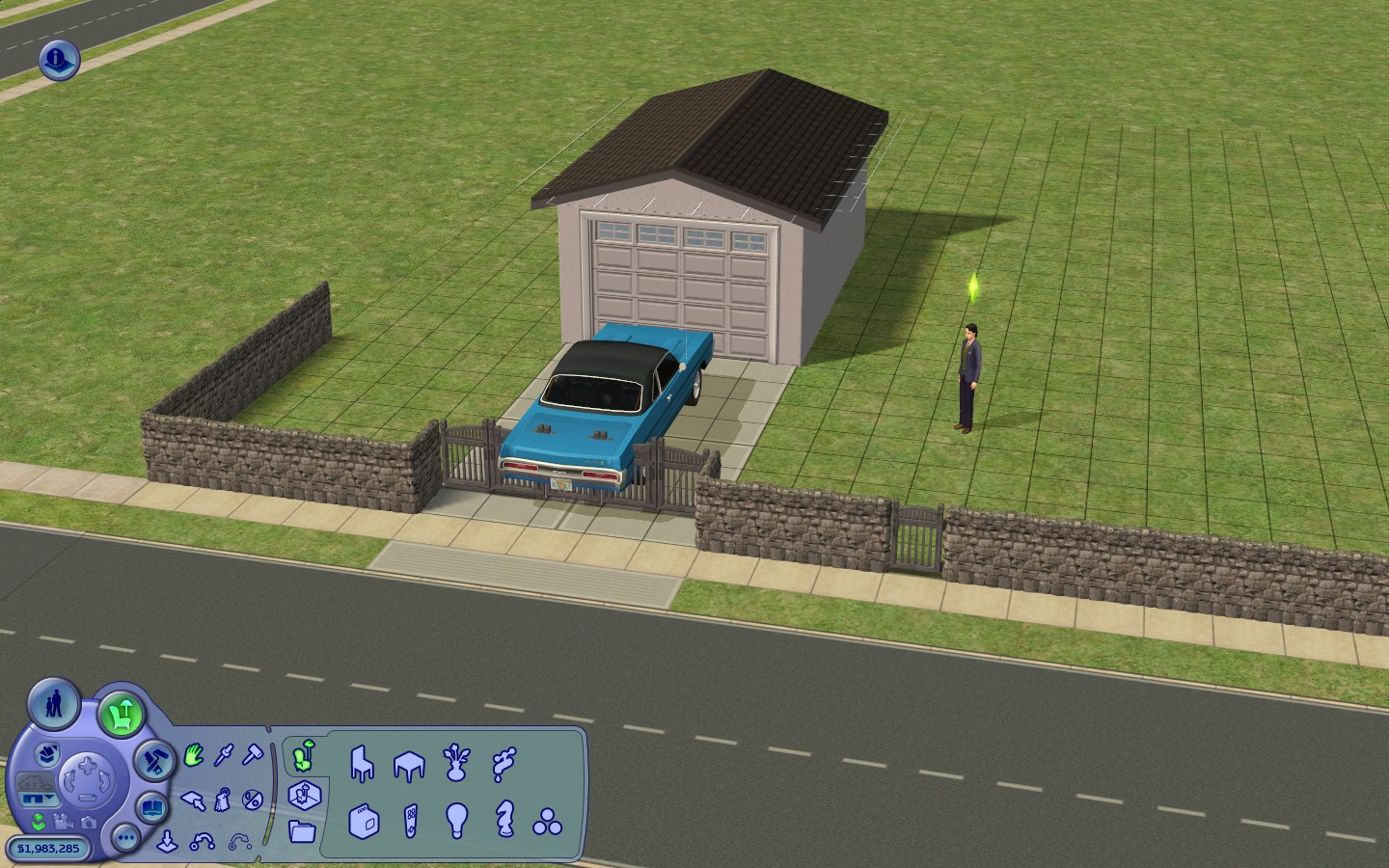 If this happens, remember that the fence does not necessarily have to be recessed, but could instead be drawn right along the sidewalk, which would visually accommodate most larger/longer vehicles: 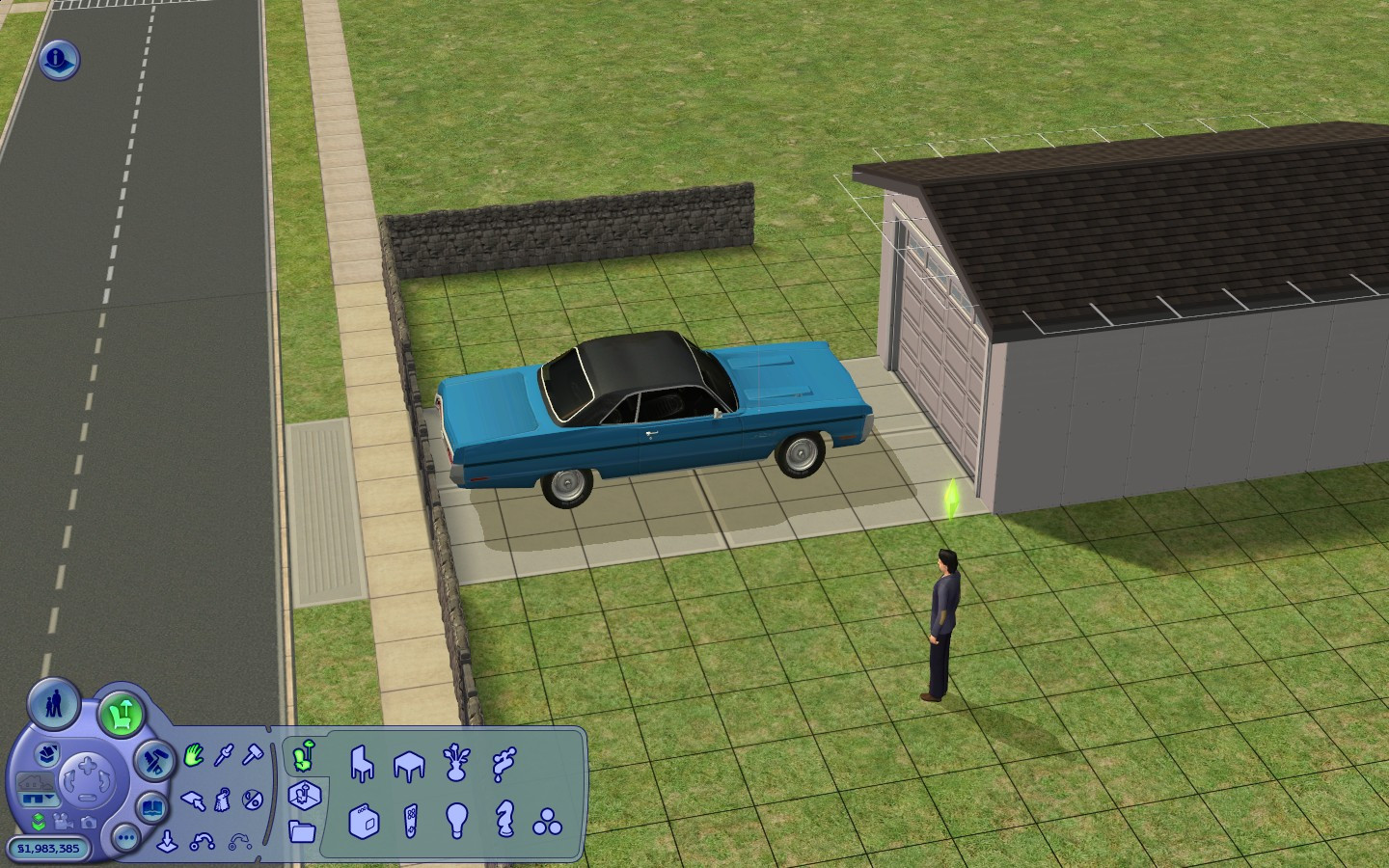 This is the end of the building portion of this tutorial.

How to lock the gates:

Once you've got your Sim family on the Lot, the gates are locked in the normal manner as any other door.
In the example above, there are 4 gate sections, each of which has to be locked by clicking on the 4 gate handles. Typically, you'd want to "Lock for all Sims" and "Disallow Pets" to completely prevent everyone and everything from using the driveway to enter or leave the Lot, forcing them to instead use the pedestrian gate.
You can test to see if everything is locked by having a Sim attempt to walk from one side of the gates to the other, thus revealing any gate sections that were not locked. If the Sim instead uses the pedestrian gate to get to the other side, you will know that all the gates across the driveway are locked.

Important note: There is one important caveat to constructing these driveway gates.
For a long time I couldn't figure out why the above procedure worked fine on my little test Lot, but not on a Lot I had recently finished building. The difference was that my little test Lot only had fencing across the front of the Lot, along the street, while my finished Lot was completely fenced in on all four sides, with no opening anywhere.
When you have a Lot that is completely fenced or walled in, this tutorial still works, but when a Sim is told to drive a car off the Lot, the Sim will freeze. At that point, the only way to unfreeze the Sim is to go into build mode and remove a square of fencing (or wall) somewhere around the periphery of the Lot. Obviously, this is not acceptable for gameplay. For this reason, it must be remembered to leave at least a one-square opening somewhere on the periphery of the Lot, if the entire Lot is otherwise fenced or walled in.
There are probably many different ways to accomplish this without leaving an obvious opening in the fence/wall periphery. Placing a hedge or two is one way to do it, as I did in this finished lot: 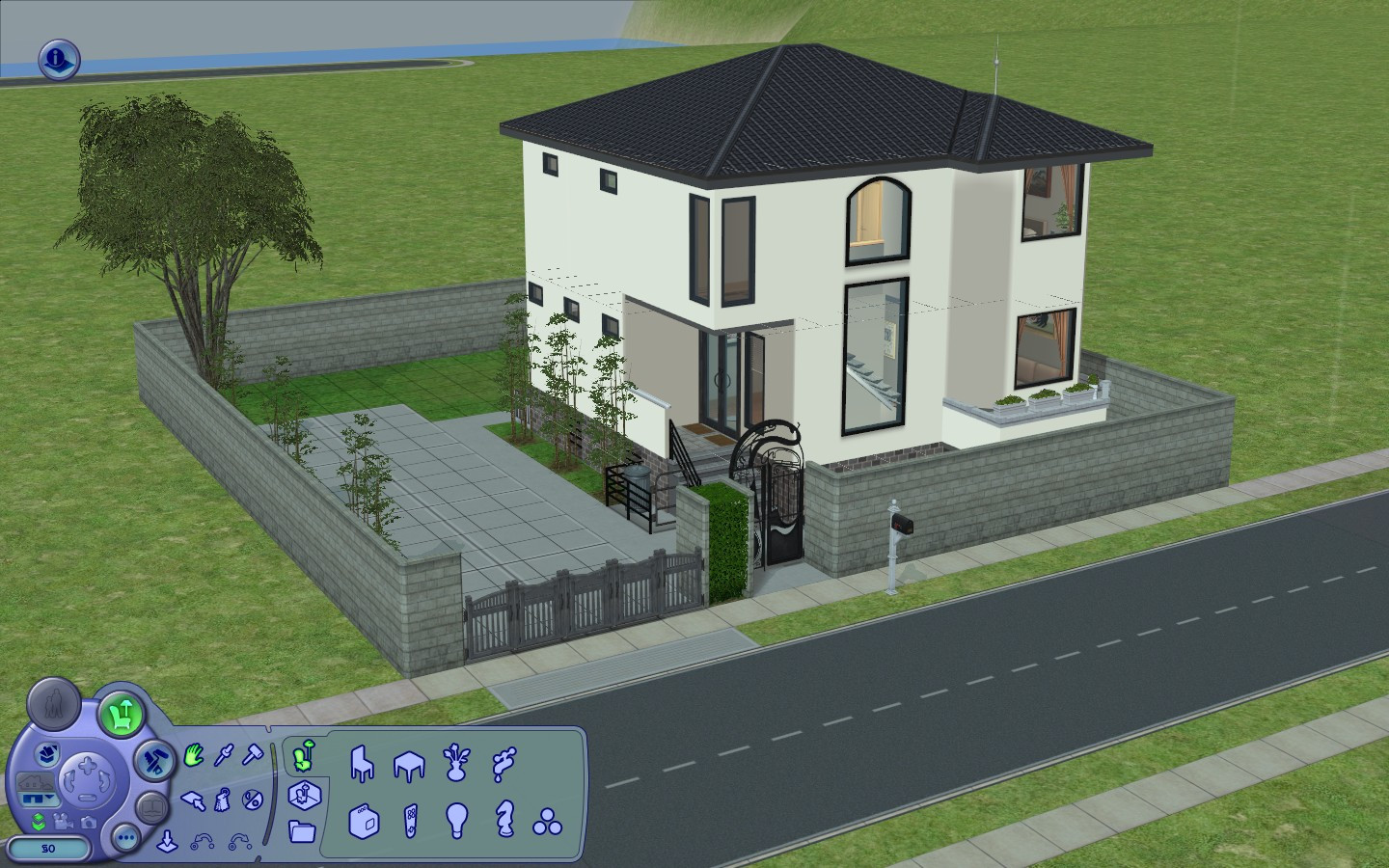 Note that the opening doesn't have to be near the driveway, but could be anywhere around the periphery of the Lot.

I have also noticed that, very rarely, a Townie will still enter the Lot at the extreme front left-hand corner of the Lot. I don't know what causes this or how to prevent it.

Hopefully this tutorial will add to players' building options and result in nicer and more realistic looking houses. 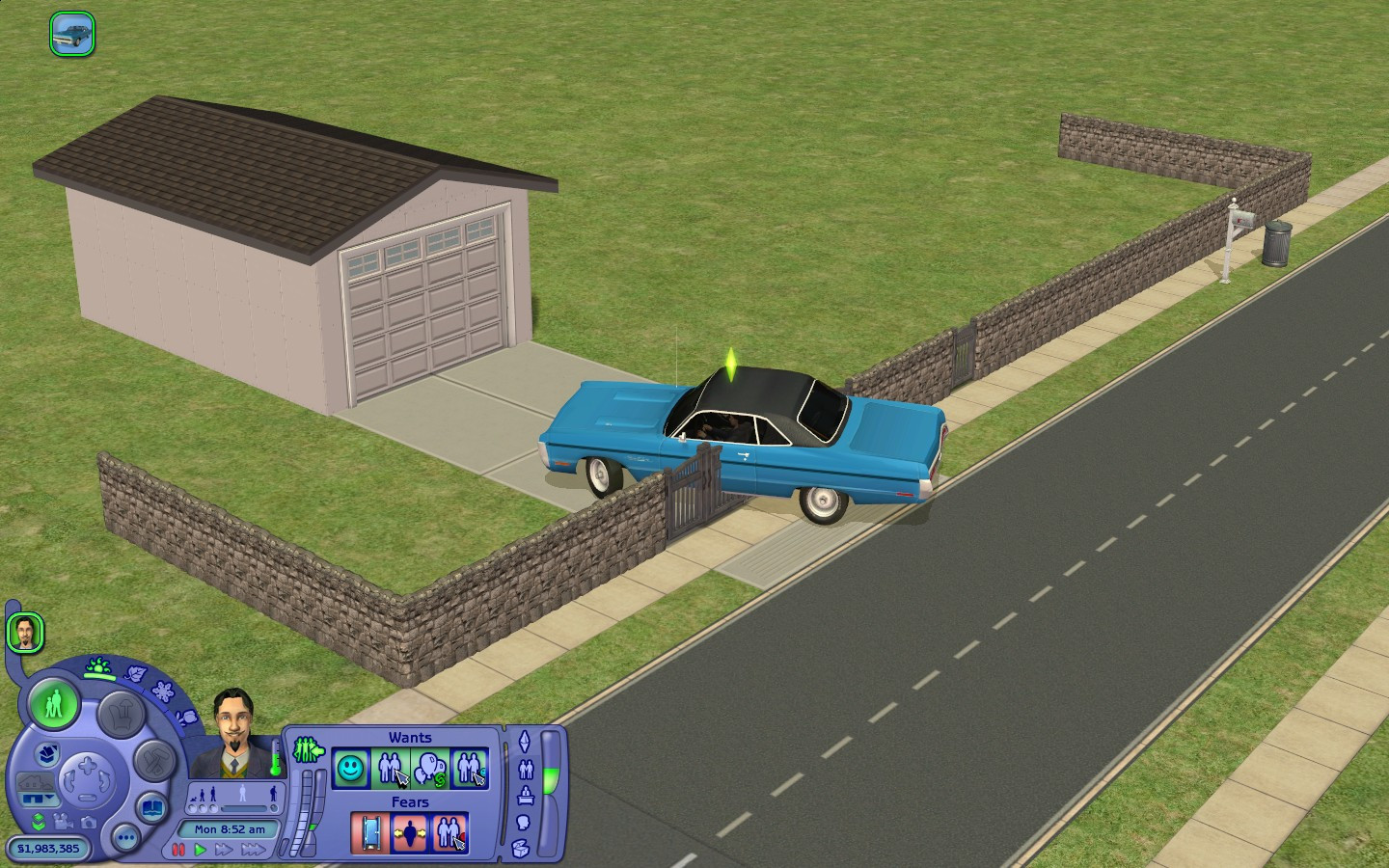 Addendum, 29Oct14: If you're wondering whether you can't just use the moveobjects cheat to place a row of fence gates (without an actual fence first) and then plop down the driveway - it won't work because the gates won't actually lock when it's all done. You'll get all the menu options for your Sims to lock the gates, but they won't actually be locked and Sims and animals will walk right through the gates.
There has to actually be a fence first, then gates, etc., just as I've shown above.

Addendum, 15Dec14: Another benefit of having the entire front side of a Lot fenced off is that the paperboy will leave the paper somewhere on the sidewalk, instead of some strange place on the Lot as they often do.
Advertisement
CatMuto

I know this might count as necro-posting, but I have a problem.

I did the above procedure and it worked just fine.
Just right now, I'm trying the same thing on a different lot - I'm doing two driveways like in your example picture, but when it comes to placing the driveway back after the gates are up, it won't snap. I have move_objects on active and I can add the extension and other things just fine, just the driveway won't snap. I don't have snapObjectstoGrid on, I'm sure of that.
I'm using the AnyGameStarter and am using my OnlyNightlife version.

Is it because of that?
My normal game, where it worked, had FreeTime as the other and latest expansion.

Firstly, sorry for being so late in answering this, but for some reason I was not notified of your post in my thread subscriptions.

To answer your question, all I can tell you is that, having recently returned to playing TS2, I'm running The Sims 2 Double Deluxe, with all EPs and SPs . I simply installed everything and as far as I know, my game is as up-to-date as possible.

I am really not at all familiar with the specific effect each EP has on the game, but from what you describe I would guess that the problem might lie in the fact that you don't have Freetime. And that is just a guess on my part.

All of the ins-and-outs of what works and doesn't work with the various EP's and SP's are a complete mystery to me.

I'm sorry I can't be of any help. Thanks for pointing out this problem though. I will add a note to the top of my original post to make players aware of this issue.

Edit: I just revisited this thread and noticed you said that you "don't have snapobjectstogrid on", which means it's off. Try turning it on, because having it off might very well prevent you from correctly placing the driveway. The only building cheat used in this tutorial is the moveobjects cheat. The snapobjectstogrid cheat is not used in this tutorial.
Back to top