Small Eyes, Wide Jaw Glitch.
Since the last update, my game is severely glitched. All my sims get the same wide jaw and small eyes upon aging. They all end up looking too much alike and weird with such small eyes and large jaws.

I can create them in CAS the way I want, but, as I age them up or down, the eyes and jaws revert to this default.

Trying to ajust this the eyes jump up into the forehead.

It's messing up all of my sims and it is vey upsetting.

After removing the entire Electronic Arts folder from My Documents and having repaired the game through Origin, I go to Create-A-Sim and ramdomise sims. This is what I get, six times in a row, not skipping any sim:

Hey, is it the same with females? Or children?
melbrewer367

I don't have the weird eyeballs way up on the forehead thing but I have an issue with small eyes and wide jaws too. I only have two kids that have aged up since the patch and they were twins. They both had really small eyes and really tight lips. Their dad does have a fairly wide jaw as he's got that Brawny/Lumberjack look on purpose so I didn't think anything of that. I had to fix their eyes and lips though. I'm getting ready to make some new sims now to add to the world. I'll have to see if they randomize the same way too.
melbrewer367

My female sim did it. In that second set of pics the OP posted, my girl had eyes just like the third guy. Her eyes were way more wide open and bigger before she aged up too.
kaichen04
Test Subject

It seems to affect males from all ages.
AliceSacco

Same here. Sims that were made directly as Young adult, look t6he Way i've made them, but when I try to age a sim that has been made from a teenager, becomes like that when young adult, and go back with his original features when he becomes adult. Is annoying.
Che il sultano mantenga le tradizioni nella propria terra, ma non tenti di imporle ad altri regnanti.
That the sultan may keep his tradition in his own land, but not attempt to force them on other rulers.
(Vlad Țepeș)
Scarity

This has been a glitch since day 1. Do not design a sim at an age you do not intend them to be. If you do, age them naturally, not in CAS. It only happens in CASE.
kaichen04
Test Subject

Okay. That doesn't really change anything I said. Modifying age in CAS screws up genetics for some reason. Known issue. Steps are easily taken to avoid it.
DrChillgood

Seems I get this when generating male relatives with Play With Genetics. Is this the new Pudding Face?
1/8/2016: New avatar! Pre-censored for EA's approval.
3/19/2015: Teens are too close to YAs. EA needs to either shorten the teens, or add preteens and make YAs look older.
lil bag2

Actually, this is happening everywhere, not just in CAS.

There is no way to prevent it.
Purity4

Quote:
I know this is off-topic, but please indulge me. I have always read about sims 3 sims being called pudding faces. I just don't get it. I know what pudding looks like. I played sims 3 and know what they looked like. I do not see the similarity. What am I missing?
glastduke2131
Field Researcher
DELETED POST
7th Oct 2014 at 3:35 AM

This message has been deleted by glastduke2131. Reason: woops
Katzgroovymeow

Hopefully this issue has been reported in the official Sims 4 bug thread.
lewisb40

It was reported and I sent a tweet to the SimGurus. There are multiple threads popping up about the same issue at the official site.
Resident member of The Receptacle Refugees
Let's help fund mammograms for everyone. If you want to help, Click To Give @ The Breast Cancer Site Your click is free. Thank you.
kaichen04
Test Subject

Many of people will have tio stop playing if this isn't fixed.

The thread you mention:

Wow..... have aged up four Sims since the patch. Can't say I have noticed them transforming like that though I have noticed that even before the patch my Sims tended to get small eyes when aging from teen to YA and then they get bigger again when they age from YA to Adult. I thought it was done this way in order to distinguish Teens and YAs.


EDIT: OK screw that, just tested it, it seems to happen. The sims I aged up were three female simd and it doesn't seem to happen with them and one male who already had small eyes and a square chin.

I can sort of see where this (and the pudding faces/effing identical and permanently stoned looking children of Sims 3 infamy) might be coming from: in Sims 2 two normal looking Sims could produce horrifying looking demon spawn (especially toddlers and children) because the different parts of the face the child had inherited from the parents clashed (and often what looked like pleasing features in on one gender produced over-blown grimaces in the other)

In Sims 3, I think, they tried to remedy this by making the Sims less varied (especially the children)
In Sims 4 they tried to make the Sims look more varied again but I noticed by creating a few children of Sims in CAS using the mix genetics button that this could once again create some pretty homely Sims so I'm worried they tried to "fix" this with small eyes and lantern jaws....

Oh god Maxis don't screw this up and make the Sims as samey as in Sims 3....
....so says the Phoenix! ♥ Receptacle Refugee ♥
AliceSacco

I remember I hadn't the problem when Sims 4 come out first. The problem happened after patches.
Che il sultano mantenga le tradizioni nella propria terra, ma non tenti di imporle ad altri regnanti.
That the sultan may keep his tradition in his own land, but not attempt to force them on other rulers.
(Vlad Țepeș)
KariMinger
Lab Assistant

Quote:
Definitely. And I'd say one of the two most recent, because the firstborn of my legacy family's third gen looks fine, as does her brother, but her cousins (born/adopted the next sim week and maybe a few real days after) all have squinty eyes. They are born after the 10/1 patch. I'm not sure how many days before that the first two kids were. Not more than a realtime week.

Particularly disappointing as my founder had almost anime-type eyes.

And I don't dare edit them in CAS because if I do, their mom & dad will become their sister and brother. I already had to age up and dump one child because of that bug...even after changing the relationships to the correct ones with a cheat code, on lot reload it was back to the incorrect relationship and mom has the Big Happy Family aspiration.
kaichen04
Test Subject

I noticed this too, and I made a thread a few days ago both here and the bug forum. It REALLY needs to be fixed ASAP.

And this isnt what EA intended at all. Below, you can see how my Sim aged before the patch. Not only that, I took an adult Sim in CAS and aged him down to teen and adult, and he looked NOTHING like he was supposed to. The game literally overwrites the Sim's appearance with this bug. This can affect genetics. How the last Sim aged *BEFORE* the patch: Ok, from what I can tell in CAS at looks like ALL male ages have this issue. I tried a couple tests, aging a child to a teenager, seeing the eye and jaw glitch, correcting it manually, aging them again, and the jaws protrude out and the eyes shrink over and over and over. No matter how many times I corrected it, or at what age, it would all change on the next age up.

Here are some of the pics below...

This child was born to my main sim family so I brought him into full edit CAS: 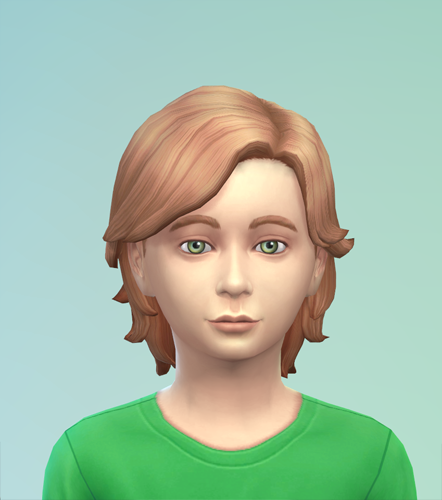 I aged him to a teenager and his features are too blocky and nothing like his parents or brothers before the patch: 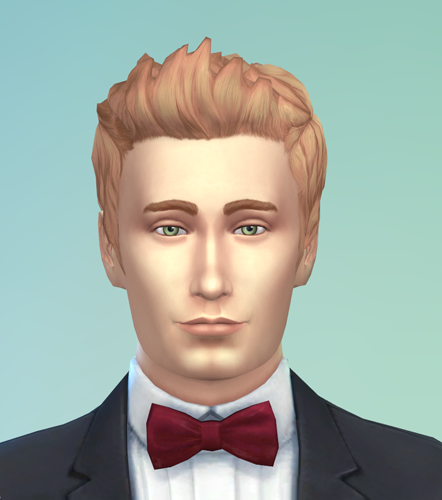 I then altered his appearance with more of what his parents and siblings have looked like: 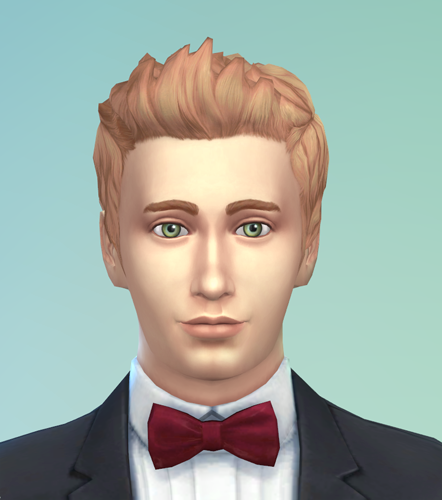 Then I returned him to the child state and jumped back to teenager and these facial features stayed. So then I jumped the above teenager image to YA and his features, lips too I have noticed, all changed again. It seems like all their lips thin out also: 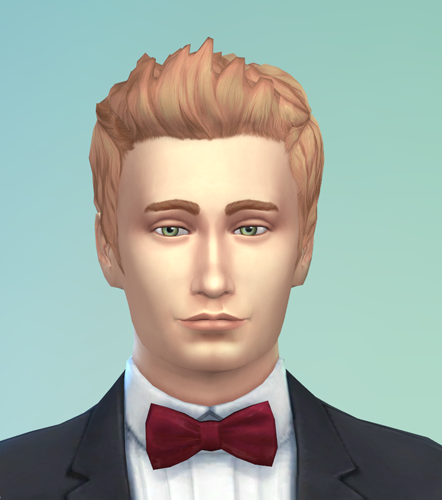 Then I altered the face AGAIN (setting him back as close as I could to the teenager look), at this adult stage before making him an older adult, this is how he looked right before aging him again: 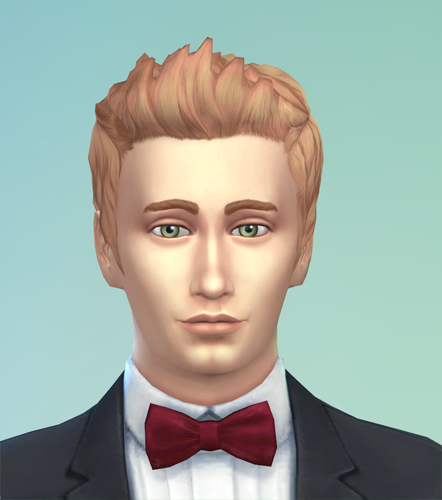 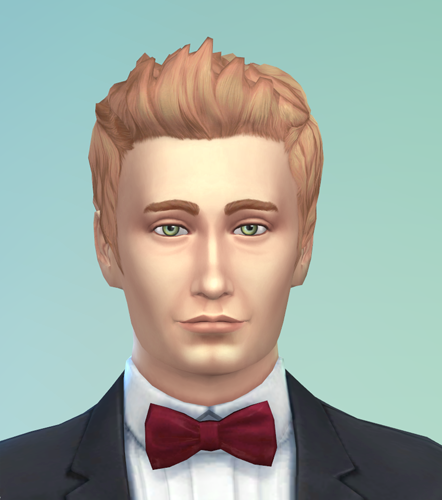 So it seems most of his genetics are thrown out the window with every age change, and he gets smaller eyes, broader jaw, and thin lips. It's annoying the PLUM out of me!

Alexander Goth just aged up to a teen in my game, and it's not pretty.

I snagged this pic of him from another thread. It's how he aged up to teen in someone else's game, pre-patch:

Not only did his jaw widen, but his whole face seems to have lengthened, too. Ack!

That's exactly what's happened to my female child Sim. Her father was affected with boulder-jaw and squinty-eye syndrome. Unfortunately for her, she took after her father's genes and ended up looking like this. Yeesh if the eyes are supposed to get smaller as she ages, I'm scared to see her as a teenager. Will she even have eyes?

Thanks for bringing this issue up. I had no idea this happened. My sims are so close to aging up, so I'm glad I found out about this! Here's my picture contribution. Same problem here.
I aged my legacy 2 gen heir from child to teen a couple of days ago... guess who resembles more Dylan McDermott than his father now?
eskie227

I do see the issue with the beady eyes and squared off jaw in your examples, but honestly, in your version of Alexander Goth, it's not the beady eyes and jaw that makes his appearance so concerning, but the bifurcated nose is really freaking me out. Really. I've seen collapsed coke noses that weren't as caved in as that.

But yes, it does appear the faces do "reset" to some arbitrary value rather than propagating "properly" across age transitions.
youngvulcanoes

This is happening to me too. I don't even see how this bug could've happened in the first place.
Katzgroovymeow

The gurus know the situation and are looking into it.
Back to top